You're not alone, and everything is broken. 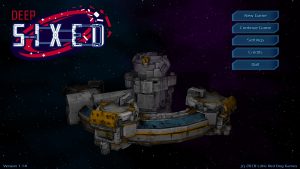 Deep Sixed is a rogue-like space sim that sees you piloting a broken-down ship in service of the Astra Corporation, who purchases your contract after being sentenced for criminal negligence. And while a few lines of dialogue hinted at the possibility of escape, I never came close to ever smelling freedom, even after turning on easy mode. Out in this nebula of space, it’ll take more than just your wits to survive. 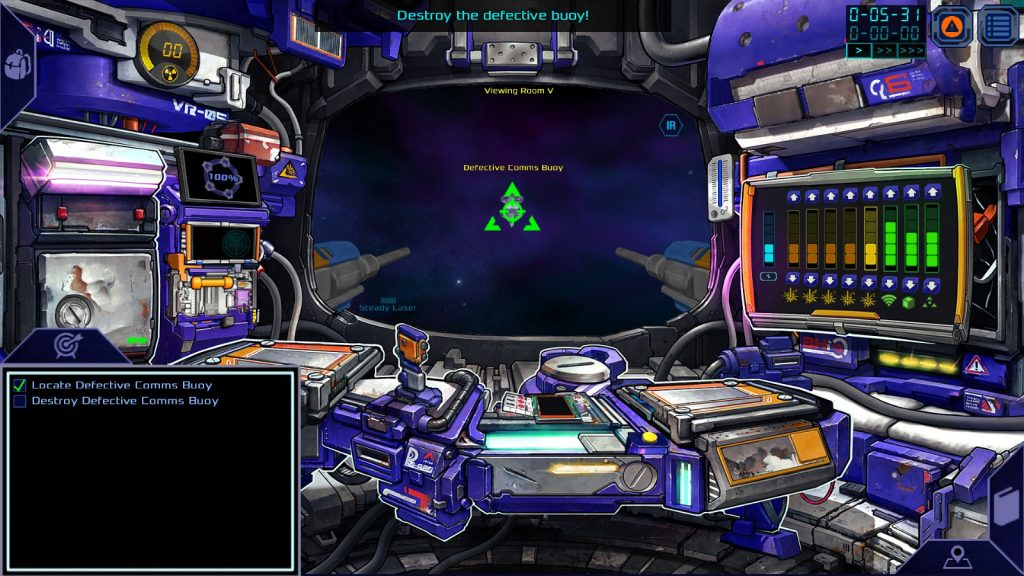 Deep Sixed has you defending your ship from various fauna with lasers; occasionally chunks of your enemies are left floating in space. Also when you fail, the game gives fairly tame descriptions of your death, often with the corporation ruling it a “negligible suicide.”

Deep Sixed sees your character being punished for becoming lazy and complacent. Once aboard your ship and working, you are encouraged to do well by the tangible rewards, and the company’s growing stock whenever you succeed on a mission. Themes of working hard in spite of your bad circumstances, or remembering to work like you’re working for God and not your earthly/interstellar masters immediately come to mind.

The first time I died while playing Deep Sixed from LRD Games, I failed to locate a leak in Room 5, leading to my character’s asphyxiation. The second time, I made a snap-decision to hyperjump to a nearby sector to escape a swarm of attacking space-bats, only to land in a black hole and have my ship torn apart. The third ship was lost to a broken scanner that I had no repair parts for, keeping me from finishing the mission—which would have yielded the necessary parts had I been able to finish it. The 4th time, space eels latched onto and destroyed my ship. And the 5th time, my character froze to death a split second after fixing the life support system. In each instance of death, by the time my character perished, multiple things were broken or in the process of breaking on my tiny, circular ship.

While in first-person, Deep Sixed makes you do things like recalibrating lasers and rewire consoles as you strive to keep your ship and its components running, sometimes with literal duct tape.This sounds like it would be fun, but it plays out like a game made by someone who repaired copiers early in life before switching careers into programmer. The game makes you consult an in-game field manual for almost everything, as nothing will come easily – pressing the wrong buttons can lead to broken programs or systems (I once disabled my hyperdrive by clicking a button I shouldn’t have). Repairing your ship isn’t done badly, in fact it’s pretty realistic to the point of having to disable certain functions so you can reinstall drivers. The problem is, when you have to do this while under fire, and the life support is broken, and the radiation level is rising, and the ship is spinning because of a broken thruster…one problem quickly becomes multiplied in this game if you don’t fix it immediately.

Graphically, the game isn’t thrilling; you move around the ship by clicking on the rooms and the game instantly moves you there (Think Zork). The rooms themselves look like a cluttered hidden-object game, but they do thankfully include the option to press a button and see all the interactive items in the room. A lot of time will be spent moving between the 8 rooms: Scanner room, Hyper drive room, Reactor room, and 5 near-identical Viewing rooms. These viewing rooms are where you’ll use the lasers, collect rare materials, photograph wildlife, collect and manufacture chemicals, and contemplate your fate while staring into the blackness of space.

There’s a lot to do in your rundown ship, but the sad truth is most of the time, it isn’t fun to do. Looking in the ship’s manual to repair the scanner is no different than looking in your car manual to change a headlight. Recalibrating the often-misaligned lasers also demands consultation of the manual in order to flip six different switches to attain a certain color scheme. Deep Sixed can also be punishing to the unprepared. If you get stuck out in the black without a backup part, you could find yourself in a dead spiral and unable to complete the mission or continue. 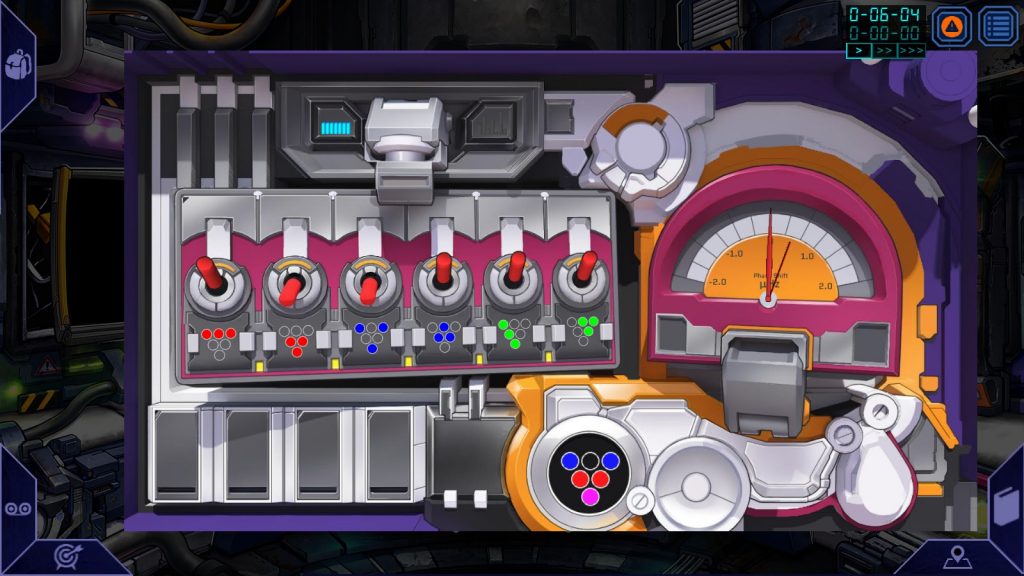 Flip the switches to make a certain color scheme in the bottom middle. In the manual you’ll see what ones let you realign the two dials on the right.

The writing deserves a mention. Even though it was somewhat hit-and-miss, while the game over screens are a humorous salve by explaining how I died and what the Astra Corporation ruled as the cause (usually a negligent suicide), I expected a little more out of the main character. It is refreshing to see the main character as someone other than the typical standard white male, but I would have expected her to protest or have more to say about basically being sold into slavery. Really anyone would have protested more. The main character’s attitude can be summed up as, “I work for Astra Corp now? Probably forever? Oh ok. Now what?”

Rogue like games are hard, and usually the deck is stacked against the player. What I didn’t like about Deep Sixed is that it makes you consult a manual constantly to assess what to do next. Nothing is intuitive unless you’ve played several space sims before. The power interface and how you add or subtract power to different ship systems is very reminiscent of FTL, but the comparison stops there. The deck is stacked here, and you have to look up how to flip the cards over one by one. The game has entertaining moments, but I feel like most will want to look elsewhere. You could always volunteer at your local Kinko’s fixing the copier—you’ll spend about the same amount of time reading a manual. 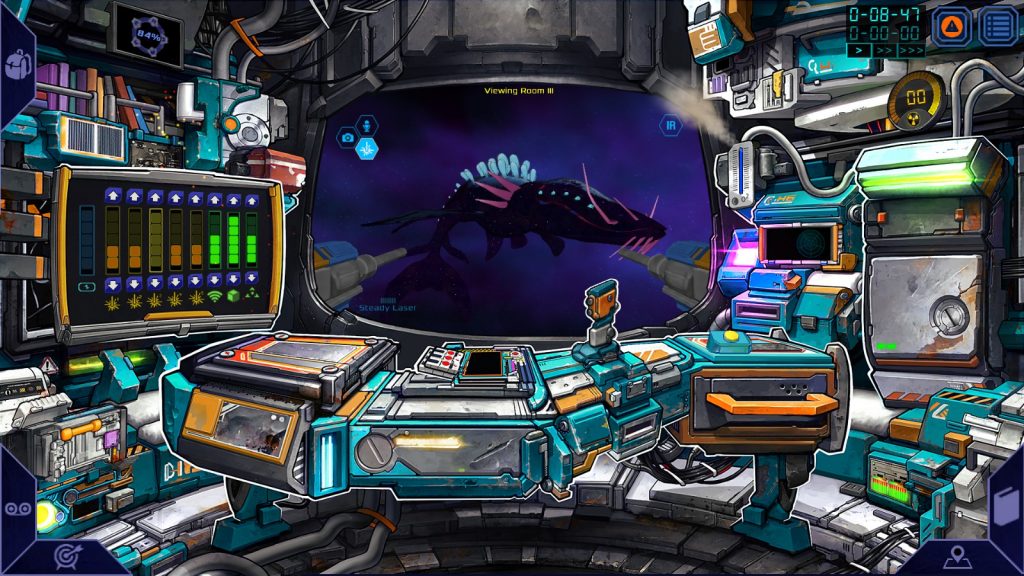 Space whales. Why did it have to be space whales?

Deep Sixed tries to make realism fun, but it ends up falling short. Some people will find it fun to try to fix wires and replace broken computer parts while being attacked by space whales and losing air from your ship; others might see a copier repair manual attached to a last-gen seek-and-find game. This game is not for everyone.