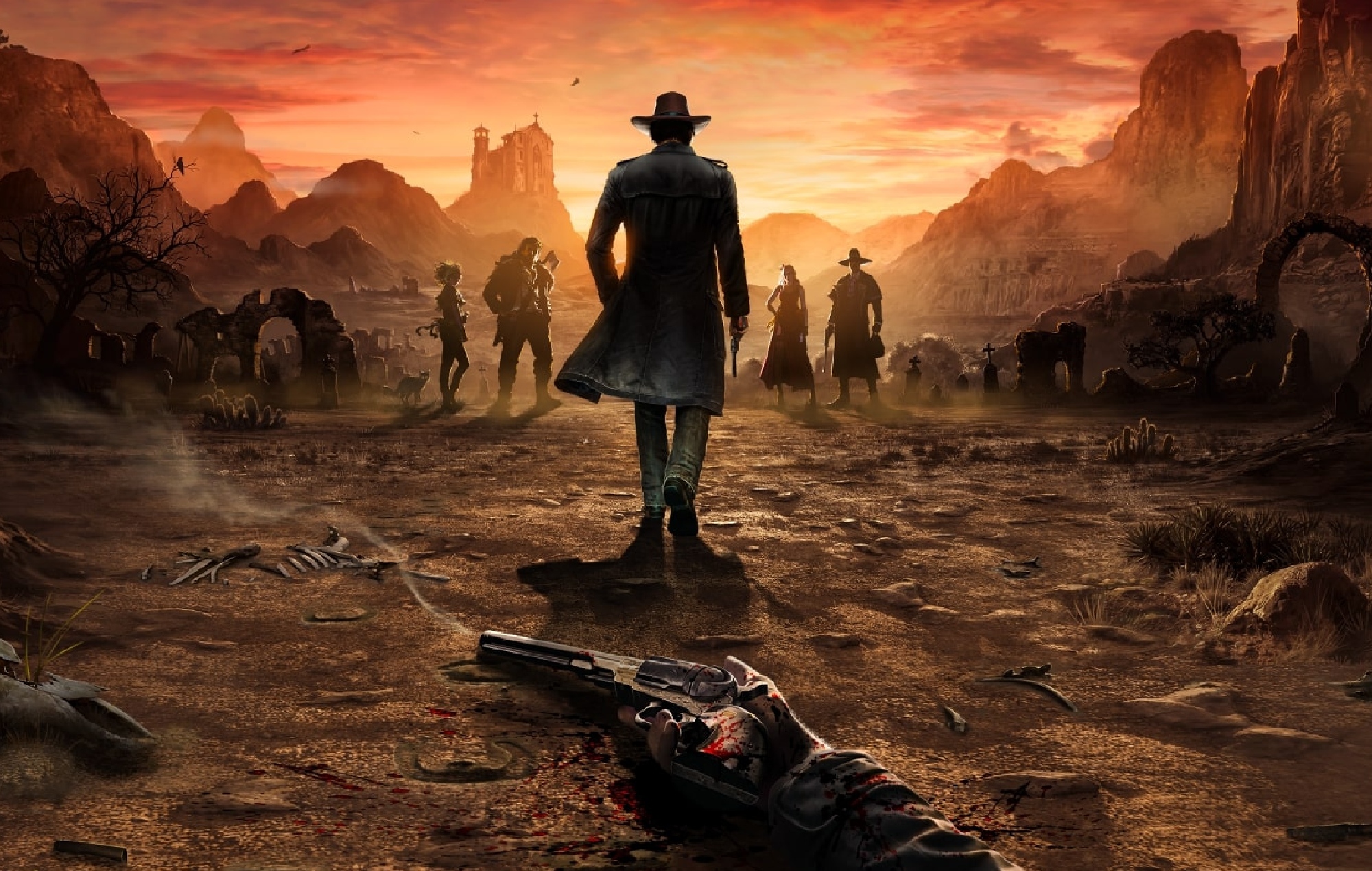 Everyone likes to cheer for the underdog, but how about a comeback story for an underdog? I love reading developer “postmortems,” or developer reflections after a video game release concerning what went well, and what could have gone better. Mimimi games practically died after Shadow Tactics Blades of the Shogun. Despite being a small independent developer, they uncompromisingly refused to cut corners, such as cutting levels and offering them as DLC later, or releasing a game that lacks impeccable balance.

Shadow Tactics reviewed well, but positive reviews did not immediately translate into sales, because marketing a game during the Christmas season is tough. Worse, in the gaming industry, developers recuperate costs (and please publishers and shareholders) in a heavily front-loaded business model reliant on sales during the first thirty days. 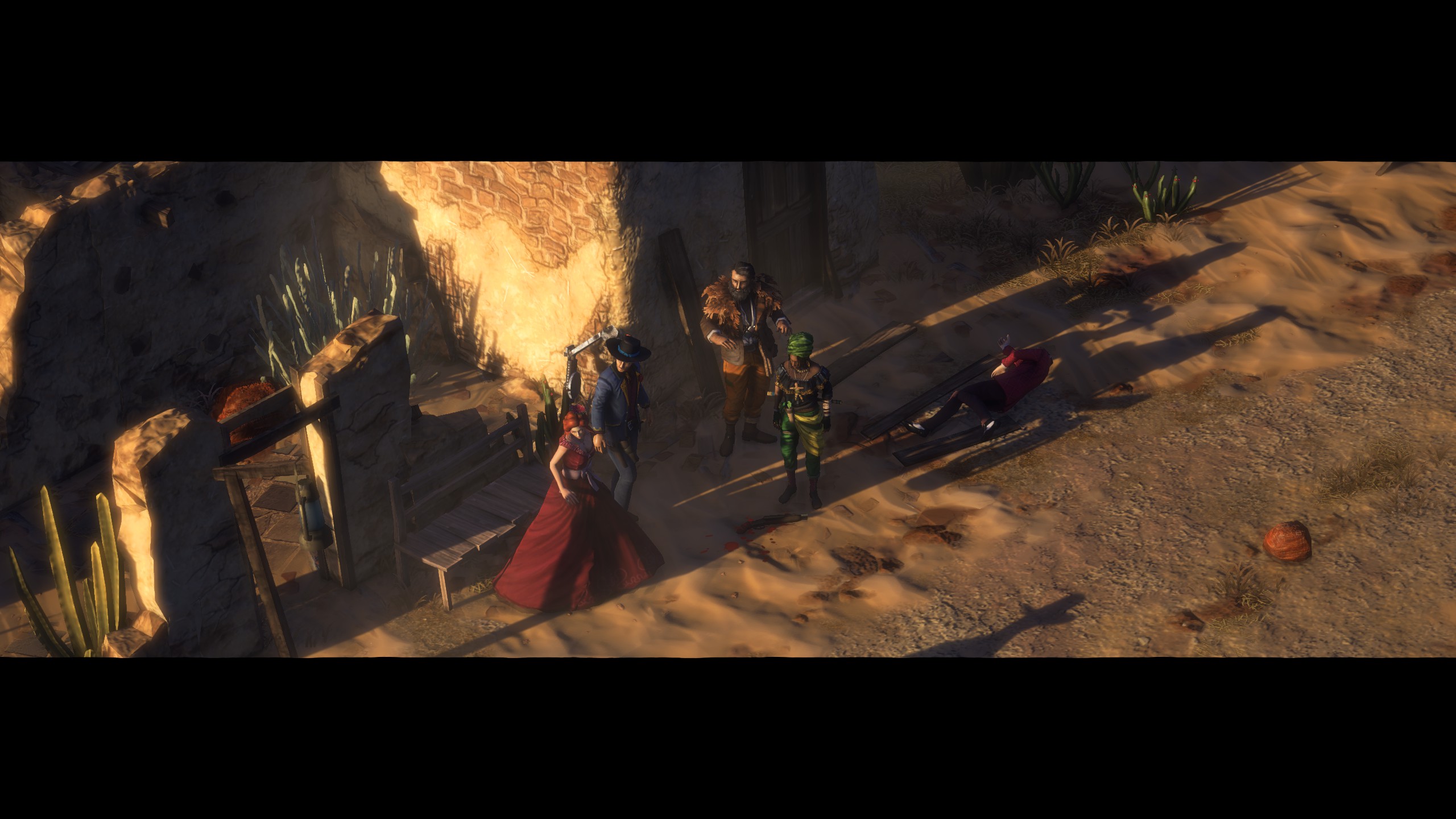 I knew about Shadow Tactics upon its release, but I shamefully purchased the game at launch but did get around to playing it until almost a year afterward. Even a big fan of the ninja and samurai such as myself failed to gas up Mimimi’s accomplishment. Word of mouth, discounts, and Humble Bundle revived and catapulted Shadow Tactics into the gaming industry’s mindshare. Most of us old school Commandos players remember its grueling difficulty (if not cheesed with pistol cornering), but Shadow Tactics offers not only adjustable difficulty, but also a ton of challenges (achievements) for tacticians and speedrunners alike to pursue. It is an outstanding game in its genre, And those who are reading this review who have yet to play it need to stop right now and buy it. 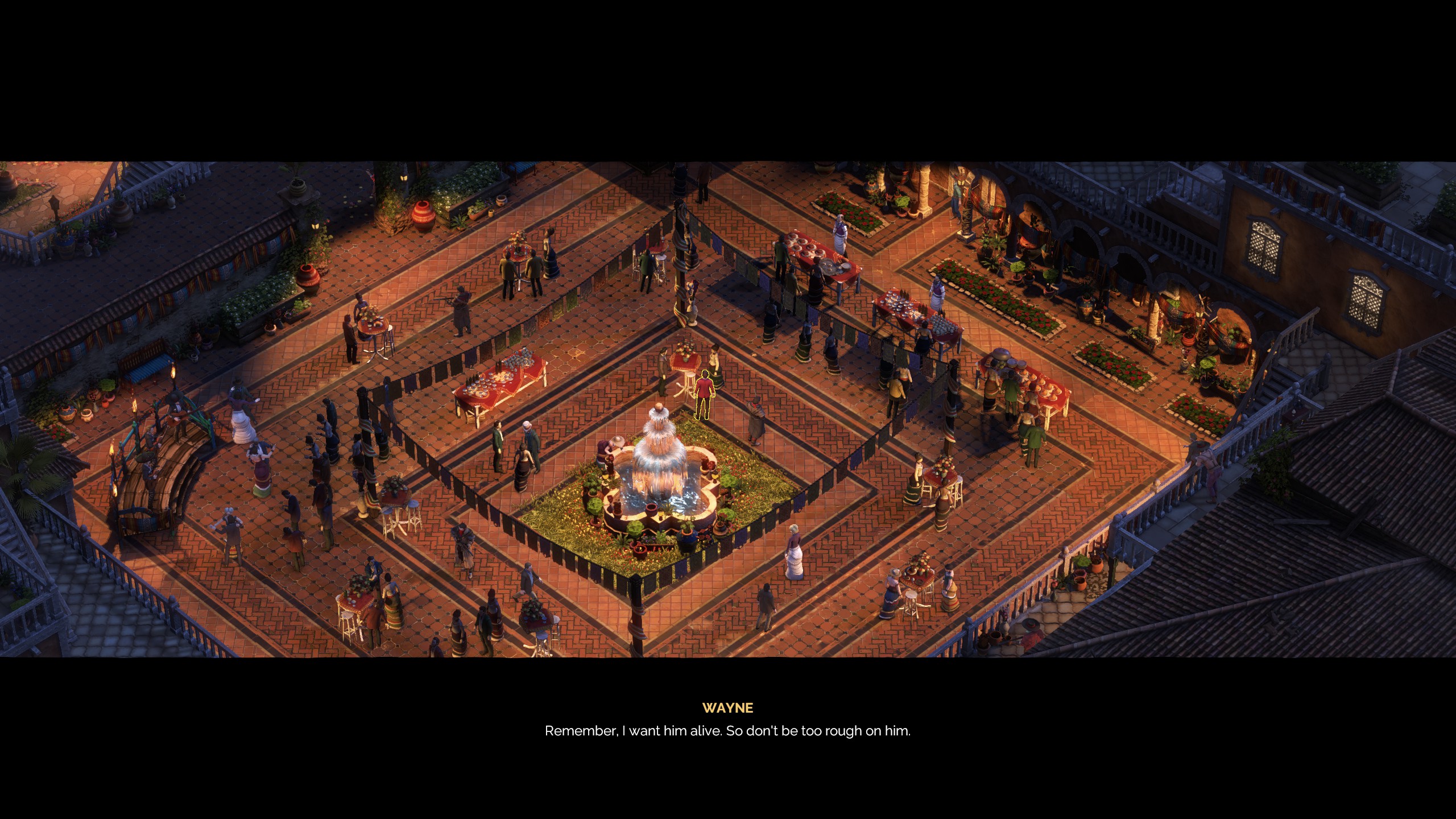 When Mimimi announced that they would be developing Desperados III, no one was surprised that they would reprise their role as the leading tactics developer outside of Firaxis Games with XCOM. Expectations were high. They could not rely on the coolness factor of medieval Japan, but would have to convince players that cowboys in a western are just as cool as elite World War II soldiers or ninjas during Japan’s Edo period. I was exceedingly skeptical, given the highly problematic depictions of indigenous people as antagonists within the genre. Yet because of Shadow Tactics, in Mimimi I trust. 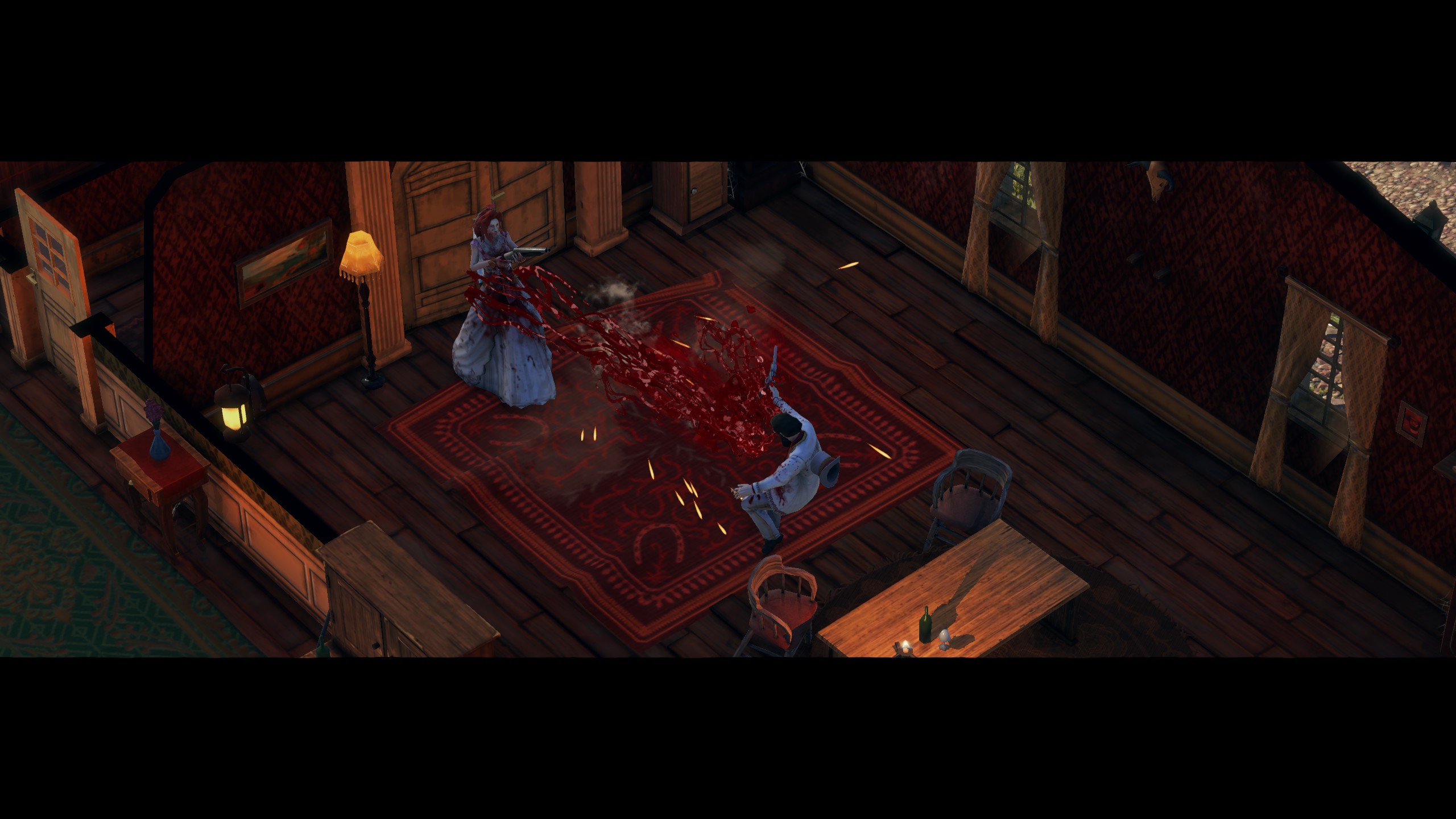 Say hello to my lil fren

As with Shadow Tactics: Blades of the Shogun, violence a core game mechanic. Even if one is dedicated to non-lethal means of eliminating targets while clearing a map, some targets will require a sharpshooter to clear. When cut or shot, enemies bleed, naturally. It is also possible to crush bogeys with a boulder, or incinerate those who walk too closely to pools of oil. 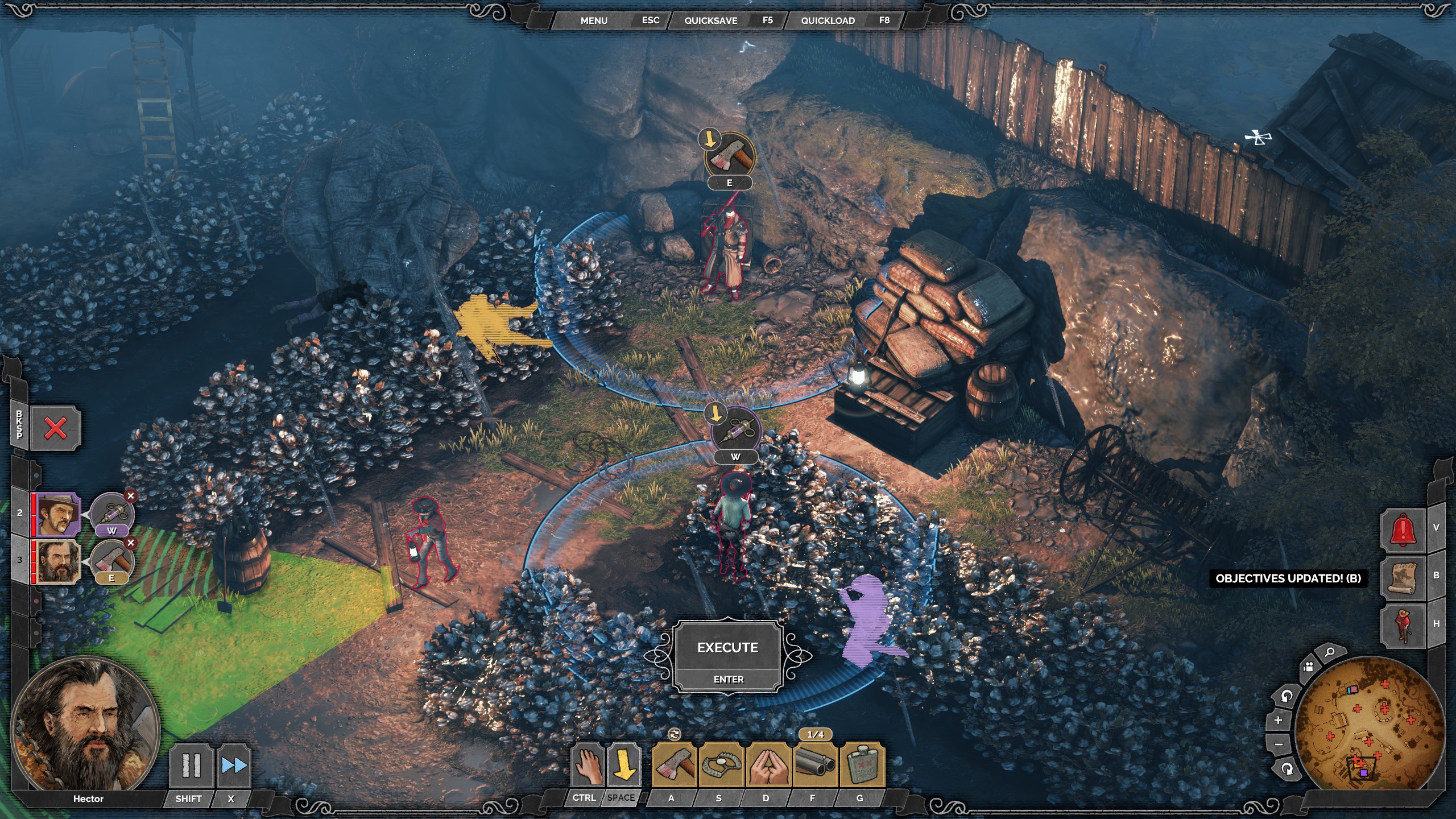 Unlike Shadow Tactics, the language is notably coarse. Characters are as likely to practice courteous etiquette as they are to cuss and carry on. While F-bombs are infrequent, do not be surprised to hear a few. Characters are certainly reliant on words like “s***t,” “b***h,” and “d**n.” 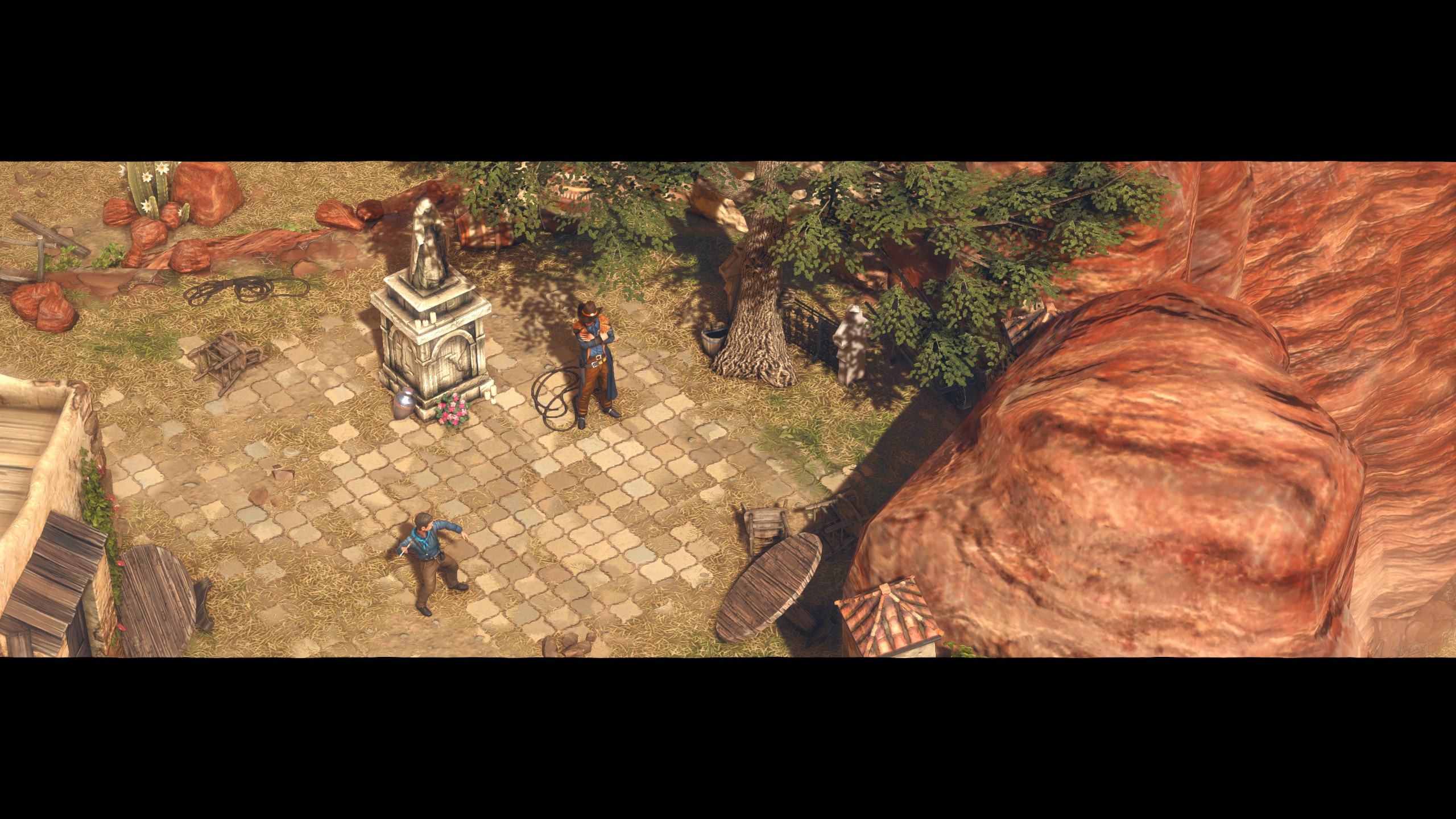 During the Desperados III prologue, a young boy accompanies his father on a stealth mission to Devil’s Canyon. They sneak onto a compound, the boy distracting sentries with rock throws, and the father silently inflicting lethal stablings and knife throws. Before they reach their destination, the boy stops and asks his father for a gun. The father says that the boy must first master the knife throw from twenty paces away before picking up a revolver. The boy stays behind to practice his knife throw on a tree while the father proceeds toward his destination, but fails to return. After some time, the boy searches for the father, and finds him in the custody of an outlaw named Frank. Desperate to save his father from the outlaw’s clutches, John picks up a nearby spare revolver, and challenges Frank to a duel, old-school style. Frank cooly dares the boy to shoot before the scene cuts to black. 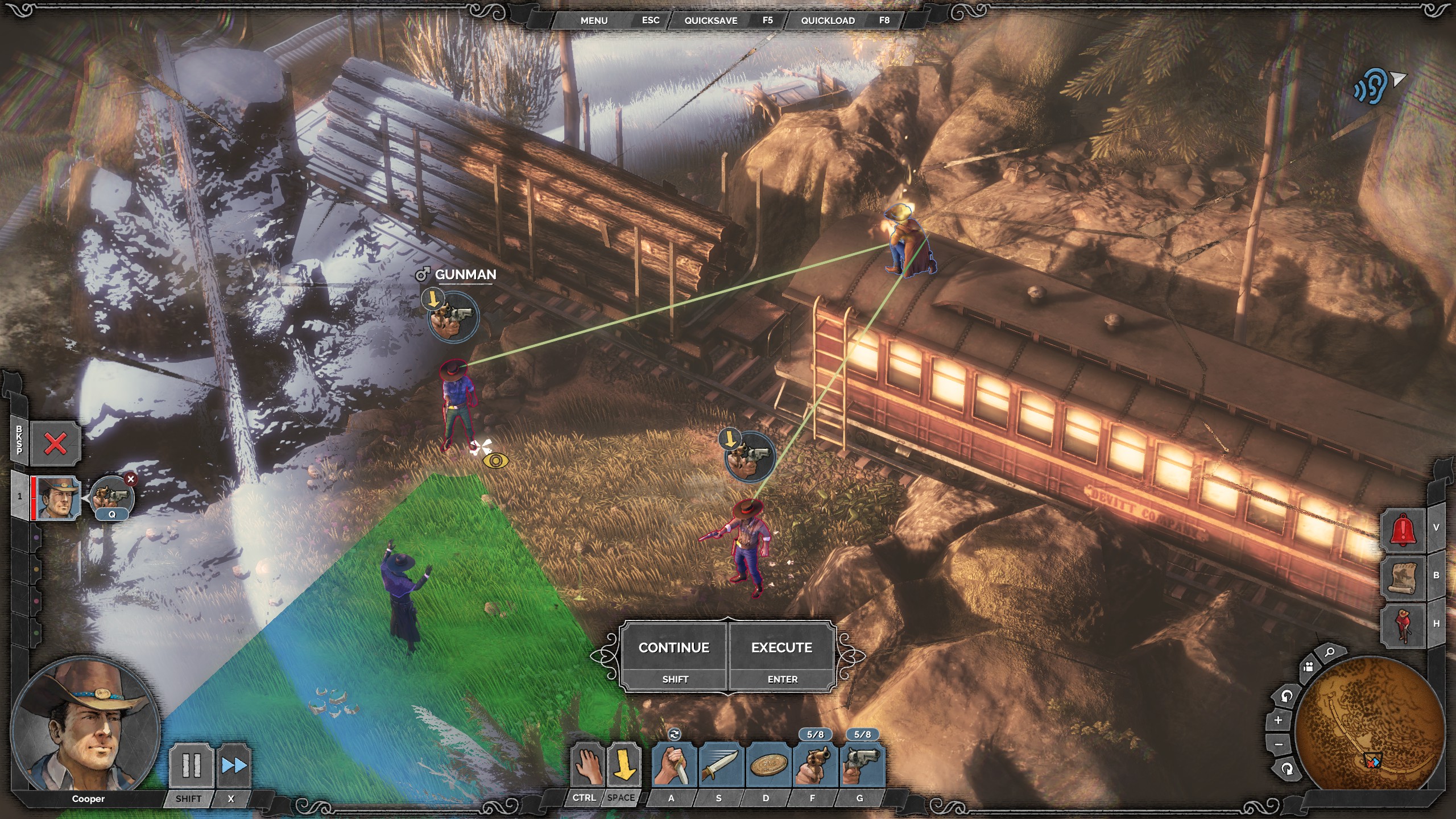 Queuing up commands to execute simultaneously. Necessary, because guns are LOUD!

A prequel to Desperados: Wanted Dead or Alive, Desperados III involves (an older) John Cooper’s journey to hell and back to avenge his father’s death. Along the way, he meets and makes some friends, rounding out his posse. John takes a train to the town of Flagstone, but bandits bring the locomotive to a halt. As he is in a hurry, John investigates and retakes the train, but not without the help of a sharpshooter by the name of Doc McCoy. After restoring the train to its schedule, they part ways. John meets his ‘ol buddy, ‘ol pal,  a muscleman named Hector Mendoza, who tells him that Frank is at the mayor’s house. John heads there and infiltrates the mansion, only to find one Kate O’Hara holding a shotgun in a bloody wedding dress, standing over the mayor’s still-leaking corpse. They agree to escape the property, and go to the O’Hara ranch, because the mayor had sold this property to the DeVitt Company to whom Frank is somehow connected. Rumor has it that Frank was last seen in New Orleans, and, well, I hope my readers are noticing a pattern here. 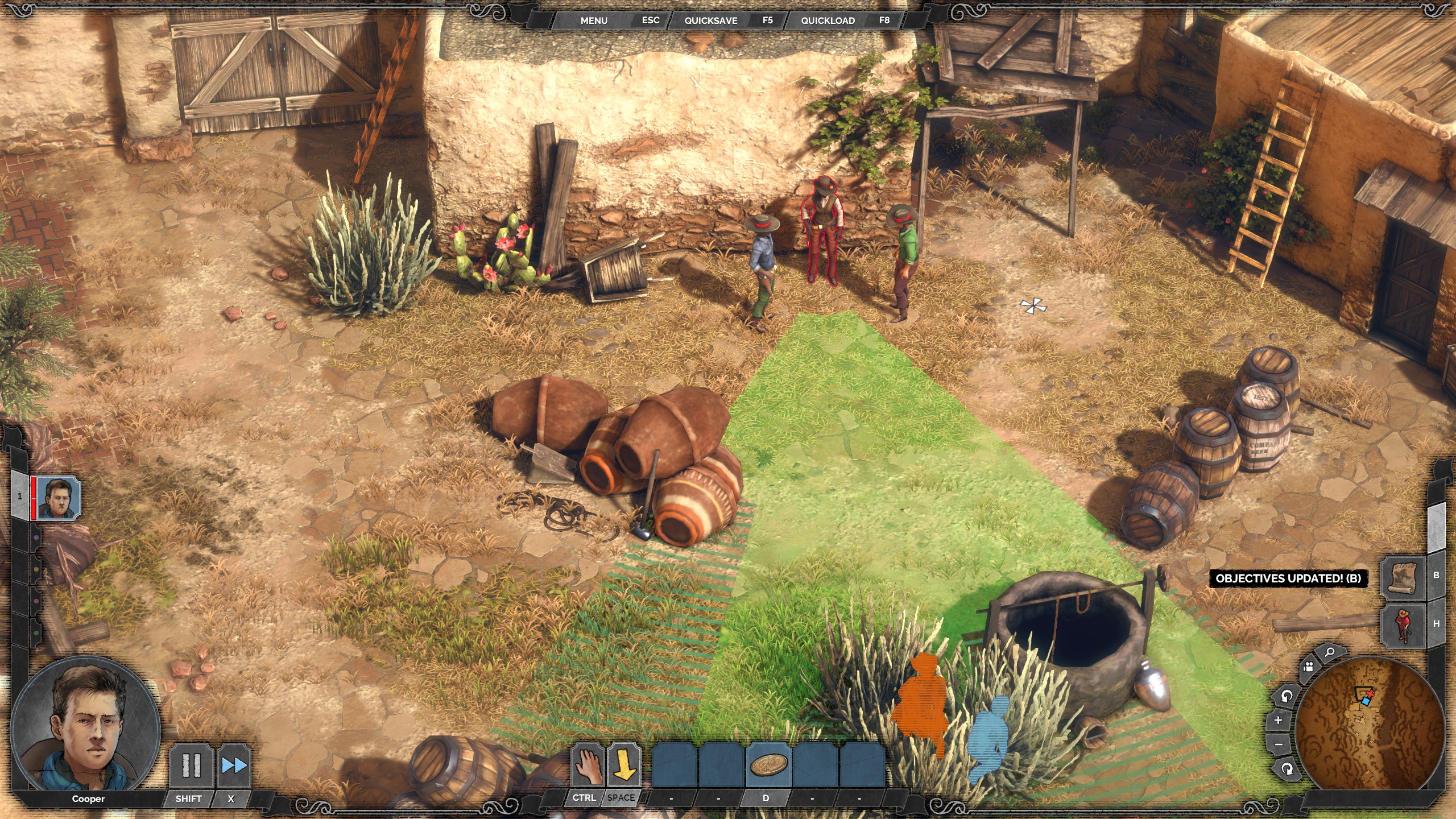 Early game screenshot because I was shocked by the melanin!

As “Your princess is in another castle” as this adventure may sound, I am delighted in the fact that Mimimi Productions conceived creative ways to plausibly get John’s posse to travel around, making space for a variety of maps. There are no barren deserts that can be found here; the developers have painstakingly crammed every location with detailed buildings, indoor infiltration, civilians, and even animals like bulls! Given that Rockstar provided a template for crafting a spectacularly-scaled world through how the frontier of Devil’s Canyon gives way to the modernity of New Orleans in Red Dead Redemption 2, I can see Mimimi taking notes while scaling down a sandbox game into a tactics game to be enjoyed in bite-sized pieces. 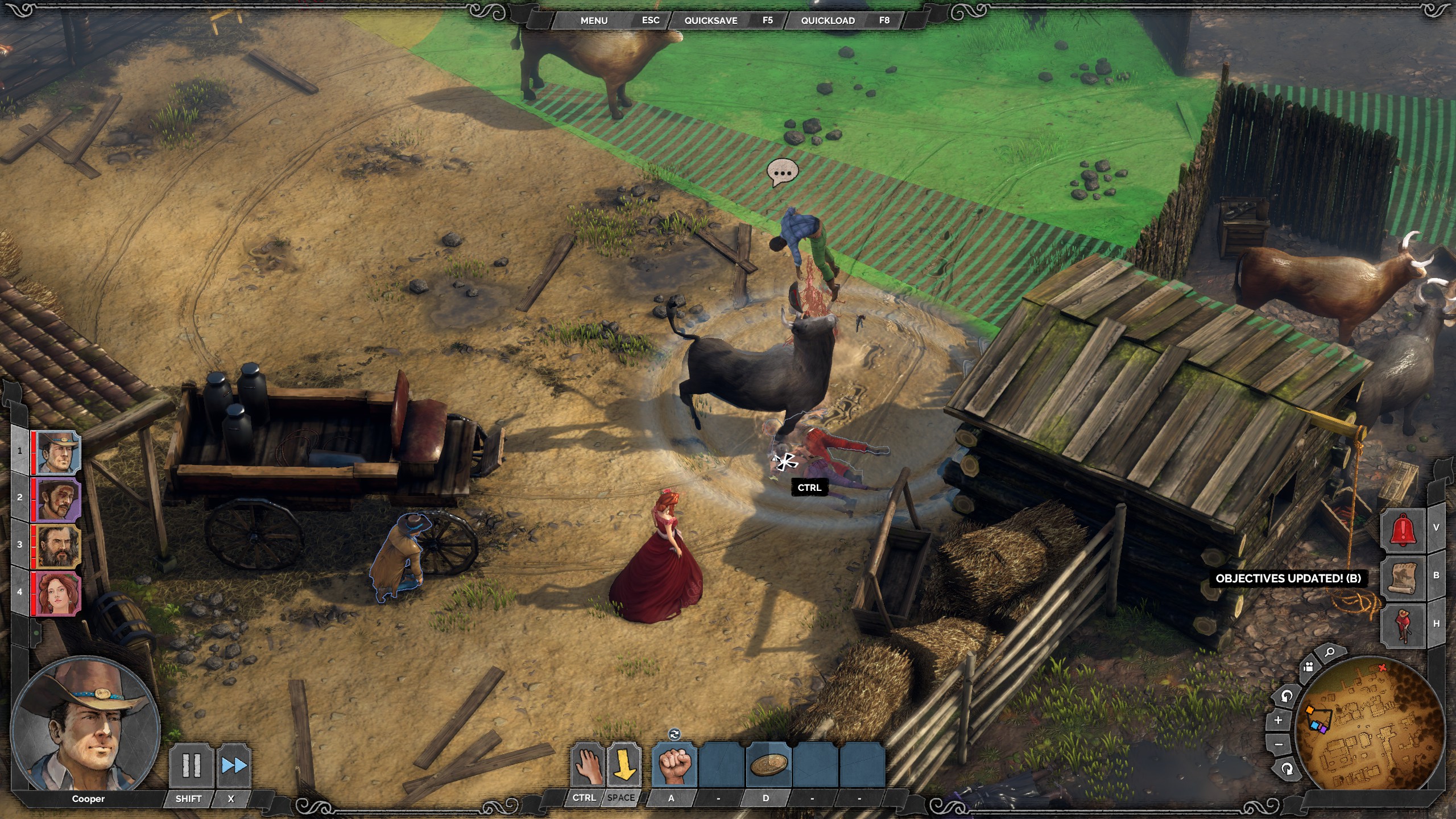 Using the environment, like animals, to kill does not alert the friends of the fallen. Freak accident, they assume.

Key to making all the locales as robust as possible is Mimimi’s upgrade to what they have accomplished with the Unity engine. Side-by-side, one can see that the developer was experimenting with cell shading to render NPCs, in Shadow Tactics, Desperados III features textured polygons. Of course, this update translates to better visuals overall. 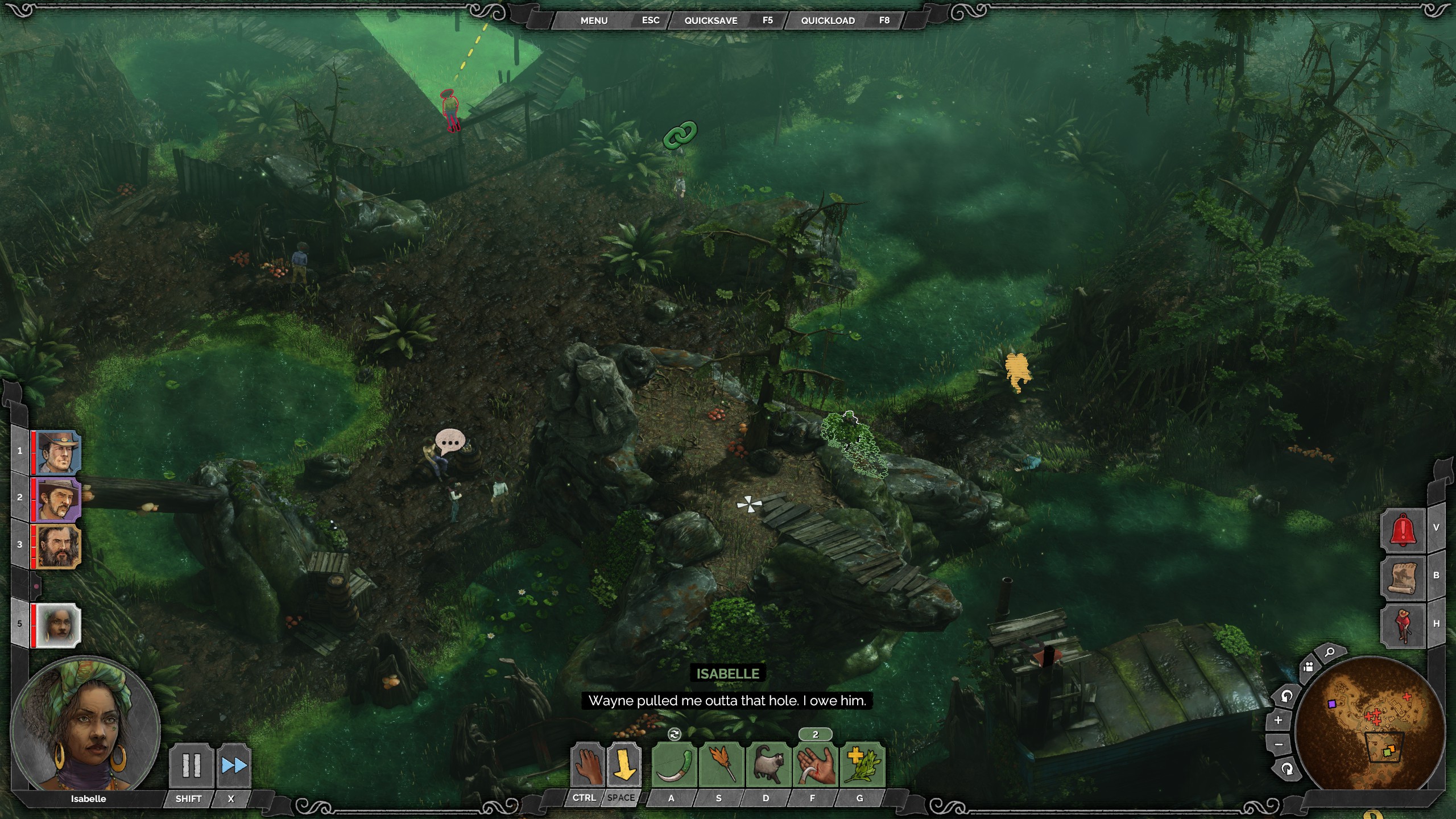 I am doting on this point because I feel that Mimimi made a conscious effort to justify deploying a diverse cast of characters. Japan in Shadow Tactics is homogeneous; Desperados III takes place in America, and I compliment the development team for their efforts to make sure it looks as such. I caught myself taking screenshots of basic NPCs and enemies, thinking to myself, “is that character…black?!?!” To be absolutely transparent, Mimimi ingeniously leads its cast to New Orleans to justify why the game-breaking character, Isabelle Moreau, would join John’s posse.

Yo did @MimimiProd just do that in Desperados III?

McCoy discusses the convict leasing system, a result of that grim clause in the 13th amendment?

I was not expecting that. Well done! I love it when video games address actual history (esp racial history) pic.twitter.com/luZ5iyf9QM

Mimimi Productions was not afraid to explore the convict release system, a post-slavery invention designed to perpetuate black oppression.

I say game-breaking with the utmost affection. Isabelle is the only character whose kit completely varies from any character in Shadow Tactics. Okay, so maybe her um…supernatural…cat, Stella, is similar to Takuma’s tanuki, but her ability to link two enemies together such that whatever happens to one happens to the other is simply epic! I encountered dozens of situations where because of the mystic link, she is able to single-handedly clear areas that would otherwise require two or more characters. When a situation is just too difficult to figure out, she can straight up cheat with her mind control ability. Just like it sounds, one can control an adversary and use him or her (yep, DeVitt is an equal opportunity employer) to shoot another foe in the back of the head. This mind control ability is ultra-limited, as this get-out-of-jail-free card should be. 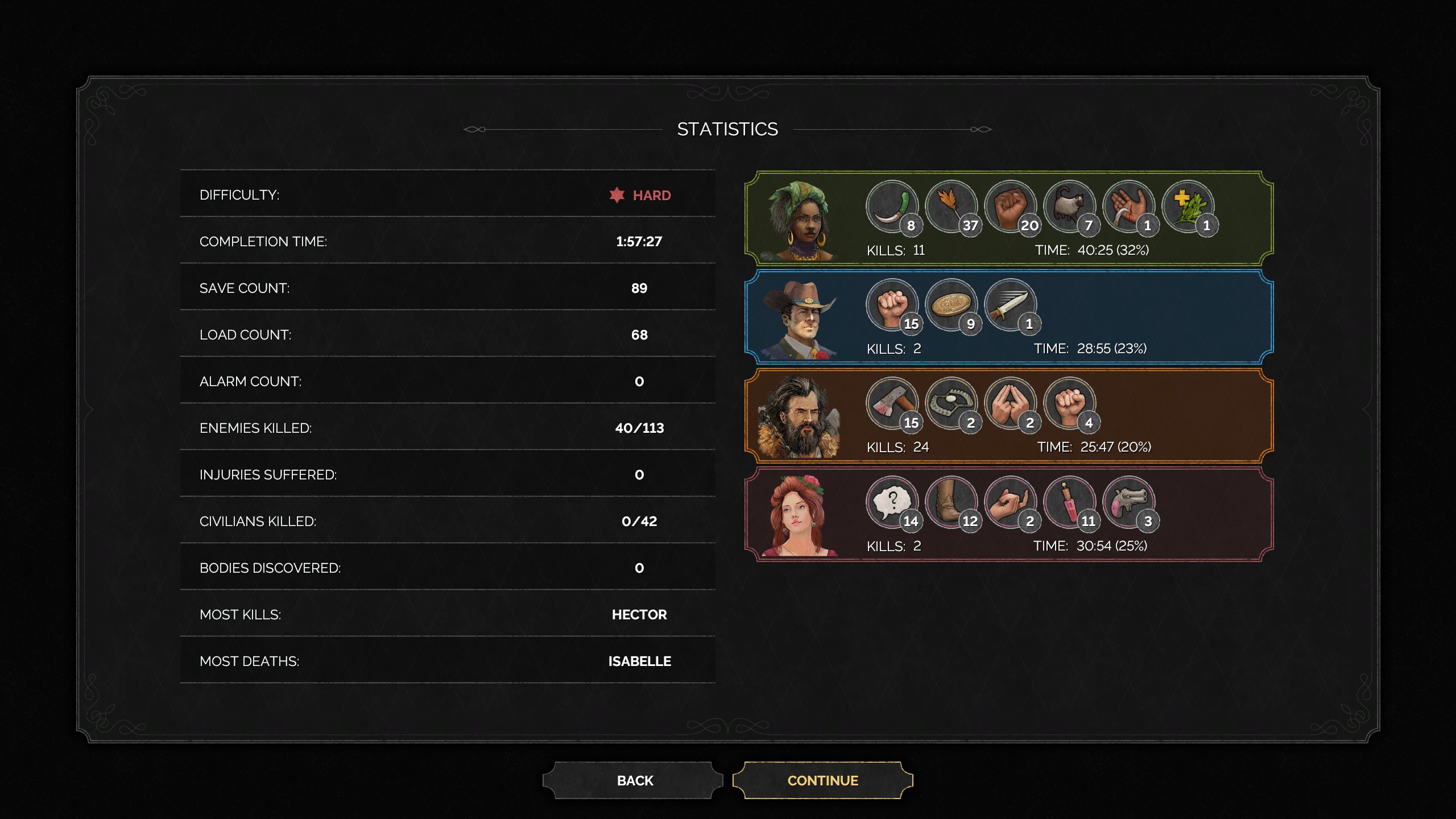 Isabelle and Hector are my favorites.

In Shadow Tactics, Mugen is the samurai whose seriousness concerning honor compliments Hayato’s cynicism. Yuki is a silly girl channeling Kai from Heavenly Sword, Takuma is a cooky old man who speaks in haiku, and Aiko is just…there (for Mugen?). They are a ragtag team of misfits plus one tragically honorable man. In contrast, the cast of Desperados III, have character and chemistry! Hector is a straight-up ladies’ man, a charmer who speaks about his steel trap, “Bianca,” as if it is a real woman. He even manages to talk a married woman out of her slip, as the game reveals during a cutscene. Isabelle and Doc go at each other in a way that makes the latter appear to be hostile toward the former because of her career and countenance; in exchange, she mocks him, calling the curmudgeonly hitman “Sunshine.” Gamers will have to play and see how their relationship plays out, but their interactions suggest a rigorous friendly rivalry. 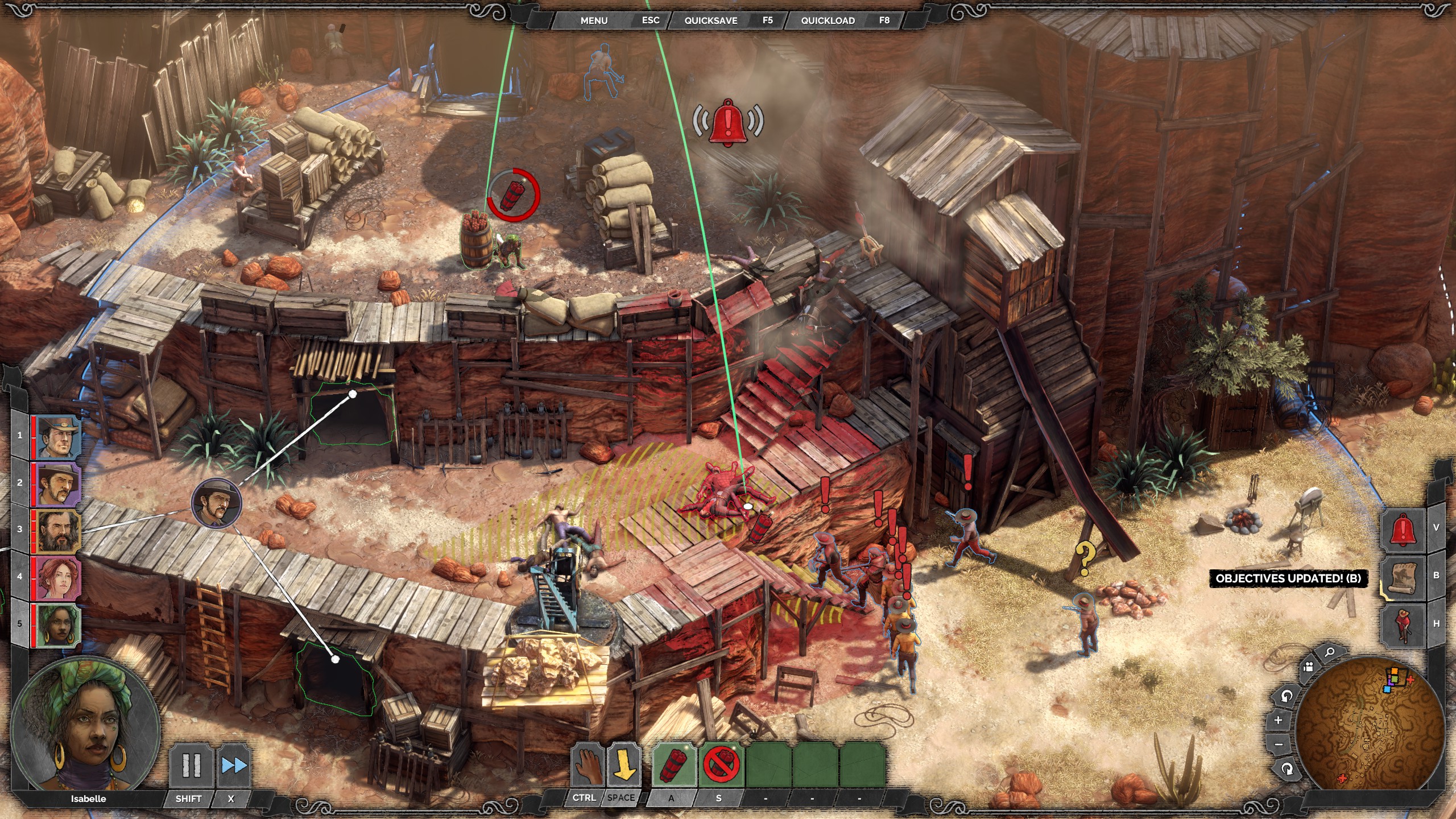 If Baldur’s Gate 2 is still the gold standard of voice acting for random character interactions, then Desperados III took notes in that regard, too. There were several points in missions where I wondered if a character would say something different depending on which teammate would accompany them during a mission. I certainly figured out that at key points of a map, the character who reaches the invisible trigger first gets to say the line. Sometimes, I will quickload and push a different character first to hear their line instead. Offering multiple ways for players to accomplish anything from objectives to voice lines is yet another area where Desperados III shines. Sometimes, the choices are overwhelming! 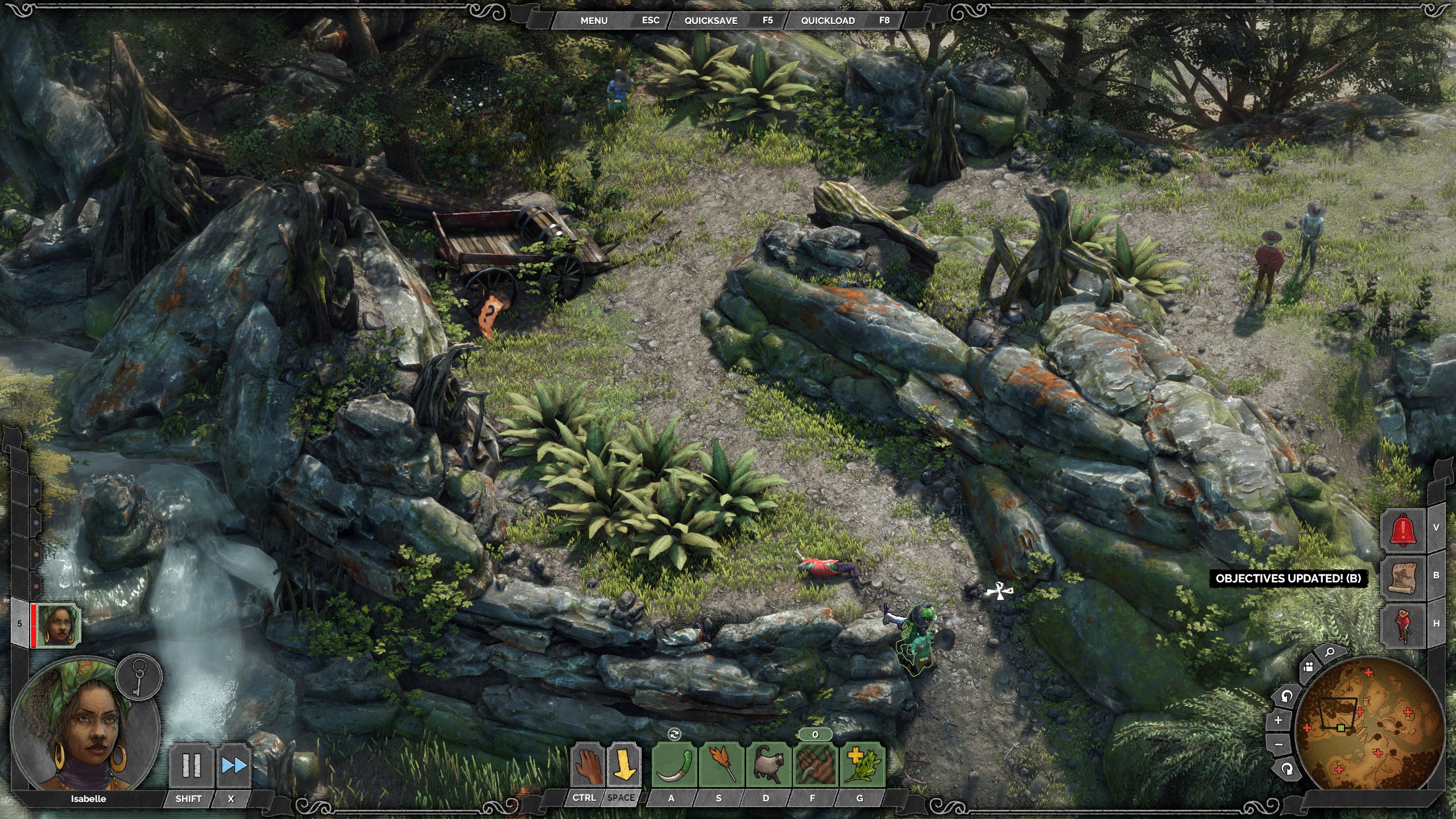 I did not think that Mimimi could surpass what they were able to accomplish with Shadow Tactics, but they have proved otherwise. Desperados III is a western-themed real-time tactics game. In Mimimi we trust!

With Desperados III, Mimimi Productions has improved upon what they started with Shadow Tactics in every conceivable way, essentially perfecting the real-time tactics formula.