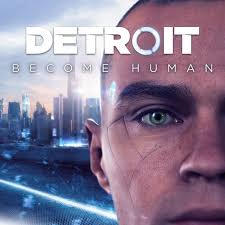 While Quantic Dream’s previous games have only given us a glimpse into the mind of prolific studio head, David Cage, Detroit: Become Human is perhaps the realization of Cage’s ultimate vision for what he has been trying to achieve in gaming. Combining the best elements of his previous titles, Fahrenheit (Indigo Prophecy), Heavy Rain, and Beyond: Two Souls, Cage has finally crafted something truly special, a game that is simultaneously Cage’s best work and one of the best adventure games I have ever played.

Detroit: Become Human deals with some really intense subjects like drug addiction, child abuse, the dangers of artificial intelligence and overreliance on technology, slavery—both of the human and sexual kind—religion, and infidelity in marriage just to name a few. There is no overt nudity, but one of the crime scene locations is essentially an android sex club. There is a good bit of brutal violence in some scenes depending on choices made, and androids and humans can be seen getting crushed, stabbed, ripped apart, cut up, or shot and androids can actually bleed (blue blood) and die. 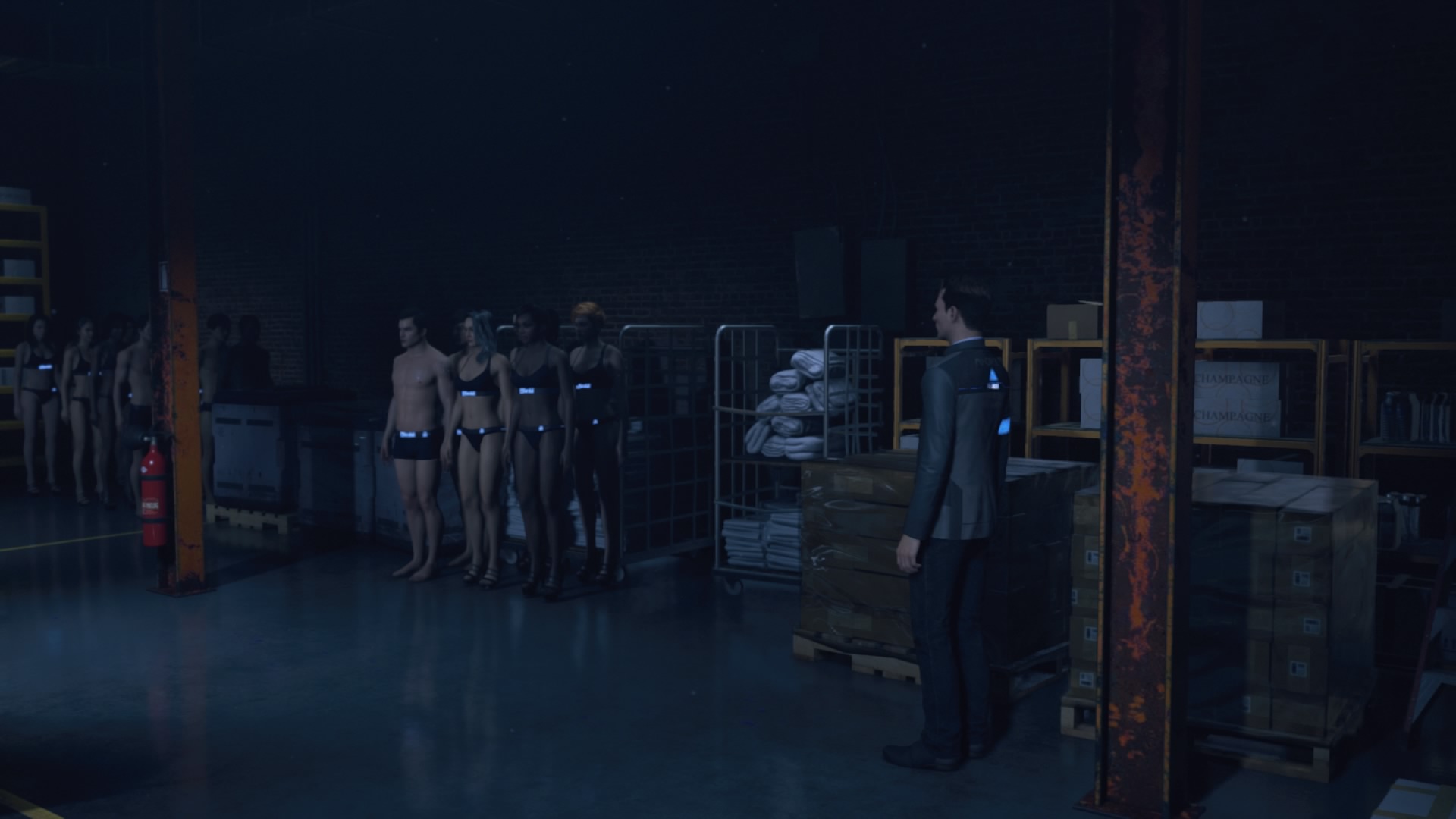 Some areas in Detroit: Become Human give off a genuinely creepy vibe, like this basement in an Android Strip Club.

Detroit: Become Human is arguably David Cage and Quantic Dream’s best game to date. The three characters that players take control of are all believable, and the roles are well acted. Unlike most adventure games, the dialogue never feels stiff or stilted and movement is surprisingly not janky or sluggish as can be the case with other adventures games, such as those made by a certain developer famous for story-based adventure games.

The story starts off in the same place as the previous gameplay demos from E3 and the one released on PSN shortly before the game’s launch. Cyberlife Android Connor is called in to investigate a murder perpetrated by the family’s own service android, Daniel. Here, players are introduced to the game’s general gameplay which involves searching the environment for clues and different objects to determine why the android Daniel became Deviant. Deviants are androids who have realized they are capable of independent thoughts, feelings and human emotions, and have broken free of their programming. The overlying theme throughout the game is whether or not Connor is right for trying to track down and bring these androids to justice versus him becoming deviant himself. 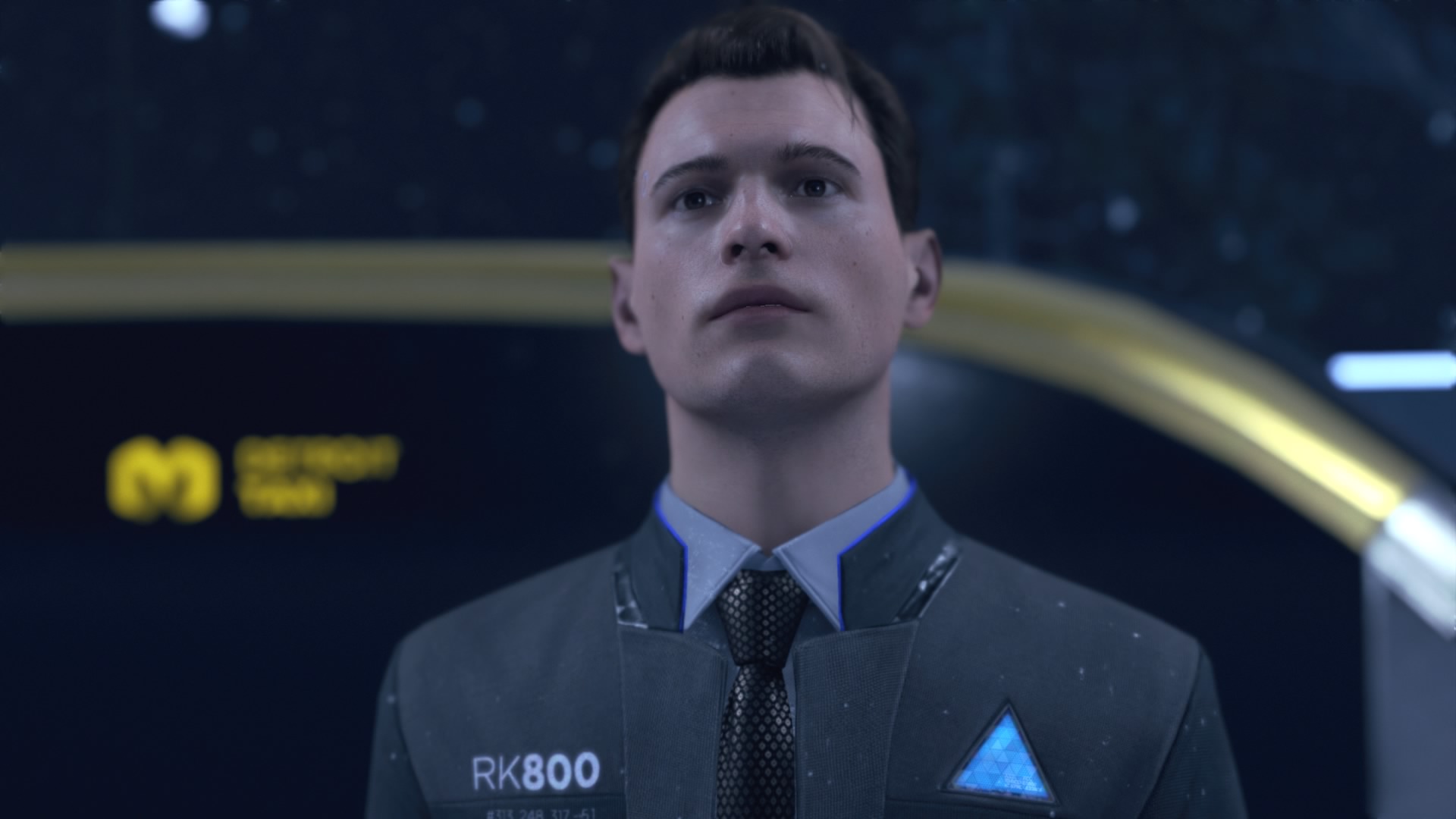 Connor is the first character players are introduced to in Detroit: Become Human.

Each playable character, of the three available, offer slightly different gameplay quirks and mechanics. For example, when playing as Connor, making a choice dictated by emotions will cause a “software disruption” and unlock the potential for Connor to go deviant and eventually break free of his own programming. All three characters have these moments where they finally become deviant, but how they get there is different. As another example, Kara, a simple house cleaning droid, is motivated by her love for and desire to protect Alice, the daughter of a physically abusive, drug addict father. Witnessing the moment Alice’s father flies into a violent, potentially deadly rage, Kara must break free of her programming if she hopes to save Alice.

Moments like these also determine the public’s view of and opinion on whether or not androids deserve the same rights as humans which can have a major outcome on the ending of the game, and the ultimate fate of each character. Markus, the final playable character, starts out as an android owned by a wealthy artist, and while his owner treats him as if he were his own human son, Markus still feels confined, and longs to experience the greater world out there. His story is primarily motivated by this desire, and his entire arc can become either a violent antifa-like struggle for the same rights as humans, or a Martin Luther King-esque example of non-violent, peaceful opposition to an overbearing and authoritative government that views androids as servants and slaves. 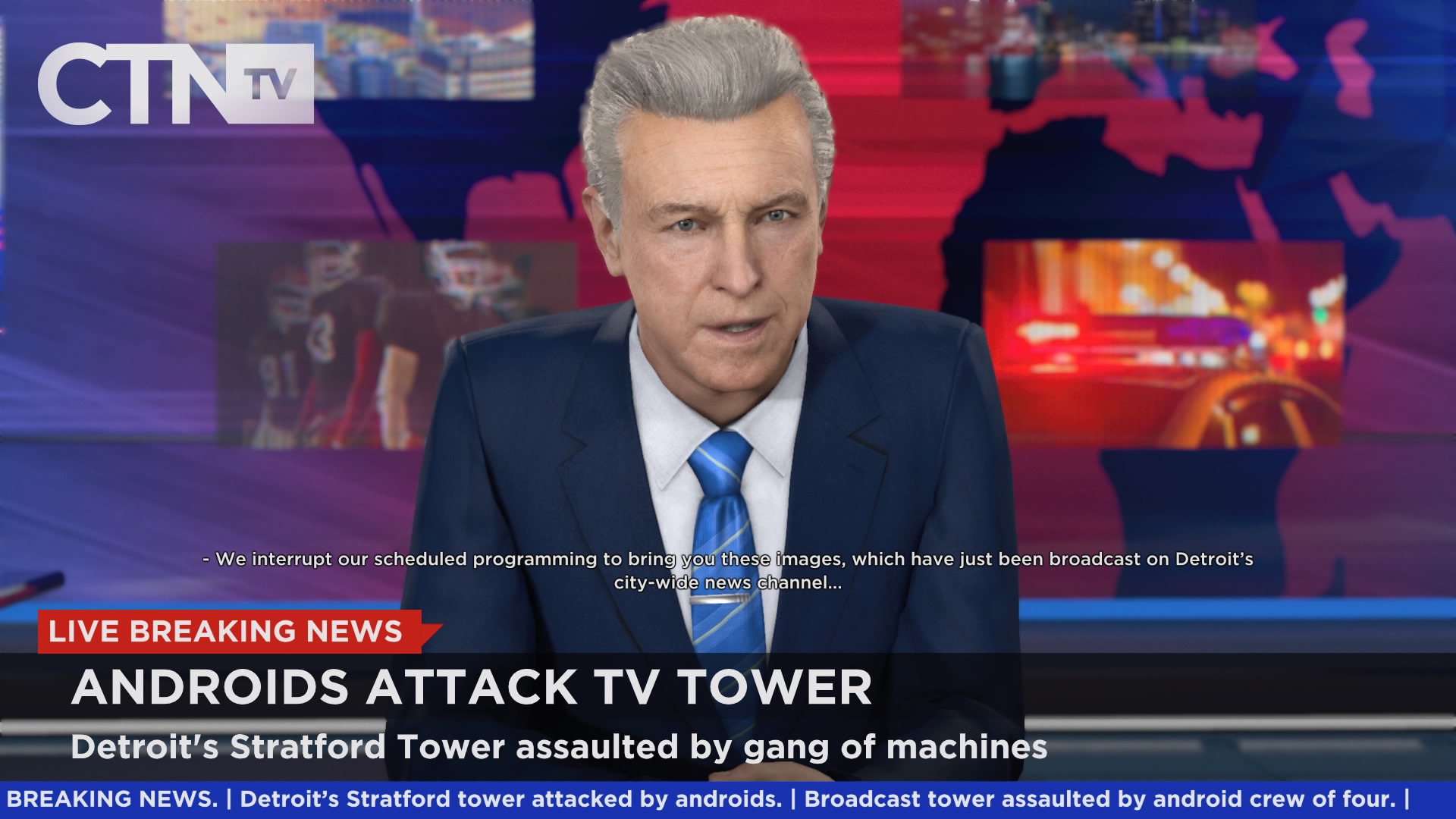 Depending on what choices players make, these news reports will vary in topic and tone throughout the game.

Perhaps the feature that differentiates Detroit from Quantic Dream’s previous games is the flowchart shown after the completion of each chapter. Essentially, each character has anywhere from two to three possible outcomes per chapter, and the flowchart splits off of each of these choices in surprising ways. While it is possible to complete a good chunk of the timeline and get the best ending in the game, players will have to complete at least two more playthroughs making entirely different choices, including purposely letting some characters die in order to see everything. It is a completionist’s worst nightmare. Luckily, there is no trophy that requires players to 100% the flowchart for the entire game, but it is somewhat overwhelming to look at a completely empty flow chart that came about as only one of up to three or more possible outcomes for a chapter.

In the face of this, the replay value in this game is immense, and the story is engaging enough that I will definitely play through the game at least two more times to completion. However, the outcome of some chapters, and even some endings seems to tease more to come and it makes me worry that we may have to wait for story DLC or a sequel to get the true ending to the game, as I felt even after getting the best ending possible, that an epilogue chapter would have been sufficient to close up a few of the game’s plot holes. 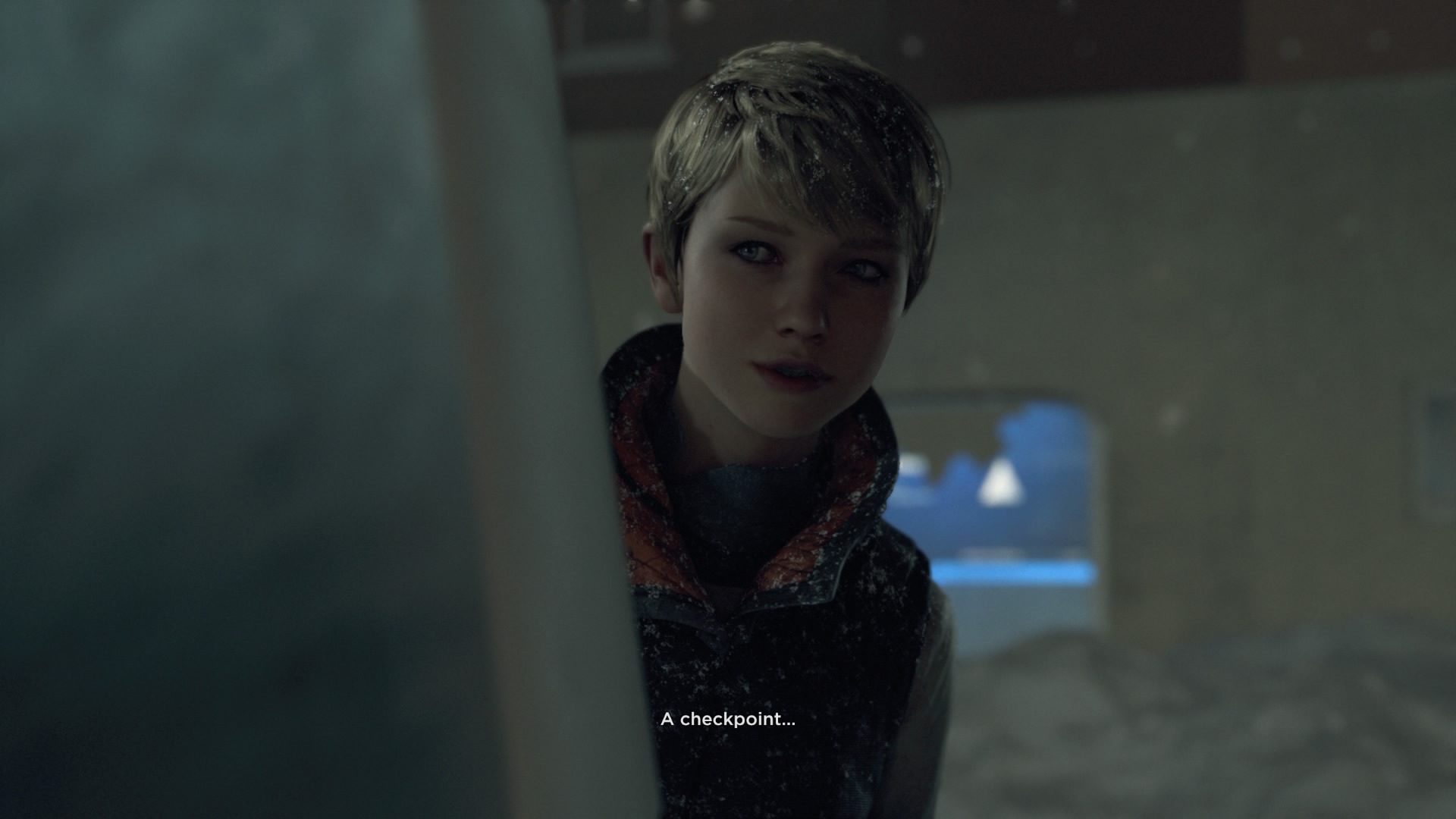 Kara and Alice seek shelter from the authorities and other threats in just one of many tense sequences for the pair.

Combat is mostly QTEs akin to Quantic Dream’s last game, Beyond: Two Souls. No button on the Dualshock 4 goes unused save for the Options and Share buttons. Some QTEs even require players to gently press the thumb stick in a direction before holding it there to complete a task. Like with most choice based games, and especially adventure games, dialogue options are varied and plentiful. The difference is, here these decisions actually matter. If players don’t take the time to explore the environment in each chapter, they may miss out on certain characters and story beats. For example, in one of Markus’ missions, he and his crew are tasked with stealing much needed supplies for their community while avoiding detection by the guards. Towards the end of this sequence, players have the option of attacking and destroying the android guard patrolling the perimeter or convincing him to go deviant instead, which Markus can do easily by simply gripping the android’s arm or hand, much like a handshake. Choosing to recruit the guard can have a positive impact in later chapters, but I won’t say exactly how here as I don’t want to spoil just how important even the smallest decisions can be. 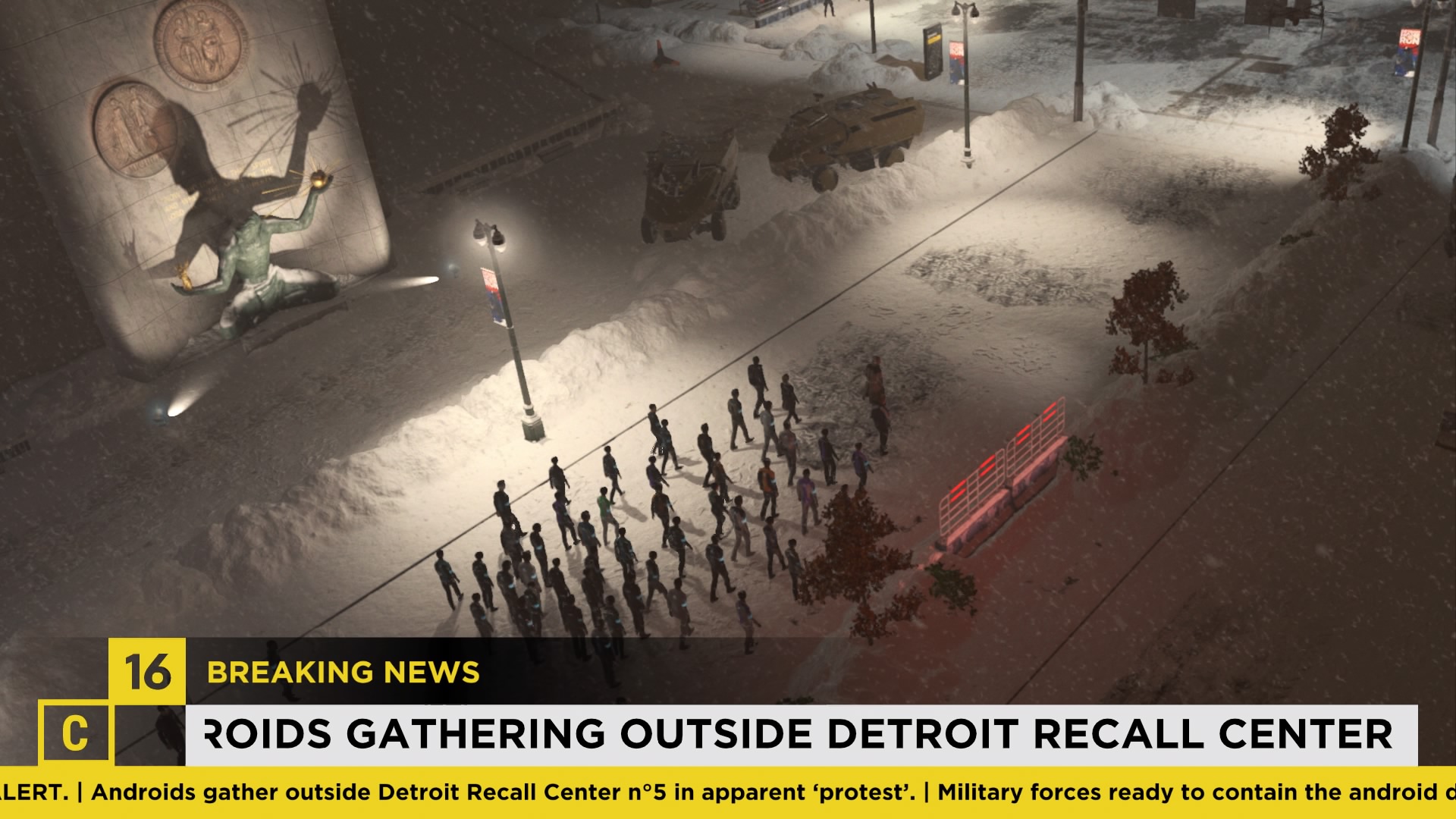 Quantic Dream even shakes up the formula with a surprising twist to the game’s meta. When you first boot up the game, you are greeted by an android named Chloe who acts as your guide and explains what the menus do and how to navigate the UI. As players complete chapters and back out to the menu, she will comment on decisions players make and even provide players with a small quiz to determine what type of person they are. Beating the game and then returning to the menu even offers a huge surprise which came out of left field and was simultaneously one of the most intriguing and unsettling things I have experienced in a game in a long time.

Overall, I would recommend Detroit: Become Human to fans of adventure games, interactive drama, and Quantic Dream’s previous work. It is a statement on what it means to be human and is surprisingly current in its portrayal of America’s political and social climate. The best part about this game though are the stand-out performances from its three leads and the agonizing and torturous decisions that they are faced with throughout the course of the game’s story. The scenarios each character faces in this game would be enough to break even the toughest human but the androids’ ambition and determination to overcome every obstacle life throws at them shows how powerful the human condition truly is. 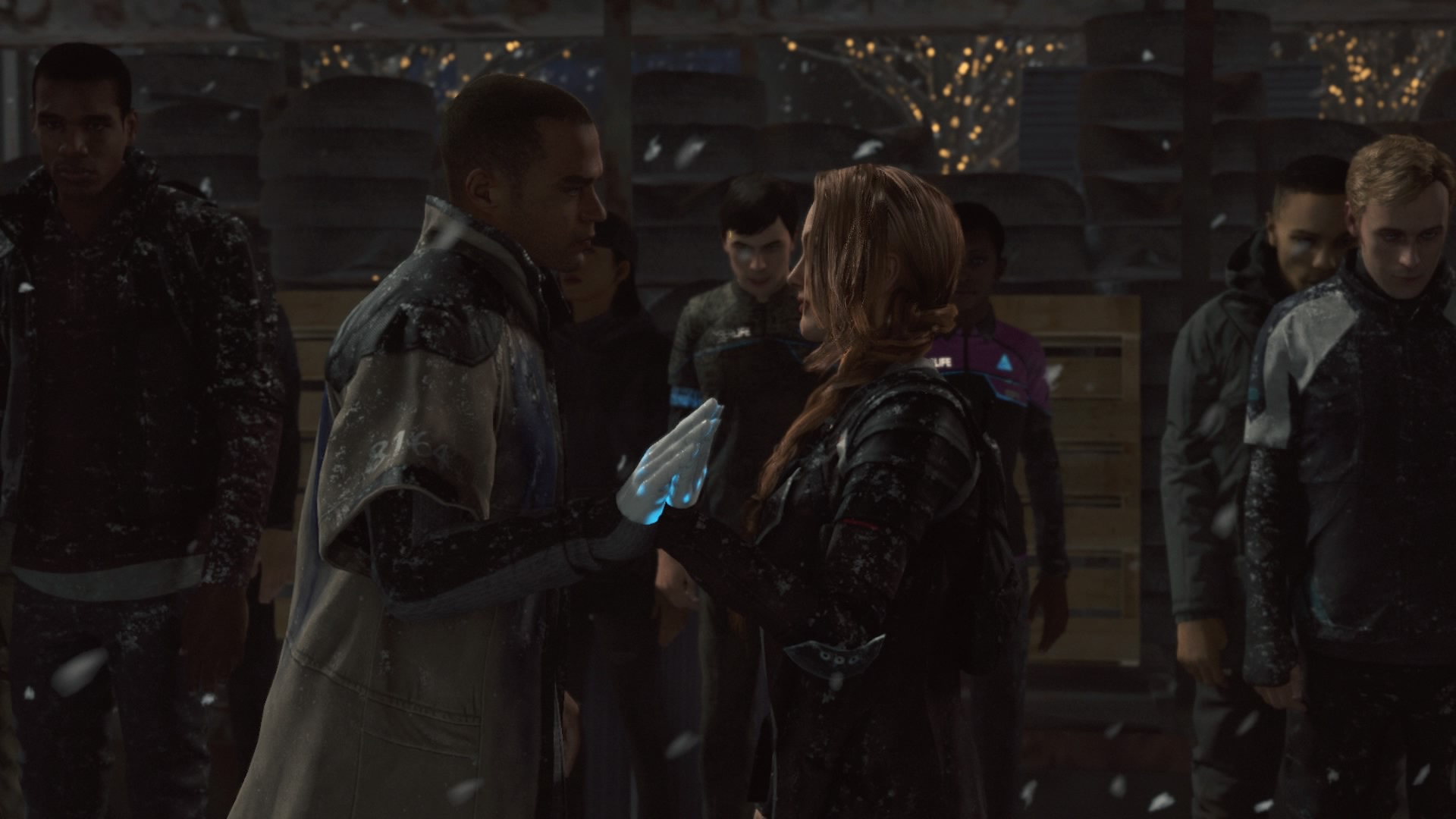