Party's gettin' crazy all over again.

I gotta let it out, gotta let it out! Players have been waiting for this game for a long time. Devil May Cry 5 is the conclusion of the Sons of Sparda saga and a dream come true for hardcore fans of combo-intensive combat. It’d be really easy to speculate but for now let’s set up our Devil Breakers and get this party started once more.

Graphic Violence: Players will use a massive arsenal of swords, guns, and other weapons to kill demons. Combat gameplay is highlighted by gunfire, painful screams, and slow-motion finishing moves. One cutscene depicts civilians being impaled by tentacles of the Qliphoth Tree as they scream in pain. Another cutscene has one character have his arm effortlessly ripped off and blood is shown spraying from the open wound. Blood appears frequently during combat and stains several environment objects and the player character models. 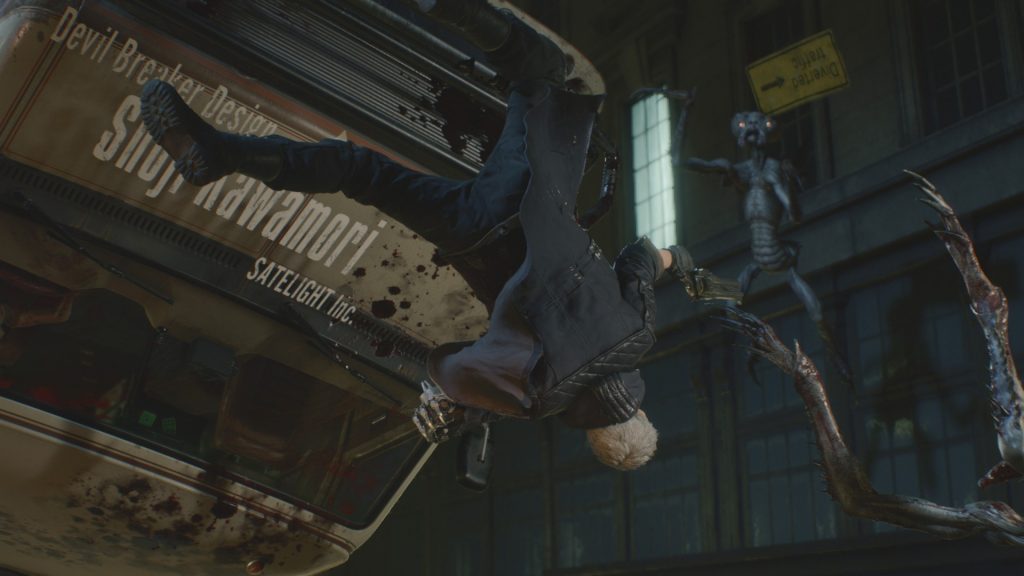 Trust me, the demon with the sign lodged in its head got away lucky…

Nudity: A few cutscenes depict two of the female characters partially nude, obscured either by blood, light or clothing.

Spiritual Content: Hell is acknowledged as a realm that physically exists and contains beings called demons or devils. Characters like Dante are acknowledged half-demons or full demons with human bodies and are able to transform into their demon bodies as a game mechanic and a part of the main story. Weapons have magical properties to them, one allowing a demon to separate their assumed humanity from themselves which is then given physical form.

Positive Content: Despite showing one character as an avid smoker, Devil May Cry does not promote smoking or the usage of cigarettes (No, I am not joking). Nero represents an idealistic mind that attempts to find redemption for people who think they have none or even think the very idea as foolish. Even though he was slighted by someone he trusted, he struggles but tries to accept them for who they are and even convinces them that there are better ways to handle their imperfections. This reflects the personal struggle that we, as Christians, must face when interacting with others who will not agree with the same values that we try to uphold and how we can be willing to compromise instead of facing the problem during these interactions. 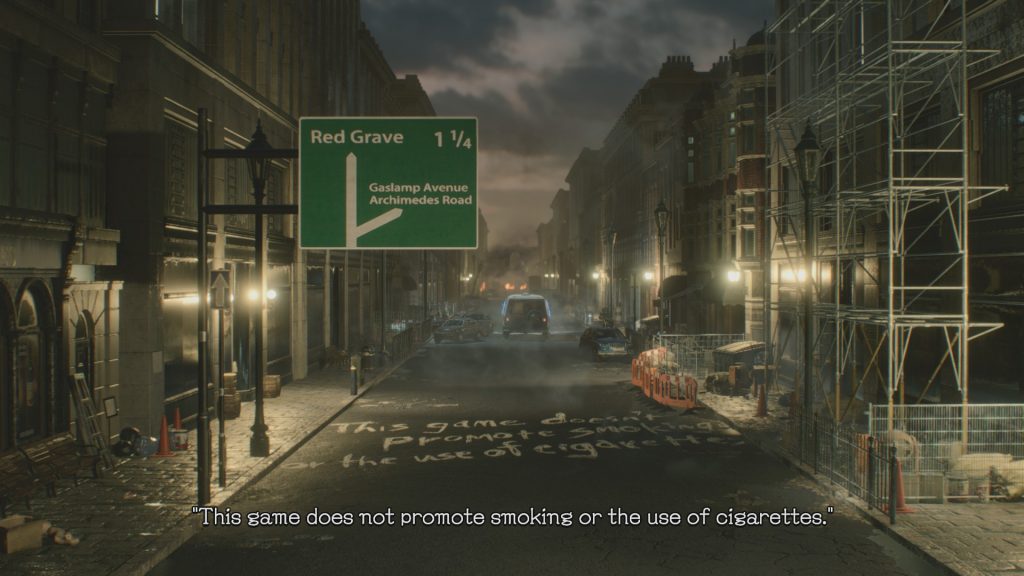 Remember, Winners Do Not Smoke.

I am not as avid a fan of Devil May Cry as others since I started with Devil May Cry 4, but the franchise grasped my attention when DMC 3 came out for the PS2 and started my obsession with character action games. But even if I’m not a hardcore fan, anyone who plays video games feels the love fans have for DMC. I can say with confidence that DMC 5 is a game that fans demanded as much as Persona 5. (Yeah, I went there. Challenge me.) But let’s move on before we get crazy… 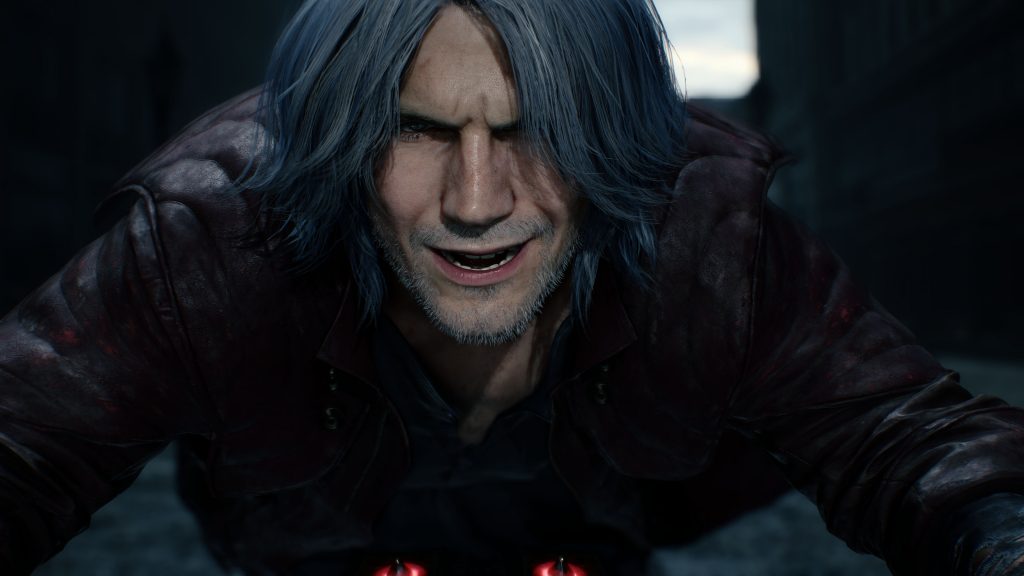 Nice to see Hank from Detroit: Become Human has slimmed down. Good job cutting out those burgers!

If you picked up DMC 5, it’s likely for the gameplay. Nero and Dante return from DMC 4, with Nero sporting a new combat system thanks to his Devil Breakers, mechanical arms developed by his business partner Nico; there are eight arms in the main game, not including the ones you get from purchasing the deluxe edition, and each one has a unique power. For example, Overture has an electric burst that blasts an enemy in the direction Nero faces. This blast has a lot of combat utility to it aside from combo potential. 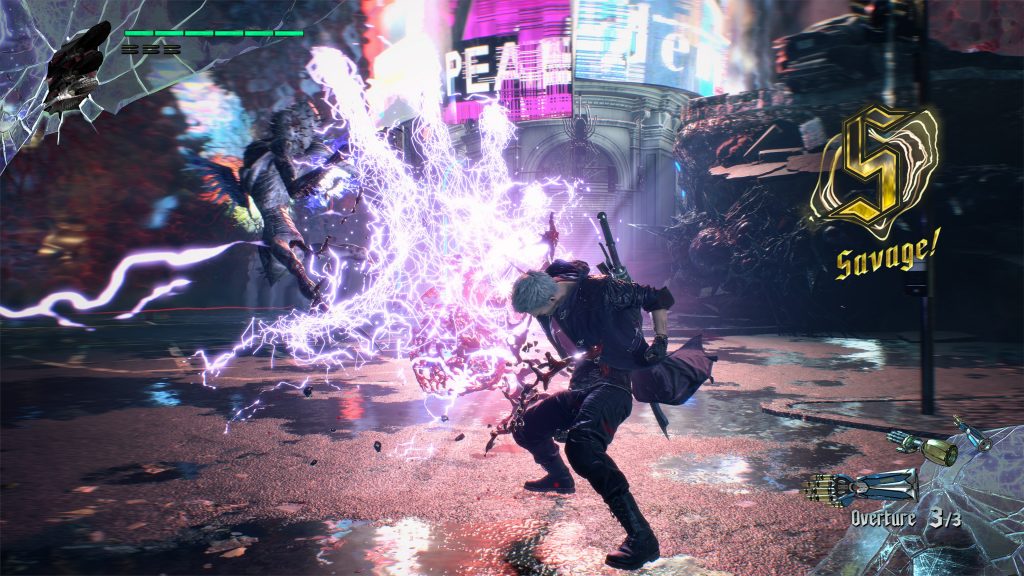 Overture doesn’t just stop enemies in their tracks. You can even use it to parry attacks and follow up your combo with ease.

Nero still has his Red Queen sword and Blue Rose magnum. The Red Queen can be revved up to three times to do more damage and add a unique fire property to his attacks. The Blue Rose has been updated to stun enemies with a new Charge Shot. Nero’s received some great upgrades to his arsenal since DMC 4 which will satisfy Nero fans…if they exist.

Dante has four styles he can switch between during combat: Trickster, Swordmaster, Gunslinger, and Royalguard. If that isn’t intimidating enough, Dante comes with his trusty sword, the Rebellion; dual pistols, Ebony and Ivory; the Coyote-A shotgun; and combat gear like Balrog, which can switch between fist and kick attacks. Trickster gives access to evasive actions, Swordmaster expands your melee weapon movelists, Gunslinger does the same for your guns, Royalguard grants a block move that absorbs incoming attacks which can be built up to release a devastating attack. On top of all that, there is also the Devil Trigger, a transformation which increases speed and power and grants health regeneration. 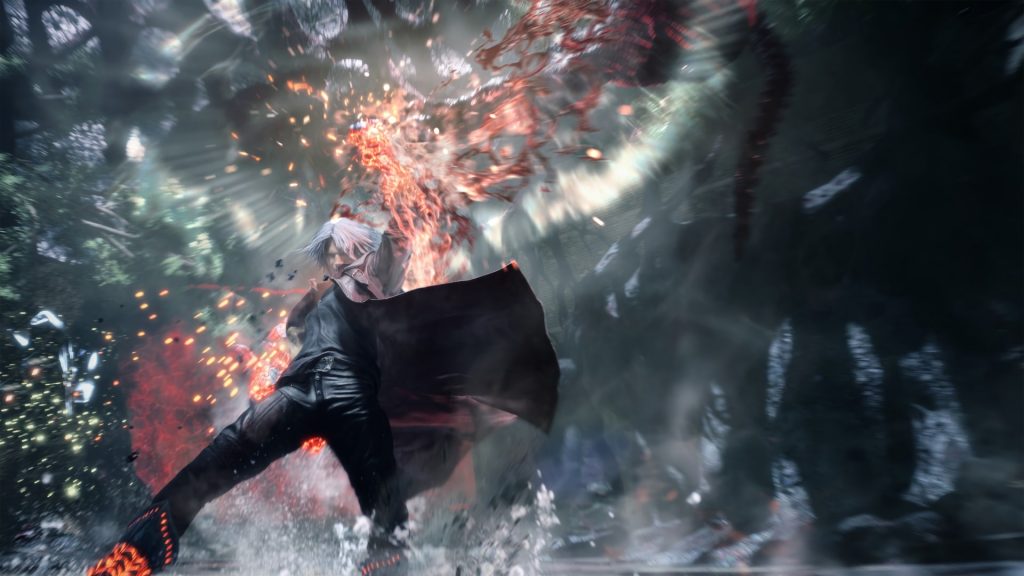 Balrog offers an amazing plethora of fist and kick moves right out of the gate to give you a taste of the good stuff.

Don’t feel too bad. V and his demon buddies will cheer you up…maybe. A newcomer to the franchise, V is an incredibly unique character who hangs back while letting his familiars attack the demon hordes: Griffon, a falcon that focuses on attacking from afar with electricity; Shadow, a panther that transforms into bladed weapons to tear apart enemies up close; and Nightmare, a giant that clears the area with its violent swings and lasers. V’s familiars weaken the demons, then V comes in to finish the deed; the method to fight is simple enough but the button layout makes this odd to control since each familiar is controlled by one button. 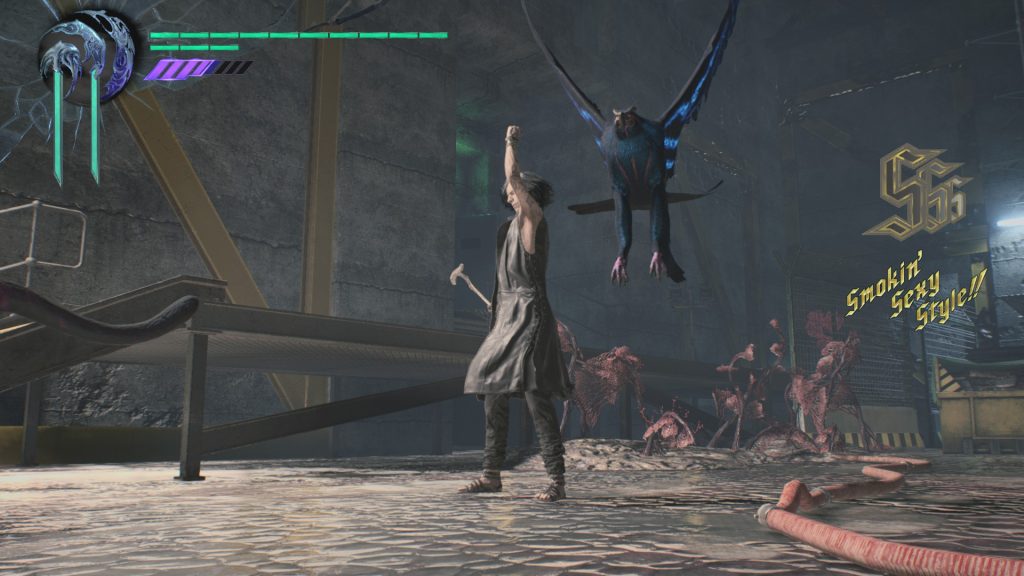 Performing well in your combo rank will give you fun taunts like this one where V conducts to The Ride of the Valkyries. Exquisite.

Out of the three you get to fight with, V is the easiest to use since battles are adjusted for his specific style. Dante is the hardest but the most fun; his style switching can be tricky but rewarding once practice has been invested. I found that while Nero wasn’t especially difficult to use, it took some time to get used to the breadth of his movelist. Nero has the most versatility after a certain point in the story, but even then players may find themselves forgetting one of his abilities while fighting. Nero isn’t boring, but you may not understand the importance of his utility if you don’t spend time learning his moves.

It’s tough to get down, but mastering Exceed will give you greater damage as Nero.

The story is the most serious DMC plot ever. Normally, every story has been treated nonchalantly by its characters despite the danger present. Hideaki Itsuno, who has directed the DMC franchise since the third title, promised at E3 2018 that they will exceed the player’s expectations. That promise, surprisingly, extended to the story as well; we’re introduced to the main antagonist, Urizen, immediately in the prologue as he completely defeats Dante. We then see that the Earth has been invaded by a large tree known as the Qliphoth Tree, a plant from Hell, which has spread its roots out at Urizen’s command. Nero is forced to retreat for now but returns to the demon tree after some time to free Dante and defeat Urizen. 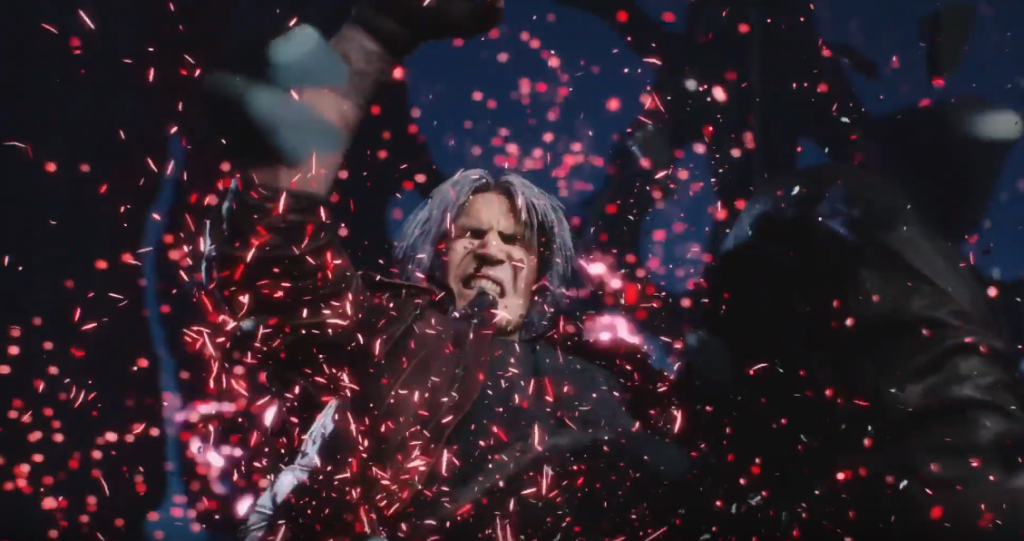 So how bad is this moment? Imagine going up to Ganon with the Master Sword and it broke on first swing…

This is significant because Urizen is one of the only opponents that Dante has taken seriously. Nero, being the fresher demon hunter, doesn’t stand a chance against Urizen even with the Devil Breaker arms. The story arc is great in Nero’s case as he starts out with a more personal goal, but as the game progresses he realizes that his motivations are too short-sighted. Unfortunately, the story falls flat near the end and wraps things up too neatly.

However, the main plotline is half the story. DMC 5 itself is built like a collage of every DMC game before it coming together (yes, even the spinoff DmC: Devil May Cry) as a triumphant send-off to the franchise. Enemies and bosses from each game are brought back and remixed to reward players of previous knowledge but still offer a new challenge. One prominent example is the Cavaliere Angelo fight with Dante that refers back to the Nelo Angelo fight from DMC 1, an enemy that fought similar to your character. 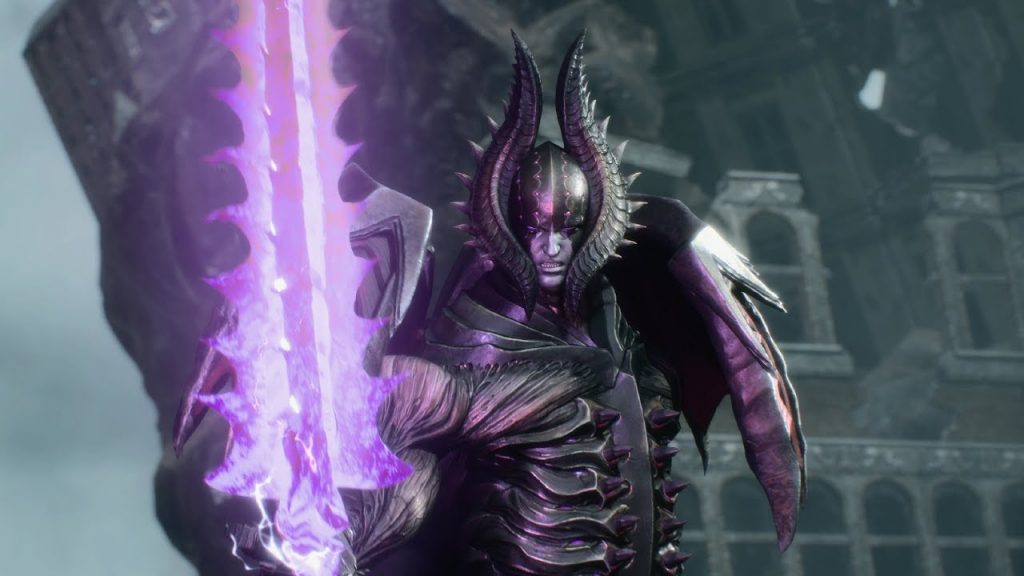 Sure, I see how this guy turns into a motorcycle that splits into dual blades. He’s very symmetrical.

There isn’t much else to really go into that doesn’t spoil the game other than that DMC 5 is so much fun. Despite my jape at Nero’s popularity in the franchise, I think his role in the main story is well-realized . V and Dante are introduced at the right times just before the game becomes too comfortable. Every boss—every, last, one—is incredibly memorable and fun to play against. Capcom mentioned that they have more DLC planned and I can’t wait to get my hands on them. But until then, I’m gonna have this number on repeat for a while.

A rarity in AAA video games, Devil May Cry 5 is a character action game that delivers everything it promises, serving as a revival and a revolution of the DMC franchise in both story and gameplay, and offering a fulfilling experience for the hardcore fans.