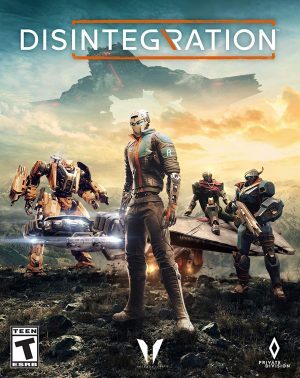 All too often I find myself and others making comparisons to other video games when talking about the new ones. Most of the time, a game pulls elements from one or more, which renders those references easy to make. However, that is much harder to do with Disintegration, a new game from Halo series co-creator Marcus Lehto. Disintegration is a first-person shooter blended with elements of real-time strategy. I admire the game most for its unique conecpt, which makes it hard to compare it to other video games. Its originality forces me to stretch my writing skills and exercise more creativity in describing where it shines and where it seriously lacks. Unfortunately, such a creative idea and new intellectual property falls short.

Disintegration is rated T for Teen, and includes gunfights in which players will use a variety of guns and other explosive weapons attached to their vehicle. Not only do players take part in these battles, but they also command a small squad to attack enemies and activate special abilities that involve mortar strikes and grenades. Though there are a few humans involved in the story, combat occurs between factions of robots, which means that a black oil-like substance takes the place of blood. That substance can be seen in splatters as enemies are shot, and one scene shows a character lying in the oil. Lastly, the only foul language that appears in the game is the word “Sh*t.” 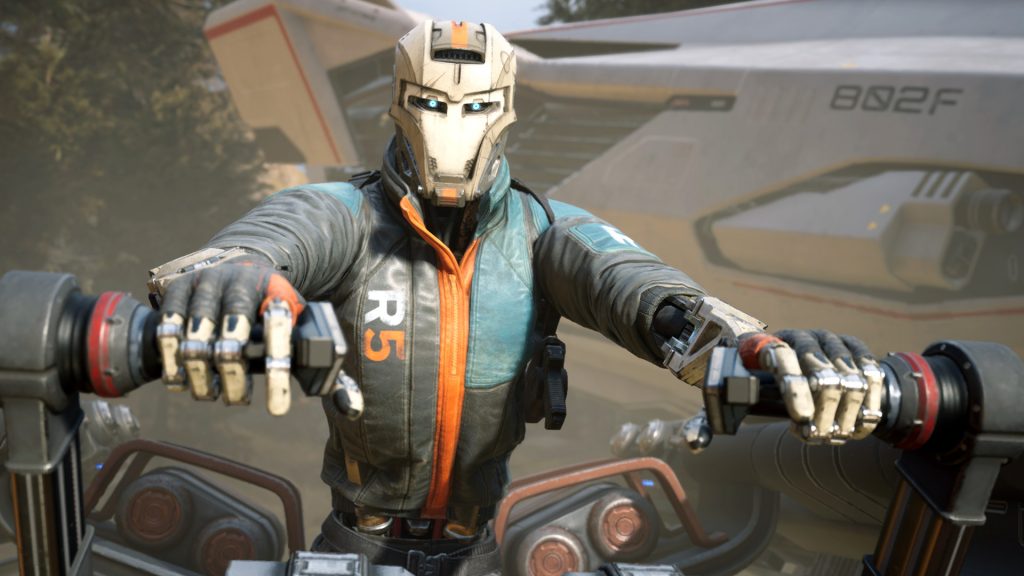 Disintegration tells the story of a band of robots fending off an evil army from bringing humanity to extinction—the catch is that these bots were once humans. With humankind already reaching that point due to many things that sadly resemble current events such as rampant disease and economic collapse, a technology called Integration was invented to preserve human minds. This technology implants the brains of humans into robotic bodies so we can continue to live. If that sounds weird to you, that’s because it sure is.

You play as a celebrity Grav-cycle pilot by the name of Romer Schoal, who busts out of enemy captivity with a group of outlaws. My understanding is that the Grav-cycle is part of some sport, but I still don’t know. Romer joins these outlaws as they eventually join the rebellion against the evil robots called the Reyonne. While the story of “rebels vs. evil empire” is serviceable, I remained disconnected with this world. 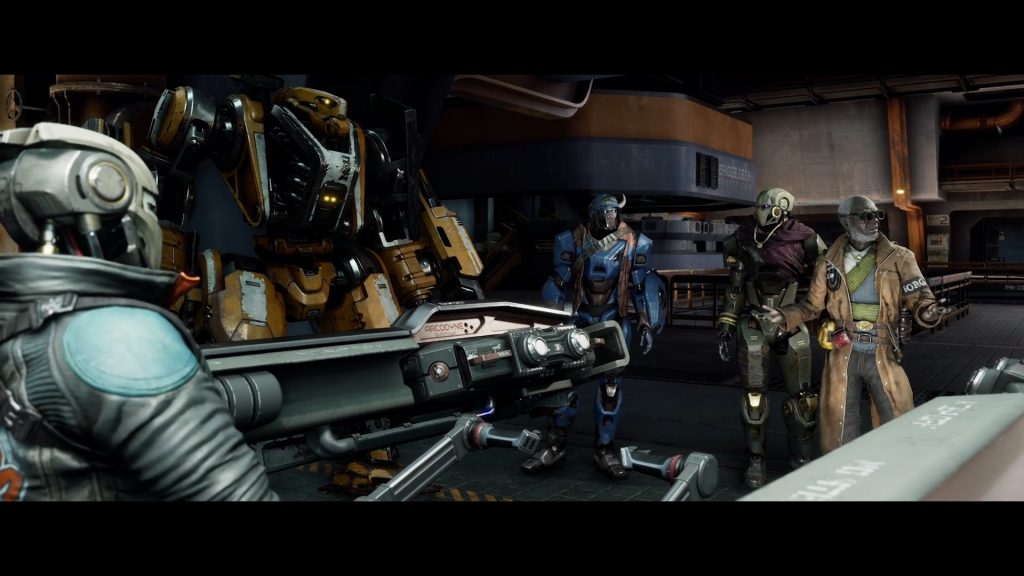 Chillin’ with the crew.

Disintegration did its best to introduce me to the world and lore, especially with unique terminology. For example, regular human beings were referred to as “naturals.” However, hearing the robotic characters speak and seeing them in action breaks my brain. They still wear clothes and hold onto their former humanity, which is clever writing and world-building. If I must make one reference to another video game, it’s as if the developers said, “let’s have a full cast of Cayde-6 from Destiny,” which makes sense because of Lehto’s work with Bungie.

Where this game has the potential to stand out is the core gameplay. Disintegration is a cross between first-person shooter and real-time strategy. Though it isn’t particularly extraordinary at either of those elements, I found enjoyment in commanding my small squad and mixing their special abilities with my own gunfire as enemies would go into a “stagger” state. Having played on both controller and mouse and keyboard, the latter feels  much better. 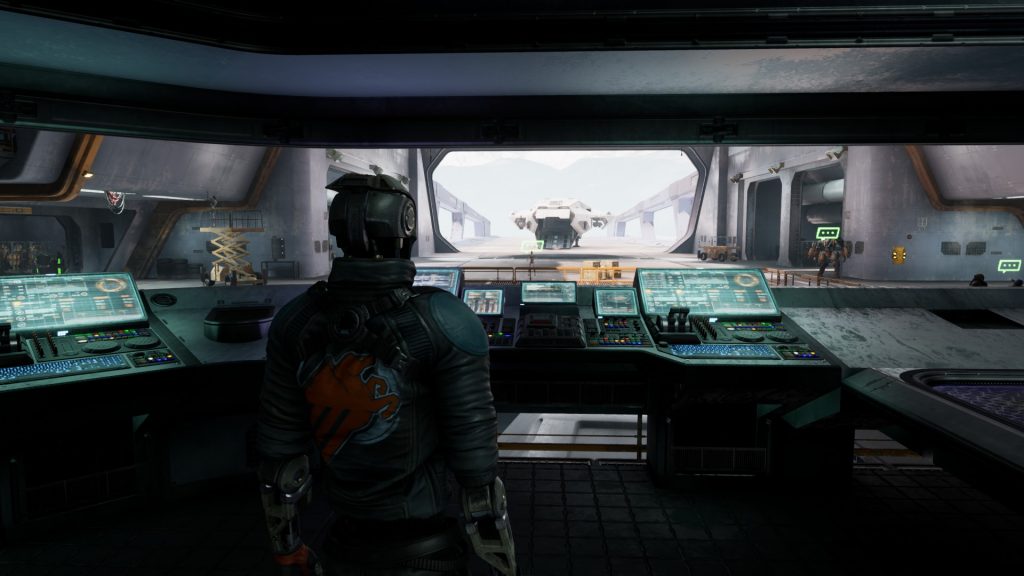 In this hub area you’ll take extra challenges and interact with other characters.

The significance of Romer’s role on the squad is his knowledge of how to operate a Grave-Cycle. In the seat of this floating vehicle that also has guns attached to it, you’ll command a squad of misfit outlaws with their own unique personalities and abilities. Two of them have frag and concussion grenades, while another throws out a slow-mo field; the fourth, who is also your tank, has a mortar strike. You can tell them where to go by marking a spot or have them return to you along with commanding them to use their abilities—this is the extent of those RTS elements.

As for your personal arsenal, you have a set of guns and a secondary launcher that can be used to heal your allies—your loadout is also dictated by the mission you are on. The fun of mixing commands with your gunfire is getting enemies into that stagger state mentioned above. My one complaint with the strategy element is that I would like to command my units to take cover in certain spots specifically, but the game relies more on strategic positioning instead. Even so, there were still plenty of tense encounters that I enjoyed in the campaign. 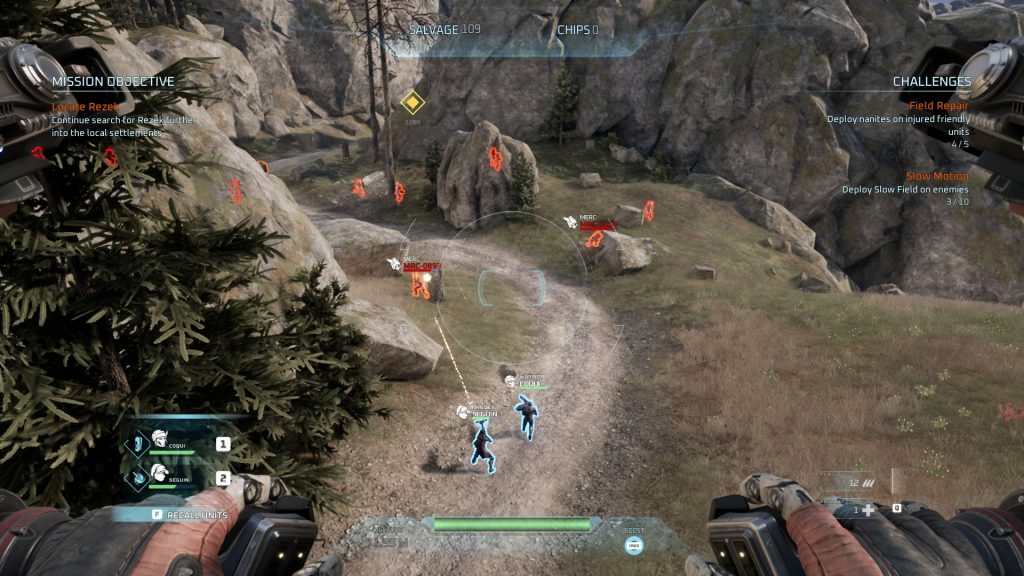 The single-player was where I spent most of my time with Disintegration. Having tried multiple difficulty settings, I found that the harder options will test your skill in a good way and ask for more strategy and quick thinking. Recruit was the perfect decision for me as it provided the right amount of challenge I wanted. Sadly, the checkpoint system is a pain in the single-player experience because it acts only as a point to restart without saving your game when you reach one. On multiple occasions, I was forced to restart a mission from the beginning after turning the game off around halfway through a few of them. Some of these missions can take close to an hour as well, so get comfortable.

The multiplayer mode is a feature I was quick to ignore after a handful of matches. The 5v5 battles with ten pilots and ten squads usually amounted to minimal strategy and all chaos. I found it hard to follow anything that was going on during a match in any one of the various match-types. I had the option to choose from multiple classes and loadouts, which wore silly cosmetic clothing of various themes. This part of the game feels much more slapped together rather than cleverly designed. I would like to see it focus on strategy much more and give teams a reason to communicate. 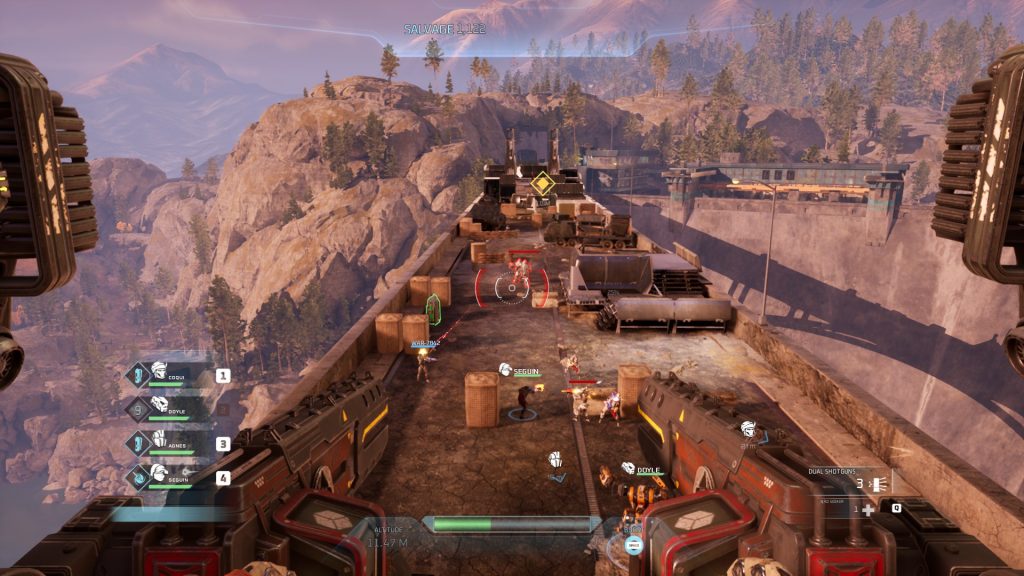 One of the stand-out locations.

While I enjoyed my time in the single-player campaign, multiplayer was a complete bust. Disintegration feels like something I would have played back in the days of the original Xbox, but doesn’t match the prestige of any titles from that era. Though it is not quite a full price at $49.99, I recommend waiting for a price drop. I’ll admit that with digital storefronts and Gamestop shelves covered in sequels, franchises, and service games, it was nice to play something that does feel new and original. If Disintegration somehow gets a sequel in the future, I wouldn’t be opposed to seeing what a second shot at this game could be.

Disintegration is a fresh concept that feels as though it was lost in time since the days of the OG Xbox but fails to stand out, especially with its multi-player mode that simply isn't worth your time.