Rewind your way to the end 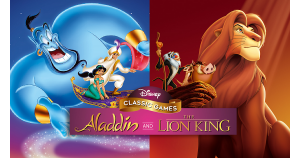 From the developer that brought us The Disney Afternoon Collection comes another re-release of classic Disney games: Aladdin and The Lion King. Both from the golden age of Super Nintendo and Sega Genesis, it is no surprise that these two have popped up now, in this era of gaming nostalgia and just before the launch of Disney+. The combo includes the Genesis version of Aladdin and both the Genesis and Super Nintendo versions of The Lion King, both of these originally developed by Virgin Games.

Fortunate enough to have one of the original developers of Aladdin on their team, Digital Eclipse was able to gain access to a lot unreleased content, also making the transition to current gen consoles easier and smoother; the 16-bit classics reborn for a new generation to enjoy. Now that the game is out on consoles, how does it measure up to the past? Does it live up to its nostalgic factor? 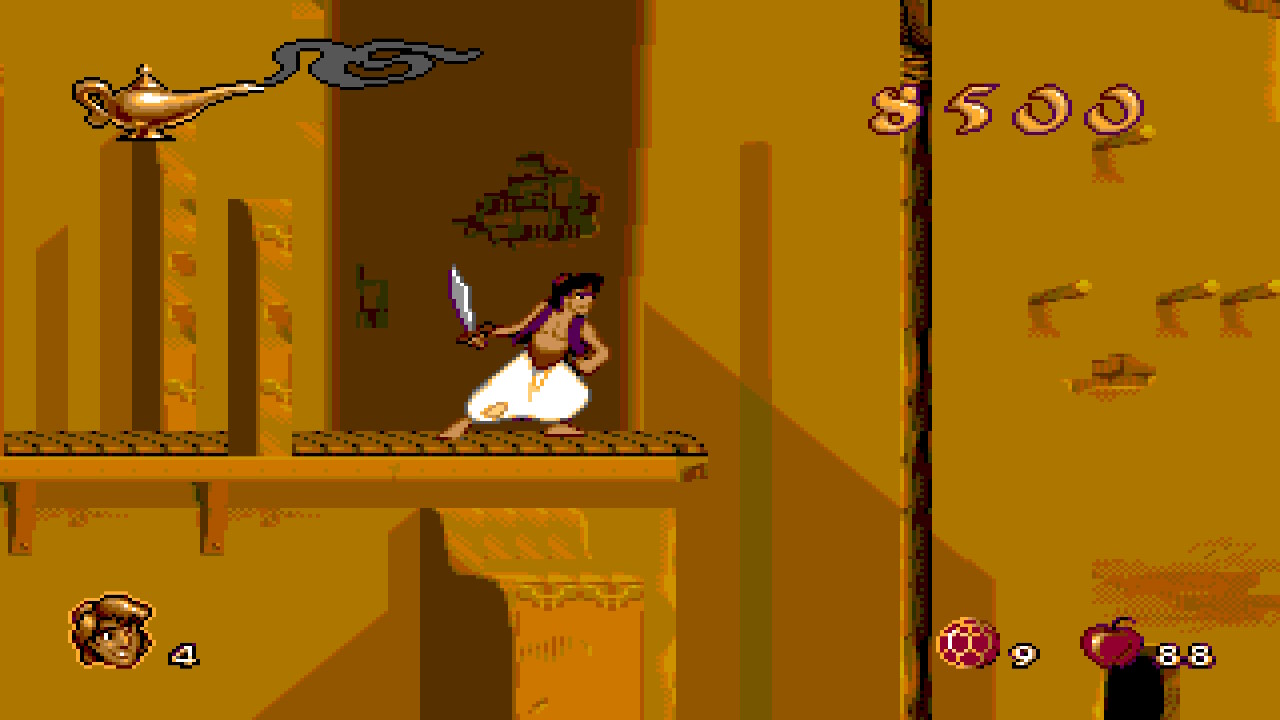 He’s back, ladies and gentlemen

Violence: Aladdin contains some hacking and slashing of baddies as you run through each level. It is all very mild cartoon violence and has about the same amount of violence as the original animated film did. The same goes for The Lion King. 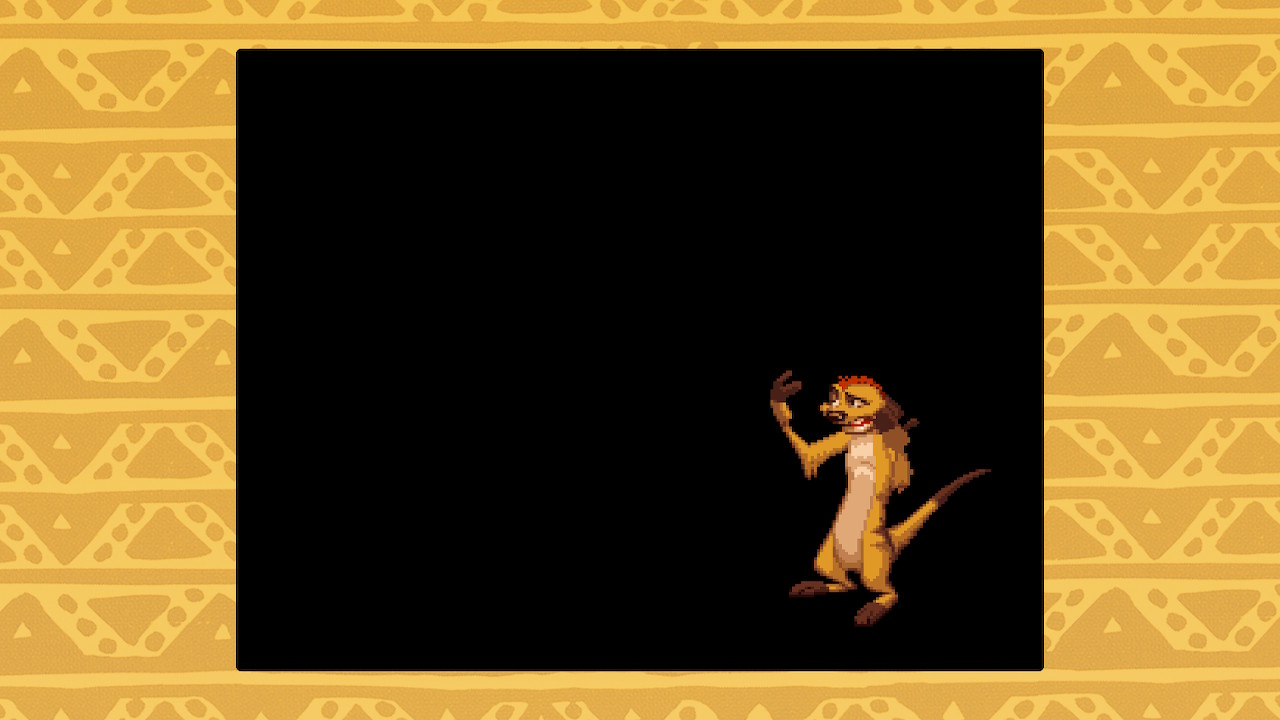 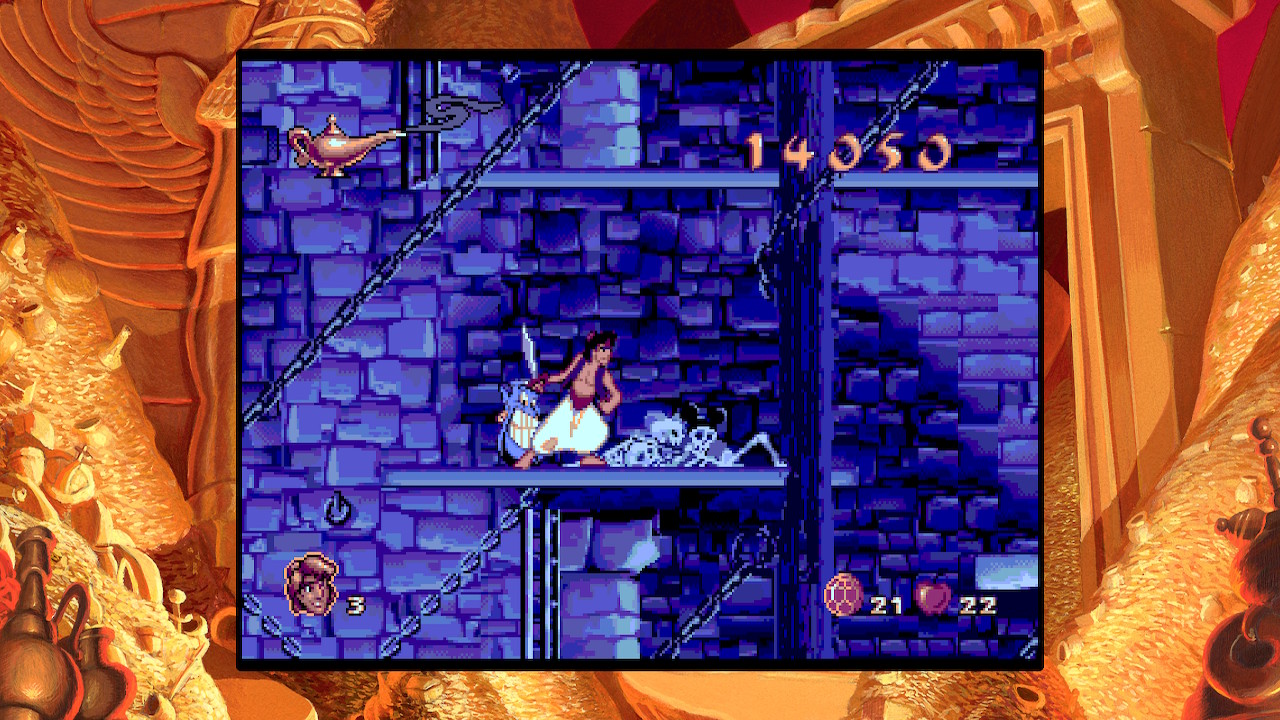 I was slightly disappointed when I found out that this bundle did not include the Capcom version of Aladdin, as that was my favorite version. But despite the Super Nintendo game’s absence, Virgin’s versions of these two iconic games play more like movies than games. Like the originals, Aladdin and The Lion King include very accurate animations of the Disney characters and have soundtracks that mimic those from the movies. These games are also known for their difficulty, which was not lost in translation. Yes, the tough levels and platforming survived, but Digital Eclipse has added a rewind feature, making gameplay accessible for those who want to complete the game and avoid the skill wall. 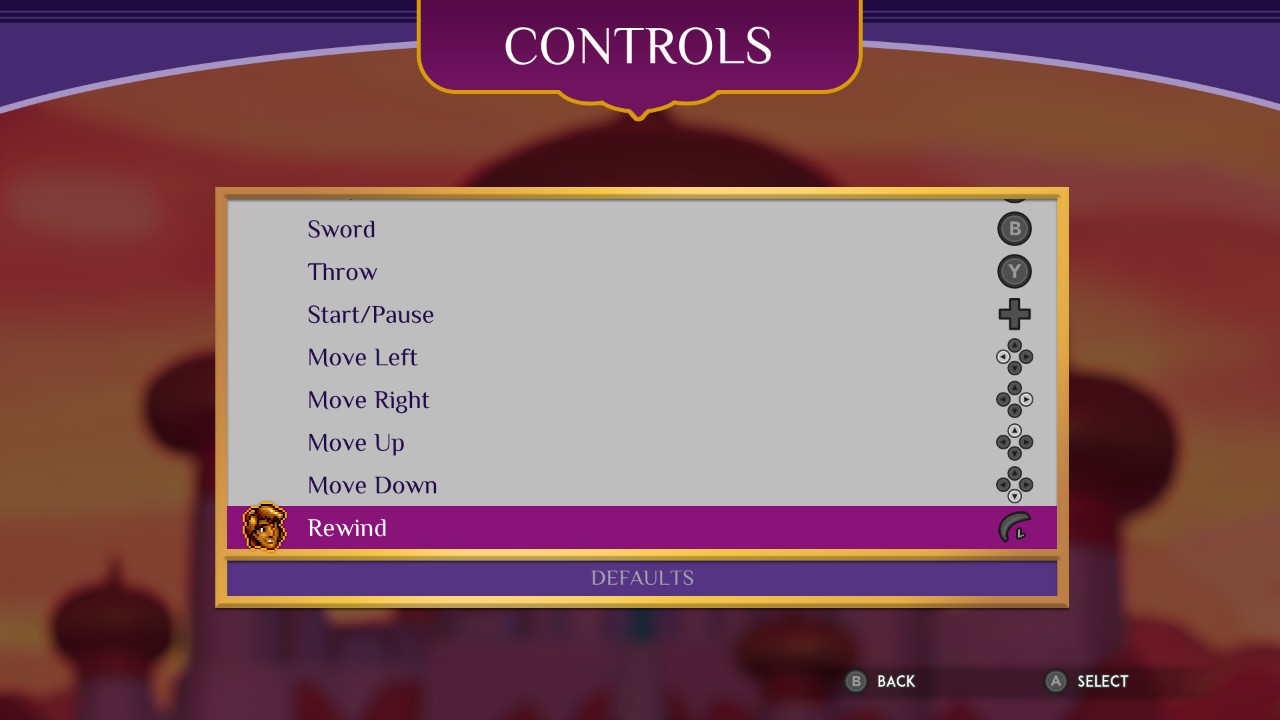 While the rewind button is a welcomed addition, especially for noobs like me, it is not the only positive inclusion. Various editions of the games can be played, including the gameboy versions. I bet you’re thinking, “wait, there were gameboy editions?” Apparently, there were. These are available for your convenience, should you want to relive the adventure through a monochromatic lens. 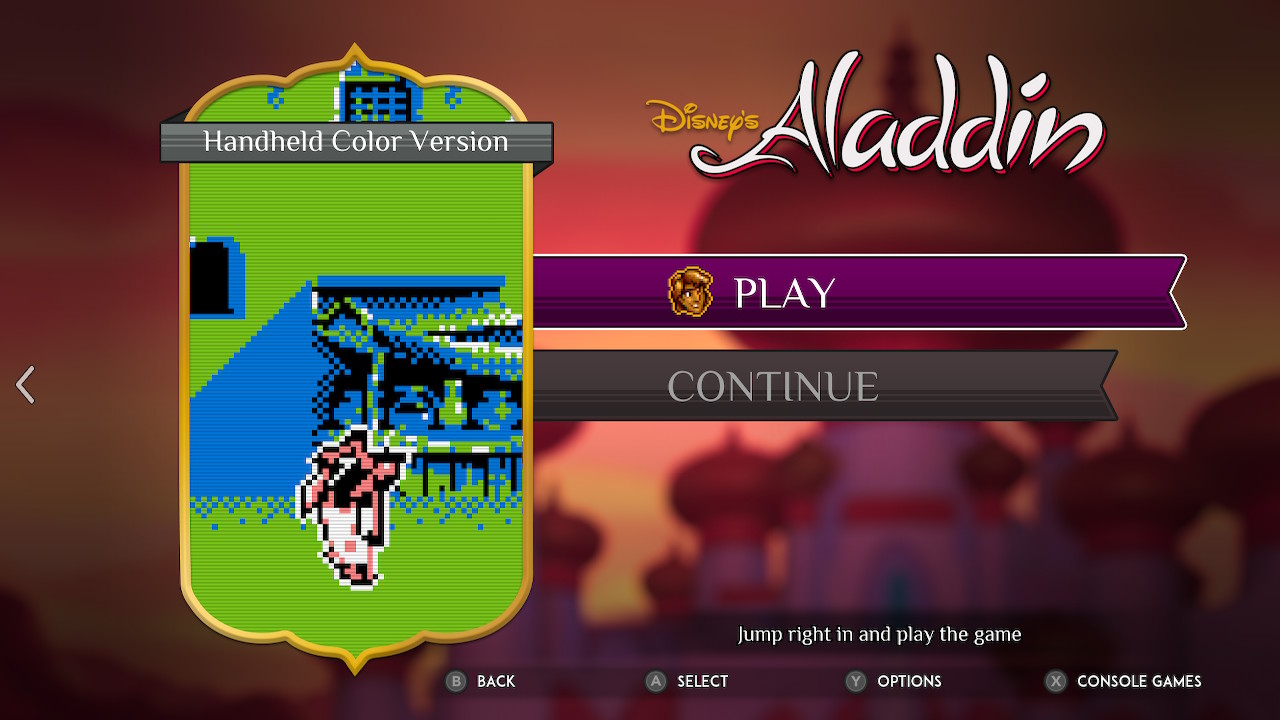 Players can try there hand at the gameboy versions of both Aladdin and The Lion King.

Another cool feature is that each game comes with a playthrough that you can sit back and watch. Not only is this helpful for getting to secrets, but the game allows you to jump in at any point, avoiding having to play through the entire game to get to a certain level or point. It seems that Digital Eclipse went through great lengths to make these games very accessible. Indeed, they are. 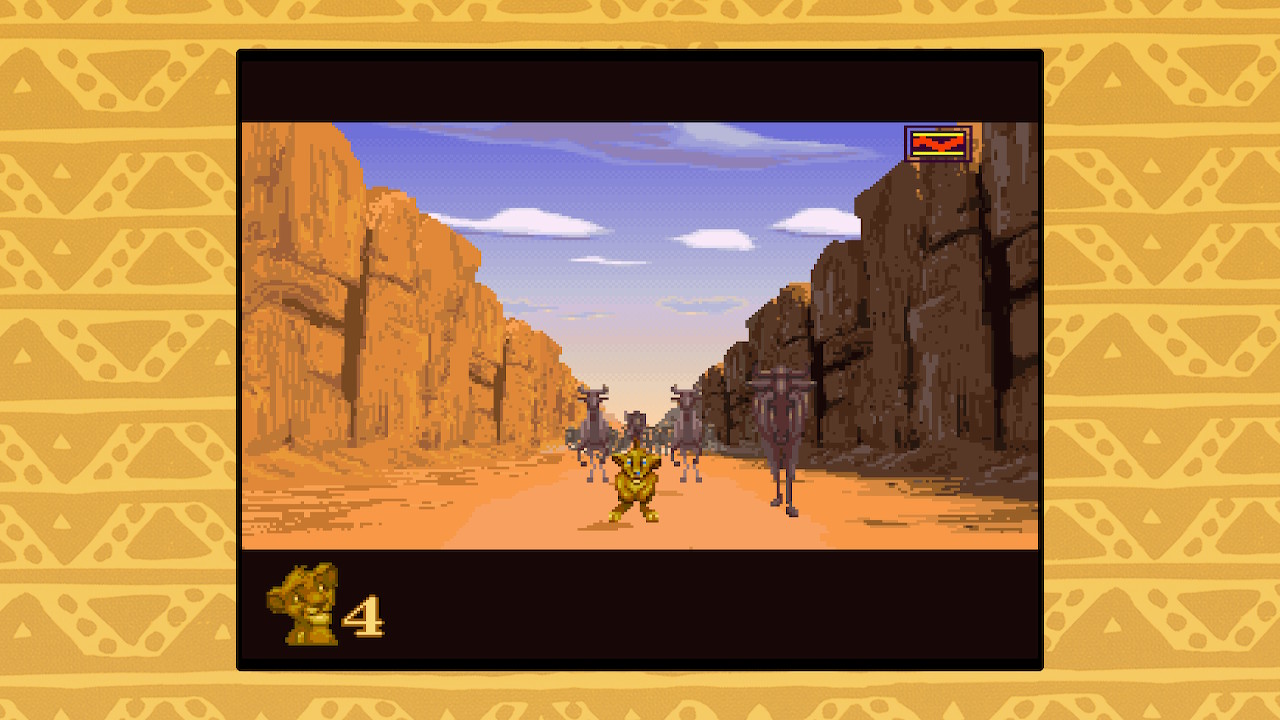 As for the gameplay, it’s 16-bit platforming at its prime. Take control of Aladdin or Simba as you jump, hack, slash, smack, and roar your way through both Disney movies. It still feels the same as it did back in the 90’s, with the rewind feature being the only difference. Playing on handheld mode on the Switch is quite convenient and feels like the best way to play these games. It almost feels like an emulation on a tablet with a physical controller, which is basically what it is. 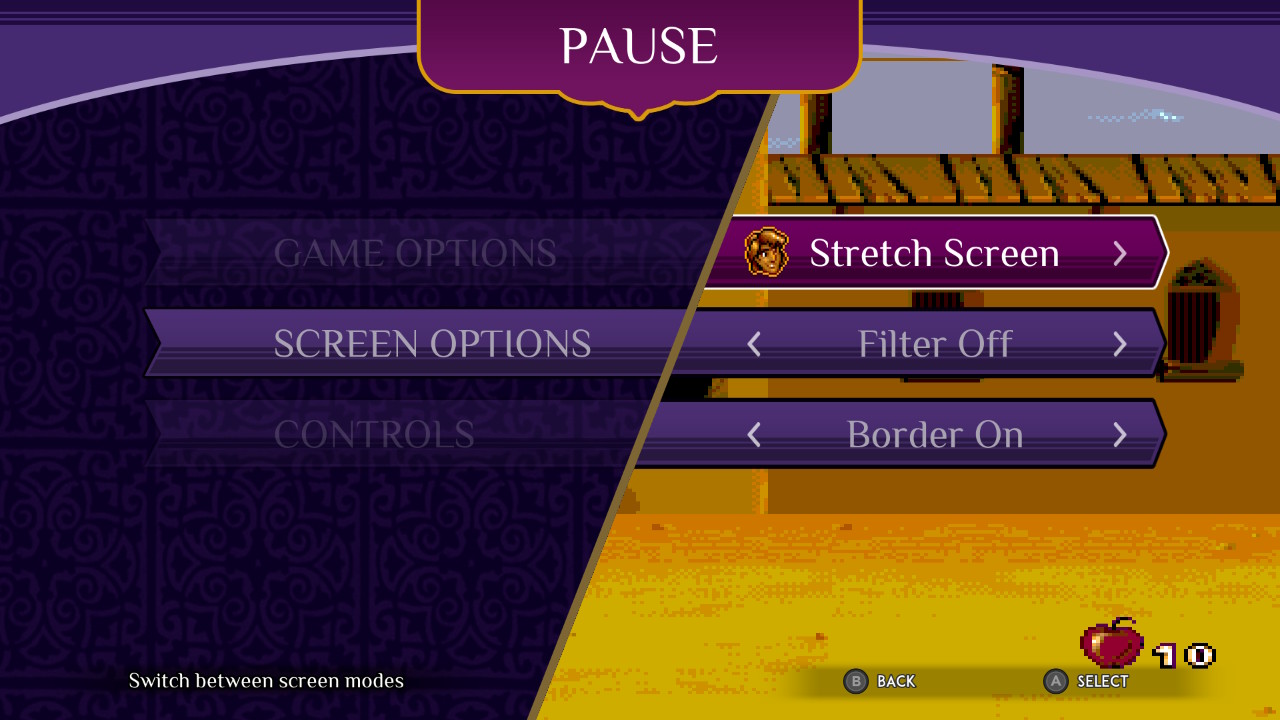 There are a lot of graphics options that allow you to switch from widescreen, to full, to windowed, and so on.

Both versions of The Lion King are available, which include the Genesis and Super Nintendo versions. The Aladdin version is Genesis only, but all games come with a Japanese mode, which is basically just the same game in Japanese instead of English. There’s also a bonus Final Cut version of Aladdin, but there is not much else different, other than minor bug fixes and camera adjustments.

To explain the rewind feature a bit more, when playing through these two games, the player can choose to rewind their progress at any point (and I do mean any point) up to fifteen seconds back. As long as it’s within that time limit, yes, even if you have died two times in a row, you can rewind all the way before those deaths. It’s quite useful, especially for those who enjoy video games, but are terrible at them (me). 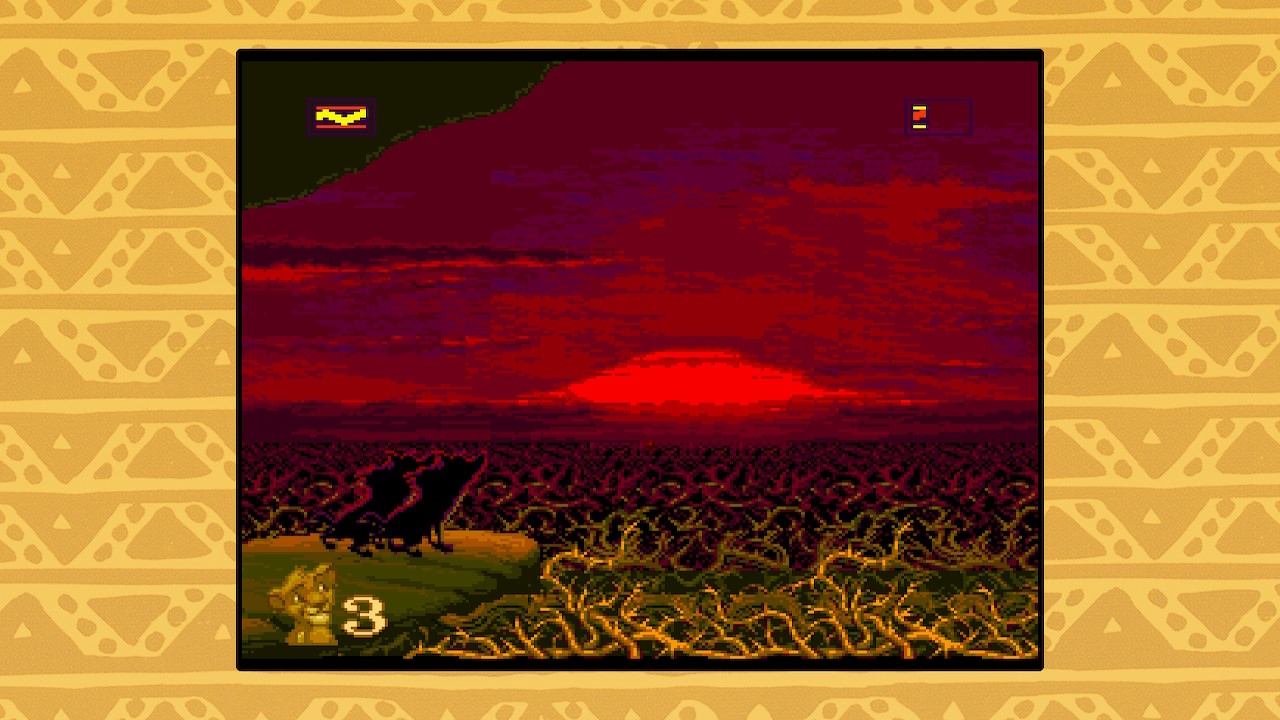 Love the sound bites from the original films too

To reminisce for a bit, perhaps my favorite part about both of these games are the Disney-like animations of each of the characters. There are even original characters in these games, absent from the movie, who look like they could have been in the movie. The amount of drawing, programming, and specific detail to mimic these animations took some time. The developers have included behind-the-scenes videos in the main menu, for those curious about how much work went into these games. Check them out!

My favorite parts about Aladdin are the different levels that were created to make it an actual game. Levels like The Desert and Genie’s Lamp were great for extra traversal and made for some tough platforming, but I loved the creativity that went into them. Having to explore ancient ruins in the Agrabah Desert and weasel your way through Genie’s blue smoke in his lamp are just a few of the fun experiences you get to relive. 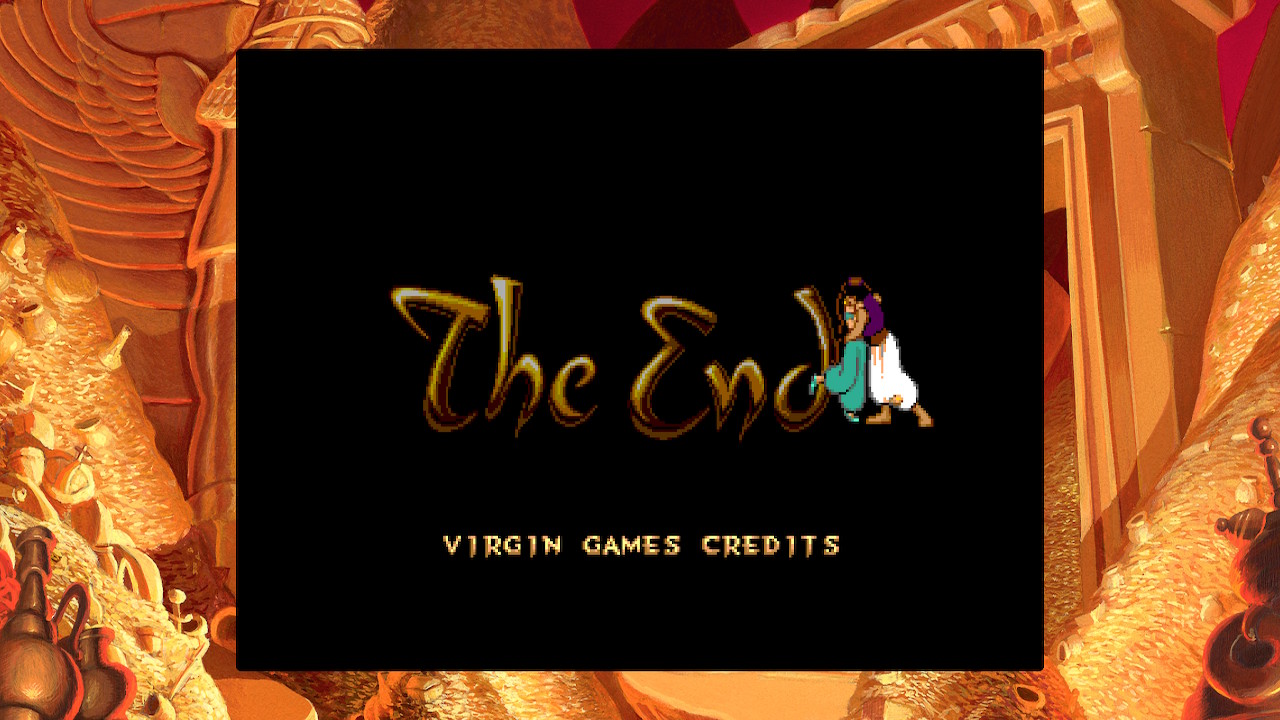 As for The Lion King, fighting Scar is iconic as it lasts the entire level and kept me at the edge of my seat. Having to fight him and toss him off of Pride Rock is every bit of epic as it sounds. I can’t remember how many times I died when playing it on the Super Nintendo. Needless to say, the rewind button is something I put to good use. 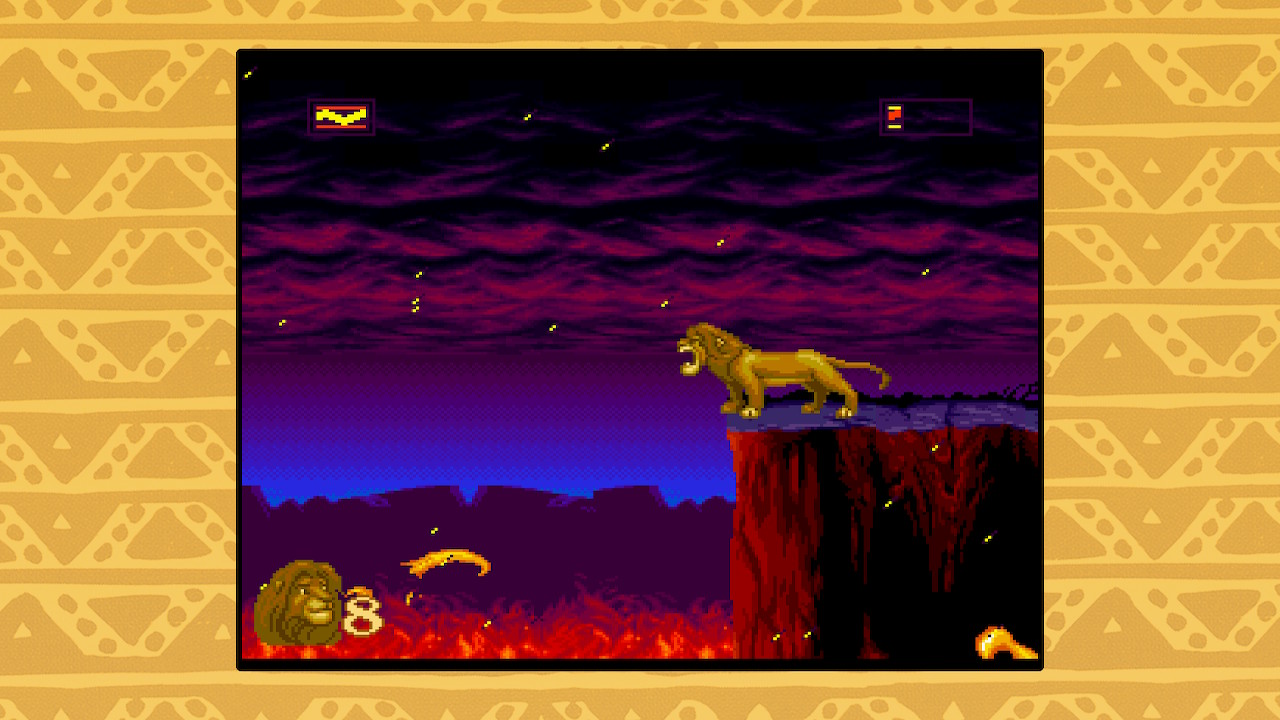 Getting to relive moments like these are what makes this game bundle re-release so great, as most of its pull is nostalgia. Even though it has so many different game modes and graphic options, it would have been even better with a time attack mode (sans rewind option) or maybe even a boss rush mode, like The Disney Afternoon Collection had. Despite the absence of these modes, the games are still great and they’re even better on the Switch, perfect for handheld mode. The price is a tad steep at $30, but I recommend it to those who want to relive another piece of their childhood or even to those who want to introduce them to their kids. You’ll have a great time together.

This remaster of the 16-bit classics is perfect on the Switch and ideal for reliving one's childhood or for introducing it to one's own children.