It all started a few years ago when I made it into SOLDIER: 1st class. After that, I embarked on a journey with my crystal caravan, conquered every Tsviet in Deepground, took on AVALANCHE, saved Spira, got Vaan his airship, and fulfilled my oh-so-obscure Focus in order to avoid dire consequences.

I’ve taken quite the journey with Final Fantasy—emotionally, figuratively, digitally, and literally. This is a series filled with iconic characters, legendary RPG game design, gripping storylines, jaw-dropping graphics, and, perhaps most importantly, music. Truly incredible music. Any fan of Final Fantasy will eagerly tell you that, regardless of the occasional hit-and-miss game, Square never fails to deliver an incredible score. From boss battle epics to tranquil romance movements, Final Fantasy knows how to generate instantaneous goosebumps, make your heart race, set you knowingly beaming, or just bring you to tears.

Seriously, play through Final Fantasy X. You’ll see what I mean about that last one. 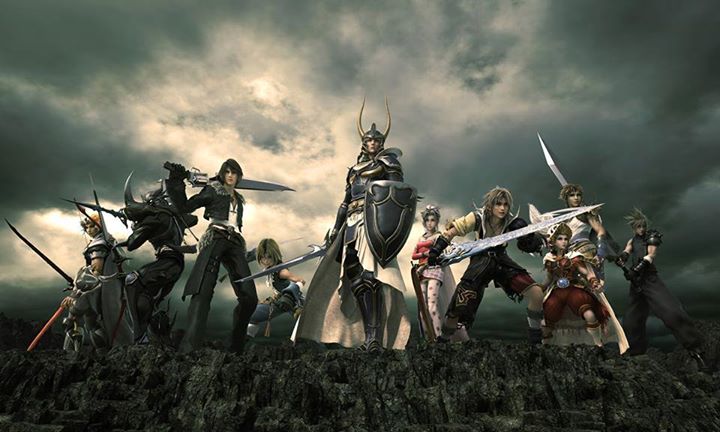 On November 23rd, 2013, I was given the opportunity to attend the Distant Worlds symphonic tour during its first-ever performance in Florida. And before I get into the nitty-gritty, let me just say right now that the experience blew me away.

I’m back from recon, so now it’s time to report in. Read on as I delve into Distant World’s Floridian advent, unveiling it in all its uniqueness. So grab your potions, hop on your Chocobo, and don’t forget your gil. Let’s mosey!

Something that stunned me about Distant Worlds was just how many pieces the symphony was able to pack into this 3-hour concert. At least one piece from every major Final Fantasy title was played, with some games getting two or even three melodies in their honor. Final Fantasy VIII, specifically, had three pieces to represent it that night, including the hit song “Eyes on Me,” sung by Susan Calloway.

Not only did Distant Worlds pick an enormous variety of music, but they also played some of the absolute best. Early on, conductor Arnie Roth informed the audience that, as this was their debut to Florida, he and Nobuo Uematsu had selected the cream of the crop for this performance. And he wasn’t joking either. In fact, this specific concert boasted some very unique features, which I’ll be covering later on. 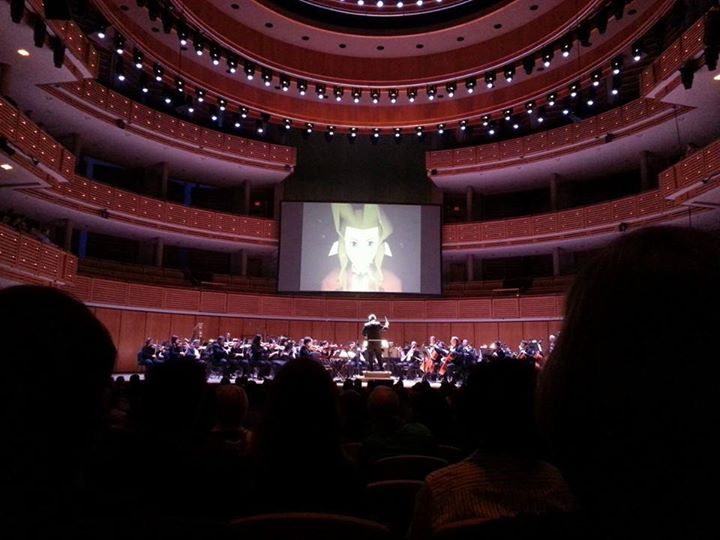 You could practically hear the sniffling in the audience…

With a wide assortment of classic themes, Distant Worlds pealed out everything from the tear-jerking “Zanarkard” to the intensity-ridden “Battle of the Four Fiends.” Sitting front and center, watching the nostalgic melodies time out to emotionally-accurate cutscenes on a big projector screen, I found myself simply soaking in the beauty of it all. I had heard some of these tracks several times via Distant World’s musical albums, yet nothing could prepare me for the phenomenon of hearing, and seeing, the entire thing live.

Distant Worlds honored their Florida debut by treating us all to a brand new, never-before-featured, piece. This compilation medley included some of Final Fantasy’s greatest adrenalin-laced battle themes, such as “Those Who Fight” from Final Fantasy VII and “Clash on the Big Bridge” from Final Fantasy V. Each of these themes are masterpieces in their own right, but hearing them all merge together into one massive movement was truly incredible.

Susan Calloway took the stage to sing three of Final Fantasy’s most beloved songs: “Eyes on Me,” “Kiss Me Goodbye,” and “Melodies of Life.” It was an honor hearing her bring such life and passion to the already beautiful lyrics. I don’t know if I could choose a favorite among the three, although seeing Squall and Rinoa’s relationship unfolding throughout “Eyes on Me” really tugged at my heartstrings.

If Distant Worlds is one-part music, it is two-parts nostalgia and memories. 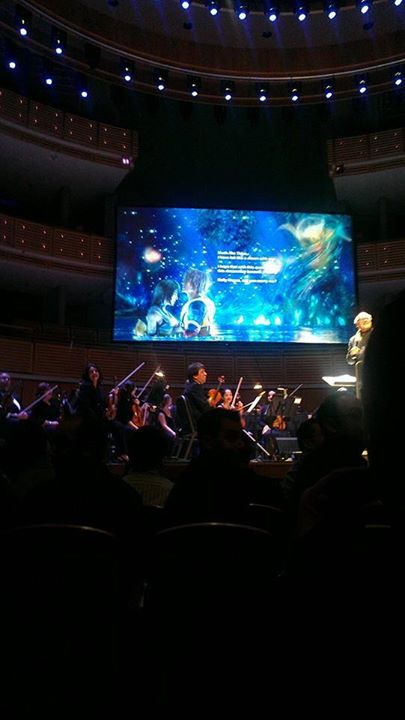 The second proposal: “Will you make my dream a reality?”

The performance completely sold out, with thousands of die-hard fans packing the seats. I know I’m not alone when I say that the absolute power in that concert hall blew me away, largely due to the unity of the fandom and the sizzling excitement of knowing that we all shared a common interest.

The dedication of these fans was astounding, and their love for Final Fantasy was front and center. Several attendees dressed as their favorite Final Fantasy character. I, too, went in cosplay as Juget “Martial Arts” from the lesser-known Before Crisis. Before the night was over, I had passed by a Squall, Snow, Lightening, Yuna, Rikku, and Paine.

Perhaps even more stunning were the two proposals which took place in the middle of the concert. The first took place before “Aerith’s Theme,” in which a short clip of Cloud proposing to Aerith screened, followed by an over-whelming cheer from the audience and a spotlight shining down on the couple. And as if that weren’t thrilling enough, a second proposal took place before “Zanarkard” played. A still-shot of the iconic “Suteki Da Ne” scene faded onto the screen, followed by a message that asked her to “make his dream a reality.”

Enthusiastic cheering greeted the beginning of every piece, with the audience breaking into additional clapping whenever a melody reached a certain peak or a certain iconic moment flashed onto the screen. When Zack Fair appeared on the screen for the first time to introduce the fan-favorite “Those Who Fight,” the audience erupted with excitement. And me? I roared like the little fangirl that I am. You can watch Zack pop up at 3:25 here.

The performance received such an over-whelming positive response that the concert went into several encores. Even after the “final piece” played and the credits rolled, the audience gave such a lengthy, standing ovation that Arnie Roth and Nobuo Uematsu decided to treat us to one more piece—none other than “One-Winged Angel,” a boss theme that the concert would have felt incomplete without. The catch was that, while the orchestra knew the piece well, the choir was absent. Therefore, in order for the piece to work, the audience would have to sing the Latin lyrics in time with the performance. Without giving us too much time to think about the weighty responsibility on our shoulders, the orchestra sounded out the first eight ominous notes and we chimed in with some on-screen lyrics to guide our tongues. Most incredibly of all was how good we sounded. Almost everyone in the theater lent their voice to the effort, with the “Seph-ir-oth!” chant being the strongest of all. 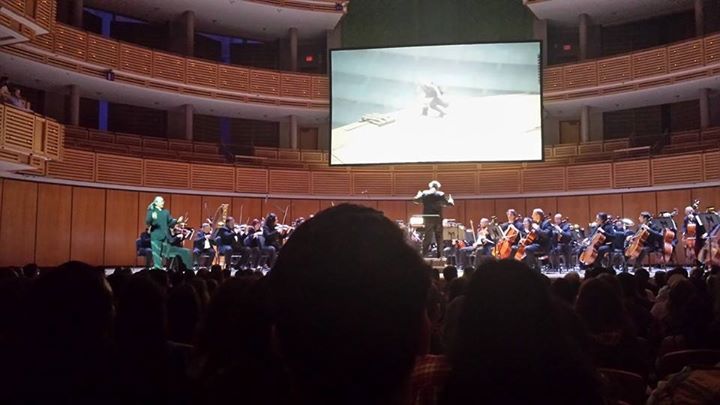 You can watch a live recording of our “One-Winged Angel” performance here. Note that, because this is filmed from the very back, some of the volume is lost, however, and that this recording cuts off some of the piece’s intro.

But perhaps the most incredible part of the concert was getting to see Nobuo Uematsu—the composer of almost every piece at the concert—in person. Though he said almost nothing on-stage, and I never spoke with him in person, his actions and enthusiasm conveyed exactly what kind of man he is. He sat in the middle of the audience, next to a regular concert attendee (who was about four rows behind us). We were even honored to hear Uematsu perform the “Dark World” theme from Final Fantasy VI, along with Arnie Roth, who played the main parts via violin (apparently, this was the deal if Uematsu was to perform live). Roth informed us that Uematsu was an incredibly humble person and it certainly showed. While he played front and center, Uematsu’s part consisted of nothing more than sound effects and the piece’s background beats. His was the most redundant part, yet his was none-the-less the most vital to keeping the rest of the orchestra on track with the melody. It was a modest piece for a modest man, but it spoke more about his character than words could describe. 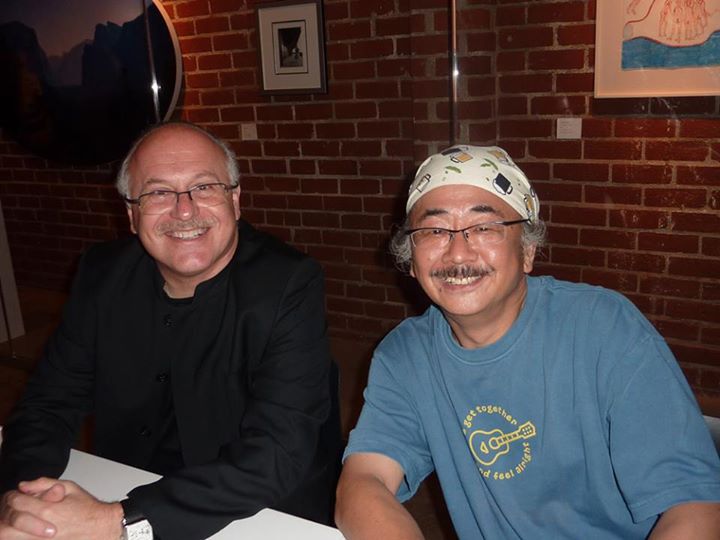 Nobuo’s love for his work was evident every time he took the stage. He enthusiastically responded to every cheer and word of love from his fans, and paid tribute to every corner of the theater when the performance was finished. Yet for all his prestige, Nobuo Uematsu is a total child at heart. When we began singing “One-Winged Angel” he jumped out on stage to encourage us. During one of the many encores, when Arnie Roth seemed uncertain where to take the performance, Nobuo announced that he would be performing a solo piece for the audience. He then whistled the “Victory Theme” into the microphone and the audience nearly fell over laughing. At the very end of the concert, when the audience refused to stop cheering, Nobuo took off running across the stage, from one door to the other, only to run back the way he had come, taking the time to give out a chain of “high-fives” in the process.

I immediately fell in love with this man. His love for his work and his appreciation for his fans was evident in everything that he did. Looking back, I’m really disappointed I didn’t dish out the extra gil for the VIP pass meet-and-greet. If ever he returns to another Floridian concert, I want to meet him in person, if, for nothing else, so that I can thank him for being so awesome.

You can watch Nobuo run across the stage at 11:00 on this video.

A Place to Call Home 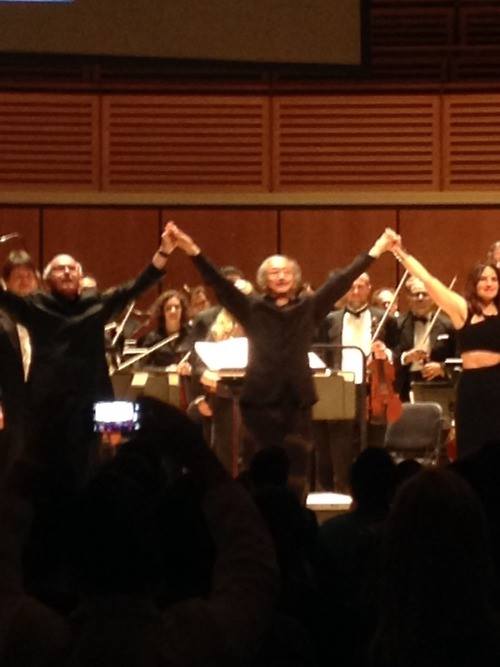 Words really can’t express the phenomenon that is Distant Worlds. My super-high expectations were blown out of the water by an even higher performance. I walked in excited and walked out stunned.

Seeing Nobuo in person, hearing Susan Calloway sing, listening to some of the most nostalgic and memorable melodies in gaming history conducted by Arnie Roth, singing along to “One-Winged Angel,” and watching it all unfold on a big screen to the excited cheers of long-time, and newbie, fans was a truly incredible experience.

And the best news of all? Arnie Roth announced from the stage that this tour to Florida may have been their first, but certainly wouldn’t be their last. And when they come again, you can bet your Phoenix Down that I’ll be there.

You can watch Youtube videos of their performances and listen to Distant Worlds tracks from their CDs, but nothing can compare to hearing, and seeing, them live. If you’re a Final Fantasy fan, you owe it to yourself to see this concert. You will be blown away.