After reading publisher SOEDESCO’s press release describing Dog Duty as a game inspired by Commandos: Behind Enemy Lines, I felt compelled to play it, and wrote a preview in 2019. Dog Duty recently exited Early Access on September 17, 2020. I decided to fire it up to see what polish the Brazilian husband and wife team of developers, Zanardi and Liza, have applied to their passion project. 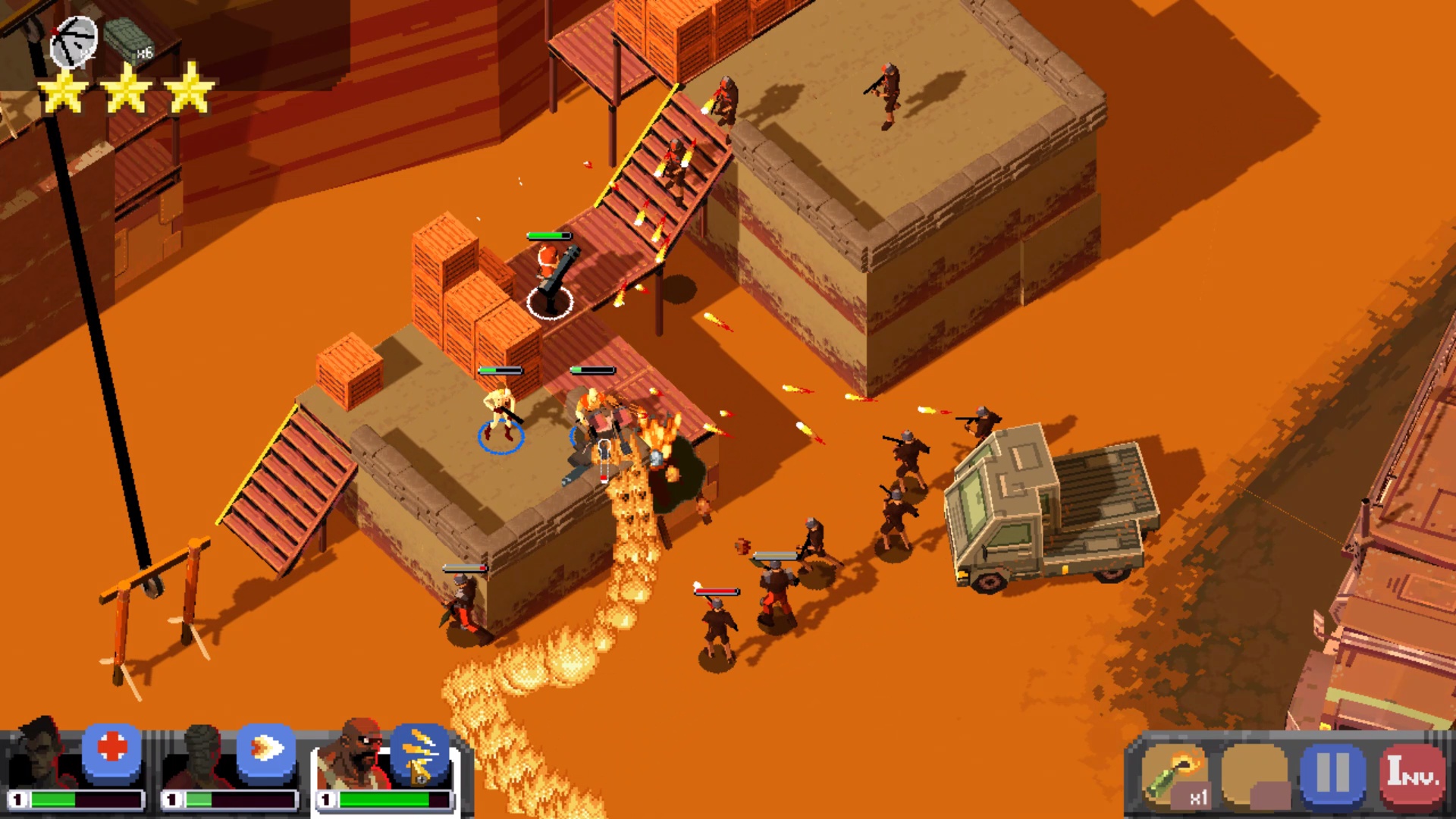 At least two members of the Dog Duty squad use the s-word so frequently, I loathe the game’s very limited voice acting. Trust and believe, players will get sick and tired of Paula saying “s***heads.” I am certain that the default big character says “eat s***” while attacking.

When units take fire, a red squirt emanates from them, but there are no splashes. Explosions send enemies flailing in midair, but there is no dismemberment. Flamethrowers, where applicable, immolate their targets, but there are no charred remains. All defeated foes simply disappear after death. 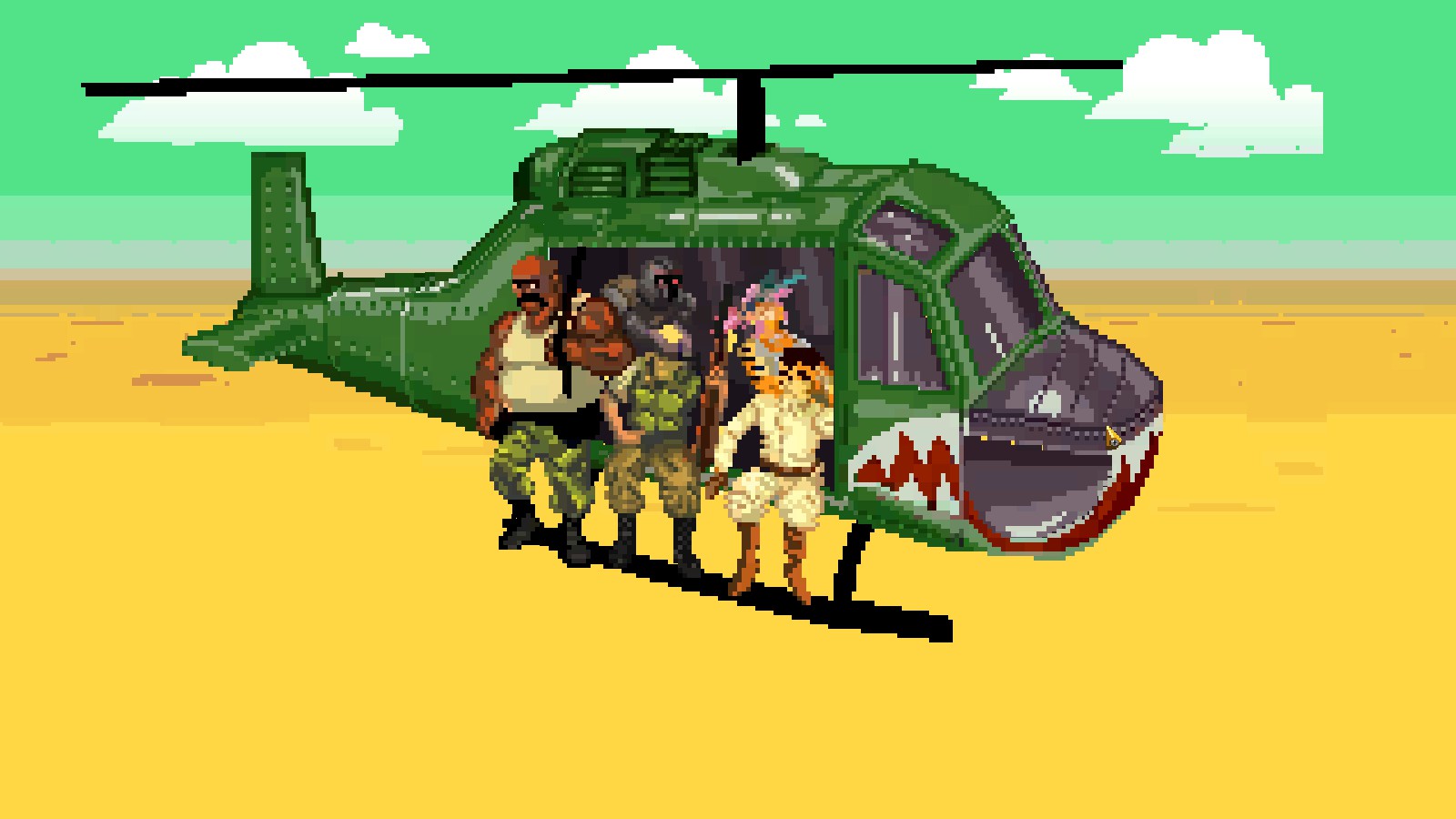 In an interview with  Linda Bendsneijder, Dog Duty‘s lead designer, Leonardo Zimbres, cites pop culture iconography like G.I. Joe and Mad Max, in addition to games such as Command & Conquer, MERCS, and Fallout Tactics as childhood inspirations for Dog Duty. The proof of these influences is evident through the gameplay, and thus, the game endeavors to do the impossible by arranging a sensible gallimaufry. In this review, I will examine these elements in an effort to synthesize Zimbres’ vision into something more palatable than Dog Duty‘s milquetoast offerings. 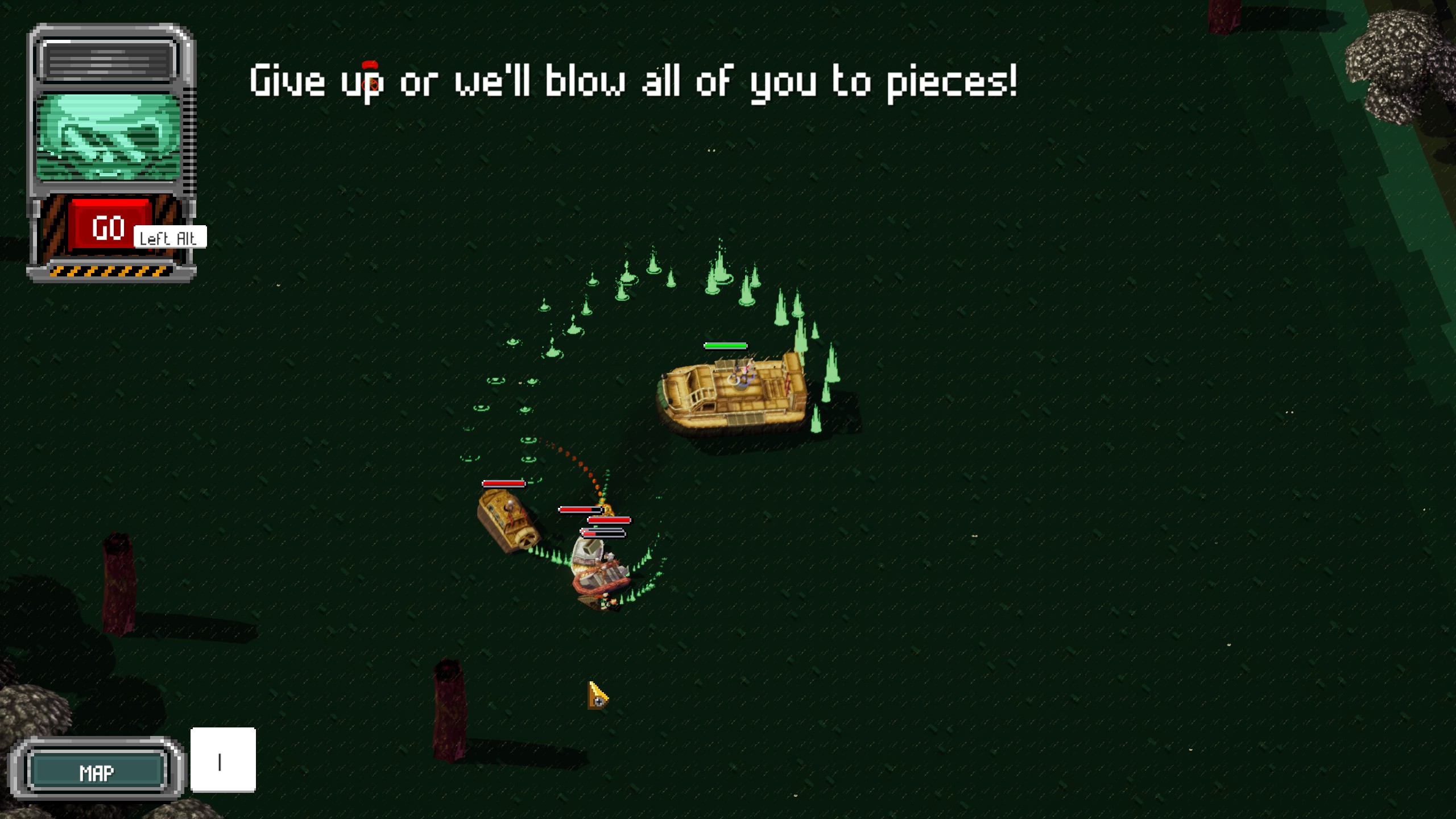 The enemies in Dog Duty exemplify the cheesy, shake-fist-at-the-heavens-when-thwarted sort of villainy, but it was not until I read Bendsneijer’s interview that I would learn about Zimbers’ affinity for G.I. Joe. The Cobra-Commander-like Doctor Octopus (no, not that one) leads his Cobra Command-like minions to establish world domination. Too much like G.I. Joe, a crew of misfit mercenaries with analogously cliché personalities boards a helicopter with the intent to deliver indiscriminate justice. Of course, “Doc Ock” shoots them down and captures all but the medic, locking them up in P.O.W. camps. The medic breaks out two of his friends, and they rampage throughout Doc Ock’s island, freeing allies, conquering territories, and discombobulating the Evil Commander’s toys.

Here, I would normally outline the playable characters, but to quote myself from my preview:

As of this writing, I feel as though there is no reason to use anyone besides Kilmer, Paula, and Madness; this is because of Madness’ super-low cooldown ability instantly refreshes his allies’ abilities, such as the long cooldowns of Kilmer’s heal and Paula’s shield barrier. Between the heal and shield, I can brute force my way through Dog Duty—no real strategy necessary besides respecting Madness’ cooldown. Perhaps further balancing will make other characters viable.

Unfortunately, Zanardi and Liza did not change a thing. In return, I did not change my strategy of blitzing around in a cluster, dropping shields, heals, and refreshes, while disregarding any pretense of difficulty. 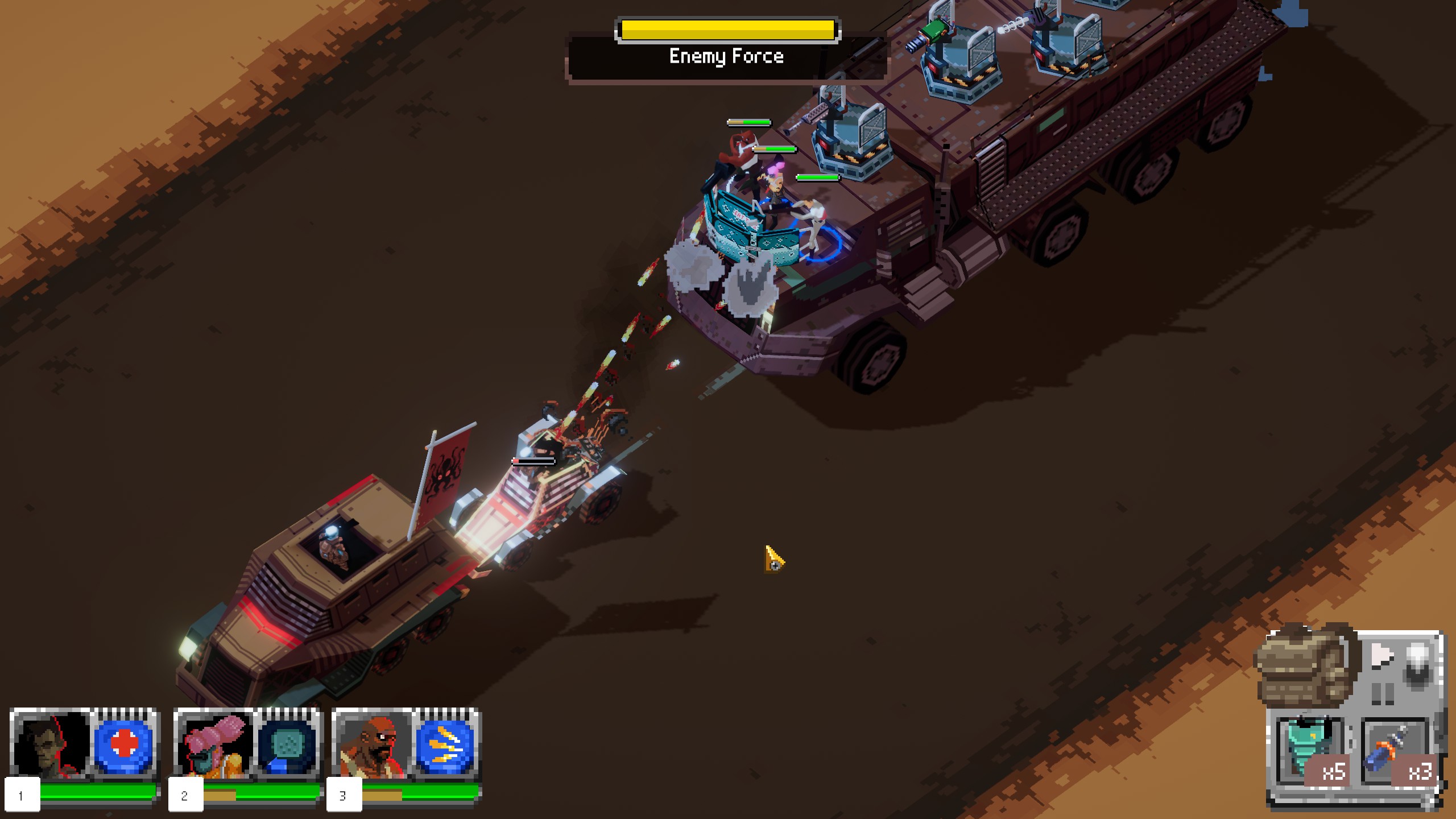 Surveying the Early Access reviews, I notice that some have described this game as a strategy game. I reject that notion outright. This game is much too easy—fighting the marauder in this year’s Doom Eternal requires more strategic acumen than Dog Duty. This game should have taken heed of the Fallout Tactics formula, because it squanders its real-time design.  It does not penalize me for blobbing with massive AOE damage, friendly fire, or insurmountable enemy reinforcements. Besides, the AI is too dumb for any of the reinforcements it does actually send to matter, and will gleefully die to my medic armed with a sniper rifle from a distance. Cover, such as sandbags and turrets, are useful, reducing the damage of incoming fire. But these elements also remind me of how much better this game could have been with a turn-based combat encounter system like X-COM, Mutant Year Zero: Road to Eden, or Fallout Tactics, that modifies the probability of scoring a hit based upon the type of cover utilized, as well as the trajectory of a shot.

Zimbres’s fondness for Mad Max shows through duels atop vehicles. The screen scrolls to simulate driving as if one has triggered a JRPG-style random battle against a small motorcade. However, not a single one of these fights is necessary. In fact, instead of clicking the “go” button on the top-left of the screen, one can just use their oversized vehicle to literally crush the competition. I cheesed the game by doing just that, and leaving one vehicle before initiating the battle, needing to only destroy the last vehicle. Doing this nets an easy $100 in a feature most gamers will miss either accidentally or intentionally. Actual random battles on the hub world, or Chrono Trigger style where crashing into a convoy begins the fight, would have been better.

In my 2019 preview of Dog Duty, I was much more enthusiastic about its direction and potential. However, 2020 has been huge for similar games; Iron Harvest, Gears Tactics, and Desperados III are three such prodigious games, the latter being a veritable Commandos-like. While it might be unrealistic to expect a two-person development team to compete with big dogs like Xbox Game Studios, these games target the same market, and therefore, Dog Duty is in direct competition for the same pool of dollars, and it is mediocre by comparison. 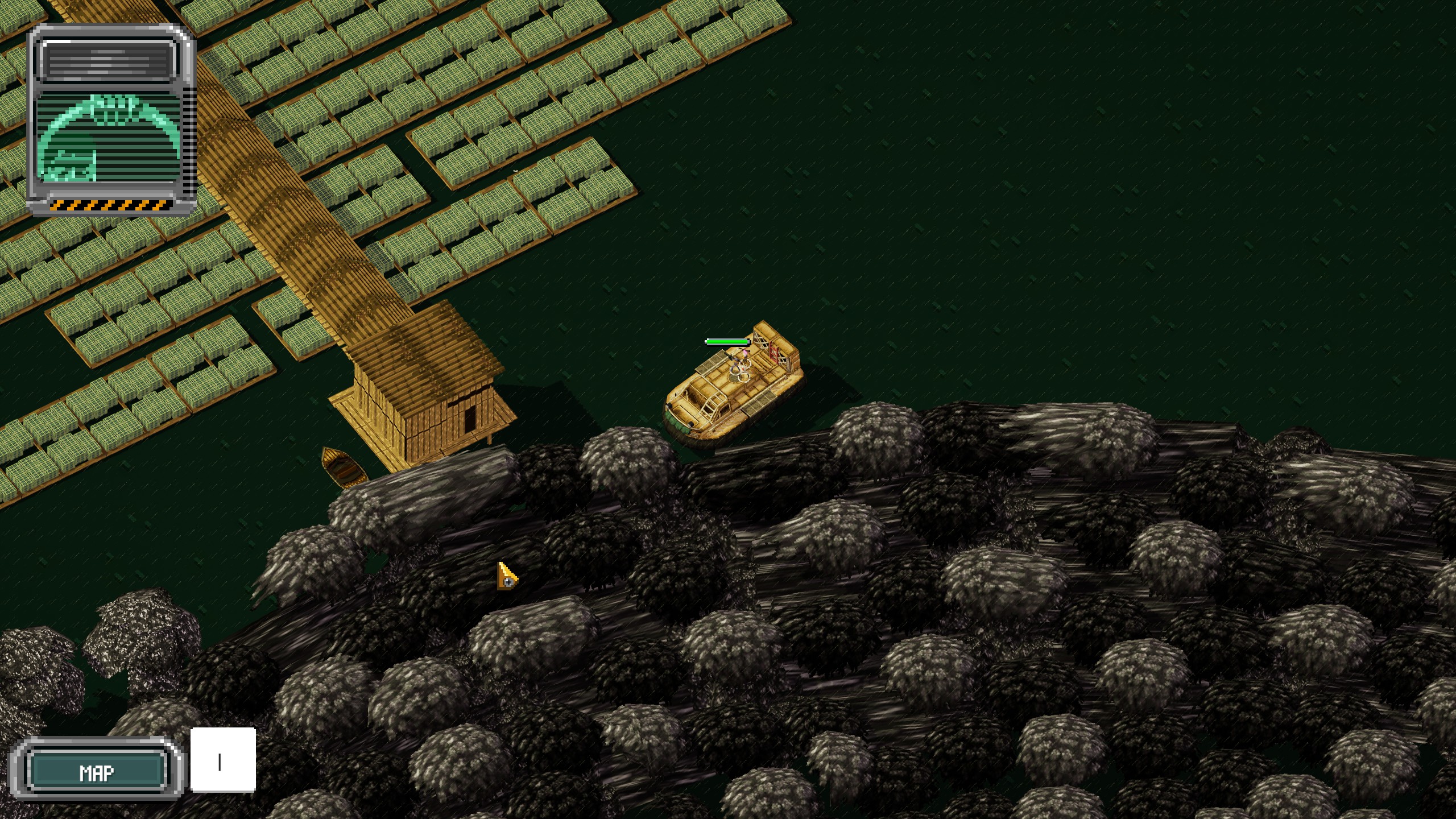 Yo what are these textures?

I would have ended my review there, having written it before attempting to finish Dog Duty, because as I have demonstrated earlier, little has changed since the Early Access version of the game. Unfortunately, I did try to finish the game, and ran into a trifecta of problems. One bug that I encountered, I did not screenshot, but I produced it by running over a vehicle in a convoy, and my truck never leveled afterward, and I could not steer it. I restarted to the main menu. 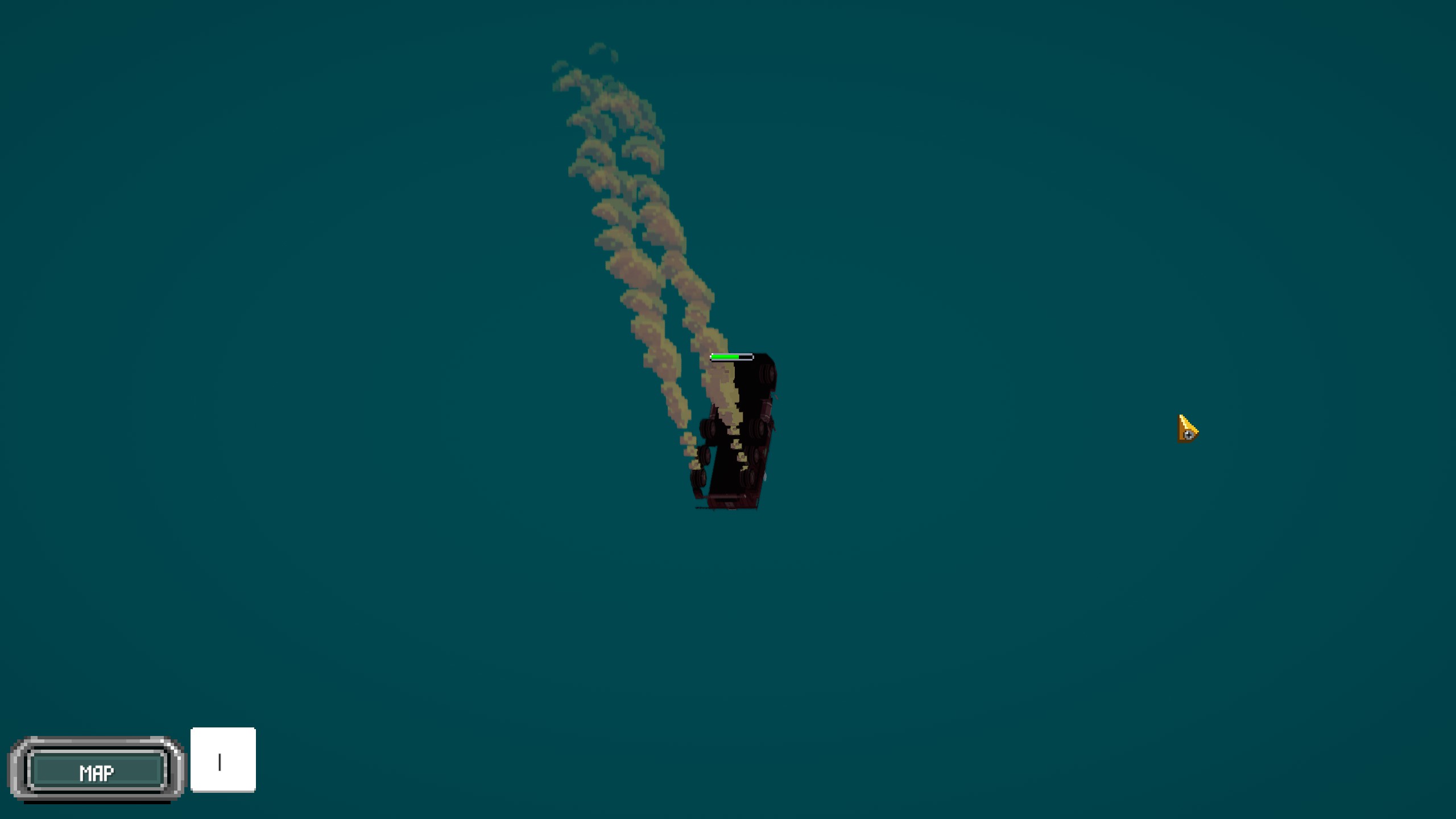 To produce this screenshot, I scaled a sand dune like a ramp, and launched into a mountain. I suppose I went over the geometrical barriers Zanardi and Liza not expecting players to “fly” over walls. Well, I actually did not fly, but I fell…and fell forever and ever and ever and ever and ever. Once again, I restarted to the main menu.

Lastly, this is the bug to end all other bugs in Dog Duty. Take note of the arrow cursors in one screenshot; these indicate that players can move to this location. In the second location, one can only see a mouse cursor, but not arrows. This indicates impassable terrain. In other words, I cannot finish the objective. I am uncertain if this bug prevents me from finishing the game, as I was unmotivated to do so.

This time, I quit to desktop.

Dog Duty is a labor of love where the fruits of that labor are average.