Though we published a preview of Door Kickers: Action Squad on December 1, 2017, our policy here at Geeks Under Grace is that we do not review games until they have exited Early Access. It officially launched out of Steam Early Access on September 18, 2018, so I am behind the ball with my follow-up review. In my defense, the game did not change significantly from the build I played almost two years ago; that is actually a good thing, because the foundation for Door Kickers: Action Squad was already solid. 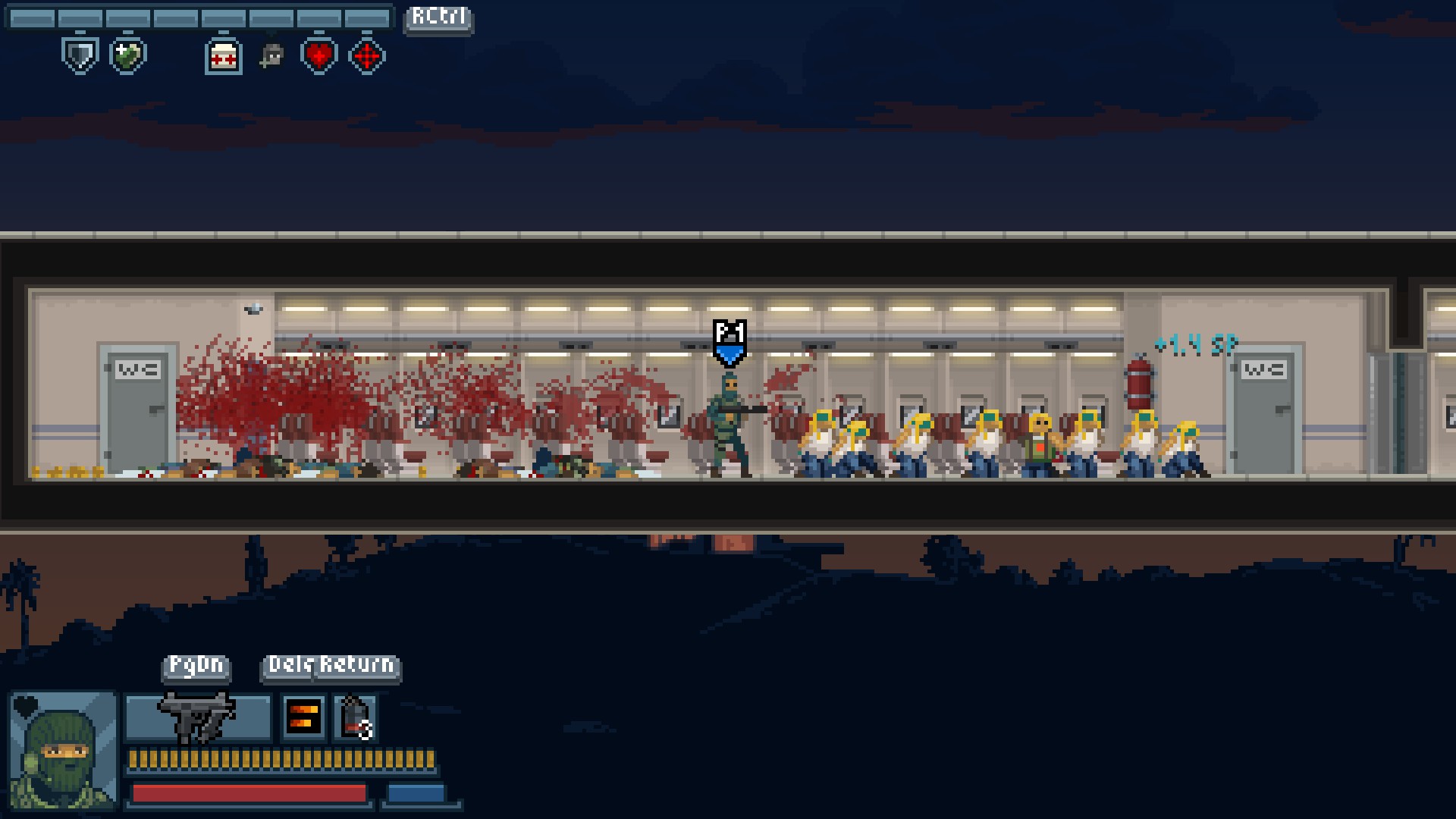 If there is any content that would give our audience pause, it would be violence. In Door Kickers: Action Squad, players should expect to regularly paint the walls with the blood of perps. Upon death, enemies will leave a splatter on the wall. A fortuitously-landed critical hit explodes the recipient like a balloon splattering all over. These days, I could see this game getting a T for Teen rating.

Though it is possible to kill hostages, this is counter-intuitive for accumulating the necessary merit for upgrades and achievement-hunting. Strangely enough, KillHouse Games and Pixelshard only rendered hostages as female. While they include an additional playable female character in the final game, the perpetuation of the Damsel in Distress trope strikes me as a miss in the 21st century. 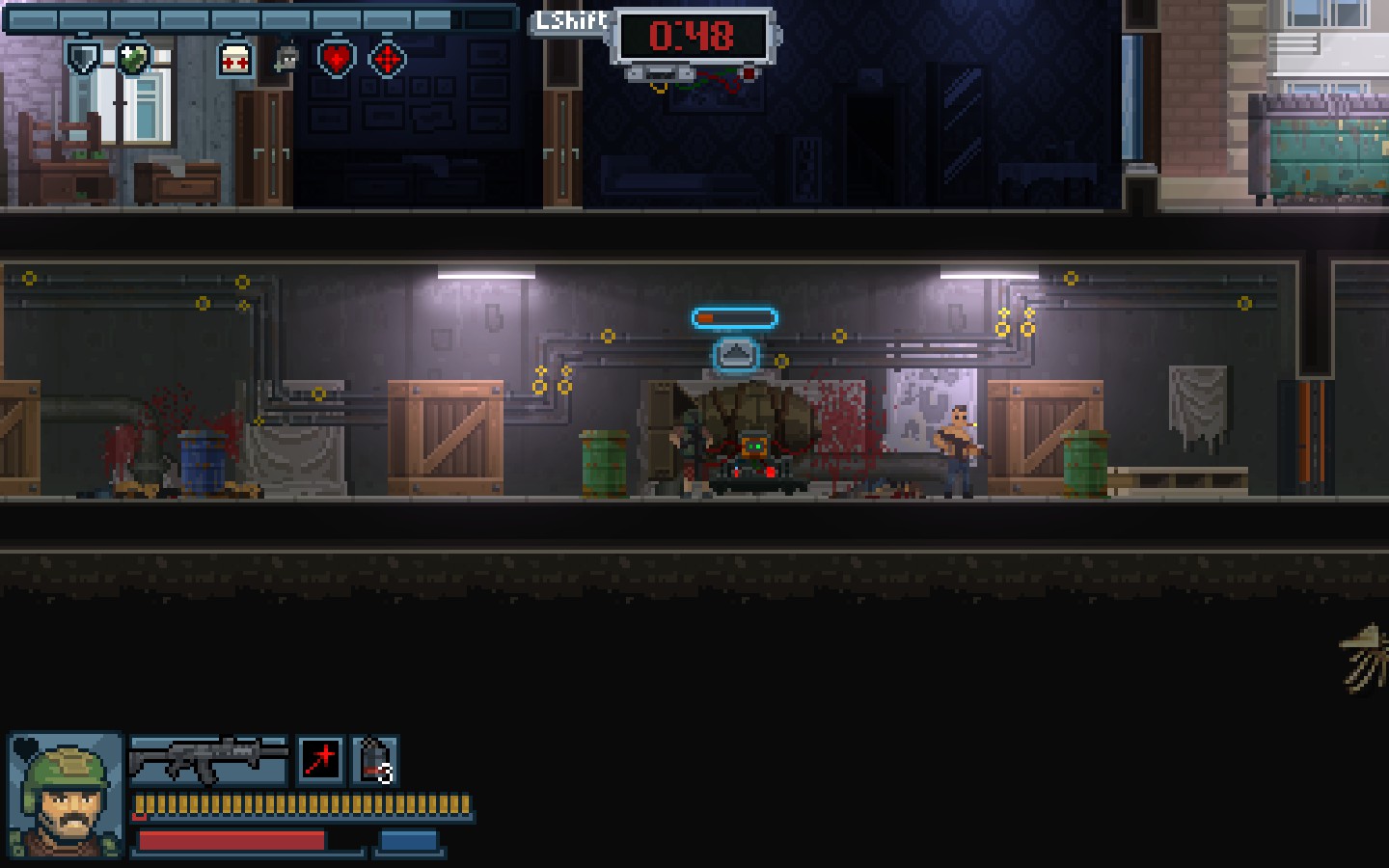 After defusing this bomb, I will have to take out that guy to the right.

As I mention in the introduction, Door Kickers: Action Squad is fundamentally the same game that I played during its Early Access phase, which I enjoyed. Over the years, I have longed for the simplicity of action games like Elevator Action 2 and Shinobi (even though Rolling Thunder was first of its kind, these are better). Door Kickers: Action Squad heralds a return to side-scrolling goodness, for it is light on platforming, high on elevation with as many stairs and ladders as elevators, and committed to enemy elimination and hostage rescue.

Thus, the main objectives in Door Kickers: Action Squad remain unchanged not only from its Early Access phase, but also its predecessor, Door Kickers. Even missions requiring bomb defusal require players to dispatch all bogeys. In this regard, the game runs the risk of becoming repetitive in the eyes of those who prefer variety. Rather than toss dozens of mechanics into the mix, Door Kickers: Action Squad focuses on optimizing a small number of things, and succeeds in its execution. 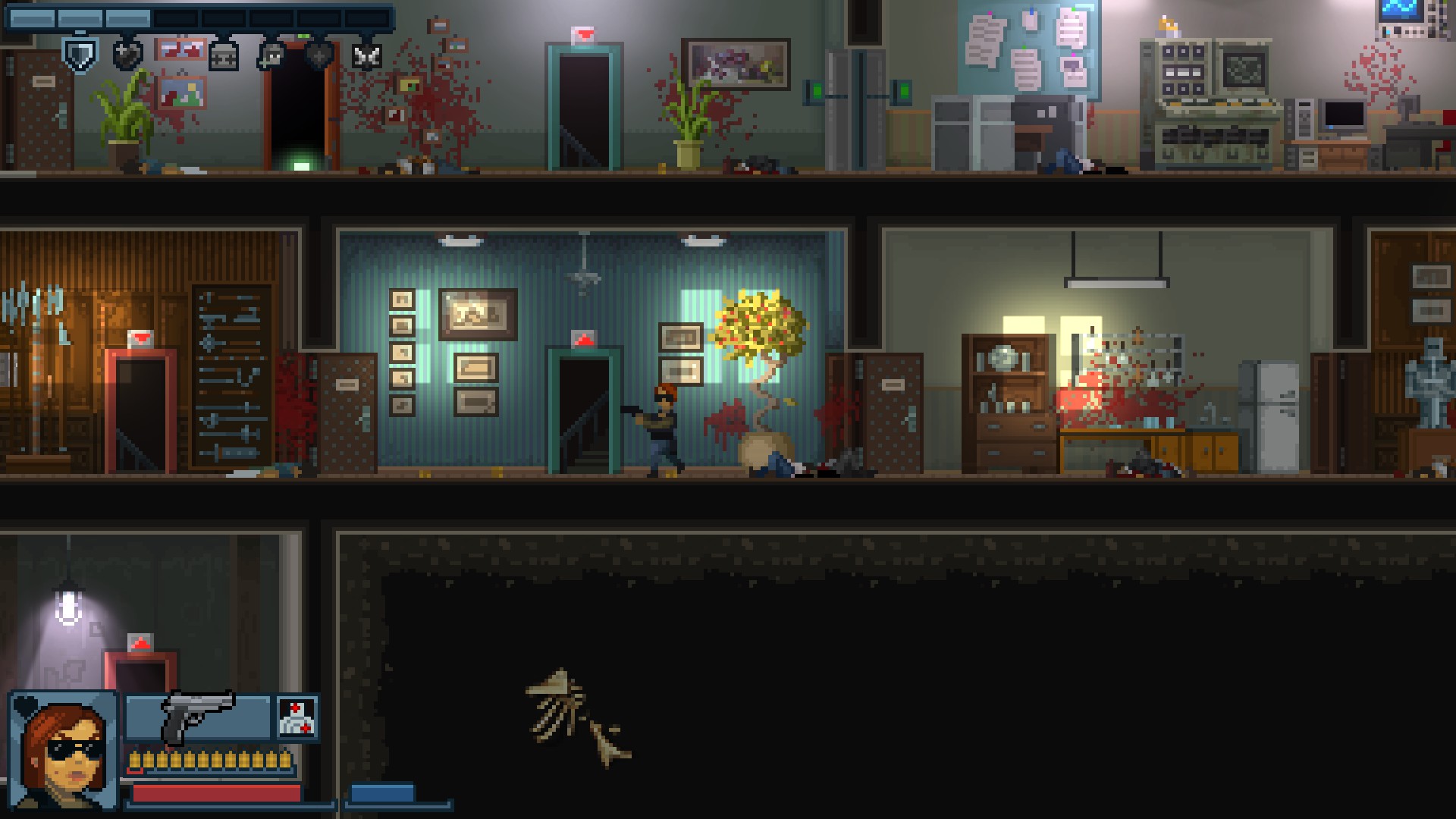 It is fun to pretend to be an operator as the FBI Agent. Difficulty curve is higher, though.

The game features six episodes plus one series of challenges; each of these contains twelve missions. Players unlock successive episodes after acquiring a prerequisite number of stars, where every operation becomes progressively more difficult than the last. I would attribute this scaling difficulty to the enemy types that KillHouse and Pixelshard have added, as they are as deadly to the player as they are to hostages.

Machete-wielders are the stronger version of the knifers, and if they get too close, can kill in a couple of swings. Heavyweight thugs who look like they are wearing MAGA hats deal massive damage with their shotguns if given the opportunity to deliver one well-placed volley; as with most enemies, he is best handled from across the screen. Arnold Schwarzenegger-looking commandos can red-dot target players from across the screen. Suicide bombers can end a mission instantly, sprinting and blowing players to gibs if they did not have enough stopping power, or if they get caught reloading when they should be firing. 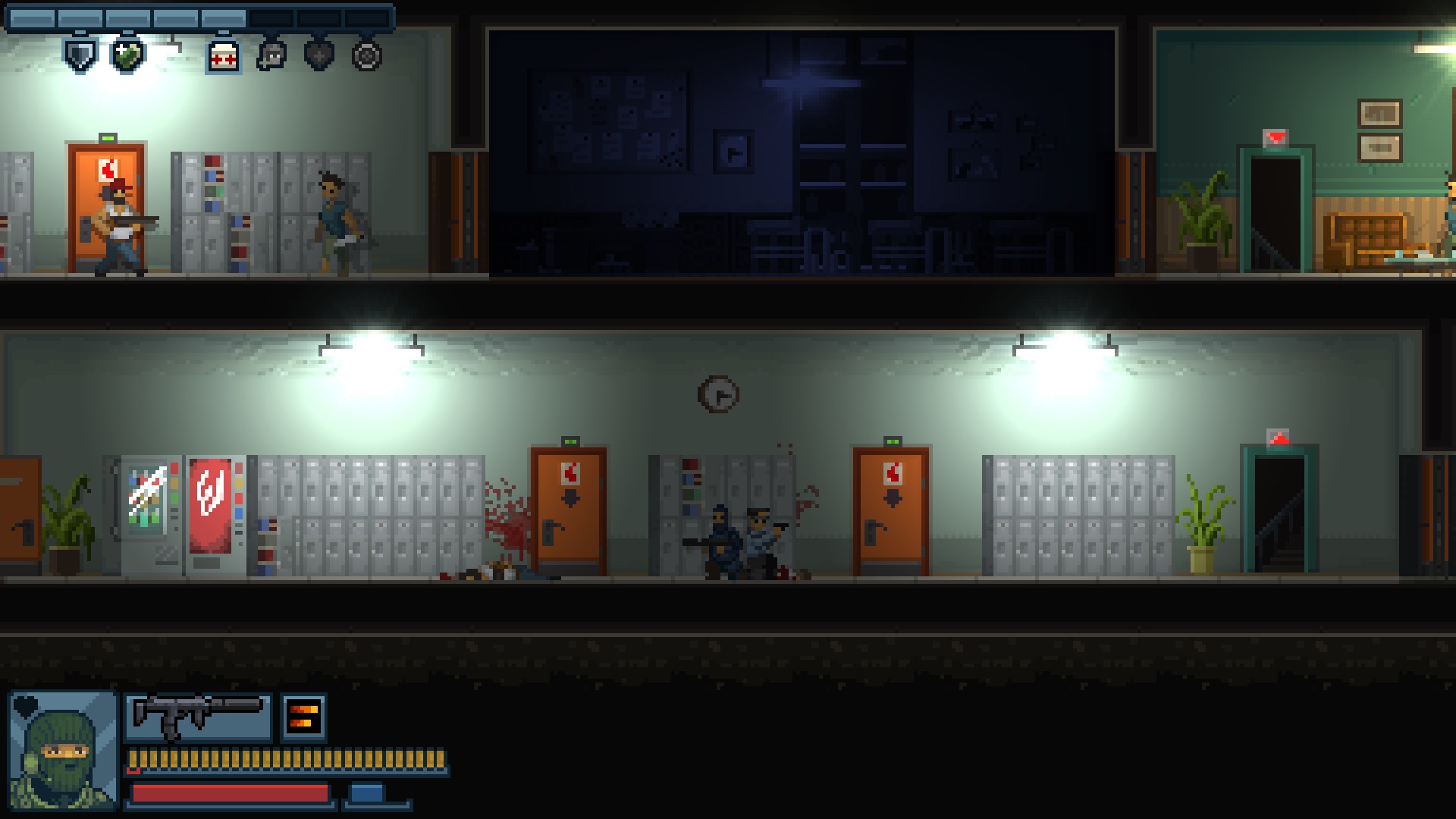 Rescue wounded officers, and they just might help out. Maybe.

Several enemy types use hostages as fodder. A crook with a golden gun grabs them for meat shields if players do not monitor their trigger-happy habits. Red bandanna-wearing bogeys will straight up execute hostages if they detect players, so one must go in stealthy or hot and fast to deal with him before he gets nervous. Trigger men will blow hostages into smithereens even as they draw their dying breath, so players will need to be sure that this enemy type is deader than dead.

Even in an über-violent police power fantasy, casualties are a technical mission fail. While it is possible to finish a mission even though a hostage dies from enemy or friendly fire, collateral damage means no three-star rating for mission completion. Players must therefore take the game seriously in order to consistently earn three stars, which not only satisfies the desire for completionism, but also because unlocking gear and upgrading character classes requires these emblems.

The six selectable classes are a rough going at first, but they come into their own after they have gained a few levels of experience so that players can invest into their unique skill trees. For example, Mr. “LoL” Difficulty, the breacher, regularly gibs enemies with his buckshot or the slug; upgraded, the slug round travels across the room, turning everyone who stands in its way into ground beef. He also eventually gains armor-piercing rounds so that when armored enemies begin to appear, he can maintain his “LoL” difficulty status. The recon class is my favorite assaulter-class replacement; he gains an ability that delays how soon enemies detect him when he enters the room, and can peek behind doors before quietly lockpicking them, allowing him to remain undetected. Give him an MP6 for ammo or an MP5 to red-dot one-shot commandos from across the screen, and he can straight up Rainbox Six-classic a map.

Sadly, the other classes are not as interesting compared to the three I mention in the above paragraph (including the assaulter). I like to role-play with the shield class during bomb defusal missions, but she definitely needs her speed, shield health, and ammo clip quantity upgraded before she becomes viable. Shield bash is practically useless. At that point, why not play one of the DPS classes instead? The FBI agent is an interesting concept, because a full special meter allows her to wield guns akimbo style, but her melee skills are also weak like the shield class. And why use the FBI agent’s roll for damage mitigation when one can simply take cover or make enemies dead with swiftness? The “off-duty guy” class strikes me as an inside-joke that became a thing.

Once players have maxed out their stars in all eighty-four possible missions, there is an option to play an infinite number of randomized scenarios. Yet the basic gameplay cycle does not change, so these still run the risk of becoming boring. Enter one of the best, unexpected features: the zombie mode total conversion that was added during Halloween 2018. In this mode, after regular enemies die, they have a chance to revive into the living dead. Not only will players have to rescue hostages as usual, but it will also prove beneficial to deactivate summoning portals. 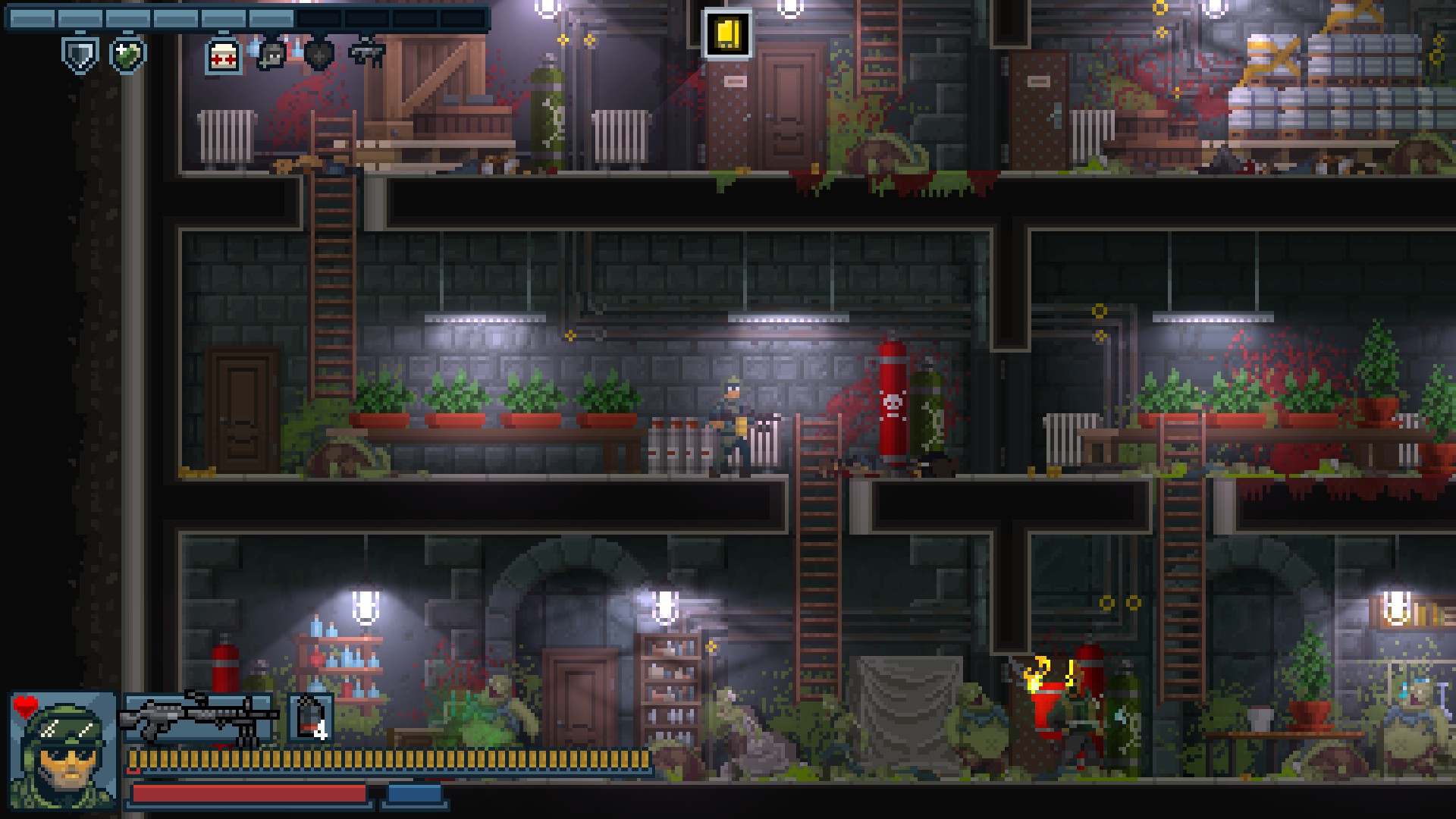 Door Kickers: Action Squad might at first appear to be a transitional game as KillHouse Games and Pixelshard finish working on Door Kickers 2. To its credit, and that of the aforementioned developers, this offshoot offers a neat package of gameplay for the price, delivered with a decent 80’s-themed soundtrack. Those looking for a title with a 90’s action game vibe to it will enjoy this one.

Door Kickers: Action Squad is the kind of "modern retro" game that I would like to see more of.