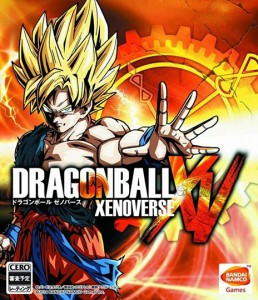 This is the 15th game for the Dragon Ball series and the first Dragon Ball game on the next gen consoles.

I’m quite familiar with the Dragon Ball series; I watched the original Dragon Ball, as well as some Dragonball Z. Truth be told, though, this is my first time playing a Dragon Ball game. That being said, I knew what to expect: a lot of action. And I wasn’t disappointed.

Shenron the dragon has summoned you, a member of the Time Patrollers, to defeat a mysterious duo who are going into the past and changing the timeline, slowly eradicating it. With the help of another Time Patroller, Trunks, you must use the Scroll of Eternity to enter various timelines and defeat those who are being possessed by this mysterious enemy in order to avoid altering, and permanently damaging, the timeline itself. Ultimately, you play through several sagas that primarily follow the Dragon Ball Z timeline of events.

DLC (Downloadable Content) will be added to this game in the future, meaning that the story may expand even further through this additional content. 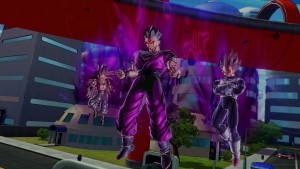 In the story, the mysterious duo possesses other characters’ bodies, and you have to defeat the characters in order to progress.

The game features a lot of fantasy violence because the game focuses on combat and the use of Ki powers. Some of these powers are linked to whatever alien race the characters are associated with. There is some blood, mostly via scrapes and cuts on the characters’ faces and bodies during cutscenes, and fights result in a lot of bruises.

There are a lot character customization options in this game. You can customize your character’s powers, race, color, outfit, and so much more. Each race has its own set of benefits and disadvantages. For example, the Sayian race has strong attack power but low health.

Much of the 3D environment, such as the trees, is destructible. The free-roaming environment allows you to fight in the air, underwater, and on land. As you complete missions, your custom character levels up and gains attributes to make them more powerful when fighting foes. You can also learn moves by playing certain characters. For example, I played Goku in one quest and gained a special attack that I could then equip to my character’s skill set. You can gain more of these special attacks when completing certain story mode missions and side missions. 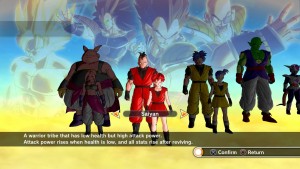 There are many races that you can choose when you create your character.

There is also a mode called Parallel Quest which you can do offline or online with other players. This mode is comprised  of various side-quests that range from defeating a set amount of enemies to defeating people in tournaments. Quest difficulty is designated by a starred rating. Fewer stars equals lower difficulty. When you take part in Parallel Quests, you select missions based on a list of various categories, starting off with 1 and 2 star missions and unlocking more difficult missions as you successfully complete them.

When you aren’t fighting, you’ll find yourself in Toki Toki City–basically the main hub of the game, full of NPCs. You can participate in missions, side-quests, online battles, and tournaments; train with a popular character, and shop for items. If you’re able to connect online, you can see other players’ characters walking around the city as well. 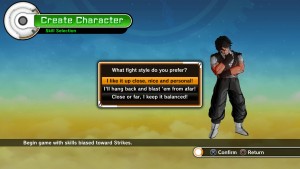 This game looks absolutely stunning–lots of vibrant colors and polished character models. The sounds are crisp and true to Dragon Ball’s anime origins. Everything from special attacks to solid punches and kicks gives off an intense, nostalgic vibe, and the voice acting will sound instantly familiar to anyone who has fond memories of watching weekly episodes of the series.

Despite its online multiplayer issues, Dragon Ball Xenoverse has a lot to offer, and fans will no doubt love it for that fact alone. If you’re the type of player who doesn’t particularly enjoy playing online, then this game may suit your needs better than not. If you want to buy the game for its online multiplayer, then you might want to wait for a patch to fix the connection issues first. Never-the-less, Dragon Ball fans will love Xenoverse for its wide customization options and fast-paced action that delivers… and delivers strong.

Dragon Ball fans will love Xenoverse for its wide customization options and fast-paced action that delivers... and delivers strong.