The Luminary is Reborn! 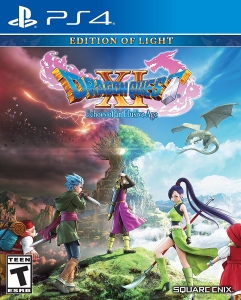 In a day and age where classic turn-based RPGs seem to be waning, Square Enix remains true to the Dragon Quest legacy. With Echoes of an Elusive Age, they’ve shown a top-tier single-player JRPG can still be both viable and beloved in a time filled with companies who think monetized multiplayer games are the future. 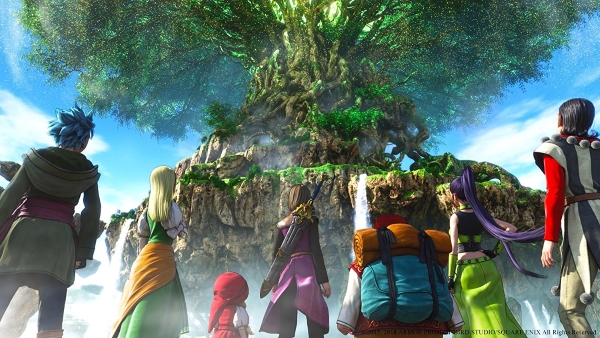 Spiritual Content: Dragon Quest has long been a franchise about the forces of light and dark. This includes demons and other denizens of evil, including skeletons, dragons, mummies, and more. Some characters are also possessed or given power by aligning with these evil forces. Our hero is called the “Luminary,” and is regarded as a chosen savior sent to defeat the game’s big bad.

The most notable takeaways from a Christian perspective, however, are an in-world religion that is a somewhat twisted melding of the classic Catholic church (where a priest will help you save and have ailments healed), concepts of life and death tied to the world tree, Yggdrasil (found in Norse mythology), and a goofy, mythical race of beings that watch over the earth from floating platforms high above our planet. There are also statues you can use that take the place of priests out in the world map.

Violence: There is animated violence in the form of turn-based combat, but there is no gore or viscera to be concerned with. When characters are defeated, they collapse to the ground.

Language/Crude Humor: There is quite a bit of crude humor in the game, much of which is sexual in nature. Some of it is meant to be lighthearted in tone, but carries somewhat more nefarious baggage. One particular throughline centers around Rab, an elderly man in your party, with a penchant for naughty magazines. By the time the narrative concludes, it will be well established that he has a lecherous streak and enjoys looking at pornography. 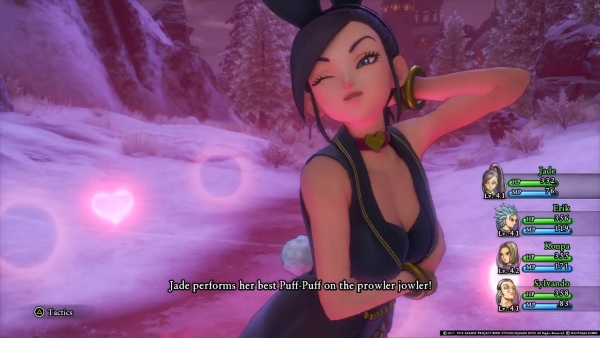 Sexual Themes: Beyond Rab’s proclivity for pornography, the game is steeped with sexualized content. In various locations around the world, you can proposition characters for “puff-puff,” which is a roundabout way to say sexual activity. It’s so centralized to the game, there’s a PlayStation trophy for experiencing every available puff-puff event in the game.

Two of your primary characters literally have skill trees that focus on sexualized content. One such move is the “Sexy Beam,” in which the character does a bit of a sultry shimmy before hitting foes with hearts. One of these characters, Jade, is even abducted by a demon at one point and is made to be his sex slave while under a spell. When she finally snaps out of it, she lashes out and destroys the demon, saying she’s stronger for having endured the intense manipulation and sexual abuse.

One of the characters, Sylvando, is portrayed as an adept warrior, entertainer, and is heavily effeminate in his speech and mannerisms. Though it’s never explicitly stated that he’s homosexual, it is heavily implied. (Fans have a 15+ page thread on GameFAQs to dispute the topic) He’s the second character with a whole skill tree dedicated to “sexy” moves.

Positive Themes: There are themes in the game that center around friendship, family, and sacrifice. There’s the ever-present theme of Good triumphing over Evil. Hope, even in the face of total loss, is also on display with Dragon Quest XI. 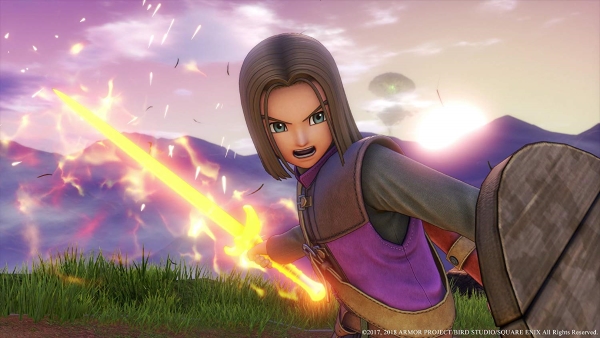 Despite a slew of recent games bearing the franchise name, the release of Dragon Quest XI: Echoes of an Elusive Age on PlayStation 4 marks the first time a proper Dragon Quest game has been released on consoles since Dragon Quest VIII dropped on the PlayStation 2 in 2004. A lot can change in 14 years and, despite a few new features and graphical tweaks, DQXI has brought the franchise into the modern age marvelously.

First, let’s discuss the gameplay mechanics. Given the franchise’s rich history (its original game, Dragon Warrior, was included with the first subscriptions to Nintendo Power magazine), it’s understandable that fans will have some expectations for the JRPG series. Rest assured, the rich turn-based combat iconic to the franchise is still around. You’ll field four characters in your party at a time, outfitting them with weapons, armor, and accessories to best suit them. Characters have skill progression trees you can grow as you level up and each playable character will be able to fill a couple of roles. Characters often have skills around a couple of weapons as well as a branch for their exclusive class. Our hero, for instance, can focus on one-handed sword skills, two-handed sword skills, and a tree to enhance his role as the “Luminary.”

I want to make note of one particular mechanic. This time around, they’ve added the ability to assign AI behaviors to each character. This allows you to specify whether they should behave in a certain way (like going all-out on magic or focusing on healing), acting in a “reasonable” manner, or whether the player will control them. As a long-time JRPG fan, it feels a little…unpure, for lack of a better word, to use AI to command your characters, but with a game that took over 70 hours, it certainly eased a bit of the grind. In fact, I only had to manually control the entire party for a handful of difficult boss encounters. I was able to just sit back, quest and grind without worrying about too much, and enjoy the story. 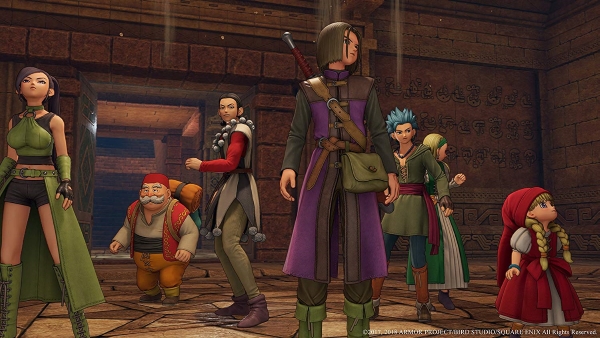 Speaking of the story, I’m genuinely surprised by Dragon Quest XI‘s narrative. The tale itself wasn’t particularly that groundbreaking, but the characters and their tales were fantastic. Despite yet another silent protagonist, each character is wonderfully voiced and all the dialog is spoken. It helped turn what could’ve been a well-worn light-versus-dark tale into a memorable fantasy story with a ragtag crew I grew to love. From the lovable thief to magical twins (one of which looks like a child) to a martial artist princess and more, each has genuine personality, goals, and aspirations you’ll come to identify with and love them for.

The narrative does take some turns that made me roll my eyes a few times. In particular, the game pulls a fast one, and let me think I  was near the end of the game, then yanking the rug out from under me for another 30-40 hours. That move is exasperating, but it lets you see the world from a different perspective, go on some new adventures, and see the world in a different…, er, light so to- peak. Oh yeah, time travel is also involved in some of this. My only real complaint with the story is that it takes so long to conclude. My time spent there, however, was enjoyable. 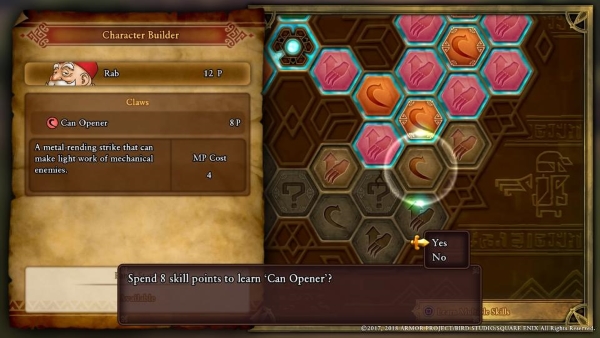 Since we’ve discussed the voice acting, let’s further discuss the aesthetics of Dragon Quest XI: Echoes of an Elusive Age. Of course, as we’ve said, the voice acting is phenomenal. I love hearing the various British accents (and yes, that includes accents from all the British Isles). They’re all performed with such love and respect, they genuinely helped bring the Luminary’s tale to life. The game’s soundtrack is, unsurprisingly, top-notch as well. With beautiful orchestral scores highlighting all of the game’s emotional moments, you’ll surely be drawn in by the soundtrack.

What about the visuals, though? Artist Akira Toriyama (Dragon Ball Z, Chrono Trigger) has clearly has left his mark on this franchise. His character designs are brought to life with brilliant animation and gorgeous, eye-popping color. The world is beautiful and vibrant, even when darker thematic elements show up. Dragon Quest XI is a gorgeous game your eyes will enjoy drinking in from start to finish. 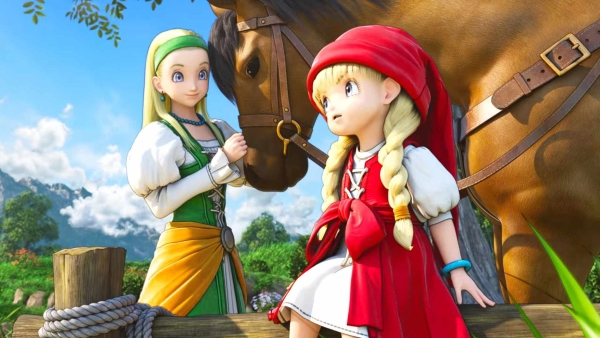 Though its overarching narrative can feel a bit rote, Dragon Quest XI: Echoes of an Elusive Age has been true to its legacy. It delivers a JRPG with a beautiful, vibrant world, memorable characters and quests, and fun combat, even if you opt not to be hands-on with it. Classic JRPG fans will get plenty out of this game and then some. It’s encouraging to see studios put so much love and care into a franchise that’s been around over thirty years. I hope this encourages them to make it thirty more.

Dragon Quest XI is a gorgeous, fun RPG with likable characters and, though predictable, a well-told story. Classic JRPG fans are sure to enjoy their time with Echoes of an Elusive Age.