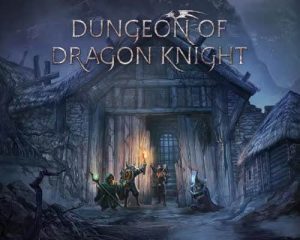 Dungeon of Dragon Knight has been in Early Access for nearly two years. Directing a small team of developers in Shanghai, China, Hector Xiang‘s goal was to pay homage to games like Dungeons and Dragons and Legend of Grimrock. Set to officially release on July 10, 2019, there is plenty of hum and bustle surrounding this game, earning both praise and critique. The developers have remained consistently dedicated to DODK, paying close attention to suggestions and comments, making changes when needed. But despite their attention to detail, is this dungeon crawler worth the adventurous downward trek into darkness? 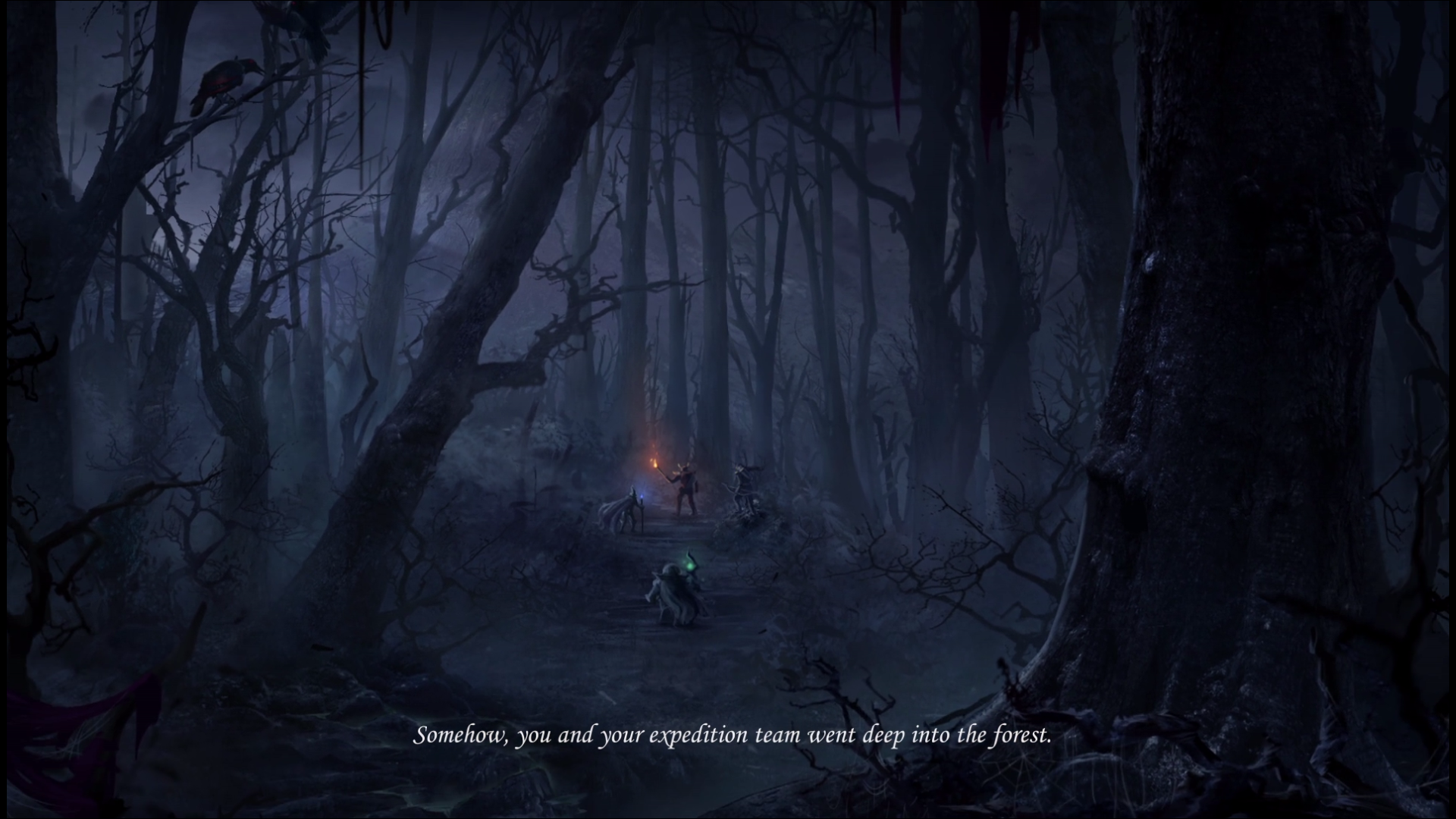 Violence: DODK has classic dungeon violence. The foes are lifelike and gruesome in nature, one of the most gruesome being a bloody skeleton. Whenever any mammalian creature is defeated, such as a rat, a bloody pile of guts is left behind. 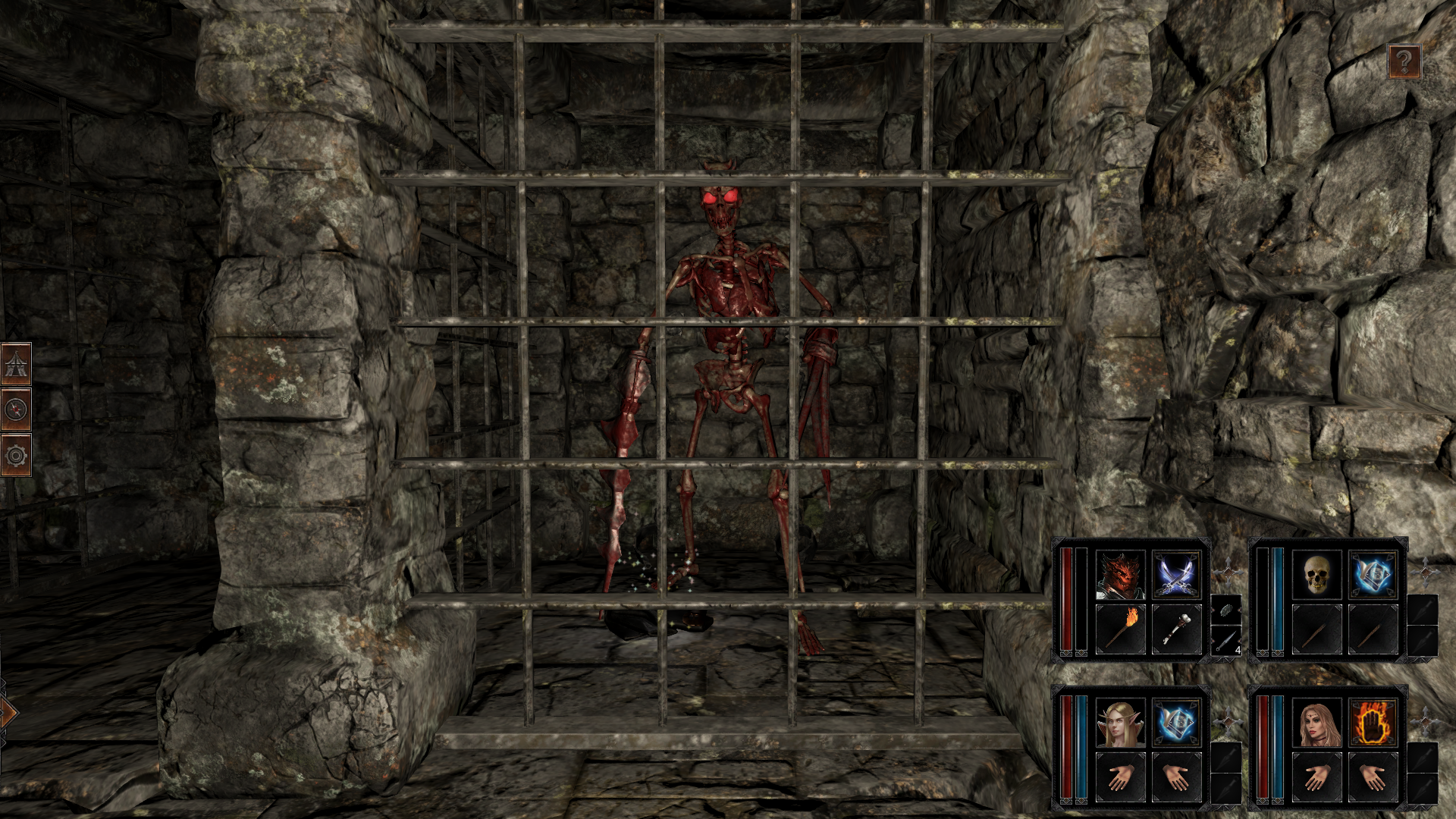 Spiritual Themes: In all of its RPG glory, DODK has wizards, mages, and magic. The player can combine different runes to create a spell in order to conjure a fireball, a gust of wind, and other elemental incantations.

Sexual Themes: The only questionable theme in the game is the fact that the woman who enlists you in crawling through this dungeon has generous cleavage.

Dungeon of Dragon Knight is a dungeon crawler that attempts to combine exploration from Dungeons and Dragons, classic RPG elements, and the ambiance from Legend of Grimrock.  It’s meant to be a callback to games like Dungeon Master (1987) and Eye of the Beholder (1991). In these games, the player navigates through a 3D first-person view of a dungeon, solving puzzles, evading traps, and defeating enemies encountered. DODK has all of the ingredients of the classic dungeon crawler.

Trapdoors are no fun

To move throughout the dungeon, the player must use the ‘WASD’ keys, with ‘Q’ and ‘E’ used for turning. Movement is tile based, so one push of the forward key means one tile of movement. Holding the forward key down can sometimes lead to frustration, because you may end up moving too far into danger or falling to your death. There were one too many times that I moved too quickly into a trap, attempted to stop in time, but died nonetheless. I ended up reverting to tapping the ‘W’ instead of holding it down. 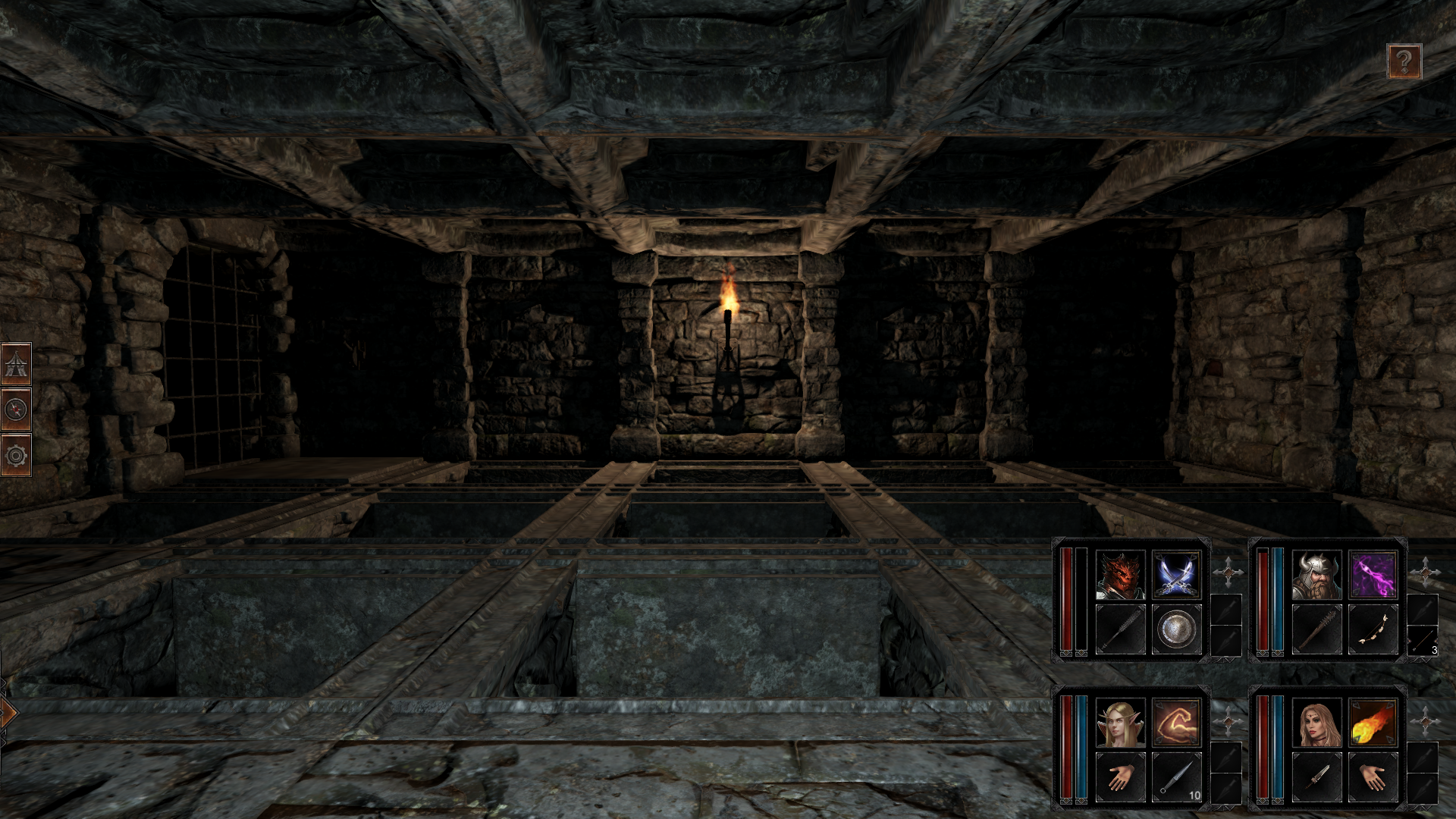 Enemies move the same way on the field: one tile at a time. When locked in combat, knowing your attacks and having all team members ready is crucial to successful battles. Every playthrough includes four teammates which can either be selected or randomized before beginning the dungeon crawl. Dwarves, wizards, warlords, and elves are just some of the races and jobs that are available to choose from. I began with a dragon warrior, a dwarf warlord, an elvish cleric, and a human mage. The warlord, cleric and mage can all use magic, but the dragon warrior can only use weapons to attack. I would always try to have the best spells and strongest weapons equipped, but would have daggers and maces equipped as backups should the magic users run out of manna. 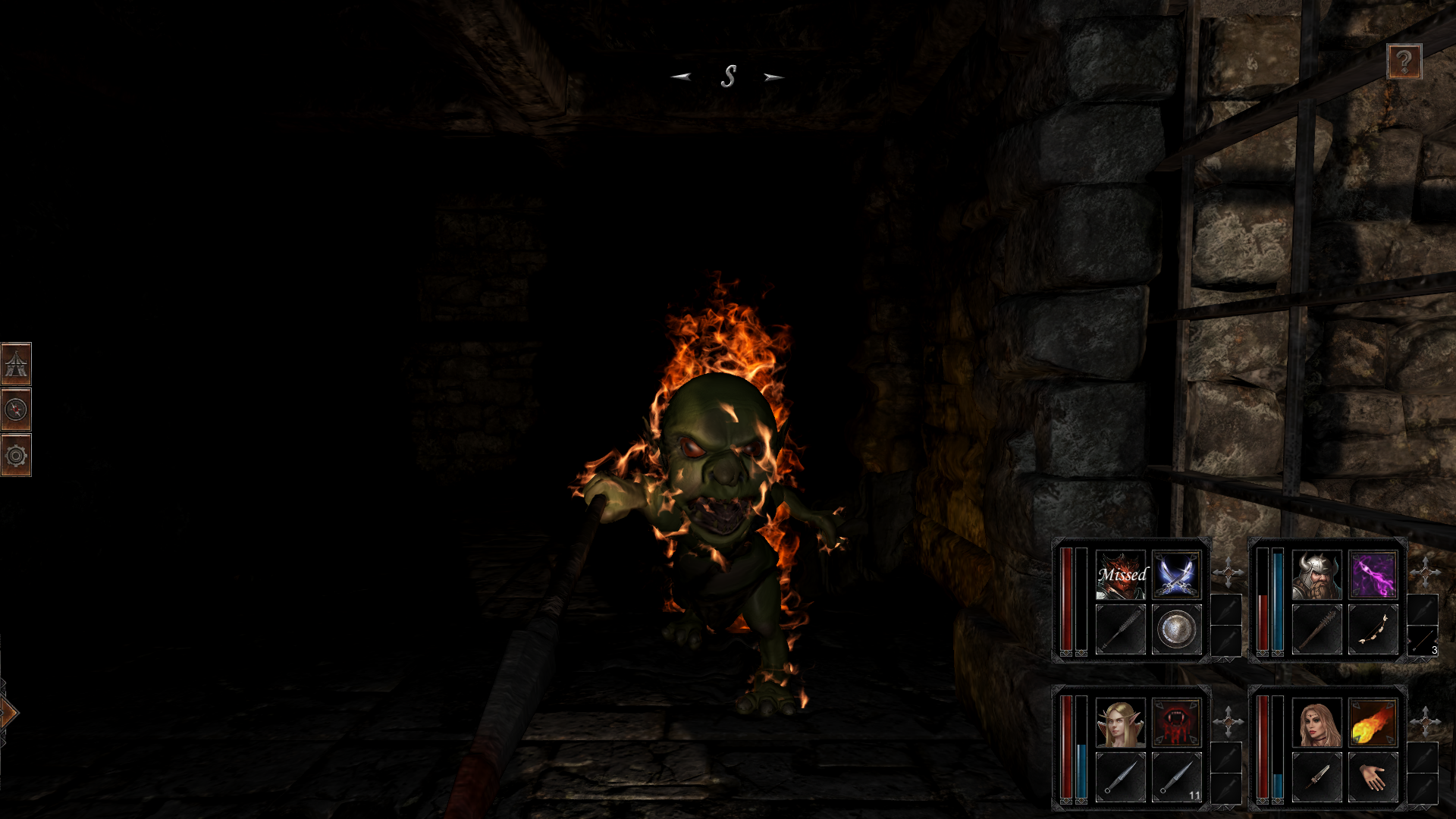 Some enemies remain on fire once fire magic is cast.

If playing on any difficulty above easy, characters are faced with hunger. This factor seems unnecessary to me, forcing the player to find food throughout the dungeon or buy from the tavern. Perhaps the developers meant for it to be an added challenge, but it feels more of an annoyance than anything. Once at the tavern, the woman who originally had enlisted you will heal any dead teammates and sell you food, weapons, and armor. Money is gained from defeated enemies or can be found throughout the dungeon, so be sure to search every dark corner. Armor and weapons can be found lying about the dungeon as well. There are plenty of secret rooms in each dungeon, their only revealing factor being a slightly darker tint in the brick on the walls. Attack them to reveal hidden treasures and items! 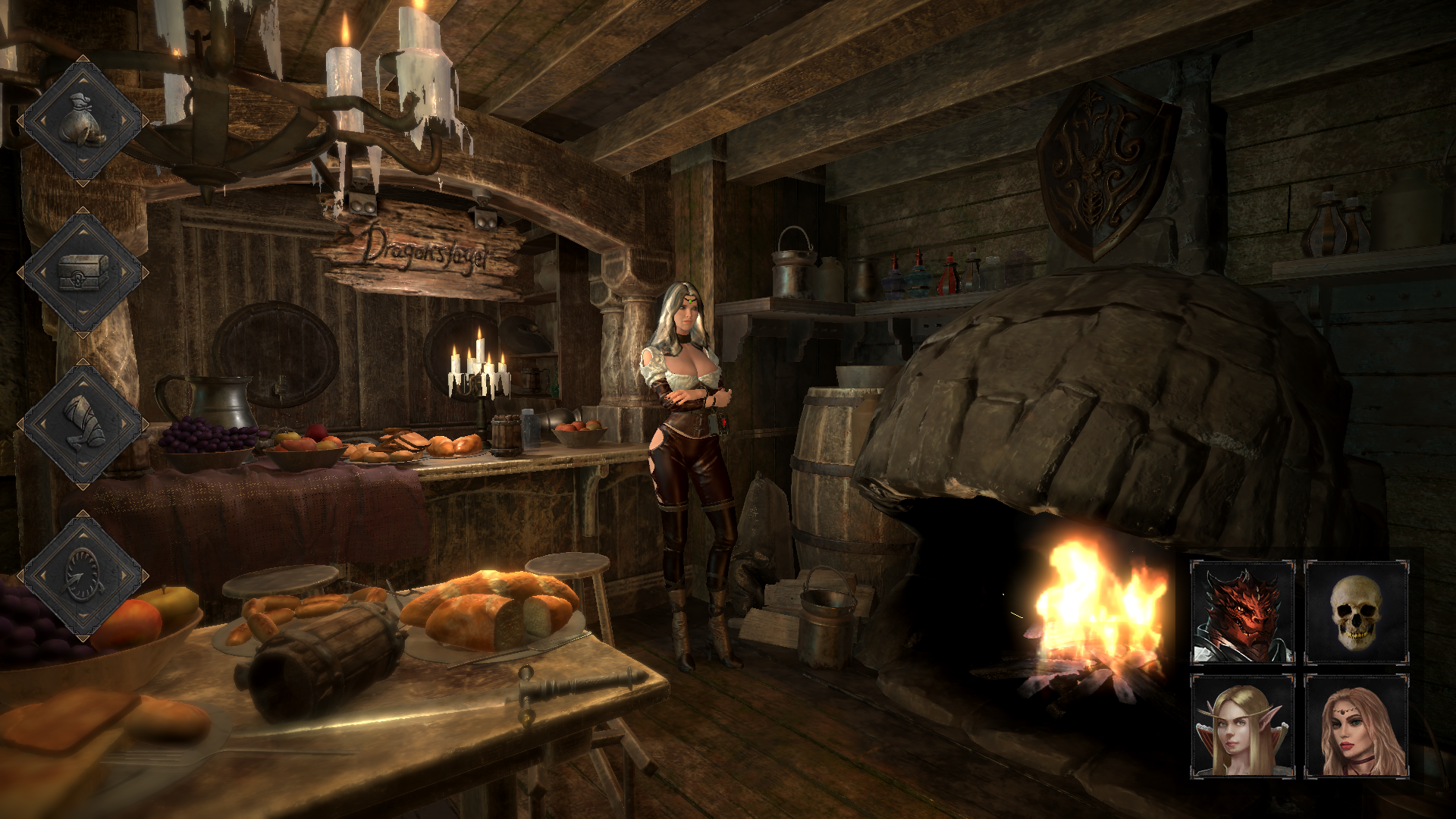 At the end of each battle, the characters (still alive) are given experience points. When they have earned enough points, the player can level up character stats. It reminds me a bit of how stats are raised in the Fallout games—how a point can be added to factors like strength, agility, and defense. Players can also choose which proficiency to raise, such as raising the effect of fire magic for the mage or the critical rating for the dragon warrior. Despite the simplicity, it seems rather lackluster. It would be far more entertaining if perks could be chosen for each character and level gained. I’d be more motivated and excited to level up my characters if I could choose a perk that will allow me to have a damage bonus on rats or even a ranged bonus from magic shots or arrows.

The dungeon graphics themselves are pleasant to the eye, lacking few bugs and haziness. The issue is that while the bricks and statues look great, that seems to be all there is. The most creative-looking objects are the keys and keyholes themselves. Everything is so bland and grey. I’ve seen later levels deeper in the dungeon, and the color pallet doesn’t seem to change much. There is indeed some creativity with the enemy design, but even then, there are still some recycled enemies used in various dungeons, making it seem like the same enemies over and over.

A view of some of the enemies in the game

As far as puzzles are concerned, they can pose a challenge, but some ended up confusing me because the solution would simply be too easy. In one instance, I pulled a lever to activate trapdoors to be able to walk across them, but at the same time, a statue would shoot a beam of light. If the light was allowed to touch the wall, the puzzle would reset. I had to quickly flip the lever and run to block the light with my body. It took me forever to solve this because it seemed too easy, but I eventually tried it and it worked. To be fair, this was not the only puzzle like this, but most puzzles presented a deeper challenge and were entertaining.

To crawl or not to crawl

Dungeon of Dragon Knight executes puzzles and exploration well, but tacks on an annoying hunger mechanic and a lackluster take on leveling up. It’s lack of creativity in the environments and enemies can be dreary and off-putting. That being said, DODK indeed cultivates the exhilaration of dungeon crawling, and I found myself enjoying the exploration and getting lost in its atmosphere and ambiance. I would recommend all RPG-lovers and dungeon crawler crawlers to try this game out, but to wait for it to go on sale. It’s worth the fun and challenge, but $15 is a little too steep.

Dungeon of Dragon Knight is a decent dungeon crawler, but I would recommend waiting for a sale before trying this one out.