Being Bad can Feel Good 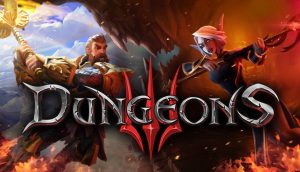 In recent years, I have reluctantly acknowledged the dearth of RTS games, or at least, the absence of classic franchises that made the genre famous. Fortunately, I have recently adopted simulations as my comfort genre, and they have served as suitable proxies as they demand efficiency, albeit a different kind than I am accustomed. Dungeons III combines the mechanics of RTS with the interface of simulations in an effort to create a blend of both. 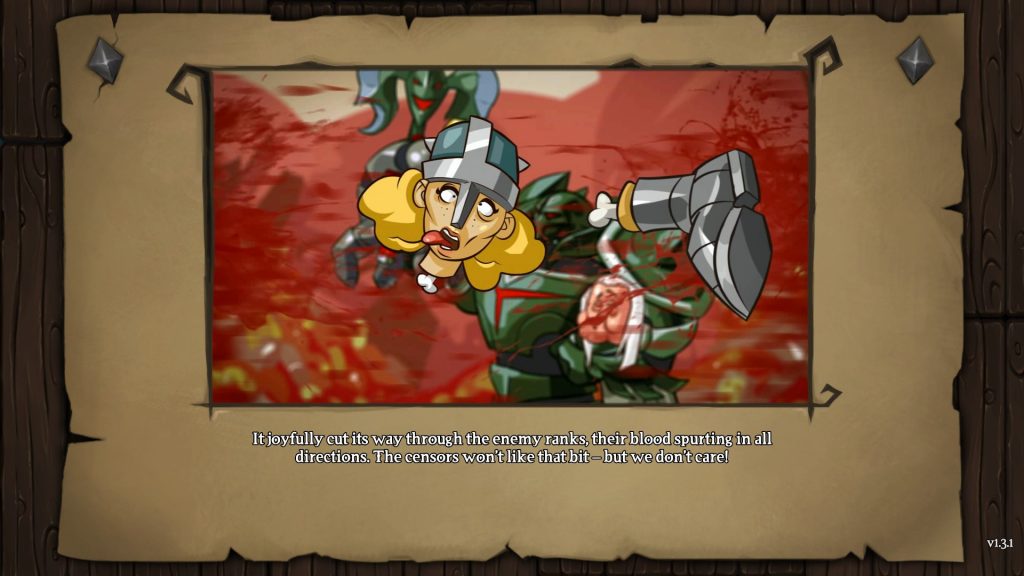 Violence: Units use medieval weapons in addition to spells like fireballs, lightning strikes, acid sprays. When units are struck by a weapon, they spray a red mist. After advancing far enough in the tech tree, units will not die, but become unconscious until their bodies can be recovered and collected in prisons or a revitalization chamber. 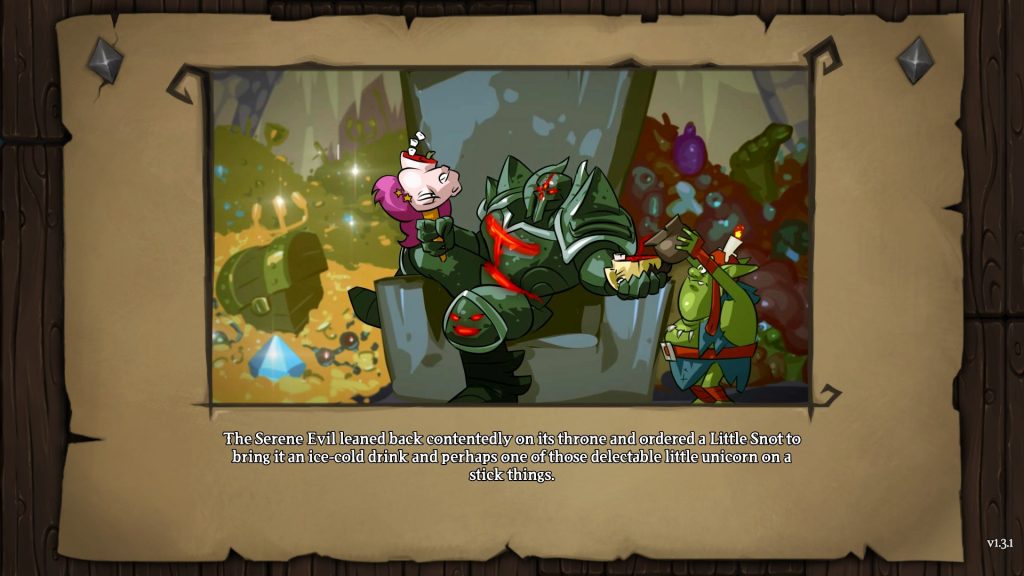 Unicorn on a stick? OH THE HUMANITY!!!

Cutscenes are rendered via cartoons, but they are violent in ways reminiscent of “The Itchy and Scratchy Show” from The Simpsons. Severed heads are a common feature. One character even fancies a kabob from a decapitated unicorn while drinking from the cranium of a fallen hero.

Language: A couple of characters, including the protagonist, use the British vulgar terms for the gluteus maximus and fecal matter. At first these terms appear infrequently, but toward the end of the campaign, the protagonist becomes increasingly boorish. 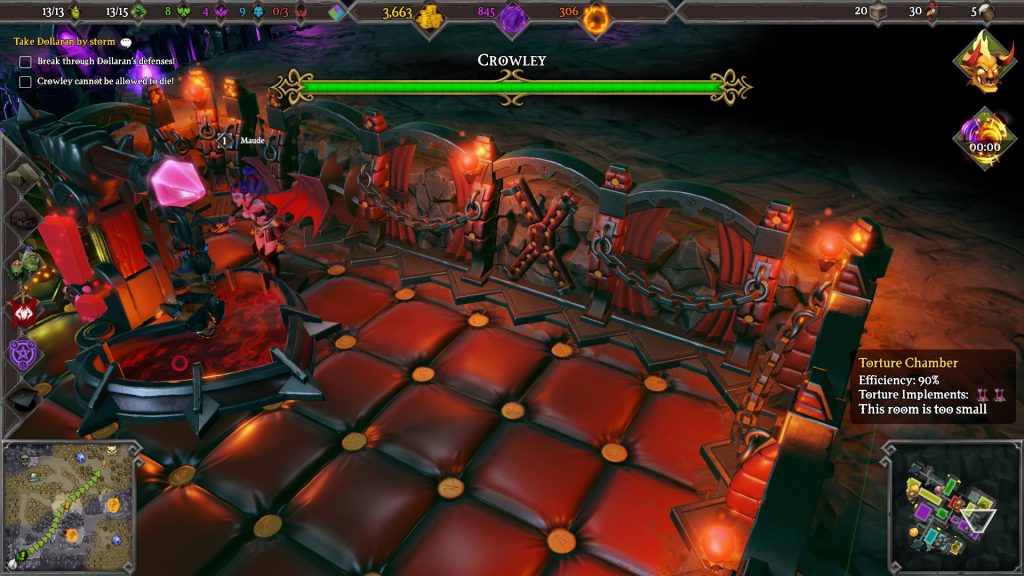 A succubus beats a victim that is hanging over a pit of…well, I do not know.

Sexuality: The protagonist is a hero unit who struts around the screen with deliberate sultriness. Her attire is likewise suggestive, as her dress resembles a loincloth made for women, and her hips and legs spill from both sides. 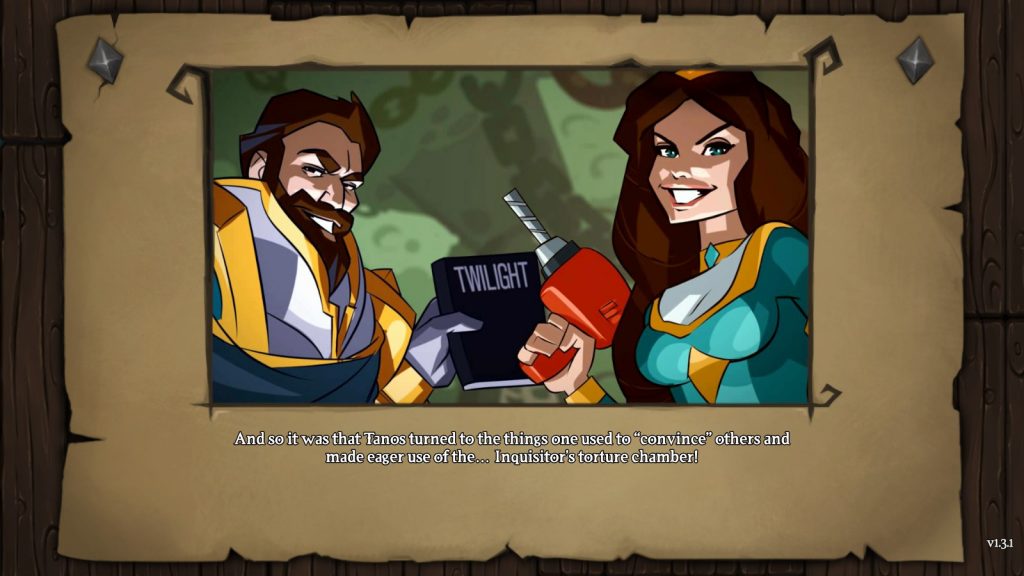 Ah, there is suggestive torture, too. Such as forcing a character to read Twilight!

Drug/Alcohol Use: In order to upgrade certain units, one must produce alcohol that the player’s armies will drink by the keg.

Spirituality: Dungeons III is a game where players are essentially the bad guy, known as the Absolute Evil (devil), who wants to take over the world because that is what evil entities like to do. Along the way, players will intentionally desecrate sacred lands, sacrifice humans (one merely drops bodies into a pit), summon demons, raise the undead, and engage in general roguishness.

The good guys, on the other hand, dedicate their mission to defeat evil to a generic goddess.

Positive Content: “Pride goes before destruction, and a haughty spirit before a fall.” Indeed, Dungeons III demonstrates how self-righteousness is self-destructive. 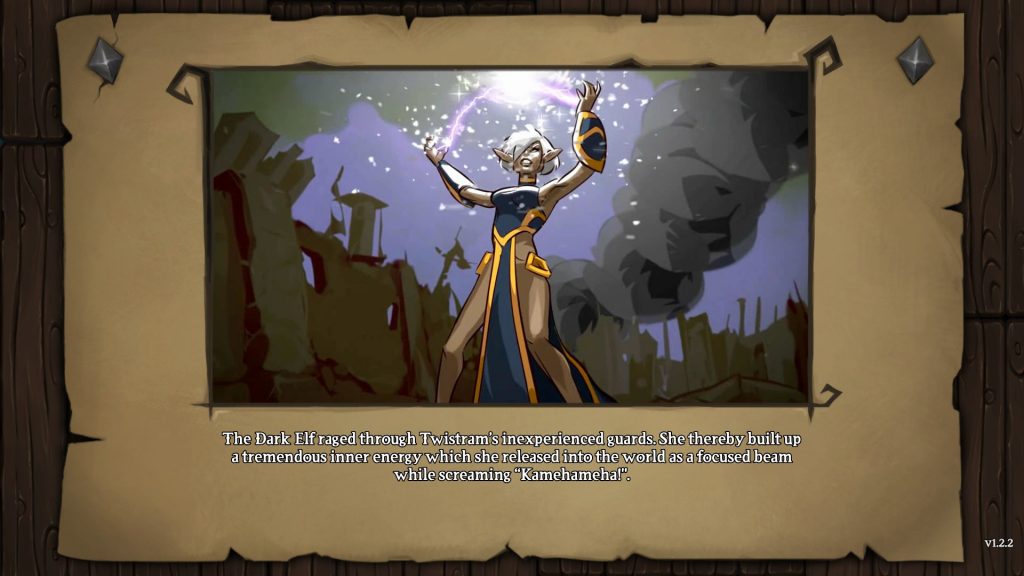 Care to guess her power level?

The gameplay in Dungeons III comprises of two distinct genres with two distinct styles. Since it is the first mode to which players are exposed, I shall address the game’s simulation aspects. Players begin at the literal dungeon’s heart, a centerpiece that must be protected to prevent a premature game over. W, A, S, D pans the camera while the mouse is used primarily to direct workers called Peons snots to expand by demolishing walls or laying tile for specific rooms. As the game progresses and more technology unlocks it will be necessary to develop by making preexisting rooms larger or building new ones altogether. RNG dictates the kind of underground surprises that lurk in the darkness, from gold caches to spider infestations that will need to be exterminated lest they come out to destroy the dungeon heart. 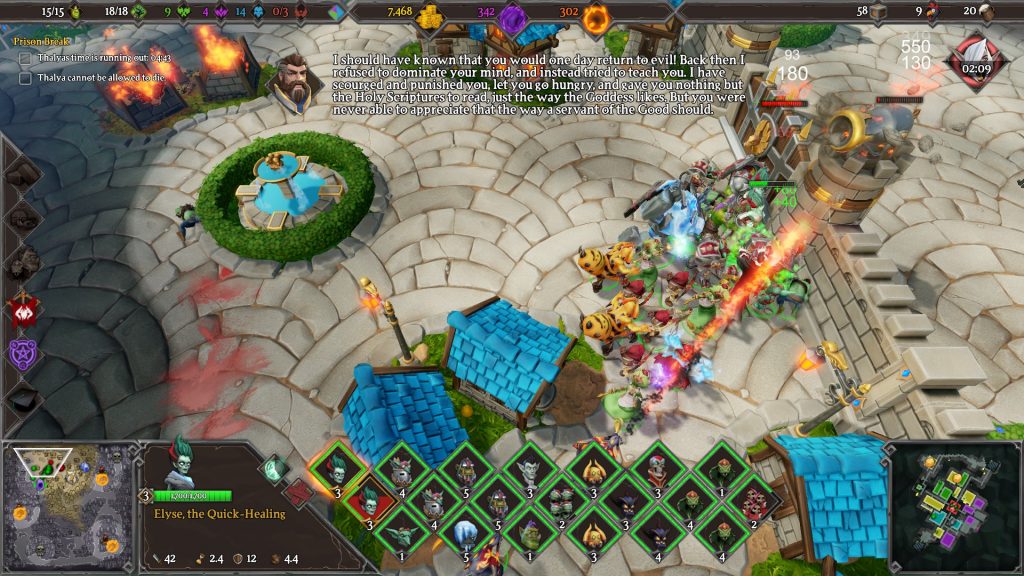 The game does not have kind words for religious legalism.

Much like a traditional simulation such as Prison Architect or Oxygen Not Included, one “paints” tiles on the floor to prompt workers to construct new rooms; of course the larger they are, the more efficient, yet expensive, they tend to be. Tier 1 units and technology only costs gold (and space) to produce, so as long as players are mining gold, they can purchase whatever is desired up to the unit limit, which, along with tier 2 units and beyond, require a resource found in the above-ground overworld in the form of “evil.” Its slow generation directly contributes to extending map playtime. Thankfully, there is at least no waiting is necessary to produce a basic offensive unit as they literally spontaneously drop from the sky.

This tech tree makes me feel like I must build all the things…except the area where horde units can be trained for bonus experience. Also, spells are unlocked through the demon tree to the upper right-hand corner. Make sure to purchase portal ASAP!

These units do require upkeep. All of them expect a certain quantity of gold per day. Low tier units must eat and sleep; units with enough experience require beer or mana baths to gain additional levels. Failure to provide these things will result in units going on strike, protesting with while holding signs expressing their discontent while near the dungeon heart. Providing for all of these needs naturally becomes more difficult with higher level, higher tier units. Also, (enemy) heroes periodically pour into the dungeon, becoming nuisances who slow down production. Dungeon keepers can either build traps to thwart their raids, tunnel long paths in the dungeon to delay their arrival, and/or simply grab all offensive units at once and “dump” them on top of the enemy for a generally easy solution. However players decide to manage these elements, the simulation portion of Dungeons III is its own fun metagame. 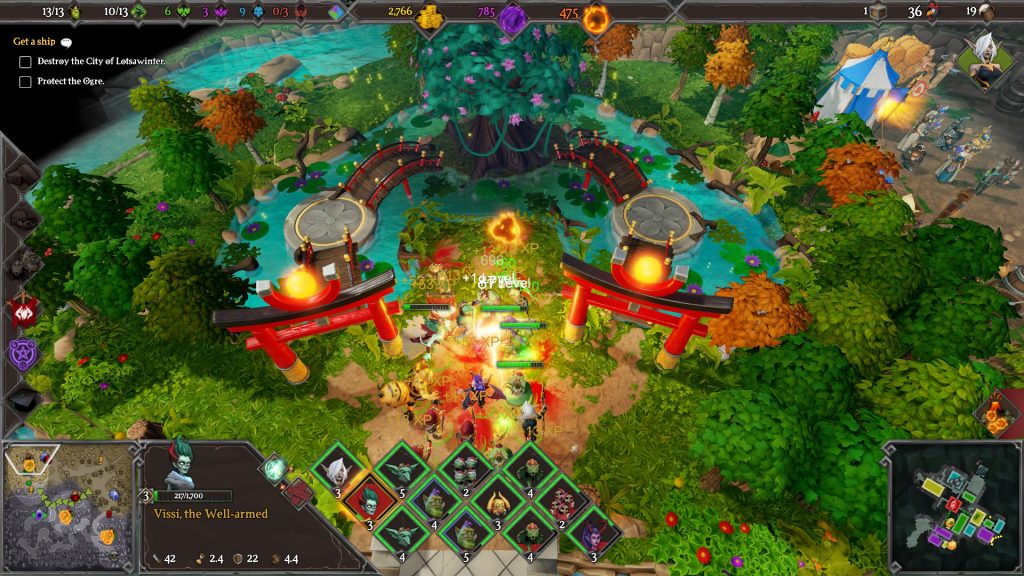 The units and locations look great.

The RTS portion of the game, beginning when players emerge from the dungeon into the overworld, is the weaker part of the game, as I was able to faceroll almost every map. Realmforge Studios might have already been aware of this given the huge “Hellish” difficulty toggle proudly occupying space on the bottom of the mission select screen. I choose not to enable this because missions already drag on long enough, averaging roughly an hour long each on the first try.This is because while each mission requires players to take advantage of new tech simulation-side, most missions do not begin with the prerequisites already constructed. Repeatedly waiting for the accumulation of enough evil just to build the necessary tools to finish missions on an individual basis is taxing. 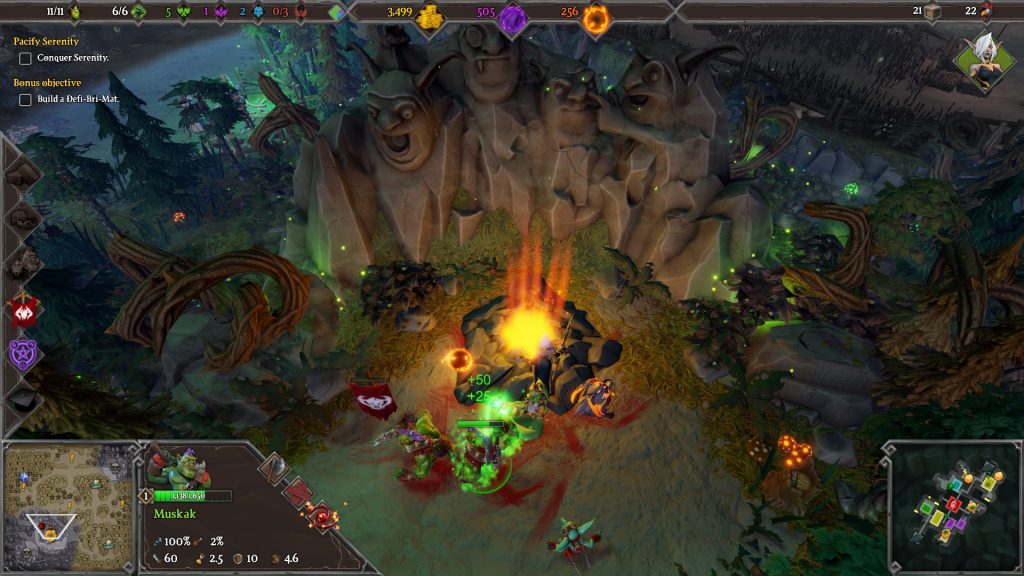 Luckily, the units themselves are alluring; every one of them boasts a special ability. The basic grunt has a rage ability that increases attack speed at the cost of making them more vulnerable to attack—a risky trade given this unit is the early tank. The basic goblin can “backstab” by attacking without fear of retaliation as long as there is another allied unit present. At tier 2, Medusas are ranged units, but they will be used primarily for healing. One can also unlock demons—imps are units with the longest range, while giant tarantulas have medium range, but do more damage. Succubi can charm enemy units to have them do the Absolute Evil’s bidding. Lastly, the undead tree requires the cadavers of fallen heroes to be buried in a graveyard before they rise as zombies. Skeleton archers spawn from the expired bodies of imprisoned heroes. All other units can be purchased: the banshee has her AOE scream that stuns enemy units; the lich shoots cold blasts; the vampire regenerates with a lifesteal attack. There are also three top-tier units for the horde, undead, and demonic trees consisting of the ogre, golem, and balrog. Because I enjoy balanced armies, I would build a little of everything. 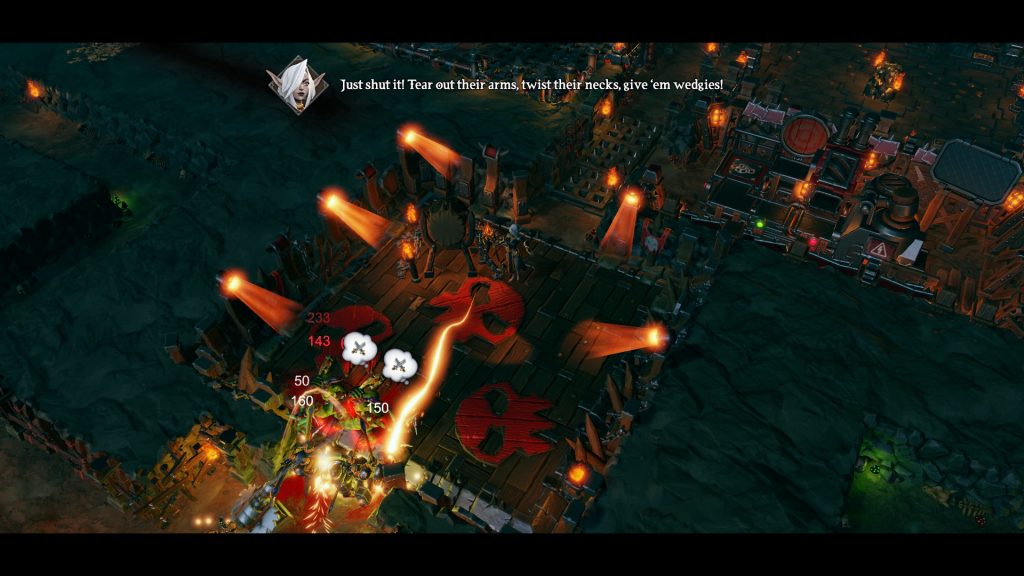 Thalya’s trash talk as she barks orders is the most hilarious part of the game. She always gives ultra-violent suggestions followed by “Make them listen to elevator music,” or “make them build a puzzle that has missing pieces!” I always look forward to that last punchline, lol.

Contributing to the easy difficulty, it is possible to never lose units. Of course, the undead are already dead, so when they lose health, they return to their graves to “rest.” Demons return to a state of summoning, consuming mana until their health is replenished. Even horde units can be resurrected—ironically by undead units—at a certain technological tier. 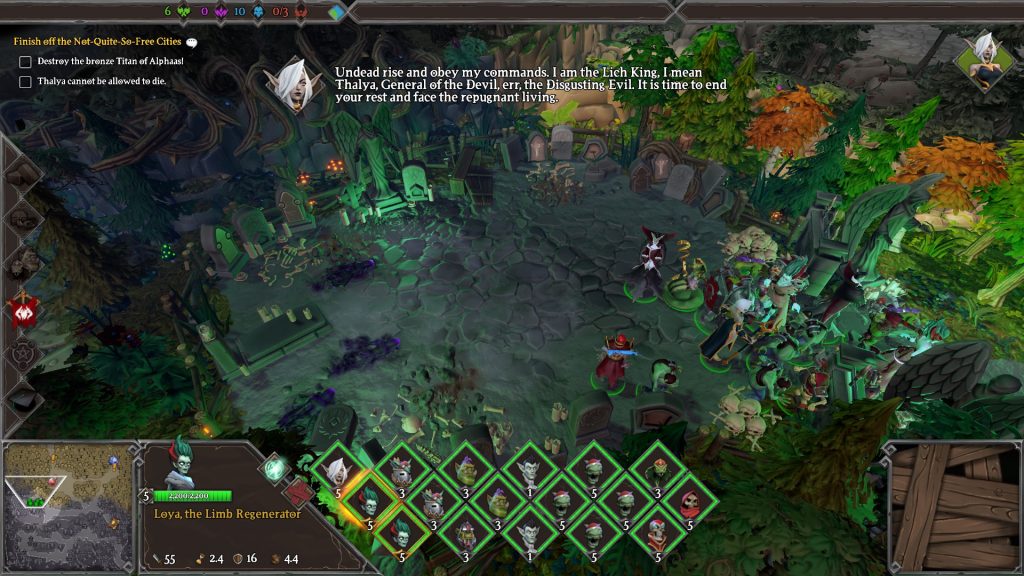 As far as enemies on the good side are concerned, units are much more generic, appearing as basic D&D classes. They consist of dwarven fighters (tank), paladins, elven archers, rogues, mages, gunners, and priests. Much like the levels that player units can gain, differentiating between how strong one level of an archer is from another is unclear. Nevertheless, these heroes do scale in terms of the kind of damage that they can inflict. 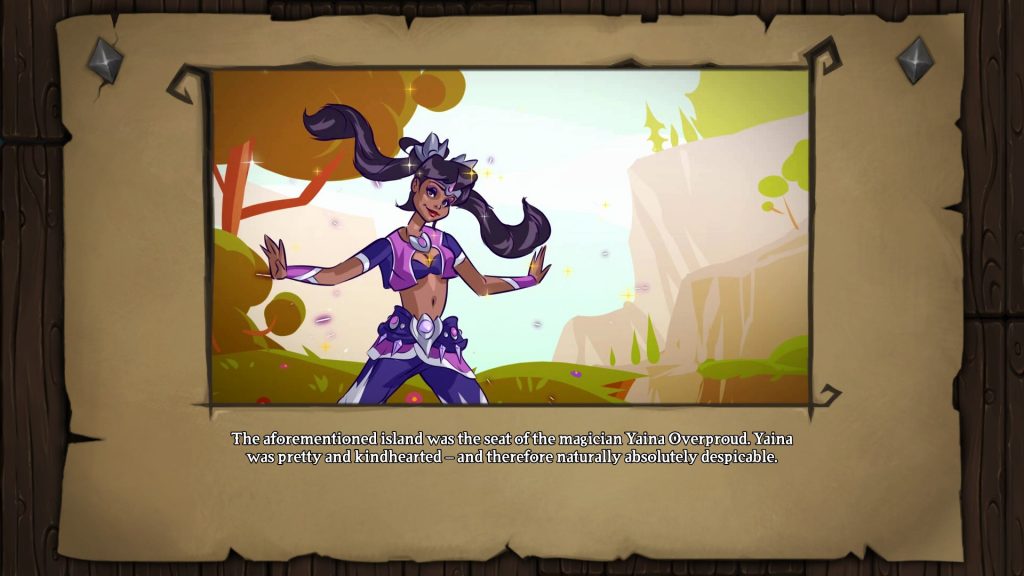 Readers might find some of these unit names familiar. That is because Dungeons III fashions itself as a spoof of WarCraft III, and it accomplishes this with great success. At first, I was annoyed by the extended narrations that had made this franchise famous, but its insistence on breaking the 4th wall as Thalya banters with both the narrator as well as her “inner good side” in addition to shameless reenactment of the WCIII human campaign put a smile on this stoic reviewer’s face. In Blizzard’s rendition of the tale, the Crown Prince Arthas, in is quest to defeat evil, becomes evil himself, destroying that which he had intended to save. In Dungeons III, the foster father of the Dark Elf Thalya, Thanos, tries to convert his adopted daughter from evil to good, but the Absolute Evil intervenes by means of enchantment. Her inner-goodness pleas internally with Thalya as she acts as Evil’s agent. With Thalya barreling through his friends and allies, Thanos is forgiving at first, but eventually responds in a way that does more harm than good. 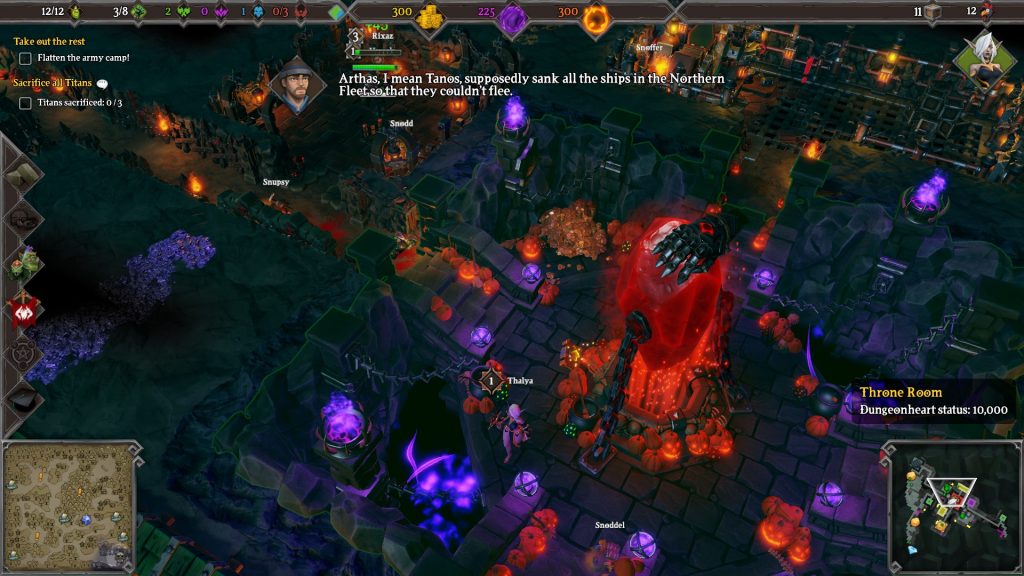 It is not often that a game catches me by surprise, but Dungeons III has won me over. I found myself excavating the outer edges of dungeons, creating wicked paths for foolish heroes to venture, while looking forward to conquering and corrupting the next tranquil site into something more fitting of my vocation. Its fusion of the most entertaining aspects of two distinguished genres is an accomplishment that I am pleased to have experienced. 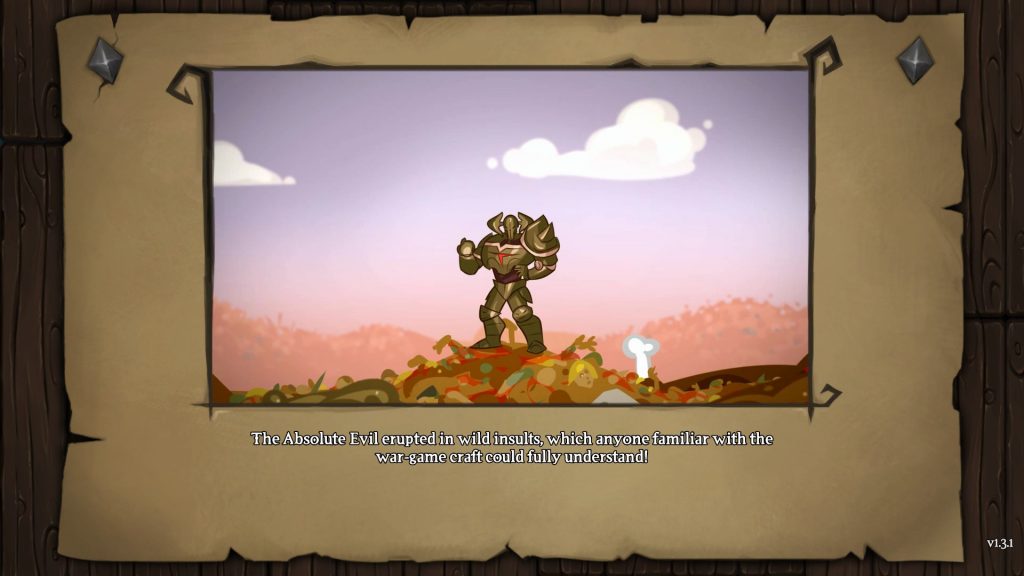 Dungeons III is a charming hommage to WarCraft III that eschews the stress of RTS micro and macromanagement with a smooth simulation interface and leisurely combat.