While I stood in line two weeks before Christmas in the Michigan cold outside Toys “R” Us  for a Nintendo Wii in 2006, I waited to get a PS3 because that sucker launched for $700 at lunch. While I chuckle to myself at how 2000s prices are a bargain compared to buying a system in 2021, let alone a video card, PS3 was the generation when disk-based games began selling for $60 MSRP. Some might call it the HD tax, as games began to display at a crisp 1080p for the first time; to this day, I call $60 for a brand new game robbery, and prided myself on being a late adapter. 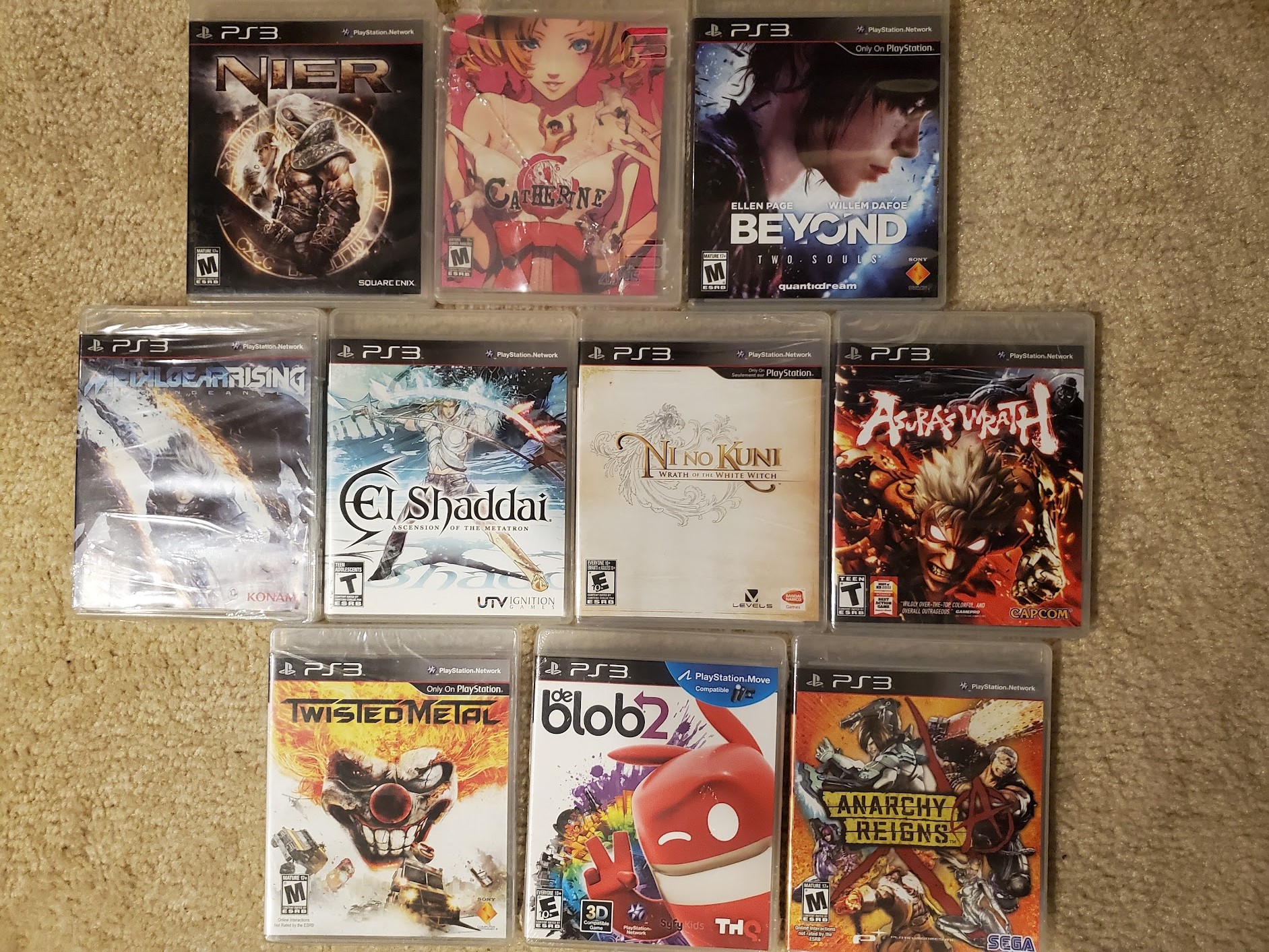 Most of these games, like El Shaddai, have been ported by now.

Behold, my PS3 backlog. These are games that were considered unique experiences on the PS3 during its heyday…that I never actually played. Some of these games are still in the shrink wrap! Among them is the topic of this review, El Shaddai: Ascension of the Metatron. Thus, when crim Co. decided to port the game to PC, fans or slackers like myself would rejoice, for a niche game gets a 4K upgrade. 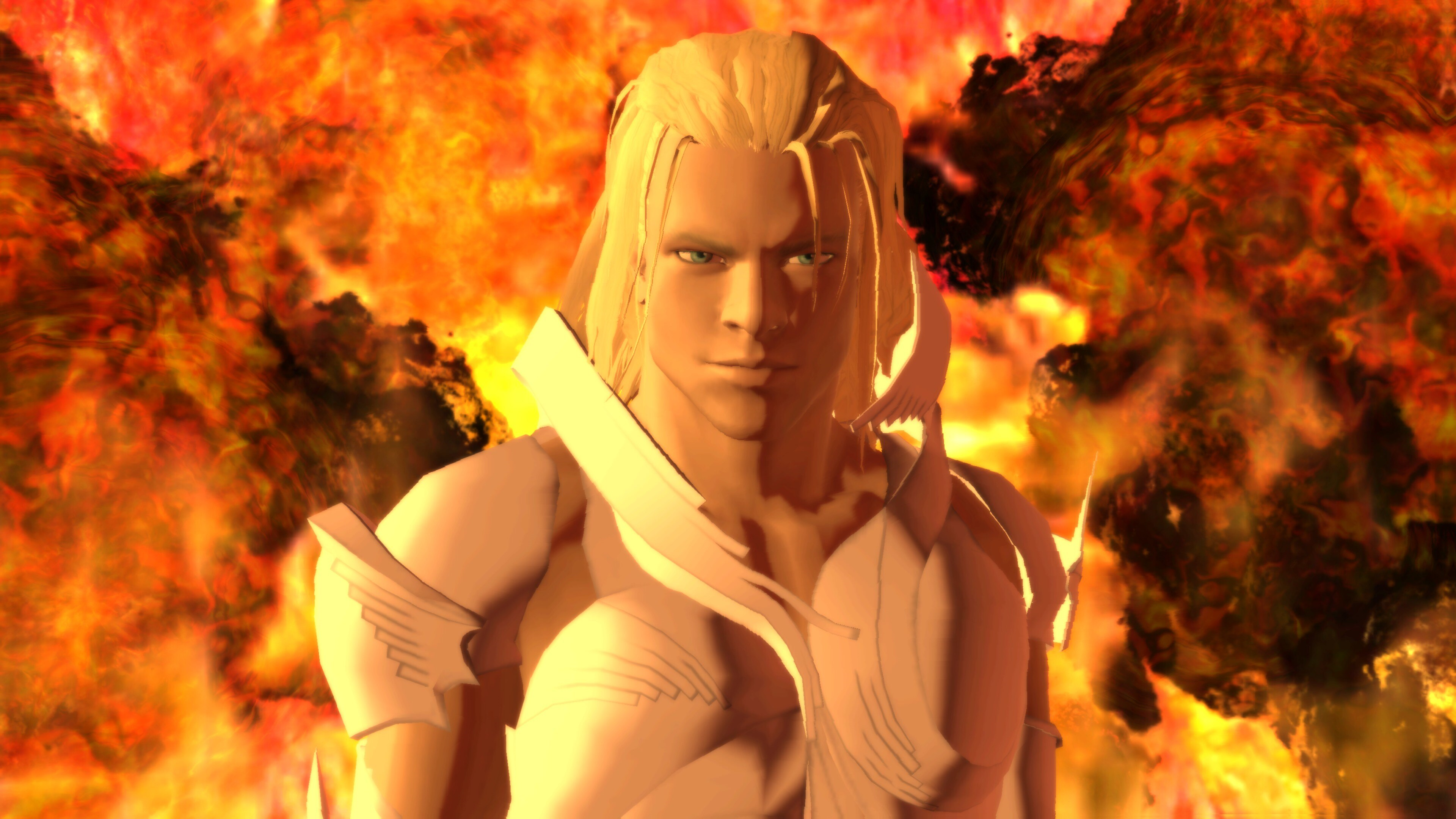 Violence: Instead of blood, red lines indicate when a blow lands.

Spirituality: El Shaddai means…well, a lot of things depending upon the translation. Hermeneutics is funny like that. I like the sound of “God Almighty” best, though.

This game is inspired by the book of Enoch. Besides the main character’s name, I know next to nothing about the text—apocryphal to Christians, canonical to Ethiopian Jews, one can follow the trail of hotlinks to find out more. Other names, like Azazel, Ishtar, and Belilal might be familiar names in religious lore; do not expect them to adhere to preconcieved notions, though. El Shaddai turns things on their head. 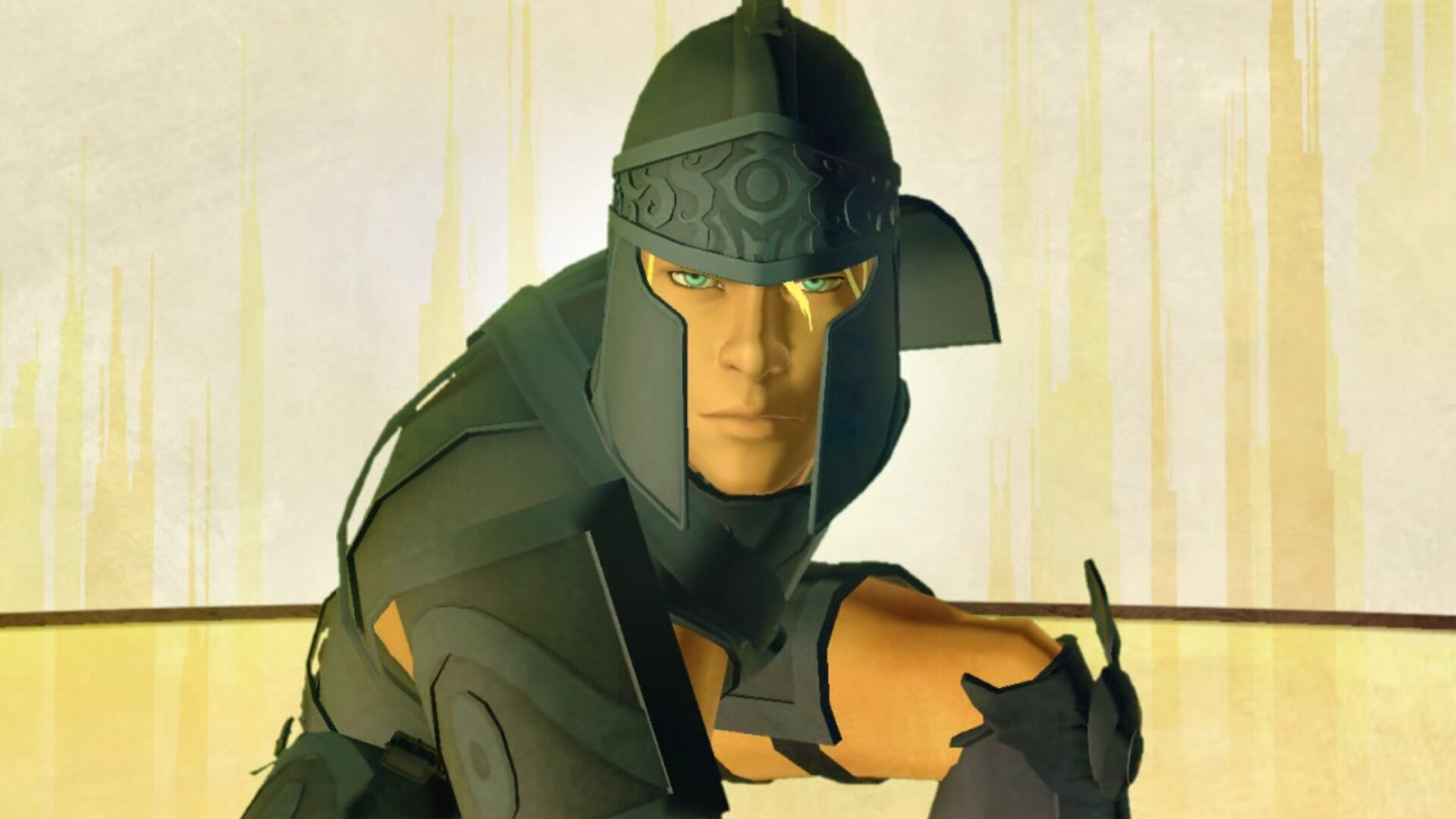 Thousands or millions of years ago, depending on if the player supports Young Earth creationism or Old Earth evolution, God created humankind and appointed the Grigori, the most human-like of all angels in heaven, to monitor his creation. The Grigori were compelled to obey for eons. Over time, the lives of humans intrigued them, as free will allowed humanity to pursue passions of their own conceptions. One day, the Grigori abandoned their posts and descended to Earth in order to experience life as humans have. They became known as Fallen Angels. 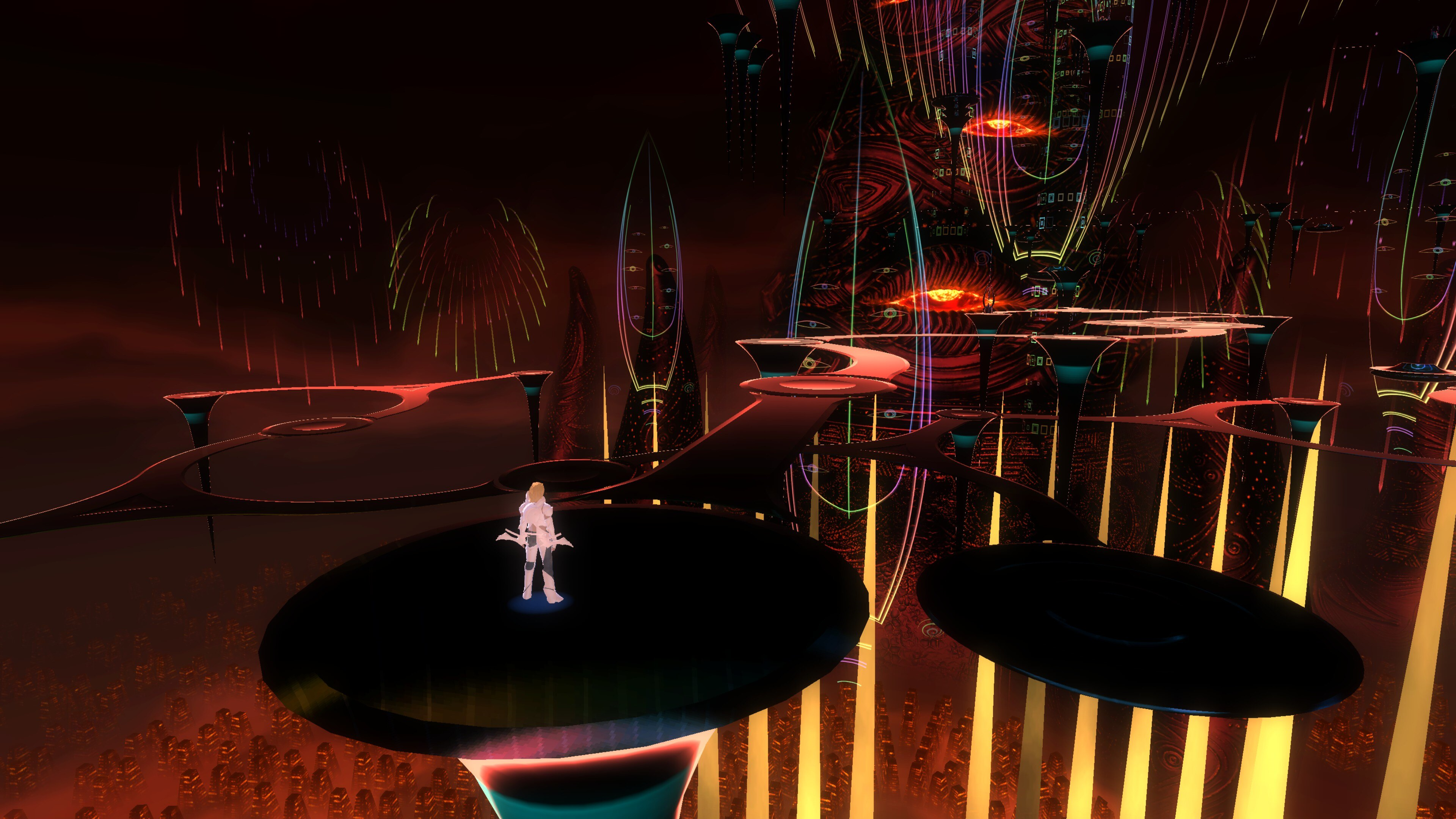 I was not expecting this to be Fallen Angel HQ. 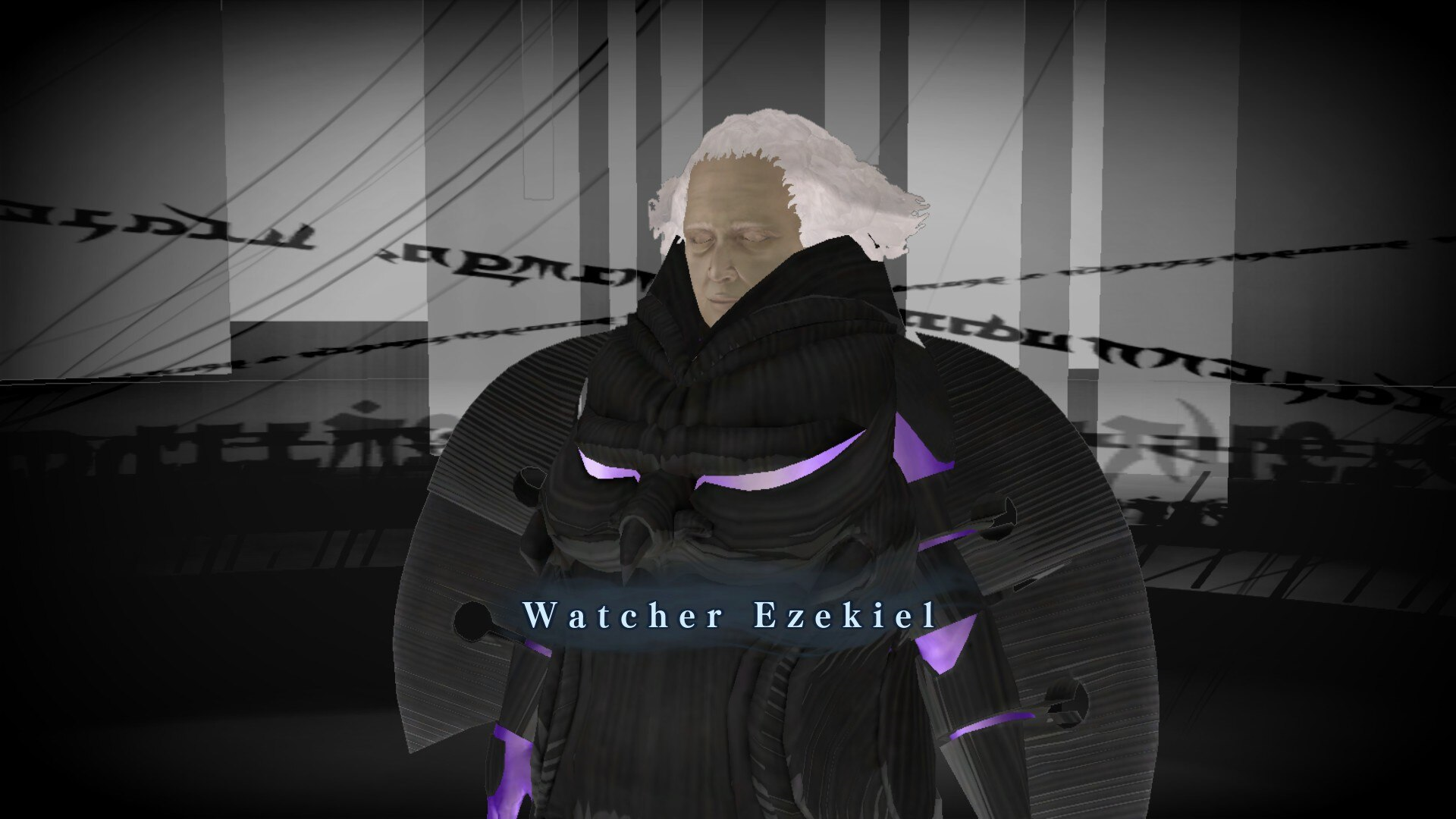 I was not expecting an old professor as a Fallen Angel. Also, eek those textures!

Enoch returns to Earth, and gives chase to the Fallen Angels for an undefined quantity of time. That lack of certainty is fundamental to my list of greviances with El Shaddai: Ascension of the Metatron. The game likewise plays footloose and fancy-free with its aesthetics and plot. Its resistance to establishing an easily-followed timeline certainly does not help in the deciphering of its cryptic story. 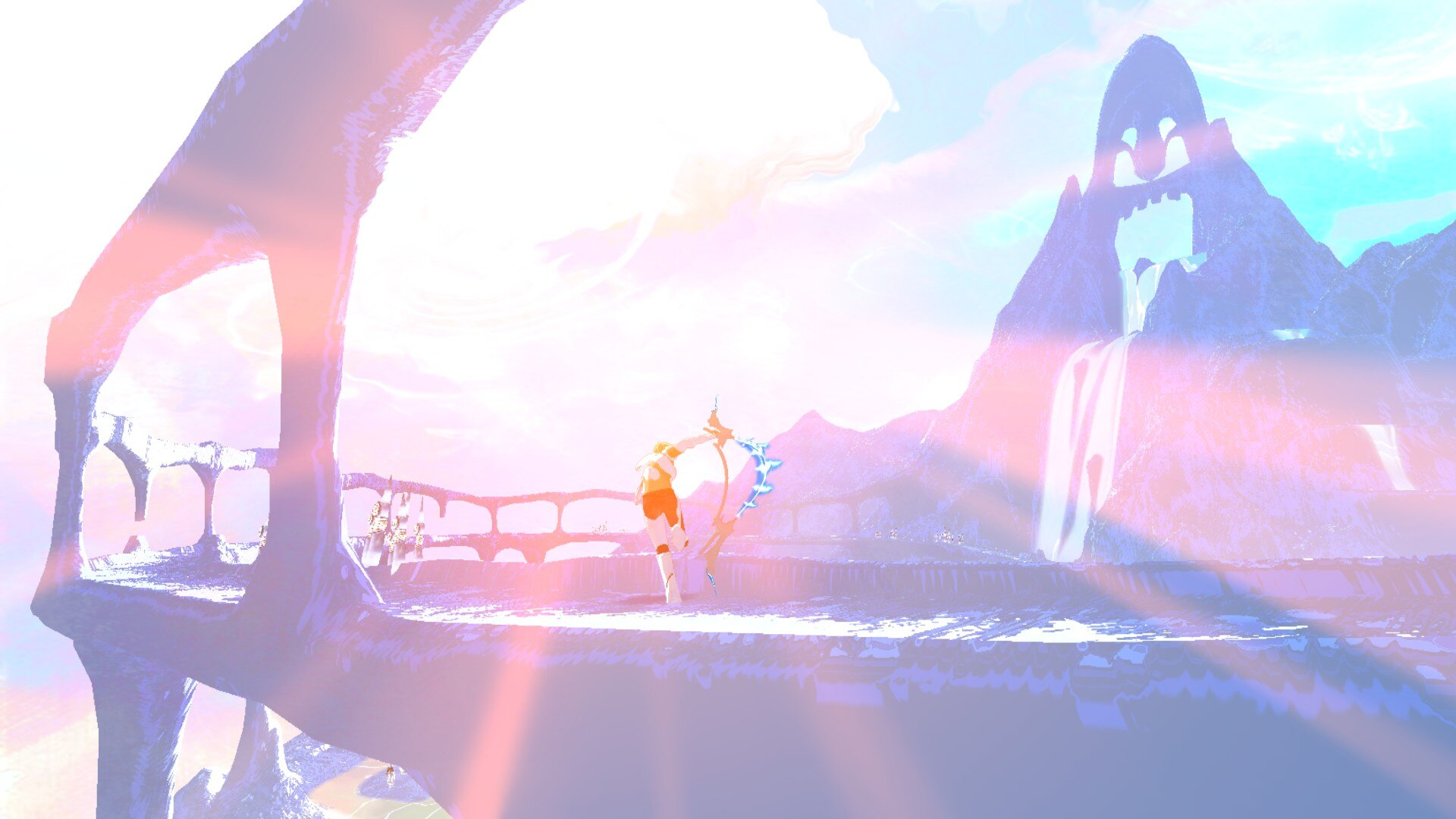 But first, allow me to give the game partial credit for its art direction–yes, partial credit. El Shaddai once received acclaim for its vibrant palette, dynamic backgrounds, and luminous stages. I can understand how it might have been appealing in 2011, yet Okami was a 2006 game that also made waves with its aesthetic choices. In 2021, we have games like Abzû, Gris, Spiritfarer, two Ori games, anything Supergiant makes, and many more. El Shaddai has to bring more to the table than fancy eye candy. 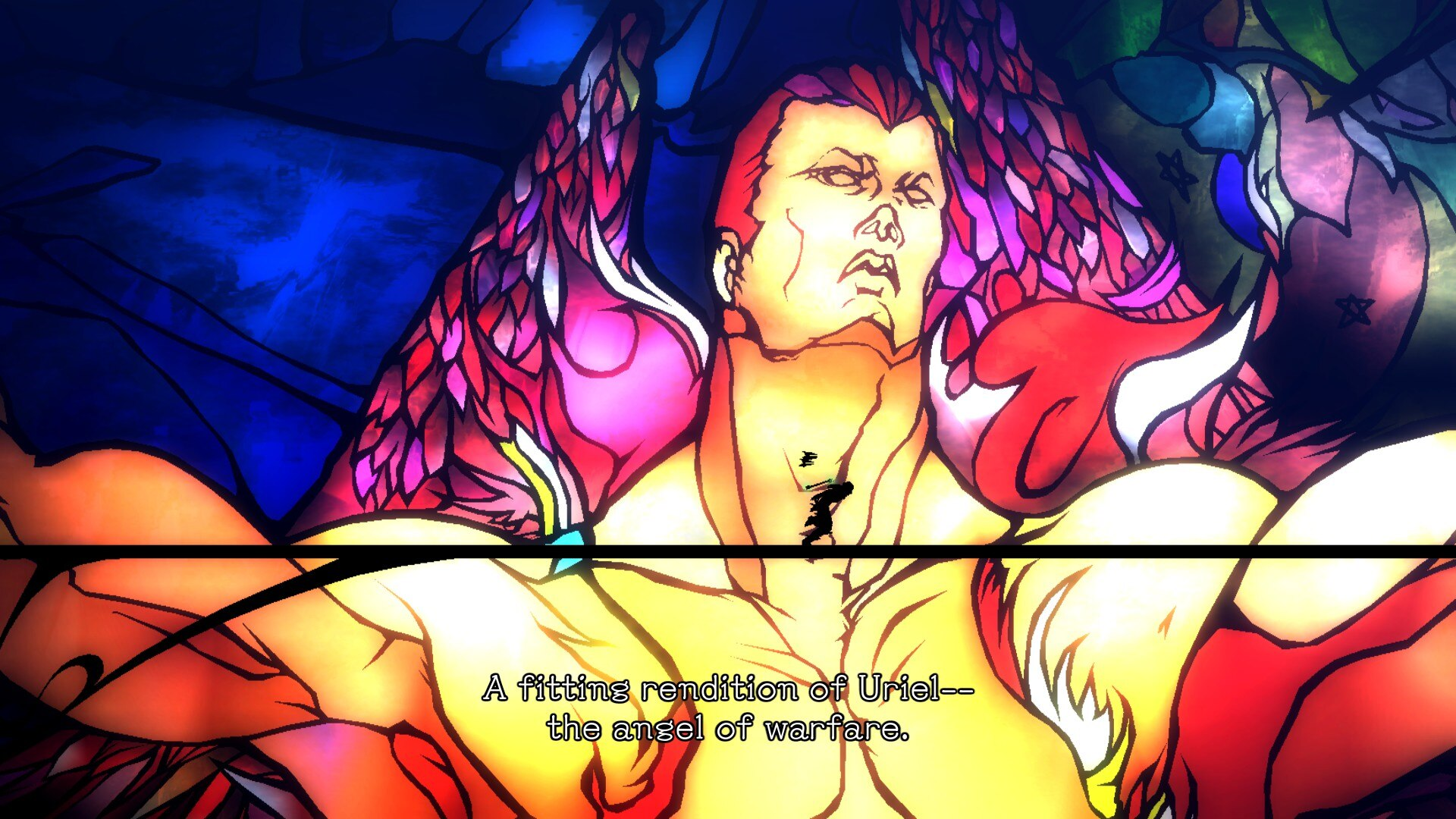 El Shaddai unflatteringly betrays its age by including these side-scrolling loading screens. The cryptic narrative does not make enduring them any easier.

Sadly, cool graphics and effects are El Shaddai’s high points. Its gameplay does not entice enough to warrant making the progress necessary to witness the game’s visual offerings. While the game was originally released in 2011, its gameplay feels like it is from 2001. There are three heavenly weapons: the bow-like arch that Enoch brands on the key art, the ranged gale, and the armored veil. Each has to be commandeered from a stunned foe, where the process for this is at first easy, but later becomes button-mashy with every enemy encounter. Only the gale offers a fancy combo, yet it is merely fancy in comparison to the boring basic combos that these weapons offer. El Shaddai was designed to be less like Bayonetta and more like Ico, and nobody remembers Ico for its combat. The bland enemy design indicates that combat was an afterthought to the developers at crim Co. 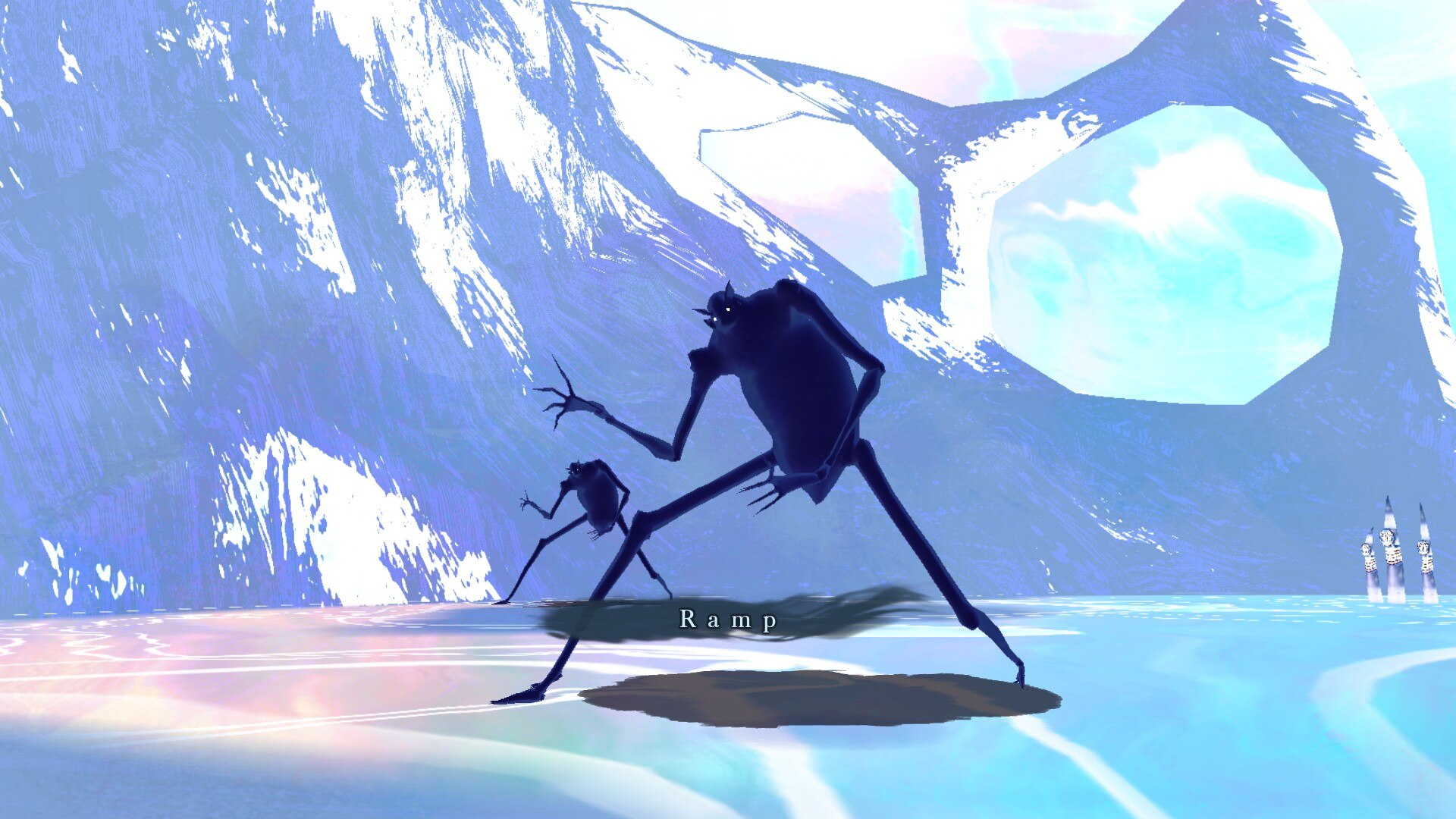 Really, if Ignition Tokyo wanted players to experience aesthetic spendor, why trap players within unskippable battle arenas with so many uninspired enemy designs?

Whether I defeated or lost to a Fallen Angel, El Shaddai would proceed as if nothing of import took place. The game continues without indicating to the player the consequences of losing or winning a Fallen Angel fight. Lucifel, an archangel and Enoch’s handler, appears on Enoch’s path through stages, talking on the phone with someone—probably God—about Enoch’s progress. Lucifel is supposed to serve as both a hard save point and also a source of commentary for the game’s ongoing events, but his lines lack substance. After encountering an enemy for the first time, for example, Lucifel will say something like “Yes…he made it through just fine.” Yes, but please tell me something that I do not know. 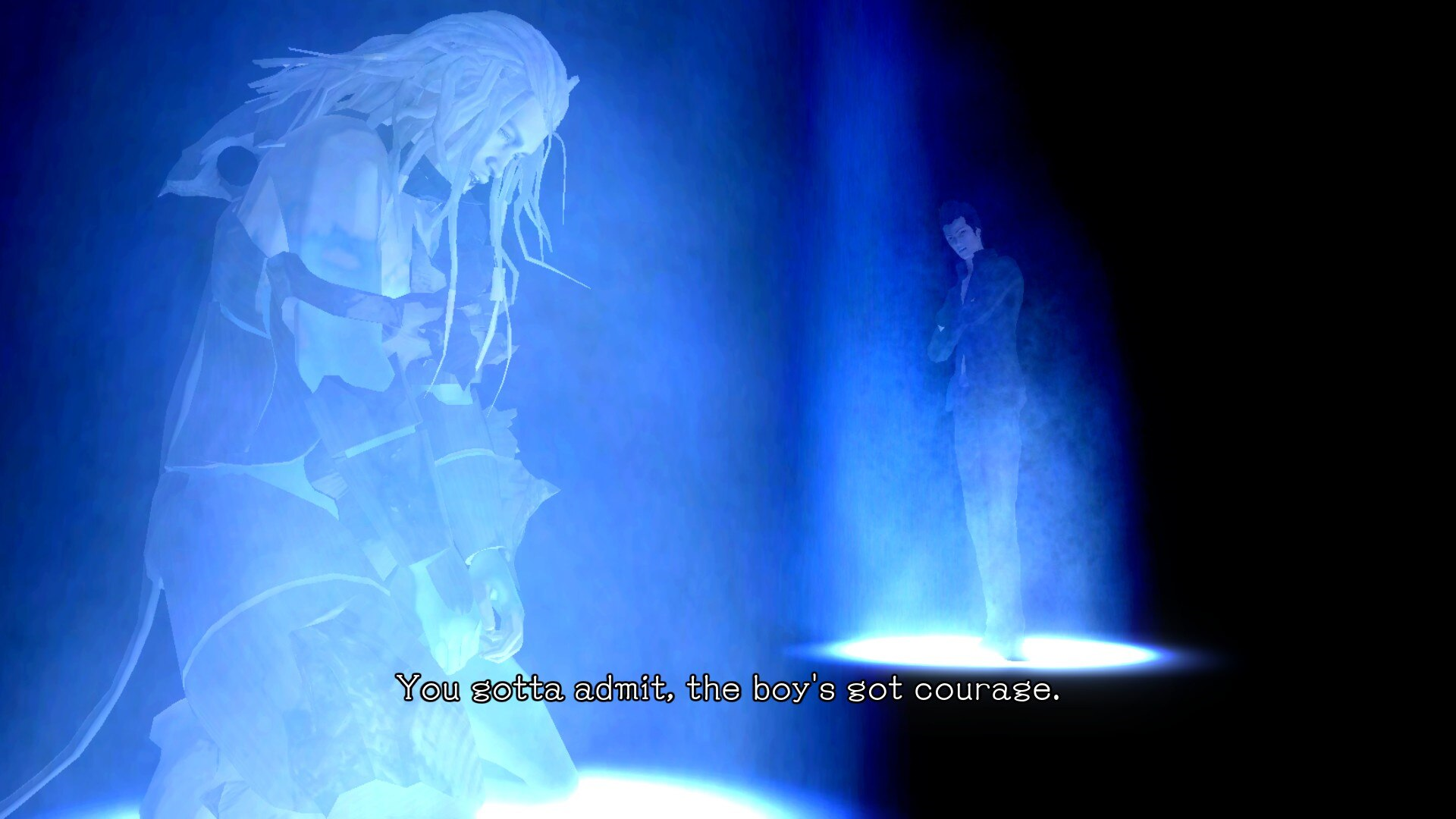 Thanks for absolutely nothing, Lucifel

At the time of its original release, El Shaddai was a niche title. Greenlighting a modern port of a little-known game perplexes me. On one hand, as an archivist, I appreciate developers and publishers dedicated to preserving their work for all time, rather than losing the source code and everyone having to rely on emulation to experience it. On the other hand, El Shaddai 2021 is a barebones port among games like Shadow of the Colossus, which has been remastered and remade (let alone higher-budget titles like Resident Evil 2, Resident Evil 3 and Demon’s Souls). El Shaddai does offer sixty frames per second and 4K resolution options, but why? I would not believe that the same PS3 that brought forth Ni No Kuni (to select an approximately similarly budgeted game) would feature a game with as many jaggies as El Shaddai does, but one can see them in all of their glory at 3840×2160. I recommend this game for fans only, which I am afraid are quite few. 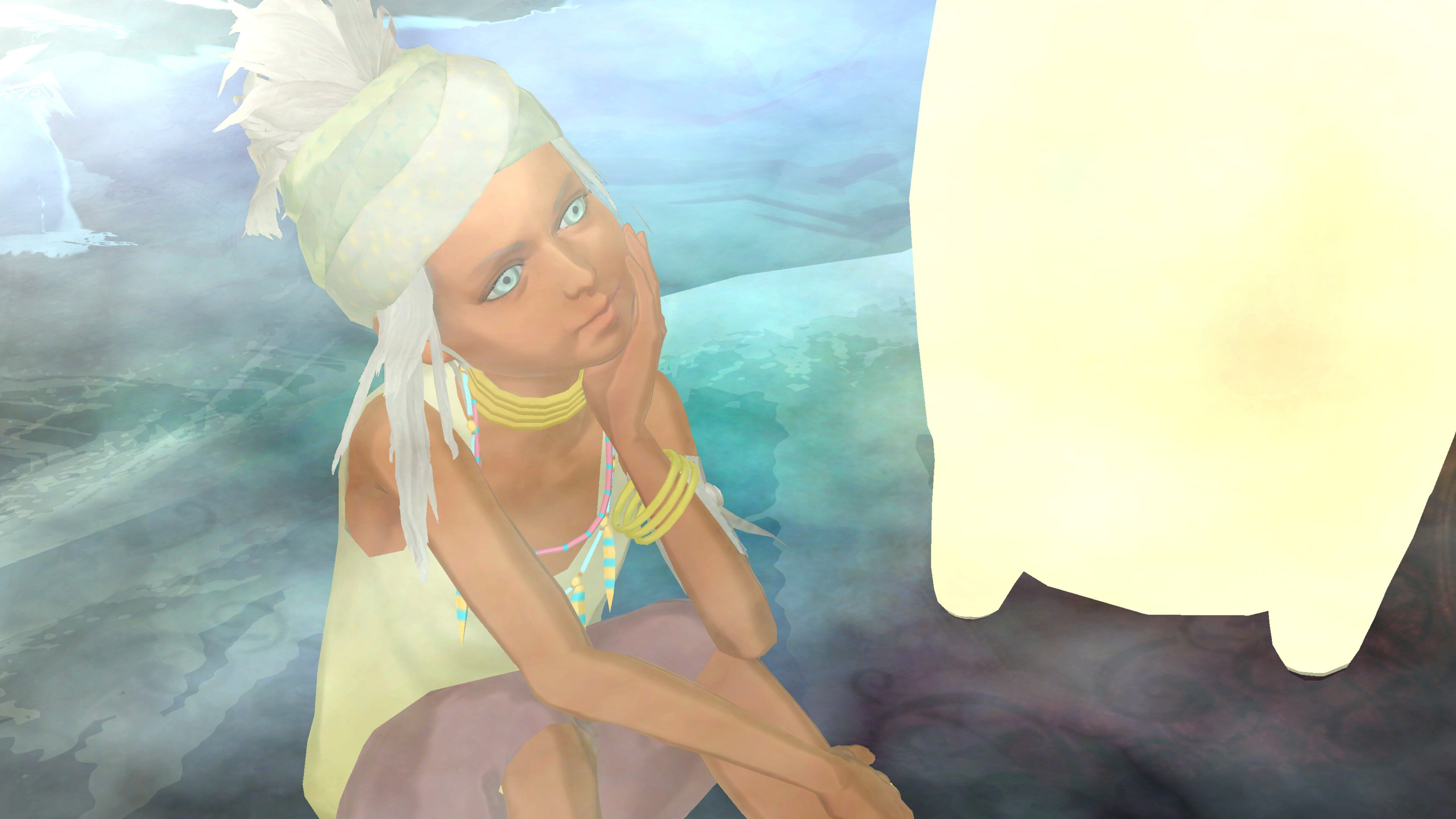 I, too, am underwhelmed, Nani.

I looked forward to giving an game like El Shaddai a try, but its aged...everything...fails to hold my attention.