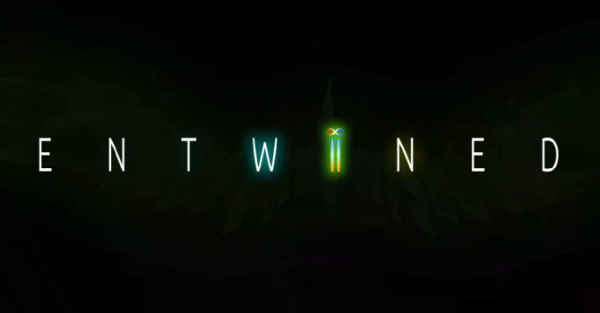 Content Warning
There is absolutely nothing to concern yourself about. Entwined is safe and fun for the whole family! 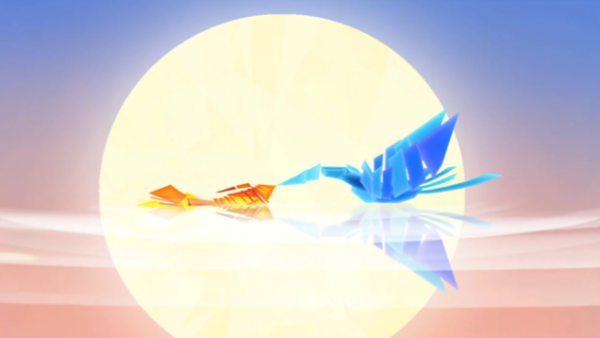 Opening
I have to say, when I saw Entwined on Sony’s E3 conference, I felt intrigued but, ultimately, a bit underwhelmed. It wasn’t until I did some research after the conference that I really got a good look at what it was and what it promised to deliver. I’m very happy with my decision to give this indie game a chance, and I believe you will be too. 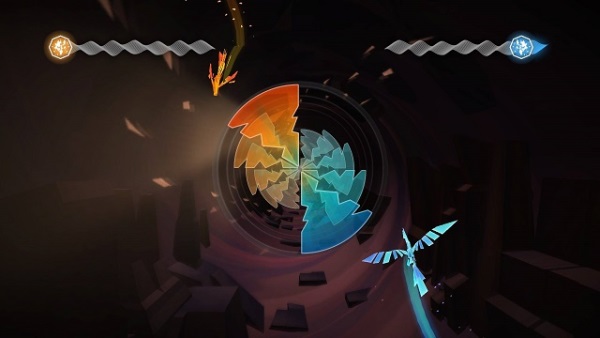 Story
Entwined doesn’t tell a story in the traditional sense. Instead, it uses beautiful scenery, music, and gameplay elements to weave a tapestry we can interpret on a much deeper level than face value.

Our story involves two protagonists, a fish and a bird. Each knows they were meant for one another but by their very nature they must forever remain separated. That doesn’t stop them from taking an incredible journey together, leaving us with a stunning romantic tale of forbidden love. 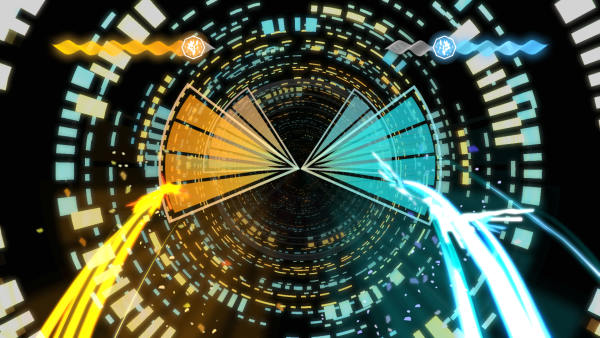 As you progress through each stage, you’ll speed through a tunnel, matching the location of our heroes with gates that correspond to their colors. These gates often correspond to the music, often chaining a quick series of five or six gates together. Along the way, you’ll collect various orbs that power up each character. When both are fully powered, they can combine their powers to transform into a dragon, free to roam and paint the skies around them.

The premise sounds simple at its face, but after the first few levels you’ll quickly realize you’re in for quite a challenge. I dare say Entwined requires more concentration and hand-eye coordination than any game I’ve played in years. Making a flawless run or beating a high score will require more out of you than many games on the market, though you can still enjoy the game without mastering it. 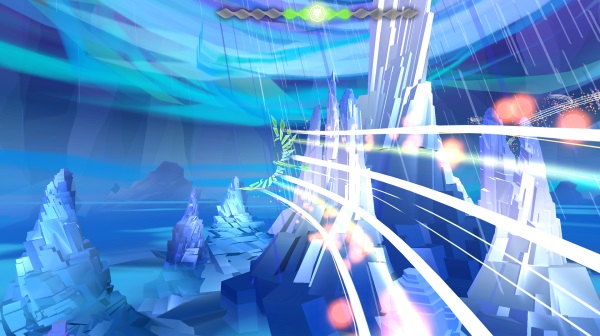 The game features two ways to enjoy it. There’s a campaign made of nine levels that cover a variety locations and themes, both visually and musically. There are also five challenge stages that can be played, though you have to hit a required score on one to move on to the next.

At the end of the day, Entwined succeeds at taking a simple gameplay mechanic and making it fun and addictive. If I had to raise a complaint with the game, I would say 9 levels felt too short – I definitely wanted more. There’s plenty of replay value here, though, so I can’t complain too much.

Presentation
The folks at PixelOpus may not be vast, but they’re excellent at their craft. The levels are filled with beautiful, eye-popping color that flies by. Tied together with an excellent soundtrack from Sam Marshall (who’s worked on titles like Starhawk and Uncharted 3), the feedback loop is quick and satisfying, tying everything together into a driven audiovisual experience. Still, for everything it does right, I did see a couple of in-game hiccups that caused the game to skip a few frames, costing me precious gates. They were very rare, though. 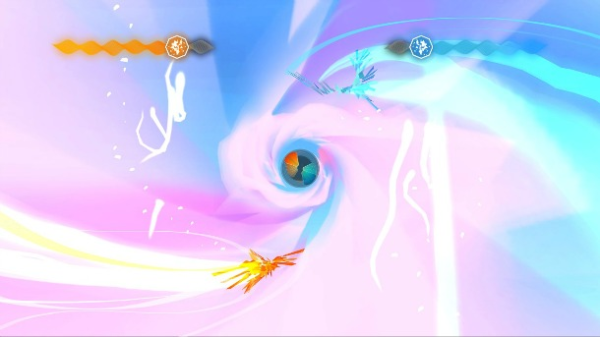 Conclusion
Entwined is an excellent rhythm-based game. It utilizes beautiful visuals and an excellent soundtrack to tell a surprisingly deep story. It presents an excellent challenge without feeling overwhelming, save for the Challenge stages, which hold their name with honor. If your average indie title is a pop concert, Entwined is a symphony. I can’t wait to see what the folks at PixelOpus come up with next.

To see the game in action, check out my recent playthrough of the game!