Imagine if Guitar Hero and Undertale had a baby. That baby would look a lot like Everhood, a rhythm RPG set in a whimsical, dreamlike world. Battles take place on what looks like the neck of a guitar and players have to dodge, deflect, and attack enemies on this battlefield that feels ripped right out of a Guitar Hero game. But how does this all mesh together as a complete game? Read on to find out. 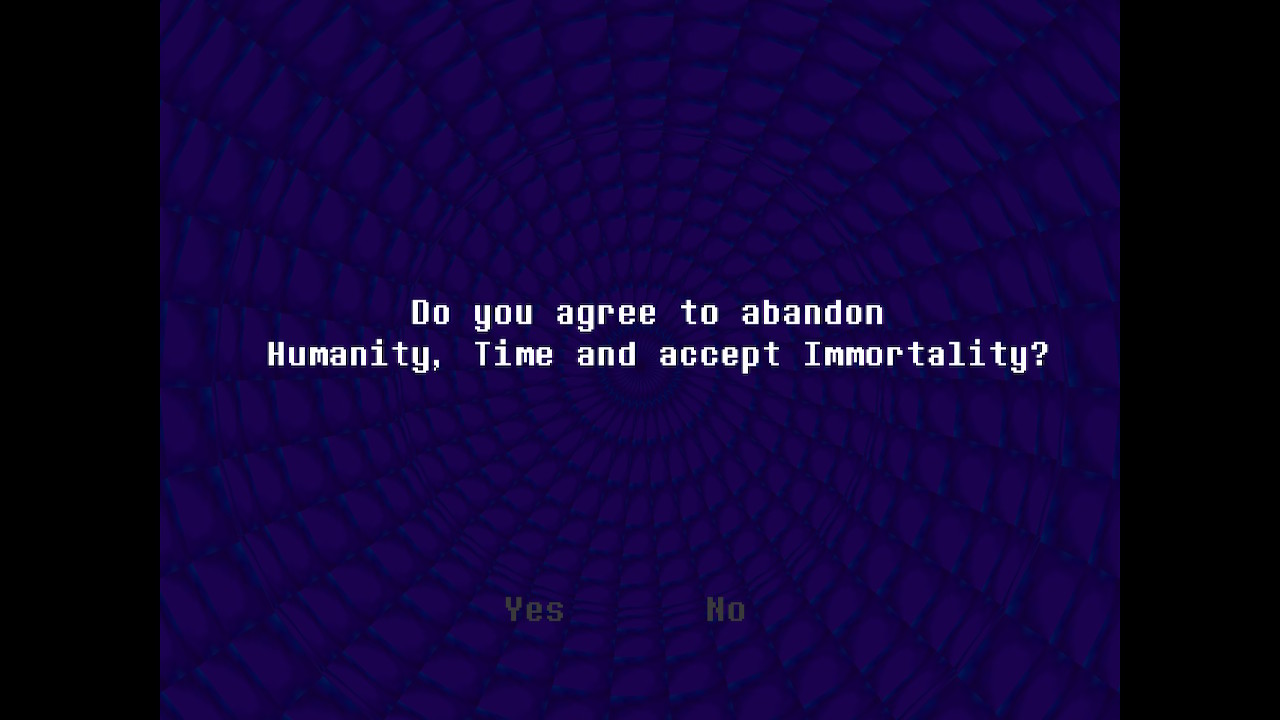 Periodically the game will ask the player existential questions like this one.

Violence: There is violence but all the action takes place on a music grid and attacks are energy waves set to the beat of the song that plays during battle. There is no blood, gore, or viscera.

Drug Use: The entire game feels like what might be the result of taking an unknown substance and sitting down to play Undertale just as it kicks in. There are references to drug use and characters drinking. Very early on in the game players will pursue the villain into a night club where alcohol is present.

Language: Not much here. The game is rated E for Everyone.

Sexuality: There isn’t really any sexual content in the game and I didn’t pick up on any innuendo in the dialogue either.

Spirituality: This is the bulk of the content in the game that might raise some eyebrows for those playing. The game occasionally pauses the action at certain scripted moments to ask the player directly questions about life and what it means to be human. A lot of this feels ripped straight from a philosopher’s notes some of it does pose interest concepts to ponder, such as “Would you give up your humanity for immortality?” 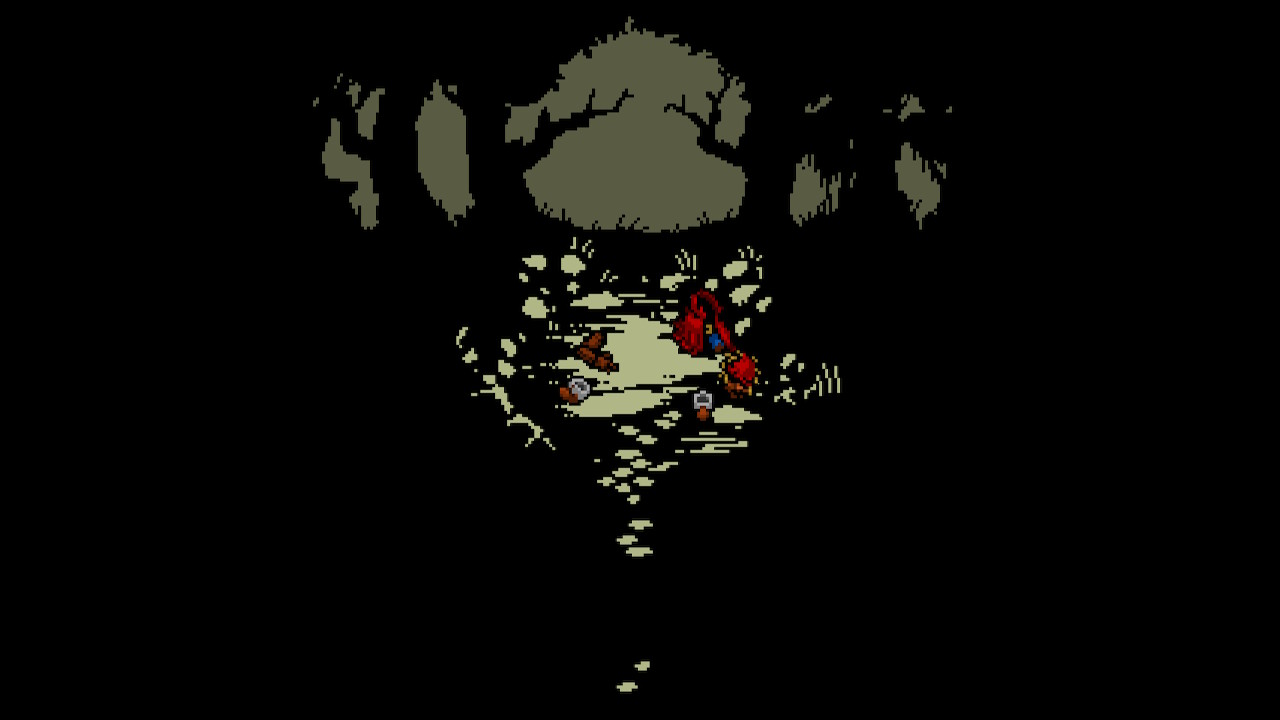 The game starts with our wooden hero awakening to having his arm stolen by a Gnome in blue.

Everhood feels like Undertale met Guitar Hero in a bar one night and then they went home together and some months later, gave birth to beautiful new game. The art in the game is fantastic and is done in that retro 16-bit style which looks great on modern TVs. The colors really pop and everything feels retro but brand new at the same time.

In Everhood, players take control of a wooden man who gets his arm stolen by a blue gnome. Soon after, the protagonist (referred to by others as Red) sets off in pursuit of the gnome (a minion of the true villain, a Golden Pig) to retrieve his arm. Along the way, players will encounter many whimsical and trippy characters who will either help them or become a hindrance on their journey. 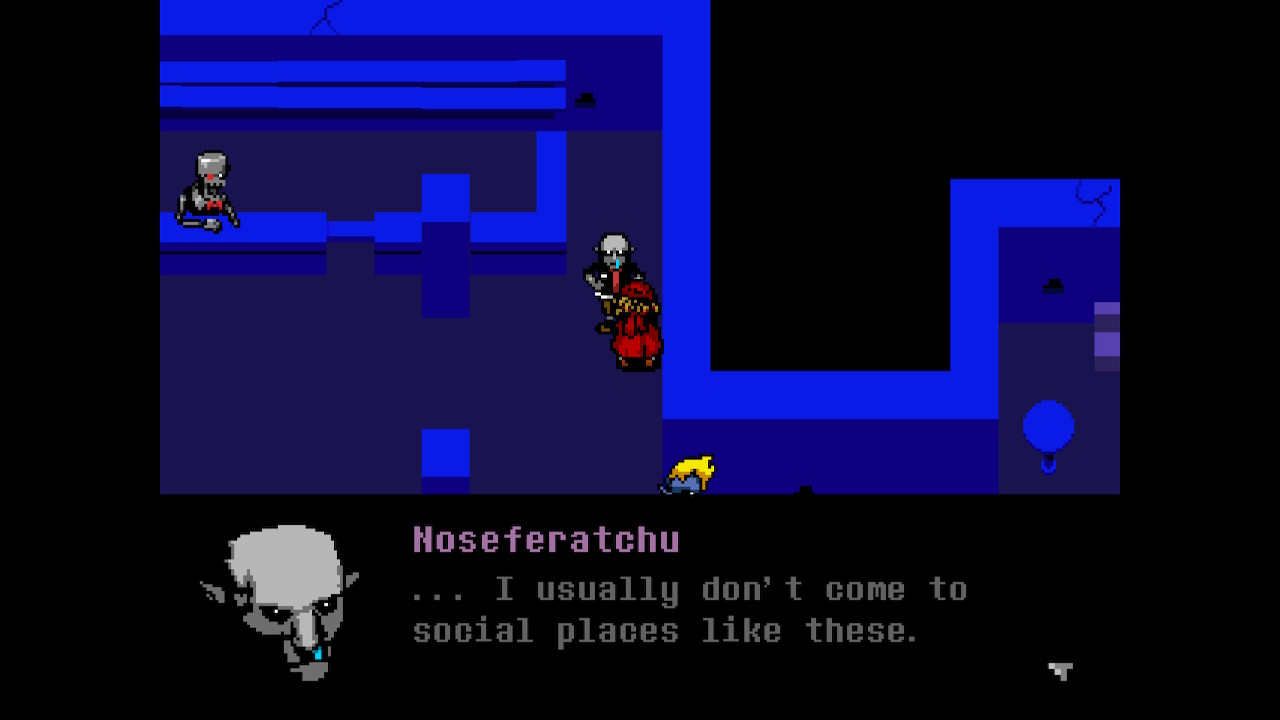 The game is full of punny characters like this guy…Noseferatchu. Sound familiar?

When conflict does arise, the game switches from an overhead, retro RPG perspective to that of a Guitar Hero-esque grid. Battles are rhythm based and the thumping,  aggressive soundtrack will give player’s hands quite a workout in trying to dodge, deflect, or counter these attacks. While I have some gripes with this combat system, overall it works well and the incredible soundtrack makes the often punishing difficulty of these combat encounters worth it. 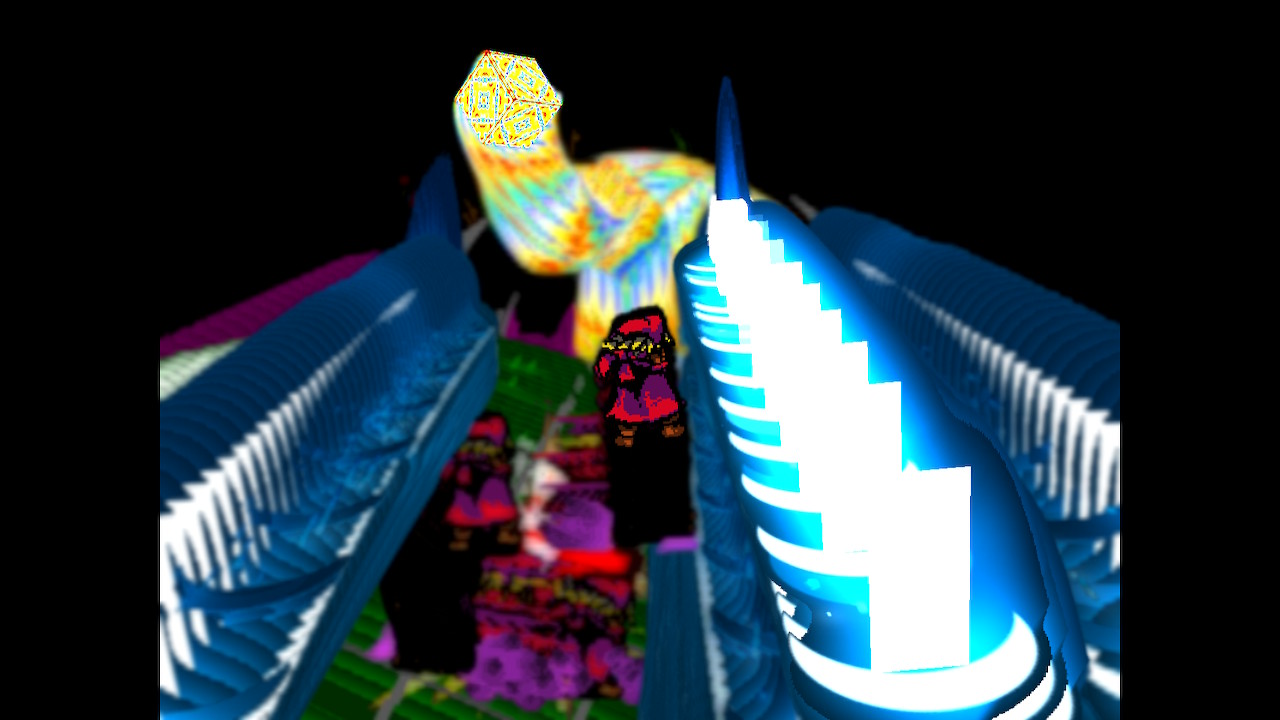 Battles can get really trippy with colors and visuals obscuring the attacks you need to be dodging.

But roaming the world in search of these battles or NPCs to talk to is not all players will do in Everhood. You see, the game is full of unexpected moments and surprises are around every corner. One section has me navigating a maze to find a one-time use Glass Key while avoiding a monster who relentlessly pursues me. While each encounter with the monster features the same musical battles as the rest of the game, this time there is a spring that appears amongst the ever flowing attacks that can be jumped on to escape.

Other segments may turn the game into a bullet hell shooter where you’re dodging screen filling projectiles before even entering a musical battle. Mini games are also peppered throughout and these consist of footraces, car races and other activities. These are good alternatives that advance the story in unexpected ways and break up the monotony of the frequent and often punishing fights.

Similar to Nier: Automata, players will experience several different genres of games within just the first couple of hours of Everhood. It’s a difficult game to really define because I never really knew what experience was coming around the next corner. While overall, I think this is the game’s biggest strength in that it can’t be pinned down and lumped into one category or type, I did have some qualms with the gameplay. 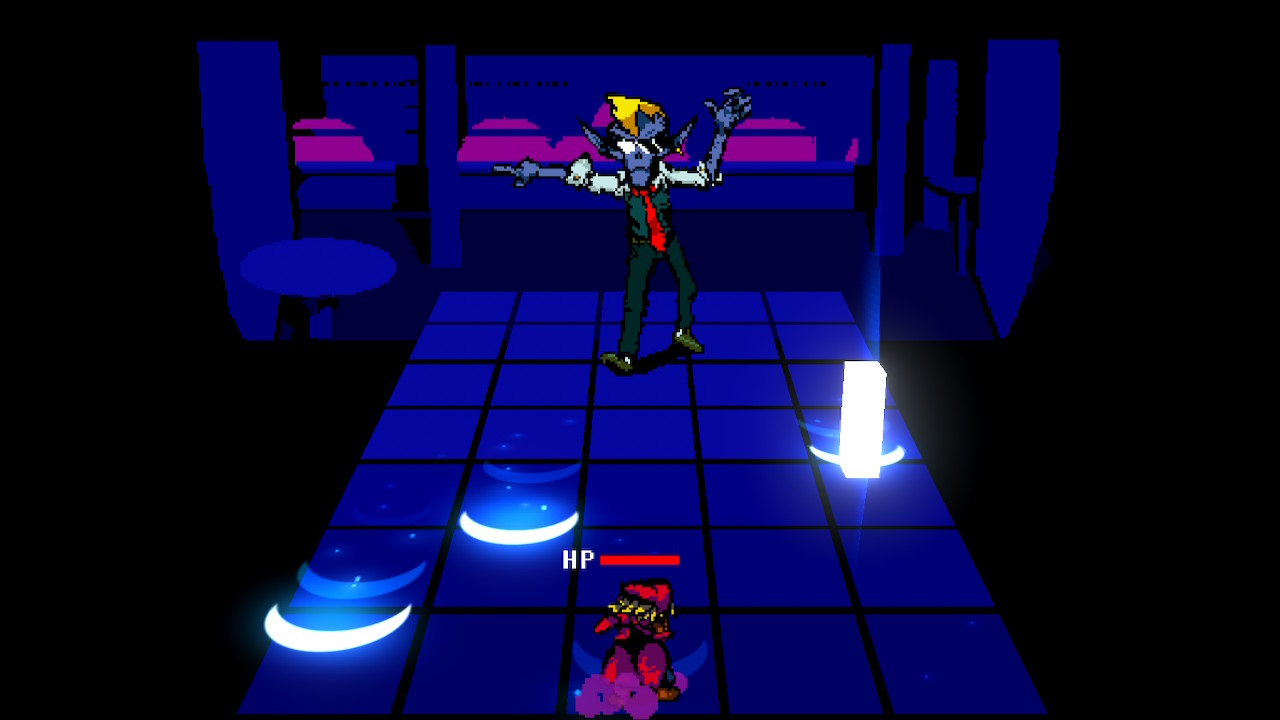 This guy gave me a run for my money several times until I got the hang of the music battles and realized their were checkpoints for this fight.

Very early on, there is a character you battle with in a night club who feels like the first true boss battle of the game (despite having battled a sentient ATM Machine moments before). During this fight, its clear there are multiple stages but the game doesn’t outright say this and unless players just breeze through the first few phases of the fight, they likely wouldn’t know that for the longer battles there are checkpoints. I can’t recall how many times I died in this fight before realizing that there were checkpoints and multiple difficulty options to make things a bit easier. Before that, I was forced to reload my most recent save prior to this fight and start anew each time.

Changing the difficulty doesn’t change the pattern or frequency of enemy attacks as that’s all based on the beat of the song playing. What does change is how much damage players take from a hit and how long it takes for them to recover health after getting hit. Its not a bad system at all once I was able to get used to it but for players who are easily frustrated at repeating segments again and again (like myself) it may take a few tries to really learn this system. But in doing so, it will really enhance how much players enjoy the rest of the game. Once they know how everything works, they can focus on the journey ahead and getting their arm back from the Golden Pig and his minions who stole it. 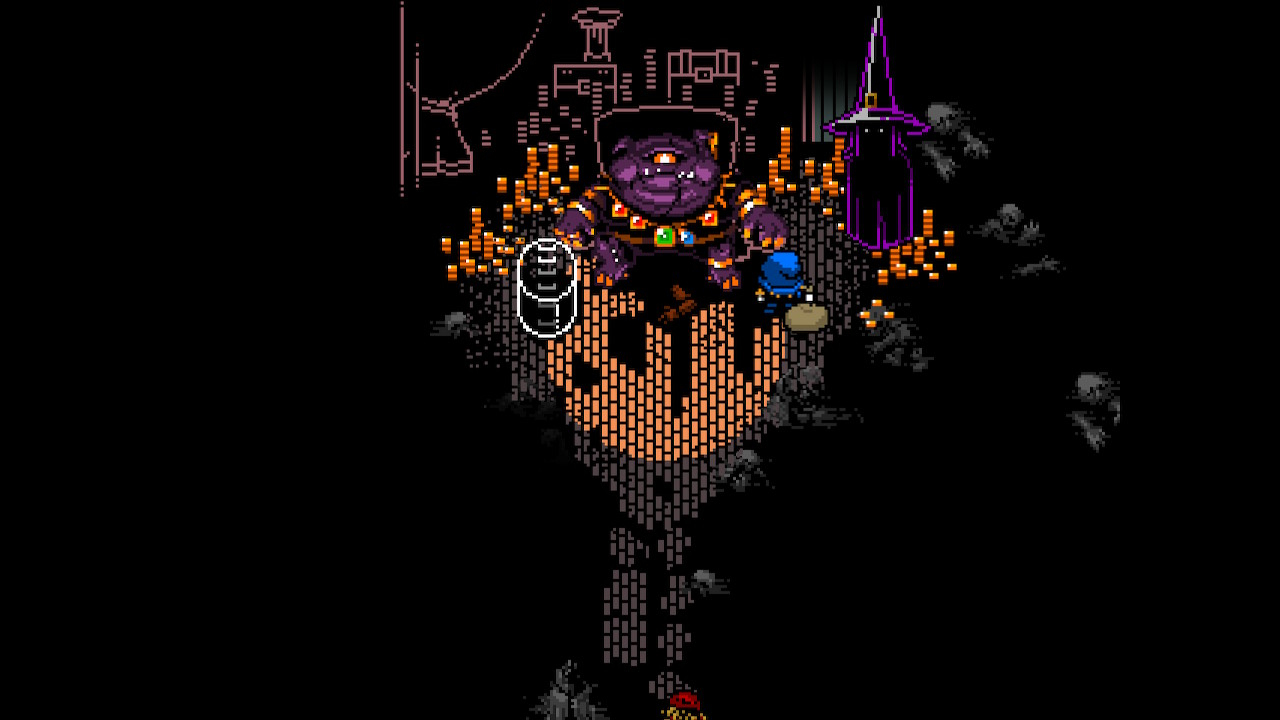 The main antagonist of Everhood…the Golden Pig and his cronies!

Another complaint I have is that the paths players can walk in the game oftentimes blend into the invisible walls at the edges of the environment so I found myself walking through just a black screen most of the time. I wouldn’t know if I was going the right way (or just walking in place into an invisible wall) or not until I happened upon a streetlight (Everhood’s version of save points) or a new group of NPCs to interact with.

I don’t expect the game to hold my hand but there were literal instances where NPCs gave the most vague description of where to go or what to do next but the environments themselves gave me no visual clue as to how to get there. A few times I walked in a circle and looped back to the town I started from before reaching the next new location to advance the story. 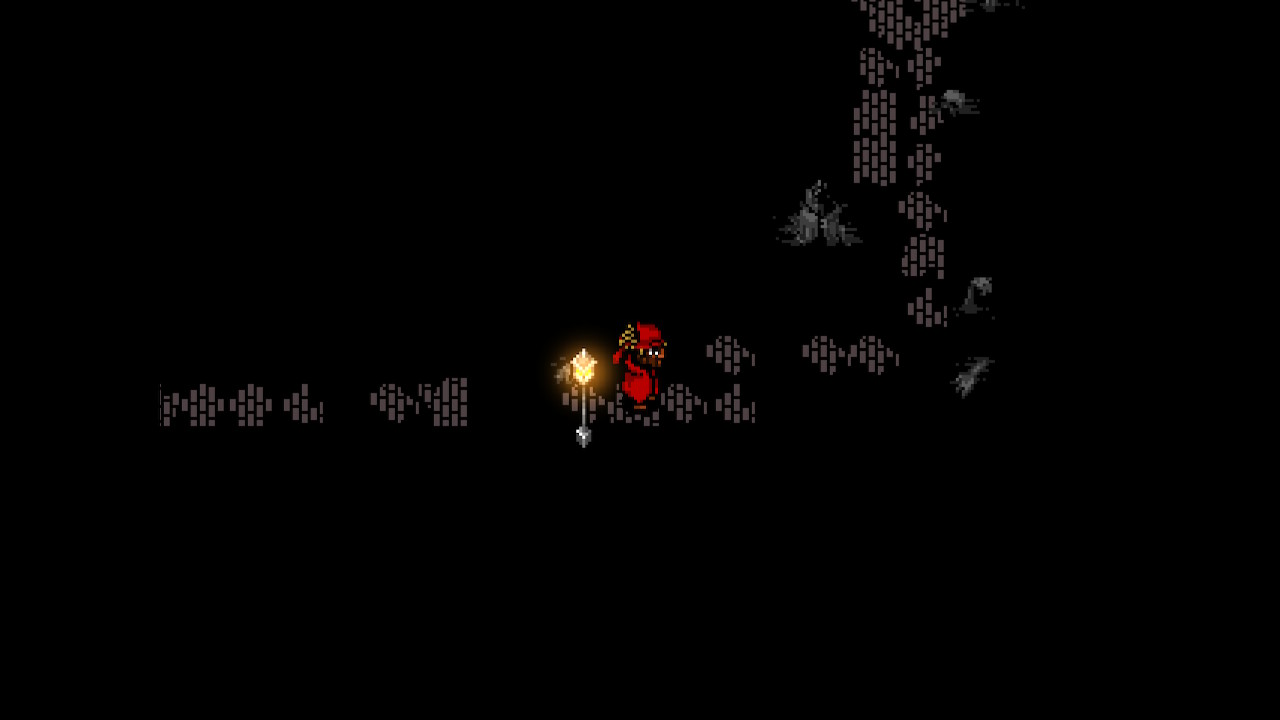 Pathfinding can be hit or miss as this brick path can quickly turn into just the blackness around it which may in fact be the way I need to go.

Beyond some confusing pathfinding and the initially frustrating battle system, Everhood is a breath of fresh air in the industry. It takes several genres like RPGs, music games, bullet hell, etc. and turns them on their heads completely. Sometimes the battlefield itself literally turns on its head and forces players to work with inverted controls to succeed. One never really knows what to expect from Everhood as there are surprises in both gameplay and storytelling around every corner. I highly recommend it to fans of music games, RPGs, or just gamers looking for something new and fresh that is unlike anything they’ve played before. If players can get past the grueling difficulty in the earliest parts of the game, they will find a whimsical fantasy tale that combines elements of genres they already love into something truly unique. 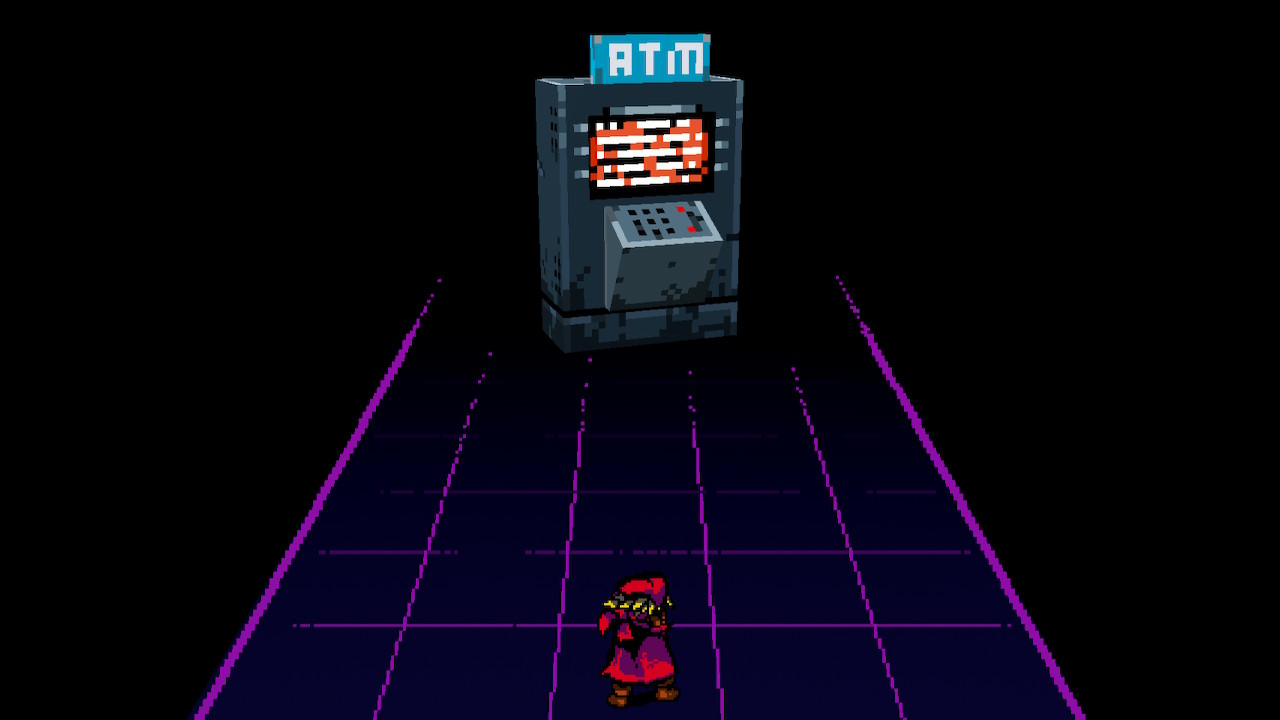 Look man, I just wanted to make a withdrawal. I don’t want any trouble!

If players can get past the grueling difficulty in the earliest parts of the game, they will find a whimsical fantasy tale that combines elements of genres they already love into something truly unique.