Middle of the Pack

As someone who isn’t a big tabletop player, I see so many games that I would love to play, but I don’t have a solid group to do so. Digital versions of classics such as Monopoly have been releasing since the days of the SNES. However, that has continued throughout the years with recent popular games such as Wingspan and Root. The idea that I can enjoy these games against AI or online allows players to enjoy such games.

Enter the Nintendo Switch, possibly the perfect platform for digital tabletop games. Releases such as Catan and Carcassone make it possible for friends and family to pass and play without even buying the physical versions. Evolution joins those many digital releases and offers a competitive angle that might appeal to people who are already into digital card games. Does Evolution stand its ground, or will it get gobbled up by the abyss that is the Nintendo eShop?

The game of Evolution takes place around a watering hole. The basic premise is that players must survive as herbivore or carnivore types of species. The herbivore playstyle is much more passive and gains food from the watering hole while the carnivore must attack fellow players. Visually the carnivore player icon will gain claws when choosing that playstyle and scratches at other player icons. These icons wither away when a player’s species dies out. There are cards that players can use to prevent themselves from being attacked.

All action in Evolution plays out through icons and cards that resemble the board game. A significant positive note is that a biologist designed the original game for educational purposes. So, it can be fun to think of each session as an interactive Nat Geo or Discovery channel experience.

When I first saw Evolution at PAX South 2019, the concept intrigued me. The premise is simple: control a species of animals and survive. However, survival isn’t easy at the local watering hole. There are rival species that are also fighting for survival, and some of them are predators. Will you stand your ground as an herbivore or fight back and evolve into a carnivore? Having also seen the physical board game in action, I found this adaptation to be faithful and an enhanced experience.

There is plenty for players to do in Evolution with a variety of single-player and multiplayer options. A full campaign, daily challenges,  and AI matches are available to those that aren’t ready to face off against others. Multiplayer offerings include local pass & play, and online matchmaking.  Crossplay is also available when playing online, which broadens the range of opponents strongly hindered if matchmaking was limited to one platform. I was pleasantly surprised at the wealth of options that I could sink my teeth into.

While there is much more to it, the result is to have the most points. Your population count, number of trait cards, and food amount add up into a final score at the end of the match. What I enjoyed about this end goal is the strategy of how you get those numbers. For example, my species could eat a ton of food, but didn’t have the population or enough traits to stack up against my opponents. For some opponents, the end game meant placing as many species as possible and adding enough traits to push them into victory.

The single-player campaign is where I spent much of my time with Evolution. In this mode, you will be learning about the various cards and strategies of the game that you will want to keep in mind as you spend time playing actual matches. The gameplay resembles a real match but acts as more of a series of challenges to complete before moving forward.  In between, you’ll travel across a map and occasionally encounter AI opponents called Apex Predators. These encounters are equivalent to boss fights and act as skill checks. The reward for defeating them is that their icons become available to use for your species and viewable sketches. 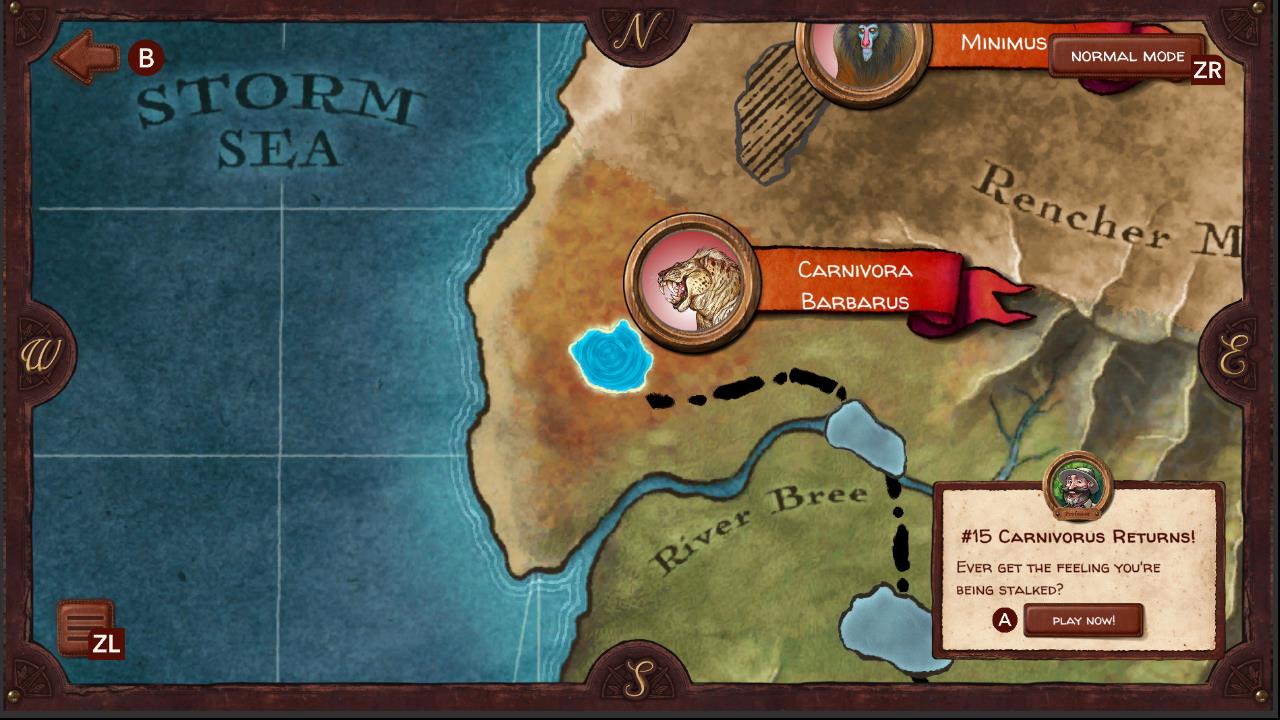 When I would struggle with a single-player challenge, I would take a break by playing an AI match or against online—the crossplay features worked without any hiccups. It took only a few seconds to log into an account that I made on the mobile version for cross-progression. So, if you’re a returning player who has sank some time and progress into the game, jumping right back in shouldn’t be an issue.

Sadly, a few flaws keep Evolution from being the top dog. I feel like navigating the field could be better and feels awkward. The Switch version does include touch screen controls that came from the mobile version, but using the Switch’s touch screen for extended periods isn’t very comfortable. The second issue is that the playfield’s lighting doesn’t seem to cooperate when the camera zooms in on the action. While the background darkens, the exposure dials up to an intensity that gets in the way of the cards’ art and description. It’s as if someone is pointing a flashlight right at the cards for some odd reason. 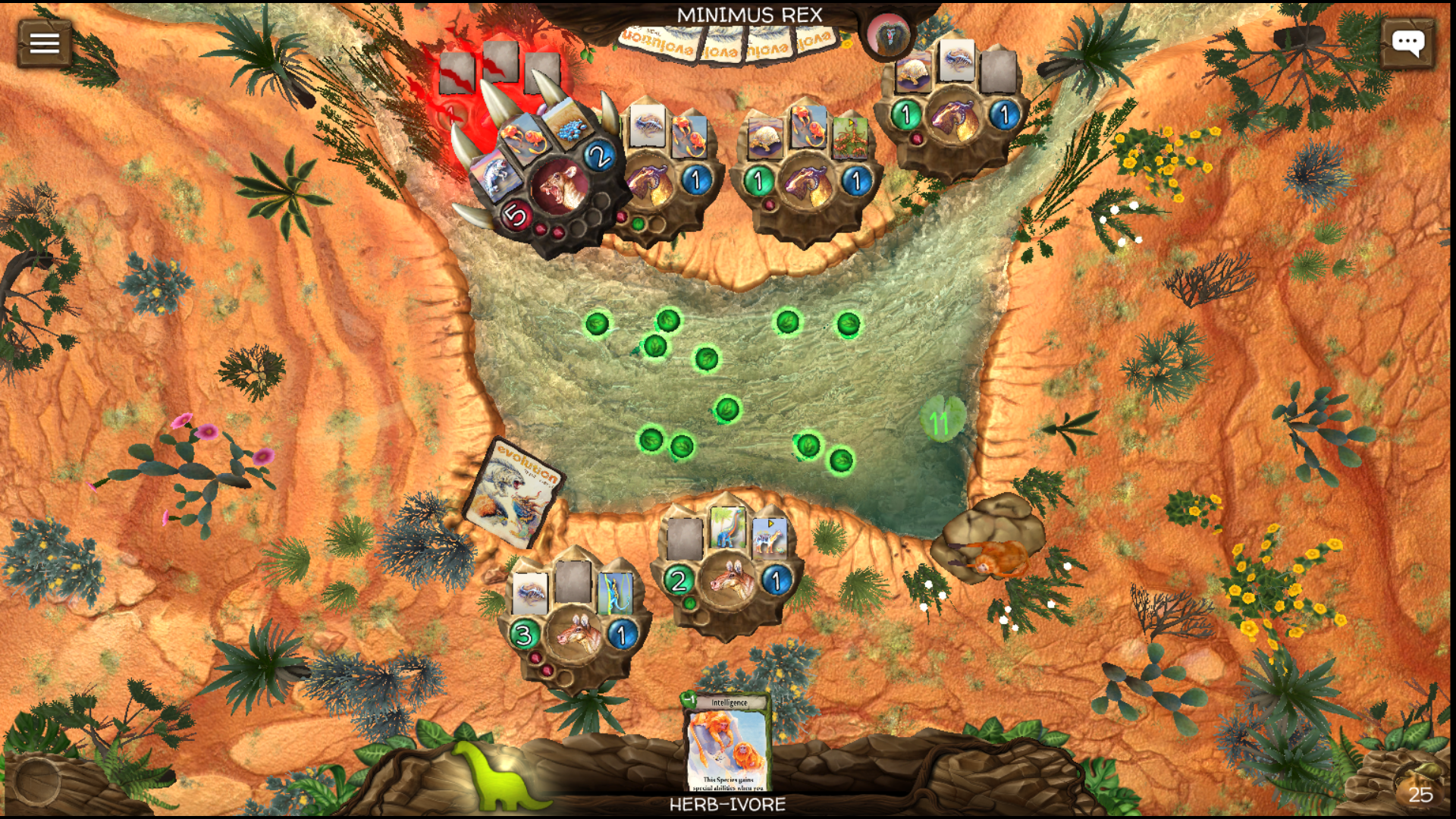 Despite the game’s weaknesses, the presentation is one of its major strengths. The setting of each match is always a watering hole, but I appreciate how the theme changes. As someone who dabbles in drawing myself, I’m also fond of the unlockable sketches. Lastly, in the spirit of the game’s educational roots, small facts about animals are present in the loading screens. The theme adds to what I’d consider being low energy gameplay and creates a relaxing experience that was very welcoming compared to the action games that I usually play.

As someone who does their gaming mostly on a screen, I was happy to experience Evolution in a medium I know and love. It is an easy game to learn but offers some depth that its target audience can get behind. However, I can’t help but think that I should be playing the actual tabletop game. The aesthetic and gameplay work in harmony, but the shortcomings keep it from being as polished as some of the other digital tabletop experiences out there. Recommending this game at the price of $20 doesn’t feel right, especially when the game is free on mobile devices and where you’ll have the best experience. 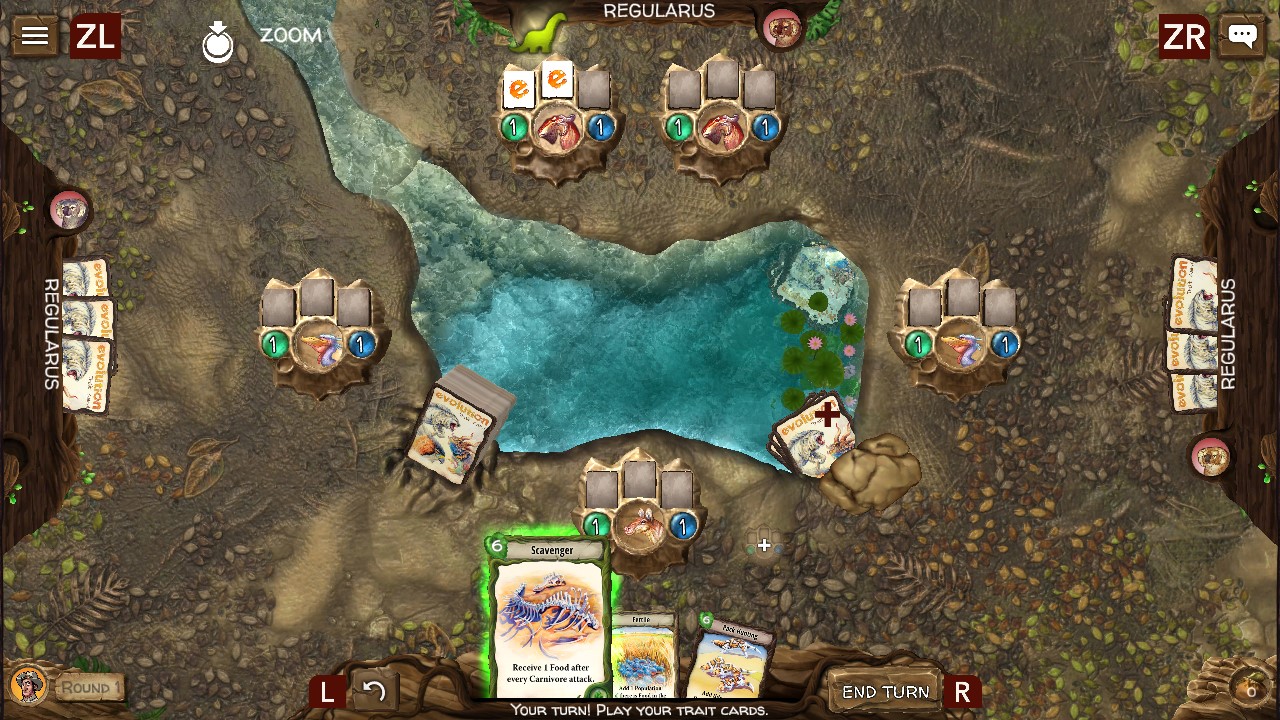 Evolution didn’t hook me as much as I hoped it would, but I enjoyed the time I spent with it. I’ll be purchasing the physical version out of respect to North Star Games for crafting a tabletop game that caught my eye.

Evolution translates well into a digital experience, even though the Switch port is lacking in quality.