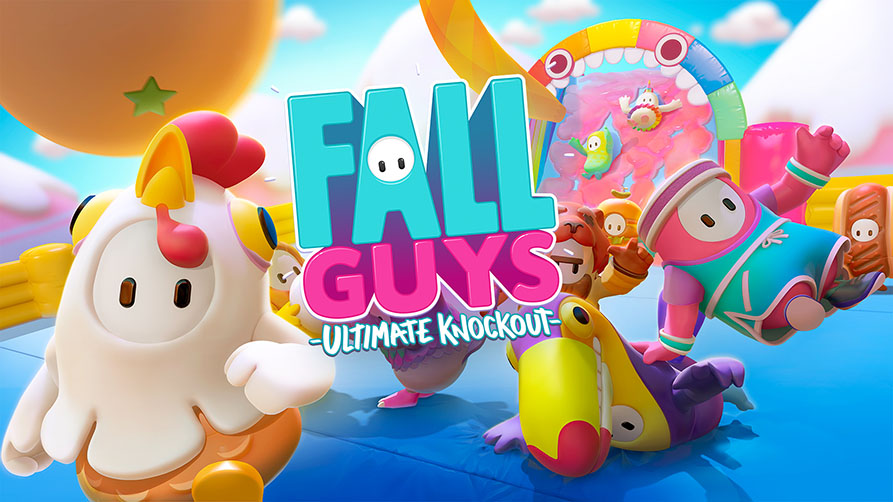 Ever since Fall Guys was revealed during E3 last year, it looked like fun. Nearly a year later, I was accepted into the closed beta and had the opportunity to experience the game for myself after some had seen it during a few PAX events. During that beta period, I got well acquainted with the chaos of these little bean-like creatures that attempt to survive dangerous obstacles. I spent ten hours in that beta before the game even released, and plenty more when it came out.

Just before release, Mediatonic opened up the floodgates to get as many people playing as they possibly could into that beta. With the NDA also lifted, it became one of the most popular games on Twitch. Then, just before release, they announced that Fall Guys would be coming to Playstation Plus, thus getting the game into the hands of more people. Does the viral status of the game prove that it deserves a seat alongside some of the most popular games of the year?

With the rating of E for Everyone, Fall Guys: Ultimate Knockout is safe for the whole family. Players take control of a character to complete various obstacle courses and mini-games against 59 other players. The courses include hazards such as swinging balls, hammers, and much more that may knock the character out of bounds. There is no blood or any cries of pain as the characters come into contact with those hazards or fall off of a course.

There is no voice chat, so players don’t need to worry about communicating with any possible toxic individuals. However, griefing can occur via the game’s grab mechanic. Some players will grab others and prevent one another from crossing a finish line or knocking one another out of a course if there is any possibility to do so. 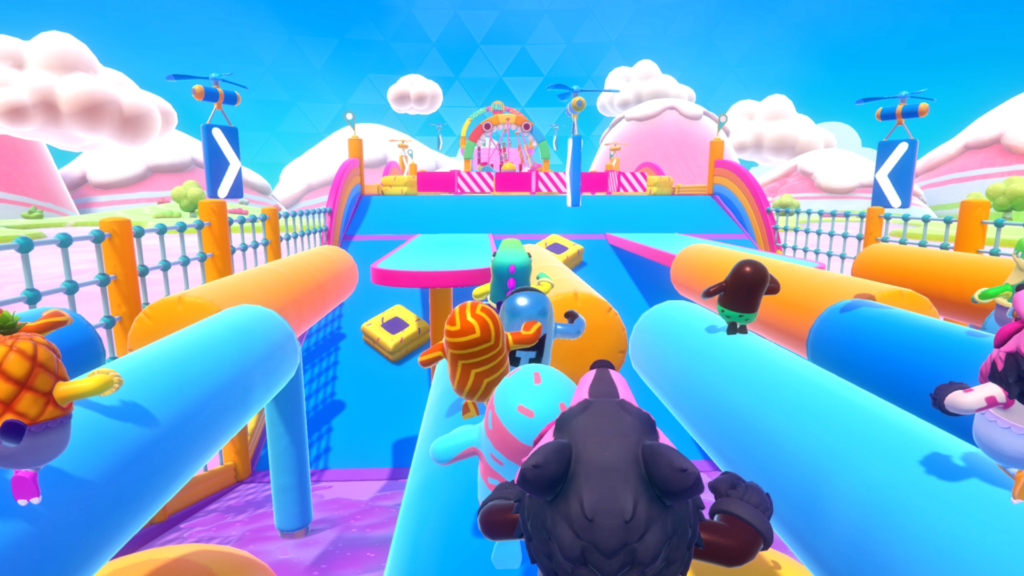 Fall Guys: Ultimate Knockout is a strange game to describe. You play as a stubby little character looking to be the winner of a competition. This competition is comparable to game shows such as Total Wipeout and MXC. The closest genre I can compare it to is a battle royale, as competitors get eliminated, and there is only one winner. Frankly, it is one of the most innovative takes on the genre I’ve experienced because it isn’t a shooter.

Fall Guys boasts a brightly colored and bouncy aesthetic, as if it was inspired by one of those blow-up playhouses you find at a child’s birthday party. It gives off a fun and friendly vibe, which is perfect for a game that is very passive-aggressive and aims to be accessible for anyone to jump into. The fun doesn’t stop there, as the characters that you control can be equipped with delightful colors, patterns, and other cosmetics that carry that same fun-spirited attitude.

Each match of Fall Guys consists of four-to-five rounds and starts with sixty players. As the match progresses, there is a limited number of players that can qualify. It feels like this game takes some notes from Mario Party as you never know what mini-game you’re going to get—so, life is like a match of Fall Guys! Some of these games are obstacle courses that require players to cross the finish line, while others are team-based like Egg Scramble and Fall Ball, and there are the few that will ask you to simply survive. The final round usually includes Hex-a-Gone, Royal Fumble, or Fall Mountain, which requires players to climb the last obstacle and grab a floating crown. I’m still salty about a particular match I almost won where I didn’t know that using the grab button on the crown was required to get the win instead of touching it. 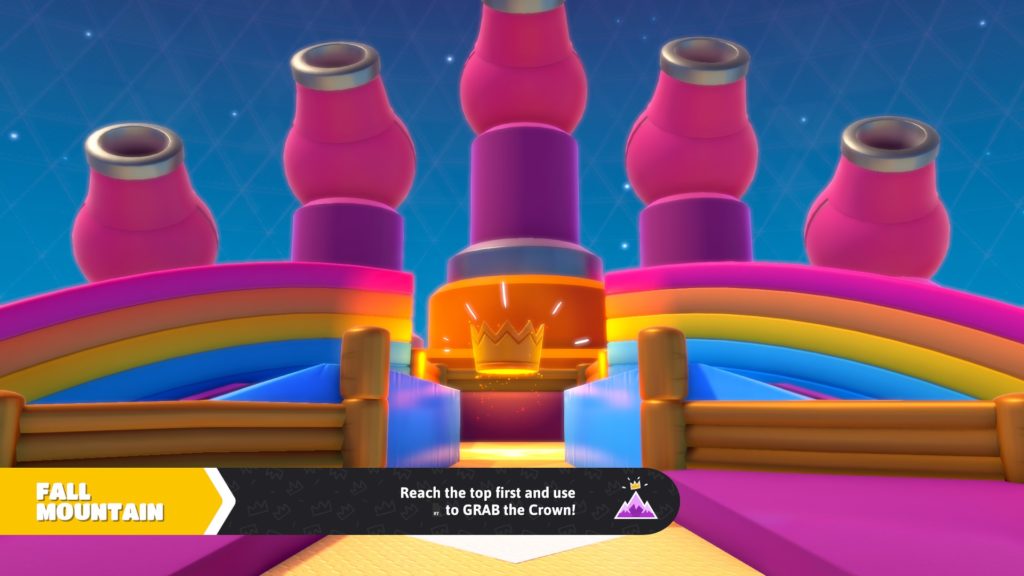 It was in the instructions….

The consensus I’ve seen when it comes to favorite mini-games usually includes the team focused activities at the bottom. While I agree that the chaos of these particular rounds means you don’t have control over whether you win or lose, I find them to be a nice change of pace. My favorite team games are the two I previously mentioned; Egg Scramble requires you to keep/steal eggs for your team’s basket while Fall Ball is basically Rocket League without the cars. These round types serve as a huge reminder that we shouldn’t take Fall Guys too seriously and that it is very much a party game.

One of my favorite characteristics of Fall Guys is the passive-aggressiveness that I mentioned earlier; the only controls that we have at our disposal are movement, jump, dive, and grab. There aren’t any weapons or pick-ups because the obstacles do the work for you and knock players away or prevent their progress. However, people use that grab button aggressively by trying to grab other players and prevent them from crossing the finish line or pushing them off of a platform. I’m positive that these occurrences likely enrage players, but I find some of these moments to be quite hilarious. 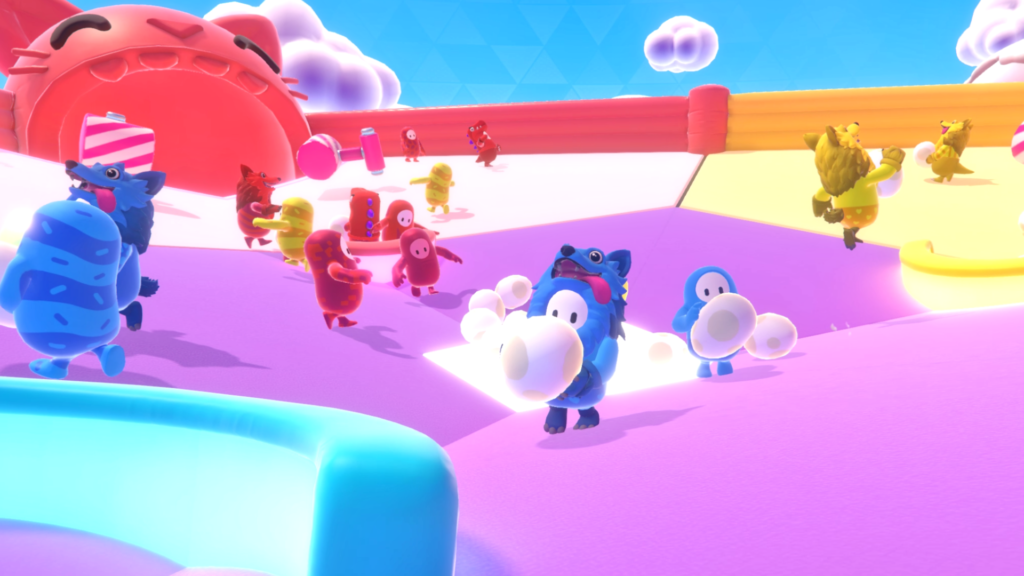 “Get away from my eggs!”

So, what is the thing that keeps us playing? Fall Guys includes a battle pass-like progression system in which you will earn cosmetic items and currency as you play. There are two types of currency: Crowns and Kudos. Crowns are earned by winning matches, while kudos can be acquired through progression or bought through the in-game store. That store has items that will rotate periodically, featuring cosmetics related to other Devolver Digital properties and even Half-Life for our PC players. The monetization seems relatively innocent so far, but I could see the possibility of paid battle pass options coming in the future.

It is also possible to play with a group of friends online, and with no local split-screen option. You won’t be squadding up with your friends as you would in a typical battle royale game, but will be together during those dreaded team-based rounds. You are competing against one another, but it is fun to see who survives the longest and to cheer for one another to get that win. For my particular group of friends with whom I play Call of Duty‘s Warzone almost every night, this was a fun palette cleanser as we waited for that game’s fifth season to drop.

Honestly, there isn’t much wrong with Fall Guys. Its physics might be a little crazy, but those familiar with games like Human Fall Flat and Gang Beasts will feel right at home here. The biggest issue is that if the game isn’t updated enough, it could get stale. After spending so much time in the beta, the first few hours I spent in the full game weren’t much different, and I was done with it quickly until I took a break and went back. I’m not saying they need to add new mini-games frequently, but that they should have fun events that center around holidays and anything else they can think of that plays with the game’s presentation. 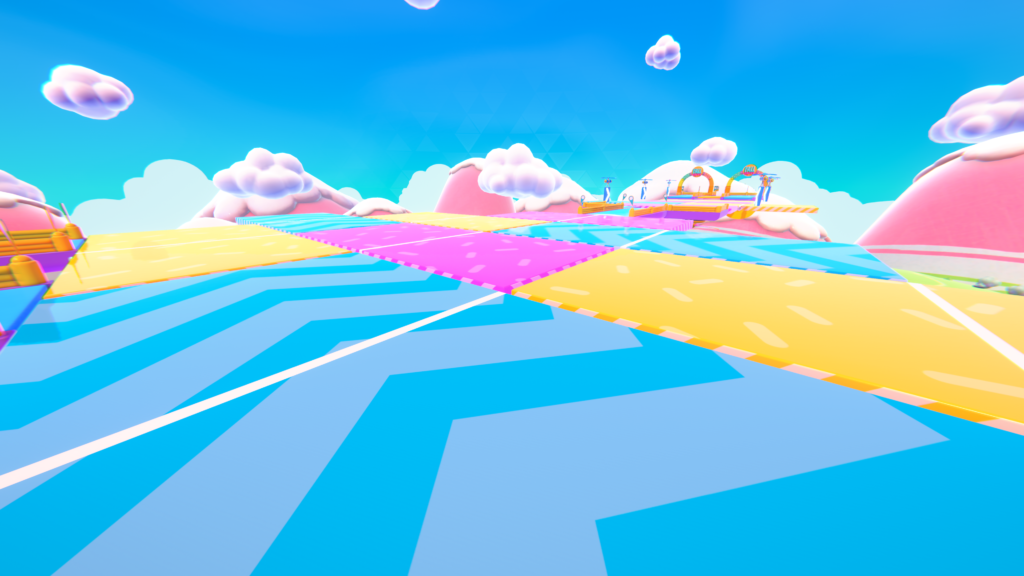 Despite my initial burnout during the launch period, I still enjoy Fall Guys and have had a great time streaming it. My biggest pro-tip is to work around everyone else’s idiocy and let them be the first to succumb to the dangerous obstacles, though for See-Saw, you may want to be at the front of the pack and run through before everyone else does. This is a game that even your family members who don’t play video games might also want to try, which means that it should be in the conversation when Game of the Year season comes around. Some might say that Fall Guys deserves a seat at the kid’s table alongside Fortnite, but it has gotten the attention of anyone who spends time on the internet just like its older sibling.

Fall Guys is a great time whether you are playing alone or with friends and family, though it can feel repetitive after you've seen all that it has to offer.