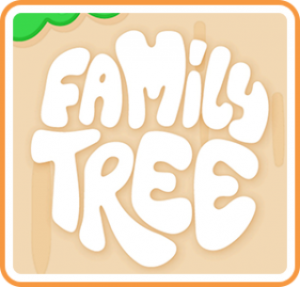 A couple of years ago, I discovered an indie title called Rogue Aces—a rogue-like, WWII airplane game with addictive gameplay. As flooded as the Nintendo Switch eShop can get with hundreds of games released each month, this little gem became one of my favorite games of 2018. I eventually interacted with the developers over Twitter when I shared some gameplay clips of Rogue Aces and have been following their work since then.

Now, Infinite States Games is back with a unique puzzle game called Family Tree. Fall is a known busy season for gaming, and it can be easy for the work of small indie developers to fly under the radar. Maybe you just got your child a Nintendo Switch Lite for Christmas and can’t afford some of the more prominent first-party titles. At a budget price, Family Tree is a game that everyone can enjoy on that shiny new console.

Family Tree is rated “E for Everyone” by the ESRB. The antagonist of the game is a big skull that sucks in the Fruits Family’s children at the beginning of the game. Spend too much time on a level, and he shows up and causes the player to drop all of their collected items. During transition levels, players will have to run away from him as darkness and lighting begin to cover the level. A variety of enemies are also placed throughout the levels, such as a squirrel that throws nuts and piranha fish. The player does not take damage, but can lose their collected coins and fruits. 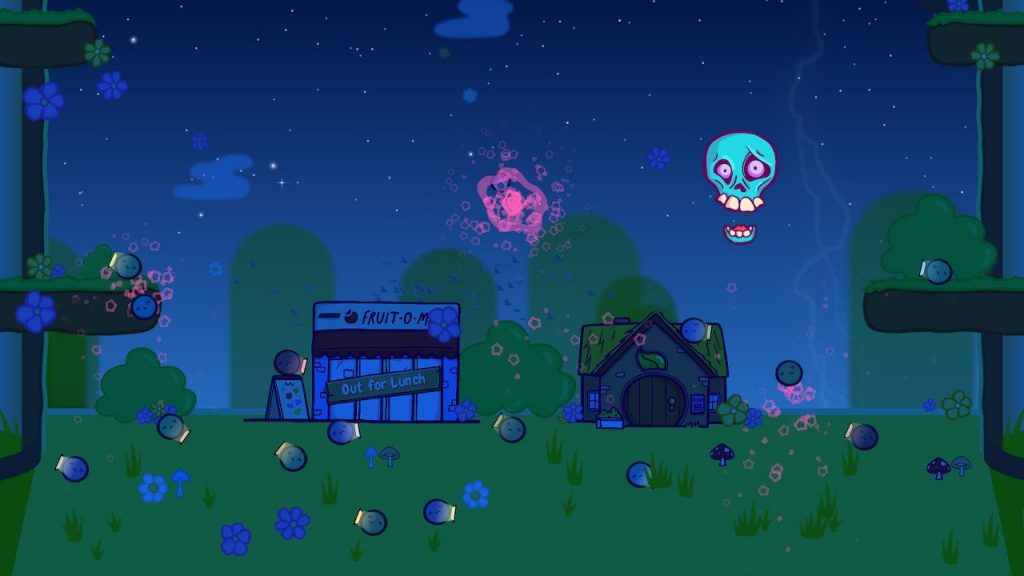 Family Tree is a puzzle game that an audience of all ages can enjoy. It has a brightly colored art style, fun puzzle gameplay, and a catchy soundtrack. The premise is quickly set up once the game starts. Mr. and Mrs. Fruits tuck their kids into bed. Then, they all get captured by Pedro, the evil skull, and turned into real fruit, which leads Mr. Fruits to jump into action. The plot doesn’t make much sense, but also feels right out of a storybook. That is all there is to the story, but we don’t need much more than that.

The gameplay of Family Tree is a beautiful mix of puzzles, pinball, and platforming. Players can launch Mr. Fruits up in the air with the push of a button and use the stick to aim, with a line of trajectory to help with aim. The shoulder buttons are used for a short dash or hop for extra maneuvering assistance. Most of the levels are also vertical and have an end goal waiting at the top, hence the reason for the game being called Family Tree. 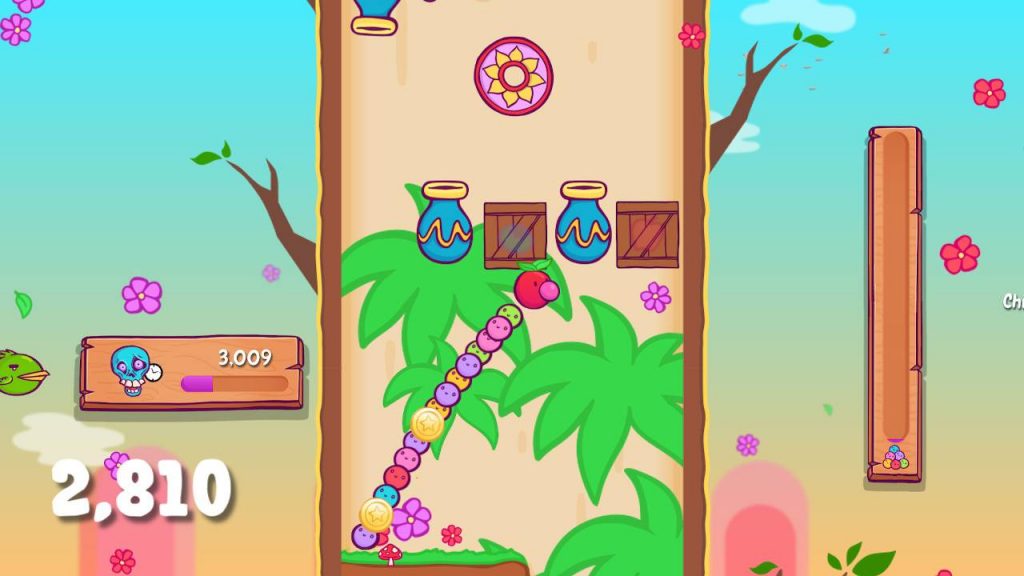 Each level includes various obstacles and enemies that players need to be aware of, including objects that help the player progress. My favorite objects in the game are the pinball-like bumpers and pots that work like barrels like the ones in Donkey Kong Country. The different kinds of enemies that appear to halt progress are block heads, squirrels that drop acorns, and flying piranha fish. Mr. Fruits doesn’t take damage from these foes, but can drop everything he’s holding if he is hit enough times. The gameplay becomes the most entertaining when entering an unstoppable flow through a level.

When jumping into a level, there are a few different objectives that can lead to a “perfect game” result at the end of a level. Players have the option to collect all the fruit and coins within a level, and won’t be penalized if a level is completed without doing so. The third is time based, meaning that Pedro, the evil skull, will show up if a player takes too long to complete a level. The one penalization comes from Pedro because he can cause you to drop everything to the bottom of the level. Completing a level as quickly as possible is the best way to handle that third objective, and it also encourages speedruns. 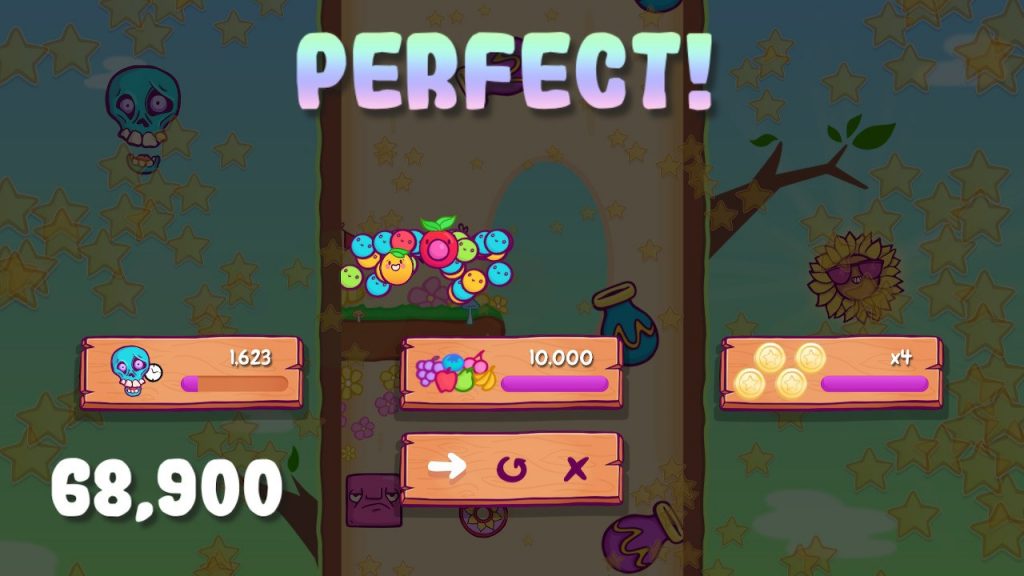 Progression is divided up into four seasons per year, with a total of 120 levels. My favorite aspect of the presentation is the change in aesthetic between each season. Spring and Summer are fun, but Fall and Winter are my personal favorites to look at. The change of scenery with each season makes Family Tree into a game you can boot up year-round, especially if you can’t wait for your favorite time of year or just need something to capture the feeling of whatever season you are currently in.

Between the many levels in Family Tree are what I’d consider the more challenging parts of the game. Between each season, players are thrown into transitional bonus stages different from the vertical setting of the main level. These stages move horizontally and share similarities with the auto-runner genre. Collecting is not the objective here as players must get to the end of the stage without being consumed by the storm of Pedro the skull. If you fall or fail, the stage starts over right away. What I enjoy most about these stages is that they bring the most tension that anyone can feel when playing this game. 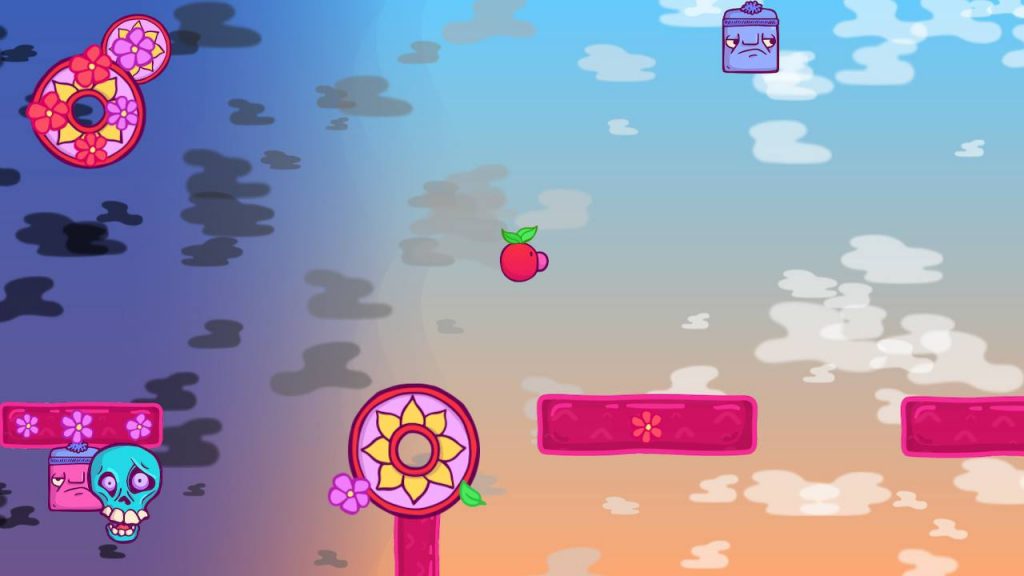 In Family Tree, there is more to experience outside of the primary gameplay mode. Endless Climb is an alternative option and one that three other family members or friends can simultaneously play along. In this mode, the goal is to outlast your opponents since there is no finish line here. Players choose unlocked characters that we see from the main game and travel vertically via platforms as the challenge increases. Endless Climb has the potential to bring a barrel of laughs to the party, especially when more than two players are involved.

Family Tree has, overall, been a pleasing experience. This is one of the few games I’ve played that gives off an infectious feeling of comfort and joy. It was very easy to sit on the couch or lay in bed and binge a few levels. My one fear is that it may get repetitive for some players. The level design gets increasingly creative, but the gameplay doesn’t change very much. This will be a hard one for people to go back to when there are so many other video games out there.

At such a low price, I recommend supporting the developers and purchasing Family Tree. Its simplistic nature seems like the perfect game for very young kids to cut their teeth on before you have them playing some of the more advanced titles out there. It holds a style that beams with wholesomeness through the ever-changing seasons, and a game that I will be returning to whenever I’m feeling down and out.

Family Tree is a fun hidden indie gem with a wholesome attitude that can be enjoyed by the entire household.