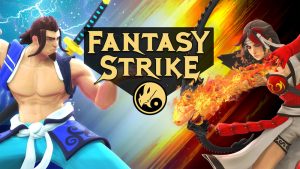 In October 2017, I (accidentally) reviewed Fantasy Strike while still in Early Access. Now, after four years in the works, it will finally be released as a full, completed product on July 25, 2019. In my previous look at this game, I gave a short background, stating that it previously originated from Yomi, a card game. Leading the development team is David Sirlin, founder of Sirlin Games. His goal was to create a game that had a perfect balance of simplicity, yet, having enough complexity for advanced fighting game veterans. While it is indeed entertaining, Fantasy Strike faces an entire wave of other games like it that seek to accomplish a similar goal. Does it stand out among the rest? 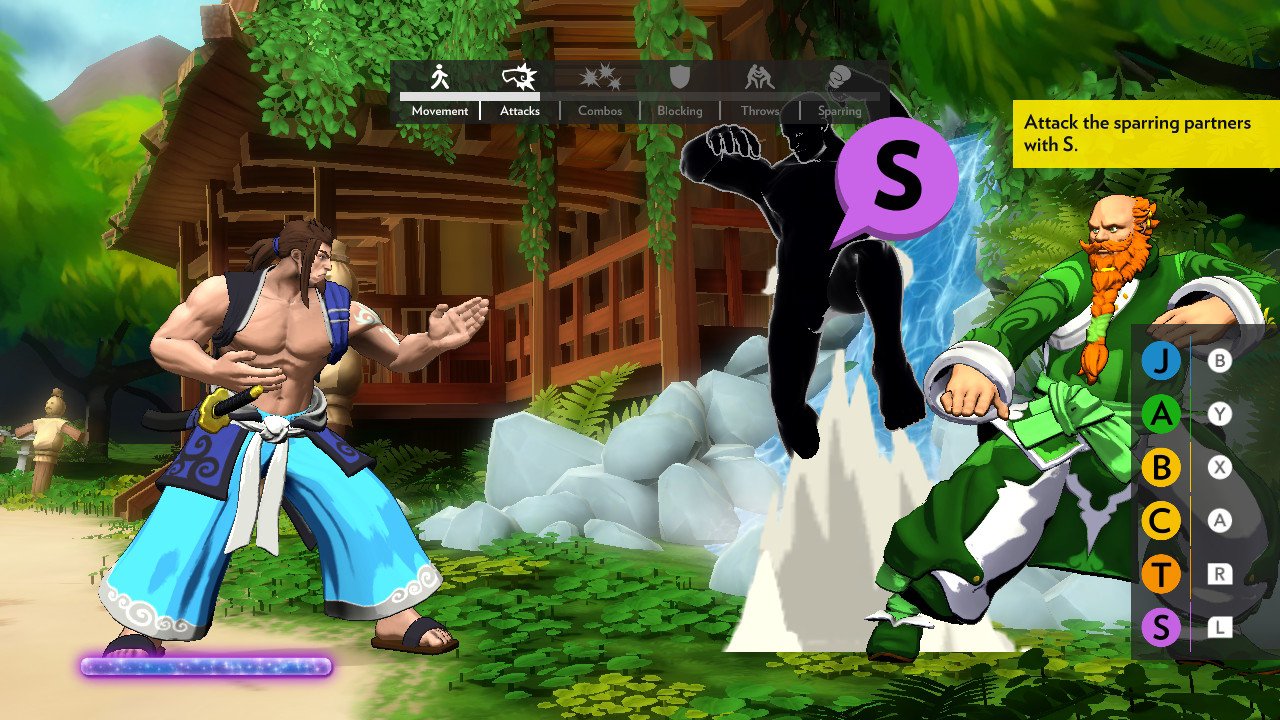 The tutorial shows you what to do using a dummy character like this.

Violence: As with any game in the fighting genre, the main objective is to do enough damage to your opponent until they’re health bar is gone. Despite the violent nature, Fantasy Strike has no blood, gore, or any disturbingly graphic content.

Spiritual Content: There is one character that uses a ghostly specter as an ally in his sparring.

Gambling: The panda fighter Lum is addicted to gambling and uses dice and a slot machine in his attacks.

It’s true—Fantasy Strike is indeed easy to pick up. But even though all characters have the same controls, the execution of moves is different for each fighter. For example, if I jump and press the button for Special, one character might do a double kick while another will toss a watermelon. With mechanics like these, it is easier for players to choose a main fighter, especially with how each character is so unique and has such personality in the way they fight.

I had forgotten most of what Fantasy Strike was, having last played it almost two years ago. The introductory tutorial was annoying and useless, serving only as fluff until I was able to access the main menu. I realized that it was better to practice with the character myself, sparring with an AI player instead of going through the tutorial. Skip it, if you can. Try out characters for yourself. 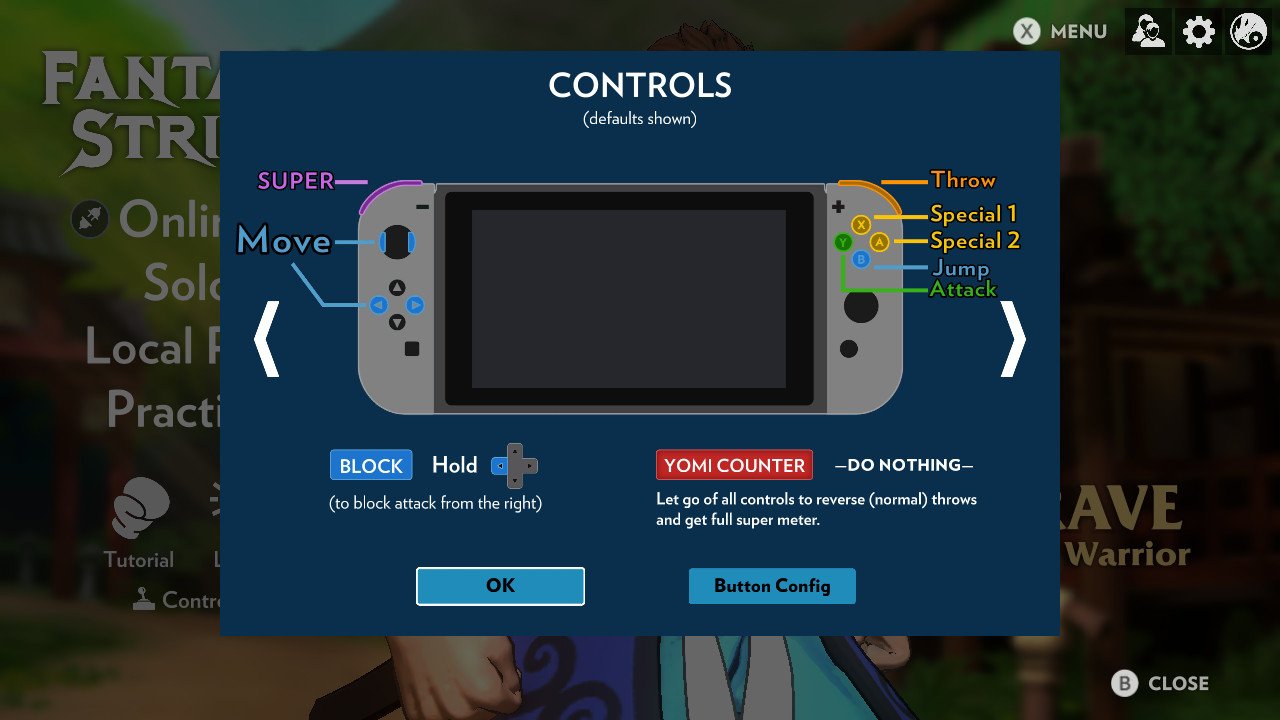 As you can see above, there is a general attack button, which is basically just a punch. There are iterations of this when moving and when blocking. But the real attacks are Special 1 and Special 2. These are typically kicks, strong punches that cannot be interrupted, or projectiles launched at your opponent. Each character is different, so it will take a good while figuring out every fighter’s style and finding one you enjoy, the concept of which I appreciate. 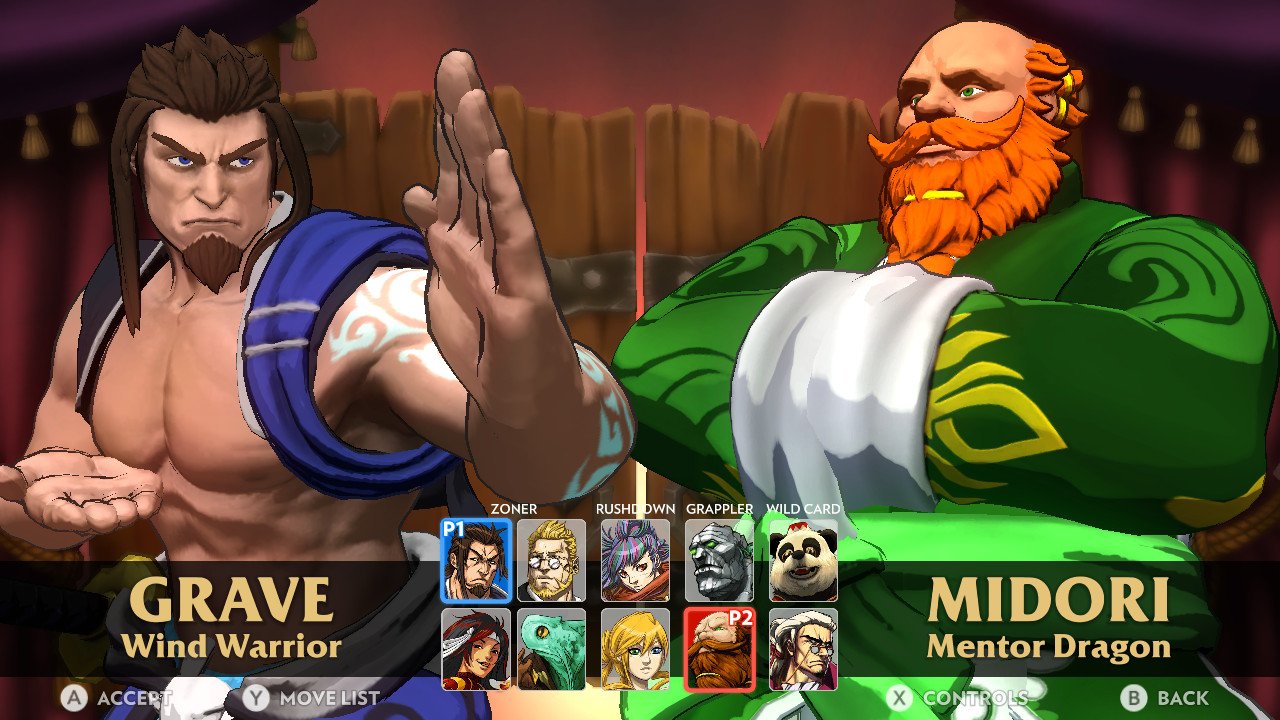 A Yomi counter can be done when not pressing any buttons, but will only counter throws. This mechanic works well to stop any player from doing infinite throws. Throws can be extremely annoying, especially when certain enemies deal double damage to you when they grab you.

Each character has two Super moves (one while standing idle and a different one accessed while jumping), which can only be activated once the Super bar is full. These typically deal two slots of damage to enemies, while some even do three. Some characters’ supers are useful for dealing damage, but others, like Geiger’s, are useful for escaping tight spots. 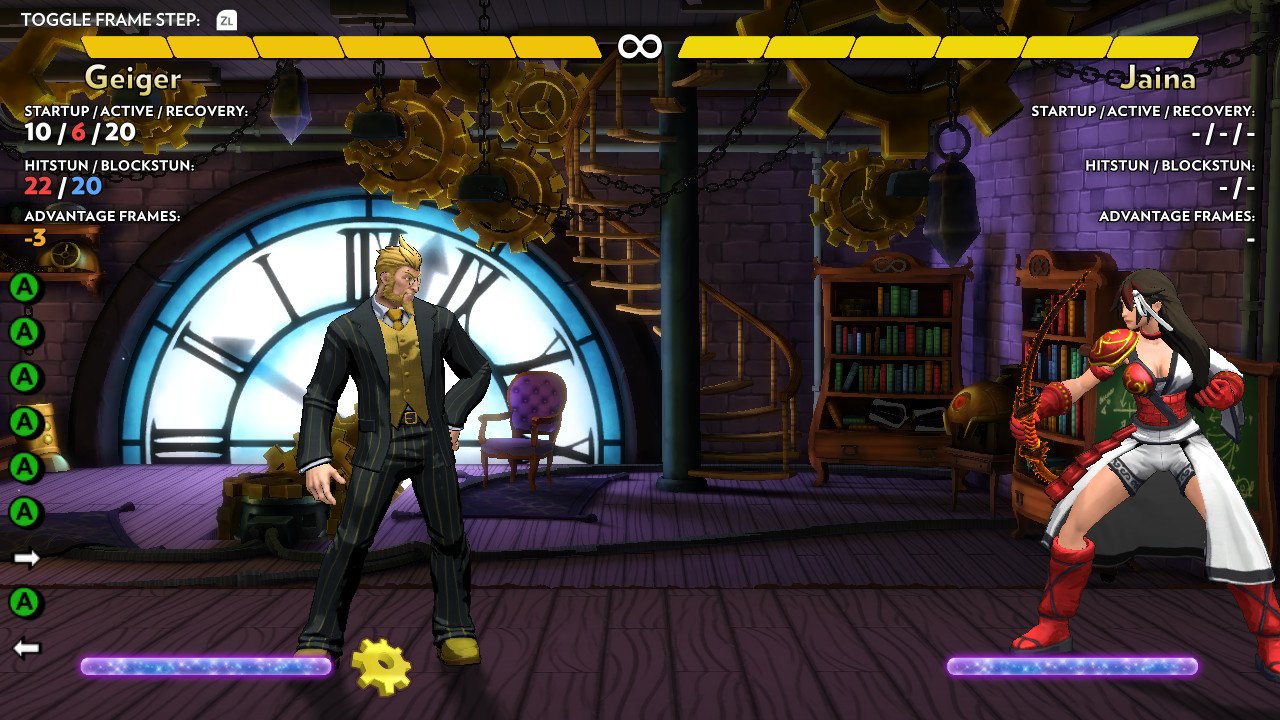 When I went hands-on with Fantasy Strike in 2017, the gambling Panda Lum and the fishy water-controlling warrior Argagarg were not available yet. After playing with these two, I cannot help but feel that they are a bit overpowered. Argagarg can have a temporary shield and has long reach with most of his attacks. Lum can toss plenty of projectiles, like dice and watermelons. Even though his Super depends on luck (he plays a slot machine and power-ups pop out), it will still usually be overly beneficial.

I enjoy fighting with a lot of the characters on the roster, but one of my favorites to play with is Geiger. He’s a clock-maker who uses gears as weapons. Some of his attacks are just plain silly and I wish the developers had made him a tad cooler. I enjoy using him because his projectile has lag time, slowly making its way across the screen, throwing opponents off in their timing to dodge the gear.

Another fighter I highly recommend is DeGrey, who uses a ghost to put his enemies in a headlock, leaving them temporarily vulnerable to attack. His punches are devastating and he has several attacks that are counters, much like the Fire Emblem characters have in Super Smash Bros Ultimate. Honestly, all of the fighters have some sort of fun quirk about them. Be sure to try them all out! 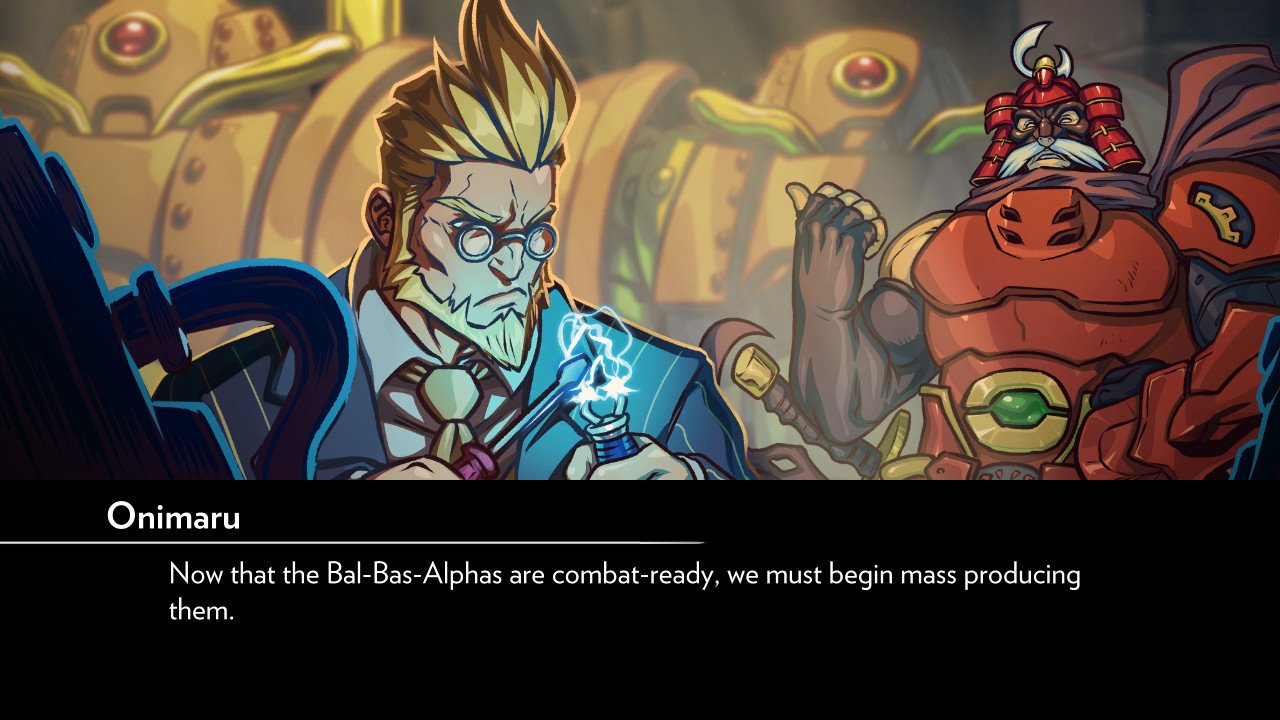 More Things to do

Since I first played in 2017, new modes have been added to solo play. When playing through Arcade mode, you’ll be able to see a few clips that will drop some hints at the origin of characters and why they’re fighting in the first place. But some of the stories are unclear and feel incomplete; pieced together. I wish that more thought and effort had been put into this part of the game, especially since the fighters are so interesting already. Give the characters some quality lore! 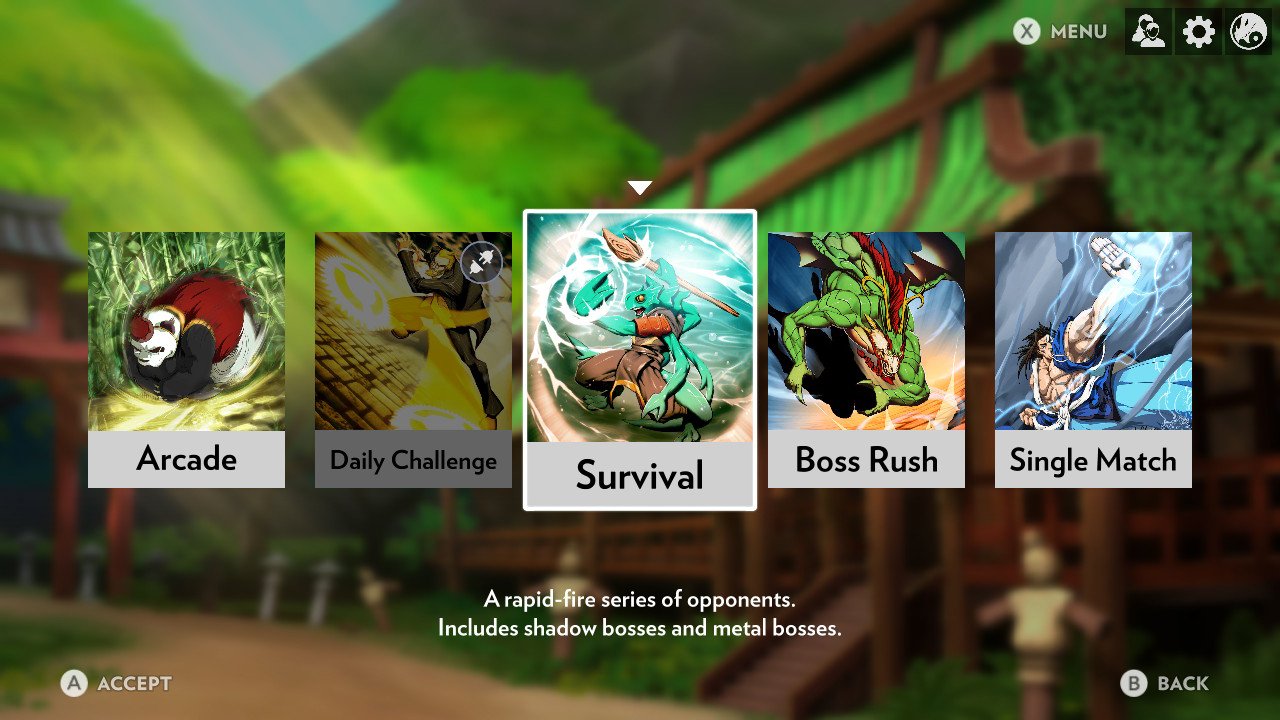 The online mode is functional, an improvement to be sure! But it still took me a while to find an opponent, probably due to the small player base right now. Once the game is officially released, more may join, but otherwise, there was no lag time when connected to the web and fighting was flawless.

Some other modes include a daily challenge mode, survival mode, boss rush mode, and single match mode. Daily challenge gives players online challenges to complete, like defeating an enemy within a time limit. Survival mode pins you against a constant barrage of enemies until you lose or defeat them all. Boss rush presents strong foes one after another, like survival mode. Single match is self-explanatory, which is a match against an AI. This mode is good for practice. 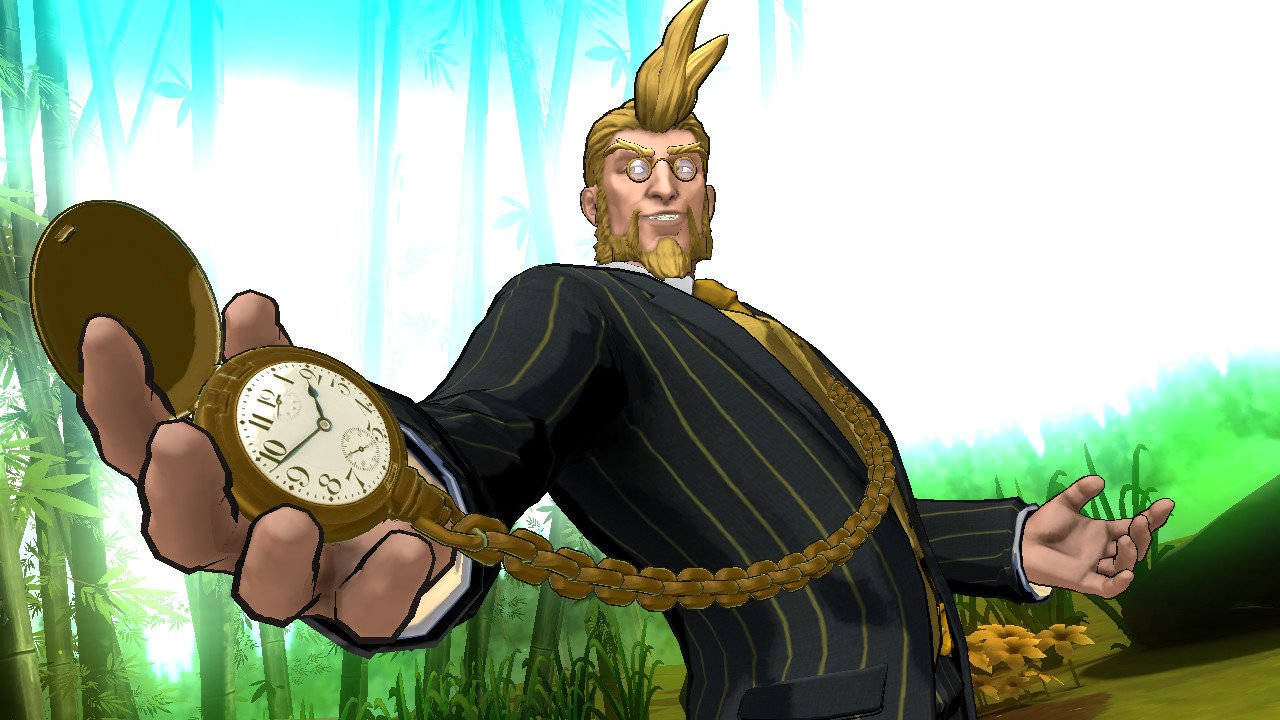 Graphics could have been better. It can be seen especially here.

The graphics are seemingly cel-shaded, similar to how they were two years ago, when I first tried Fantasy Strike out. I was honestly hoping for better graphics, especially since the developers updated their title graphic. But they still look the same: grainy, chalky, and lacking in detail. This is indeed an area they could have improved on.

Each character has a map especially themed for them. For example, Panda’s map is a casino, Geiger’s is a clock tower, and etc. The feel of this fighting game as a whole takes me back to the Naruto: Clash of Ninja games on the Nintendo GameCube. Those games were easy to play, but only if you tried to press the correct buttons. Like in those games, button-mashing in Fantasy Strike will get you no where. 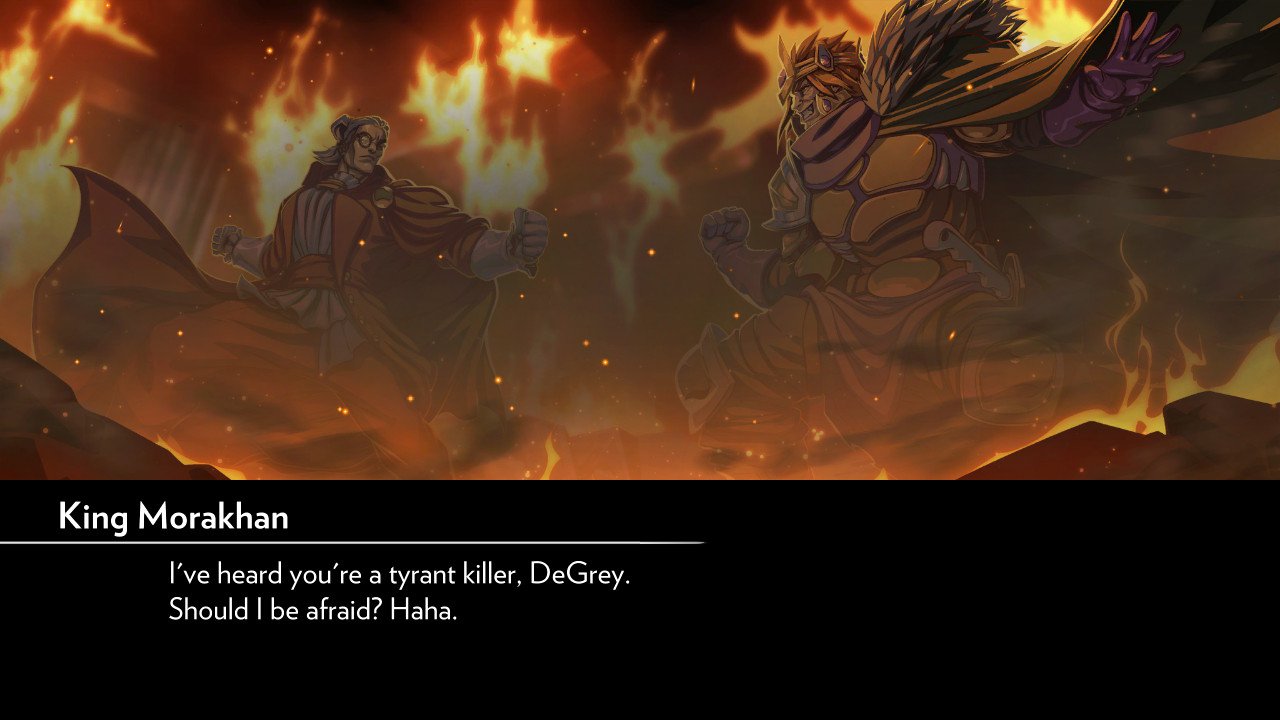 I have mixed feelings about Fantasy Strike. In its own rite, it’s a quality fighting game with unique characters and simple controls—two factors that, if executed well, can boost the quality. On the other hand, it’s improved little from when I first played it. Due to the fighting genre being so saturated already, whatever “new” material Fantasy Strike presents will fall by the wayside, doomed to be overlooked. Before, I gave this game a 9.3 out of 10 for its uniqueness. Due to little improvement, Fantasy Strike earns an 8. For the cheap price of $19.99, I would recommend this game to newcomers to the fighting genre. Veterans should pass this one up and play another fighting game that contains more complexity and testing of skill, like Tekken or Street Fighter.

Fantasy Strike succeeds in being a great game for beginners to the fighting game genre, but accomplishes little else.