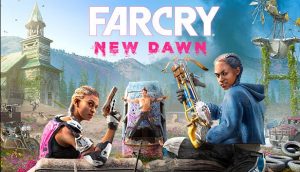 It would be fair to say that Far Cy 5 did not live up to expectations. While I did consider the 2018 title to be a great gameo, like most was expecting more oomph in terms of its treatise on religion, particularly Christianity. In stark contrast during its ad campaign for the stand-alone expansion, Far Cry New Dawn, Ubisoft downplays any proto-religiosity; instead, the developer looks to benefit from the current trend of prominently featuring POC in the forefront. Because the Far Cry franchise has grown into notoriety for the strong characterizations of its villains, I was eager to see how the Twins would be portrayed. Sadly, Ubisoft whiffed.

Well…at least the developers spelled it in the lowercase?

Because Far Cry: New Dawn is a direct stand-alone expansion to Far Cry 5, I recommend reading the Content Guide section of the latter for a more comprehensive overview of the material found in the former. In this section, I will address content unique to New Dawn. 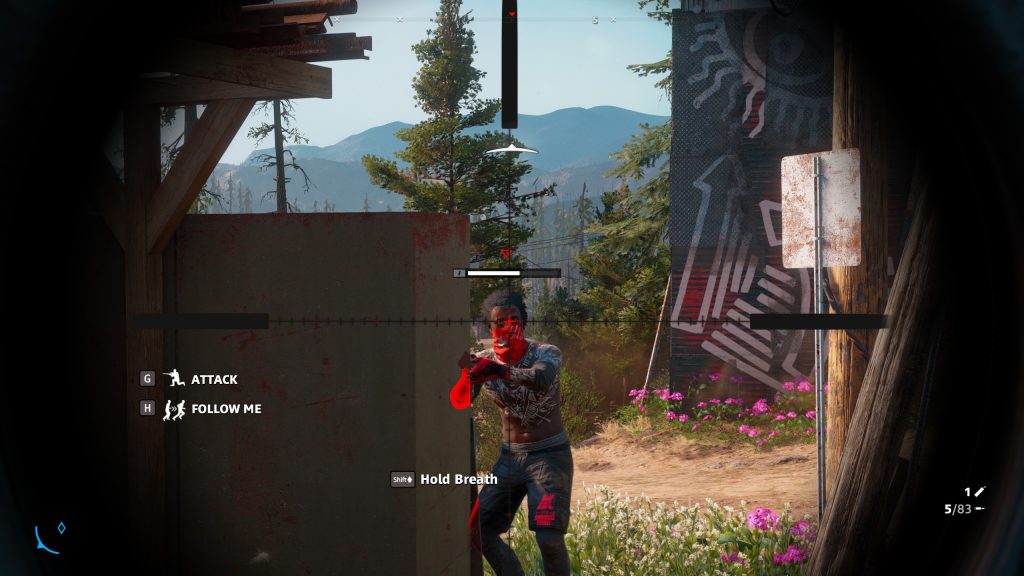 The featured antagonists are sadists, and are not afraid of crushing skulls with motorbike helmets, attaching C4 explosives to hostages, executing the helpless by shooting them in the back of the head, or burning down entire villages. They also derive pleasure from running fight clubs and vehicular death derbies. 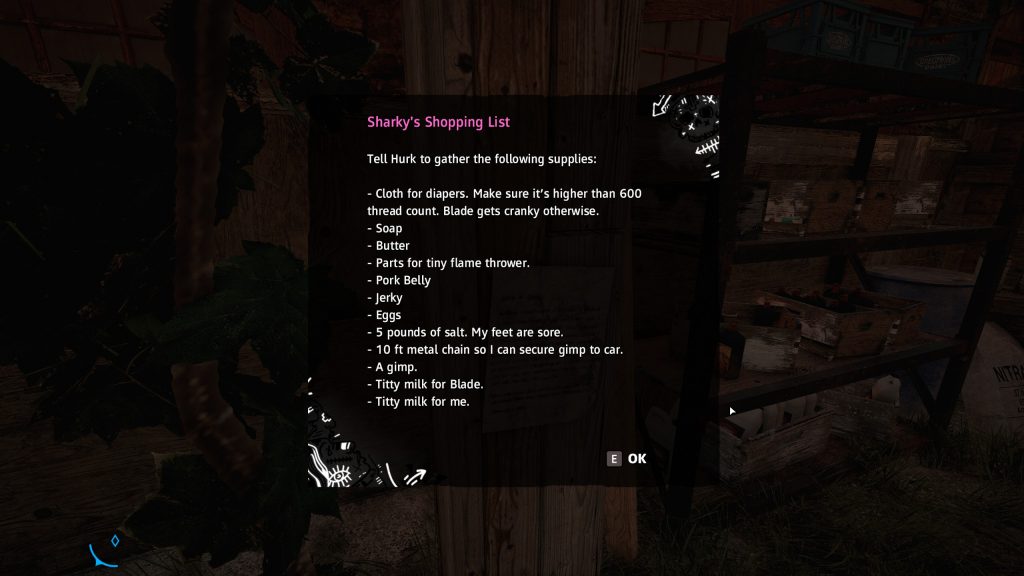 Though I never saw Jess Black, Far Cry 5‘s most prominent potty-mouth, the general population in New Dawn seems incapable of finishing a sentence without an f-bomb. The dialogue is neither funny nor clever—just vulgar, as though decorum and propriety were nuked off the face of the planet along with the old world.

Hurk Drubman Jr. and Sharky Boshaw reprise their roles as two crude dudes, offering commentary and plajokes about sexual preferences when nobody asked them for that kind of disclosure.

If my wife and me had not seen each other in six months, well, that is none of your business.

The people of Prosperity are remarkably asexual. Even after reuniting Nick Rye with his wife, Kim, there is no indication that they plan to make up for several months of lost time. Mysteriously, young children inhabit two specific communities; how did they get there?

One youthful minor NPC frequently asks, “what is an orgasm?” This running gag, of course, embarrasses nearby NPCs.

The Highwaymen play their music loudly; members of the resistance understandably state that this is annoying. Yet, upon further scrutiny, one realizes that the Highwaymen always play rap. After liberating a territory from them, more mellow genres play. There is no “good” version of rap in New Dawn, so it telegraphs that rap = bad, other genres = good is a dichotomy that I find highly problematic, particularly because the Highwaymen are led by two black women. I believe this, intentionally or not, sends a detrimental message about a race of people and their preference in music, as though the very genre itself serves to elicit negative responses by proxy. The lack of nuance in the characterization of the Twins beyond bloodthirsty brigands compounds my disappointment in the reading of this game. 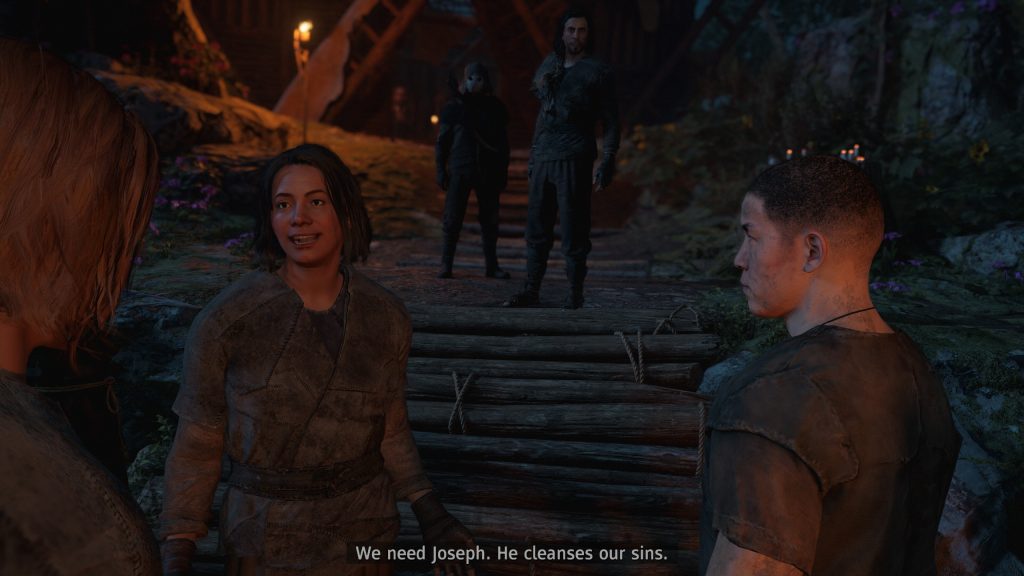 Hmmm…that’s the wrong name that begins with “J.”

Remember those lines that I wrote in my introduction to Far Cry 5, contextualizing the state of American Evangelism, and how the video game industry awaited with bated breath experience Ubisoft’s seemingly scathing commentary on Christianity? Instead, what we received was the low-stakes foundation of a modern-day cult. What was to be experienced in FC5 was bereft of any real-life application or intellectual engagement. The illusion of choice ending made a fun game forgettable, especially in the same year of a God of War or Marvel’s Spider-Man. 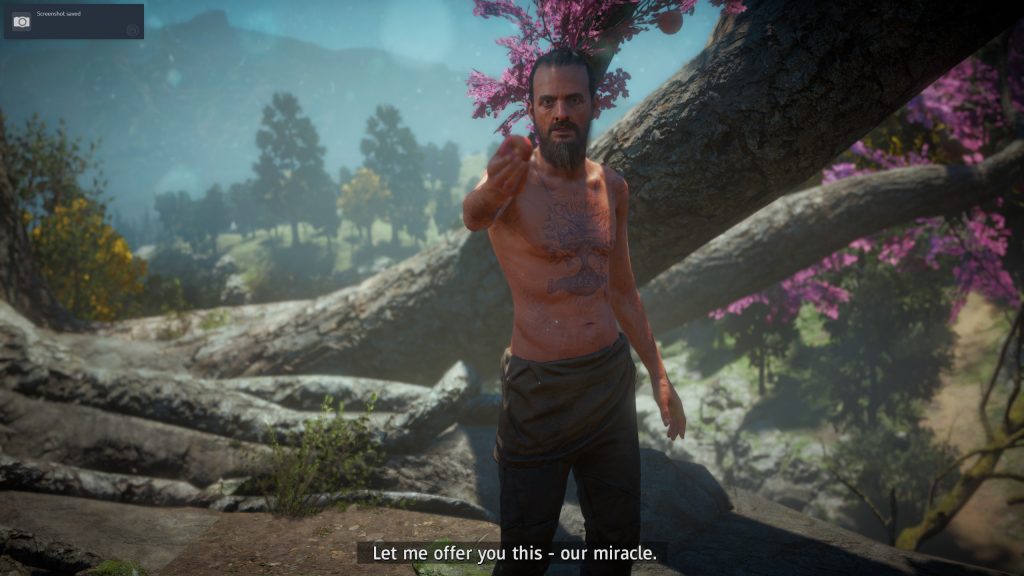 In Genesis, God forbade the fruit. Remember that Satan said it was permissible.

Now those who were looking forward to some good old-fashioned textbook blasphemy will find everything they wanted here. Joseph Seed has transcended beyond a Duck Dynasty archetype to a full-fledged White Jesus wannabe. After meditating in seclusion, he emerges to take on a disciple, bestow upon them the fruit to bless them with gifts so that they may perform supernatural feats. His frequent references to God and so-called prophetic visions do not bother me as much as his body language; as one might imagine how Juan Pablo Di Pace or Jim Caviezel portray Jesus in A.D. The Bible Continues and The Passion of The Christ, so too does Joseph Seed emulate the mannerisms of White Jesus found in those depictions. Even though I know they are fabricated, I still suffer from a disquiet when Joseph Seed appears on the screen. I am glad for it, because it is a reminder for me to kill that idol. 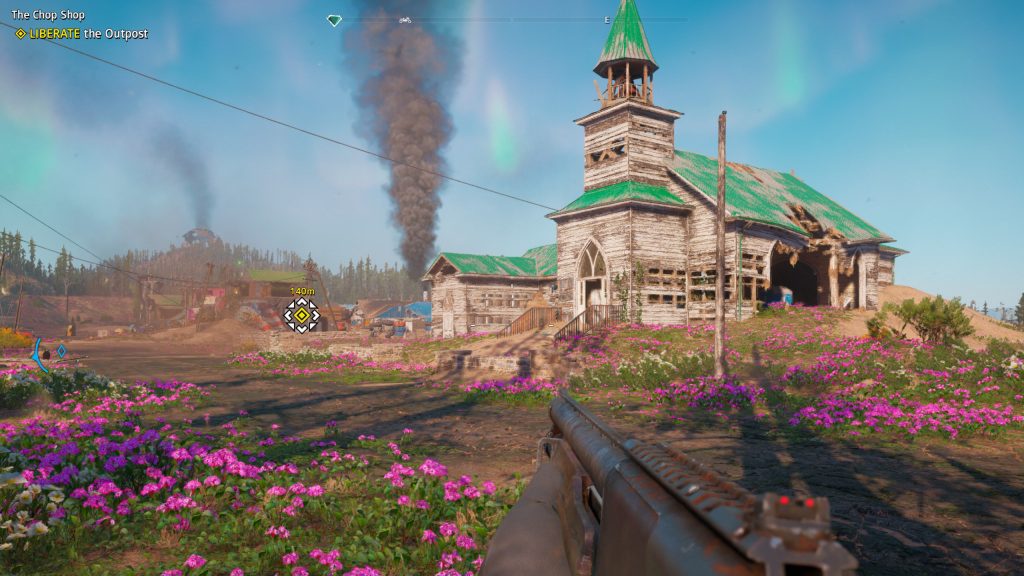 During the finale of Far Cry 5, players are given two choices: abandon the siege of Eden’s Gate or fight Joseph. After enduring all of the prior madness from John, Jacob, and Faith, I choose to walk away, and was “rewarded” with the ending showing Sheriff Whitehorse turn on the escape vehicle’s radio, which then plays “Only You,” the suggestive programming music during the Jacob Seed sections; the implication is that the player-character “Rook” will “activate” and kill Whitehorse and Deputies Hudson and Pratt. Doubling down on the illusion of choice, the official canonical ending is the “resist” ending that I declined the first time, consisting of the showdown with Joseph as he uses Bliss to indoctrinate Rook’s allies in an all-out firefight that could only happen in a video game. Those who chose this ending, of course, know that even in defeat, Joseph wins, as the nukes come a-tumbling down. 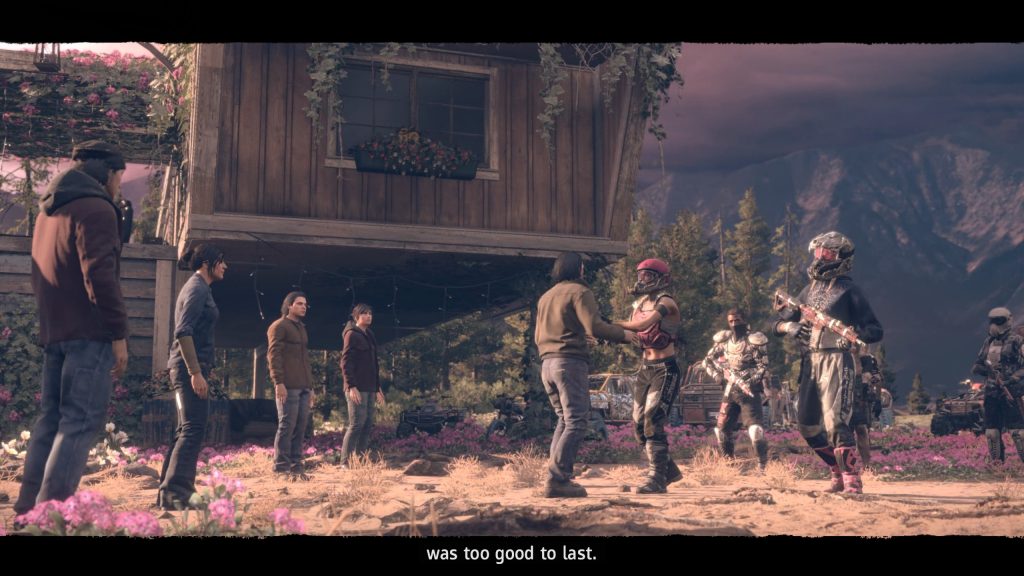 New Dawn takes place seventeen years later. Hope County survivors emerge from their nuclear shelters to discover not a Fallout wasteland, but a Horizon Zero Dawn regrowth. A man named Thomas Rush travels from the West Coast, helping others rebuild after the nuclear holocaust. However, a band of rogues calling themselves the Highwaymen, led by twins Mickey and Lou, intercept Rush’s train; they kill one member of the group, and abduct Rush while the player, the Captain, escapes. 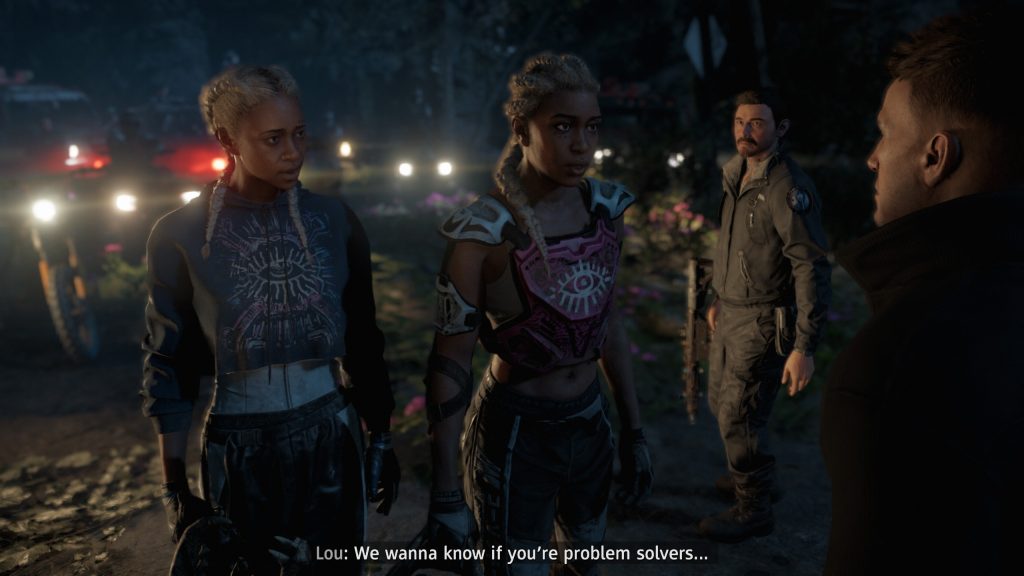 If any of this sounds familiar, that is because New Dawn‘s introduction is shamefully similar to that in Far Cry 5’s, right down to an NPC fishing the player-character out of water. I purchased New Dawn anticipating that like the stand-alone games accompanying the prior two mainline titles, Far Cry: Blood Dragon and Far Cry: Primal, this title would also provide a unique experience unlike anything found in the base game. To my disappointment, New Dawn is not only merely a derivative of Far Cry 5,  it is also a fairly reductive package: less acreage, less missions, less vehicles (no airplanes), and even less character models representing individuals who provide details for side missions—I swear the same black dude and white chick are the only two folks who know where the prepper stashes are! 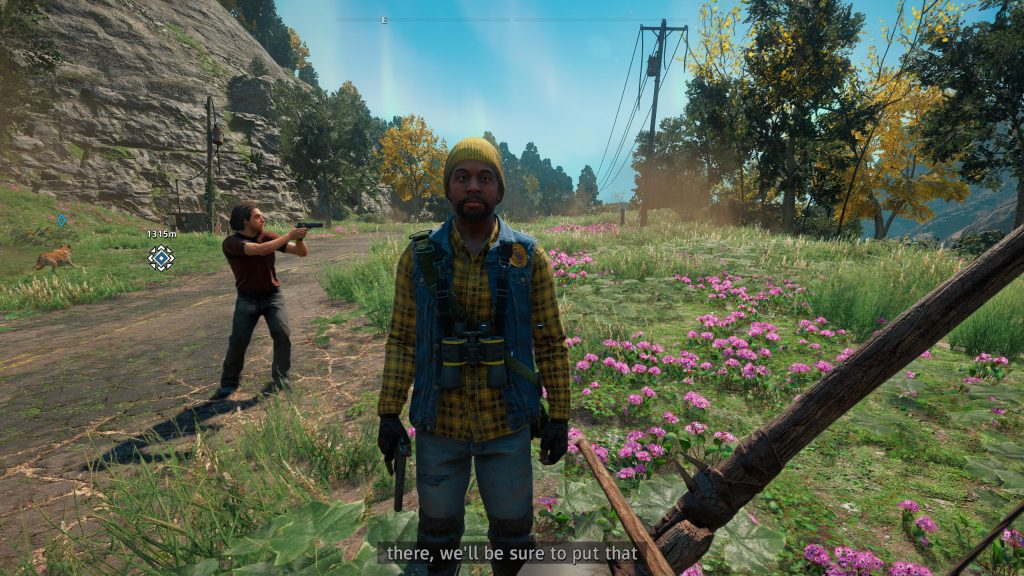 I’m driving around in vehicles, while this man is on foot, yet he beats me to every destination.

Indeed, though some of the characters have been shuffled, the number and type of Guns for Hire remains the same (did I mention no airplanes?). The perk point skill tree system is unchanged as well. Even the conquering territories is an all-too-familiar activity, though this time, capturing enemy territory grants resources such as ethanol, allowing players to upgrade Prosperity, John Seed’s old ranch now converted for more wholesome purposes. This upgrade system is new, and serves as the indicator for the progress that has been made in the game. Prosperity’s upgrades are divided into three tiers; as one upgrades Prosperity itself, not only does this unlock story missions to advance the game, but it also allows upgrades to different on-site shops for weapons, explosives, vehicles, maps, and medicine for healing. Besides retrieving ethanol and other rare materials, players will be required to find and recruit “specialists” who can run these shops—most of them old Far Cry 5 characters making cameos for fans who wonder what happened to them. Still, no sign of Jess. 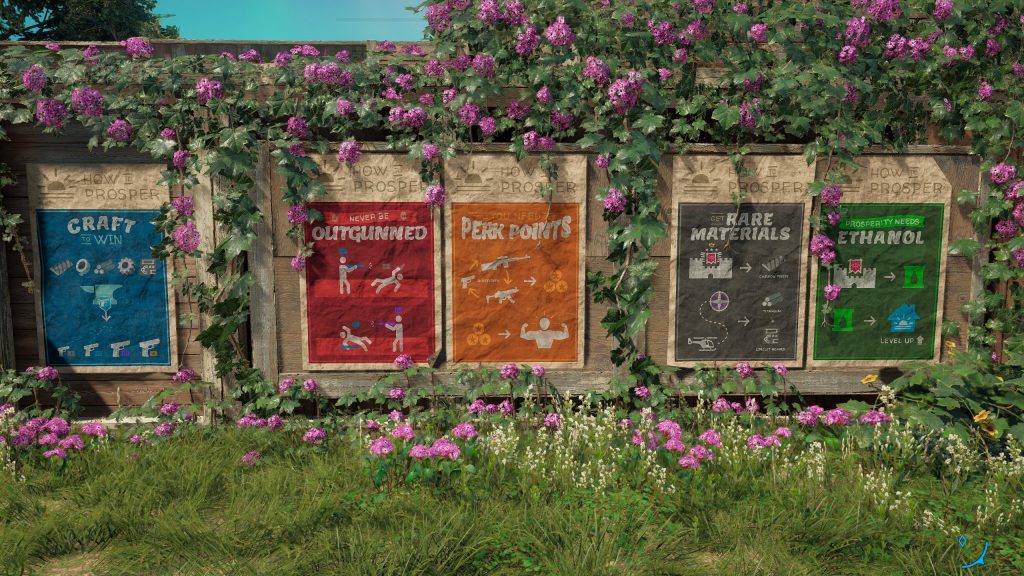 When single player games issue instructions like multiplayer-only games, I should reconsider my gaming choices.

Acquiring materials to upgrade and unlock…well, everything…is New Dawn‘s primary gameplay loop. Not even the vibrant colors of nuclear animals and abandoned vehicles and structures can alleviate it from feeling routine. Given the introduction of looter shooter-like level systems with weapons and enemies, I feel as though Ubisoft knew that New Dawn was lacking in substance, so the game has been inflated with “busy work.” 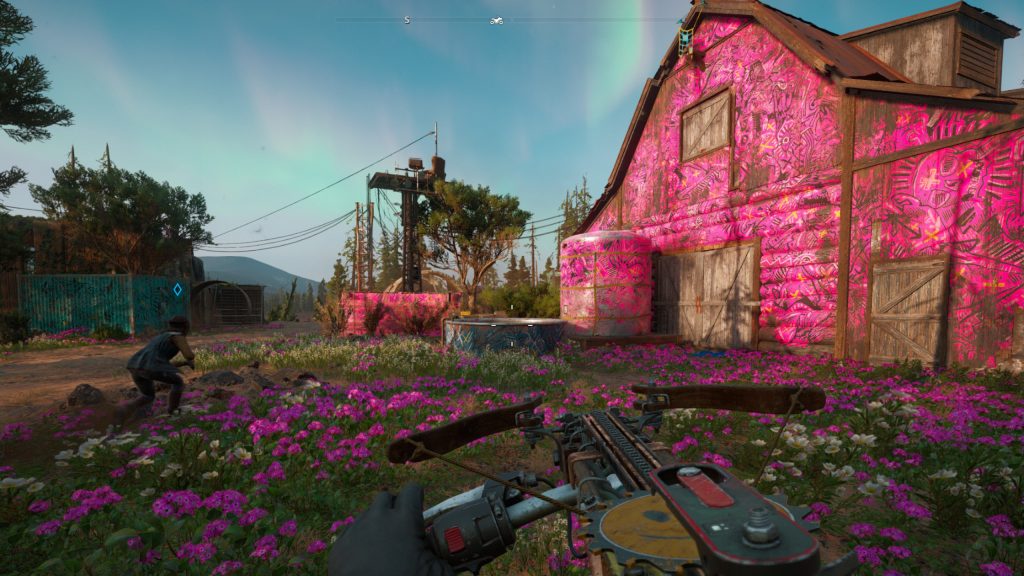 The most disappointing aspect of New Dawn is how it handles the twins, Mickey and Lou. After establishing a line of beguiling villains, I believe it fair to expect some high-stakes intrigue. The twins offer none of this, and are essentially female versions of Trevor from GTAV. Every heinous act that they commit seems to serve the purpose of exceeding one of their previous transgressions. Barbarous, fiendish, abominable—the twins lack any kind of depth that one should expect from modern villains. Considering the gaming industry’s appraisal for diversity in Apex Legends (and Fortnite not wanting to pull a PUBG by ignoring modern trends) Ubisoft might have been prescient by featuring black women on their box art, but it appears to me that any semblance of opportunity here has been squandered, leaving in the wake of failure an awkwardly lingering sensation of tokenism. 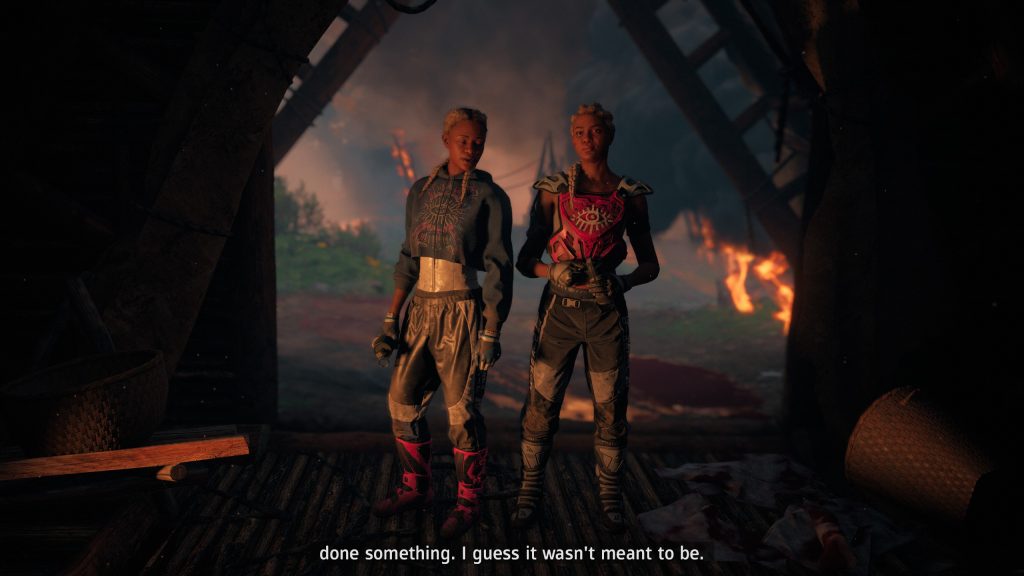 Joseph Seed’s involvement, however, is precisely the kind of characterization worth the price of admission. It is through his…seed…that this chapter of the Far Cry saga will come to a close in a blaze of glory. I appreciate how New Dawn picks up where it left off with him, but Ubisoft makes a critical writing mistake with him. Despite his miraculous premonitions, his exceedingly nepotistic perspective undermines the wisdom he has exhibited through two games.

While players will eventually gain abilities that may remind them of Crysis, New Dawn lacks enough “new” to keep my attention. The poor implementation of the Twins is the game’s greatest disappointment, while Joseph Seed’s involvement gives me the impression that Ubisoft had notes concerning the better parts of his personality, but could not fit them into the previous game, and inserted them here. But because Joseph Seed is “old news,” the Twins were deployed while bereft of complexity. What is left of New Dawn then, is an average sandbox-y FPS whose AAA polish barely elevates it beyond mediocrity. I warned in my review of Far Cry 5 that Ubisoft’s FPS formula is becoming stale; New Dawn is none the fresher.

Far Cry: New Dawn is an AAA game that reeks of being developed to satiate the whims of shareholders. Outside of concluding the Joseph Seed saga, I struggle to find reasons to play more Far Cry.