Review – Fire Emblem: Shadow Dragon and the Blade of Light

Not Your Child's Fire Emblem

If you were to read the phrase “Fire Emblem” ten years ago, there’s a pretty decent probability you wouldn’t have known what I was writing about. Although somewhat popularized by the Super Smash Bros games and community, Fire Emblem really didn’t hit its stride in the U.S until the release of Fire Emblem Awakening in 2013. Of course, it wasn’t the first title to come to the states, but it seems that over the course of this past decade, the Big N has officially, finally, found a receptive audience here in America. Fire Emblem: Shadow Dragon and the Blade of Light, henceforth FESDBL, is a relic from the time before Fire Emblem games were released outside Japan, all the way back on the Famicom in 1990. Thankfully, regardless of our absence in the initial audience, Nintendo has allowed Americans to participate in Fire Emblem’s 30th anniversary by releasing FESDBL in its original form on the Switch Virtual Console, with minor enhancements. Were we missing out on a treasure, or was Nintendo right in their choice to wait for a while? Let’s find out in our Fire Emblem: Shadow Dragon and the Blade of Light Review!

Magic/Sorcery: Magic has big roles in this fantasy world; Marth’s army has several mages and sorcerer units, as do most opposing units.

Language: Occasionally, the expletives “H*ll” and “D*mn” are used in dialogue boxes.

Once Upon A Time, There Was A Prince… 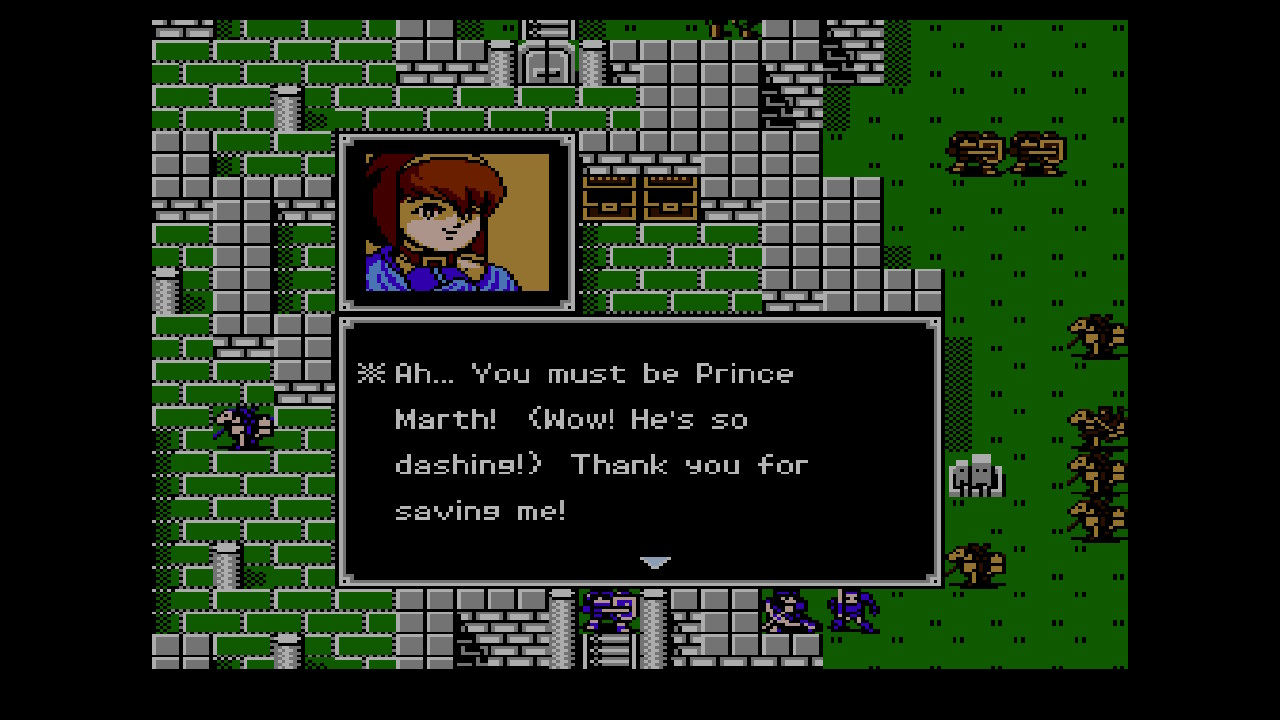 FESDBL’s story revolves around Prince Marth in his conquest to reclaim his kingdom from the clutches of the evil sorcerer Gharnef and his armies. I’ll be honest, if you want to follow the story in FESDBL, you may want to play the DS remake rather than the Famicom original. If you, like me, have not played the DS remake, I recommend writing down the chapter summaries in a notebook, as it is difficult to keep track of the story throughout the chapters in the Famicom version. Prior to selecting and deploying units, a few screens of dialogue are narrated/exchanged between characters, and that’s it. This was before there were cutscenes or anything of that sort, and you’re just kind of expected to keep up with the story from chapter to chapter. That’s not including the chapters which are entirely dedicated to distractions from the story. I suppose with its anime artstyle and setting, it’s only fitting that FESDBL has chapters of filler.

Back In My Day…

The gameplay of FESDBL displays the basic formula that proved to be successful for the rest of the series. The player chooses what units to take into battle and has to use strategy in order to defeat the opposing units. Permadeath ensures that if one of your characters dies, they’re gone for the playthrough, with a few exceptions. Normally with games like this I go for a “perfect” playthrough by recruiting everyone I can and losing no one. However, there are so many character recruits that I started to question my sanity in this policy, especially seeing as many of them never participated in a single battle. By the last chapter, I had 48 different characters/units in my army, but was only allowed to bring 14 units or so in each battle. 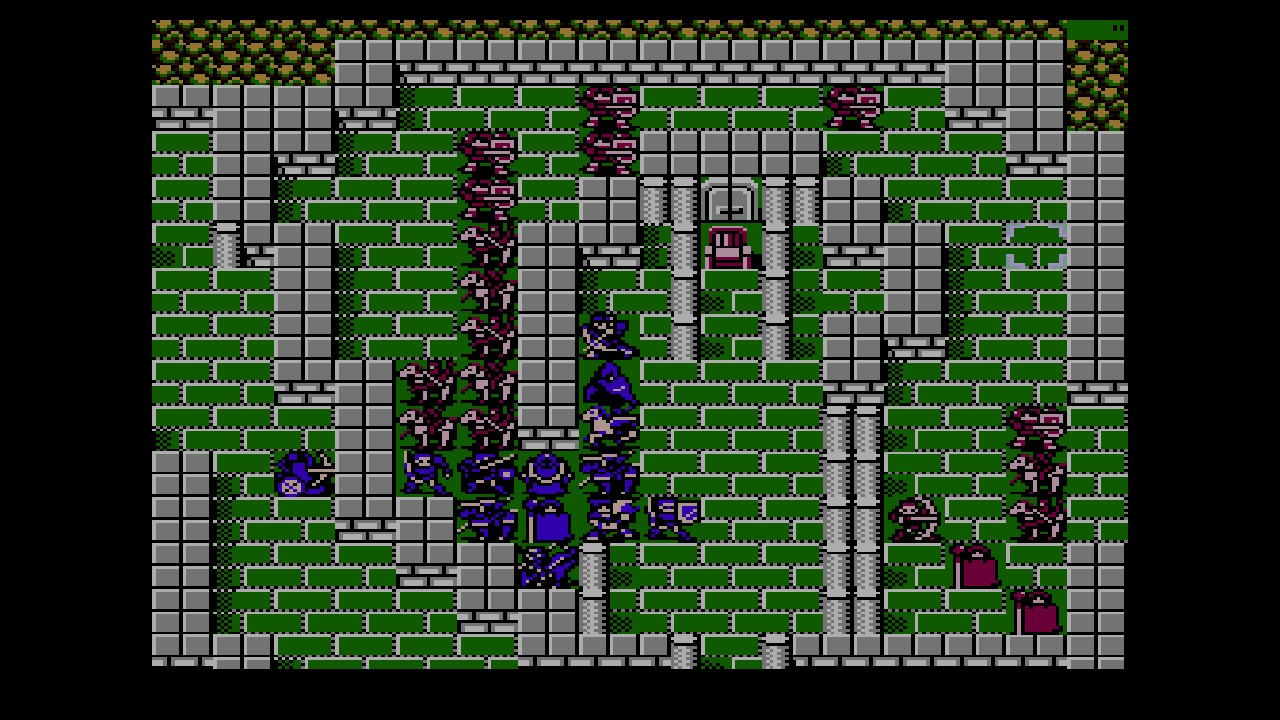 While FESDBL shows where the gameplay of Fire Emblem comes from, it also clearly shows how much the formula has been improved over the years. FESDBL lacks many quality-of-life changes present in later games. Terrain stats aren’t displayed until attacking someone. Enemy stats, such as projected post-fight HP, aren’t visible. If you want to know what an enemy’s attack range is, you have to manually look into their stats list and calculate how far they can move on the grid. These things, among others, are quite irksome by modern standards, and were correctly fixed in future titles. Regardless of these “characteristics” kept in the original port, the re-release on the Switch did, thankfully, come with some additional virtual settings. There are a few different fast-forward settings, turn rewinds, and a quicksaving feature which actually improves the experience. This game was impressive for the era it comes from, but it would be nigh unplayable by modern standards without these additions.

Just be warned that your game saves can be messed up—even lost—if the quick save feature is used carelessly, and that the fast-forward option speeds up audio as well, which makes already-annoying music maddening.

Another notable trait of FESDBL is it’s difficulty. FESDBL is hard. Looking back, I don’t remember Fire Emblem games being easy, but FESDBL is on a different tier of difficulty. Due to an RNG system I believe to be a bit simpler and harsher than later titles, hits often miss, even when stats are equal and units are leveled. Additionally, when units are fast enough to attack twice per encounter, they only land the second hit about half the times they should. This, in addition to opponents hitting pretty hard, makes for a healthy challenge to strategize around. 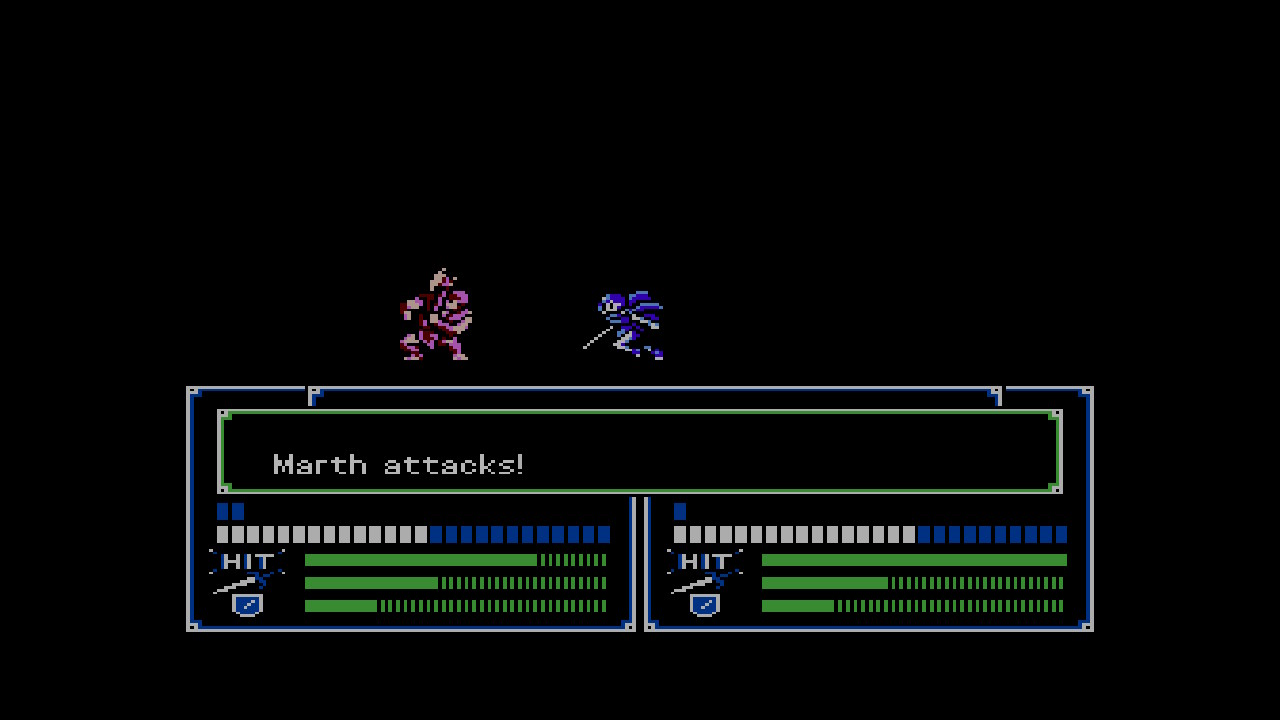 If you ever wondered why Marth sprints funny in the Smash games, it’s because he does in his original game, too.

Personally, I like my units being able to one-shot opponents by having them land both hits in an encounter, thus minimizing a lot of potential damage. However, in FESDBL, it requires a much higher level in order to get that physically strong, and even then it’s never guaranteed. To top it all off, the only way to level a unit ahead of other units is via coliseums, which scale in difficulty the more they are used. I was able to milk this system to grind Marth to high levels early, but that only made a real difference for a few chapters. I eventually had to give up on trying to level up some weaker units, like Pegasus Knights, because they were just too hard to level up for the amount of payoff given.

And We Were GRATEFUL

Playing through FESDBL, I couldn’t help but think about the differences between it and the later titles in the series. With all of the faults that the original game had, it also has a sense of simplicity that I miss in more modern Fire Emblem titles. There was no “support” system for me to worry about missing story, no advanced unit mechanics such as carrying/supporting units, and no side objectives to strategize around (besides recruitment, of course). There certainly wasn’t any of the slice-of-life pseudo-D&D stuff that began in Three Houses. The gameplay is dedicated solely to keeping one unit alive whilst taking out another. And I am grateful for it. 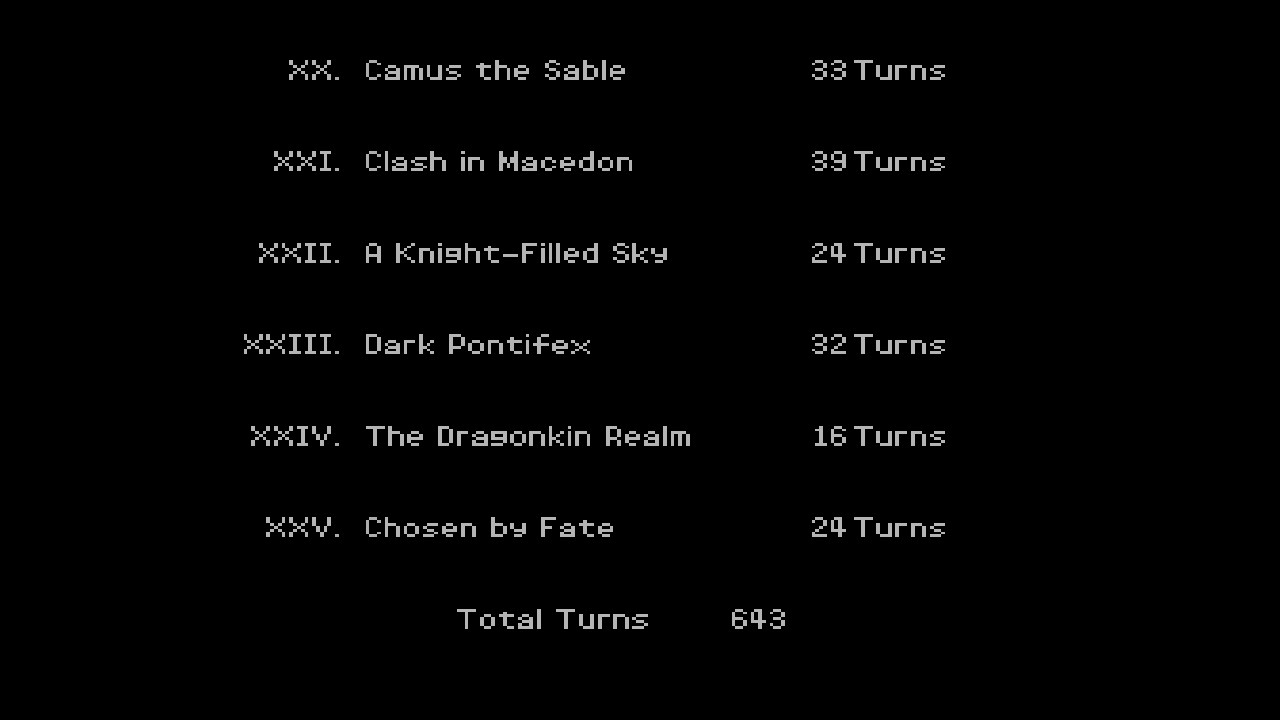 When I began this game, I didn’t think I would have a long task before me. I figured it would take maybe 20 hours or so in length, and be done within a few weeks, if not days. After all, I can play through other Famicom classics in a similar timeframe. I was wrong. Slowly but surely the days and the chapters went by, and with so little story to go off of, it seemed at times that the constant battle would never end. I had the music muted so I could have fast forward active at all times, and frequently used the turn rewind mechanics for each death I mistakenly allowed. It wasn’t fun anymore; it was a chore. I love the Fire Emblem series and its stories, but I don’t foresee myself ever playing this Famicom original again.

Overall, I ended up beating FESDBL with over 60 hours in the game, across a whopping 643 turns taken. And that’s not including all of the re-dos and restarts I had performed. I repeat, I’m not doing it again. This game holds a lot of value in showing how far the series has come, but unless you are specifically looking for this nostalgia lesson, I recommend you pass up this title. Or at least, play the DS remake instead. It’s got to be better than this was.

Although it earns points for its significance for the Fire Emblem series and the Strategy genre as a whole, this game is archaic and barely playable by today’s gaming standards.