Much Greater than the sum of its parts 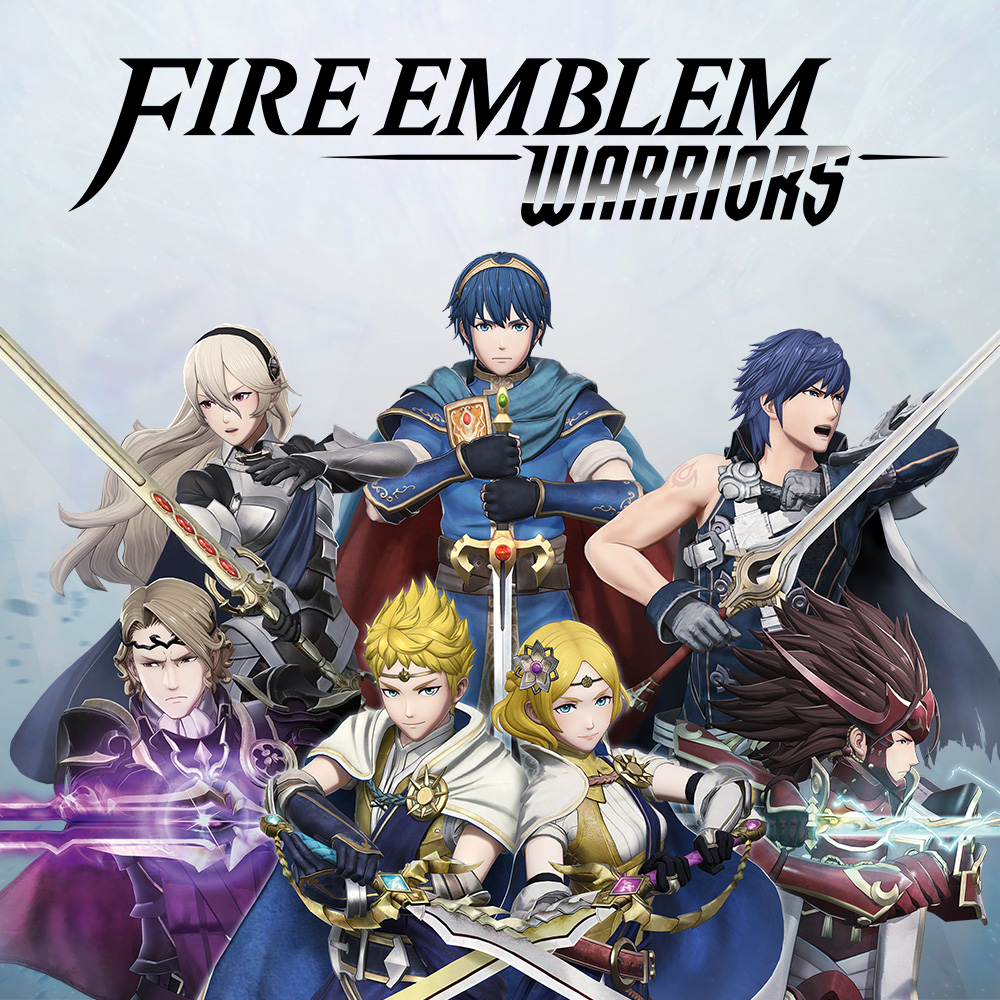 Fire Emblem Warriors joins Hyrule Warriors in the category of Nintendo-themed Dynasty Warriors games. I personally enjoyed Hyrule Warriors quite a bit despite not actually being a huge Zelda fan. When Fire Emblem Warriors was announced, it seemed like a perfect match for me because I do enjoy Fire Emblem (Path of Radiance is one of my all time favorite games). The game ends up really only borrowing from three titles from the series though, none of which I was all that enthused about. Despite that, this game was really hard for me to put down.

Spiritual Content: Magic is used. Divine dragons are present in the story. Players can receive blessings by offering items at a temple.

Violence: The game revolves around taking over battlefields. Using a variety of different weapons, players will take down hundreds, if not thousands, of foot soldiers. None of this is graphic however.

Sexual Themes: One woman wears low cut outfit that draws attention to her cleavage. She also makes some implicitly sexual comments as does one other male character.

Positive Themes: The story is a fairly traditional good vs evil storyline with the good guys using the power of friendship and perseverance to overcome their obstacles. 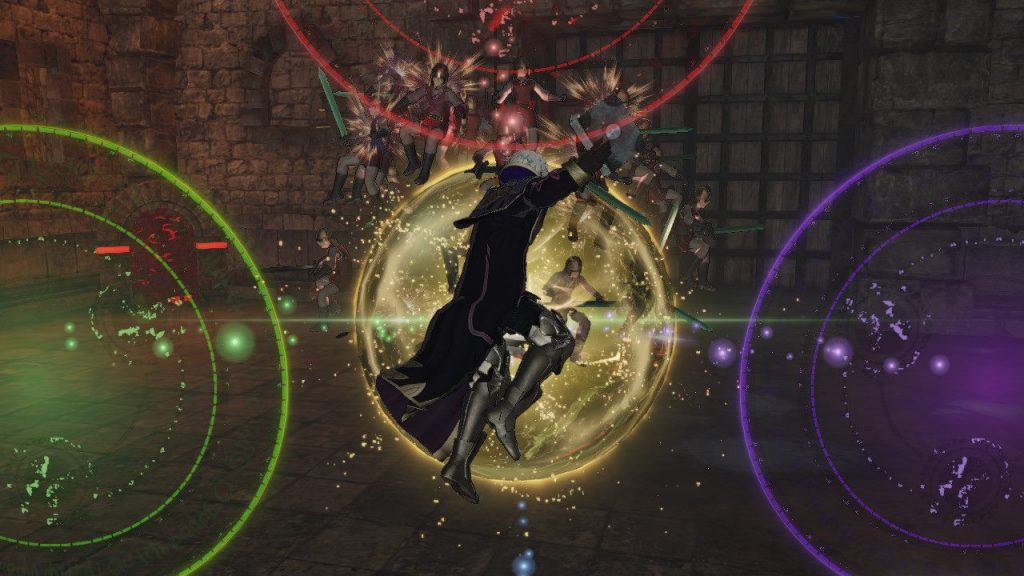 Fire Emblem Warriors’ story is pretty basic. It revolves around twins Rowan and Lianna who are both original characters. When their kingdom is attacked, they have to go and recruit allies to fight back. This is a very traditional Fire Emblem story. Despite its simplicity however, it stays on target. While there are matters that sidetrack the twins, their overall goal really does not change. One of my biggest grievances with some of the more recent mainline Fire Emblem entries, is how wars will only last half of the game before the story abruptly shifts to something else. It’s frankly a little absurd that this spinoff seems to know how to structure a Fire Emblem story better than the games it draws from. Regardless, the story really just serves to drive the gameplay. It’s not really going to evoke an emotional response. It’s just completely perfunctory. Some of the story occurrences also seem to come a little of left field, like they’re just catalysts to drive the gameplay, which is unfortunate, but I never really got the sense the game was trying to be as in depth as something like Path of Radiance. The main appeal of the story for most players will be that it draws characters from Shadow Dragon, Fates, and Awakening. Of those three, Awakening is really the only one I’d say I enjoyed. I found some of the other characters growing on me as the game went on though.

It’s the gameplay department where Fire Emblem Warriors really shines. Missions consist of selecting units to deploy who you can then actively control to take control of various key positions on the battlefield while defending your own positions in extremely satisfying hack’n’slash gameplay. When you start a mission, you are able to select which characters you wish to have direct control over, and which you want to act as more of a support system. Once the battle starts, you’ll be given various objectives, which tend to involve taking out key enemy targets or capturing key areas. You can pause the game and direct units to certain locations to accomplish these tasks, though it is often more efficient to just do it yourself.

Combat relies on combos using light and heavy attacks. These can be mixed and matched in fairly unique ways to create some devastating moves with extremely flashy animations. Fire Emblem‘s weapon triangle system is also put into effect, so you will fare better if you’re fighting against someone who is weak to your weapon. They will stun easier, take more damage, and you’ll build up a meter that lets you enter a powered up state and unleash a kind of super move. Consequently, if you are against someone who is using a weapon that is strong against yours, you will not build up the meter, it will be much more difficult to stun them, and you will do decreased damage. Just defeating standard enemies will also get you access to a different super move that is not only visually gratifying, but will also clear large amounts of units from the battlefield. One of the greatest strengths of this game is that it makes you feel powerful. Effortlessly taking down entire armies is extremely satisfying. 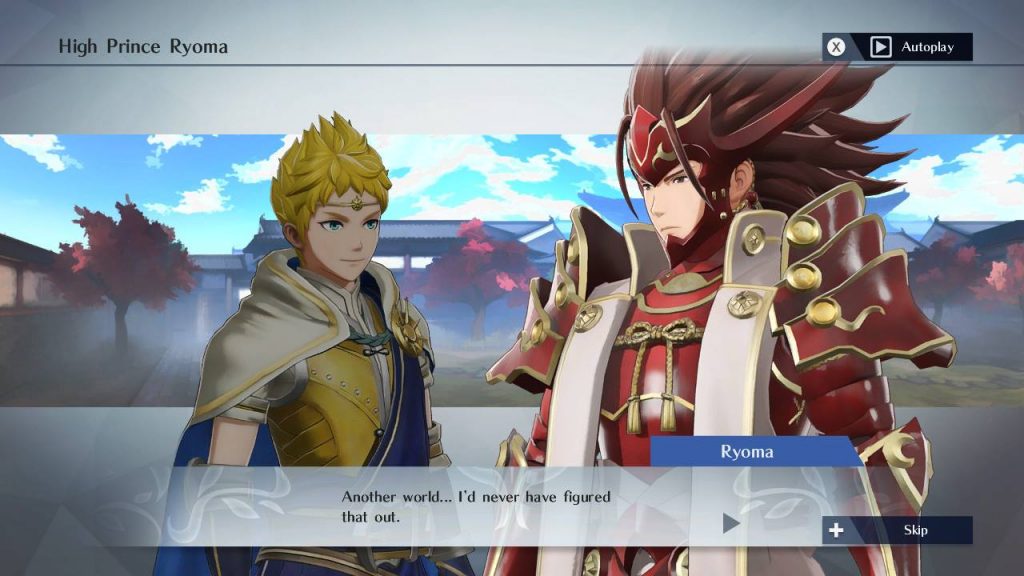 The character selection in preparation for a battle and the weapon triangle system are not the only things that the game takes from its main series titles. The class change system also makes an appearance, though admittedly promoting a character to a new class really doesn’t make them feel too much different. They get a new costume, some stat boosts, and the ability to learn some new combos. The latter feature is really the only thing that makes the character feel more powerful than before…assuming you have the materials necessary to teach them the new combos. Overall, the class change system is a nice nod to the main series, but it ultimately doesn’t do anything earth shattering. The weapon progression (bronze to iron to steel to silver) also returns and works more effectively, though the system is oddly applied to all weapon types including magic tomes – why there are bronze and silver magic books is beyond me. Characters can also pair up together and grow in support level. Having a support character allows you to perform follow up attacks and guards.The follow up attacks allow you to stun enemies with more ease. If both paired up characters have their meters filled, then you can unleash a devastating attack that does significant damage in a large radius. These are also very impressively animated. If you choose to include it, the unit permadeath also returns…sort of. If you elect to have the feature enabled, then any time a unit dies, they stay dead until you revive them. In that sense it is different from the main series because you actually can revive them, but again, it’s a nice nod to the main series.

There are a few things that bring the gameplay down a notch though. For one, you are constantly inundated with notifications. There are several sub-missions that you can choose to complete and information about those coupled with the state of your and the enemy’s forces means there are messages popping up on screen constantly. Sometimes you actually have to wait for the game to go through several different notifications before it recognizes that you’ve completed an objective and can move on. I also highly recommend turning off the level-up notification or you will be constantly pausing mid battle to see your troops’ stats level-up.

While the RPG elements are appreciated for the most part, there are some that just aren’t worth exploring. Some weapons have special attributes that can be applied to other weapons if you first destroy the weapon with the desired attributes, and honestly it’s not worth it. On the normal difficulty the game presents very little challenge. You don’t need to micromanage as much as the game allows you to. It’s a feature if you want to explore it (perhaps for a higher difficulty), but it just got in the way for me. The same applies to the blessings you can receive if you sacrifice a set amount of items. 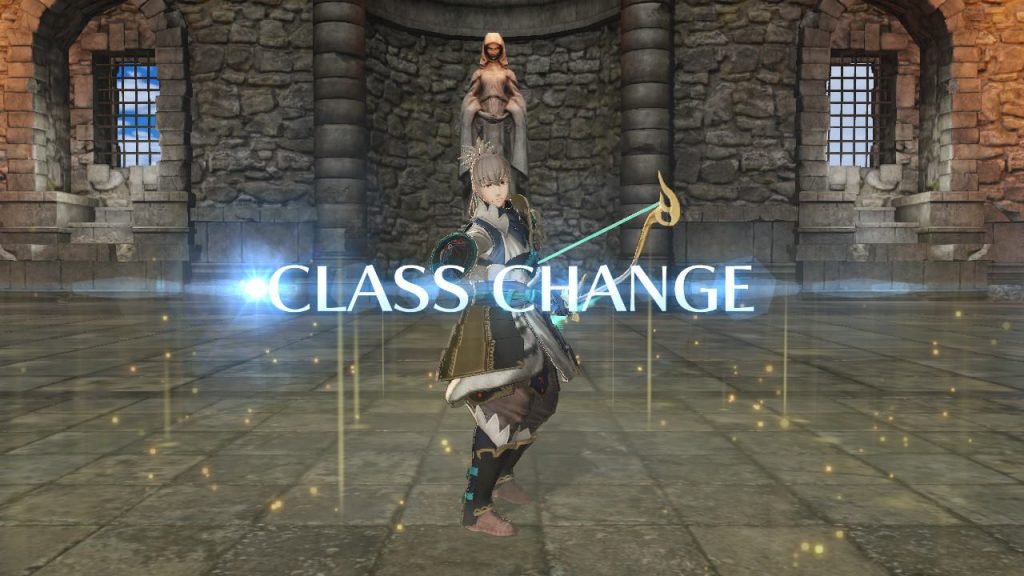 The game also has History Mode, which is just a bunch of non-canon side missions that are meant to retell chapters from main series games. Honestly, it doesn’t make a whole lot of sense, but it’s a good time sink that allows you to unlock new features. However, it also ends up revealing how dumb the AI actually is with one of its modes called Shadow Elimination. During Shadow Elimination, you must defeat a boss character who has allies summoning copies of said boss. You must defend your base, take out the summoners, take out the copies, and take out the boss. The copies are very hard to kill until you take out the summoners and the other enemies supporting the shadows. You can really only take out these enemies via directly controlling a character. Commanding your troops is fairly ineffective. But while you’re doing that, the nearly invincible shadows will head straight to your base, which your troops will be too stupid to defend properly. Maybe this is where you should use the two player co-op available in the the game because you basically need to be in two places at once. You can switch between characters at the base and characters taking out the summoners, but whichever one you aren’t controlling will just be piddling around doing nothing. You’ll also be getting a thousand notifications about how the summoners are summoning shadows, how all your units are dying, and how your base is about to be taken over. It’s literally every nitpick I have about the game all rolled into one terribly annoying side mission…and I had to play three of these missions in a row to unlock a specific character. It was exhausting.

As I touched on earlier, the combat is flashy and satisfying. This applies to the overall presentation as well. There are several CGI cutscenes that help make the story feel much more weighty. Significantly, this is also one of the few Nintendo games to feature complete voice acting. I was honestly surprised by how many voices I recognized from other games. There’s a lot of familiar and noteworthy actors in this game, from Yuri Lowenthal (Yosuke from Persona 4, the male protagonist of Sunset Overdrive) to Cherami Leigh (Lucy from Fairy Tail, Makoto from Persona 5) to many others. It’s all very well done. Literally the only complaint I have about the presentation is that sometimes the camera can kind of obscure some of the animations during combat.

Despite having a lot of small problems that can very easily compound, and not making use of the a lot of the main series’ games, Fire Emblem Warriors is one of my favorite games of the year. Thanks to very satisfying combat, a well acted, consistent story, great animations and presentation, I found myself constantly wanting to just play one more level.

Fire Emblem Warriors uses some of the least interesting characters in the series and somehow creates some of the most fun I've had all year.