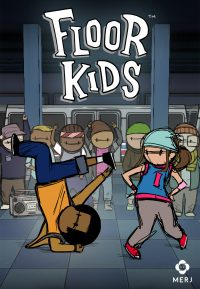 Floor Kids is a video game exclusive to the Nintendo Switch from animator Johnathan Ng A.K.A. “JonJon,” DJ/producer Kid Koala, and MERJ Media. JonJon is best known for his short film titled Requiem for Romance, but has done freelance work on various Hollywood productions such as The Spiderwick Chronicles, The Mummy: Tomb of the Dragon Emperor, and The Little Prince.

Kid Koala is a DJ and music producer that has quite a portfolio of albums along with plenty of tracks featured in music and movies. He did some music for The Behemoth on their game BattleBlock Theater. His work in Hollywood consists of music featured in titles such as Looper, Blade II, and Shaun of the Dead. His most recent work on film was in Baby Driver—one of my favorite films of 2017.

The reason for the collaboration of these two artists is that Floor Kids was actually a popular short film that the two had worked on back in 2007. I had not known this until I did some research for this review. We have a video game based on a short film, which makes Floor Kids completely original and one of a kind.

Spiritual Content: What little story that is present in the game refers to you the player as the chosen one and mentions that a prophecy foretold that the player would come. It doesn’t go into spiritual themes deeper than that, but is worth a mention since that it is in there.

Positive Themes: Floor Kids is rated E for Everyone. There is no violence, crude humor, negative language, or sexual themes to be found. If the very light spiritual themes aren’t a problem then Floor Kids is a game that can be enjoyed by all ages. 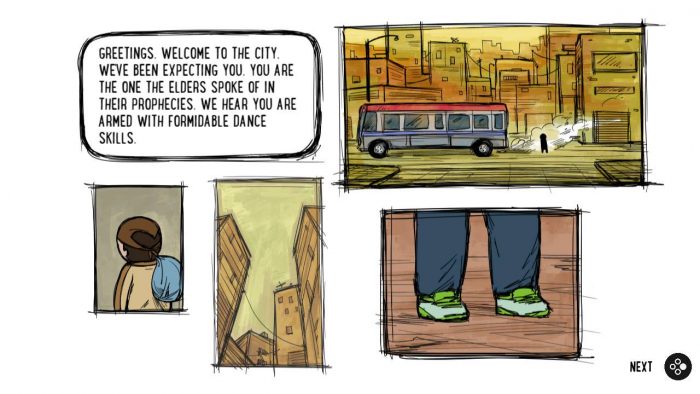 Floor Kids falls into the genre of rhythm games. There have been some huge titles in this genre that have made waves in the industry such as Dance Dance Revolution, Just Dance, Guitar Hero, and Rock Band. Floor Kids puts a spin on the genre and focuses on break dancing in particular. The price tag of the game ($19.90) event reflects on that inspiration because of a move called The 1990. JonJon and Kid Koala return to expand on that short film through more art and more music.

The short film may just capture a single battle, but the game gives us more characters and plenty of venues to bust our moves. The basic premise is to build up a crew and rise to fame and earn street cred. The game depicts that through change in venue, as new characters are unlocked along with new venues to preform in. There isn’t much story other than a short comic before each stage, which means we don’t get much personality from our eight b-boys and girls other than their unique dance moves. 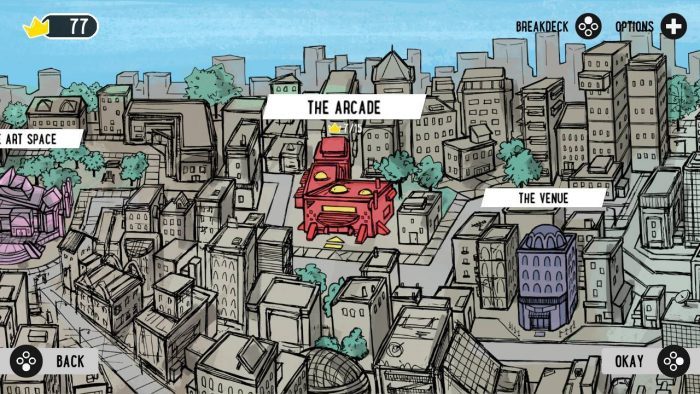 Players earn crowns as their score increases, unlocking more venues as a result.

What we don’t have in personality is made up for in style, and JonJon brings an art style that represents dance culture in what looks like simple cartoon sketches. This aesthetic was used in the film, but in the game there is so much color and detail here especially within the stage backgrounds. The characters also retain that simplistic style but have moves that bring their own flavor to the dance floor. In discussing art style I don’t find myself using the world “relatable” often, but that fits here. These characters look like something I could probably sketch myself.

Kid Koala handles the other half of the presentation and brings us some awesome tracks to bust out some moves too. He captures the three genres of music that break dancing utilizes: hip-hop, funk, and beatbreak. All of these genres blend very well, but the most noticeable and my personal favorite tracks are inspired by funk. Many of the adults listened to funk where I grew up as a kid, which is why those are the tracks I enjoyed the most. There is even an option in the pause menu where the sound effects can be turned off; I have continued to play that way since discovering that feature. I’m waiting for the soundtrack to be released somewhere so I can jam to it while writing or drawing.

The gameplay compliments the moves and what the characters are doing in way that enhanced the immersion. Tapping the face buttons to the beat earns points, but moving the left stick in various directions while doing that will help execute a move. Pointing the stick up or down while still pressing the face buttons will have the character executing a “toprock” or “downrock.” Holding the stick in any director can execute a “freeze” move. Rotating the stick will execute a power move that involves the character spinning in some manner. Another thing I discovered during my research is that all of these types of moves consist of the actual nomenclature when referring to the art of break-dancing. 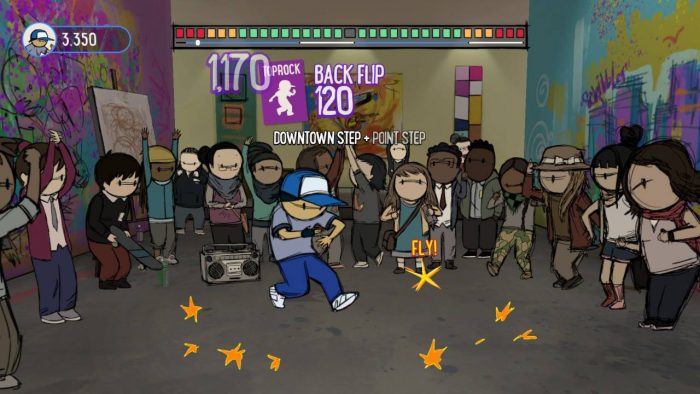 Its a strange comparison, but seeing those combo chains brought me back to my Tony Hawk days.

In between the freestyle sections where combos are done, there is a mechanic that is heavily influenced by other rhythm games. These segments are called “choruses” and have players tapping face buttons to a specific rhythm. That is then followed by a repetitive button tapping segment that was very uncomfortable on my hands in handheld mode. Being that these are intended to be choruses they show up twice in each song. These can feel like twice too many during long play sessions. 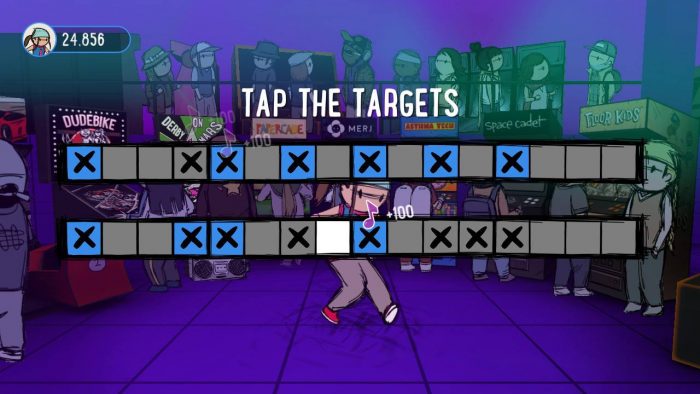 These patterns get more difficult in later stages.

Singleplayer is considered to be a freestyle mode; that is where characters, venues, and tracks are unlocked. I unlocked all of the characters within the first hour and I had already unlocked most of the venues not long after. It takes around only two hours to see everything, but the real time sink is mastering each character’s moves and combos. I was sad to see that everything was over before it even started, but getting better at the game and achieving a higher score is what keeps me coming back—similar to a Tony Hawk game in a strange way.

To capitalize on the two Joycon setup of the Switch, there is a two player battle mode. It works nearly the same way as singleplayer, except players go back and forth against one another during a single song. The player that is standing and watching can use a “burn” power-up that can mess up their opponent, while the player that has the floor can use a shield power-up to block it. I feel like this is where the true meat and fun of the game can shine if a group of people really get into it. I unfortunately don’t do much local multiplayer, so this was something I couldn’t test in the right environment. 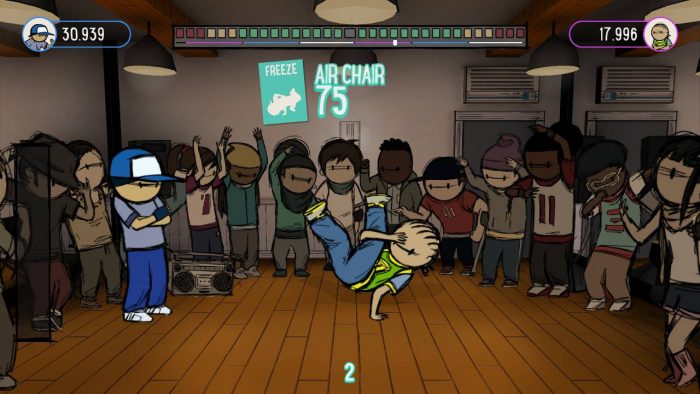 I would enjoy the multiplayer much more if I had people to play locally with.

When playing Floor Kids, I could feel the love that the developers have for the culture; it is represented down to the core. After playing Floor Kids, I have gone and looked at other work from both Kid Koala and JonJon. Koala’s music is like nothing I’ve ever heard. He brings his talent and lets loose within the soundtrack of the game. As for JonJon, his unique hand-drawn art style from his films is also represented here. Floor Kids has style that bleeds all over the screen because of this dynamic duo. I’d recommend picking up a copy if you appreciate the style and culture. I only wish we got to see the world built upon and get know our favorite b-boys and b-girls along with this city that their crew is carving through.