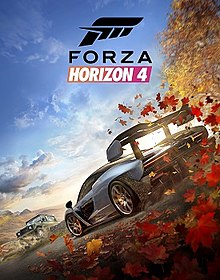 Shortly before the release of Forza Horizon 3, I was introduced to the series with Forza Horizon 2. I had finally experienced this great racing franchise I heard so much about. From then on I reviewed Horizon 3 and went on to review Forza Motorsport 7 the year after. Since 2016, I have visited the Forza franchise every year just like a fan of Madden or Call of Duty does with those respective franchises. Though I have less experience with Motorsport, it has been entertaining to see how both versions improve upon themselves and the different experiences that they set out to achieve.

With an ESRB rating of E for Everyone, there isn’t much negative content to be found in the game. Cars can crash into one another and get damaged, but it is not depicted in a violent manner. Some environmental structures can also be destroyed, such as fences and signs. One of the types of races players can engage in are street races, which are not legal according to the rules of the festival. Music is played through the various radio stations that players can listen to, and while there is no foul language, there are some songs that may contain sexual themes and references to drugs and alcohol. 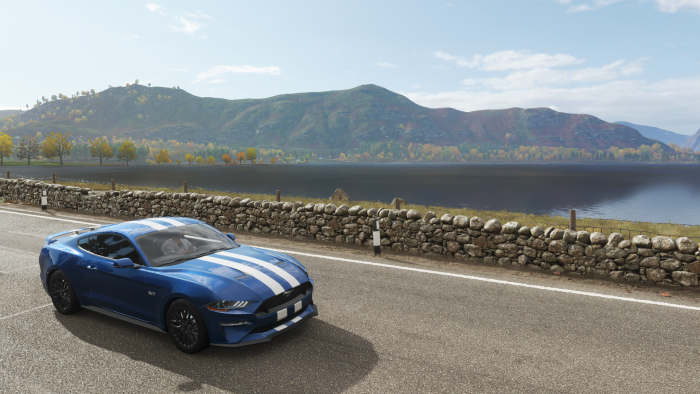 The Horizon Festival moves out of Australia and into the United Kingdom this year. Instead of racing through the outback, you will be touring the British countryside, visiting the Lake District and many landmarks. I found the location to be a nice change of scenery from the yellows and browns to the beautiful greenery and majestic mountains. For some reason, my attention was drawn to the many short cobblestone walls of the area, but that is likely due to how much time I spent accidentally sliding into them. My time in Horizon 4 has me wanting to go visit this place someday, but I wouldn’t worry if you reside there since I don’t actually drive.

In Horizon 3 we got to experience a different season in the “Blizzard Mountain” downloadable content, but we get to experience all four of them in this sequel. Seasons are the key feature of Horizon 4 and meant to make the map feel like a living world instead of a piece of scenery. Each of them offers unique elements from environmental details all the way to exclusive Barn Finds/unlockable cars and events. In fall, you might see the harvest being reaped out in the fields creating more hazards, and some bodies of water will be frozen in winter that enables you to make some shortcuts that weren’t accessible before. Winter was where I felt the biggest change because I had to choose my vehicles more carefully since the super fast sports cars became less viable.

When the UK turned into a popsicle, I enjoyed tearing through the snow in a Ford Raptor, but I had a 2017 Bentley that I would take out when the weather got much nicer. It is worth mentioning that Lexus, Toyota, and Mitsubishi have all pulled their brands from the game due to the depiction of their cars being damaged—a shame since this series isn’t all that violent. However, there were 450 cars available at launch and even more by the time this review is published. Even if your favorite brand isn’t here there is a guarantee that you’ll enjoy being behind the wheel with so many options. 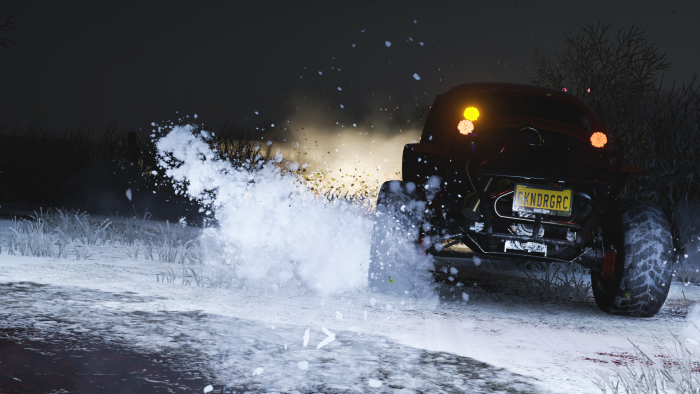 A cross-country race in the midst of a storm at night is intense.

The seasons are set to last a week and set on a world clock so that players are experiencing the same seasons and at the same time, but with an exception. Before you can get on that timeline, there is a four to five-hour introduction that takes place through all seasons. Players are required to complete a number of races before competing in the season championship, and to rinse and repeat that through all four of them. I understand that this was likely done to let players experience all four seasons in their first few hours, but it feels like a slog. Fatigue nearly set in during Winter, as it was the final season and seems to ask for the most influence points before completely joining the Horizon Festival.

Those influence points you need to unlock the season championship races are new the series. They act as experience points that improve your rank and give access to more events as you progress. There are plenty of ways to earn influence, but the strangest is through Mixer integration. By connecting your Mixer account you can stream the game or watch Forza Horizon 4 streams to gain extra influence. While that feature sounds cool on paper, it becomes an option to farm the points for those who aren’t willing to put in the work. On a positive note, if you enjoy watching or streaming then it is a nice way to be rewarded for your fandom. 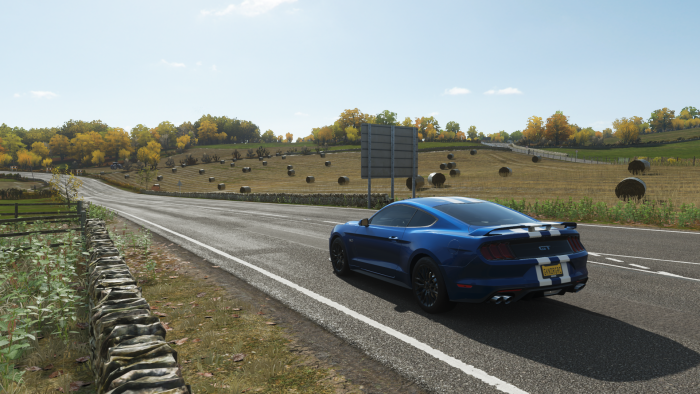 Cruising through the country is a nice break between races.

One of the features that I love in this franchise is the accessibility geared towards players of all skill levels. Many racing games pride themselves in being the most realistic, but the Forza franchise lets players tailor the gameplay to their liking with multiple options for difficulty and driving guidelines. Those options can bring fun for the casual racing fans like myself or offer a challenge to the more hardcore players and veterans. To my surprise, the game asked if I wanted to crank up the AI difficulty because I was winning so much. There are games out there that ask if you want to drop it down, but I’ve never had a video game ask me if I was still having fun with it.

Other great features like the Blueprints/event creation and the Horizon Showcases make a welcome return. When you get burned out on a season the blueprints enable you to create your own custom race that doesn’t have to take place in the current one. The showcase events still make for a visual treat; especially watching a hovercraft tear through the environment as you are trying to catch up to it.  Your favorite radio stations are back from previous entries too, but it wasn’t long before I muted the music and turned on Spotify so I could race to my own tunes. 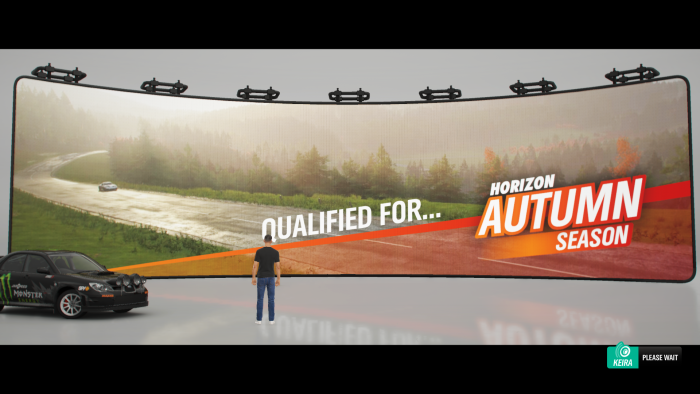 As the franchise progresses, more options become available to customize our driver. The customization of the characters physical features are still limited to presets but there are so many clothing options. Every once in a while you will have the chance to unlock more attire through wheel spins which also make a return to Horizon 4. It sounds like it wouldn’t make much sense to worry about an avatar in a racing game, but you will see your character often. I’m still bummed that my character looks nothing like me, but at least I get to dress him in clothes I’d wear.

Forza Horizon 4 feels like more Forza due to the franchise’s annual release, and yet Playground Games has improved on an already superb formula. Though the development teams rotate, they seem to be working with one another to further the franchise as a whole. With the first few five hours being a drag and the flawed Mixer integration I must say that I am not in love with this iteration as I was with the previous. I have gotten my hands on many generations of racing games, and none have been accessible for a player of my skill level. Therefore, I say if you are looking for a great racing game to play then let it be Forza Horizon 4. 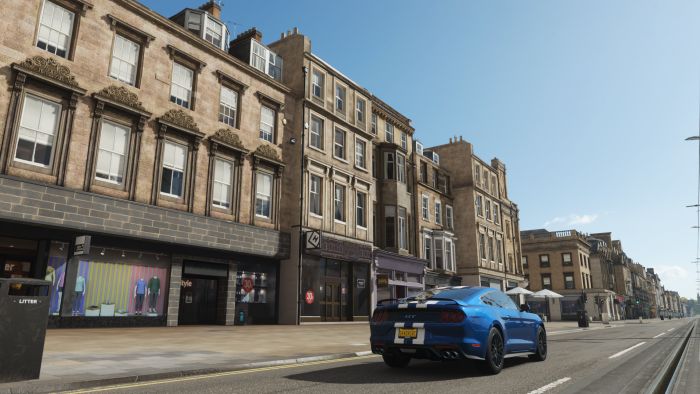 Even the towns are a sight to behold.

The Forza games are known to be the definitive racing experience. and the ever-changing seasons add a whole new layer. The UK setting also brings yet another part of the world for us to tour through. Forza Horizon 4 more of everything you love about this series and more.