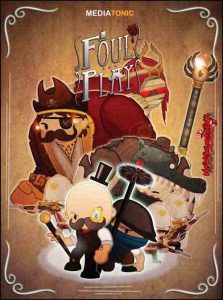 As far as beat-em-up games go, most of them have the same premise. You play as the tough guy or his friend to save someone you love, or you are aiming to claim vengeance against an evildoer. There is not much variety in the who, what or why. Yet here comes Foul Play, the side-scroller where you must fight numerous enemies for the entertainment of an ever present audience. Through the five acts, you must make sure your captive audience will stay until the story is finished.

Violence: You and your co-op partner fight stagehands dressed up as various monsters such as werewolves, mummies, and vampires. Your methods of combat include combos, counters, beat downs, pile-drivers, throws, and projectile returns. Mr. Dashforth uses a cane to battle rapscallions, while his partner Scampwick uses a broom. You see fake blood on some of the vampires.

Drug/Alcohol Use: There are a couple scenes that take place in a tavern setting. Dashforth has a pipe that he uses during some cutscenes. 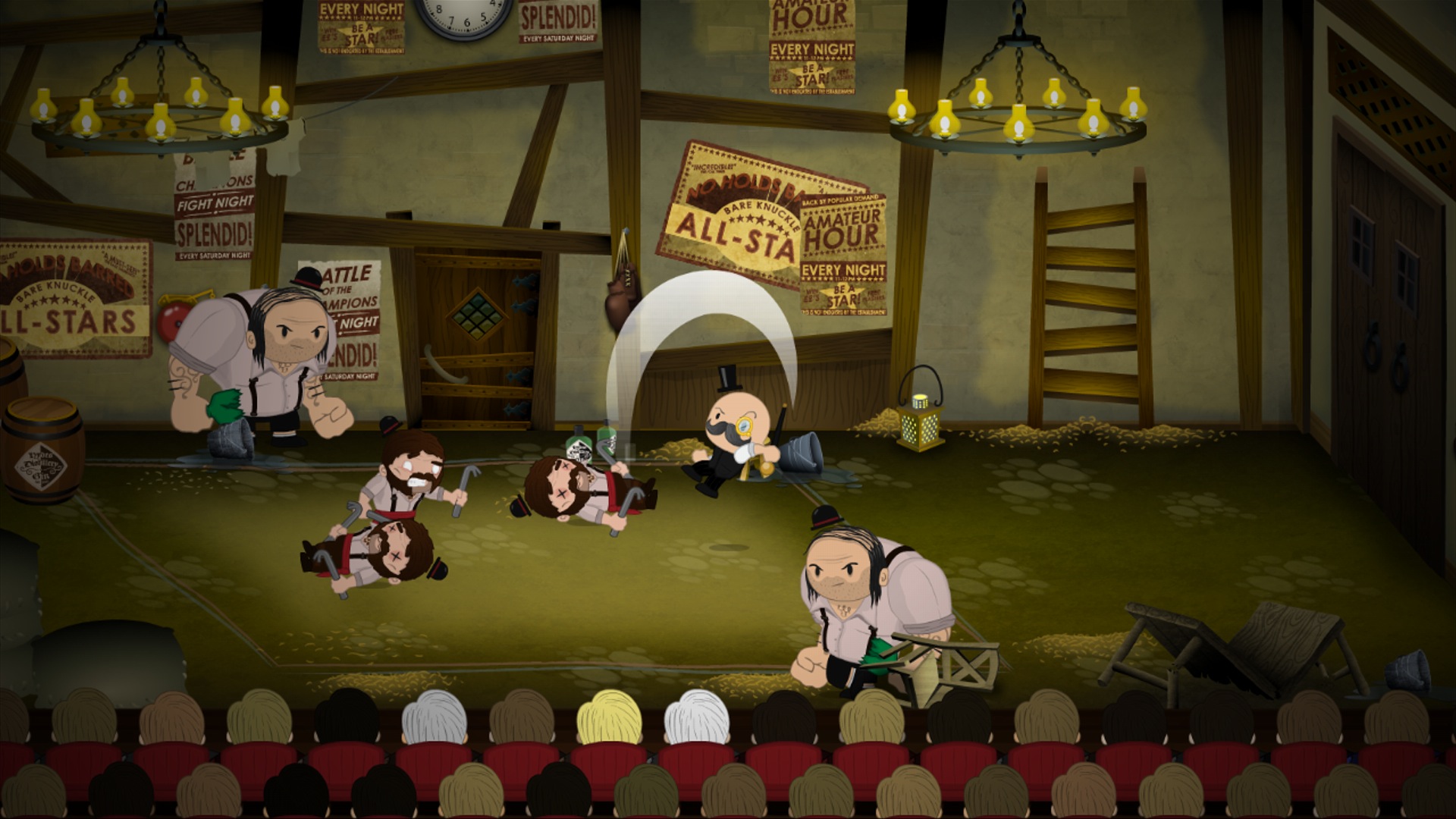 Language/Crude Humor: The exclamation “My god!” is used a couple times. This appears in text boxes and can easily be skipped by mashing the next button.

Spiritual Content: You face off against “supernatural” threats and the protagonist is a daemonologist so you see occult symbols on Dashforth’s office walls. No real daemonic forces make appearances, just references to another dimension.

There is some foul play about. While on a case in Cairo, daemonologist Baron Dashforth and his partner Scampwick find the top hat belonging to Dashforth’s father. This cannot be mere coincidence, as more of his items appear as monsters are defeated. The audience is on the edge of their seats; what could the connection be? The next act holds more questions and answers. As the crew resets the stage and the lights dim, Dashforth lights his pipe and relays the events leading to the coming bout of fisticuffs. Foul Play is a stage play where your performance determines if you can finish the story being told. 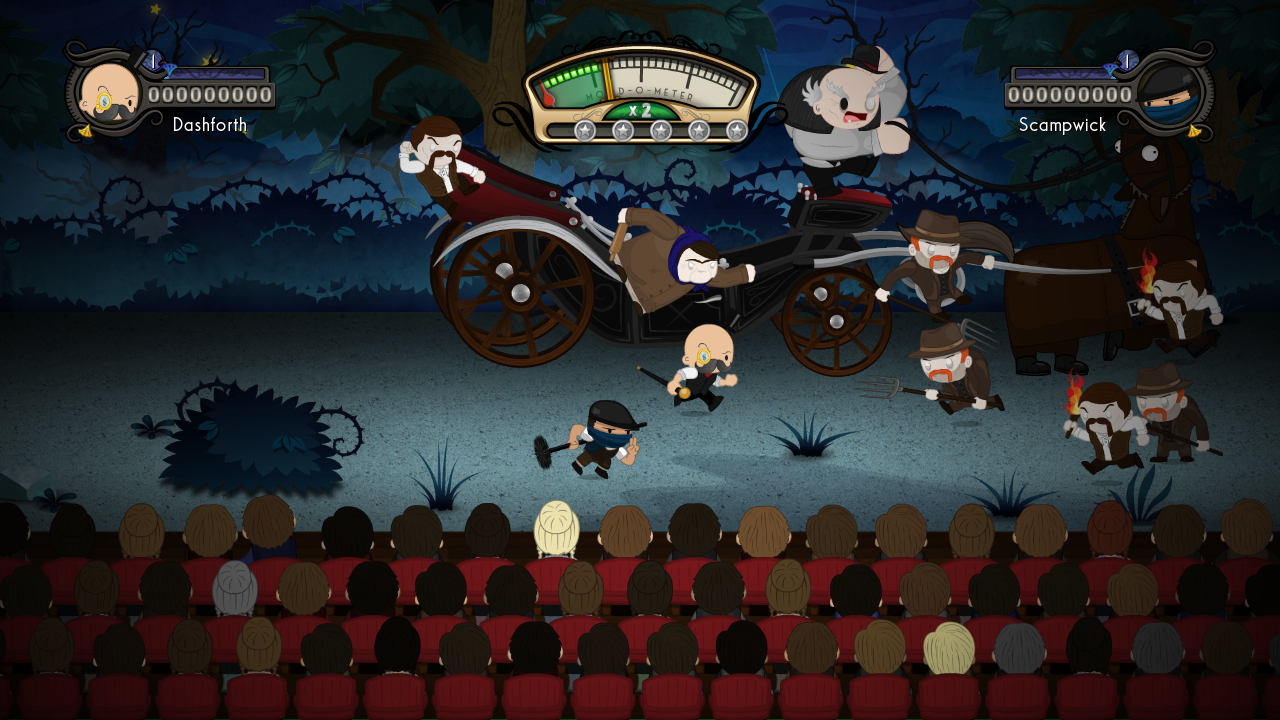 As you engage in battle with the play’s foes, a Mood-O-Meter fills with successful bouts and lowers with each bit of damage you take. Your characters do not fall in battle until the audience has booed you off the stage. As the meter fills, your score multiplier fills up to times five and you earn more stars for the current act. You can earn between one and five stars, and you are more likely to get higher stars by performing perfect scenes without taking damage and by completing challenges. Each of the three difficulties–Understudy, Lead, and Veteran–have the same challenges, sadly. While some of the challenges exist for no apparent reason, others are connected to the game’s setting; on occasion, someone from the audience will encourage your characters to perform harder out of fandom. Should you end up no longer in the audience’s good graces, the Showstopper ability provides a major boost. When activated, your combo multiplier is doubled in solo play and quadrupled when in co-op. This is especially helpful when completing challenges that ask you to perform a seventy-five or higher combo. The audience loves it so much you see canes, flowers, and top hats soar into the air. 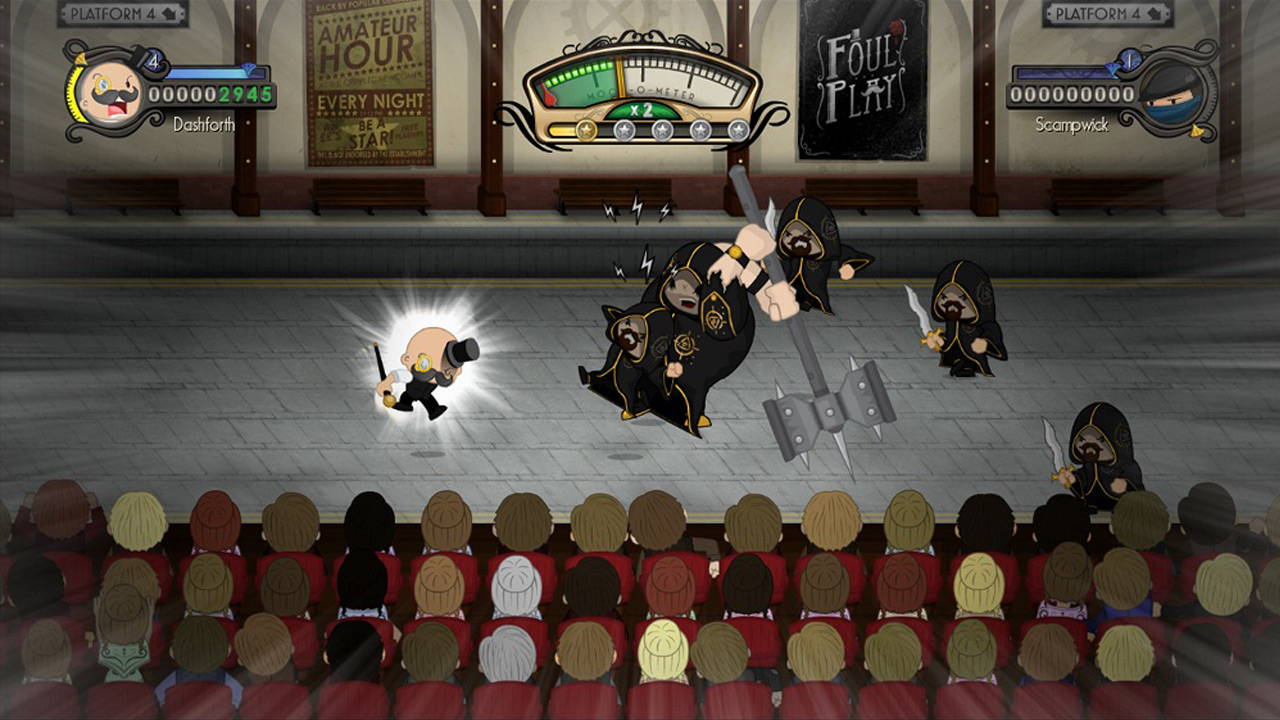 As you complete challenges and level up, you unlock charms to aid you in the plays. These modify the play in different ways, such as the werewolf claw which speeds up how fast you win over the audience, or the rabbit’s foot that increases how much your combo grows on a successful parry. Two can be equipped at a time, and some are intended more for co-op play. Any combination can lead to differing experiences, especially in co-op. You and your partner are allowed to use differing load-outs to encourage experimentation. With seventeen charms altogether, there are many possibilities to choose from.

Co-op works seamlessly; simply turn on another controller and play. There are no real issues with this feature, except that it seems nobody online plays. Private lobbies are at least an option if you want to enjoy it with a friend who is not in the same room with you. It is much more fun playing with friends, but solo is also a treat. 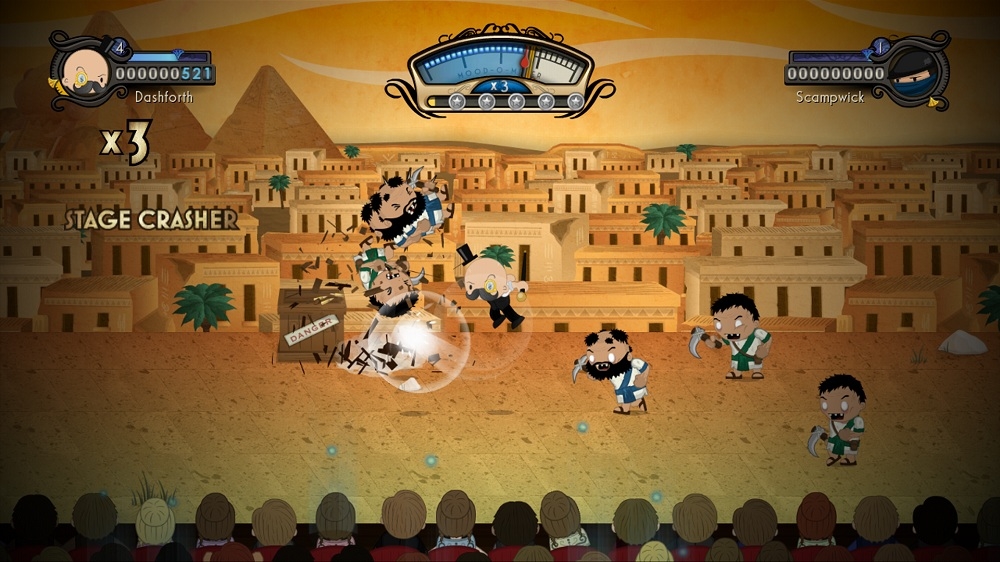 There have not been many high quality beat-em-up titles these days, which is a shame. Foul Play takes what made those cooperative games special to many Super Nintendo and arcade fans and gives it a charming and fresh look. Canes pull actors offstage like in old cartoons, stagehands look embarrassed as they work on sets, and while the aesthetic is, cartoon-like, the play looks as if it were actually being performed in the Victorian era. The dialogue in the actors’ speech bubbles sounds like it comes from that time period, as well. You can clearly see the extras in most of the costumes being worn on stage, and occasionally they will attempt to sneak off the stage after taking a beating. When areas are cleared, sometimes you must advance to your stage cue positions or run as the background changes. Journal entries–which can be found in the main menu– detail your adventures, describing creatures you have faced in a humorous, tongue-in-cheek manner. For example, you are told the Werewolf’s transformation is not an improvement and that you should just avoid heading to the countryside by all means.

If you are looking for a simple co-op game to play with your friends or kids, Foul Play is one to consider. The controls are easy to pick up. The adventures of Mr. Monopoly-esque Baron Dashforth and Scampwick are best enjoyed with a close one, but even if you are alone, a fun time is still to be had.

Foul Play is a charming and fresh take on the beat-em-up formula. Whether you play solo or co-op, fun will be had following the adventures of Mr. Dashforth and Scampwick.