Based in the UK, Mode 7 is made up of a core team of four developers, including the two co-founders Paul Kilduff-Taylor and Ian Hardingham. Frozen Synapse 2 stems from the success and popularity of the first Frozen Synapse, released in 2011. The original game was met with much acclaim and received many awards, including PC Gamer’s Strategy Game of the Year award. The same cannot be said for the sequel. With not much to reportedly add to the Frozen Synapse formula, many players have been experiencing mixed feelings about it. Having not played the previous game, this review of Frozen Synapse 2 will have little bias towards the franchise.

Violence: Frozen Synapse 2 (FS2)is at its most violent when squads of people are pitted against each other with different types of weapons such as bazookas, rifles, and shotguns to name a few. When a person dies or is killed, they merely fall to the floor and disappear. No blood or graphic portrayal of death is shown in the game.

When you first boot up FS2, it feels like you’re logging into some sort of terminal or VR system; a computerized voice welcomes you and asks you to login straight away. You will need to create a username and password, as the game requires the player to make one for online play and user individualization. FS2 uses this method to help the player keep track of stats, games won and lost, levels gained, and friends made. Levels are gained the more you play, showing other players how much of a veteran you are. 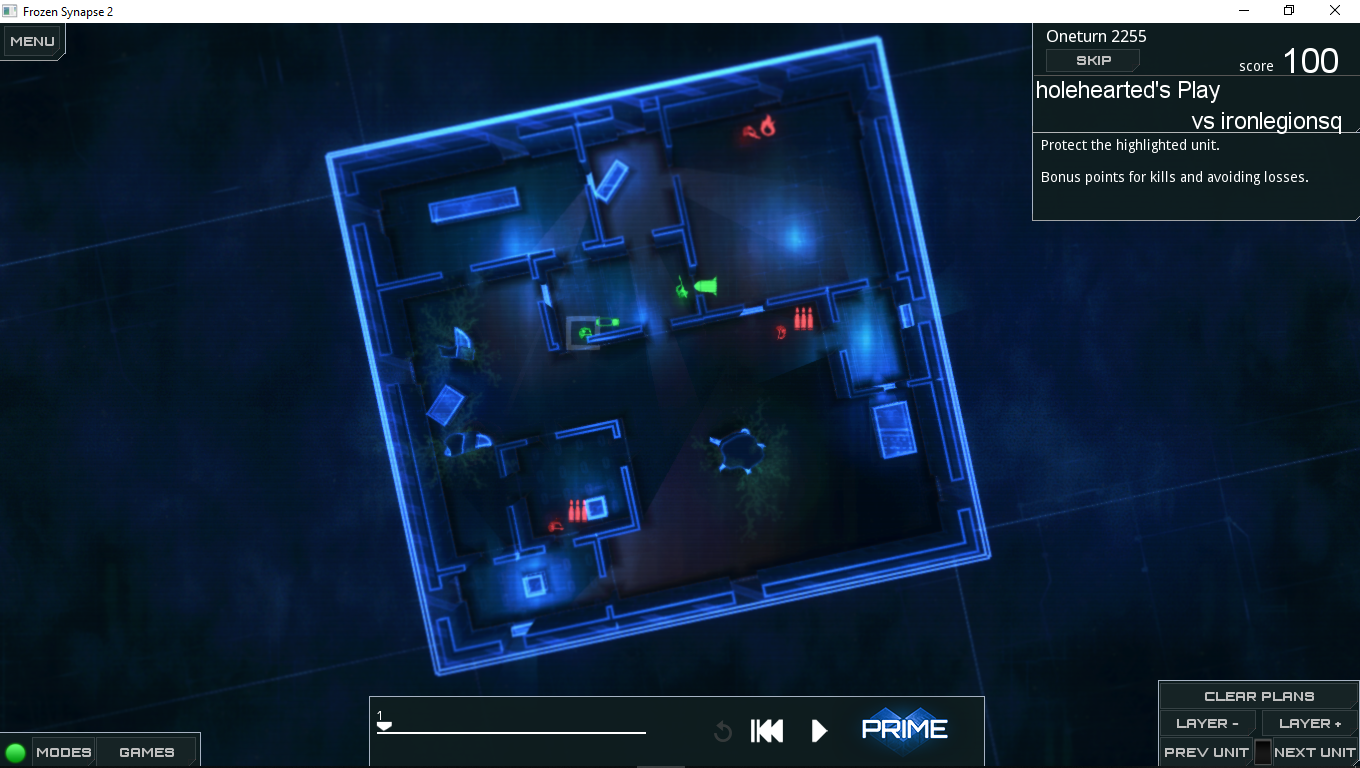 Versus a bot. These are always resolved in one turn.

Once you login, you will be able to see the many different modes available; there are both single and multiplayer modes. The single player mode contains city mode, which I explain a bit further down. Multiplayer contains several gameplay modes, including one called “one turn” mode and regular match-ups with players around the globe. “One turn” mode is a simple match against a bot which only lasts one turn. Scores and results are drawn up according to how many troops you eliminated and how many you lost. Regular matchups are between real players and consist of as many turns as it takes until one team is completely eliminated. This is accomplished by taking a turn and submitting it, “priming” it for the next player. 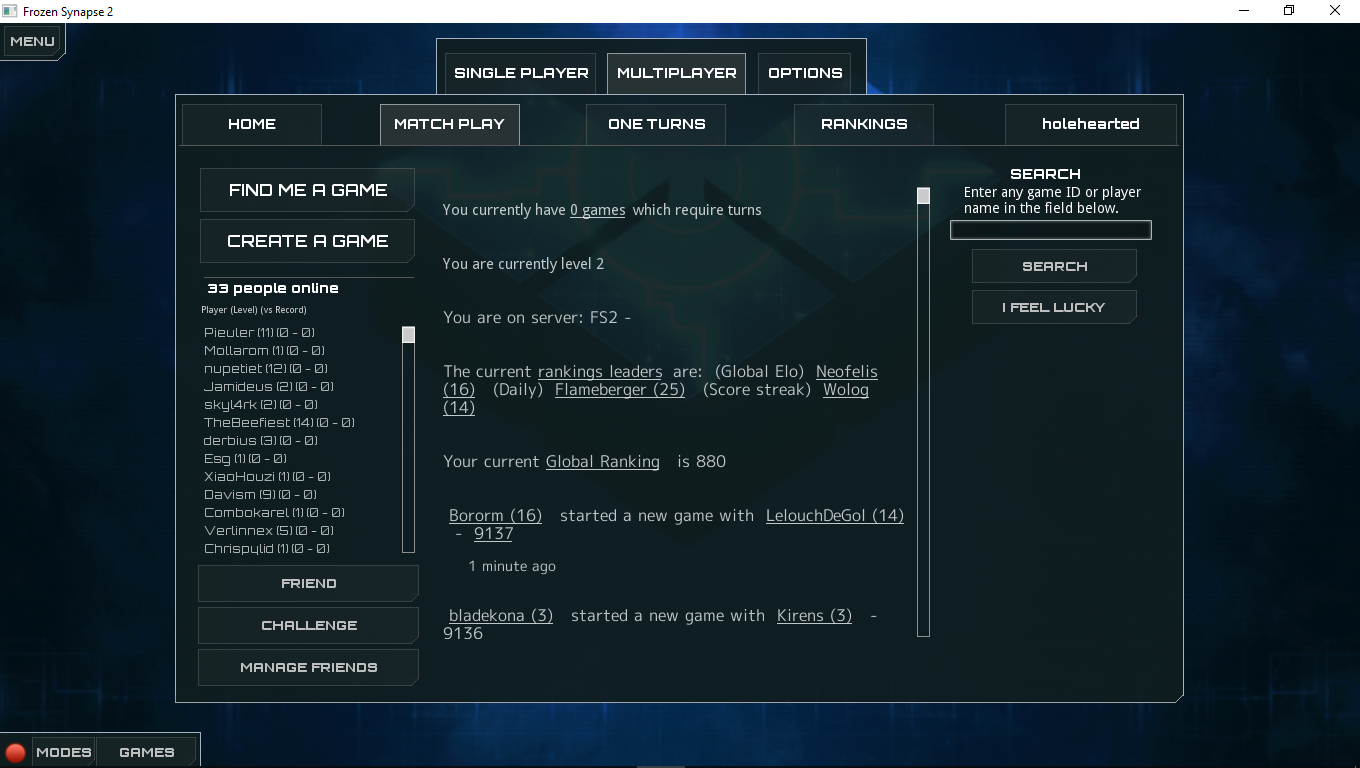 The mess of options can be confusing, but it’s fast and easy to get used to it all.

Any matchup or one turn always involves a squad of armed individuals pitted against an opposing squad. The objective is to maneuver your troops through rooms and around objects to get a good vantage point while also avoiding being killed. It can be tough, since you not only have to guess what your opponent will do, but also move your troops out of harm’s way. A plan can instantly go bad if you read your opponent incorrectly and it can all end in a single turn. 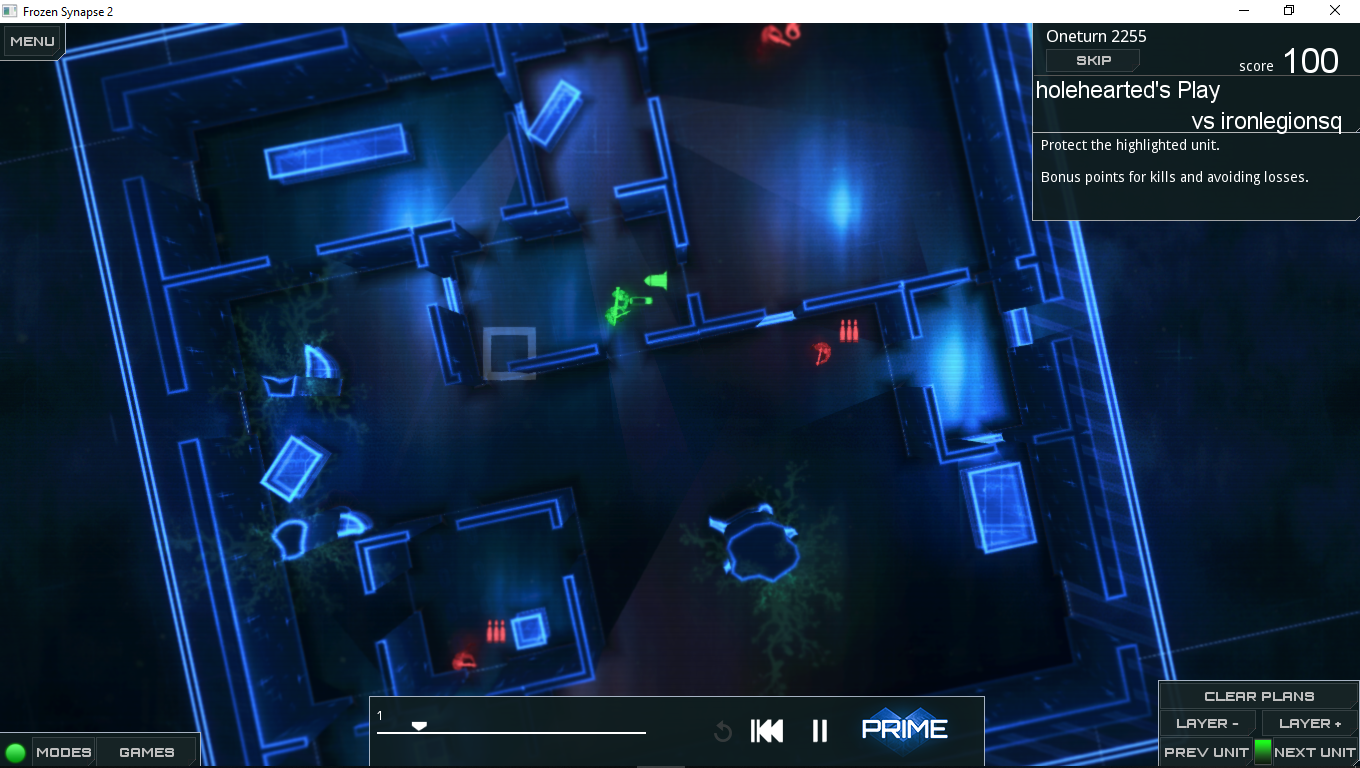 Converging on where I thought targets would be. Spoiler: I was wrong and they got me in one turn.

At the beginning of each match, you are given a set of troops with random weapons, the shotgun and rifle being the most common. The troops you are dealt will usually come with a specialty weapon troop, which could be a grenade launcher, a flamethrower, or even a bazooka. Each weapon has different range and is shown on screen when planning a direction to aim and fire. Whenever a troop sees an enemy troop, he shoots on sight, so all you have to do is choose the direction you will want your troop to be aiming. These gameplay mechanics are simple and easy to learn. There is even a convenient little tutorial to help you learn the basics. I strongly suggest you take advantage of it.

Online gameplay is seamless, mostly because it is all done one turn at a time, almost like playing virtual chess with another player somewhere in the world. The moves do not happen in real time; they are submitted and executed once your opponent submits his move as well. The outcome is played right before your eyes, letting you see the results of your plan. After the moves happen, the screen will not show opposing troops location—only where they were last seen. This adds some suspense to the game, since for the rest of the match, opponent’s whereabouts are unknown unless they show themselves. It is generally a good strategy to use bazookas, grenade launchers, and other area-focused attacks to expose hiding places and cover spots. 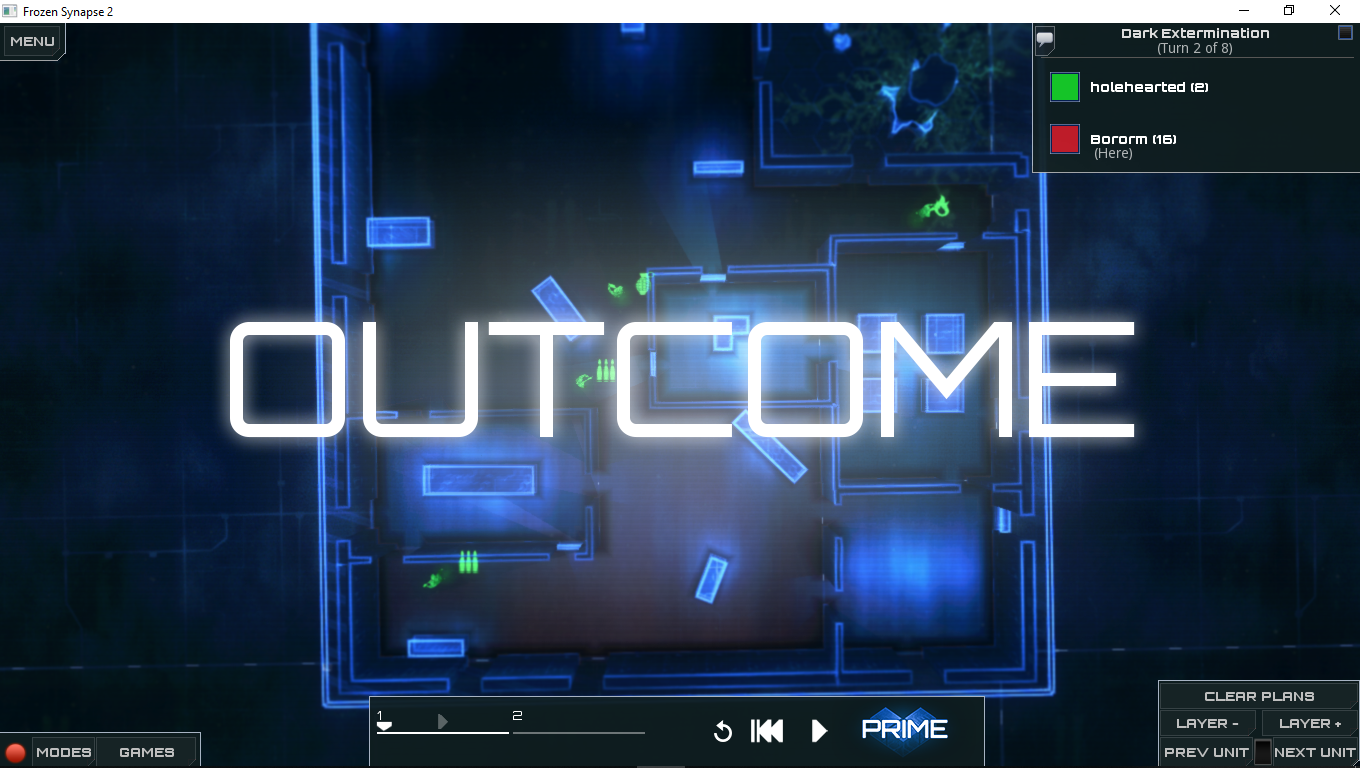 The outcome plays out right before you eyes to show you if you lost or won (hopefully the latter).

Regrettably, the player base is small right now, making online matches random and hard to find. You can choose to make yourself available for a match, causing FS2 to search for a match for you for sixty seconds. If no match is found, it will notify you to try again. At times, you will be in the middle of a game and a prompt will pop up on your screen, asking you if you would like to challenge a player who is seeking an online match. You can choose yes or no, but it is always easy to return to your previous game should you choose to leave it briefly. 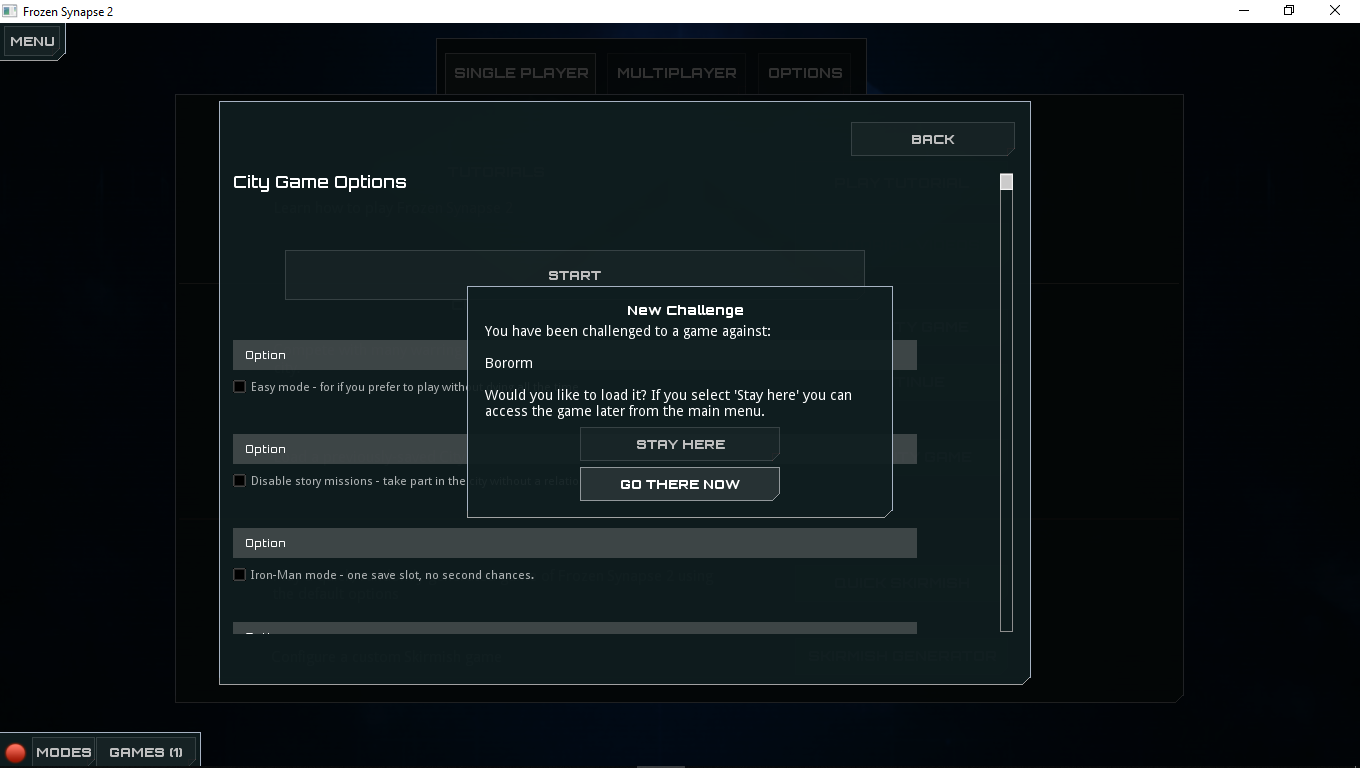 In single player mode, there is a fantastic campaign-like mode called “city mode.” In this mode, you are given control over managing troops, funds, and resources to take over an entire city. The story behind city mode is forgettable, but it is decent fun and you can spend hours assembling a team and storming buildings to take control. The way you take control of buildings is the same way you square off with real players in matchups—by taking turns and reading your opponent’s movement. It is easy to get lost in this mode as it involves dealing with an entire city while still maintaining the same gameplay that Frozen Synapse 2 boasts. 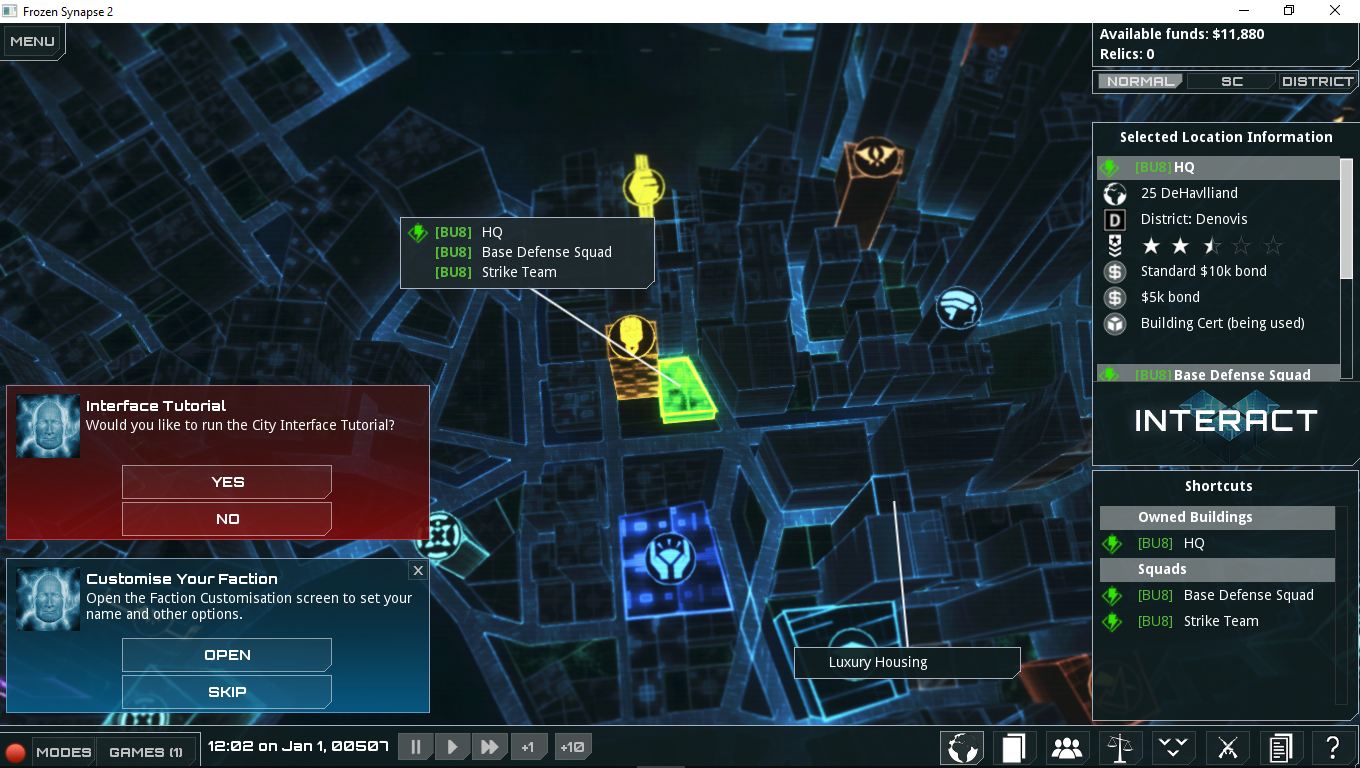 City mode can be a bit confusing. Use the tutorial for help!

The soundtrack is to die for and I highly recommend it for any fan of EDM music or techno. It is all electronic and it is full of smooth and chill tracks that actually help the player think and plan with ease. One of my favorite tracks, “Complicity,” is great for focus and calming. The composer, nervous_testpilot, also did the tracks for the first Frozen Synapse which is equally as good. Complimenting the game as well as the soundtrack are the graphics. Visuals only consist of Tron-like grids and colors, making it look like some sort of simulation. The graphics aren’t cutting-edge, but they’re good for the purpose they were made for.

Frozen Synapse 2 is a great strategy game, filled with interactive and simple gameplay that will keep your attention for a good long while. Unfortunately, with all the other games coming out, I fear FS2 runs the risk of falling on the wayside and being overtaken by other strategy games similar to it like Valkyria Chronicles 4 or Two-Point Hospital or even be out-styled by Laser League. Also, at a price that steep, it is simply not worth it. Throw this one on your wishlist and wait for it to go on sale; it’s still a great play.

Frozen Synapse 2 is a good game, but is doomed to be overshadowed by other more popular games. It's too expensive at full price, put it on your wishlist and wait for it to go on sale.