When new consoles are on the horizon, few other gaming developments can pull away gamers’ attention for long…but Chinese developer miHoYo has accomplished just that with the release of their new game Genshin Impact. This free-to-play action-RPG has taken the gaming world by storm, grossing over $100 million in less than two weeks and spawning countless new memes. Is this new game the real deal…or a shallow fad soon to be forgotten? 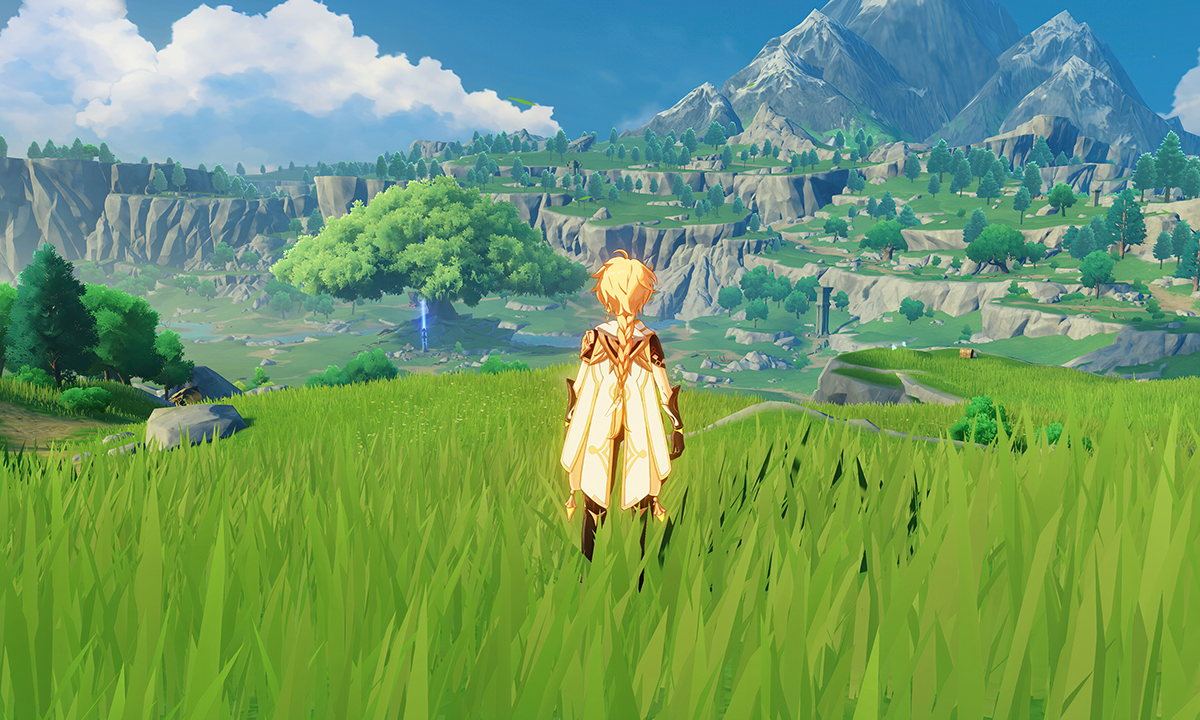 Violence/Magic: Genshin Impact contains plenty of action as you engage in combat with monsters and human enemies alike, but the violence is mild; there is little-to-no blood, and defeated characters simply “poof” out of existence. Your arsenal comprises swords, spears, bows, and magical spells.

Spirituality: Teyvat, the main setting of Genshin Impact, is a polytheistic land, with numerous gods and god-like beings watching over the various regions. These gods often come up in even casual conversation with NPCs. The values of the people of each region reflect the traits of their local deity—the god of Liyue, for example, values contracts and commerce, and so the people of that land spend much of their time trading goods and forming economic bonds with one another. I have to be careful to avoid spoilers here, but suffice to say that some characters perform religious rituals in order to gain the counsel of the gods. 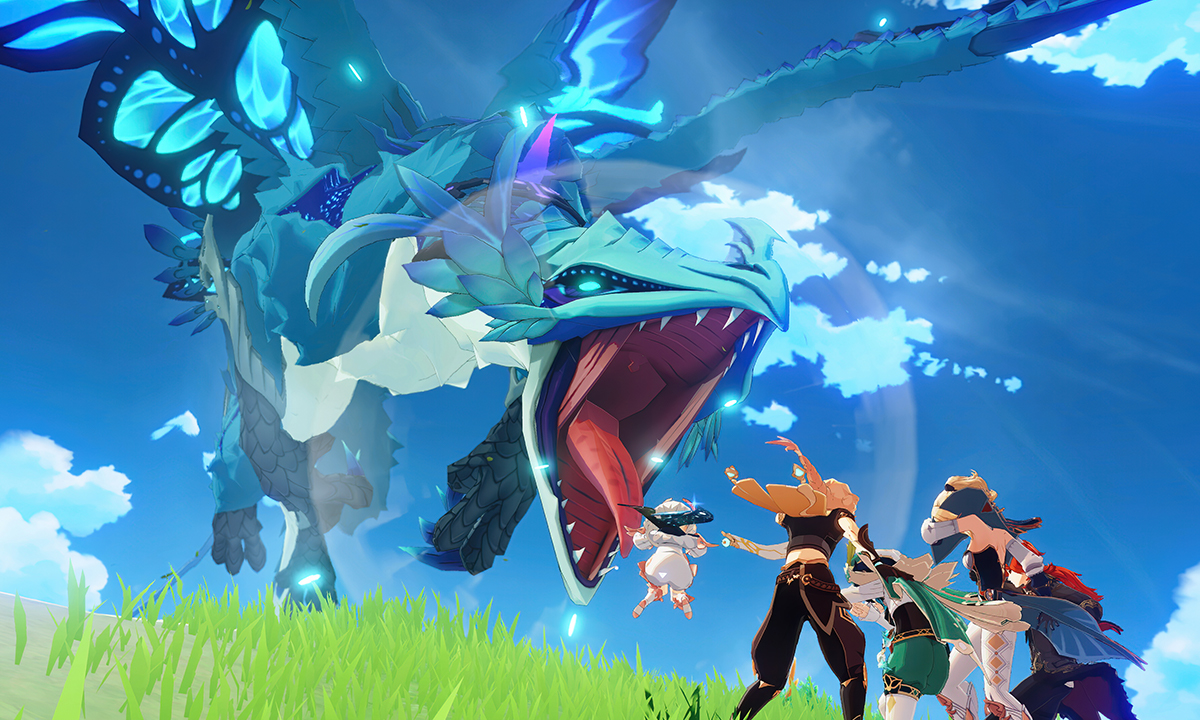 Sexual Content: Some of the female characters wear skin-tight clothing and/or see-through stockings, revealing a bit of leg or cleavage, and their breasts wobble like Jell-O with even slight movement. A couple of characters also engage in a bit of sensual innuendo, namely the busty librarian Lisa, and a shopkeeper named Ying’er who describes perfume-making in a weirdly sexual manner. All that said, the game doesn’t spend much of its time emphasizing sexuality, and the while some of the character designs could be accurately described as risqué, most of them draw more attention to the intricacy of the clothing than to any exposed skin.

Alcohol: The in-game nation of Mondstadt is world-renowned for its high-quality wine, and booze comes up as a topic at several points in the game, including in the taverns where you can find some inebriated patrons. 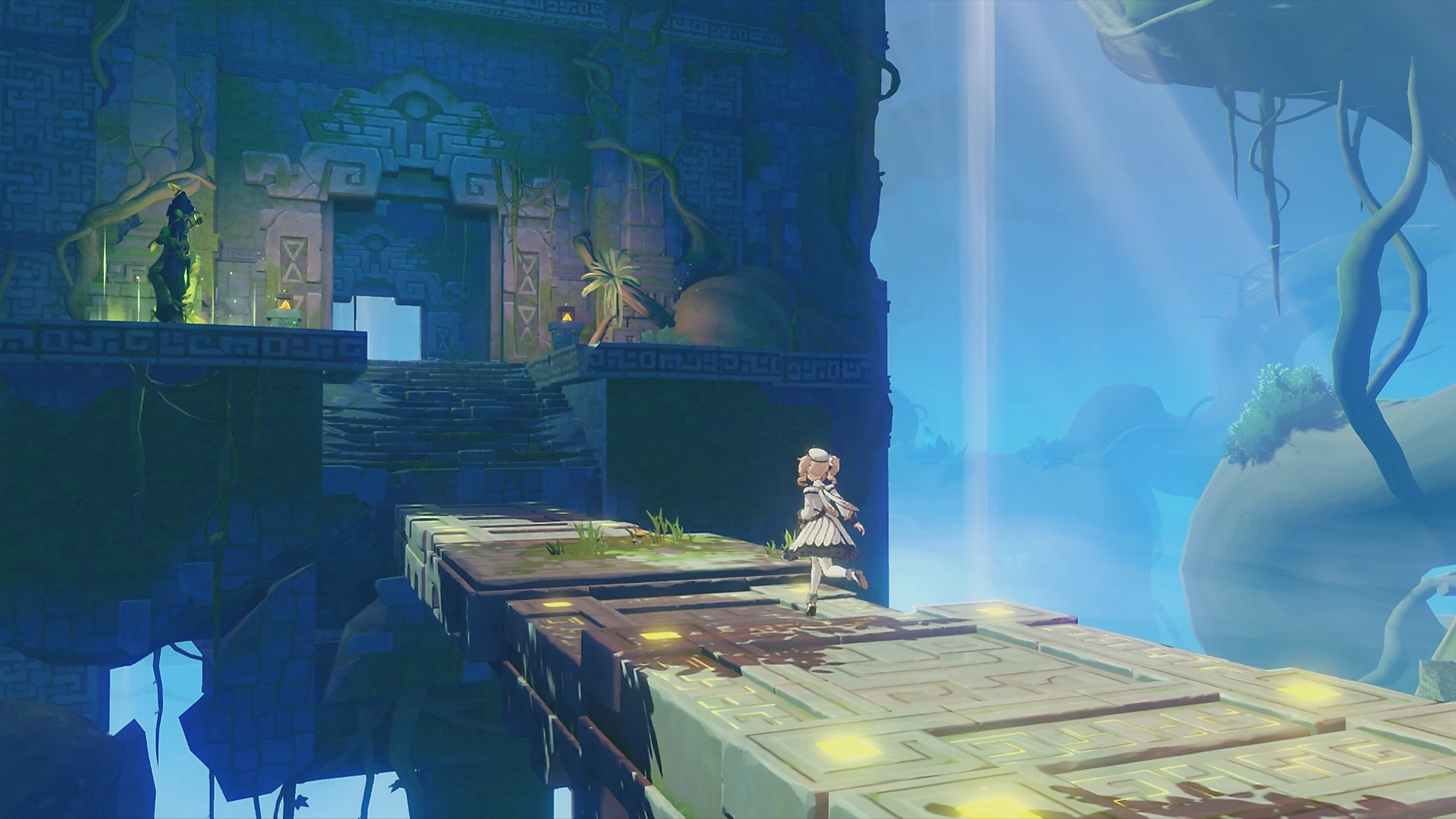 The story takes place in the fantasy world of Teyvat. Two siblings—a boy and a girl—have been freely traveling from world to world and are set to leave Teyvat in search of their next destination, when suddenly an unknown god appears before them and attacks. During this opening cutscene you select which one of the two twins you wish to play as during the game. Once you’ve made your choice, the two characters are separated and subdued by the god. Time skips ahead several years, and you meet Paimon, an adorable floating fairy who happily tags along with your character and serves as a guide to Teyvat as they search for the missing twin. 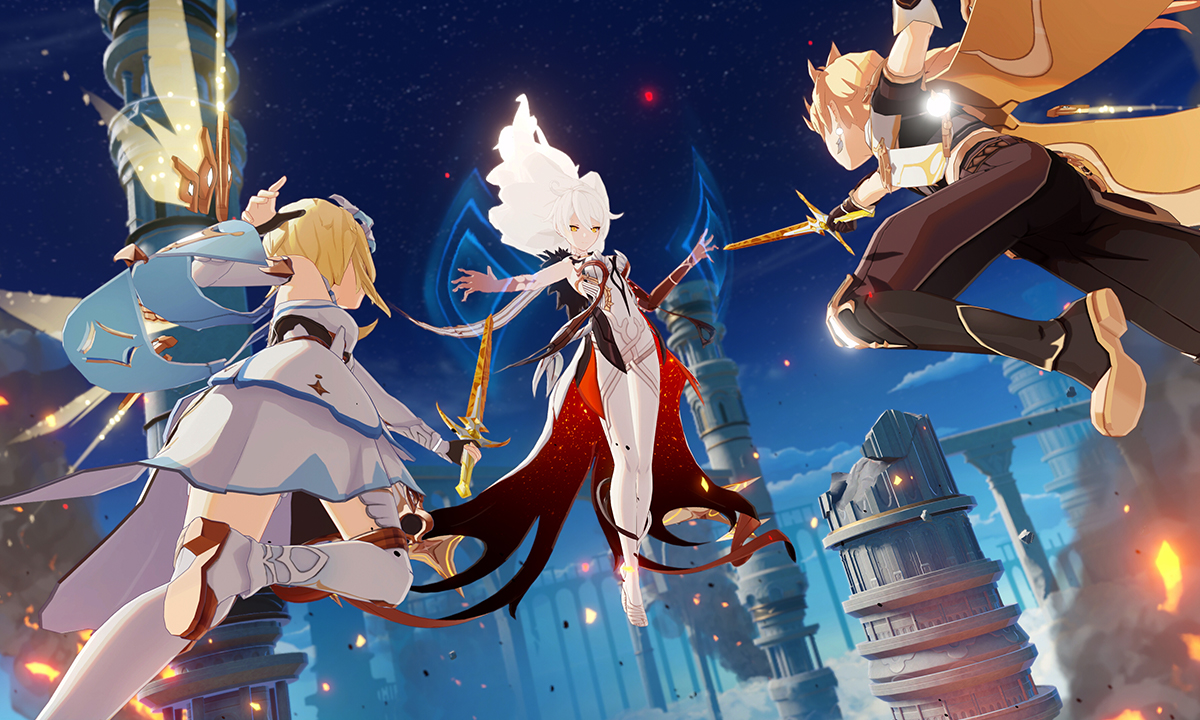 It’s difficult to render judgment on the game’s overall plot in its current state, because the story is far from over. The world of Teyvat contains seven main regions, but only two—Mondstadt and Liyue—are accessible right now, and I expect that players will see all seven before everything is said and done. The storytelling up to this point is lighthearted, with even the most dramatic sequences containing an undercurrent of optimism. The game has teased some intriguing twists, but much remains to be developed.

The individual characters stand out more than the main plot, for better or worse. The player character stays silent for the vast majority of the time, but the rest of the game’s cast of characters has plenty to say. While each character tends to be rather one-note, they nonetheless prove charming more often than not, and collectively they display a wide range of personalities. Through all your interactions, Paimon remains a constant with her cutesy dialogue that vacillates between endearing and annoying. 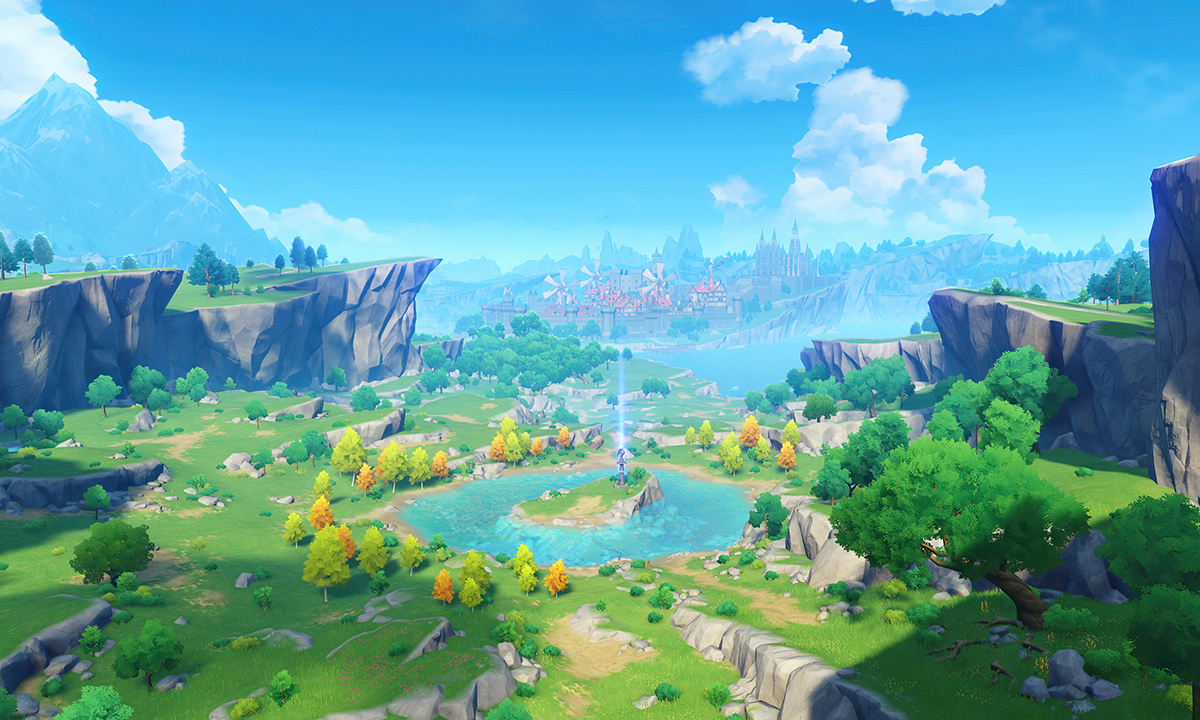 From the very outset of your journey, the game’s gorgeous artwork and breathtaking views take center stage, inviting you to explore the vast reaches of this magical land. Indeed, the best part of Genshin Impact’s gameplay is exploring the open world. Whether traveling through the wide plateaus of Mondstadt or the mountainous peaks and valleys of Liyue, each locale features stunning vistas and colorful towns, all filled with collectibles and resources necessary for the game’s myriad of activities. Treasure chests, small groups of enemies, and simple puzzles dot the landscape, enticing you to wander further into the verdant environs. The serene orchestral soundtrack is the perfect accompaniment to your journey, and great to play in the background for writing or studying.

Combat also plays an important role in Genshin Impact, predominantly consisting of quick and charged attacks that are easy to spam as you set up strategic moments to execute your special moves. Your party consists of up to four characters, each with a distinct elemental affinity and their own special abilities; discovering ways to use these varying abilities in tandem with one another forms the depth of the game’s strategy, and is one of the most compelling reasons to obtain new playable characters. I’ve only scratched the surface with the elemental combos possible in the game, but seeing those big damage numbers pop up above my enemies as I create fiery tornadoes makes me want to experiment more. 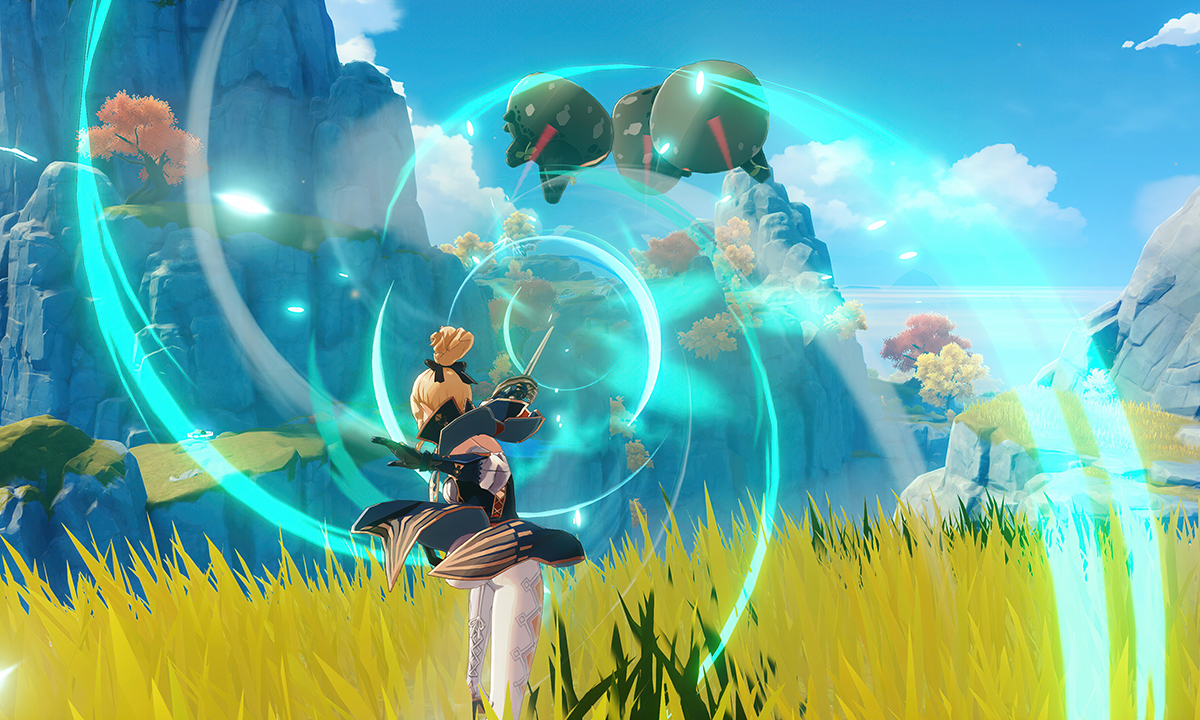 Slimes and the goat-like humanoid hilichurls serve as your most common foes, but you also encounter a variety of other fantastical creatures as well as some human bandits. While most of your adversaries prove easy to dispatch, some of the special combat challenges found throughout the world can only be completed by quickly and efficiently synergizing your team’s distinct moves. Dungeons unlock as you level up, offering even tougher challenges with greater rewards.

Speaking of rewards, Genshin Impact throws a lot of different resources at you for the purpose of upgrading. Characters, weapons, and the stat-boosting Artifacts each require different sets of upgrade materials, and level caps appear every ten or twenty levels that must be overcome with even rarer items. Some of these resources can be picked up just by fighting regular enemies in the overworld, but others can only be acquired by farming dungeons or minibosses, and those activities only yield rewards if you spend a special resource called Resin. Resin is Genshin Impact’s version of “stamina” or “energy” that you might see in other free-to-play games; each day your Resin replenishes to a set level, and once you use up your allotment for the day you either have to consume another limited resource to get more or wait for it to refill. 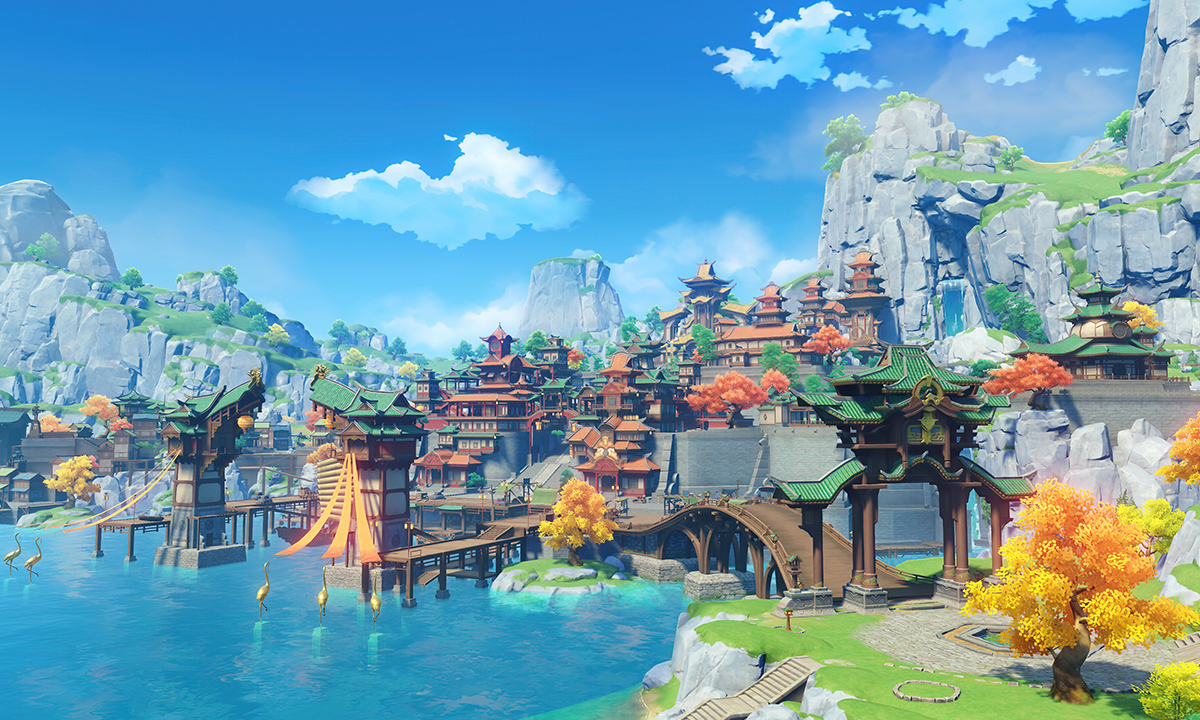 All of this plays into the game’s microtransaction systems. Players can purchase Genesis Crystals, which can then be spent on bundles of upgrade materials or converted into Primogems to be used in Genshin’s gacha mechanic, a kind of loot box that contains weapons and playable characters. I’m happy to report that Genshin Impact offers plenty of content for free, especially early in the game. I poured well over a dozen hours into the game, happily upgrading my characters and equipment and exploring every nook and cranny of this vast world before I seriously considered spending any real money. While some of the game’s best characters must be acquired through gacha, the ones you receive for free can get you through all of the main story quests released so far, as well as the vast majority of the side quests. Over time the character and weapon progression do slow down, incentivizing you to spend money, and the game is especially stingy in dealing out its premier five-star weapons and characters. You do receive small amounts of Primogems for completing even minor tasks, though, so there’s a chance—however slim—that you can nab some of the best characters without spending a dime.

The game also allows you to play cooperatively with other players, with one party joining the other’s world. You can request to match up with people both in the overworld and when tackling specific dungeons, and the game makes it easy to accept a co-op request, which can pop up any time during casual exploration. While this is a nice feature to have, it’s also entirely optional; the game as a whole is clearly designed and balanced with single-player in mind, as even the toughest challenges can be overcome with just your own four-character party. 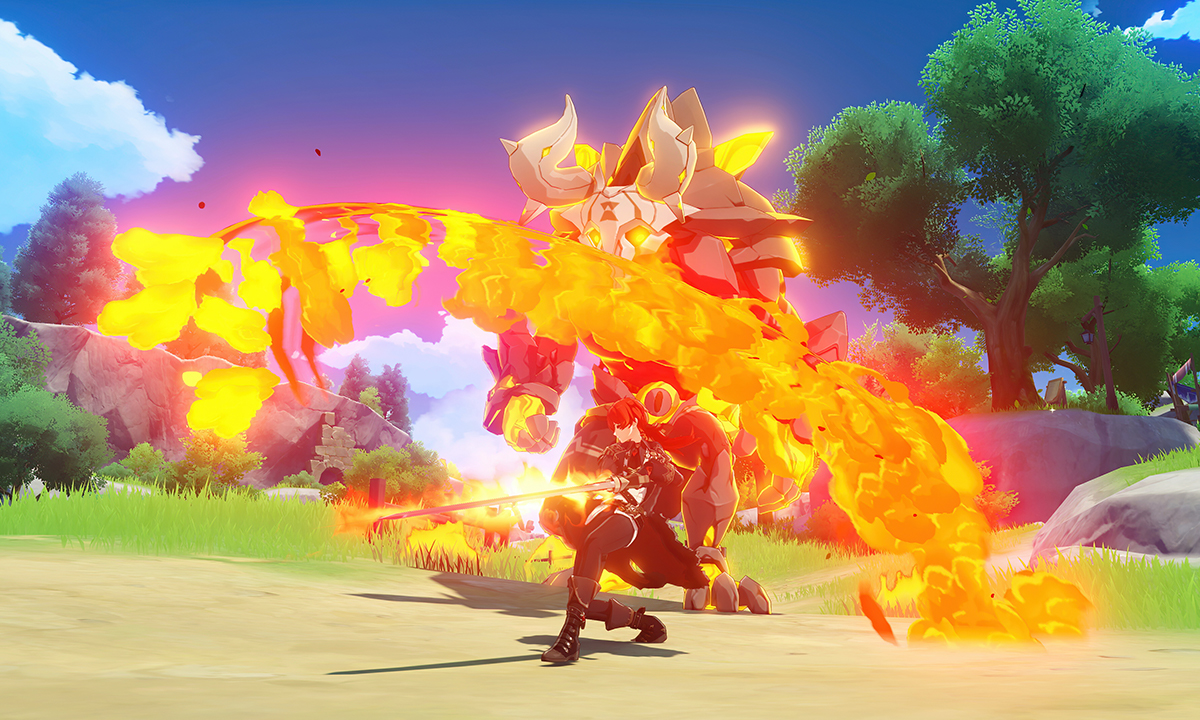 I can list off a few other minor gripes I have with the game—it reuses a specific kind of puzzle far too often, and I encountered some sporadic bugs with the voice lines—but these are, as I said before, minor. Taken as a whole, I have come away impressed with Genshin Impact; exploring the gorgeous, expansive world is a joy, and while the story and characters can be rather hit-and-miss, I’m nonetheless drawn in by their general charm and intrigued by their long-term potential. This game may have taken people by surprise at its release, but its presence will likely be felt for years to come. 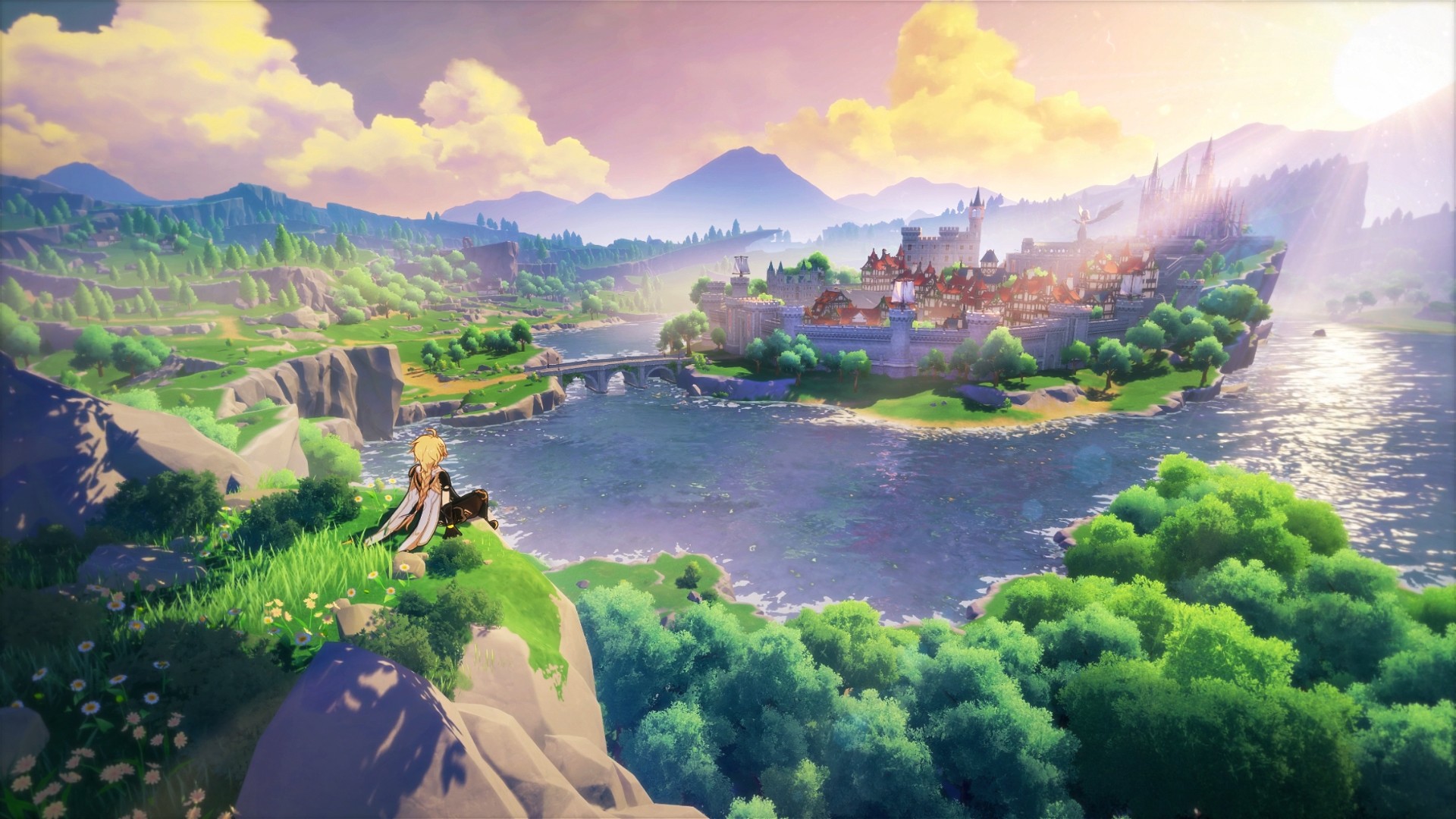