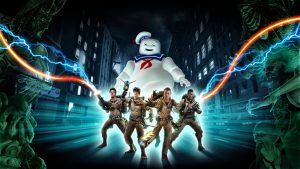 Remastering Ghostbusters: The Video Game was quite the task, one that Saber Interactive sought to carry out to completion. Due to connections with John Melchoir, the original producer of the game, it was easy for them to start this tedious process. With the original developer, Terminal Reality, out of business, and Vivendi Games’ acquisition of the original publisher, Atari, Saber jumped through an astounding amount of hoops on their journey, including managing to get permission from Sony and Dan Aykroyd to remaster the game. On top of all of this, they still faced more troubles,and the full story can be read here. In this review, we’ll be taking a look at how well the game was remastered and if it’s a success, or if this one is better left in the containment tank. 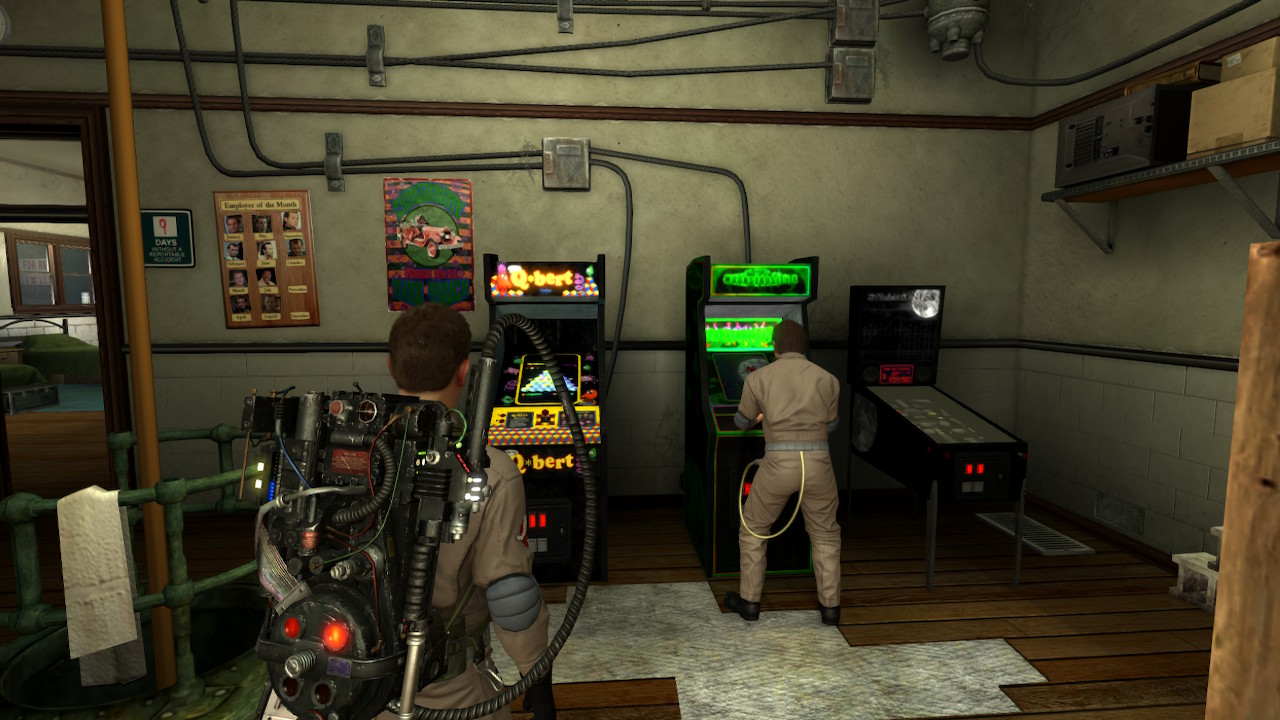 Violence: Ghostbusters: The Video Game Remastered features a lot of ghost-hunting, wrangling, and capturing. These acts themselves aren’t too violent, more silly and chaotic. What’s most violent, though, is the various storylines that lie behind some of the specters you are tasked with trapping. Some of the villainous ghosts have committed grizzly murders. But nothing is ever explicitly shown, only explained. 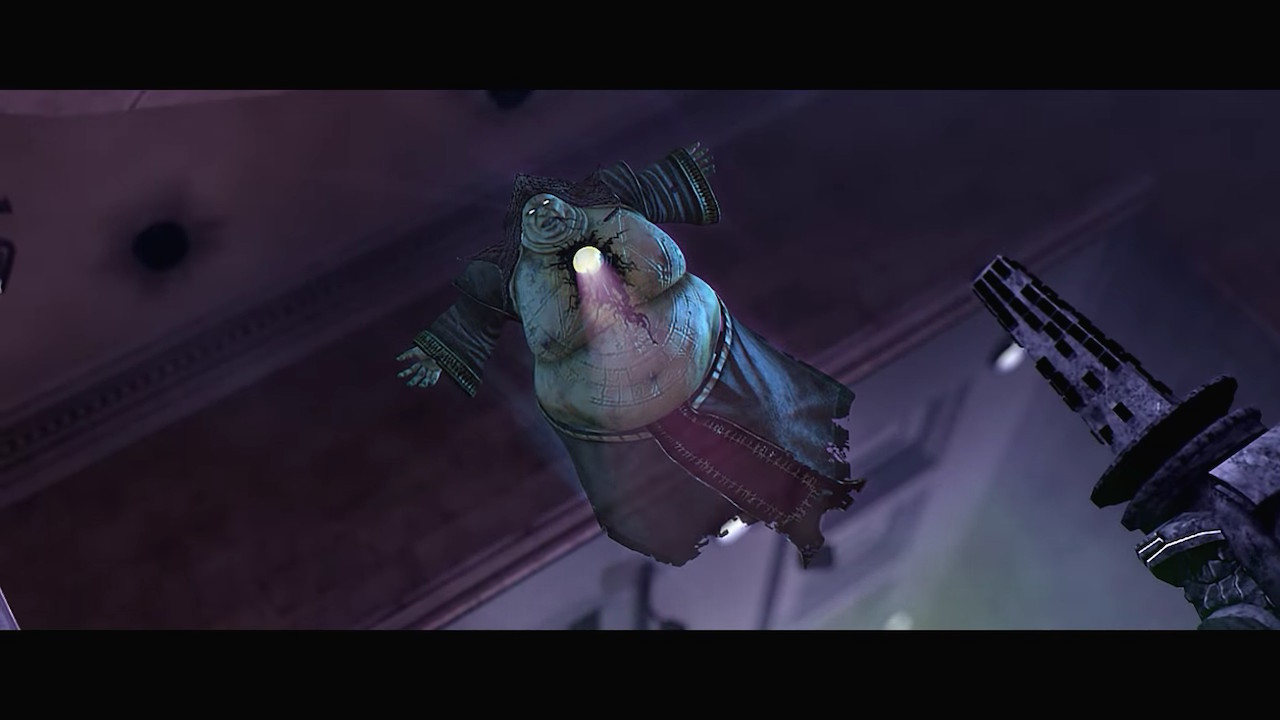 Spiritual Content: Ghosts are spirits and they are very present in this game—hence the name, Ghostbusters. The game describes phantoms as shadows of people who lived in the past who never were able to rest due to a crime or atrocities committed against them them. There are also some spooky moments in the game when sneaking around hotels, libraries, and other buildings looking for these scary wraiths. 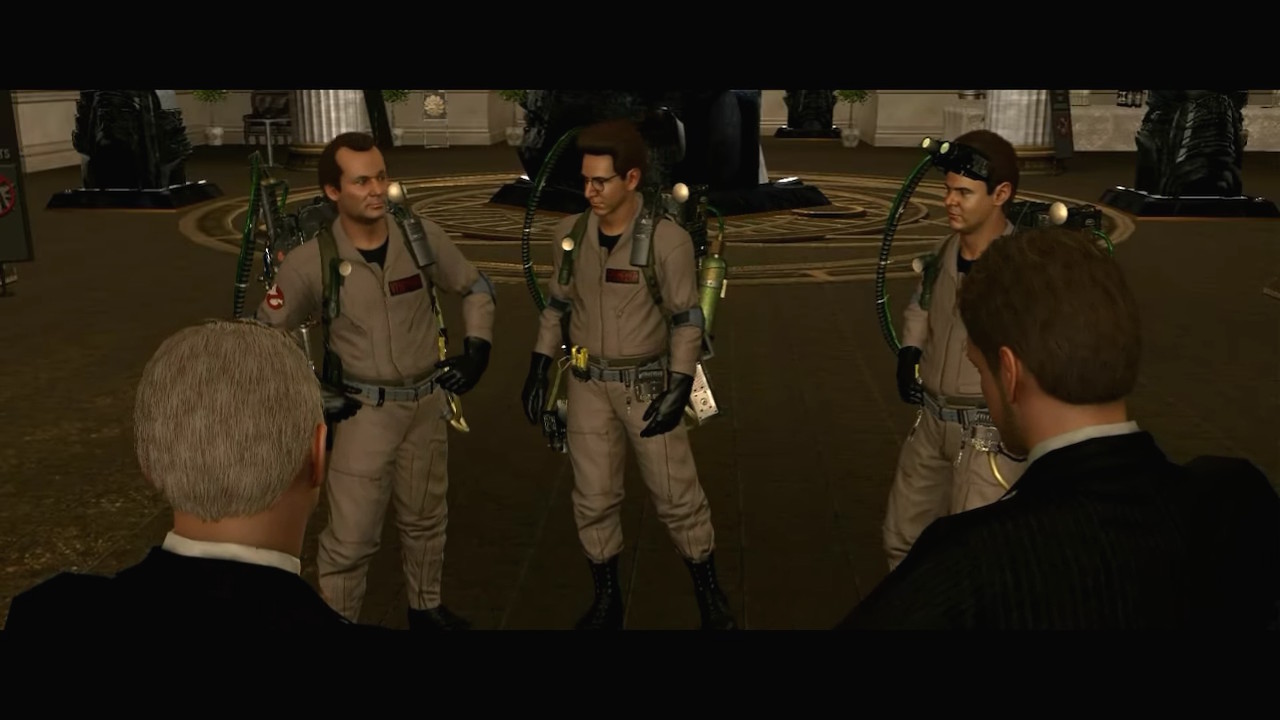 Who ya gonna call?

Earning itself a decent score in the past, Ghostbusters: The Video Game has been remastered to the welcomed surprise of fans of the original movies. The entire crew is back, including Bill Murray, Dan Aykroyd, Harold Ramis, and Ernie Hudson, with their cinematic characters in the actual game. The story was penned by the same actors Aykroyd and Ramis, claiming that the game’s premise was actually the idea they were going to make into Ghostbusters 3. The game played basically like a movie—a fun and theatrical experience, now remastered. 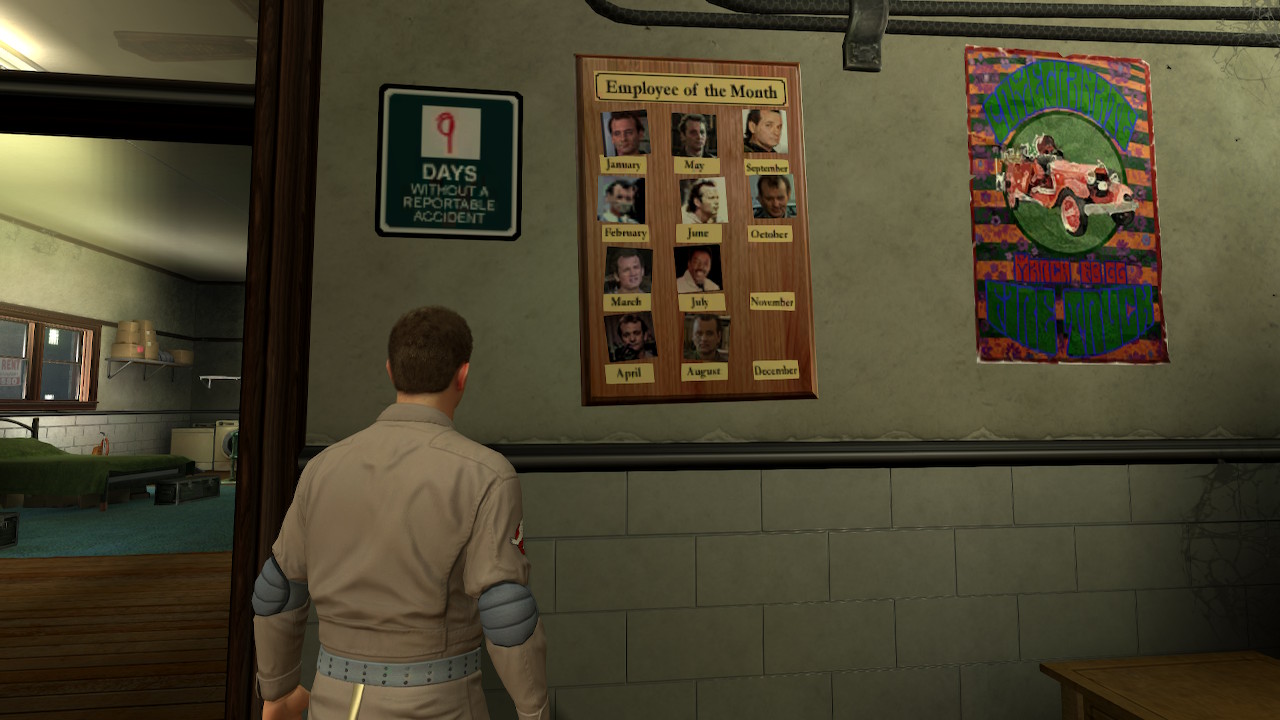 Like the original, Ghostbusters Remastered plays exactly like its predecessor. The player takes control of a rookie who goes gallivanting around with the original Ghostbusters crew, including Peter Venkmen, Raymond Stantz, Egon Spengler, and Winston Zeddemore. Shandor, an evil architect from the 20th century responsible for summoning Gozer  (Ghostbusters, 1984) and Vigo (Ghostbusters 2, 1989), comes back to haunt the ghost-busting crew, this time stronger and more powerful than ever. You’ll tour 1991 New York City chasing after specters who are terrorizing the city once more. Human adversaries include an old rival, Walter Peck, who seeks to shut down the Ghostbusters for good, again. When this game came out, I was beyond excited. I had it on the PS3 (still do, I think, somewhere in storage), and largely enjoyed it. It was a treat and a gift to fans of the movies, and yet, it seemed to fall on the wayside, becoming a hidden gem of a game. With this remaster, perhaps it will gain some recognition that it deserves. 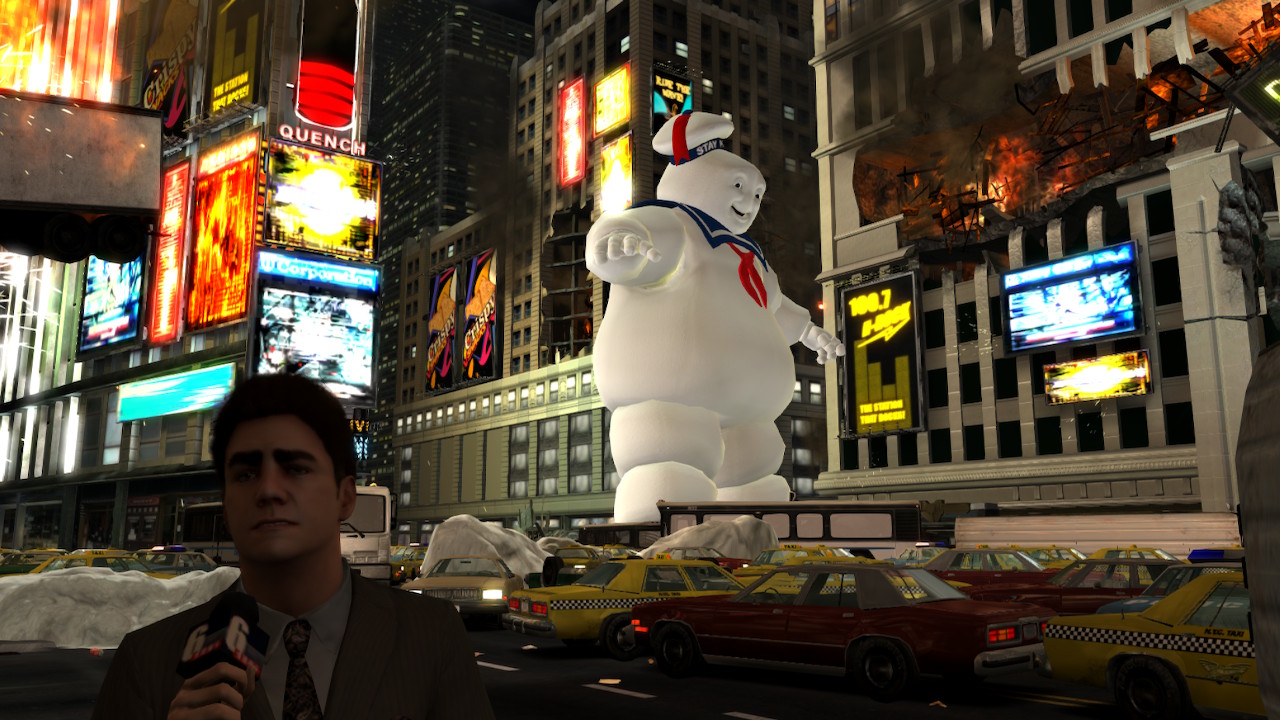 Yet, unlike the original, it is missing the mulitplayer feature, which would have been great on the Switch, since there are two Joycons. On the original Wii version, the game had offline multiplayer, with the ability to play missions cooperatively. A feature that lets two friends hunt down ghosts together? That would have been a great addition. Despite its absence, Saber has stated that they are weighing their options and seeing how popular the game is first. My prediction? It won’t happen. 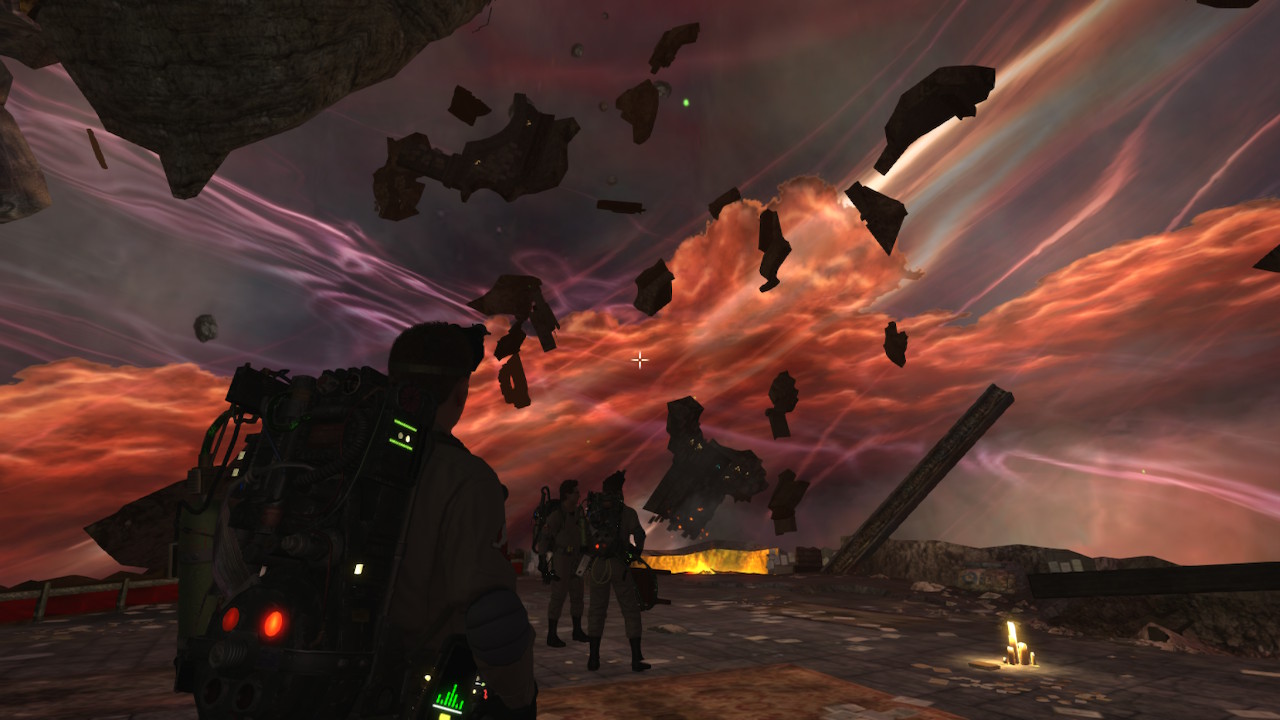 Inversely, the graphics make a great transition to newer consoles. I played the Switch version and the only gripe I have is that some cutscenes are grainy in docked mode, but in handheld mode, everything is smooth and crisp. Recently, a patch was announced to fix this, with a specific patch for the Switch being released soon. 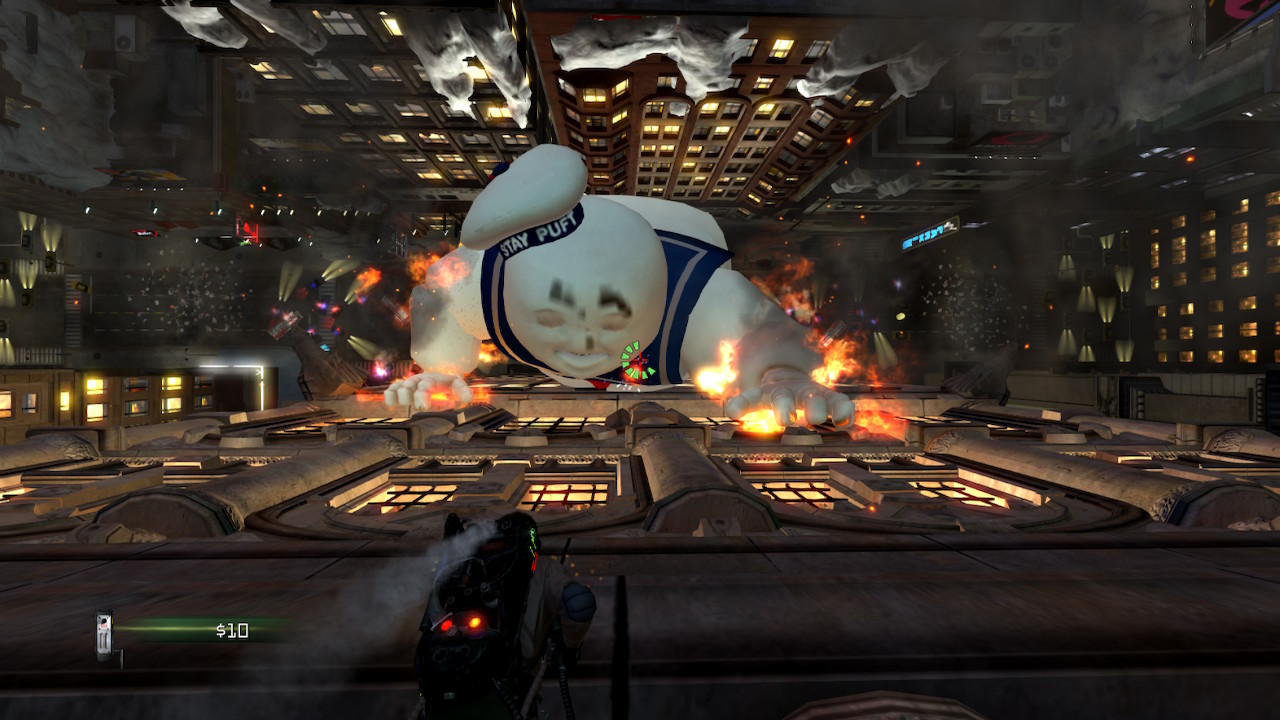 Speaking of the Switch, it is tough and annoying playing in handheld mode. With controls made specifically for a Dualshock or Xbox controller, the way the Joycons’ triggers are positioned will end up hurting your index fingers after a while due to strain. I ended up frequently docking my Switch and switching to a Pro controller instead. I’m sure PS4 and Xbox One players did not experience this type of strain. I recommend playing on a Pro controller. 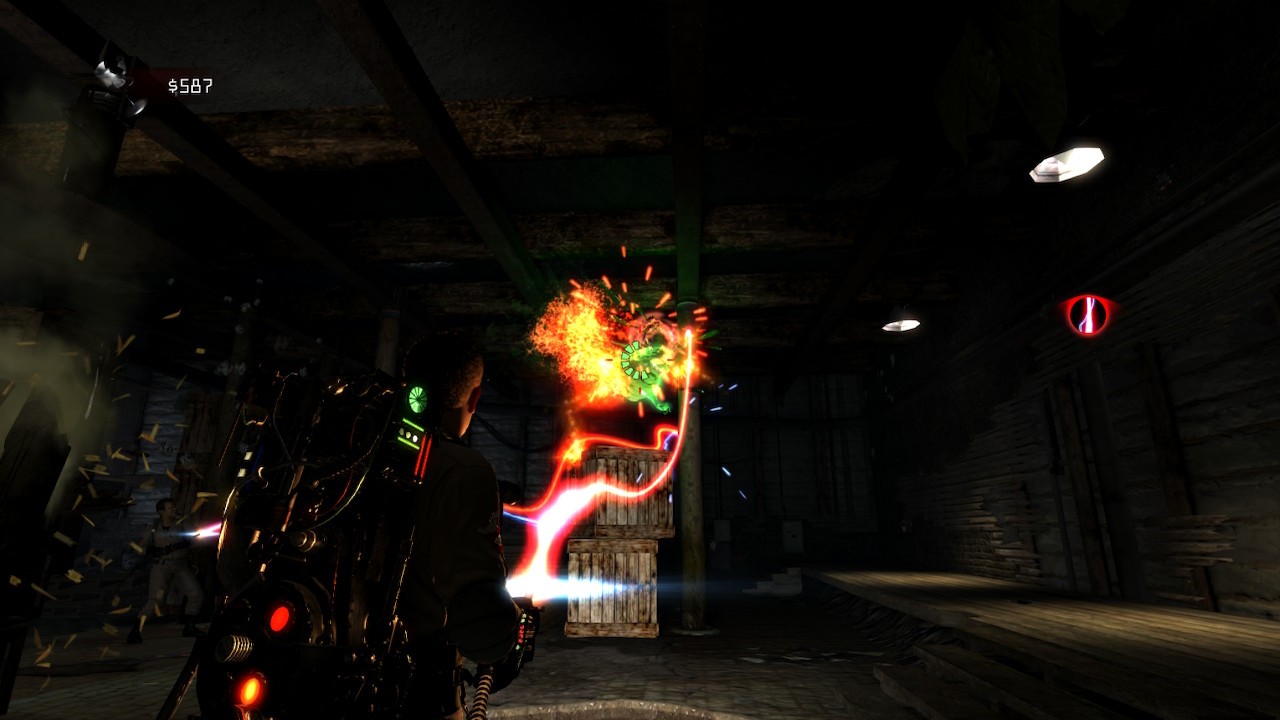 Pointing and shooting can be a real strain on the hands. Play in docked mode.

Speaking of controls, these also made a great transition over to current consoles. Switching proton streams is simple and the point and shoot mechanic is just like the original. But it seems that all the problems of the original transitioned along with the remaster. Pointing and shooting streams is a little slow and can be frustrating, especially when chasing down swift ghosts. Yes, there is a different stream that can be used to slow them down, but moving the camera around and aiming can still be annoying to coordinate. Again, this is near impossible on the Switch in handheld mode due to the spread of the joysticks on the joycons. Play in docked mode.

As far as the sound and effects, you’ll hear clever one-liners from the whole cast, with Bill Murray always complaining about the ghosts or hitting on the female characters you encounter. The soundtracks add a spooky factor with its comical, yet eerie synth sounds. The game is basically fan service, with the number of movie callbacks it has within. 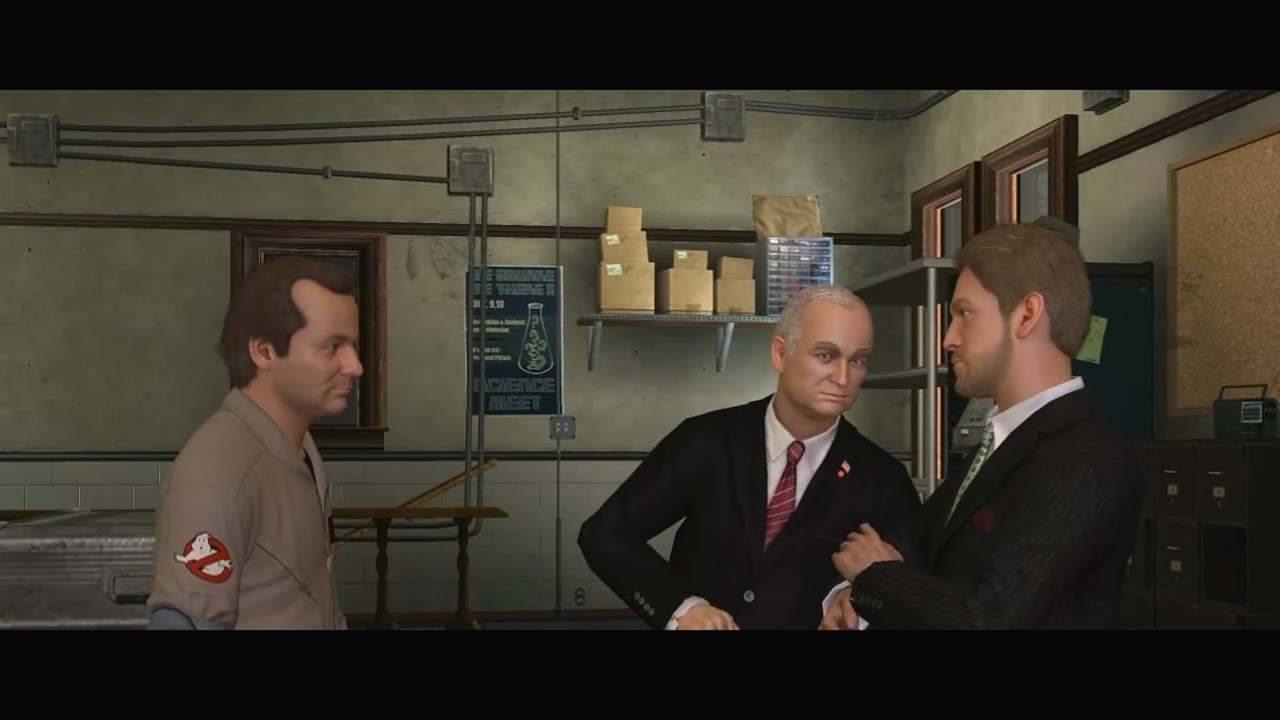 What is it about Bill Murray that makes him so dang funny?

As far as remasters go, I expected the same game with updated graphics and that is what I got. But with added power in new consoles, new features could have definitely been added, especially co-op. Many remasters add new modes and Ghostbusters Remastered could have done the same. Even so, I was not disappointed.

I recommend Ghostbusters: The Video Game Remastered to fans of the original game and fans of the movies. Even with the multiplayer option absent, it’s still a great singleplayer experience that can be fun to watch as much as it is to play. Those who find and purchase this game will already know what they’re looking for and will not be disappointed with the end result. 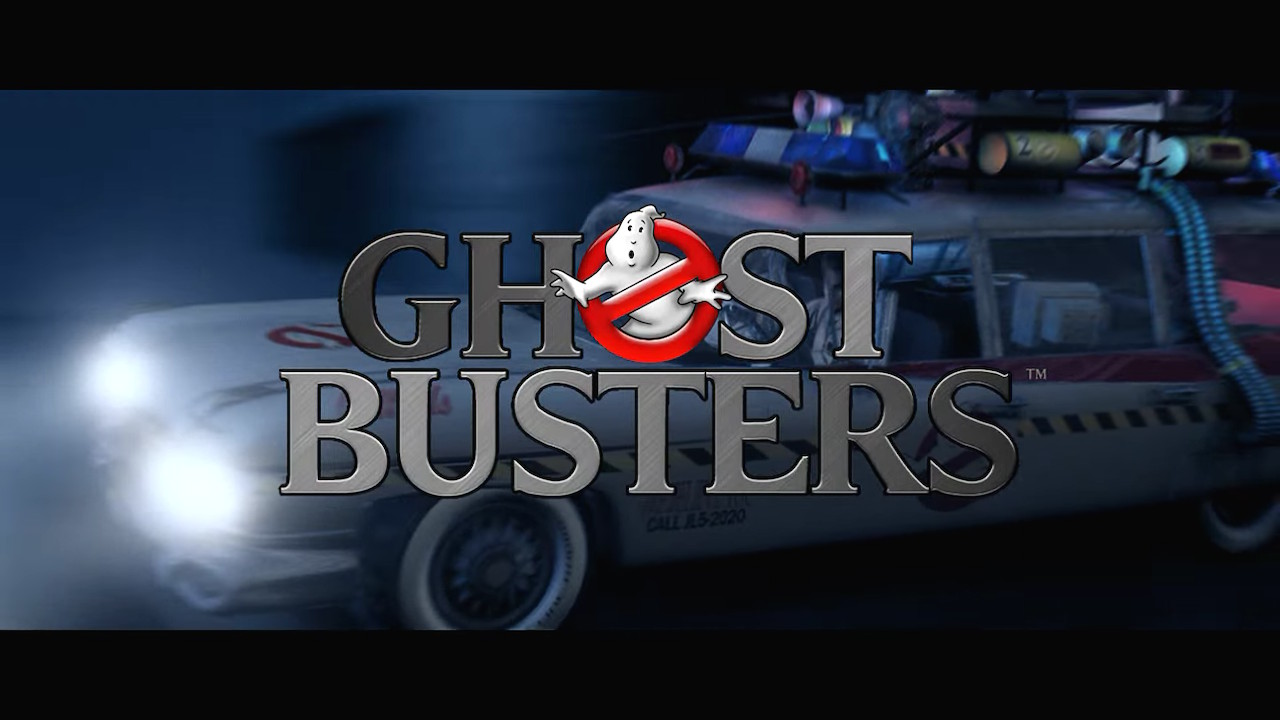 “We’re ready to believe YOU.”

I recommend Ghostbusters: The Video Game Remastered to fans of the original game and of the movies as it is fan service at its best.