I’m a sucker for a strong visual style, and that’s certainly what drew me to Going Under. The bright, modern aesthetic perfectly matches the lighthearted and satirical tone of this wonderfully addicting game. This, combined with some hard-hitting messages about overwork, workplace misconduct, and similar job-related issues, makes for a fun yet thought-provoking experience that I will regularly revisit. 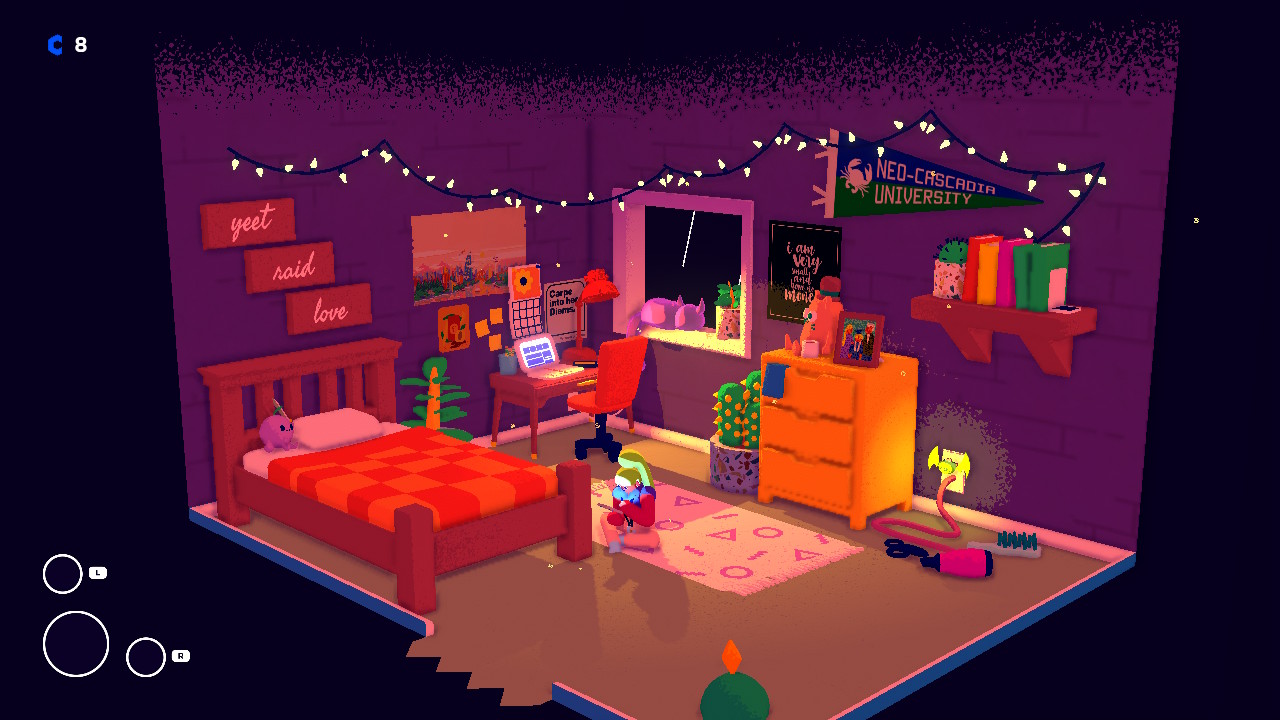 Spiritual Content: Winkydink’s main enemies are demons, and Styxcoin’s main enemies are undead skeletons. Upon completing these dungeons, you unlock a demon costume and a skeleton costume, respectively. Throughout dungeons, you can optionally take on “curses” from a vampire in exchange for some combination of items, skills, and weapons. These curses are nothing more than temporary status effects. Some jokes briefly reference magic.

Violence: A fair amount of the weapons are traditional ones such as swords, maces, and axes. You can also use skulls as weapons. However, there’s no blood when you hurt or kill enemies. Once you defeat them, they disappear in a puff of smoke.

Language/Crude Humor: The language is mild to moderate, nothing worse than d*mn, h*ll, *ss, or using God’s name in vain. There are some crude jokes, but little beyond toilet humor. 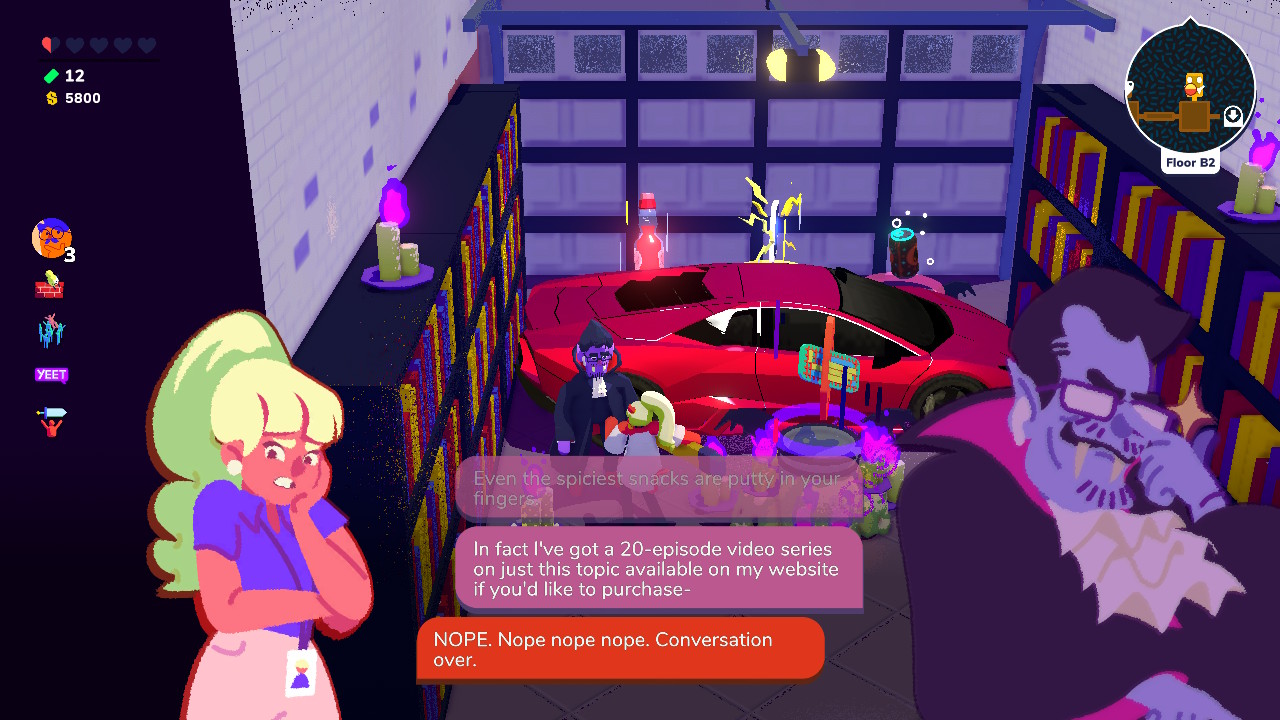 Sexual Content: Winkydink is a parody of a dating app company, so it’s filled with a variety of sexual innuendos and more blatant instances of sexuality. Innuendos range from an eggplant weapon to Twister mats on the floors. More obvious examples include a female shopkeeper hitting on you. One status effect you can inflict on enemies is making them “date” you. However, all this means is that they fight on your side for a limited time or until they die.

One mentor task involves “starting a polyamorous relationship” (giving two enemies the “dating” status effect at once). One mentor is homosexual and one is bi, but their sexualities are only briefly mentioned in passing. There are a couple of instances of non-graphic nudity, such as a poster of a shirtless demon or a highly abstracted nude statue.

Drug/Alcohol Use: Some weapons you find in the dungeons are what look like bottles of wine and champagne. One health-restoring item you can buy looks like a martini. However, no drunkenness is shown. Martini glasses can be seen on some of the tables in Winkydink, but they’re empty and cannot be used as weapons. 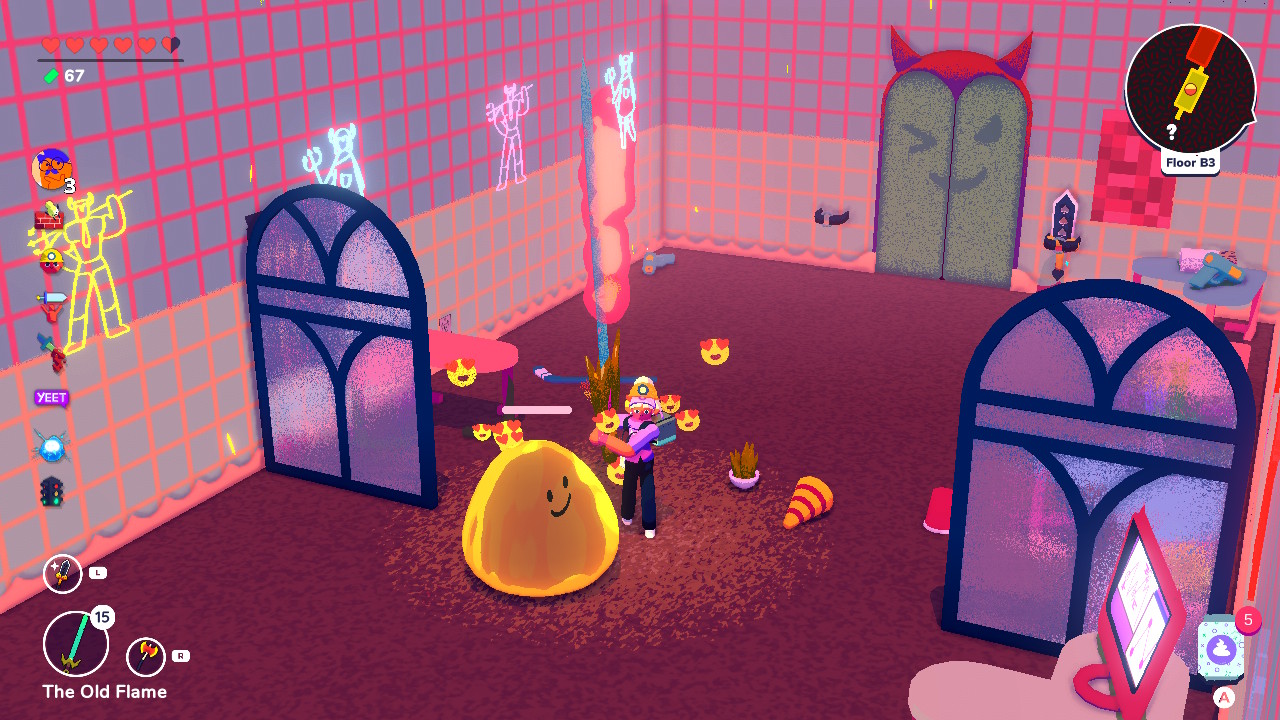 Other Negative Themes: One mentor perk involves that mentor stealing an item for you when you enter a shop.

Positive Content: One of the game’s main themes is bringing attention to and critiquing numerous workplace issues. These include overwork, being disregarded by your superiors, being silenced from addressing workplace issues, and so on. Your character objects to going down in the dungeons and killing enemies. She acknowledges that killing them is wrong, but her boss insists and she concedes. Many of the weapons are non-violent household objects, such as folding chairs or potted plants. 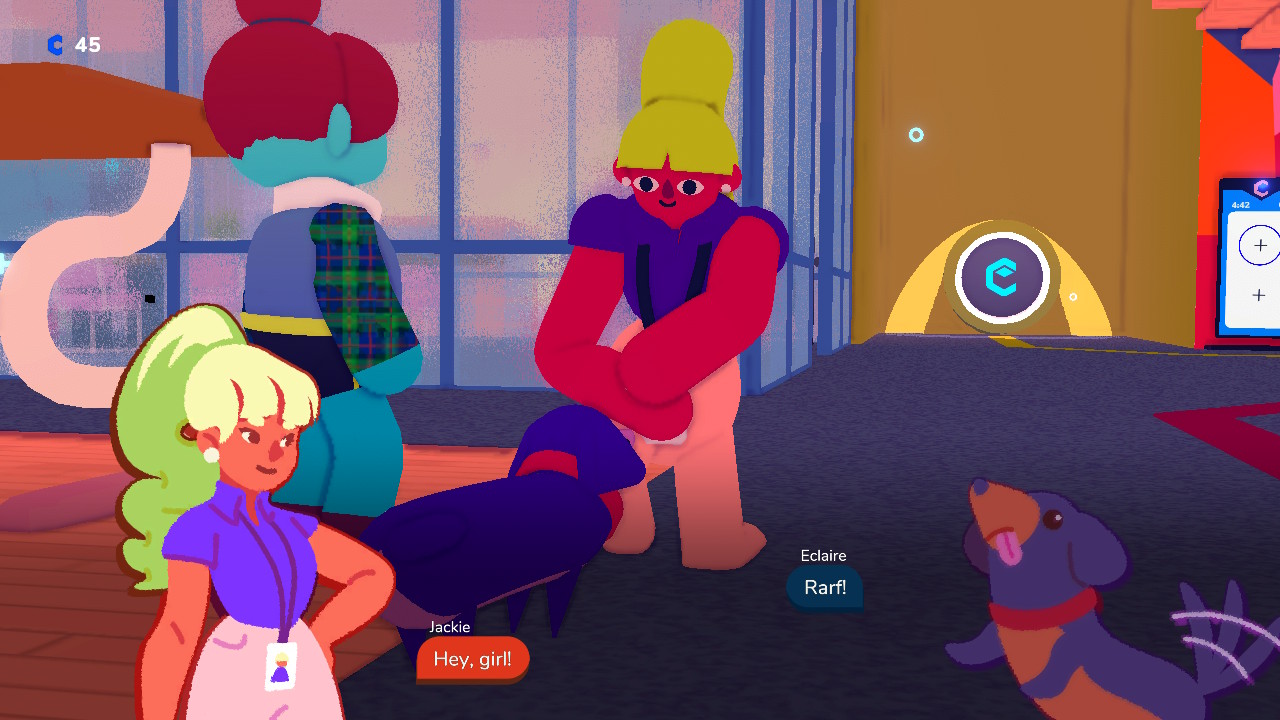 In Going Under, you play as Jackie Fiasco. She’s fresh out of college and she just got a marketing internship with Fizzle, a company that creates meal-replacement sparkling water… At least, that’s what she thought she was getting into. It turns out that her boss, Marv, just wants her to dive into the Going Underworld and obtain relics from failed startup businesses! It’s up to you to descend and conquer!

Now, if there’s anything you should know about me, it’s that I’m not typically a fan of dungeon crawlers. This is for a few reasons, but the main one is the usual dark and dank visual style. It’s just dull, uninviting, and it gives me no desire to explore.

However, Going Under completely flips this trope on its head. Even Winkydink—the least visually inviting dungeon, in my opinion—has a distinctive charm and playfulness which distances itself from the archetypal dungeon design. Getting over this stylistic hurdle allowed me to enjoy a dungeon-crawler in a way I never have before, and I really appreciate that. 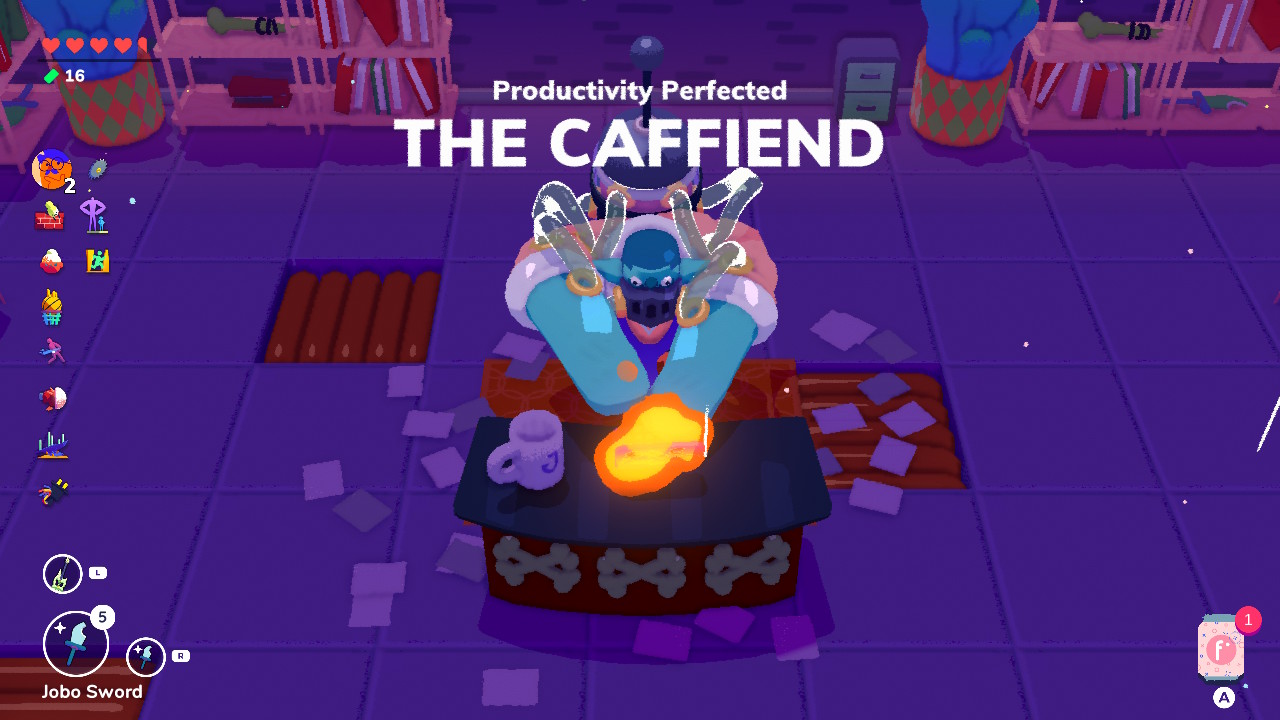 I’ll touch on the visuals again later, but they tie in with another thing I love about this game: it’s beginner-friendly yet challenging. As someone who isn’t used to this type of gameplay, I had a difficult time for the first hour or so. But as I played, I discovered new weapons or skills which better suited my playstyle. Even my 9- and 10-year-old nieces got in on the action, and they had a blast once they got used to the controls.

And even in the early hours, when I died constantly, I rarely felt like I wasted a run. My choices of weapons, skills, and perks always felt like they mattered, and nearly every time I ended a run with some sense of accomplishment. This is thanks in large part to skill endorsements and mentor tasks. Every time you use a skill, you gain some percentage towards that skill becoming endorsed. Once it’s endorsed, you can equip it before entering a dungeon, so you have it from the get-go.

This can make for some great combinations with different mentor’s perks, which are unlocked by completing tasks for them. These tasks range from using water to put out fires, to walking Eclaire the dachshund through a dungeon. Tasks are always fun to complete and some of them are dungeon-specific, giving you ample incentive to replay dungeons whose bosses you’ve already defeated. 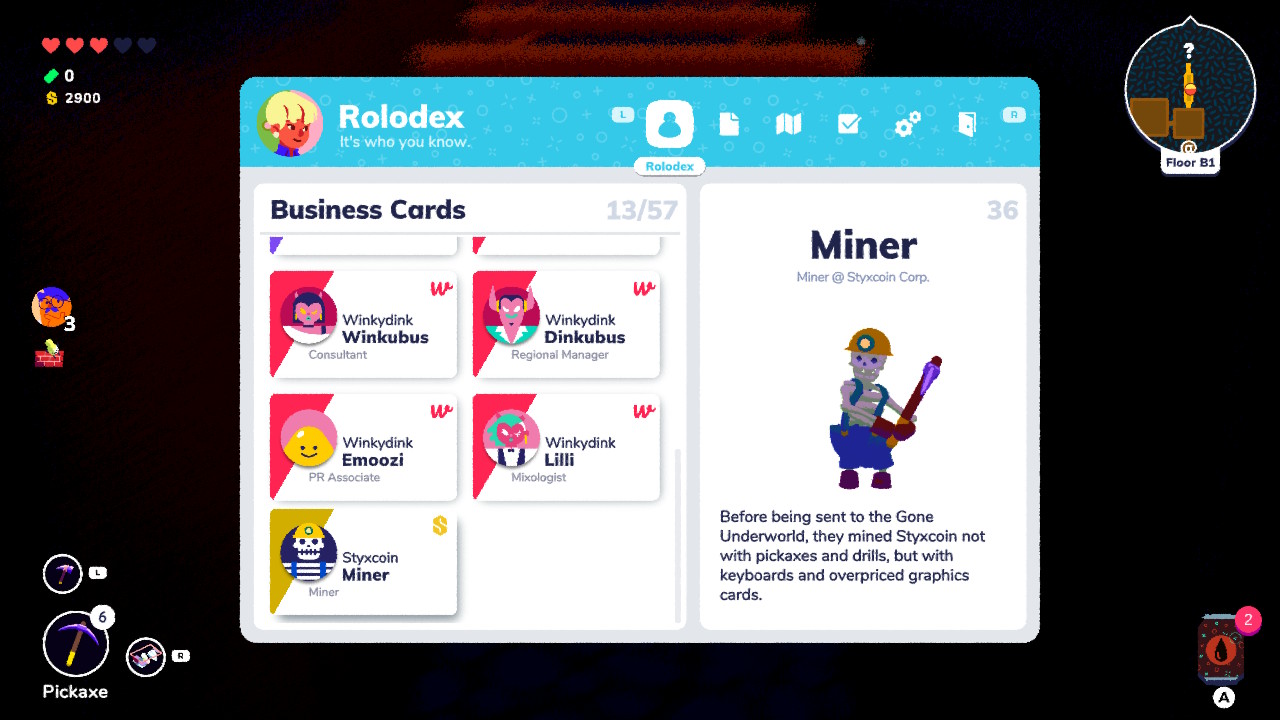 And the replayability goes far deeper than meets the eye. Without getting into spoilers, more lies beyond the three main dungeons. It continues to be fresh and challenging, and I can see myself pouring many more hours into unlocking every skill, outfit, and business card.

I could go on and on about how much I love the gameplay, but I need to get back to the visuals. They’re heavily inspired by the “corporate art style” which has been subject to scrutiny lately. However, it utilizes this style as yet another way to poke fun at startup corporations like the ones depicted in the game.

The music and sound effects also lean into this parody angle, with pop and techno influences that sound like they have been ripped straight from a product announcement video (albeit with more personality). Despite all of the companies in this game being parodies, they all feel genuinely fleshed out. If they weren’t quite so absurd, I could see them as real businesses. 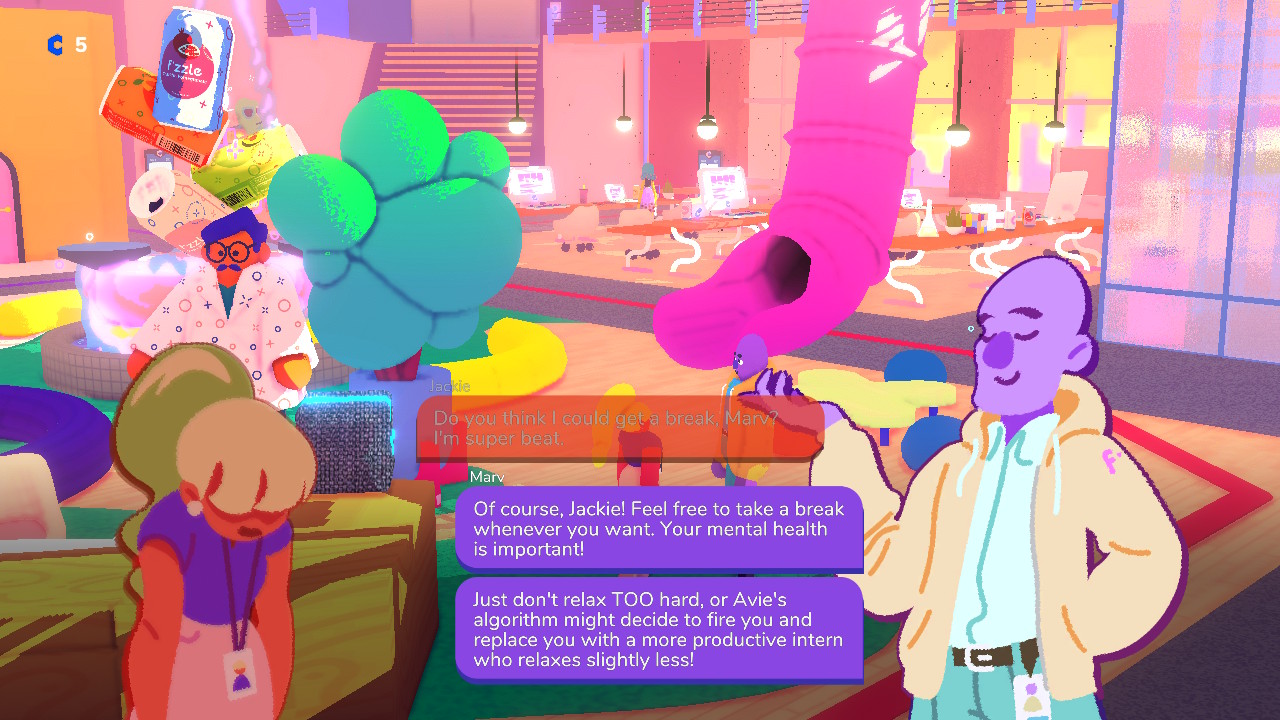 Another aspect that feels just as fleshed out is the commentary on real-world issues that’s scattered throughout the game. These critiques’ topics range anywhere from monopolistic corporations to cryptocurrency, and they’re communicated in a variety of ways. For instance, some of the loading messages for dungeons include phrases like “Glorifying Burnout” or “Denying Self-Care,” to subtly bring these issues to your attention.

More obvious examples, however, are scenarios where certain characters are completely disregarded by their superiors. You see how this affects their mental health, how this makes them feel devalued, and it’s honestly crushing. The characters may not be the deepest, but they depict real, relatable issues with biting accuracy.

This great addition doesn’t mean Going Under is perfect, however. I often sat through noticeably long wait times, occasionally the framerate dipped, and weapons and items on the floor would often glitch out. This glitching ranged anywhere from vibrating, halfway clipping through a floor or wall, to clipping through entirely. Issues like these didn’t significantly hinder my experience, but they’re certainly worth noting.

Going Under's satirical take on the dungeon-crawler has surprisingly layered gameplay and some great messages sprinkled throughout.