Gravity Ghost, an indie title from developer Ivy Games, promises a peaceful experience with physics-centric gameplay. Having originally been released on Steam 2015, it has now received a PlayStation 4 port, and with it, a chance to gain a fresh audience.  Despite its small scale, it has some seasoned industry talent involved in its creation on numerous levels, from gameplay to voice acting to music. Does this colorful little game have what it takes to make a splash? 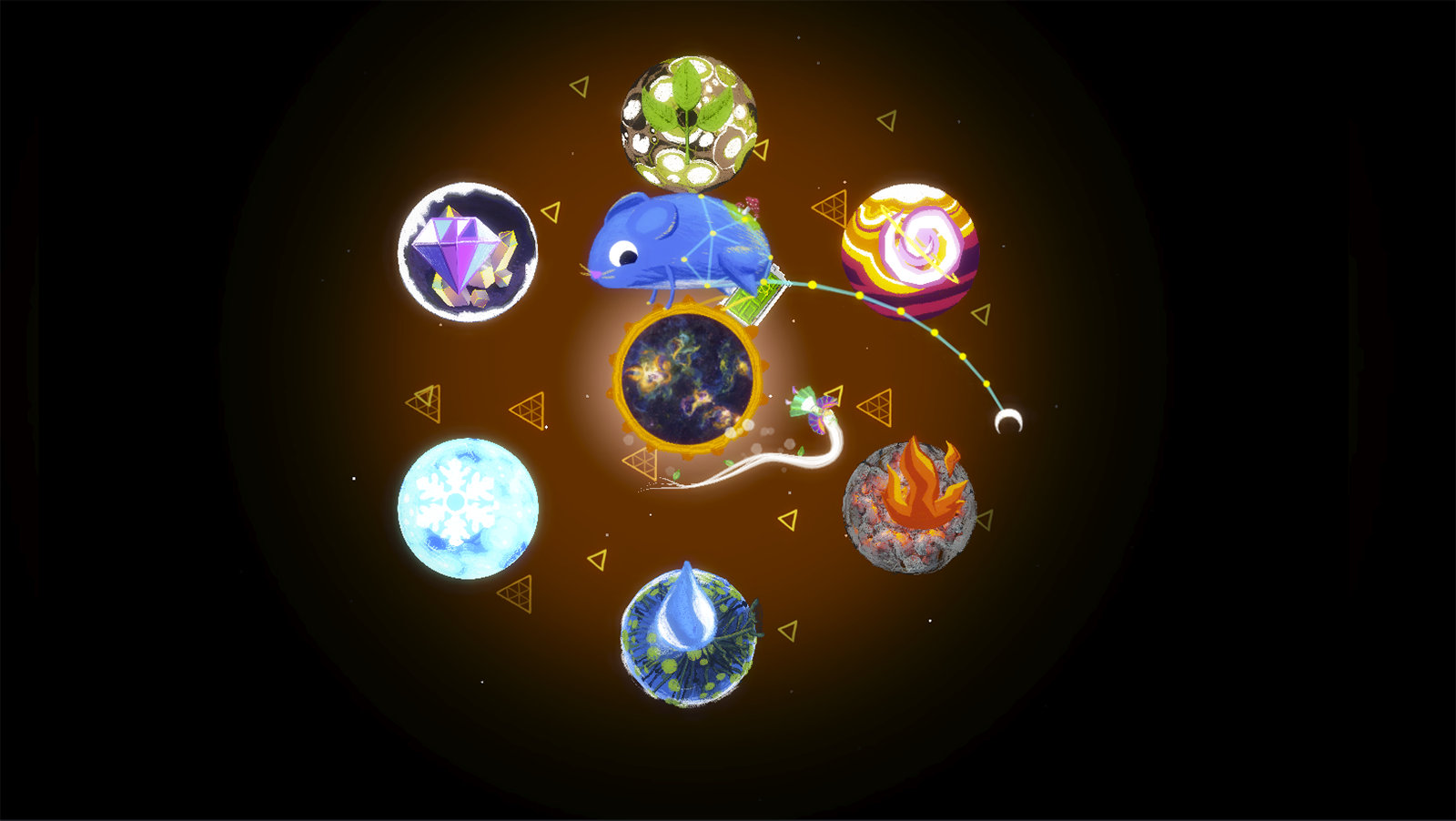 Violence: A gun is shown during a cutscene, and it is implied that it is used offscreen.

Spiritual Content: Gravity Ghost features animal spirits, and deals with issues of death, grief, and the afterlife. Astrological concepts are touched upon as well.

Language: While there are no curse words in the game, a few mild body/potty references appear, such as when the main character affectionately calls her fox companion “fuzzbutt” or when she tells an animal passing into the afterlife, “You’ll get used to not pooping.” 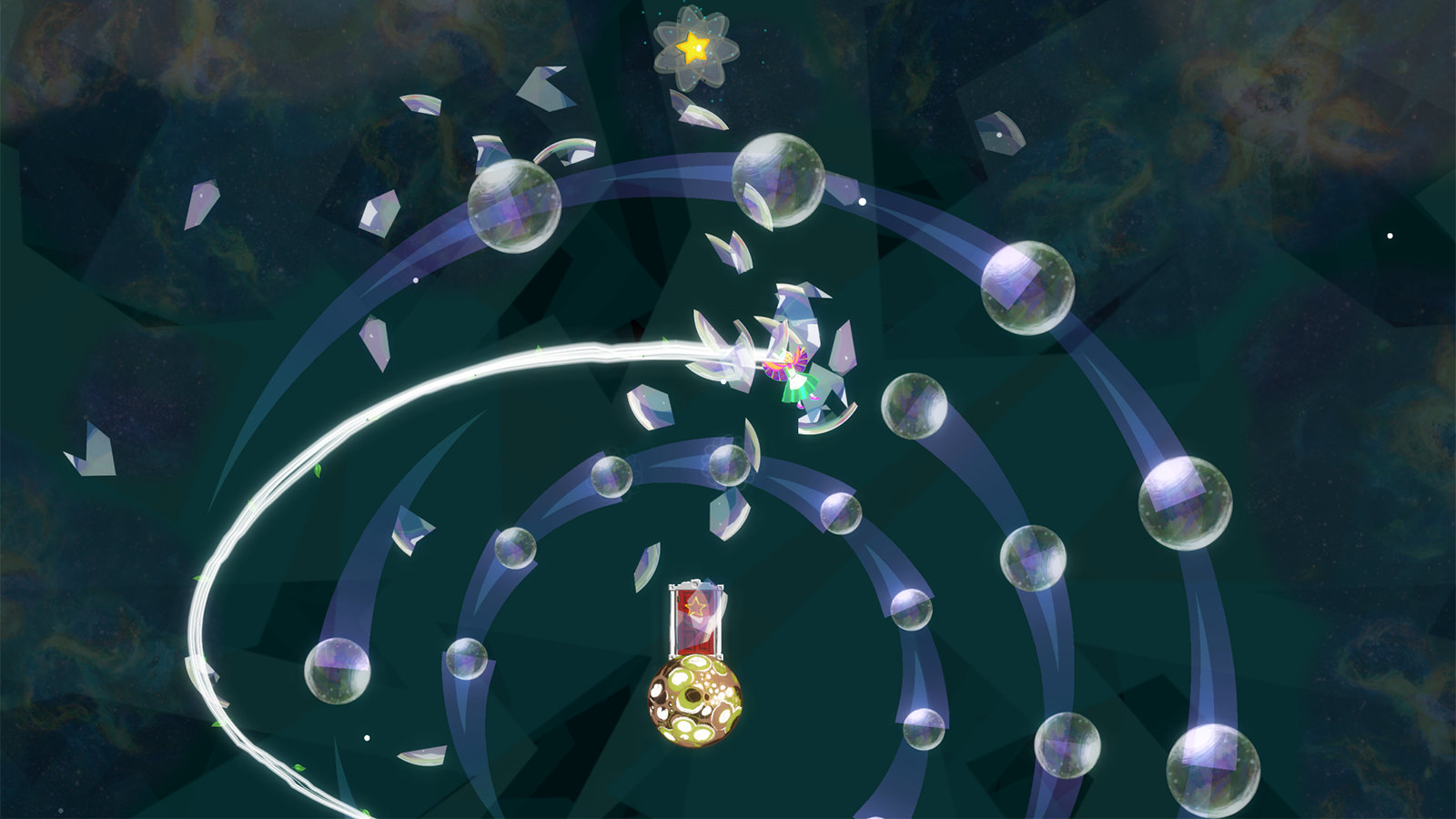 Gravity Ghost’s story centers around a girl named Iona whose family operates a lighthouse. The game gives you its narrative in pieces, and the story and gameplay appear completely unrelated until the very end during the twist ending reveal. It’s an ambitious approach to storytelling, but the result is that I have trouble connecting to everything that occurs through most of the experience. When the game finally connects the dots to reveal its poignant finish, it fails to stir any real emotion because it lacks proper buildup beforehand. It doesn’t help that since the story is so short, the characters don’t get enough time on-screen to establish strong, likeable personalities. 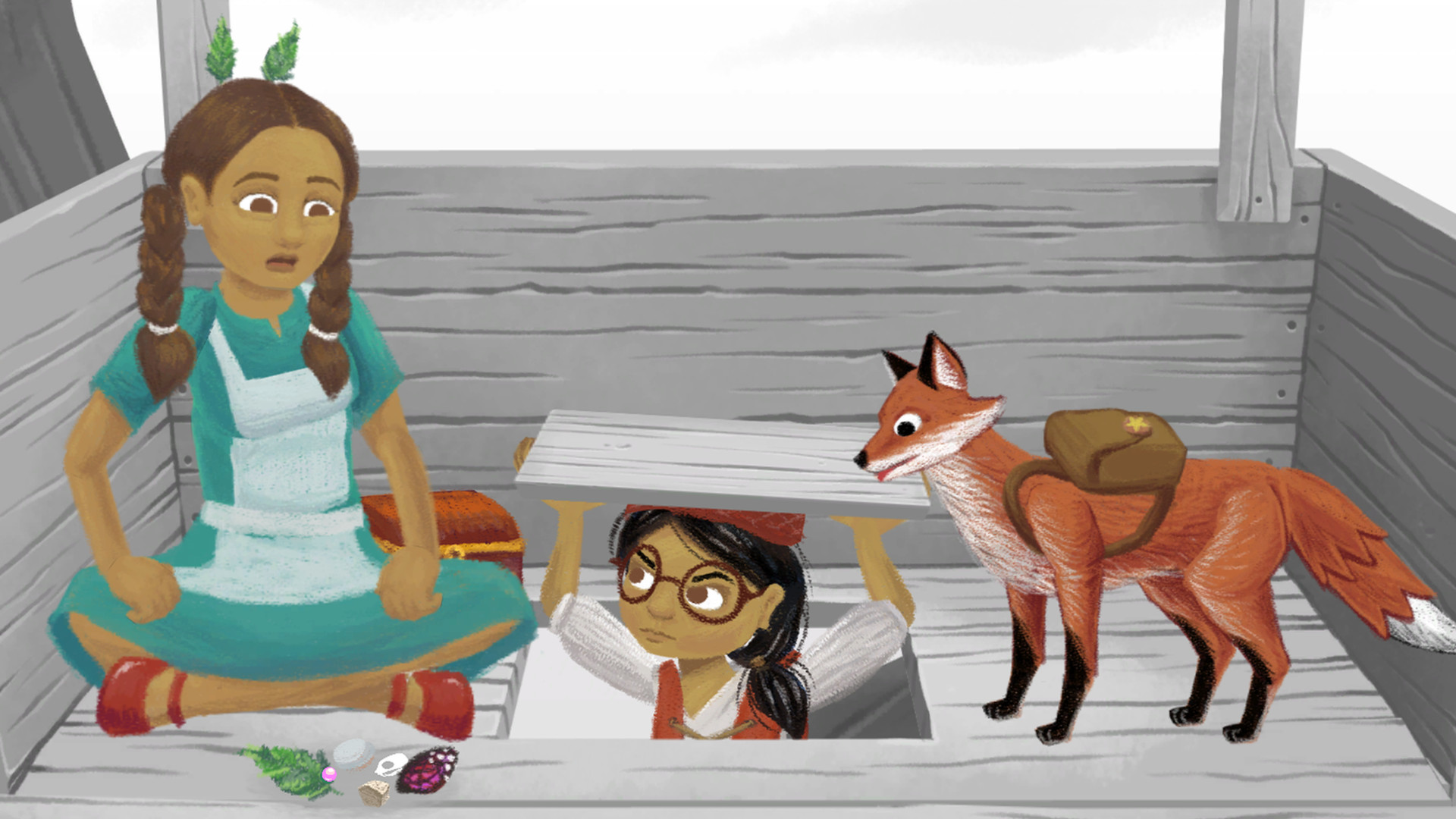 In terms of gameplay, Gravity Ghost is a physics-based game in which you, playing as Iona—a ghostly, much more colorfully clad version of her than in the cutscenes—must orbit around planets and collect objects floating in space. Each level contains a star and a closed door; to complete the stage, you must float to the star, which opens the door, and then return to the door to leave. Reaching the star requires you to float through space, using the gravity of the planets in the stage to float and bounce your way through the environment. It’s a clever concept, and built upon by another mechanic: elements. As you proceed through the game, you eventually collect elemental powers such as fire, water, and air; once you’ve collected them, you can use them to terraform the planets simply by walking all the way around them. For example, terraforming a planet into a fire planet will cause it to repel you further when you jump from it.

Some stages also contain either an animal spirit or its corresponding skeleton; by picking up a spirit in one stage and carrying it to its skeleton in another, you allow the animal to pass into the next life. Every time you do this, you unlock a story cutscene that plays when you finish the current stage; through most of the game, this is the only connection between story and gameplay. 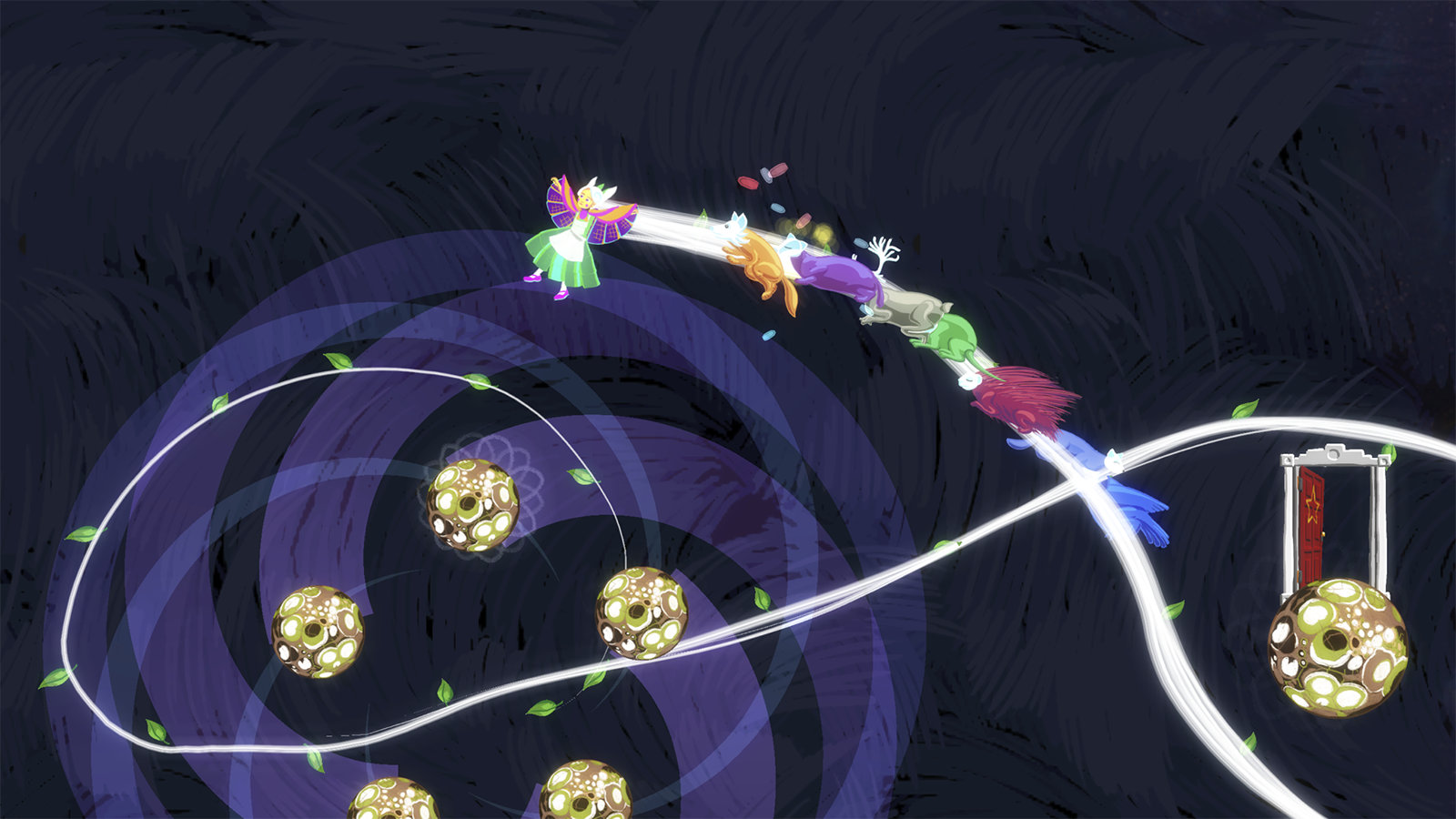 But another mechanic ties the others together: Iona’s hair. Collecting the flower pickups that appear in each stage will lengthen Iona’s hair; terraforming planets will deplete it, and if her hair isn’t long enough, she can neither terraform nor acquire animal spirits. Flowers are plentiful throughout the game, though, which means you almost never run low on hair length. On the off-chance that you do run short—such as the one time I spent hair terraforming a planet to the wrong type for the task at hand and had already collected all the flowers in the level—you can simply back out to the menu and start over, or recollect flowers from a level you’ve already completed and come back later. 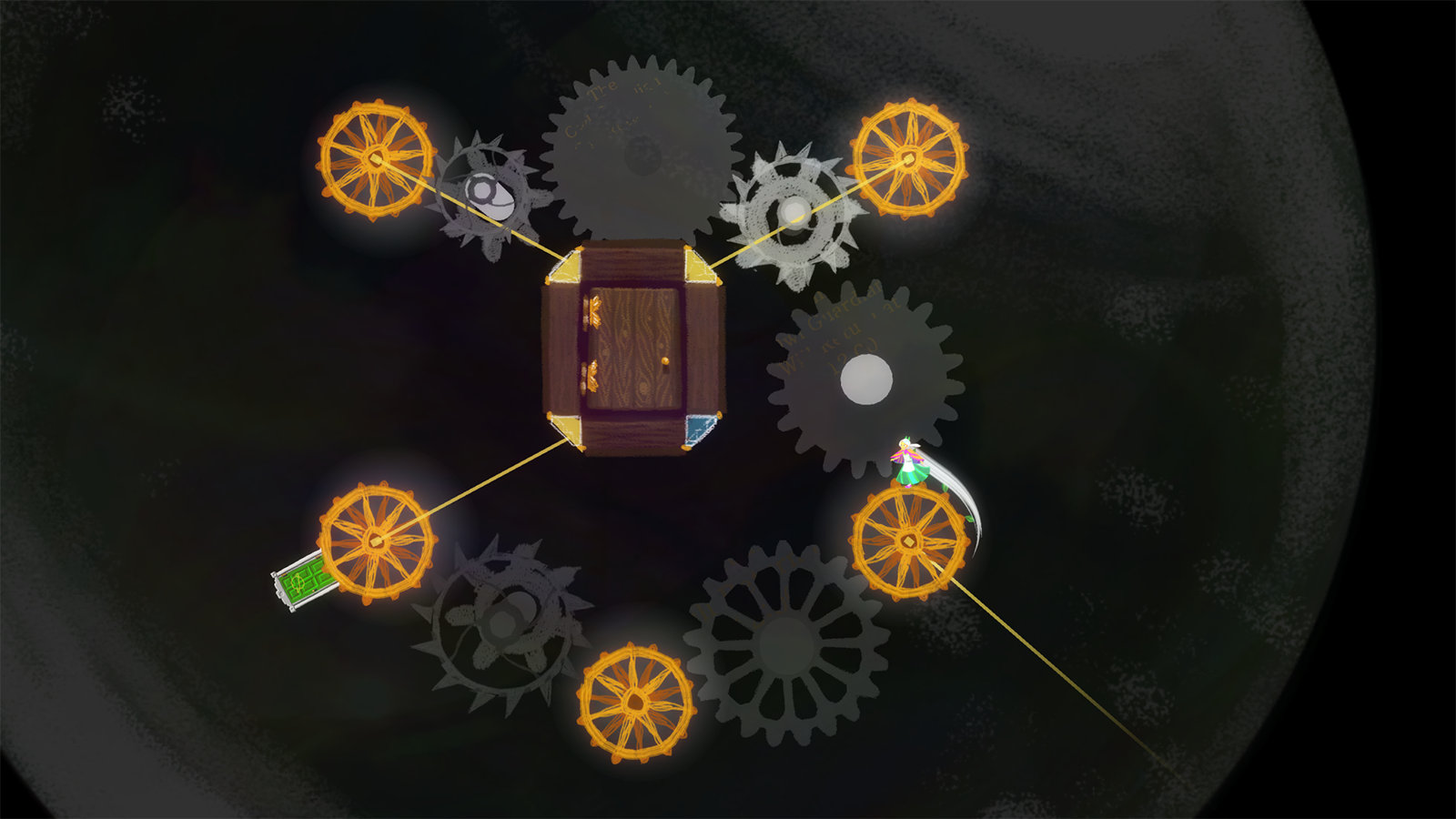 Gravity Ghost is remarkably easy; there are no “game over” screens and almost all the levels can be completed with minimal effort. Even as I approached the game’s finale, I still encountered levels that I finished in less than a minute. The only challenging levels are…the challenge levels, which do not need to be completed in order to experience all the story cutscenes. The game is clearly meant to be relaxing, with its focus not on deep mechanics, but on its gorgeous hand-drawn art and the playful nature of its gameplay. The pleasant soundtrack complements the art and gameplay as well. It’s just a shame that it fails to provide much depth in its level design, especially considering the game’s smooth and finely polished physics. 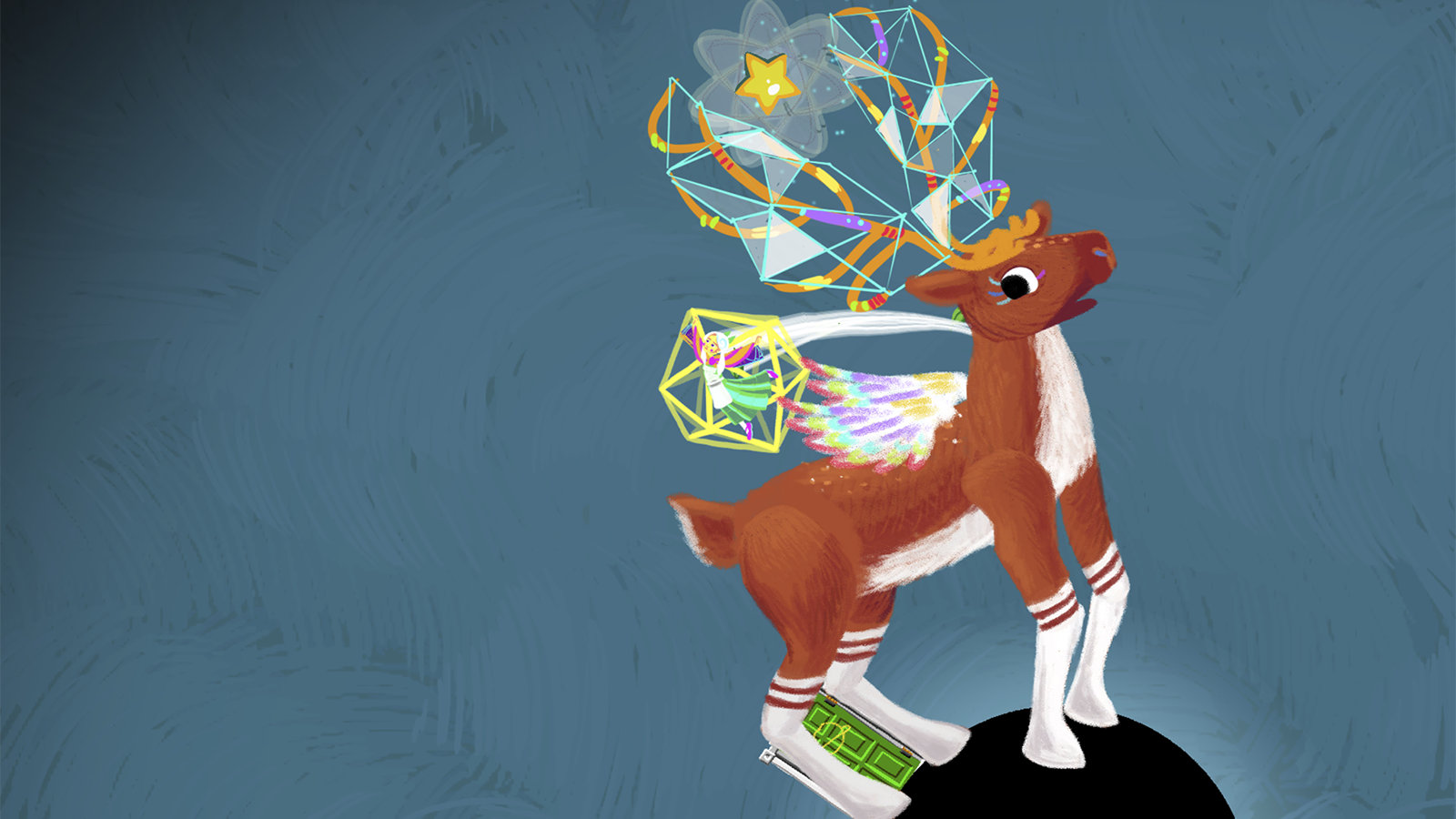 For those looking for a simple, low-stress game with pretty artwork and a soothing soundtrack, Gravity Ghost should fit the bill. On top of that, I imagine that for a young kid just learning how to play video games, this game may be ideal, though its themes prove themselves rather heavy, at least compared to the lightheartedness that permeates the rest of the experience. But for anyone else, it simply does not offer enough; the attractive aesthetics cannot paper over the shallow gameplay, subpar storytelling, overall short-lived experience.

Gravity Ghost provides a relaxing experience with some interesting gameplay ideas, but its lack of depth and poor storytelling keep you from getting invested.