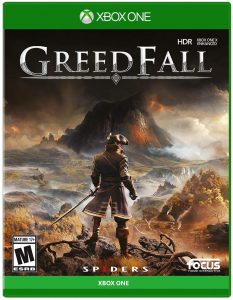 GreedFall is an ambitious RPG from developer Spiders, the makers of The Technomancer and Bound By Flame. Spiders hopes that this latest title will stand alongside RPG heavyweights like Bioware’s Mass Effect series and CD Projekt Red’s Witcher games. But can the smaller-budget GreedFall keep up with its AAA competition? 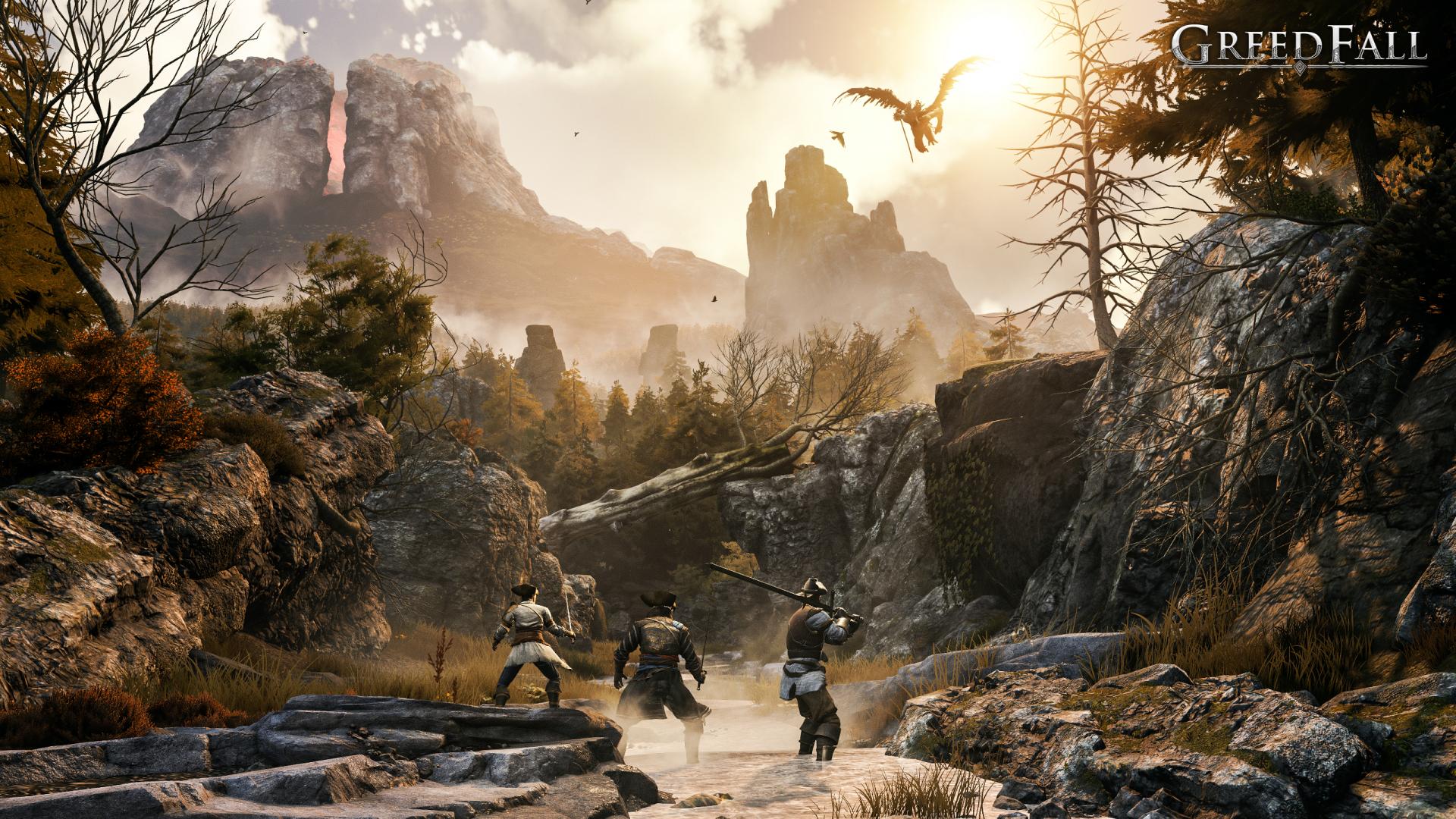 Violence: Violence is prevalent throughout the game, involving rifles, swordplay, battle axes, and other medieval-type weapons of war. There is blood minimal blood spatter present when human enemies are hit, but it’s not excessive or grotesque.

Spiritual Content: Religion plays a key factor of this game. One monotheistic faction that resembles the Roman Catholic Church have groups of priests called Inquisitors who employ torture in order to convert others to their faith. The Islanders worship nature, and there are hints of white magic and black magic. Demons are referenced, and some of the enemies’ designs appear demonic thanks to their protruding horns.

The brutality of the in-game church, torturing natives/pagans in the hopes of conversion, brings some uncomfortable comparisons to the real-life Christian church, which at times has used these same tactics. It’s a sobering critique, but while we mourn the sins of our spiritual predecessors and the damage they have caused, it’s also important to acknowledge the importance of (properly-conducted) evangelism. As Christians, Jesus sends each of us into an “unknown world” to baptize and teach: 19 “Go therefore and make disciples of all nations, baptizing them in[a] the name of the Father and of the Son and of the Holy Spirit. Matthew 28:19 (ESV) 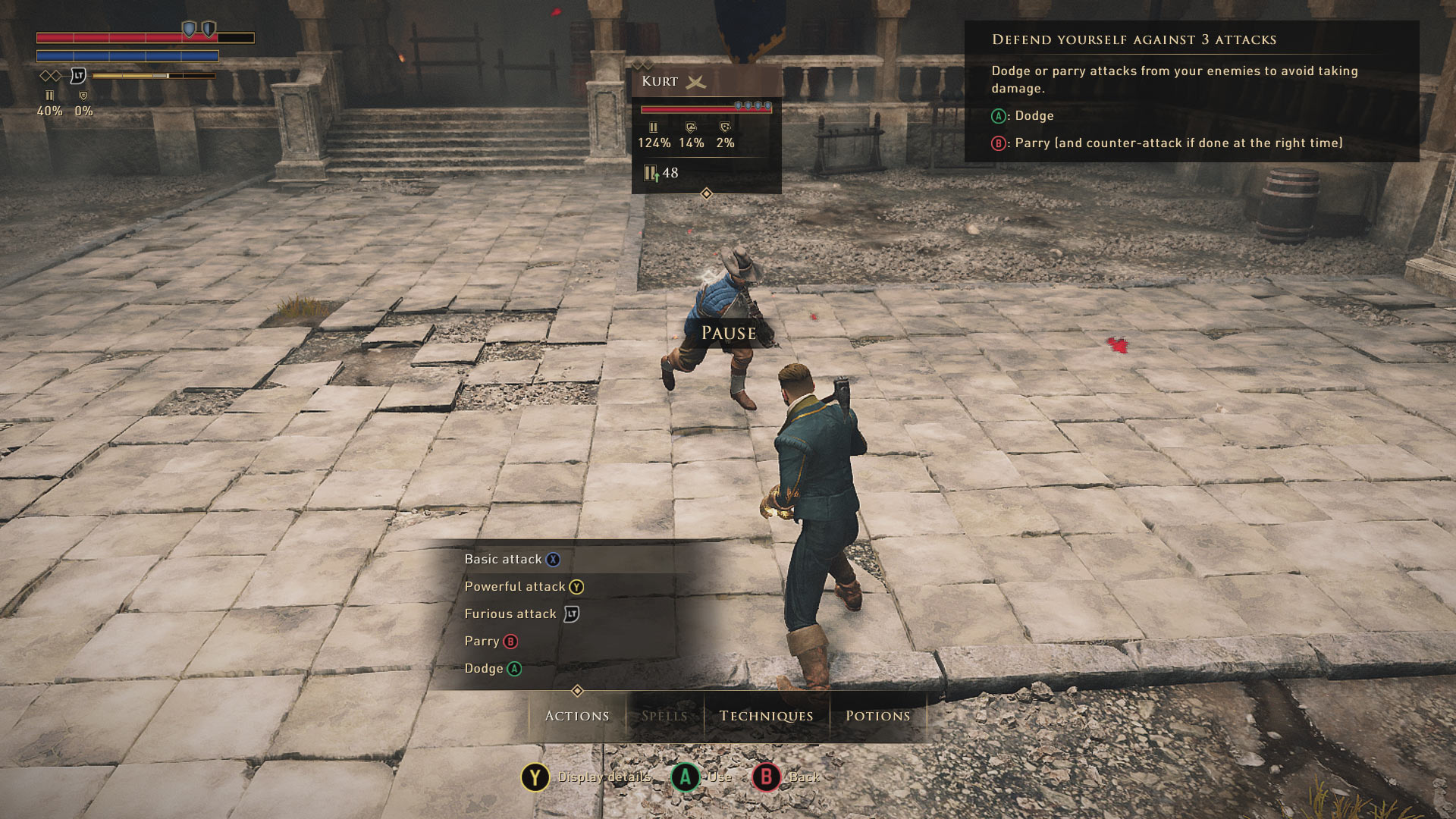 Sexuality and Alcohol: There is alcohol consumption at the local taverns and pubs, and these places also house prostitutes and brothels where is sexual favors can occur. Characters of the same or opposite gender can be romanced. However, there is no nudity or adult images shown throughout gameplay. 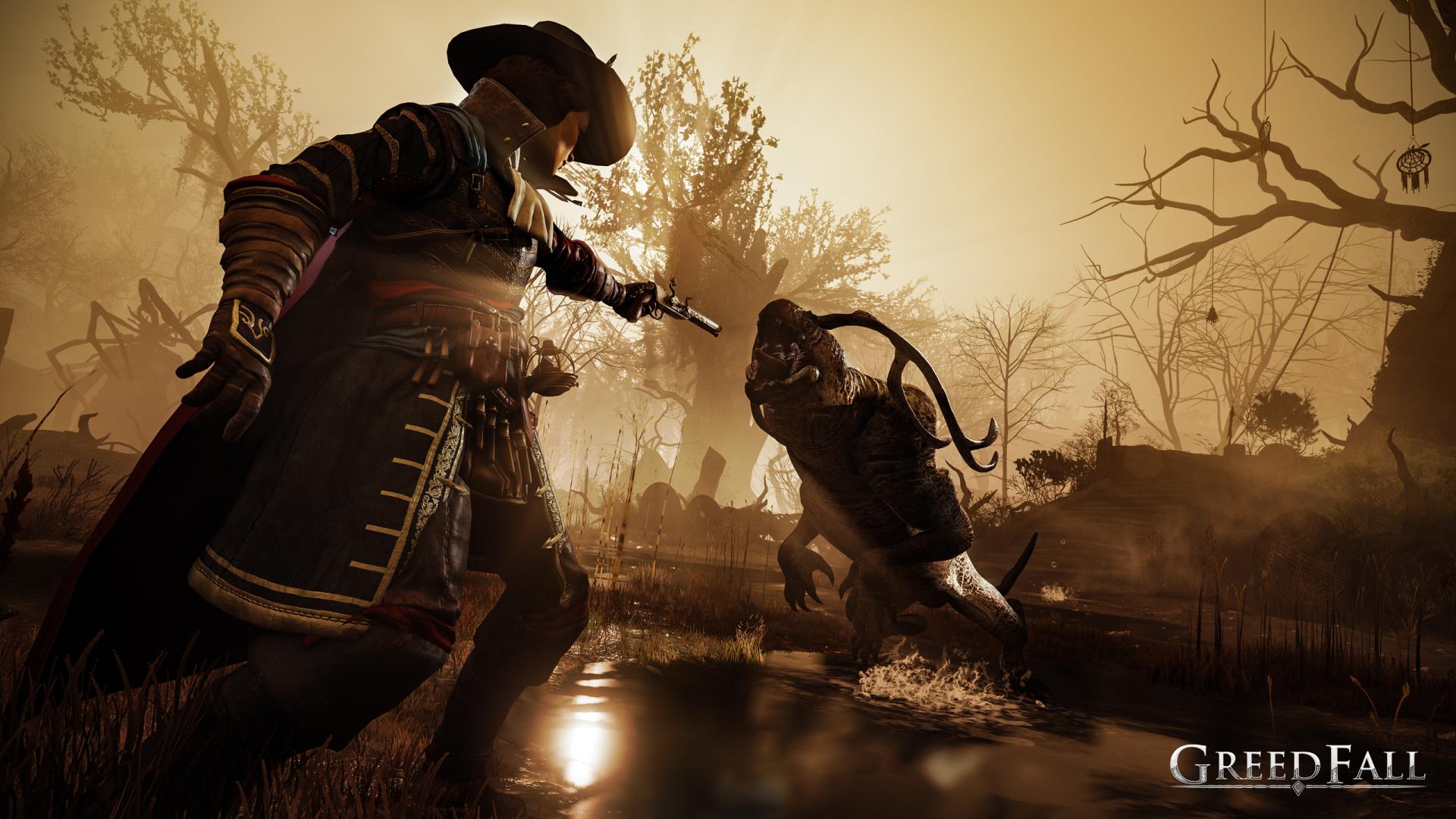 In GreedFall you play as De Sardet, the Legate of the Congregation and a diplomat from Theleme, his/her motherland. The Congregation’s goal is to gain partnerships, form alliances, and avoid conflict with the other factions on the island of Teer Fradee, namely the new Settlers and the indigenous people.

Teer Fradee is a newly discovered and mostly unexplored island. It is a new world full of promise, enterprise, exotic and dangerous creatures and magic, primeval religion, a potentially land that possibly holds the cure to the disease Malicor, a malady which means certain death to all who contract it, including members of De Sardet’s own family. The story of GreedFall is very good and manages to keep me interested for well over 60 hours as I explored, fought creatures, and performed side quests and loyalty missions. I found the cast—both the main and supporting characters—all to be likeable as they exhibited quality voice-acting.

Again, the story is basic: settle and explore new land, find a cure for disease, and avoid faction conflict. The game contains six factions, each with their own goals and ambitions and who often find themselves at cross-purposes with one another. Within these six groups are several loyalty missions, betrayals, military coups, and use of inquisition tactics as a means of conversion. This is where your companions come to play; each companion represents one of the game’s factions, and it’s important to complete companion tasks, otherwise their faction will not trust you or even turn hostile. I found the main protagonist (who I chose to be a woman) a joy to play, as her character arc is interesting and never too predictable or boring.  I also have my favorite companions. Kurt is a jerk, but the rest of the ensemble is excellent and fully realized. Spiders even went so far as to consult speech pathologists to help make the fictional language of the Islanders sound realistic.

Oftentimes quests can be completed in a multitude of ways, including diplomacy, stealth, or aggressive force. How and when you engage in combat is completely up to you, which is a nice touch. Furthermore, your companions can either aid or hinder dialogue choices. Relations between you and the Islanders may be poor, for example, but you have an Islander as a companion smooth over tense situations with that particular faction; alternatively, a companion from a rival faction might make matters worse. 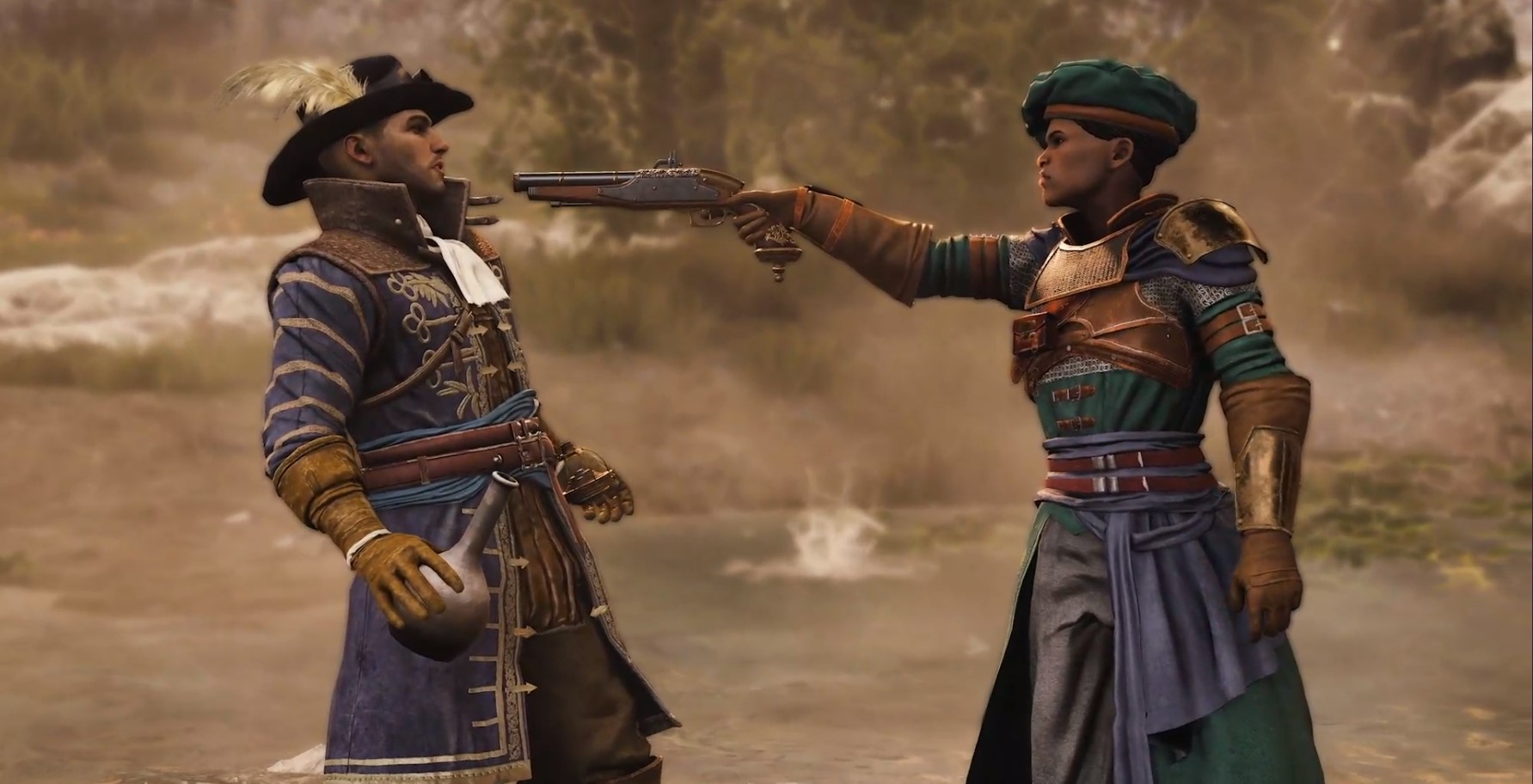 I love the top notch world design that Spiders has put into GreedFall. The world feels lived in; leaves and debris blow in the wind as you walk around the game’s lush forests and city streets. The game is more hub world than open world. However, once you are in the hub city, the map opens nicely. So while you may not have as much space as a Witcher 3 or Breath of the Wild, you still have massive areas to explore, secrets to discover, and hours of lost time, all accompanied by a beautifully orchestrated soundtrack. GreedFall also sports a robust crafting and weapon upgrade system. Hundreds if not thousands of armor and weapon customizations are possible. We are now in the thick of fall video game and holiday game release traffic, yet I kept coming back to GreedFall rather than Borderlands 3 and other “bigger” games. For example, I would sit down to complete a single quest, and without realizing it, hours would slip away…which is dangerous if you’re a pastor and must preach in the morning. 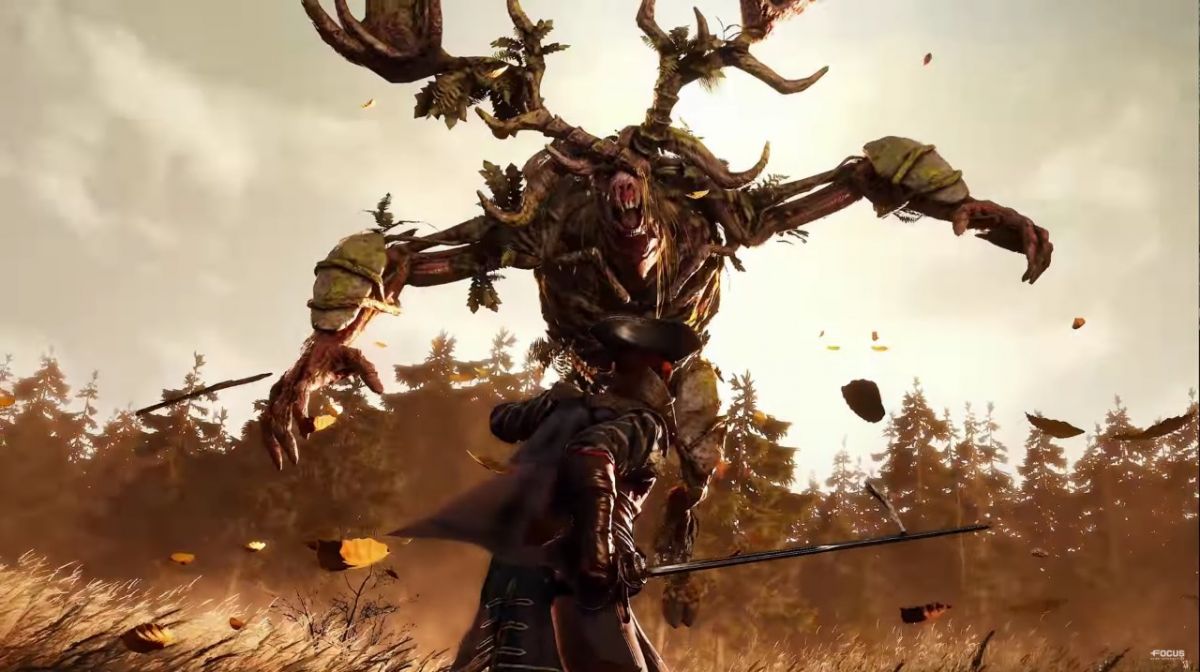 In several ways the art style reminds me of Bloodborne’s baroque landscape, and it showcases similarities in its enemy design as well. However, this game does not pose a challenge like a Bloodborne or Dark Souls game does. GreedFall is a classic action RPG, but it comes with a tactical pause button that slows down battle and allows you to assign certain hotkeys to heal, use magic, or use your firearms, which is a helpful ability when surrounded by foes or facing a strong boss. 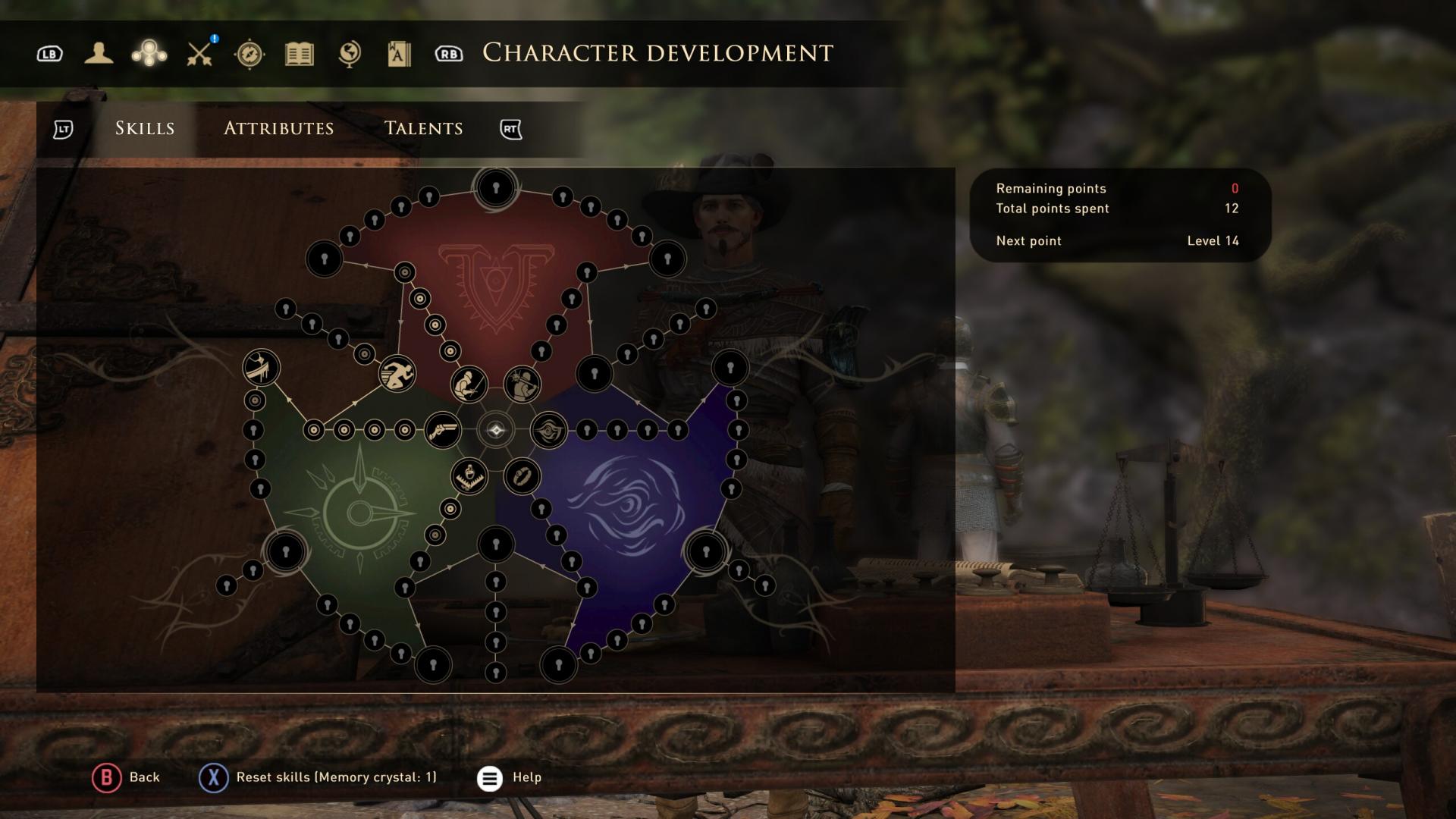 Gameplay-wise, GreedFall contains a variety of small issues, none of which are deal-breaking but together showcase an overall lack of polish. The game can become repetitive due to its mission types and structures, though not more than most RPGs that require you to complete fetch quests and loyalty missions. Besides, skipping these side quests means losing a major component of what makes a GreedFall a great game. A lack of enemy variety becomes apparent during your travels; when exploring the island you come across maybe up to 3 different types of enemies, and then a few paces later there is a copy-and-paste of the same group.  In terms of balance, combat generally feels good swords seem well-designed, but firearms are over powered and magic isn’t that fun. Another complaint concerns the cities themselves; each city you explore has a port area, a government area, and a residential or slum type area, and each of these have almost identical layouts, especially the capitol buildings. Some inexplicable invisible walls also pop up at times. Other technical problems can appear in cutscenes where the camera hovers on to another person’s face instead of the speaking character or the character with whom you’re exchanging a dialogue. Finally, GreedFall’s menu system comes across as cumbersome and outdated at times. 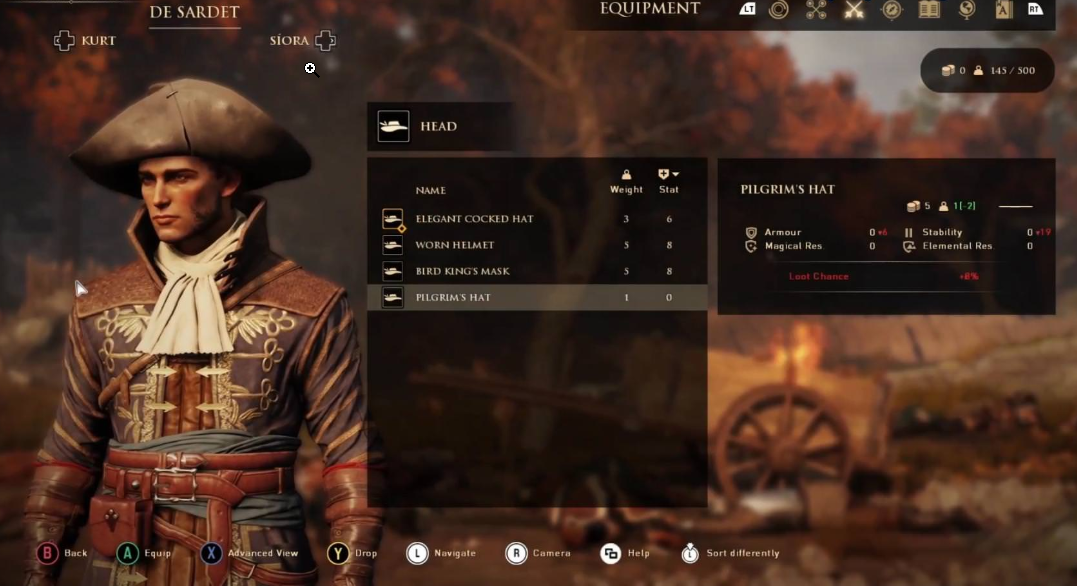 Despite these myriad issues, GreedFall still achieves greatness thanks to its engaging narrative, stellar world design, and deep customization. It kept me on the edge of my seat, and I look forward to tackling additional playthroughs in order to see how the experience changes when siding with different factions. The fact that Spiders has confirmed that there will be no DLC or expansions means that the story told here is truly complete; players won’t have to worry about missing out on critical story developments that would have appeared outside the base game. It all goes to show that a lower budget game from a AA studio can produce experiences on par with AAA competitors, and I look forward to trying out Spiders’ previous works.

Despite a variety of small issues, GreedFall impresses with its engaging narrative, stellar world design, and deep customization.