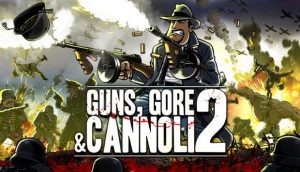 In 2015, Guns, Gore, and Cannoli came out of nowhere. In my review, I express delight like a child gifted a surprise excursion to Toys “R” Us (RIP 3/15/2018). Striking me as a tribute to Gunstar Heroes or Metal Slug, I believe that it deserves mention among the great SHMUPs. Crazy Monkey Studios and Claeys Brothers look to reprise their success with a sequel, though it resembles an expansion rather than a whole new game. 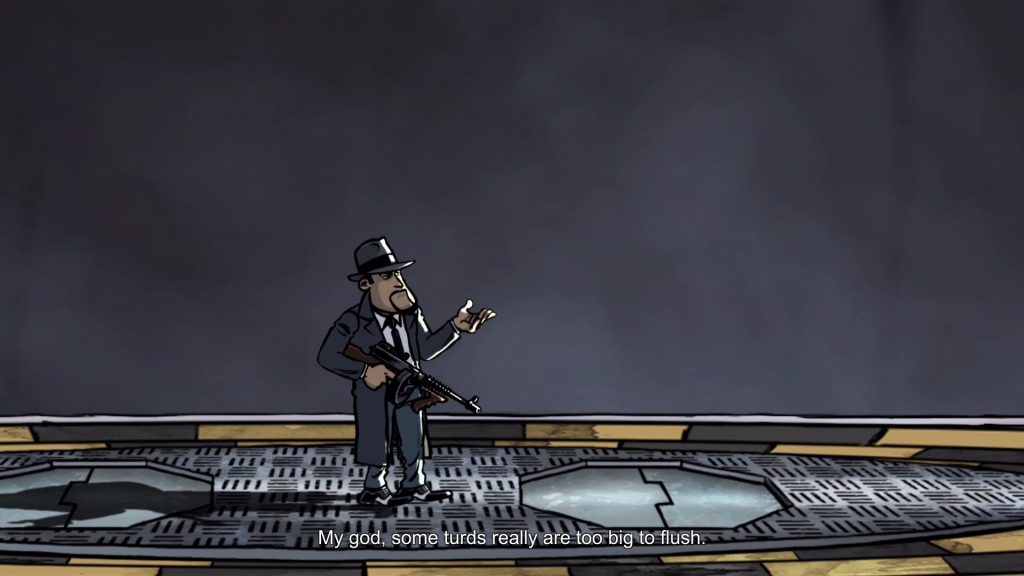 There are a few one-lines that gave me a chuckle.

Violence: Because the violence in Guns, Gore, and Cannoli 2 remains unchanged from the first game, I will quote what I wrote previously (changes added due to this game lacking features):

As the name of the game suggests, Guns, Gore, & Cannoli [2] contains the plenty of the red stuff. Headshots result in animations akin to mashing a watermelon with a sledgehammer, , fire burns flesh to ash . Enemies sometimes explode into a hail of gibs. The violence in this game is as advertised–not as gratuitously sensational as Mortal Kombat, yet still as graphic as Team Fortress 2.

Spiritual Content: Ultra conservatives may be offended by the presence of the walking (un)dead.

Language and Crude Humor: As seen in the screenshot above, this game takes the Lord’s name in vain at least once. Additionally, the game deploys euphemisms to avoid the worst of the profane.

Other: I am likely the last person to rock a thin blue line, yet I exerted a great deal of effort to avoid killing any police in the opening stages. I was under the assumption that I would unlock an achievement or something similar by not being a cop killer, as I had no grievances against them, and thought the reason for their presence understandable, but silly. Their purpose is to reestablish order as mobsters emerge from everywhere, and Vinnie is coincidentally among the chaos. Enabling gamers to kill zombies, thugs, Nazis, and police as if they are all the same is disquieting. 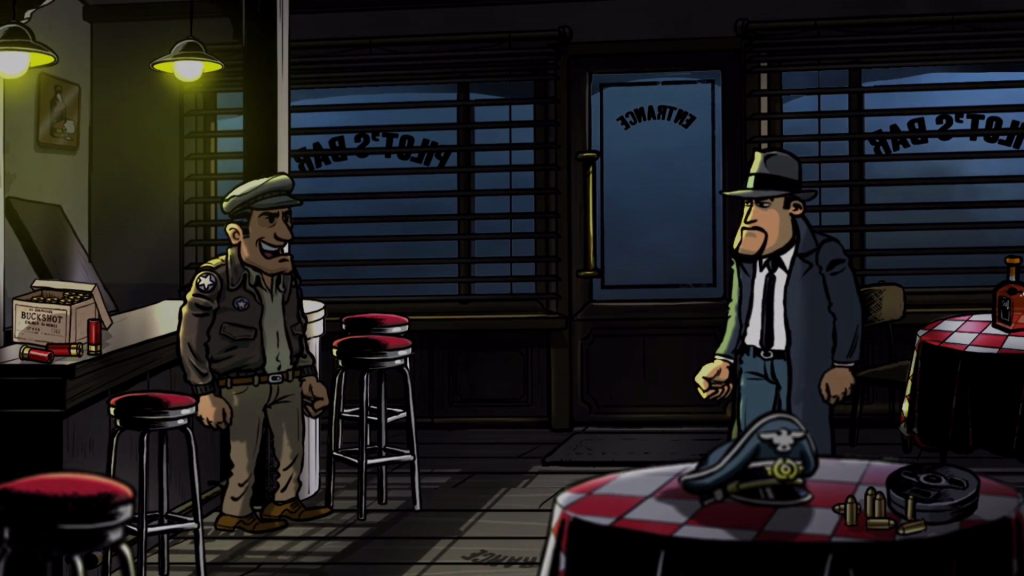 Even Vinnie does not believe the story in this game.

Guns, Gore, and Cannoli 2 begins with Vinnie Cannoli tied to a chair. Two wise guys walk in and discuss how Vinnie is a living legend due to his heroics in Thugtown during the events of Guns, Gore, and Cannoli. One considers applying a chainsaw to the protagonist, but the other denies him, cautioning that the so-called Dark Don wants him alive. Breaking free, our hero OHKOs both of the terrified goons, with each flying in opposite directions. Vinnie then opts to perform some non-consensual cosmetic surgery on one of the thugs with the gentle precision of the aforementioned chainsaw. The title sequence then rolls, and he sets off to figure out why the Dark Don wants to apprehend him. 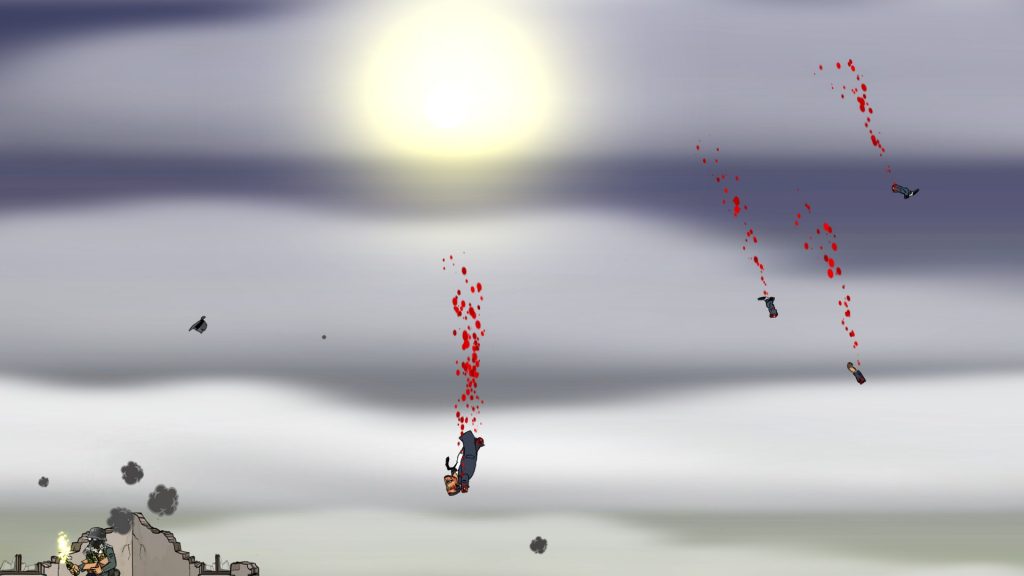 With ragdoll physics like these, the game lives up to its name.

If the “2” and subsequent gameplay do not indicate that this game is sequel, re-reading my review of its predecessor confirms that it is at the very least a different game. Unfortunately, I feel that practically all of the changes are to the franchise’s detriment. I am alienated by the game’s new control scheme at once. In the first game, pointing the left analog stick to the left or right would change the direction in which one can aim; now, one must use the right analog stick to change directions and aim, while the left analog controls character movement. This can be disorienting when taking on enemies coming from both sides of the screen, and unlike almost every run-and-gun side-scroller ever, two different buttons are required for movement and aiming. 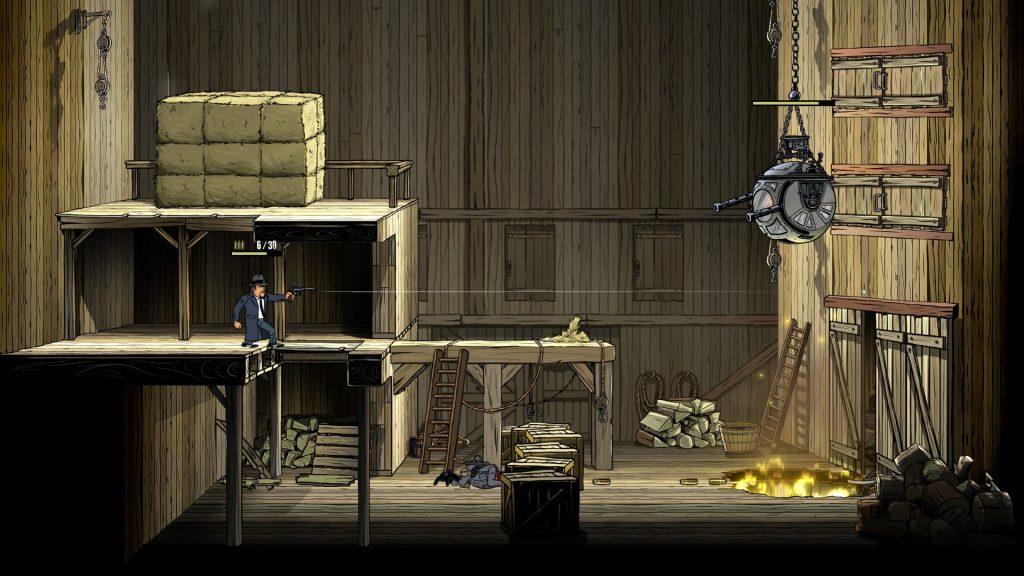 Enjoyment of Guns, Gore, and Cannoli 2 is directly proportional to the player’s ability to move and aim simultaneously—easier said than done.

I at least understand this change in the context of Guns, Gore, and Cannoli 2. I can only believe that in the sequel, the developers may have taken note of in the rise of popularity in twin-stick shooters such as Nex Machina, and wished to increase Guns, Gore, and Cannoli 2‘s vertical dynamism while maintaining its 2D aesthetic. Again, in the original, gameplay is primarily a horizontal enterprise; enemies above or below could be easily accessed with a jump or descent into platforms, and headshots are possible simply by standing and shooting on level ground, true to the style of a run-and-gun . Here in the sequel, players are equipped with a double-jump and the ability change aiming pitch to attack enemies at various elevations. As all but the default pistol has limited ammunition, and aiming while moving is an exercise in frustration, despite the aiming line (that can be disabled in options, for those who revel in masochism). The lack of a “classic” control option is a nigh unforgivable. A great deal of any fun I could have had with this game was suppressed by spending my time adjusting to the aiming mechanics. 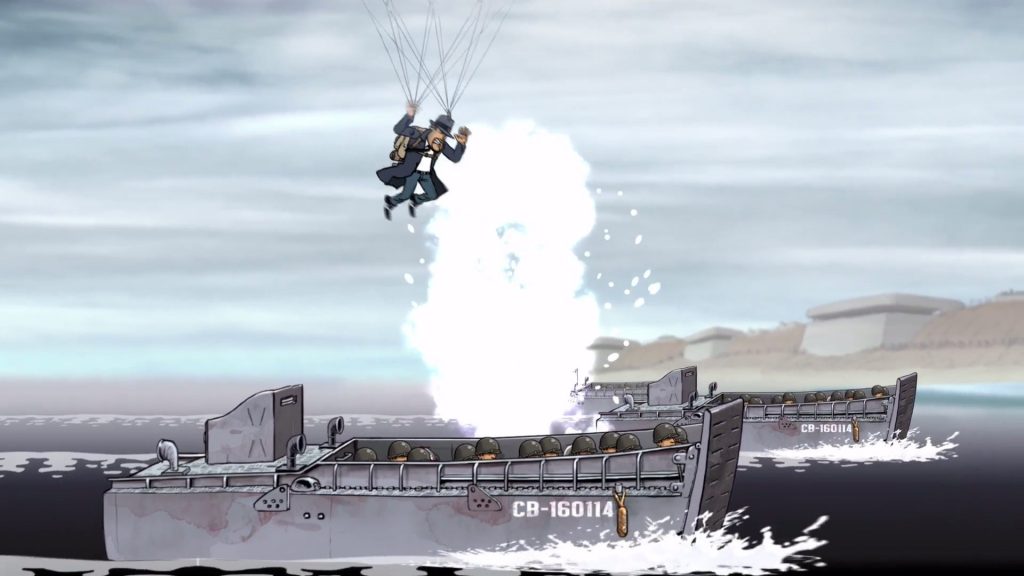 Vinnie Cannoli dropping in to assist the Allied invasion of Normandy, AKA, D-Day. Wait, WUT???

Compounding my grievances with Guns, Gore, and Cannoli 2 is its overall shift in tone. The first game introduces zombies from the start, presenting guilt-free cannon fodder in a convincing Prohibition-era zombie apocalypse. Gangsters are added shortly thereafter for story purposes, and Vinnie eventually violates the army-established quarantine, earning their ire. In the sequel, humans dominate as targets: police officers, gangsters, and Nazis—yes, Nazis. Because the zombie apocalypse has been sequestered in Thugtown, the fictional location from the first game, there are only three missions dedicated to zombies. Therefore, in a contrived plot device, Vinnie takes a trip from America to WWII-era Europe, providing a robust motif of tougher foes. This deviation is farcical, prompting me to mutter “YEAH RIGHT!” under my breath in disbelief during the entirety of the game’s final quarter. 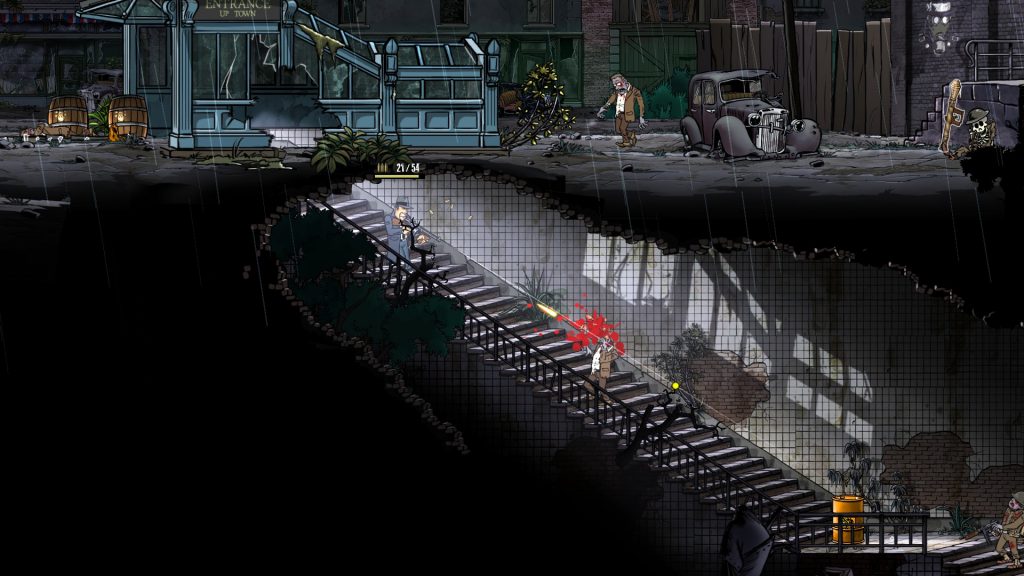 The trip to Thugtown is regrettably brief. Wish I could have spent more time in a setting where zombies are in occupation.

This change in focus means that the creativity in enemy type has been significantly compromised. Zombie runners are now as rare as bloated zombies once were; bloated zombies are now as rare as mini-bosses; zombies who crawl or wear signs as body shields or become greater (temporary) threats when decapitated are all gone, as are the zombie leprechaun bombers. In exchange, Guns, Gore, and Cannoli 2 features gargantuan zombies who are sometimes armed like Terminators, firing high-powered, homing missiles. A gangster who charges while punching (replacing the zombie football charger), and a running female zombie who uses one of her arms as a bludgeon rounds out the new enemies. To be curt, if I wanted to shoot Nazis, I would prefer to fire up Wolfenstein. 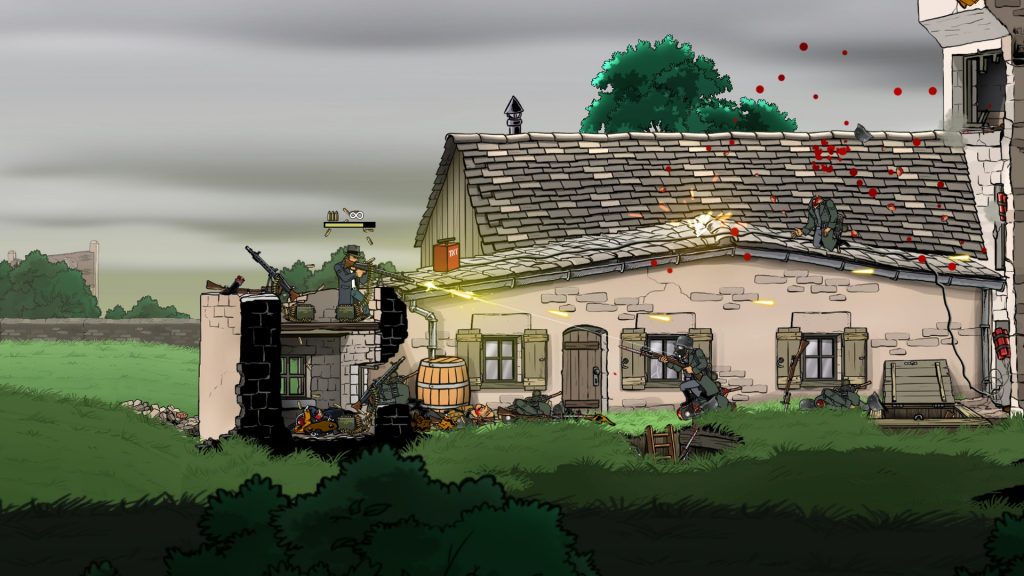 I would have preferred an alien invasion rather than fighting Nazis…again.

Weapon variety in is something of an oxymoron despite the expanded options. Gone are the double-barrel shotgun, magnum revolver, and tesla gun. Vinnie gains a chainsaw, the ability to use pistols akimbo, the Mauser magnum, a Schmeisser submachine gun, Sturmgewehr assault rifle, and grenade launcher that replaces hand-thrown grenades. Adding the Tommy Gun and MG42, this totals four machine gun types, which are good in case one is disinterested in frequent reloading, or wants to keep enemies at a distance. But this is also makes for boring weapon choices. Combined with having to use both analogs simultaneously, R1 (default) to bring up the targeting reticle and R2 to shoot, managing a button to kick, and L1 to roll (also new), there are too many buttons in use for a game of this genre, increasing my vexation with gameplay rather than pleasure.

I cannot say that I had fun playing Guns, Gore, and Cannoli 2. I intentionally rushed through it, anticipating that it would eventually get better. It did not.  Yet, it is not a bad game. The original is simply better. I recommend playing it first.

Guns, Gore, and Cannoli 2 is a step backwards for an IP that premiered as an excellent tribute to games like Metal Slug. The modifications to its successful formula reduce what was once great to something that is merely above average.