What is it good for? Part Duex

When it comes to blockbuster franchises, stagnation is always a major concern amongst critics and fans. A franchise like Call of Duty can try to reinvent itself annually but will always have the same basic components: Shoot bad guys until you clear the room, shoot some more bad guys, play a vehicle level here and there, go through another cookie-cutter mission, finish the story, then play multiplayer until the next game comes around. One way to prevent this stagnation is by spacing out release dates so games in the series come out every three years or so. In many cases, this increased development time allows for each game to obtain a spice and flavor that separates it from the previous entries. Some things never change, like an excessively salty fanbase, or hackers running rampant in multiplayer, but this extra time can be just enough to keep players from getting tired of the “same old game”. The Halo franchise has so far found great success with this model, keeping stagnation at bay by spacing their main releases out by a few years. Eventually, though, something has to change to keep a series fresh, and release gaps can only do so much. As they say, a magic trick only fools you until you figure out how it works. If you can’t keep an audience interested, they might catch on to the trick’s core components: the “Pledge, Turn, and Prestige”. The best a studio can hope for to avoid this is dazzling the audience with a new trick before they can figure out how the old one works. This is what Microsoft and Ensemble Studios aimed to do with the original Halo Wars, a spin-off of the mainline Halo franchise. Faced with moderate success, Creative Assembly’s Halo Wars 2 is an attempt to wow the audience with this “new trick” once again.

Violence: As one might expect from a game with “war” in the title, a lot of the gameplay centers around violence. You build bases, gather resources, and fight a faction new to the Halo series called “The Banished”. Your forces and enemies duke it out with various weapons and vehicles from flamethrowers and plasma grenades to Banshees and Warthogs. Essentially everything from the mainline Halo games is used in brutal wars of attrition. You hear cries of pain when troops are injured, and blood is occasionally visible, both in cutscenes during gameplay. However, the violence is generally much more mild and tame than previous installments in the series. 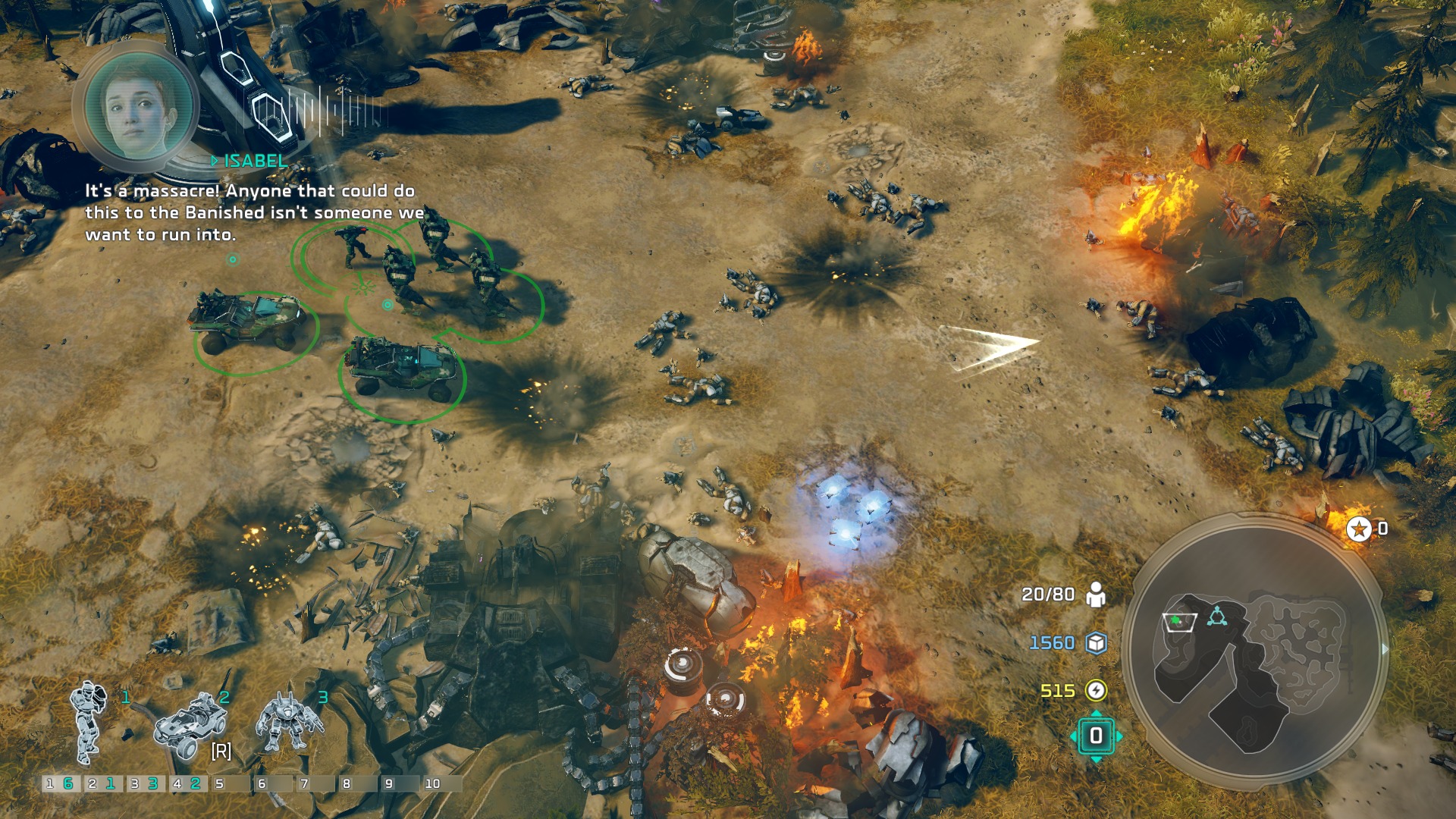 Language: B**h and a*s are used in dialogue on occasion.

There are few franchises as special to me as Halo. I absolutely adore the fleshed-out world and fast-paced gameplay from Bungie’s original trilogy. In fact, Halo 3 was the first game my brothers and I ever got for our Xbox 360, way back in Spring of 2008. Normally, I’m not one for strategy games. I can see why people like them, but they’re just not my thing. However, my love for the world of Halo meant that I couldn’t resist giving Halo Wars 2 a shot, especially since I missed out on playing the original Halo Wars.

The story for Halo Wars 2 takes place a few decades after the original Halo Wars. The UNSC Spirit of Fire and its crew have been in hibernation and drifting through space after their warp core was used to defeat the Covenant in the finale of Halo Wars. After stumbling upon an ancient and powerful structure known as “The Ark”, the crew awaken from hypersleep and discover a new threat: “The Banished”. These villains are led by Atriox, a Brute who bucked the chain of command during the original Halo trilogy. He and his crew have taken control of the Ark and have been using it to wreak havoc on UNSC forces. 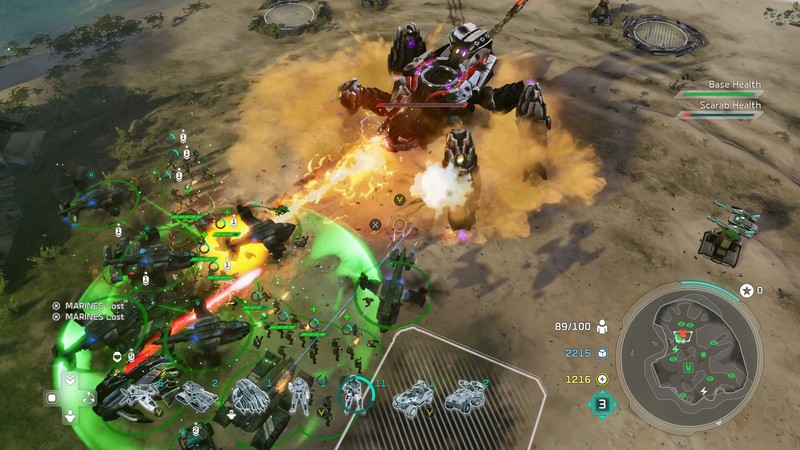 Each mission starts with building up your base and army. Building structures requires supplies, while upgrades and some units require power that comes from supply pads and generators but can also be found on the map by destroying enemy depots. All of this can be found by embarking on missions, which hold a surprisingly enjoyable variety of experiences. In one of my personal favorites, you control a Spartan as he frees prisoners from a Banished POW camp; the normal mission format is made extra challenging as you fight to escape while also making sure everyone stays alive. Intense missions like this one served as a nice change of pace from the occasionally tedious base building mechanics. In another standout mission, you engage in a vicious match of domination, all the while trying to dodge Sentinels that can cut through most forces like paper. In scenarios like these, having a strong and varied force is important for victory; The game works off a kind of “rock-paper-scissors” system where vehicle beats infantry, infantry beats air, and air beats vehicle. This multi-layered combat system is made even more complex by the “Leader Points” feature. These points unlock abilities that can be put to use in the field to turn the tide of battle.  From healing drones to missile strikes to extra quick troop deployments, these can come in real handy when used at just the right time. However, they need to be deployed strategically, as using them when low on power and supplies can majorly backfire.

Unfortunately, I’m a bit of an idiot and it took me way too many failed attempts to realize where my strategy was going wrong. But the beautiful thing is that once it clicked for me, I was able to brush myself off and start winning. Sadly, this smooth flow of gameplay did not translate well into multiplayer. I really enjoy building up and upgrading my units to their peak potential before attacking, but teaming up with other players to take on AI just did not hold the same kind of charm as a traditional FPS did. It could just be me, but the slow and steady “tortoise” build-up is an immense “heel turn” from the fast-paced gameplay that makes a lot of multiplayer so enjoyable. The Blitz feature is by far the most interesting feature in multiplayer. Blitz provides RTS gameplay via a deck based deployment system. You deploy a unit, draw another unit card, then wait to gain enough power to deploy more units. The cards you play are then used to defeat other units and take over three control points on the map. This works really well and provides the perfect blend of Halo Wars 2’s excellent gameplay with an extra layer of Hearthstone thrown in for good measure. 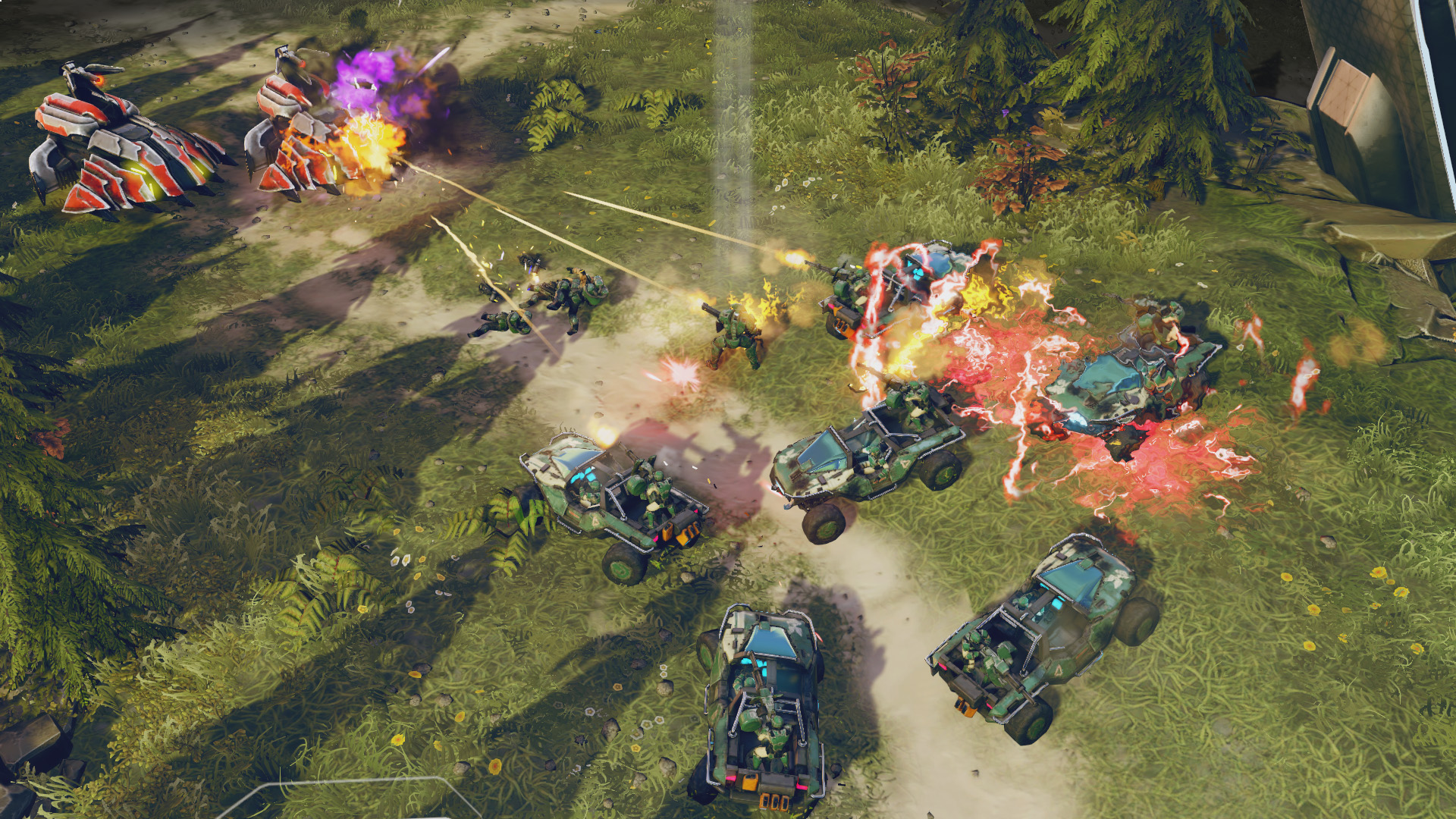 There is so much to like about this game. It has solid presentation with great details from the epic battle taking place in the bird’s eye view to the tiniest blade of grass when you zoom all the way in. Watching over these battlefields almost feels like looking at the kinds of epic dioramas you might see in a museum. The voice acting is incredible, anchored by the always awesome Gideon Emery. Hearing the score calls back to my memories of old school Halo. And the most impressive part is that all of it feels great to play with a controller, especially considering how synonymous keyboard and mouse controls have been with real time strategy games.

With all the training done by Shang in Mulan’s classic song, he was able to make a man out of a bunch of wimps. Sadly, Halo Wars 2 was unable to make a fan out of me. This is not the game’s fault. Everything in it is done incredibly well, from gameplay to voice acting and score but it just did not work for me. However, I do like the introduction of Halo Infinite’s villain being organically developed here instead of it being forced elsewhere. The implications for the Halo universe at large are exciting, and I can not wait for what comes next.

Halo Wars 2 is a fine RTS that sadly could not make an RTS fan out of me.