Where are You, Yu? Are you okay, Kay? 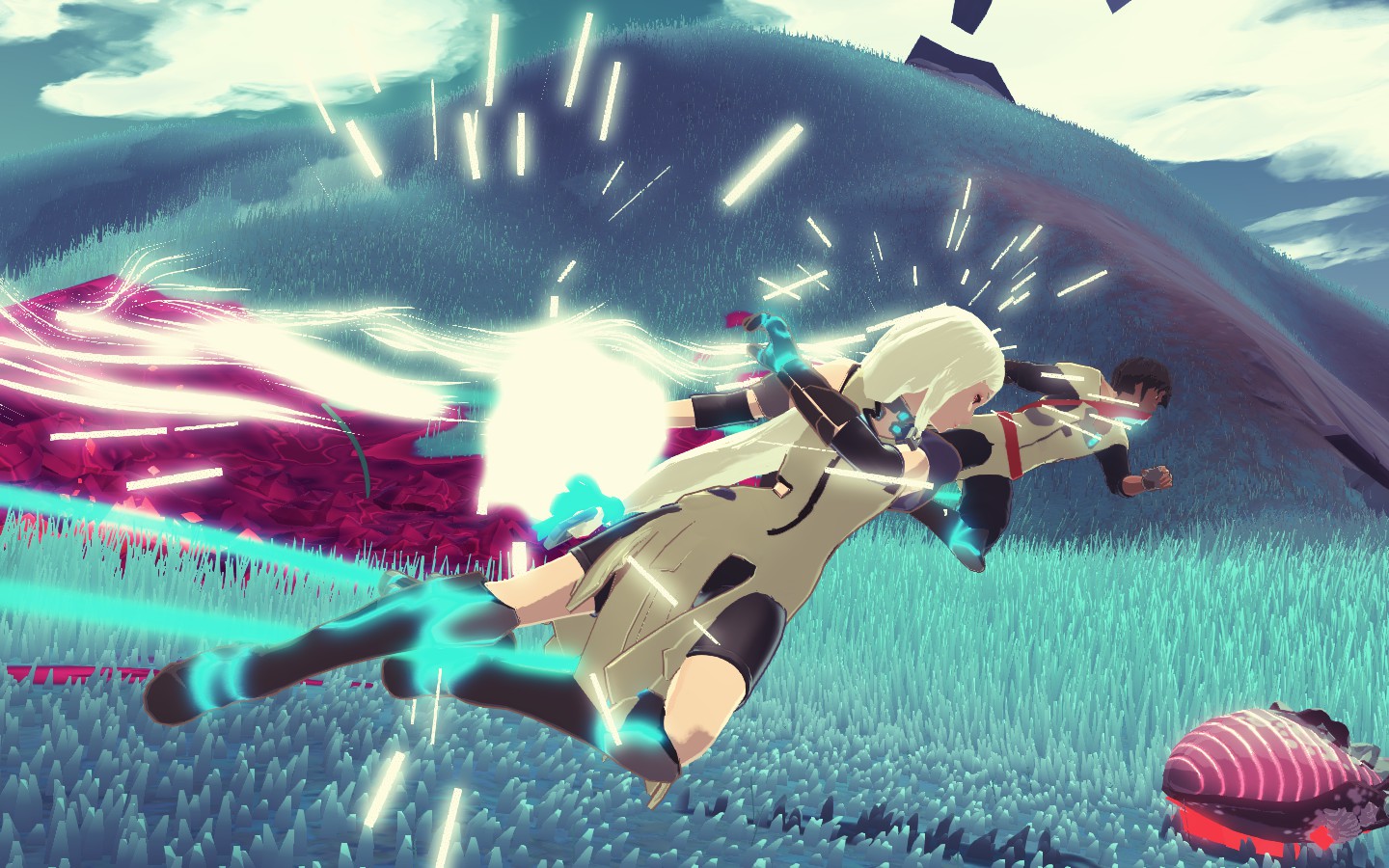 Haven, made by Furi developer Game Bakers, is a story driven game, with some combat elements, and lots of exploration. Yu and Kay are lovers fleeing a society ruled by pre-ordained relationships and now seek freedom on the volatile planet, Source. The game showcases their daily lives exploring, understanding this strange planet they’ve never been on, interacting with the wildlife, and enjoying each other’s company.

In this review, I have the honor to collaborate with my wife. We played this game together, and came away with a unique experience. And since we both contribute to the Geeks Under Grace community, we thought it would be fun to tackle the review together as well. 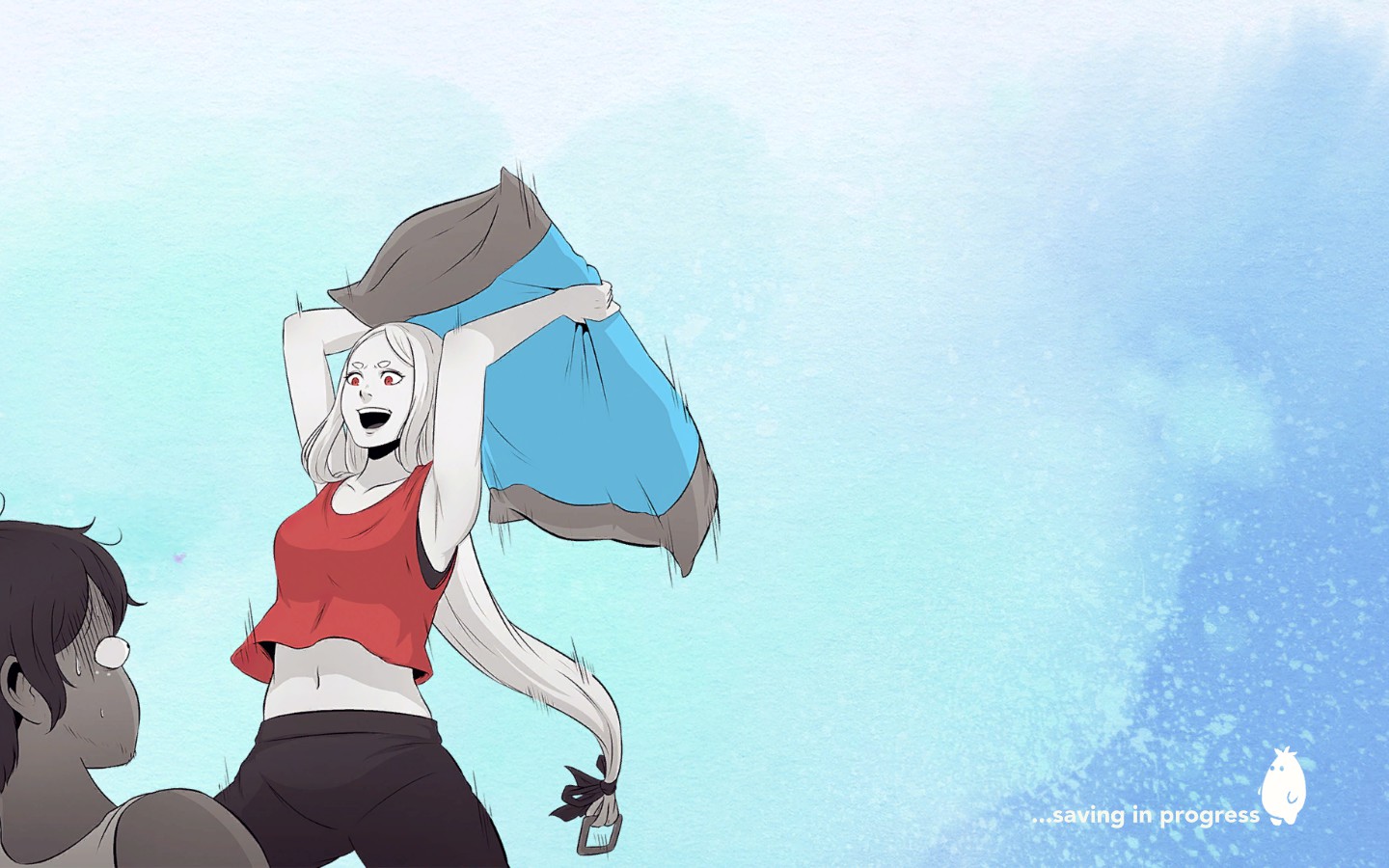 The Rust material on Source turns the wildlife hostile. Hitting them with energy blasts, physical attacks, and finally pacifying them to pure the Rust from them is kids cartoon level of clean.

They have their own form of cursing. It is bloot.

Yu and Kay act like a newlywed couple. They flirt often, shower together, cuddle on the couch, sleep in the same bed, make references to having sex, and more minor suggestive moments.

Yu and Kay have a bond meter that grows when they fight, and explore. When it reaches its max, they make it a celebration by brewing a flask of the planet’s most common fruit: appledew. They then share a meaningful moment, but that’s all the brew is used for.

The theme of companionship runs through the story, and in the gameplay harmoniously. Yu and Kay escape a world mandated by a machine choosing perfect partners based on an algorithm. They make the choice that love isn’t based on predetermined outcomes, but by choice. But they also learn what and experience everything a couple experiences as well; love is messy. It’s not all cooking together, and making love. It’s also a boring day to day, enhancing each other’s strengths, and covering each other’s weaknesses. It’s also about fighting, and resolving, coordination, communication, and compromise.

The gameplay requires the same in order to succeed, communicating where you’re going with your partner, launching powerful attacks with in sync button commands, and agreeing to the same dialogue choice. It’s a messy process at times. Something shiny may be a distraction, or the difference in fighting or fleeing, searching up or left, will cause confusion and disarray. The more we communicate, the better off couples are succeeding and having fun.

(Johnathan) Yu and Kay escape to the Source, a planet of island chunks connected by Flow streams. Their home planet decides partnership based on the Matchmaker. Yu and Kay start a new life, while uncovering a mystery that was meant to be hidden. Upon this planet are two substances, Flow, which gives the power of flight through their anti-grav boots, and Rust, a sort of ‘anti-flow’ that irritates the wildlife and degrades the landscape.

(Courtney) The real reason I wanted to play this game was the story. I am usually a book reviewer, and the games I play (or watch Johnathan play) are ones that have a good story. Haven has a story that, while not original, spoke to me as a newly married woman. This couple is not trying to change their world for the better; they just want to be left alone to love each other in peace. When I say not original, I mean this is basically Romeo and Juliet in a space dystopia. This is the exact same plot as Saga, which I recently reviewed for Banned Books Week. That said, going into this, I was excited, but also nervous for all the rated-AO scenes I may see. Which was none. Haven has a very similar story to Saga,  which is no surprise given that Game Bakers went on record of their website touting Saga as an inspiration. 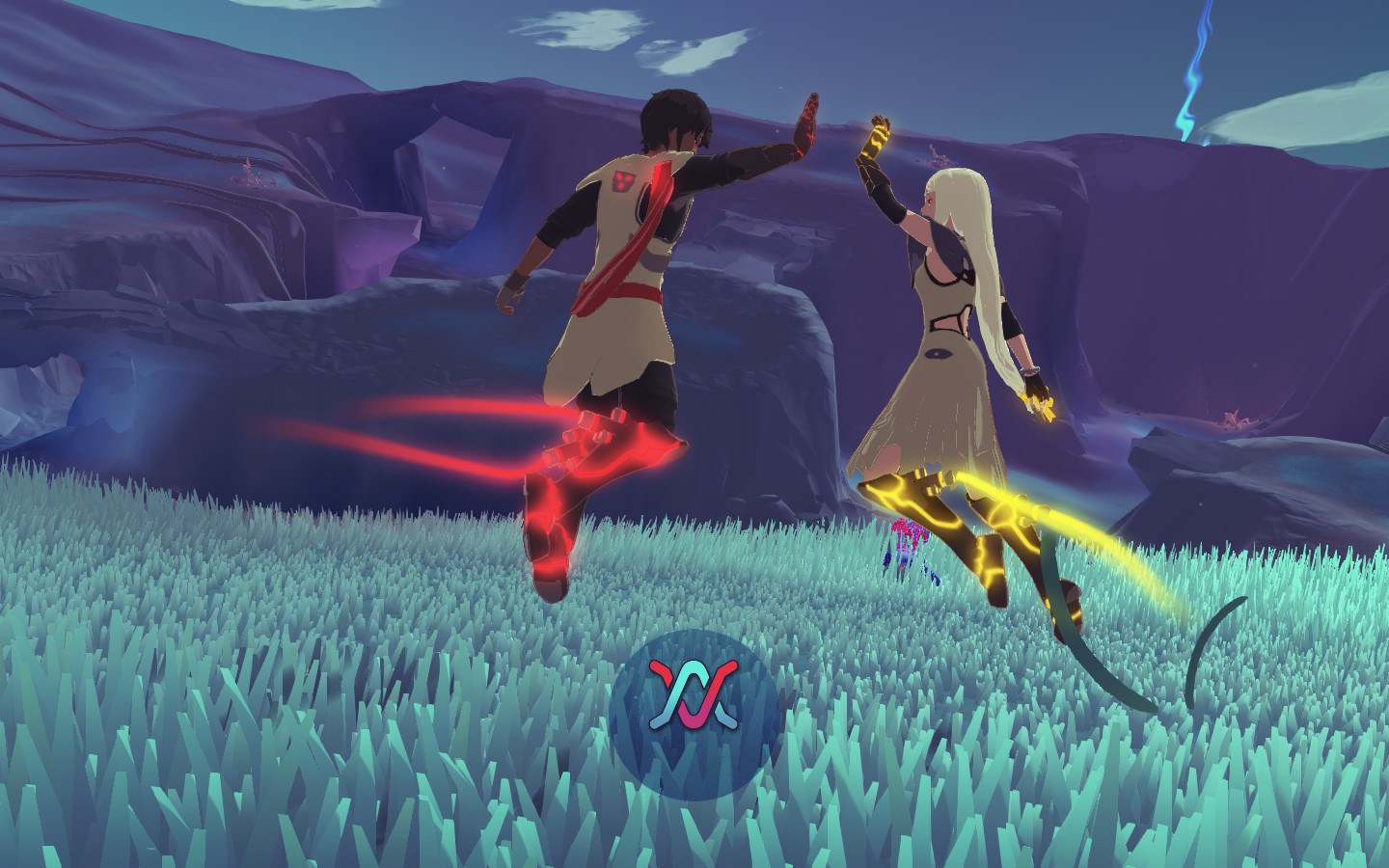 (Johnathan) The Romeo and Juliet archetype seems to be getting a lot of traction in the indie games I’ve personally covered. No Straight Roads also featured an ambiguous couple that carried some baggage from previous relationships too. While it may seem like I might be a magnet for such things, I believe the real reason is Romeo and Juliet are becoming gamers, and a few small developers are celebrating this. To have games specifically for couples is really nice.

But I never expected a game to require working together.

(Courtney) This game allows two people to each control a character, but when you are flying, the controls switch to one person. The other player is not ideal during these times. They get to play as a bubble of light, scooping up ingredients on the ground or cleaning up rust the characters cannot reach. However, this shift from controlling your character to being controlled by your partner is jarring, and queasy inducing. 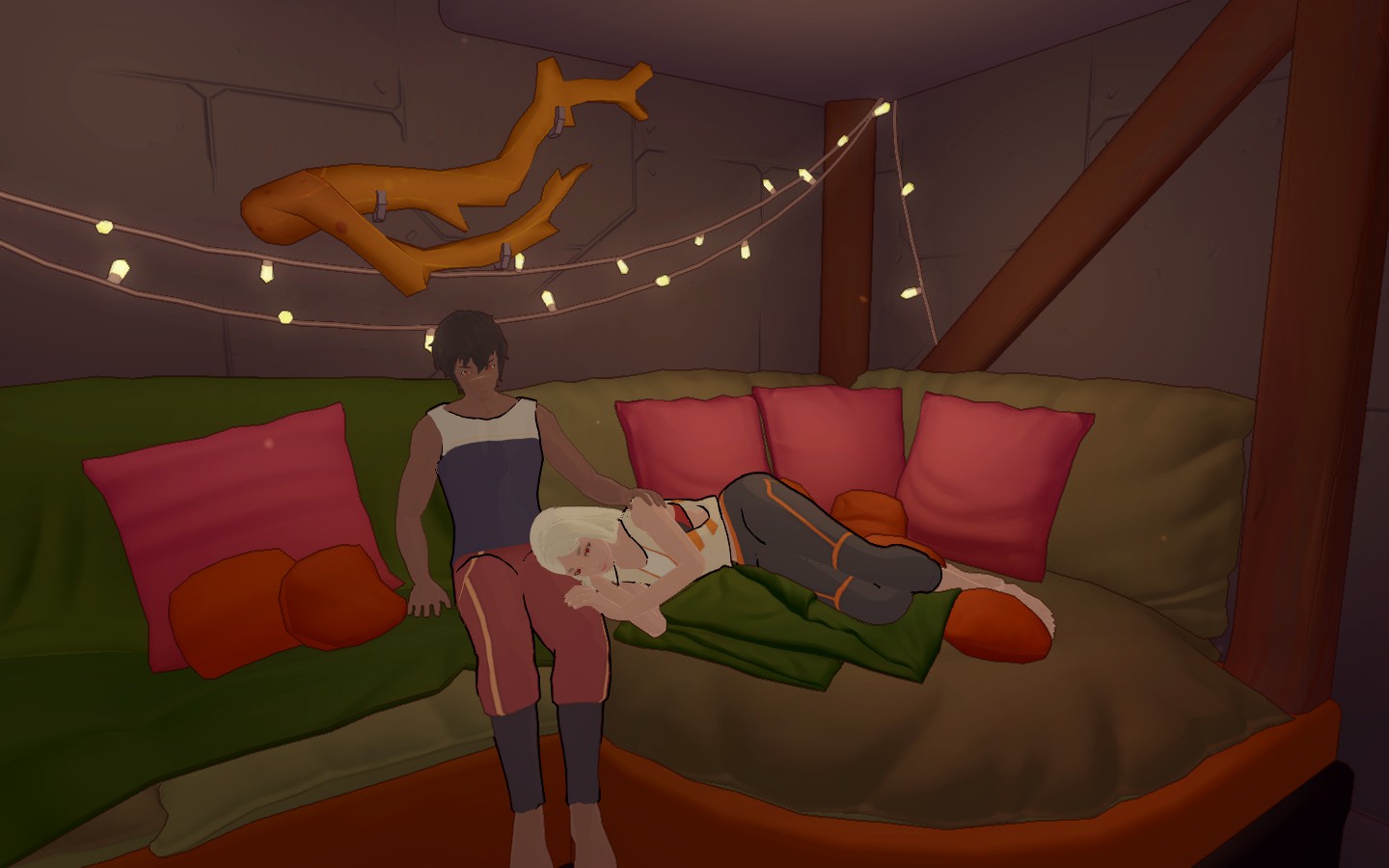 Seeing this was a game about couples with a co-operative mode, I wanted to give it a try. While we had a lot of fun. Each person can walk around as their character, but at a crawl. Flying is the best way to travel, which only one player can do at a time. I liked exploring, picking ingredients, and getting my bearings on the map. I never considered how much communication would be needed in a game where two people control the camera.

When he swerved to look at something without telling me, all of a sudden, my character would be soaring through the air and the landscape zooming past me. At some points, I had to drop out of the game because I was so dizzy watching my husband control the entire screen. (I tried being the one in control, but my sense of direction is so bad, we end up going in circles.) 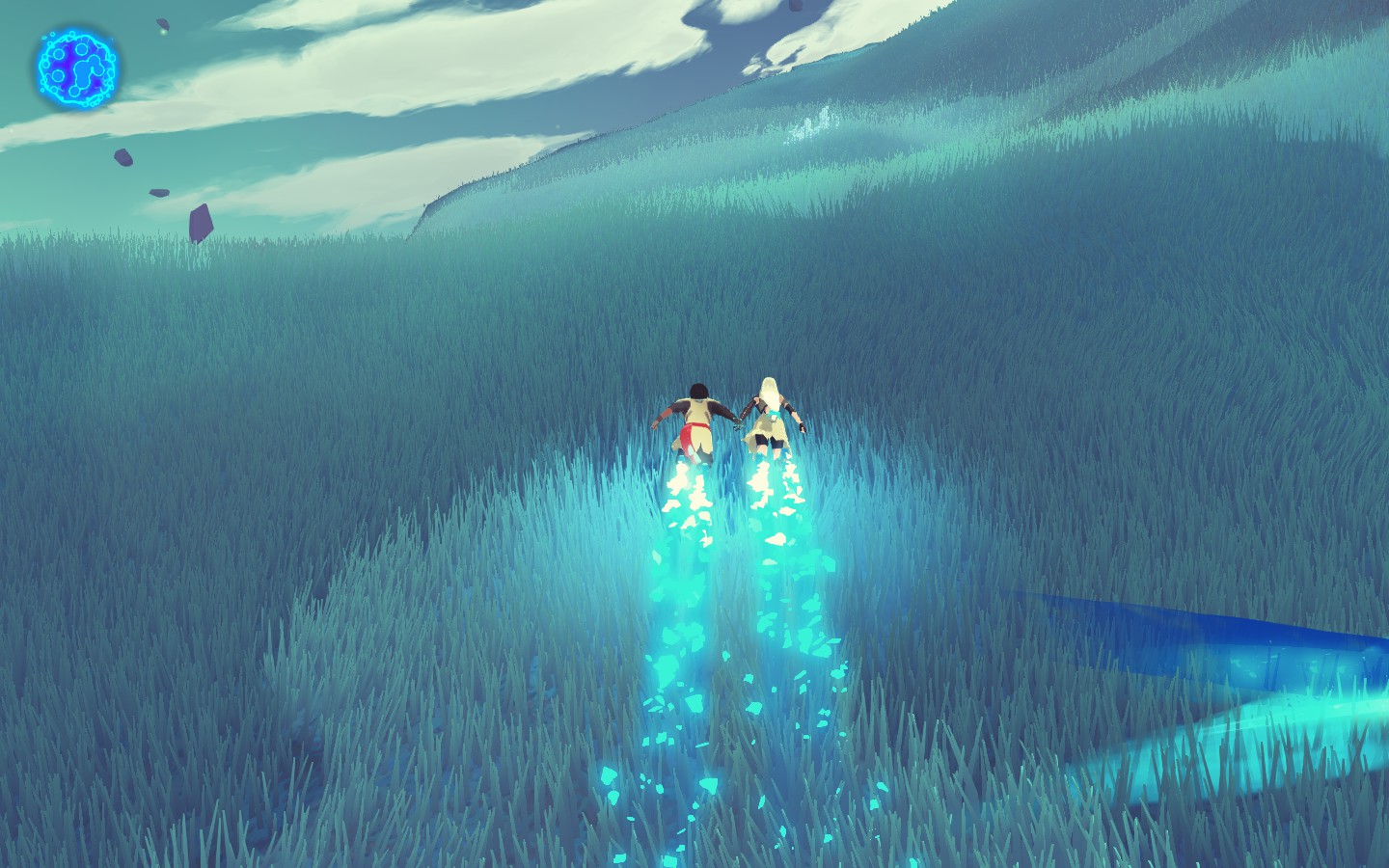 Despite my complaint, this mechanic feels purposeful. After all, this game is designed for two people who need to learn to communicate with each other. Whenever my husband said, “Alright, here we go,” I knew to either avert my eyes or work as well as I could as a bubble. We would take turns with the camera and always had to let the other person know which way we were looking.

In the same way, whoever was flying had to let their partner know which way they were going, and the partner had to mention if they saw something interesting the flier missed. While I often got frustrated because I wanted to fly alongside my husband instead of giving him my character controls, it forced us to communicate and work together more than a split-screen would have done. Allowing the non-flier to interact with the landscape as much as the flier winds up helping both parties. Whoever controls the flying has a hard time seeing what’s around them, and these controls do not allow for very sharp turns. 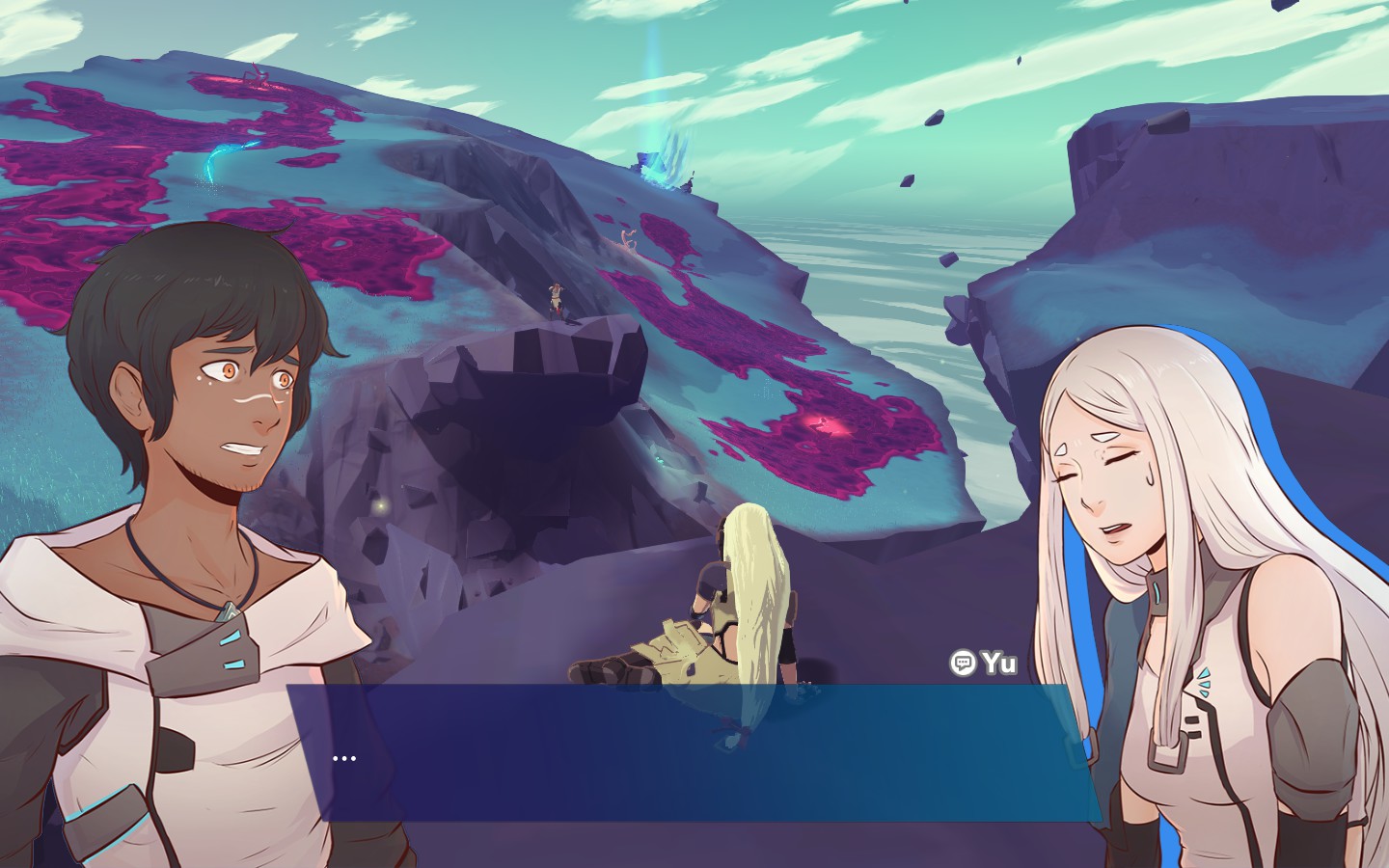 (Johnathan) When playing co-op, it feels like you both have one half of the controller. When you’re synchronized, it feels like two minds working as one. But with everything, it takes practice, and effort. I am used to playing games at a high level of intake. But with playing as a couple working together, I had to slow down, and explain my decisions, which is a new experience that admittedly wasn’t fun at first. But as my wife became more trusting and understanding, and I became coordinative, and patient, our teamwork became stronger, the experience became lively.

Haven is more experience than game. The themes aren’t complex, the soundtrack all sounds the same, the voice acting is above average, and the story isn’t game of the year material. The entire game can be played by a single player, without any of the hassle of working together, or miscommunication, or changing the way you play for someone else.

What the game achieves, however, is worthy of note. It’s much more fun and accomplishing to come together And it’s a good start, with some more time, the sequel, or the next Game Baker game could revolutionize co-op. 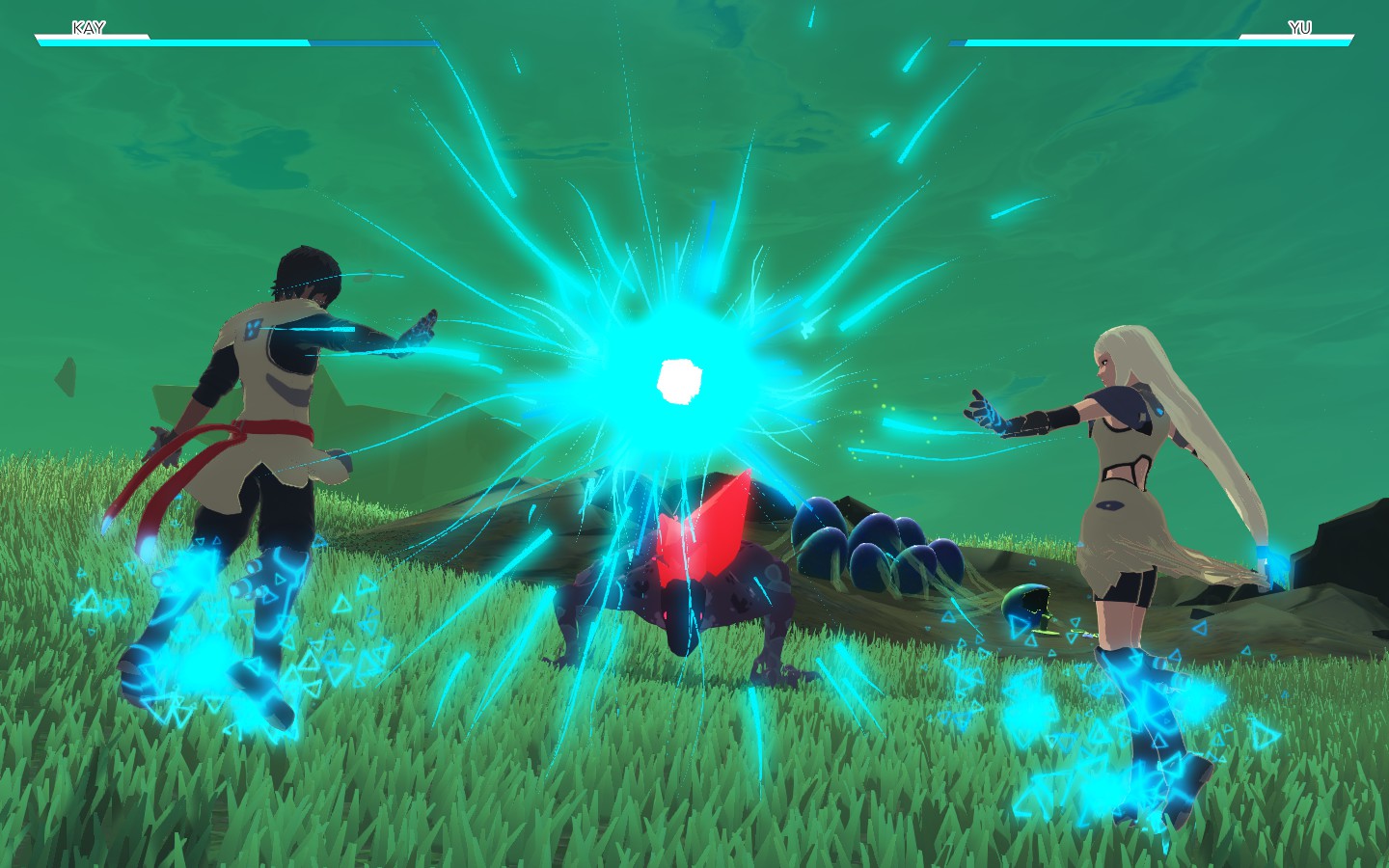 (Courtney) Haven is a great game for couples. The main focus is a beautiful love story, and its co-op mode requires lots of communication between players. Other cooperative game experiences force players to communicate for the sake of platforming or puzzles. If you don’t talk, you may end up getting in each other’s way or even messing up an important puzzle. Haven, though, rewards the couple that seeks unity with a refreshing co-op experience. 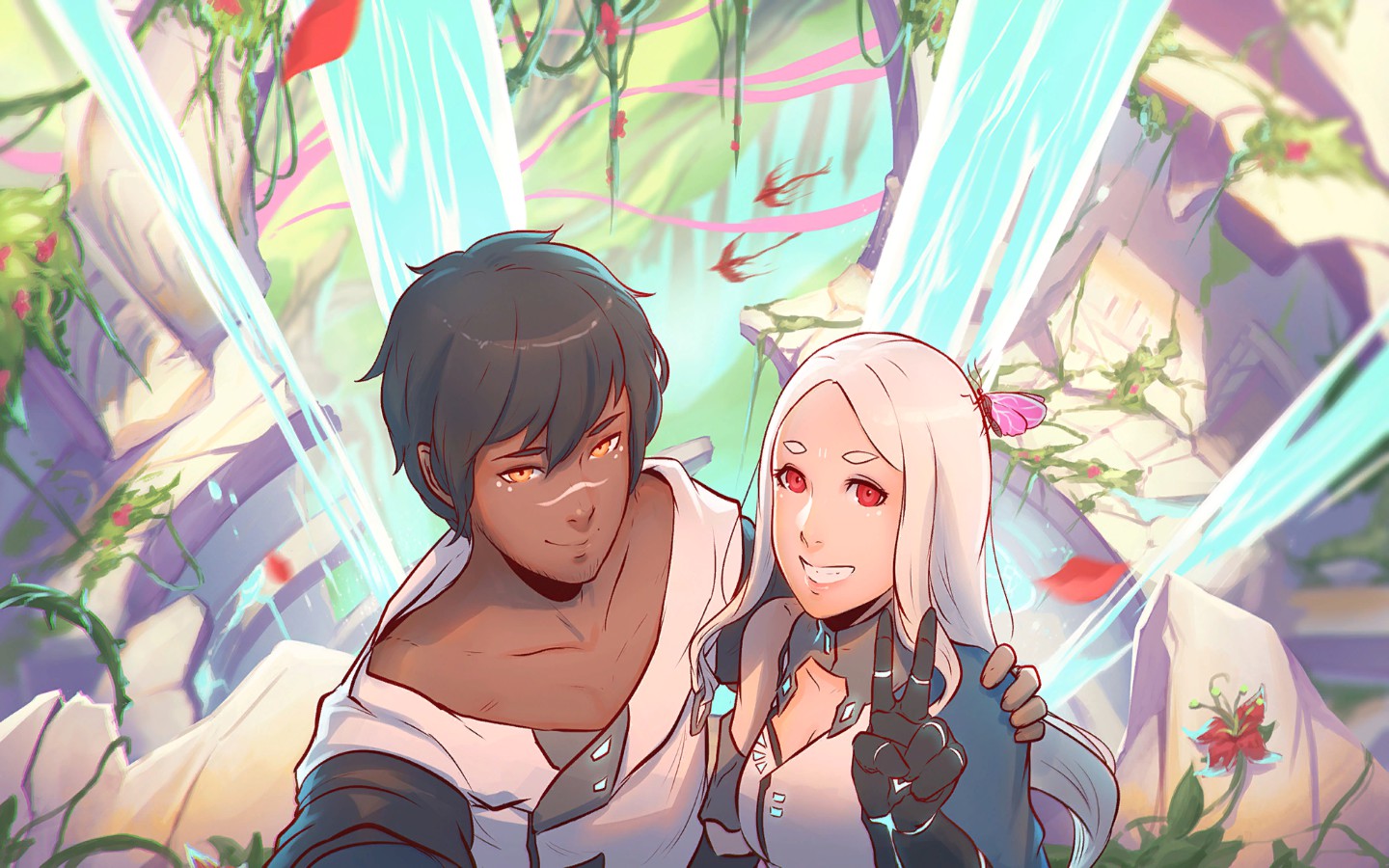