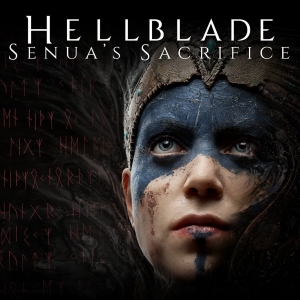 With games in their repertoire such as Heavenly Sword and Enslaved: Odyssey to the West, Ninja Theory has shown they know what it takes to make top-tier action titles. With DmC: Devil May Cry, they showcased a gritty, stylistic approach to action. Now, with Hellblade: Sensua’s Sacrifice, the studio is going indie and proving they have the chops to make a meaningful, haunting game without relying as heavily on combat as they have traditionally. 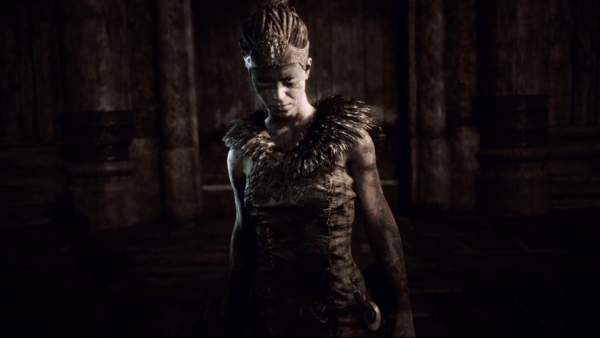 Hellblade is completely steeped in religious content, though most of it is Norse in nature. The “hell” Senua’s traveling to in the narrative is Helheim, ruled by the Hel, the giantess daughter of Loki. She’s traveling there with her dead love’s head in order to save his soul. Along the way there’s a glut of appearances from other Norse deities to help guide the narrative. The game also deals heavily with Senua’s psychosis, which has a strong eerie spiritual air about it  which caused me feelings of discomfort at times.

Though there’s little in terms of gore from direct violence, the game is rife with mutilated corpses. Many of these are piled up, hanging from gibbets, or strung up on pikes and cross-like structures. Bones, walls of bodies, and trees full of hanged people are not uncommon here either. There is a substantial amount of combat, and Senua can get fairly beat up from it; apart from the jarring final blow, there’s nothing disturbing or gory. Enemies both appear from and vanish into the air when dispatched. 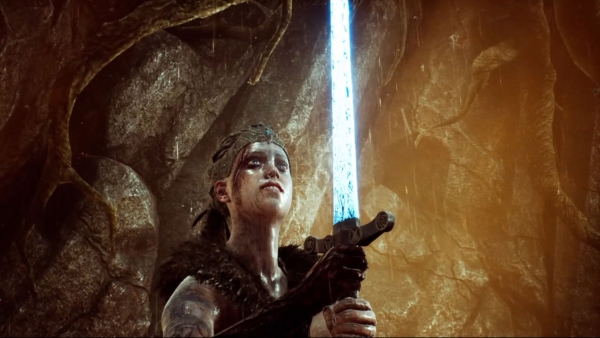 There is no humor to speak of in the game. It’s serious through and through. Until the final act, there is no coarse language either. At that point, however, there is some R-rated language used, including F***.

The goddess giant Hel is portrayed with no clothes. It is not sexualized and is, in fact, grotesque by nature. Half of her body is burned horribly.

There is no drug or alcohol use.

Despite the overwhelmingly depressing, negative tones of the game, Sensua refuses to give up. She’s driven by the love of the one man who could ever see past her psychosis and will give everything she has to save his soul. 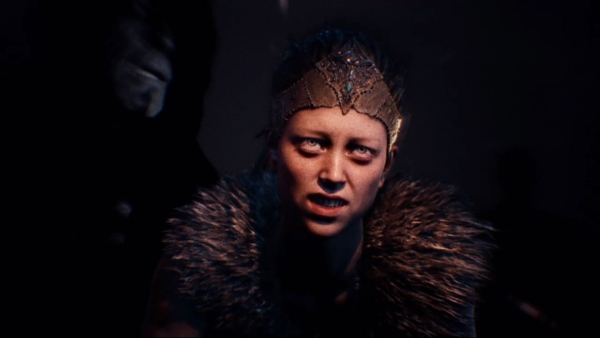 Experiencing Hellblade‘s storytelling is mesmerizing. The team at Ninja Theory went above and beyond to portray the tale from the perspective of a protagonist that suffers from psychosis. In fact, the first name given in the game’s opening credits was to their “Mental Health Advisor.” From the opening sequence to the very end, Senua hears voices. They constantly chatter to her, an experience both helpful and, more often than not, unnerving. Beyond that, she sees visions, symbols in the environment, and a broken and warped reality.

The setup for the game is fascinating from both historical and mythological perspectives as well. A Celtic warrior who grew up in seclusion, Senua leaves home and finds love as an adult. Dillion, the man who could see past her battle with “the darkness” she combats, is slaughtered by vikings that raided her home. Afraid his soul is taken by the vikings and lost forever, she packs her sword and Dillion’s head and embarks on a journey to Helheim to confront the giantess Hel to save Dillion’s soul.

It can be difficult to follow the narrative, but in keeping with the theme of psychosis, that’s by design. Along the way she confronts several Norse deities ultimately leading up to the final confrontation with the giantess Hel. The more impressive thing, though, is the intense character development we see Senua go through as the narrative unwinds. Throughout her journey, we experience pain, desperation, fear, anguish, resolve, and hope through with a view from her consciousness. It’s both harrowing and endearing, experiencing the mind of people who suffer from similar mental issues. It’s not an easy tale to play through, but it is both engaging and compelling. 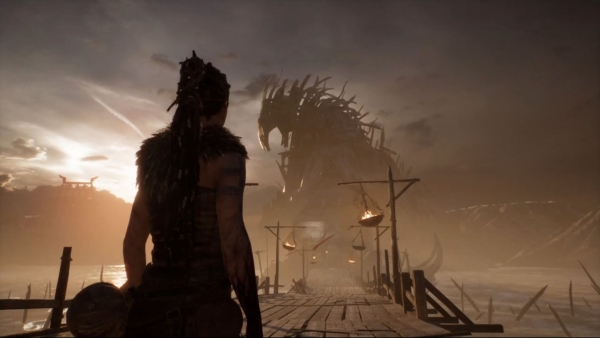 Uncharacteristically for Ninja Theory, the gameplay mechanics are the weakest aspect of Hellblade. Movement can initially feel awkward. Many of the game’s puzzles simply revolve around seeing shapes on a door then matching their outlines to the environment around you. For example, say you see a symbol similar to an “M” on the door. That could be found in the environment as two standing trees and two fallen trees. Once all the symbols on a door are discovered, it unlocks and you can move forward. The game does get more clever about how some of those symbols are hidden in the environment, but you’ll be scanning the horizon for them throughout the game.

On top of puzzle solving, the combat is actually quite enjoyable. Though I wouldn’t put it on par with DmC or Heavenly Sword, the cadence of combat is satisfying, often relying on dodges and parries to handle multiple foes. There’s a solid variety to the viking denizens you’ll face, from wispy warriors to hardened shield bearers to hatchet-throwing berserkers and more. There’s also a fun mechanic that allows you to invoke an iron mirror Senua wears on her hip to focus her mind, slowing enemies and giving our heroine a boost for a few seconds. Be careful of death though!

To the game’s credit, some of the later puzzles require more than simple pattern matching. As you delve deeper into Helheim and Senua’s mind, you’ll have to overcome some clever, more challenging puzzles. Some of Hellblade‘s best design work shines here, utilizing both audio and visual elements to present their challenges. 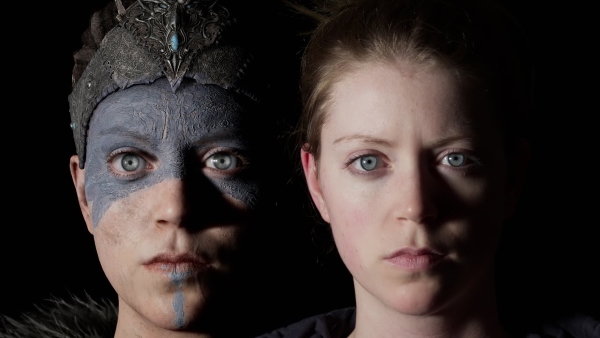 Speaking of audio and visual design, Hellblade has shown that Ninja Theory are masterfully utilizing the technology at their disposal. The game is gorgeous, bringing the dark, ancient world to life. It’s astounding to see how much Senua looks like her actress, Melina Juergens, (who’s also the company’s video editor). Water, beaches, the way light dances and plays on various surfaces; it all creates a palpable environment you can almost sense yourself stepping into.

Even more impressive than the visual design, Hellblade features some of the best audio work this author’s ever experienced in a video game. The game’s music is often muted though when it hits in big scenes, it’s empowering. The dialog is even more fascinating. The studio utilized a binaural microphone to record actors in three dimensional space. This comes out in the game beautifully as the voices in Senua’s head seemingly flutter around her, moving to and fro. As mentioned earlier, it’s harrowing, but one of the most engrossing audio experiences video games has yet to deliver as a medium. (Pro tip: Play this game with headphones on!) 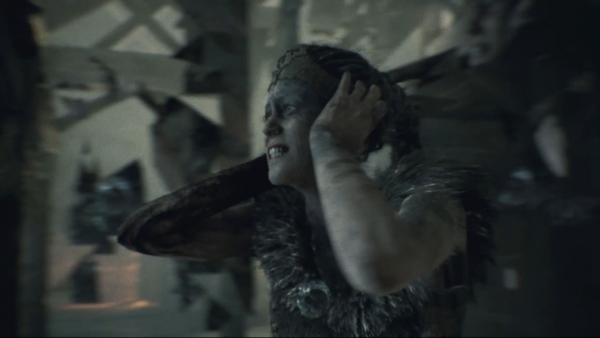 At the end of the day, Hellblade: Senua’s Sacrifice is an excellent game that shows the medium is mature enough to tackle difficult source material. The story is hard to follow but Senua’s character building and dialog are top notch. Though the puzzles can get monotonous, the act of fighting is fun and late-game challenges mix things up considerably. On top of all that, the game is gorgeous and the sound design feels fresh and engaging. While the aspect of experiencing psychosis may turn people off, Hellblade: Senua’s Sacrifice is a valuable title, capable of helping people empathize with something we too often shy away from. Released at half the price of standard retail games, it’s also available for a bargain price.

Hellblade: Senua's Sacrifice has shown that video games are mature enough as a medium to capably deliver an entertaining experience while respectfully tackling difficult topics. It's beautiful and emotionally engaging, worth every moment spent in the warrior's mind.