Leave this one in Hell 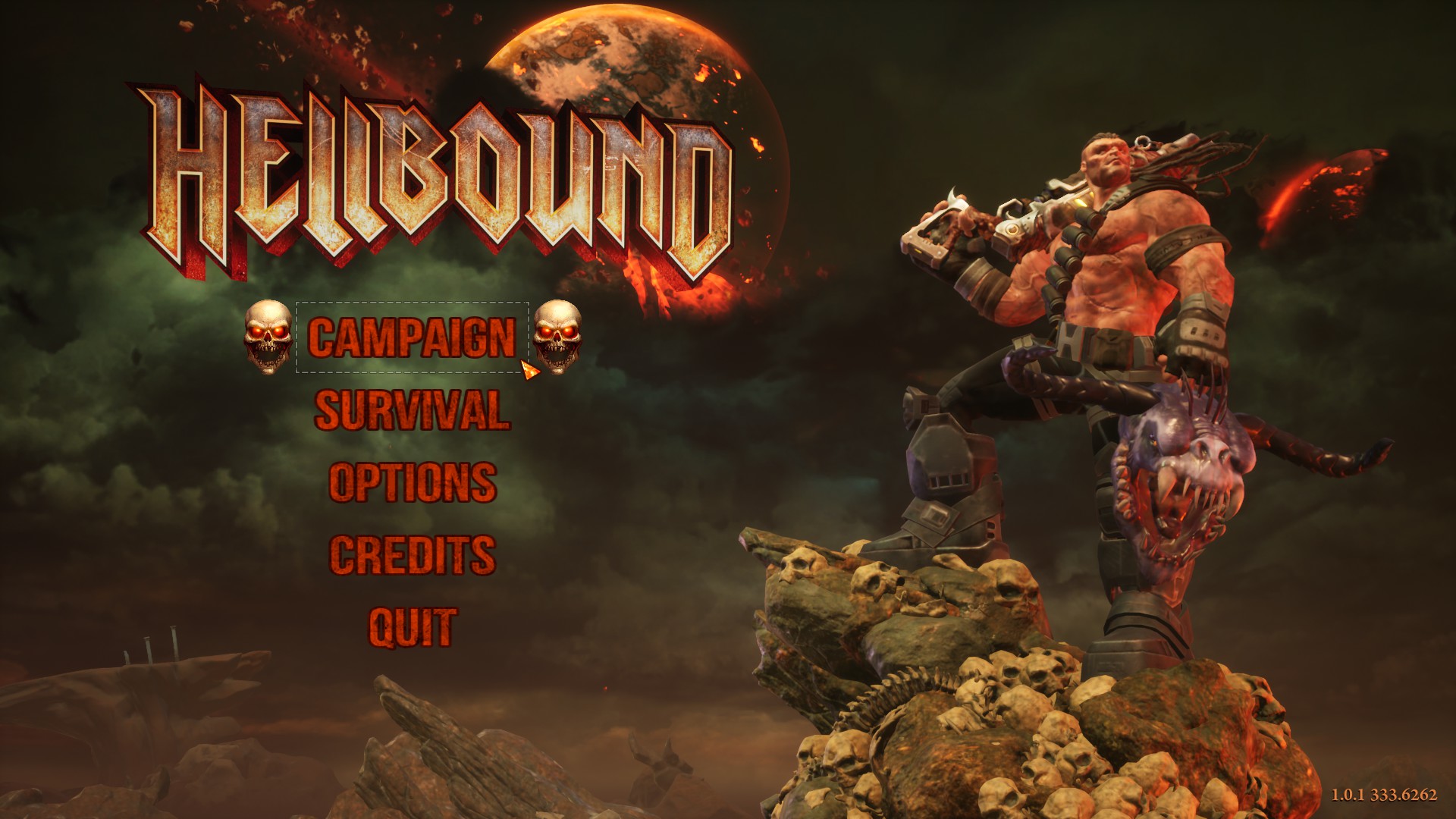 Hellgore should be cooler than he looks but honestly, he just feels like a cross between DOOMGuy and Duke Nukem.

When I got the chance to review Hellbound, I was eager to jump back into the demon-slaying madness of the classic 90’s shooters of yesteryear. Duke Nukem 3D, Wolftenstein 3D, Quake, and other classics always evoke a feeling of nostalgia, and each of these franchises has attempted to make a comeback with mixed results. Hellbound’s tagline reads “A 90’s shooter, 30 years later”, but it feels like a 90’s shooter living in its mom’s basement that still hasn’t made anything of its life after 30 years.

Hellbound is obviously not for the young ones. Many of us cut our teeth on the brutal, demon-slaying action in the original DOOM games, but those were in 2D, not 3D, and dismemberment and gore is plentiful and encouraged in Hellbound. The protagonist, Hellgore (yes, that’s actually his name), swears like a sailor and drops many an f-bomb, mf-er, etc. There is little-to-no drug use or sexual content, but blood, gore, and viscera are everywhere—it is Hell after all! 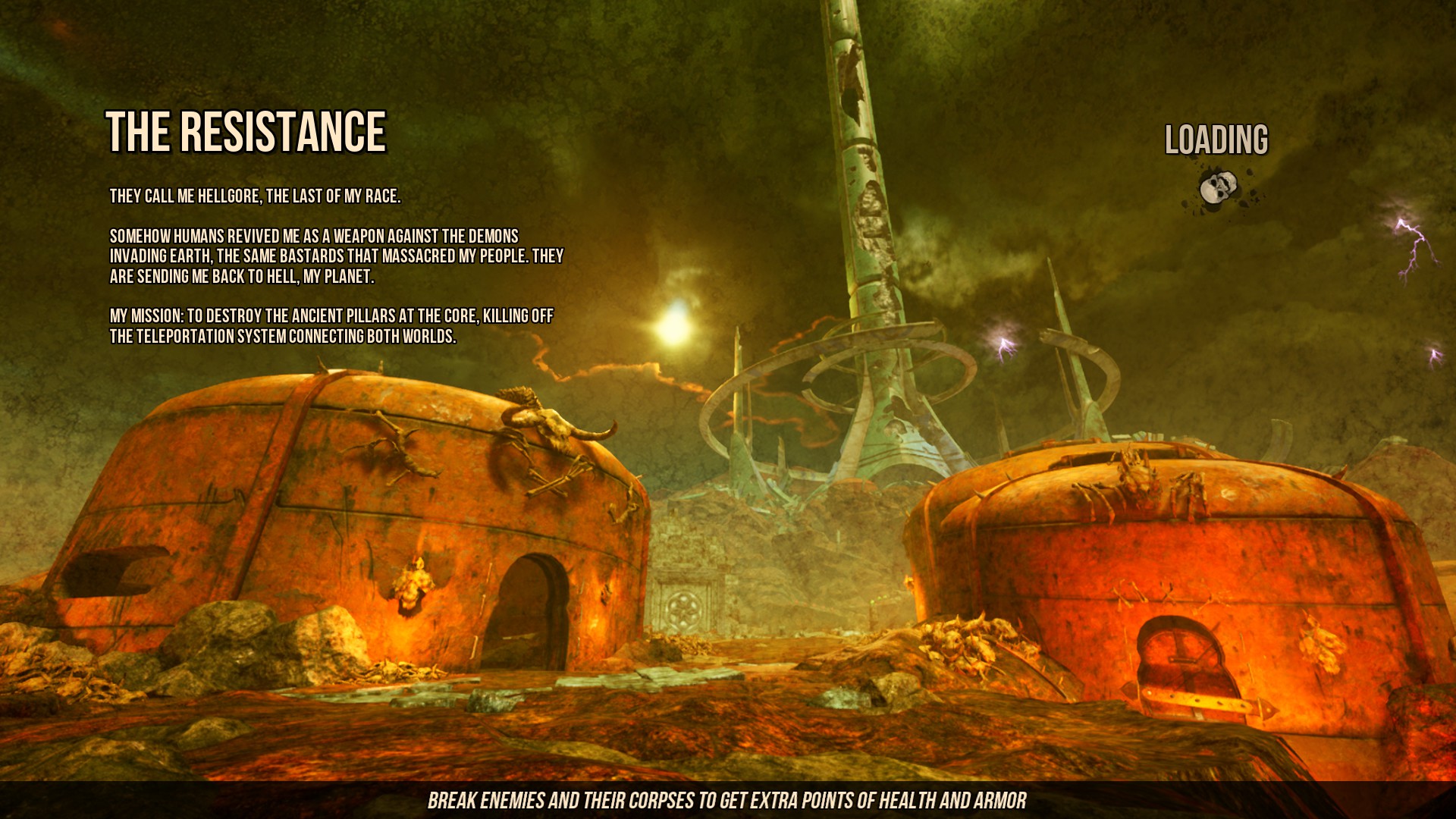 The story is mainly told through these little snippets of text before each level.

In Hellbound, players step into the shoes of demon slayer Hellgore, the lone survivor of a tribe that was massacred by the forces of Hell. This is about the only story exposition players get when they first boot up the game. Almost immediately, players are dropped into the action in the middle of what looks like a village that was recently consumed by the fires of Hell.

Gameplay is a carbon copy of classic 90’s shooters with fast, fluid, and chaotic action. However, my experience was marred by near-constant framedrops, freezes, and annoying glitches. When it worked well, it was fun and frantic, but when it didn’t it was annoying and I just wanted to stop playing. It can’t be that my PC isn’t up to the task since I can run more graphically demanding games—like the modern DOOM titles, for instance—with little-to-no issue, and Hellbound’s visuals are nowhere near that kind of quality. This is made even more confusing by the fact that you don’t ever really fight more than 4 enemies at a time in the earlier levels, so why does it chug so much? 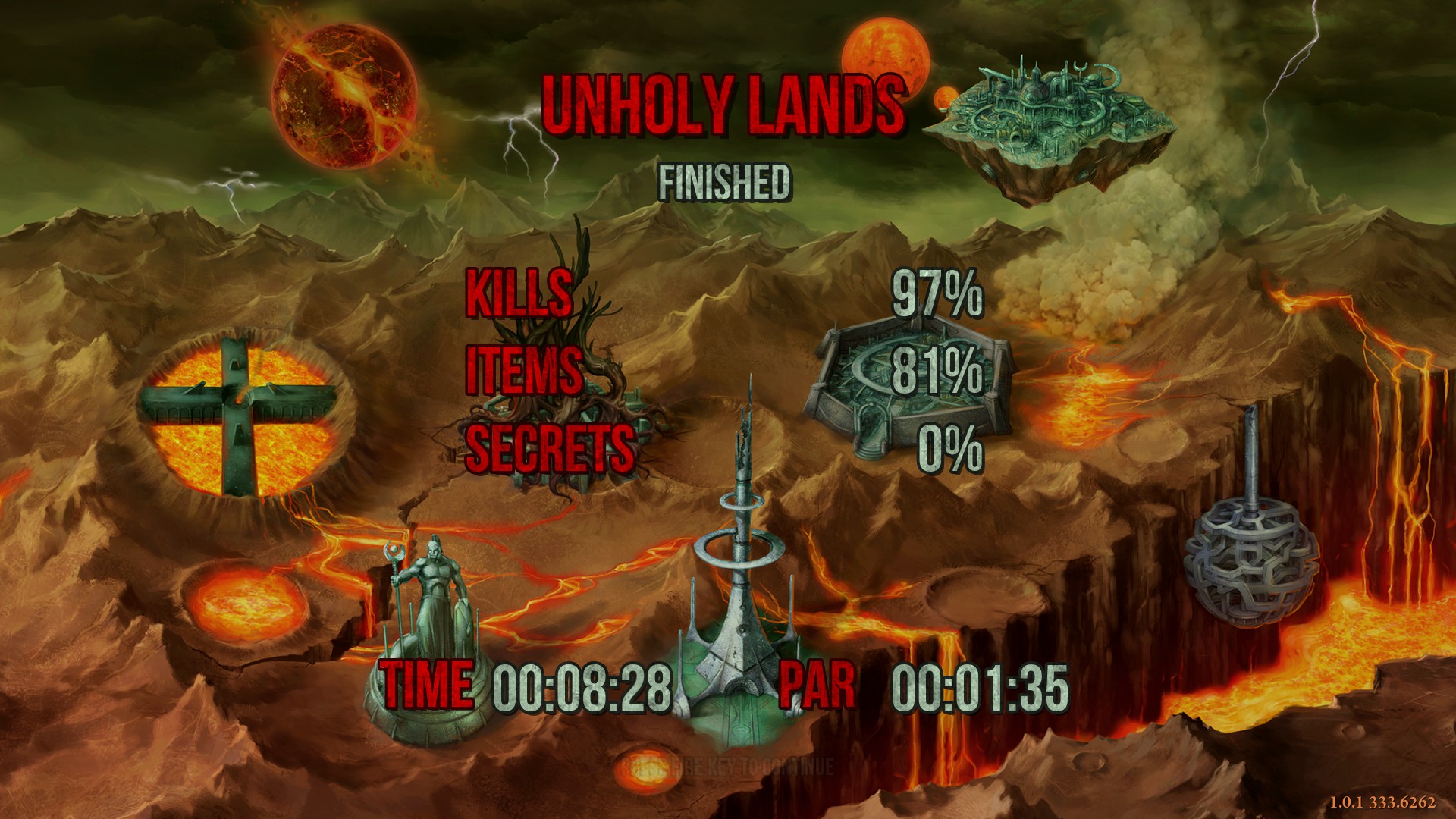 Much like in the original DOOM games, there is a breakdown of enemies killed, items collected, and secrets found at the end of each level.

To make matters worse, some levels played flawlessly with nary a hitch, while others became stuttering messes. This took the fun out of hunting for secrets, keys, and other goodies when I felt like I was trudging through quicksand every few steps. Taking a look at the Steam Community page and the accompanying forums shows that many other players have encountered glitches and bugs that bring down the experience tremendously. These can range from guns not firing at all when left clicking, to not being able to leave the loading screen when prompted to “Press the Fire Button” (my most prominent issue) as the game just did not register my clicks consistently. It’s unfortunate that the game released in this state as I haven’t played a game this buggy since Mass Effect: Andromeda.

There are only about three or four basic types of enemies in Hellbound. You’ve got your standard demons who fire back with a small assortment of weapons including a club, assault rifle, shotgun, and minigun. Then you’ve got the game’s equivalent to the Imps in DOOM. They shoot fireballs at you from afar and slash at you with their claws when you get close. A lot of their attack animations are even similar. My most hated adversary was the red, fleshy demon spawn that would charge at me in a similar fashion to the Kleer Skeletons in Serious Sam. These things are just as annoying to fight, as one or two hits can kill you, and heaven help you if you fight two or more in an open arena. It’s a sad day when I find the best strategy in an arena shooter is to lead enemies into a narrow corridor to pick them off one by one instead of just blasting everything that moves. But since shots seemed to only register some of the time, I often found myself dying more than I would’ve liked and had to incorporate cheap tactics and strategies to survive. 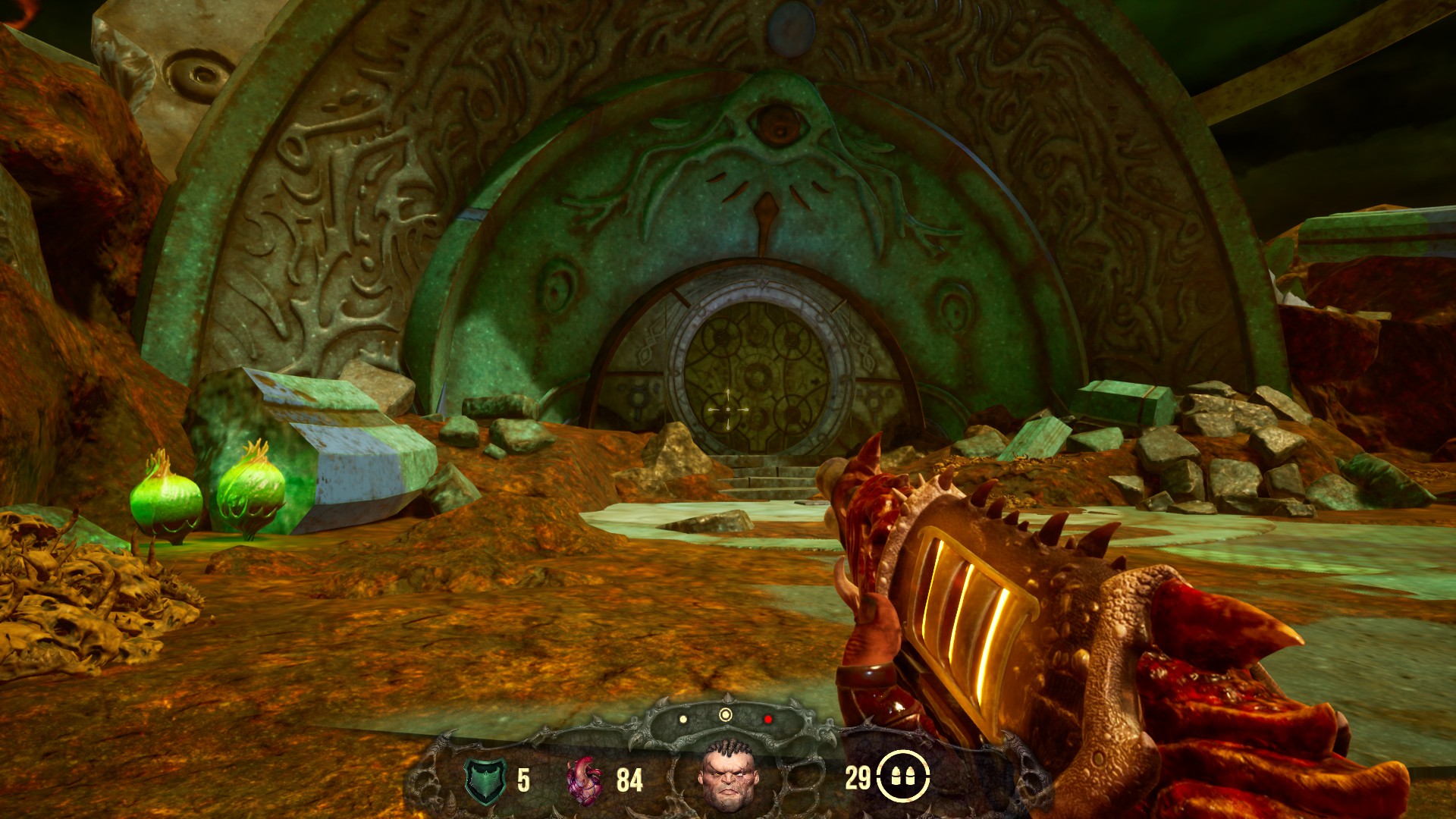 The level design is solid and the game looks nice enough, but it just doesn’t play as smoothly as one would expect a 90’s shooter to play.

Something else that may bother players is that in the first couple of levels, until you find the shotgun and club, ammo is very scarce and hard to come by, as are health pick-ups, depicted here in the form of floating hearts (actual hearts, not <3). This lead to me having to save after clearing every area of enemies since it’s rare to have your health above 20% in the more challenging fights. And with the platforming being finicky at best (it doesn’t even hold a candle to DOOM 2016′s platforming) I found myself getting damaged if not outright killed by lava just trying to nimbly jump between platforms in the middle of gunfights. Killing an enemy by blowing them to bits will often yield a small health pickup, but it’s usually only a single small heart which restores a whopping 1 health point.

There are some positives with Hellbound, though. I really like the design of some of the levels (of which there are only 6, with the 7th being the one and only boss fight in the game) as they most resemble the environments of the recent DOOM games. Sound design is also solid as the metal soundtrack absolutely kicks when combat starts to heat up. However, there are a limited number of tracks that play during combat (there may actually only be one?). 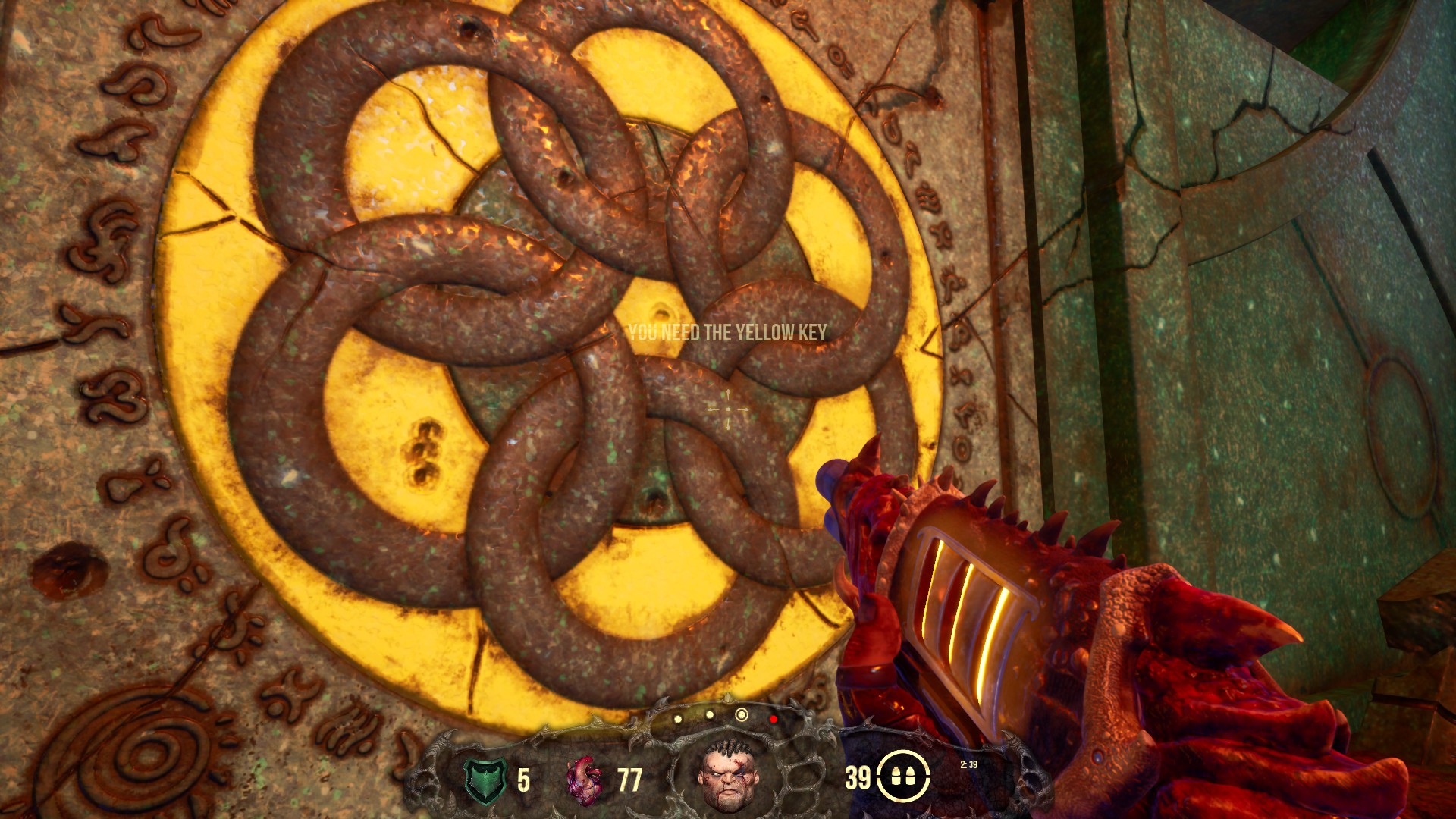 Ah yes. Yellow keys, I remember those! You’ve also got your red, green, and blue keys too. Everything you remember from classic shooters you’ll find in Hellbound.

One final point I’d like to address with Hellbound is the length. The developer actually issued a statement on their Steam page shortly after launch explaining that the reason there are only 7 levels is because they wanted to focus on quality over quantity. While the game boasts a Mostly Positive Steam rating, many of the negative reviews are complaining about myriad bugs that mar the experience and the very short (less than two and a half hours to complete) length of the game. I was appalled that once I got my bearings I completed the first couple of levels in about 15 minutes each. Perhaps what is most baffling is that there are no Steam achievements for Hellbound. Achievements could help tremendously to extend the longevity of the game for completionists and would offer additional challenges for players and a reason to return to the game. 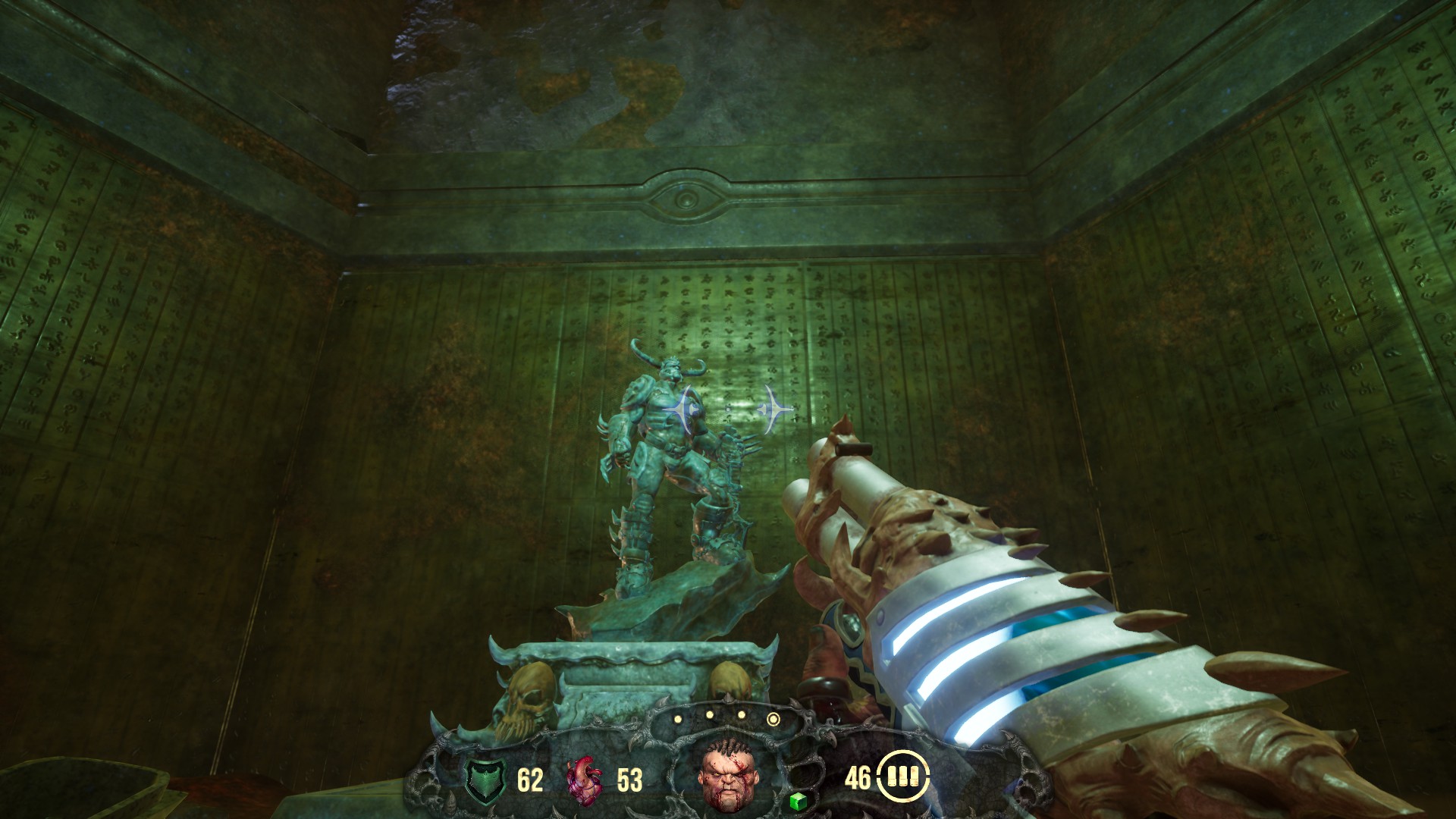 Secrets are plentiful and often lead to caches of ammo, health, and even some new weapons.

Hellbound attempts to return to the classic and beloved twitch shooters of the 90’s. It’s all about fast-paced battles against an often overwhelming number of enemies. While the game triumphs in some areas, like sound and level design, it falls flat in too many others for me to recommend it to fans looking for a sweet and bloody trip down memory lane. If you can catch them on sale, pick up either of the two recent DOOM games instead, or even Ion Fury as it is more of a love letter to the genre and a much better experience for fans of classic shooters.

Hellbound attempts return to the classic and beloved twitch shooters of the 90's, but falls flat in too many ways to earn a recommendation.