Going Out With a Silenced Bang

Agent 47, the master assassin who stands out like a sore thumb in a crowd but never gets recognized, is back. Hitman 3 is the final installment in what IO Interactive as dubbed the “World of Assassination Trilogy”. I picked up the first installment in this iteration of Hitman games wen it was offered as a free PlayStation exclusive. Though I had never played a Hitman game before, I was instantly hooked. The game’s creative environments and freedom of choice grabbed me in a way that few stealth games have. The second installment I found even more enjoyable than the first due to improved graphics and polished gameplay. Having thoroughly enjoyed the first two games, I was excited to sink my teeth into the third and final installment of this trilogy of games. What I got was nothing short of satisfying.

Violence: The Hitman series prides itself in how many different ways to eliminate targets it provides to the player. To list every form of death would take too long, but most involve targets being shot, stabbed, burned, poisoned, drowned, etc. Specks of blood fly when targets are shot or stabbed and puddles of blood are often left on the ground in the aftermath. The bodies of targets do not disappear after death and the player must hide or destroy them to avoid detection.

Language: Strong language throughout, including “f–k” and at least one use of “c–t” heard.

Sexual Content: Some female NPC’s wear low-cut dresses that show midriff and cleavage. Unconscious or dead male NPC’s can be stripped down to their boxers in order for the player to use their clothes as a disguise.

Drugs/Alcohol Content:  Lots of characters drink wine and smoke. The player can use a vast array of poisons to kill, sicken, or tranquilize targets.

Spiritual Content: Characters often take the name of God and Jesus in vain. An NPC makes a quip about “the ghost of Jesus, Gandhi, and John Lennon.”

Positive Themes: The various characters discuss the nature of power and its inherent corrupting nature. The Constant, the central villain of the game, believes that power corrupts all individuals while Agent 47 believes that power can be wielded responsibly by good-hearted people. Agent 47 is confronted with the dark reality of the amount of people he has killed to get where he is in life. A character sacrifices themselves in order to save the life of another. The theme of forgiveness is also surprisingly prevalent for a story about a professional hitman.

A convenience store late at night is an appropriate setting for an assassination.

The gameplay of the latest Hitman games are addicting to say the least. Hitman 2 was one of my most played games of the past couple years. The basic premise of Hitman 3‘s gameplay is that the player must assassinate various targets across multiple locations while avoiding detection. Along the way, the player encounters various obstacles including guards, security cameras, and natural barriers. What separates Hitman from other stealth games is the vast variety of ways in which these obstacles can be overcome. The player can incapacitate NPC’s, acquire disguises, and simply sneak around areas in order to reach their objective. 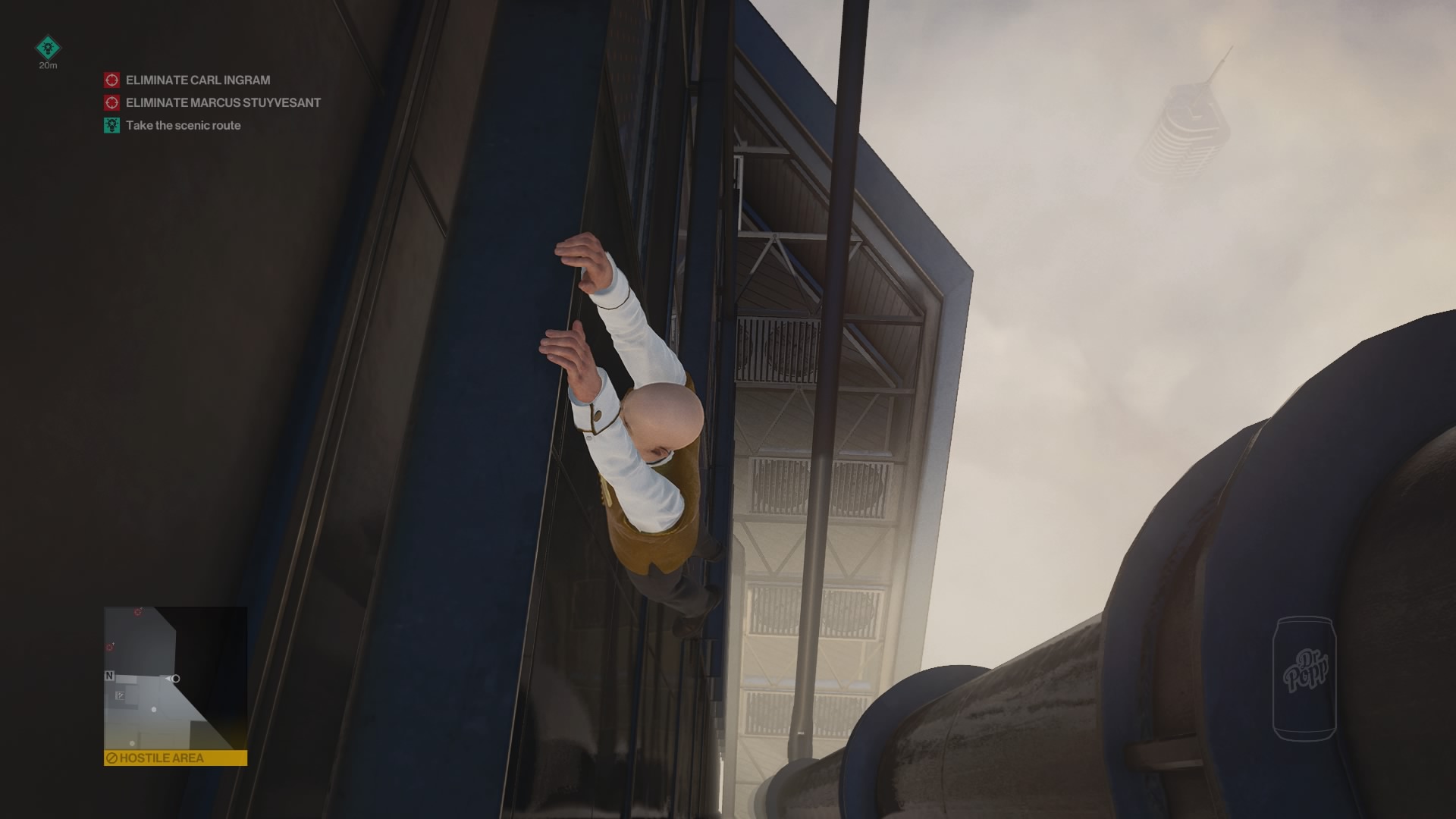 Eat your heart out Tom Cruise!

Hitman 3 takes the established gameplay of the previous Hitman titles and polishes it. Agent 47 now has a camera that allows the player to hack door locks and complete different objectives that involve taking pictures. Trespassing into restricted areas now makes an audible sound that warns the player. While these changes don’t radically enhance the gameplay, they do keep the gameplay fresh for those who have played the previous two games. For fans of the franchise thus far, the gameplay is satisfying but it may be disappointing for those who were wanting something a bit more innovative. 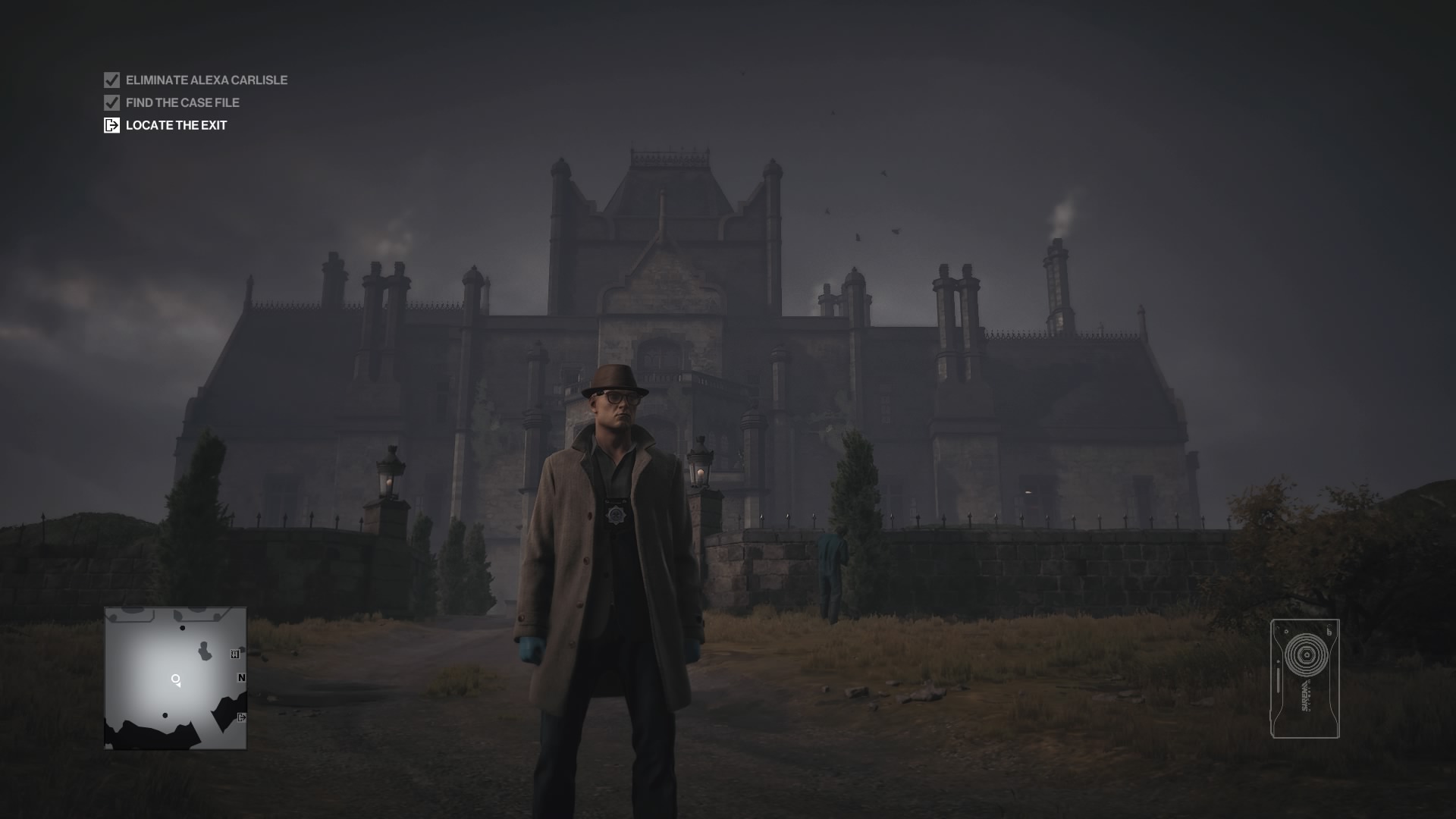 A murder mystery in which you are the detective and the murderer.

The graphics of Hitman 3 are nothing short of top-notch. Simple things such as neon light reflected off of different surfaces or beads of rain on Agent 47’s bald head were enough to make me pause and stare. Given how many things are happening at the same time in the game’s environments, its impressive that the game looks as good as it does. While other games to come out in the past few months have struggled on the previous console generation (not naming any names…), I can assure players that Hitman 3 performs just as well as games released during the previous generation. 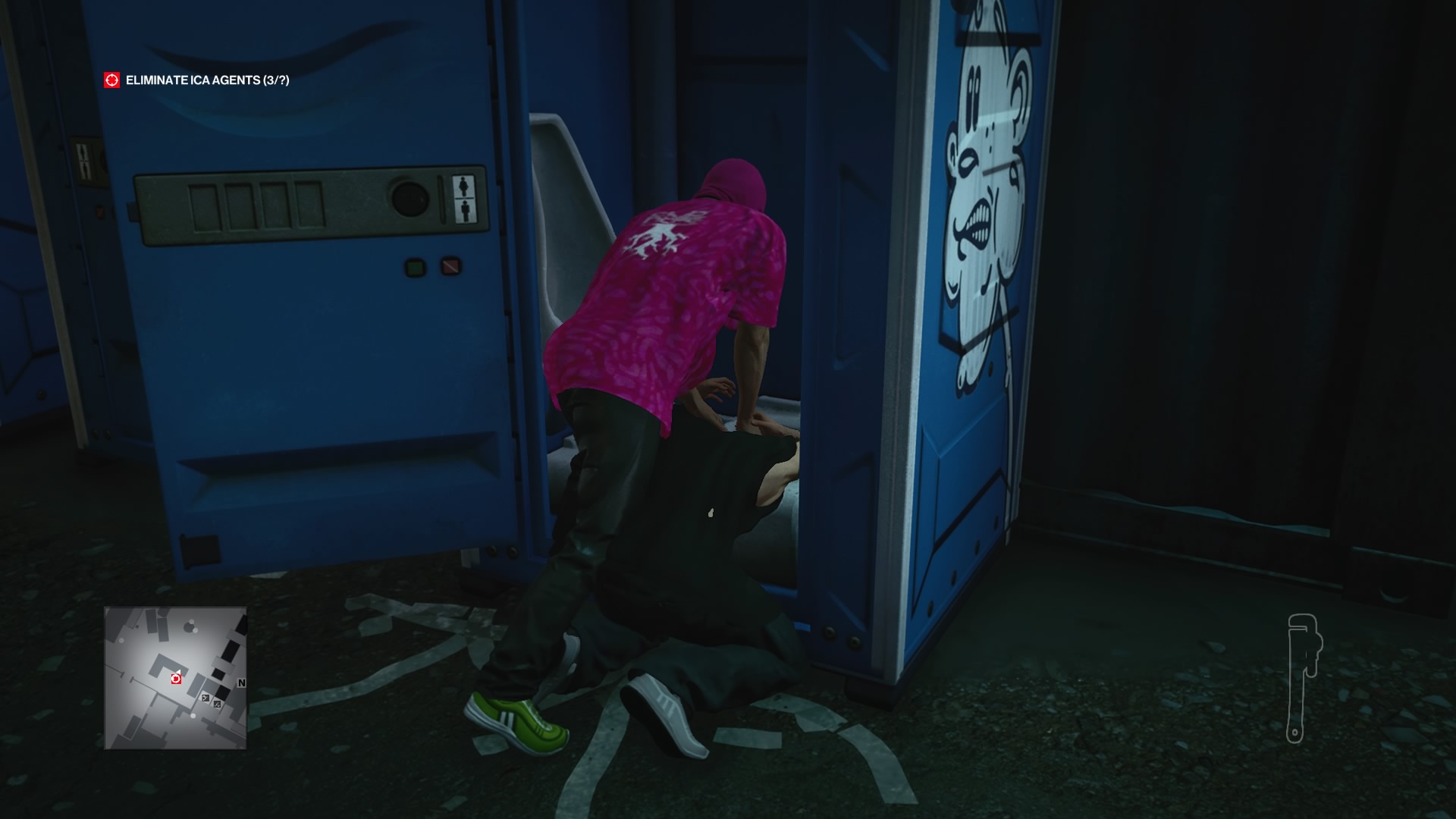 Unfortunately, while playing I did experience a few glitches. These tended to be mostly minor, such as seeing NPC’s clip through one another. The most severe glitch I experienced was getting Agent 47 stuck on a part of the environment that he wasn’t supposed to be able to access. Thankfully I had saved recently and was able to reload not too far back from where I was before I got stuck. This was the only game-breaking glitch that I experienced, and hopefully updates will patch these up. 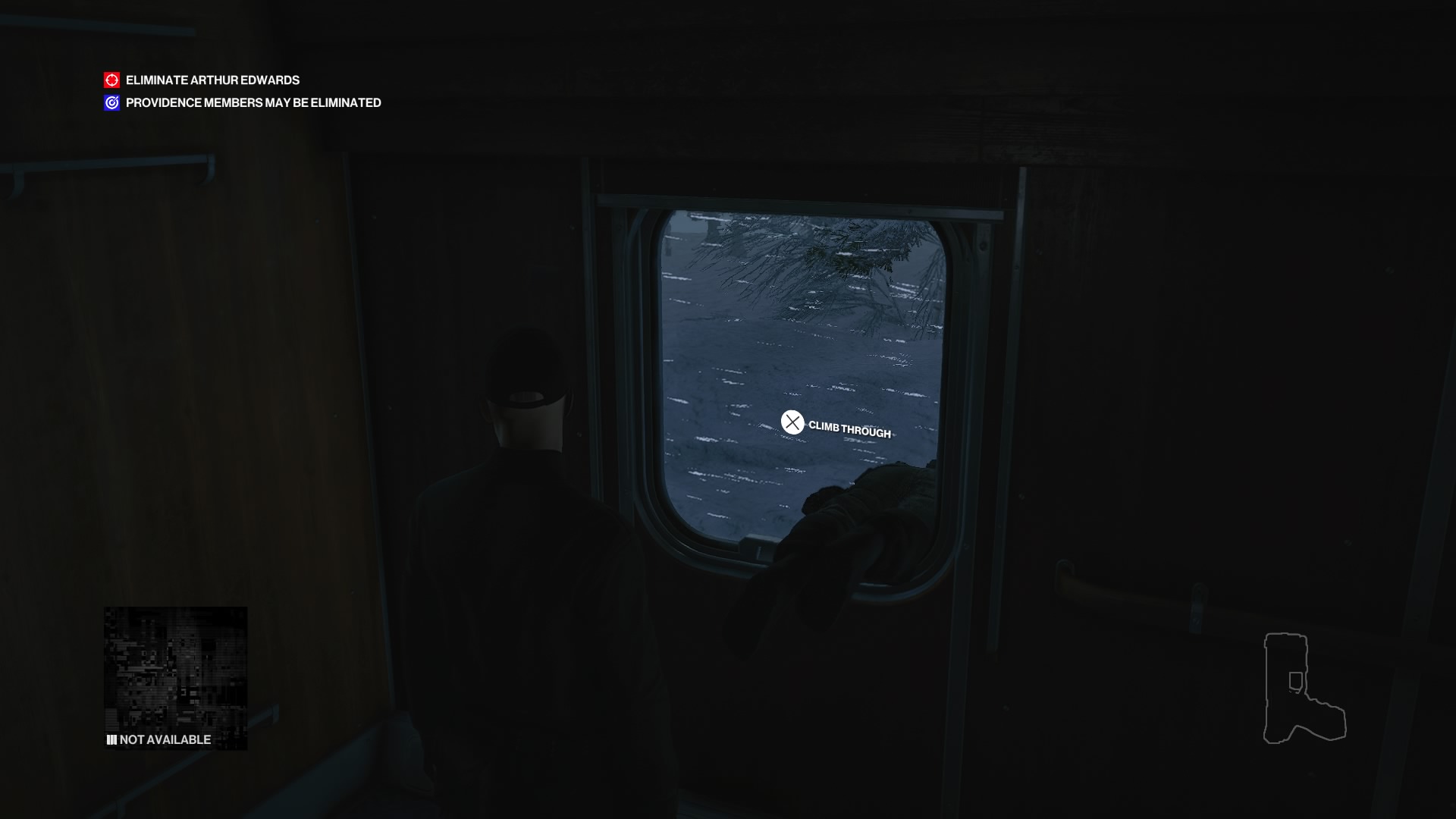 The window is closed. Pretty sure the human body doesn’t do that.

Outside of the main campaign, the player is able to complete certain challenges that tend to involve assassinating a target with very specific parameters set in place. These challenges steadily increase in difficulty and while they are sometimes frustrating, provide a profound sense of satisfaction when completed. The game also allows players to create “contracts” and submit them to the community. The contracts are custom missions that players can create in the various levels of the game. If the player has purchased Hitman (2016) and Hitman 2, the player can compile their data so that they can access all the levels and challenges from the previous two games. Hitman 3 also includes a free virtual reality mode for players who own a VR headset. These extra inclusions help the longevity of the game and encourage the player to keep coming back for more. Overall, while Hitman 3 doesn’t innovate much from the previous entries in the series, it falls back on what the series has done best and polishes it.

With the previous two games in the “World of Assassination Trilogy”, the story was mostly pushed into the background. For the most part, the plot served as an excuse to get Agent 47 to various exotic locations to take out an eccentric and diverse set of targets. The basic story of the trilogy follows Agent 47 who, with the help of his handler Diana Burnwood, fights to uncover and take down Providence, an international secret society pulling the strings of global affairs from behind the scenes. (Spoiler Warning for Hitman 2 ahead, skip to the next paragraph if you haven’t played it yet). The end of Hitman 2 saw Agent 47 capture the elusive Constant, the head of Providence, and begin to question him regarding 47’s lost memories. This seemed like the conclusion to the story until the Constant revealed that Agent 47 assassinated Diana’s parents when she was a girl. This final revelation was a huge shock and left much anticipation as to how Hitman 3 would capitalize on this reveal.

Thankfully, Hitman 3‘s story delivered on that hook much more than I was expecting. The relationships between the characters come to a head in shocking ways that keep the story engaging. Like most great spy stories, there are several major twists and turns that keep the viewer on their toes. The story’s conclusion is aptly fitting given the buildup and contains touching themes of forgiveness and poetic justice. The plot may not be wholly original, nor does it compare with the greatest stories of gaming, but it was far more engaging than anything I had previously experienced in this trilogy of games.

The typical Hitman formula for the gameplay is also changed up to accommodate the story. One of my favorite levels involves Agent 47 being stripped of all his typical gadgets and having to assassinate various agents in a crowded club who are hunting him down. The greatest example of the gameplay reinforcing the story comes in the final level of the game. In the final level, the player is allowed to kill EVERYONE in the level (something normally penalized by the game) in order to reach the last target. It is a morbidly satisfying end to the game and the trilogy as a whole. Overall, I found the story of Hitman 3 to be a massive step up from the first two games and it kept me more determined to see the campaign to its conclusion than previous games had. 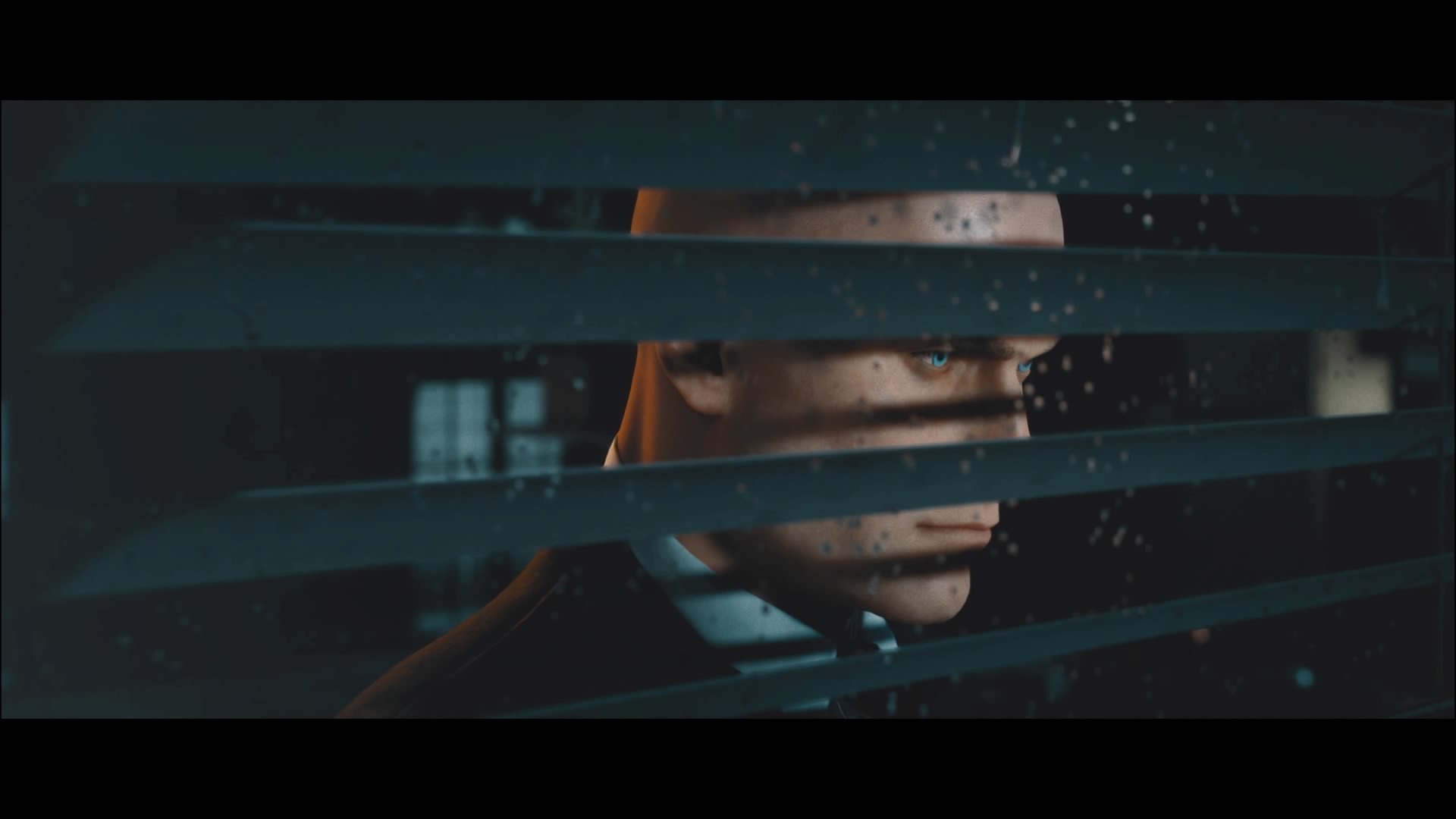 Hitman 3 is without a doubt the strongest game in the “World of Assassination Trilogy” and possibly in the whole Hitman franchise. The mechanics established all the way back in Hitman (2016) have been perfected masterfully to meet the current era of gaming. The graphics are as gorgeous as they have ever been and the attention to detail is incredible. The story ends on a satisfying note that wraps up the arc of this trilogy in great fashion. The ability to port over progress from the previous two games and the addition of DLC ensures that there is no shortage of content for players to enjoy. The free inclusion of virtual reality is also a great added bonus for those who are able to take advantage of it. All in all, it is about as close to a perfect Hitman game as one can get. There is not much else to say other than, “Good hunting, forty-seven.”

The classic Hitman gameplay is as polished as it has ever been and it's campaign provides a surprisingly satisfying conclusion to Agent 47's journey.