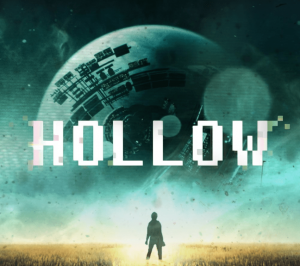 Over the first year of the Nintendo Switch being on the market, we have become accustomed to the benefits of more developers porting their titles over to the console. This has resulted in many surprisingly solid ports with just a few lacking in the conversion. One such title comes from developer MMEU, bringing over their hybrid first-person shooter/exploration-horror title Hollow. Unfortunately, while the premise is intriguing, Hollow is not difficult to play from it being this harrowing horror world, but rather difficult to play for almost all the wrong reasons.

Spiritual content: While exploring the derelict ship, you will come across crude ritual sites that can appear to be satanic, although that’s not stated in the game.

Violence: Hollow is littered with blood, gore, and disturbing imagery once the enemies start attacking early in the game. You are able to kick or shoot enemies and they will moan in pain and agony with each attack landed. The enemies will violently pursue you with a red hue coming around your vision as you are slashed. Some parts of the environment are covered in blood, and former crewmates of the ship you’re on appear to be brutally mutilated with their remains intentionally left for display.

Language/crude humor: F***, d***, s***, are used multiple times by the character you play as and with in-game text from messages found.

Sexual content: Blatant nudity is on full display here, but not of the overt sexual type. Some of the enemies you encounter are completely naked and have humanoid appearances with all anatomy parts exposed.

Hollow is a first-person shooter at heart, but doesn’t feel or play in the traditional sense as a FPS. The core gameplay revolves around deep exploration that’s eerie as you proceed through strangely empty corridors in search of survivors. The character you play as has amnesia and your goal is to try and uncover who you are, what you are doing on this ship, and what is actually going on.

The gameplay is more in line with deep exploration and goes at a very slow pace. If you are the type of player who likes to run into any situation with guns blazing, Hollow is most likely not the game for you. The story takes awhile to actually pick up, but once it does it gets mildly interesting. Unfortunately, for most of your playthrough, you will be backtracking repeatedly to find notes and ammo in cabinets due to the ammo being sparse. As you wonder the dark hallways, there is a constant feeling of dread with the music accentuating the horror aspect and the grainy filters displaying how dim and badly lit the corridors actually are. This makes the atmosphere very intense as you explore the spaceship; the intentional background noises don’t help settle the mood either.

While exploring, you will come across messages that have been left for you to find. These messages often will point you in the general direction you are supposed to go, and provide a clue to who you really are. Watching your surroundings is paramount to advance the story, and a few times I missed important messages that were harder to find than they should have been, which was frustrating. Getting lost and roaming the halls for hours is not a fun way to spend a gaming session, and Hollow could have been less cryptic in providing these clues. Hollow does not hold your hand when it comes to advancing the story, and you need to actually find each interactive item for yourself.

You can control the speed at which your character moves by pressing in the L analog stick, although he moves slowly even at the “run” speed. You are also able to jump, kick, crouch and shoot a special type of gun with most of these actions not having much use beyond some story segments. You are able to bring up a 3D view of your map to supposedly help point in the right direction, but it never really helps at all, and there is always the feeling of something much more sinister at work. Finally, there are syringes you can find that will heal you when damaged.

Eventually, some disturbing enemies will appear on the ship. If they detect you, they will run at you with reckless abandon. The best way to neutralize any enemy is by shooting a few rounds into them, and then they will disappear. If you run out of ammo, you can kick an enemy to slow them down, but that’s generally the only use for kicking. The gameplay loop constantly revolves around kicking the enemy to have them fall down, you run away, they get up, and then they always end up catching up to you. The problem is that usually right around the corner is another enemy, and oftentimes you are constantly being chased by enemies without any way of combating them unless you have ammo.

Hence, my main problem with Hollow is that it doesn’t know what it wants to be. There is not enough ammo for it to be a shooter, yet there are too many enemies for me to enjoy it as a survival-horror experience. Exploration and finding clues should have been the main draw for Hollow with its outstanding atmosphere and yet, once you find the gun you end up just blasting your way through the story. Lastly, most places to search aren’t distinguishable unless you are right on top of the area, and this doesn’t add to the survival-horror experience.

Technically, Hollow runs terribly when a new area is being loaded and when there are a few enemies on-screen at once. When playing docked, the game does play much better; still, it’s unfortunate Hollow plays so poorly in handheld mode. Luckily, the music does a fantastic job of fitting in with the themes and overall exploration of the title. This is why it’s such a shame when the music that plays when enemies are coming towards you is in this continuous annoying loop.

Overall, even with the horror atmosphere and music standing out, Hollow is somewhat of a mess. The combat is not fun, exploration is tedious, and the porting over to the Switch is mostly sluggish and technically questionable. If you must play a horror game on the Switch, Hollow can suffice when played docked. Otherwise, there are more deserving horror titles worthy of your time. Lastly, due to the blatantly mature nature of the content at hand, it may not be worth playing due to many other solid survival-horror experiences available.

Review originally published by Josh Brant, and has been restored after a website outage.