A Deep Freeze You Wont Mind Getting Caught Up In 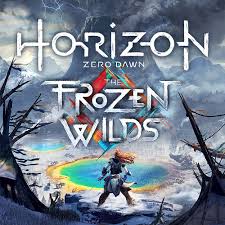 Horizon: The Frozen Wilds is the much anticipated expansion to Horizon: Zero Dawn. Offering a new and rather large section of the already massive open-world map, The Frozen Wilds also cranks the game’s difficulty up to 11 with more challenging machines for Aloy to battle. Aloy must not only contend with the unforgiving snow and ice of the harsh mountains the Banuk call home, but a menacing volcano has caused the machines to go into a frenzy and a new, gorilla-like machine called the Frostpaw stalks her every move. All the while, Aloy searches for clues about the mysterious past of her old frenemy, Sylenz. 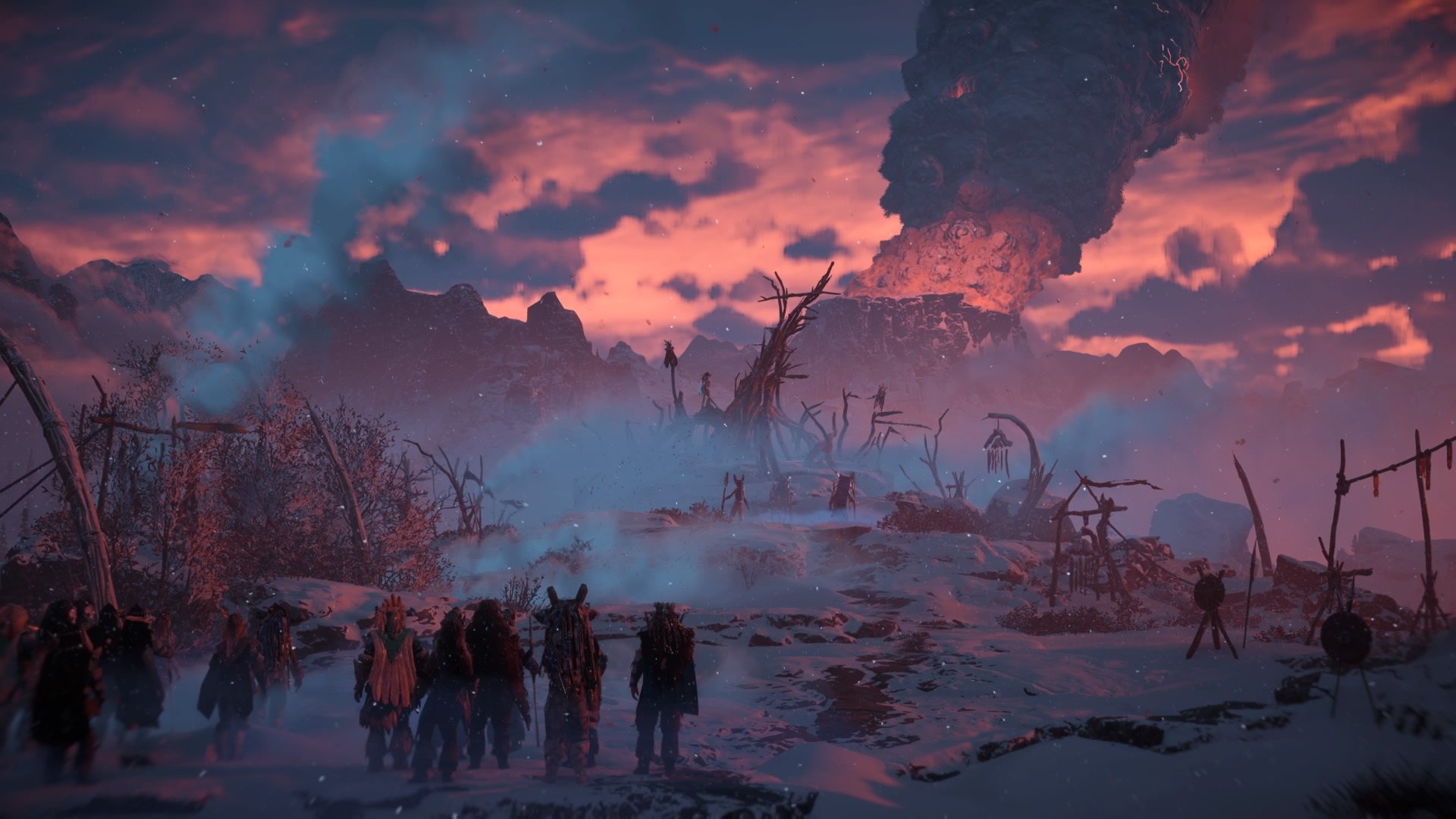 Horizon is still easily one of the best looking games I have ever seen.

The Frozen Wilds offers much of what came in the base game with regard to content. There is coarse language in many of the audio logs found throughout Aloy’s travels in this new environment, and the machines are more menacing and bloodthirsty than ever. Gore is still infrequent to non-existent, but blood is present and is often used to track NPCs as part of a sidequest such as discovering more about what happened to a group of scouts who went missing trying to find out what corrupted the machines. There is also the underlying theme of religion throughout all of the tribes in The Frozen Wilds. Much like in the base game, you have your Christian-like group who worship a single deity, the All Mother, the cultists who worship the sun, and the Banuk who seem to worship nature and/or idols they have created from the scraps of fallen machines, going so far as to infuse certain parts into their own skin. 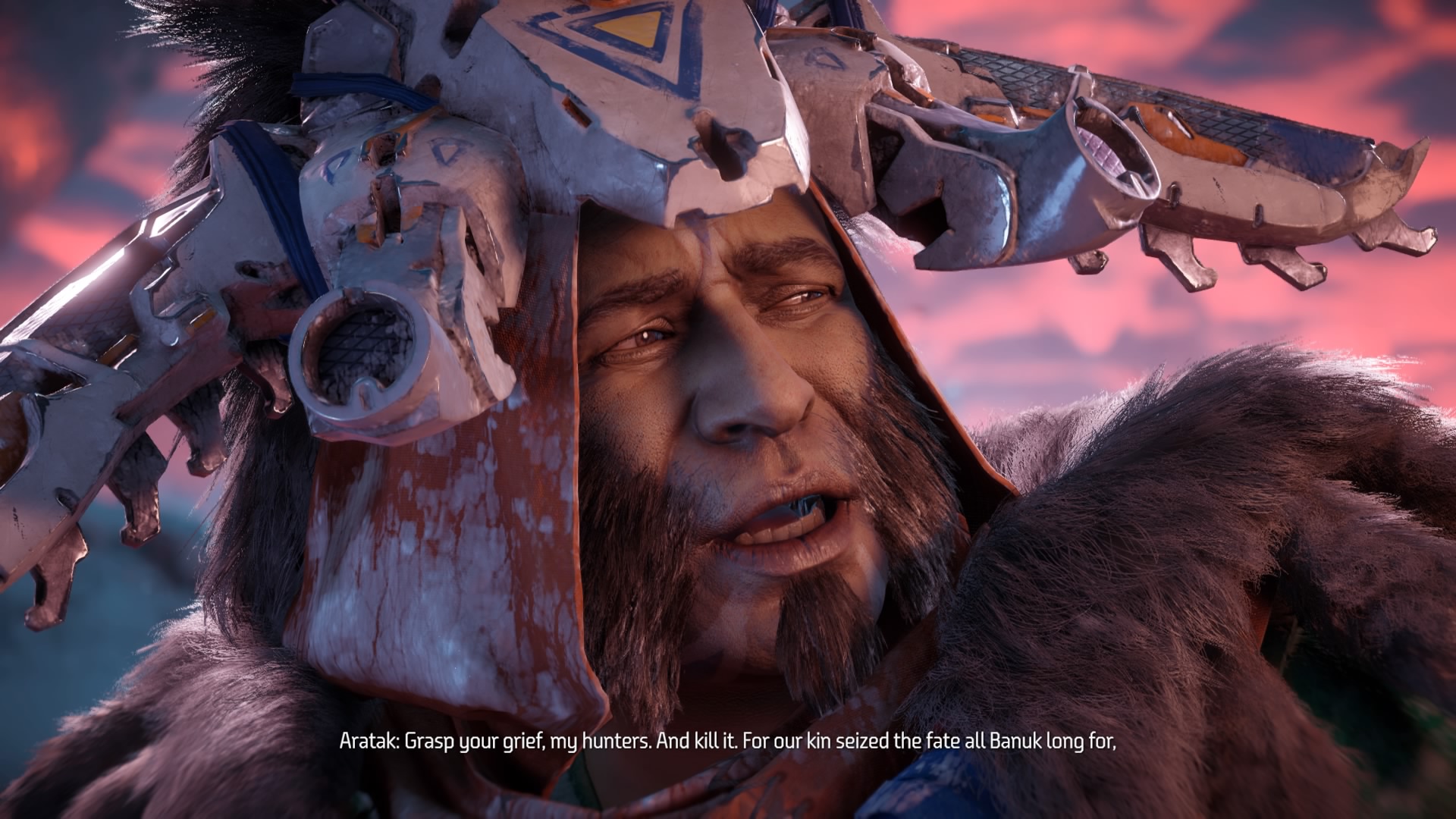 Aratak is one of the new characters Aloy will come across during her journey in The Frozen Wilds.

I feel the need to preface this review by stating that Horizon: Zero Dawn was one of my favorite games of 2017 and my personal choice for Game of the Year (GOTY). The lush, unforgiving open world, with it’s diversified weather and breathtaking beauty nearly stole the show when the game launched back in February of 2017, about a week before the Switch and The Legend of Zelda: Breath of the Wild hit store shelves. Normally, going up against Nintendo and a heavy-hitter like the Zelda franchise spells certain doom for a new IP. Against all odds, Horizon persevered and stood out as one of the best open world games of the year, and arguably, one of the best of all time. 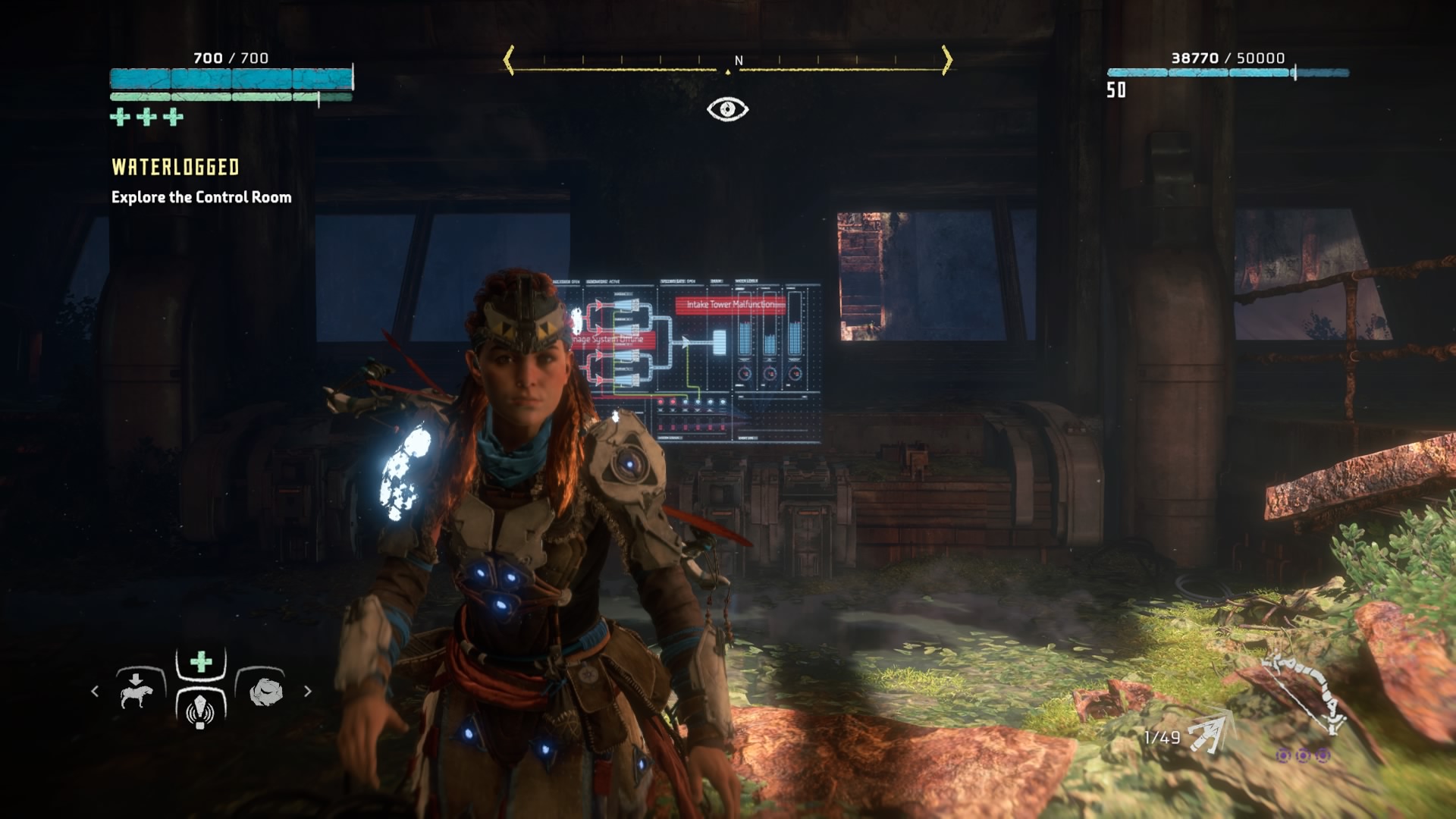 Exploring old bunkers for audio logs and solving puzzles for rare crafting materials and upgrades is still prevalent in The Frozen Wilds.

Horizon’s recent expansion, The Frozen Wilds, launched on November 7th, 2017 and made what was already a masterpiece of a game, somehow even better. At first, I didn’t like how developer Guerilla cranked up the difficulty to almost Dark Souls levels of sadistic punishment. But the more I played, the more I realized that I love what they have done with the game. By increasing the difficulty so drastically, the developers have made the game new again, even if the expansion offers only 20 more hours of gameplay.

Perhaps one of the best things about the increasingly harder enemy encounters is that they force players to rethink their previous approach to combat from the main game. That slick piece of armor unlocked towards the end of the main story is now essentially useless against the machine enemies Aloy squares off against in The Frozen Wilds. However, players shouldn’t fret as there are plenty of new vendors and upgrades available so newer, better gear it not hard to come by. There is a caveat though. These new items can only be obtained using a new currency known as Blue Gleam. This currency is exclusively used by the Banuk tribe and is somehow tied to why the machines are acting so violent and aggressive. 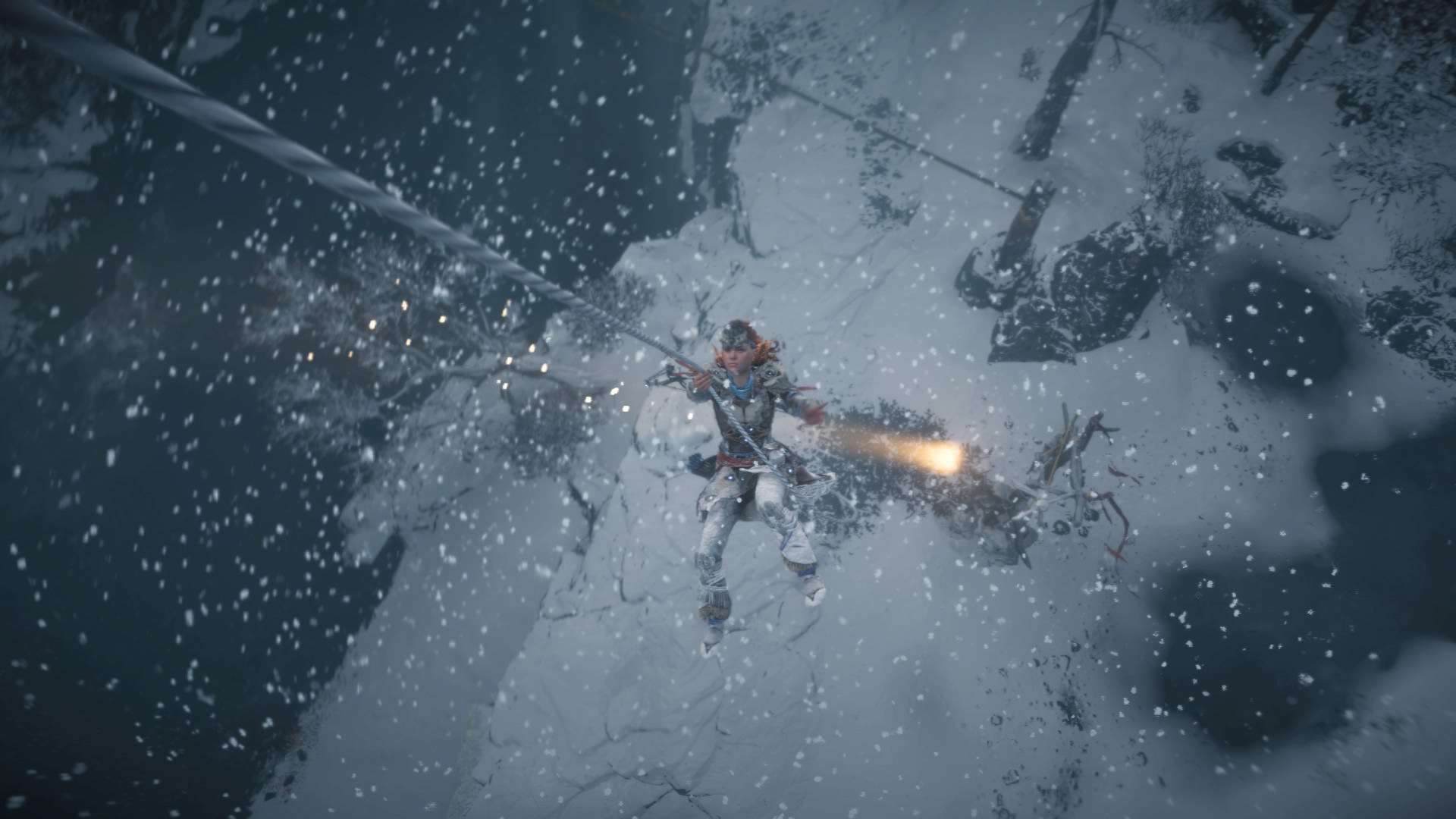 One of Aloy’s flashy animations as she repels off of a cliff after reaching a previous quest objective.

There is also the addition of new control towers, which look like giant machine flowers that protrude from the ground. These devices emit a signal that disables the recharge for the shields on Aloy’s Shieldbreaker armor and alert enemies in the area to her position. Players have a couple of options for dealing with these machines; overriding them allows for Aloy to approach combat from the shadows and stalk her prey one by one, while attacking head-on means that players can simply destroy the tower, but doing so will trigger quite the fight afterwards.

Aside from new bows, slings, and armor to obtain, there is also a new side-mission that can be completed which allows Aloy to upgrade her melee weapon, the spear, for the first time. While most players are probably using a certain character’s spear from the base game, there is the option to obtain a new one and add upgrades to the existing one if players so choose. There are also new machines to override and new mounts to ride. The level cap has been increased from 50 to 60 and new abilities will become available to Aloy as players experiment with the new branches of her skill tree.

The expansion’s story is intriguing and has that same air of mystery and foreboding that the base game thrived on. Aloy is as strong and independent as ever in this story though it was nice to also see how human she truly is as she shivers and complains about the cold the higher up the mountain she ascends. It is also nice to see more development of Sylenz’ character as well though he was nowhere to be seen during my time with this expansion. 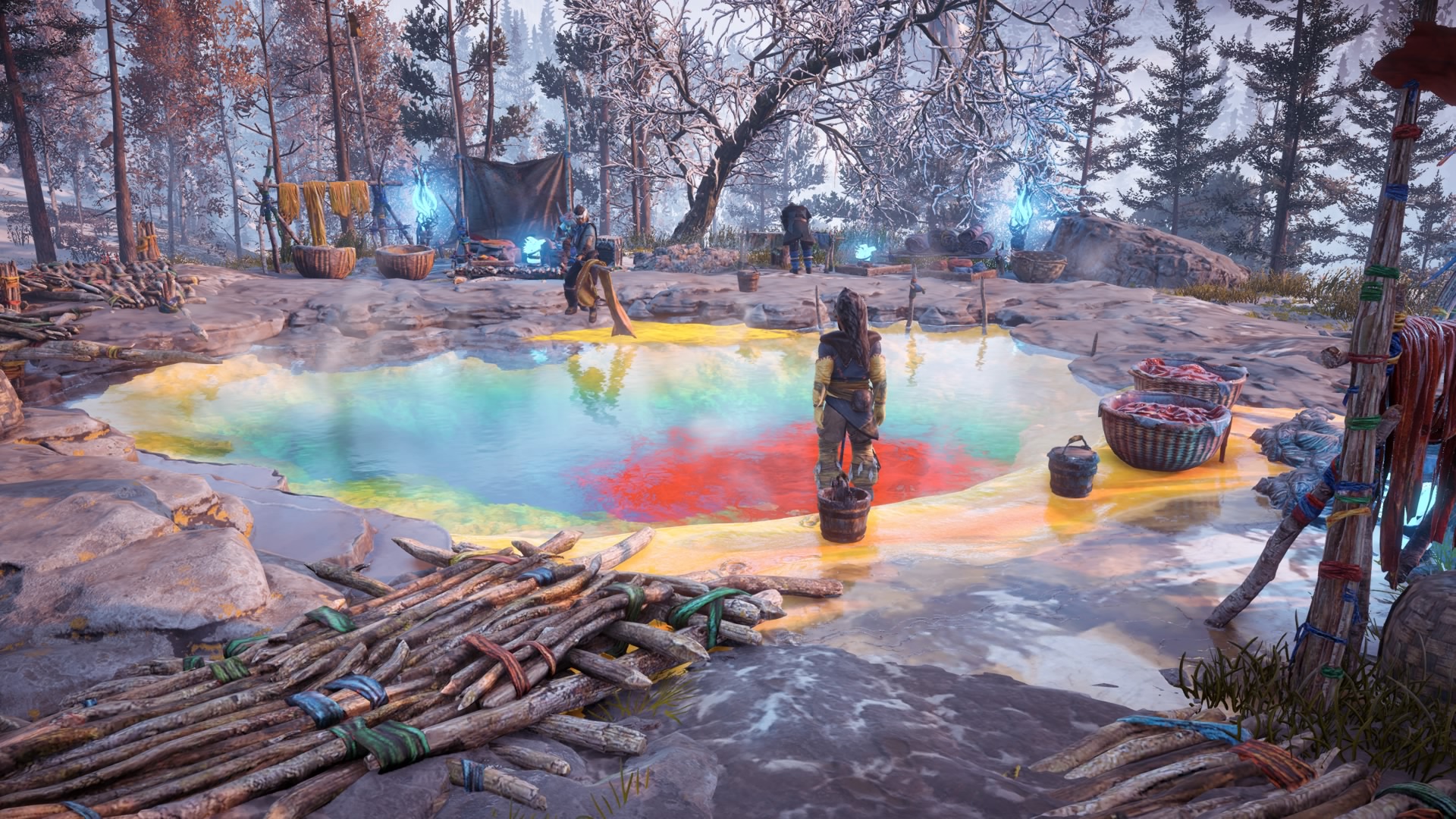 The lighting from the torches, the reflections on the water, and the coloring in this shot show only a fraction of the beauty the world of Horizon has to offer.

My absolute favorite part of the new expansion though would be the additions that have been made to the game’s photo mode. There are several new filters, borders, poses, and other features that allow players to really capture the beauty and wonder of Horizon’s world. Again, I probably spent the majority of my time playing around in photo mode than I did playing the game itself, which is not meant to discredit the quality of The Frozen Wilds in any way because this is, after all, a chance to experience more of what is possibly one of the best games ever made.

If you haven’t already played Horizon: Zero Dawn, then now is the time to do so. There are frequently sales on the new, complete edition of the game, which includes The Frozen Wilds and other DLC goodies for the same price as the base game. As I stated in my original review, Horizon is an experience that no gamer should miss out on and is one of the best games that I have ever had the joy of experiencing. It is a perfect example of what makes games so mesmerizing as an art form, and allows us to connect with the world and characters the developers have created in ways not often experienced in video games.

Horizon: Zero Dawn, and its expansion, The Frozen Wilds, is a game that should not be missed. Whether you are a Sony fan, Nintendo fan, or a Microsoft fan, you owe it to yourself to go and buy a PS4 if you don't already have one, and play this game. It is easily worth the cost to experience once of gaming's increasingly scarce masterpieces.