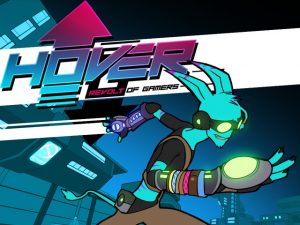 When I discovered the existence of Hover: Revolt of Gamers, my hype level ascended the the stars due to its oh-so non-coincidental resemblance to Jet Set Radio. However Back in May, we wrote a preview of the game during its time in Early Access, and my experience diminished my anticipation for the final product. During that process, I itemized several elements that needed to be addressed. Unfortunately, very little has noticeably changed. 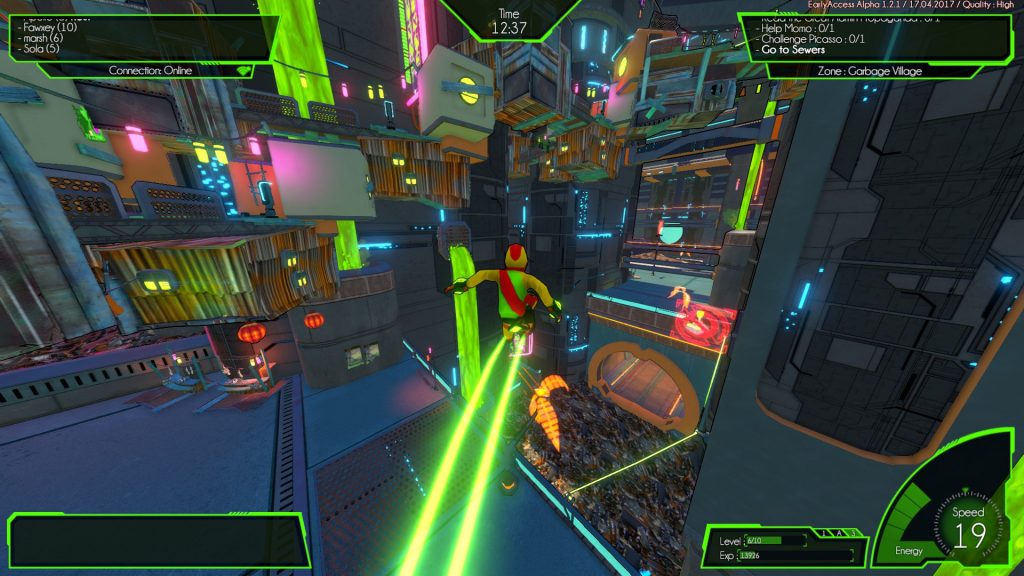 In Hover, screenshots look busier than the game actually is.

In my initial draft of this review, I experienced a Freudian slip, captioning this section as “Cartoon Guide.” This is because Hover: Revolt of Gamers pairs its brilliant color scheme with innocuous themes for the purpose of reaching broad audiences. Given that “revolution” is naturally a part of the game’s title, those who believe in unwavering respect for authority might grit their teeth. Nevertheless, members of the Resistance encompass the kind of archetypical characters one would find in their favorite children’s show. 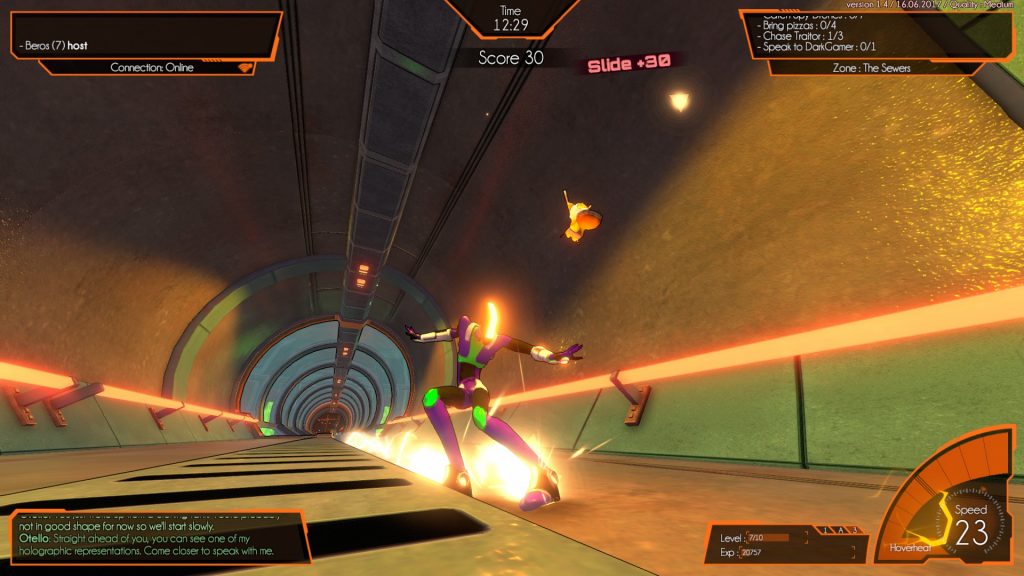 In Hover, there is both grinding and sliding.

The story in Hover remains unchanged from the Early Access: a municipal power rolls out a No Fun Allowed policy by confiscating all gaming consoles, raising the ire of the Gamers, who lead a resistance to overthrow their oppressor. In my preview, I considered the story disjunctured and aimless, but the reality is that it is simply meager, because Hover is modeled with MMO-like mechanics in mind, so the game was designed with gameplay superseding story. Players are given a “main quest” that, no matter what the the NPCs say in their text bubbles, can be distilled into “acquire enough experience points to move to the next area.”

Players gain experience, or “reputation,” by completing challenges that members of the Resistance offer with or against other Gamers (real people when online mode is turned on—Hover makes a big to-do about being able to jump in and drop online at a whim, but there is virtually no difference) and NPCs around the city. Among these are: traditional races against other NPCs or players; chases, requiring players to follow a miniature, airborne bot that players need to “tag” by jumping and touching a certain number of times; time trials requiring players to conquer a circuit while making few mistakes; Gameball, a sport that is basically cyberpunk handball; and deliveries, which apply the lessons learned during handball to level layouts for couriering. There are other miscellaneous objectives that are persistent and do not need to be activated, such as disabling anti-gamer holo-propaganda, spray painting graffiti on propaganda posters, reading information points, and  finding GameGirls—GameBoys for those who champion gender equality. 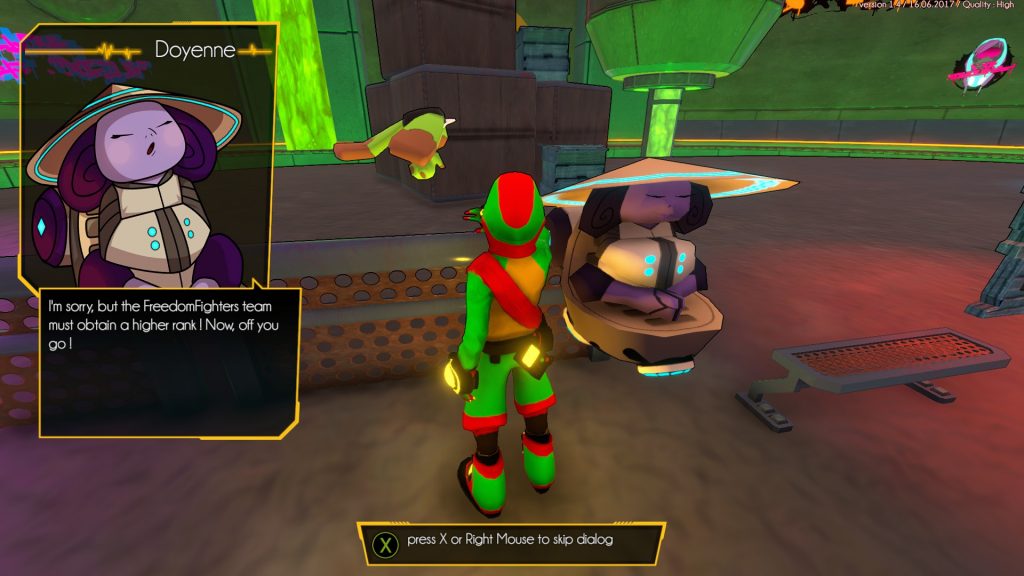 I would have been less offended if she had said “I’m sorry, but your princess is in another castle.” With progression walls, nobody wins.

The main challenges are always timed, and the faster they are completed, greater is the reward earned. Such rewards come in the form of upgrades for the player’s avatar. One can upgrade jumping height and “bounce,” speed and acceleration, grinding speed, knockback from running into other Gamers, and hacking. 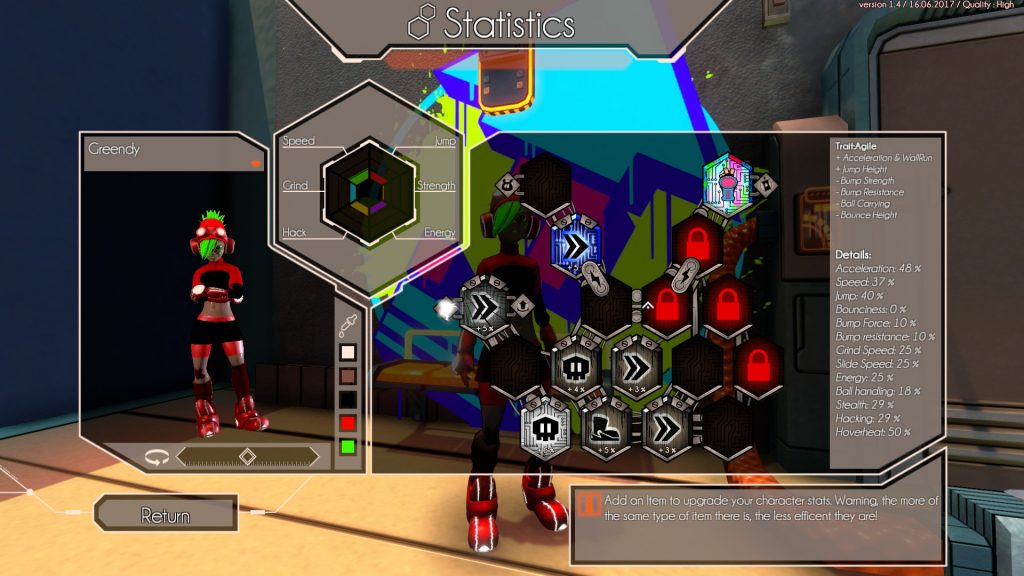 I was able to figure out some of this, but not how different skills link, or why the speed chip to the left is empowered. I also still do not know what charging energy does with the action button.

The features that will remind fans of JSR most are undeniably Hover‘s chosen aesthetics and music. This is because Hideki Naganuma, composer of JSR’s soundtrack, has joined forces with Cédric Menendez of Midgar Studio to create a symphonic blend that is sure to send players searching through their MP3 collections to perform some sampling of their own. The funky beats of “Enter the City” still remains my favorite track, and it is so good that I am not even mad that the first track is the game’s best as it is that good. “Heaven Up” is as hype as a celebratory elevation should be. “Wata’s Lounge” is as chill as the name of the track suggests. “Hi-Jump” provides a nice blend of electronica with a pulsating beats. 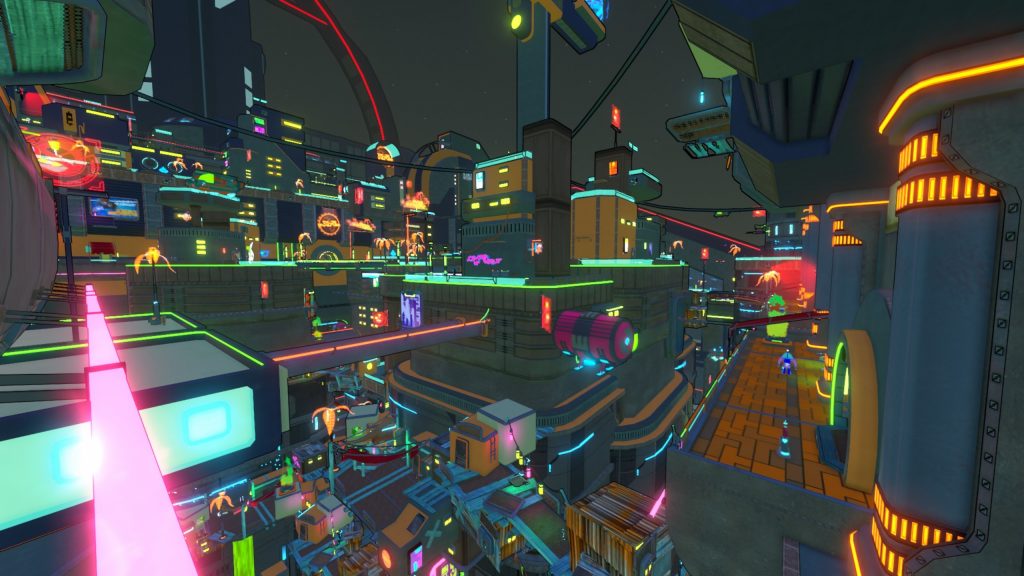 There is no denying that Hover City was the basis of the game during its early design phase.

As smooth as the music, Hover runs at a stable 60 fps, and I detected no hiccups or slowdowns. The colors, particularly those of Hover City, bloom vibrantly on the screen. One can tell that this section of the game received far more attention than any other, as it is even sectioned off with slums at its base and the class dissections are evident as one increases in elevation up to the lofty upper-tier locations. Here, the game looks great by any standard, but I wish this image was more consistent with some of the images below it.

Now that I have covered aspects of the game that I did not directly address in our preview, I can list all of the elements I observed that are different from the Early Access version of Hover: the sewer area is now polished, including more graphical detail and NPCs sprinkled around the area. Sadly that is all I noticed. 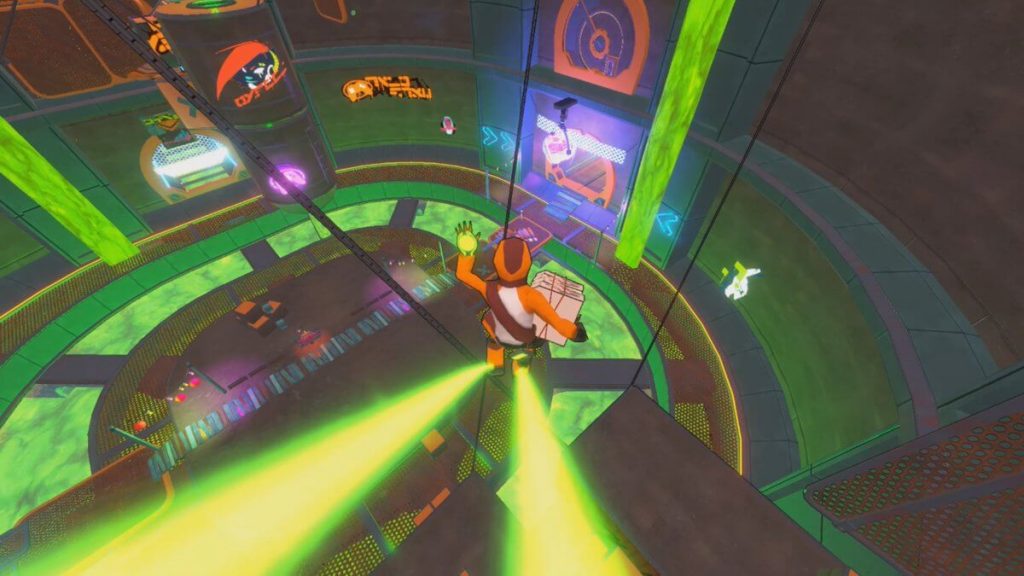 “Challenges” is a glorified term for “running errands,” such as the timed delivery of a parcel here.

This means that practically all of the problems that I mentioned in May persist. With Hover as my most recent frame of reference rather than JSR, I managed to forgive it for how characters float, because this mechanic facilitates its parkour elements, allowing for increased vertical scaling. However, the sewer time trials remain as difficult as they were in Early Access, and had I not already earned upgrade chips during my preview, I might have never cleared them for this review. The challenges still feel as though they are completely unrelated to the “purpose” of the game, giving the impression that they are “filler” for an online environment rather than missions of substance. Yet Hover lacks a player count of any kind, and even when Gamers were lacking, I still found no in-game enemies of any kind. In other words, Hover is a chore to play because it is boring an full of empty space.

The most egregious problem with Hover is the fact that it fancies itself an “open world” game. I discovered that understanding of this concept differs vastly from that of the developers. It was clever of them to start players with the largest area, Hover City, so that they might become attached to the game before they discover that it is the only part of the game that is actually “open world,” and the art direction atrophies severely, afterward. I have mentioned that the sewers are improved, but this setting is little more than a grandiose skating rink (the small area that is Resistance HQ is great, and I wish there was more to do there). Gamers will eventually have to visit a prison to liberate members of the Resistance, reducing a game that champions free-styling into dungeon crawl in a maze. Advertising Hover as an open world game when progression increasingly becomes constrained is deception. 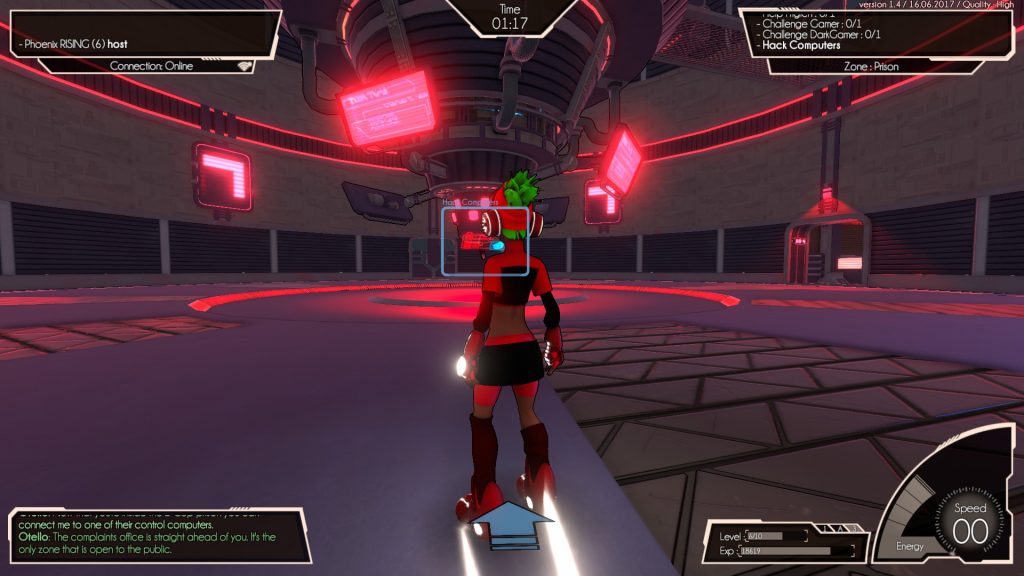 Neon grimdark is precisely Hover does NOT need.

The prison itself is an egregious violation of quality game design choices. Players will be required to exercise an unprecedented level of stealth and agility, while reducing their gait. In Hover City, being detected by an E-Cop camera is oftentimes meaningless, because one can simply outrun the police bot until it gives up the chase. In the prison, however, there is nowhere to run, and activating a floor or laser sensor results in the penalty of being required to start from the beginning of the area. This prison is an example of a critical failure in video game design choices, as it is completely counterintuitive to everything that Hover represents to such a degree, that even the music during this section is underwhelming. I pride myself in beating every game I play before writing a review, but this prison literally made me quit.

Still by the time I had decided to wash my hands of Hover, I had already seen all that I had to offer. In actuality, I felt this way back in May, as I noted that developer Fusty Game consists only of a team of three. The necessary tweaks to get Hover where it needs to be would exceed the capacity of such a small team. Additionally, Hover is designed under the assumption that players will be interacting and playing with other Gamers, but in my experience the most one could hope for is a few lines of chat if anyone bothers to say anything at all. It pains me to say that I was looking forward to some nostalgia with Hover, but all I encountered was discontentment. 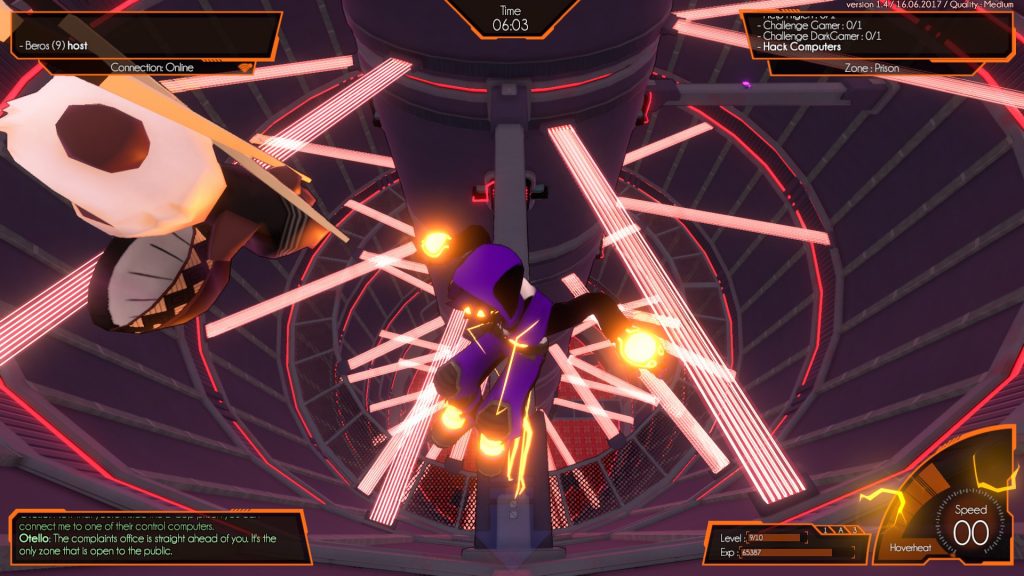 Hover: Revolt of Gamers is a humbling lesson in setting expectations versus what comes into fruition in reality. Disappointment is the end result.