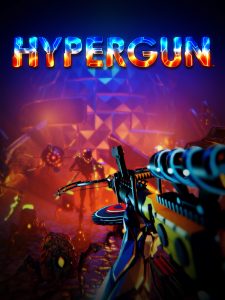 In this roguelike FPS, aliens have taken over the world. It is up to you to create the ultimate weapon to stop them. So grab your Starbucks, clock in, and hop into the simulation chamber! There is no time to lose!

Violence: The entire premise of the game involves killing aliens in a virtual environment. Ninety percent of it is shooting them with bullets or laser-based weapons. A few attachments, like the grenade launcher and buzz saw, kill them in other ways. There are splashes of alien blood, but it is not overly gory. Occasionally, you’ll throw office supplies at them.

Language/crude humor: The humor in the game is dark. Humanity is being wiped out by aliens, and your job is to go into work and create a weapon to kill them.

Roguelike games are usually defined by randomization. Maps, enemies and power-ups are random. For reviewing purposes, roguelikes are the hardest genre to evaluate. It takes a while to get a sense of what the game is, and in terms of completion, the randomness can be frustrating. 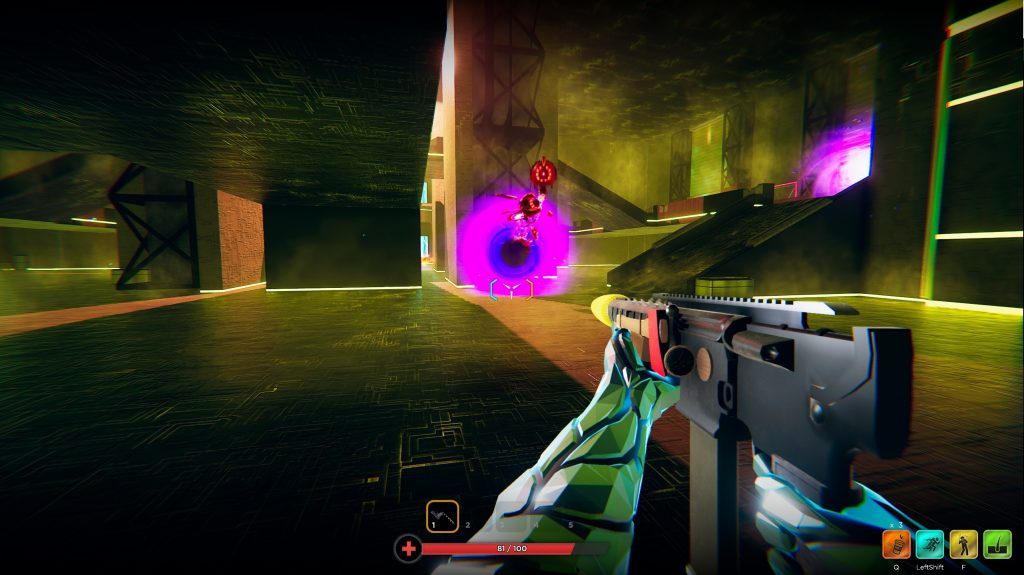 And the worst part is that you have to work on a Saturday!

That being said, HYPERGUN is a great roguelike. Unlike traditional games of the genre, which are usually side-scrollers, HYPERGUN is an FPS, which is a refreshing change of pace. Its gameplay is quick and tight, but not perfect, and the aesthetics are fun and fit well with the story. It keeps the tone light and ventures into dark humor, and the pieces add up together to create a challenging and fun

The year is 2038. Aliens have invaded the earth, and as of now, they are an unstoppable force. Your job? Go into the office and help your company create the ultimate weapon to defeat the alien horde: the eponymous HYPERGUN. You’ll run through a randomly generated simulation, killing aliens and progressing to different rooms through six unique environments. Along the way you’ll find different upgrades to your gun (there are over fifty) to create an unstoppable killing machine.

There is a lot of neon in this game, and in terms of graphics and music, it is worthy of neither praise or scorn. There was a weird graphical quirk during my playthrough: the sniper enemy would constantly glitch out after being killed, but it did not ruin the experience. In fact, since the game takes place in a simulation, graphic bugs have an in-game reason for existing.

Most of the story is given through the background in HYPERGUN. You enter the office building where the simulation chamber is, and most of the story notes are on Post-its and tablets scattered around the office space. The game has a refuge in audacity, and it is actually a pretty funny contrast between the post-apocalyptic plot given through everyday office talk. It is a lot like the game Portal. 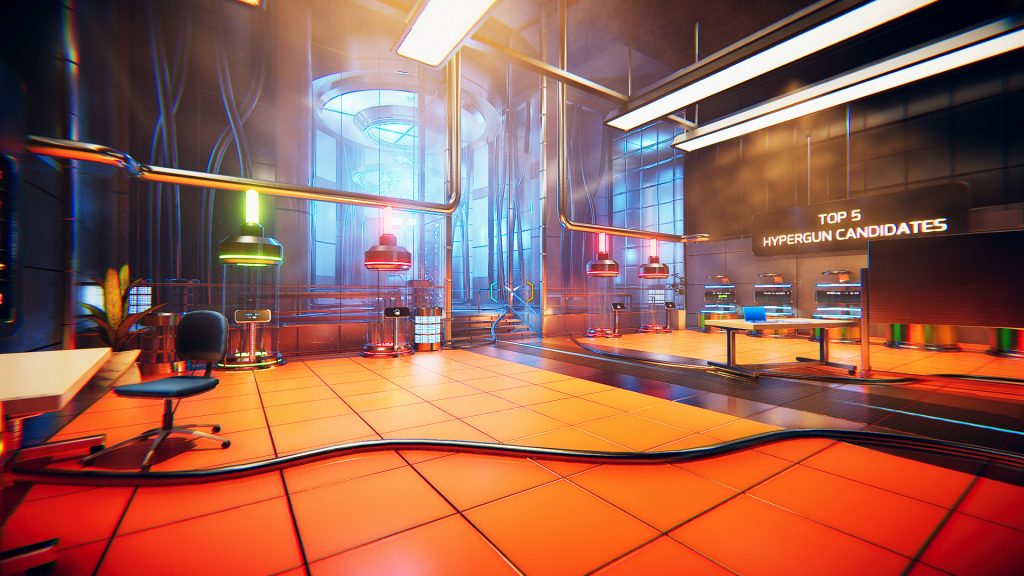 Remember, failing to save the earth from aliens means no quarterly bonus.

Speaking of test chambers, the majority of the game takes place in the simulation. Each level is procedurally generated, but does not get old after repeated playthroughs. Each game will give you different power-ups for your gun. Replayability is high and the combat works well. It is a very simple point-and-shoot (there is not even a zoom option) game that sticks to the basics. It is almost like the early Quake or Doom games.

Unfortunately, the game’s strength is also its weakness. Like many roguelikes, HYPERGUN is hard, and because of the nature of the game, it is not consistently hard. This is not a bad thing “per se,” as many gamers enjoy these kinds of games. But if you are looking for a consistent gaming experience, HYPERGUN is probably not the right choice.

There is a difference between hard games and punishing games. Hard games are tough to complete, but they provide enough incentive to carry on; every victory feels like it is worth something. Progress is clear and when you lose, it is obvious where you failed, making it obvious what you need to work on. Punishing games are usually hard partly because they don’t provide any of those features previously mentioned. HYPERGUN straddles the line between the two. 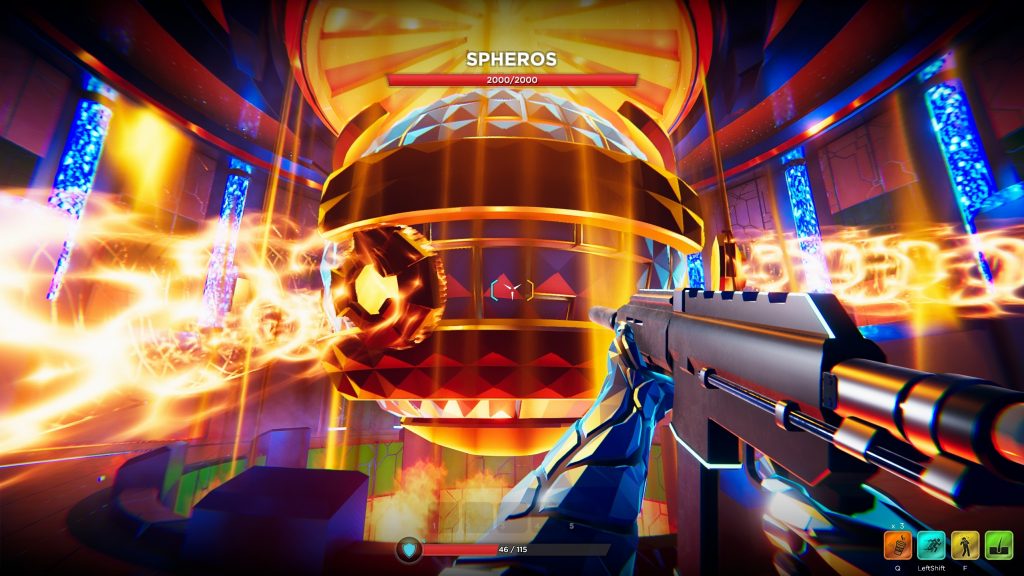 Not affiliated with the Galactic Empire.

The game is difficult, but it is usually pretty clear what you need to do to move forward. Most of the upgrades to your weapon usually come with a small advantage, like higher fire rate, and a disadvantage, like lower accuracy. These are fine, but there are some upgrades, such as a grenade launcher, that are obviously preferable. This means that some levels will be easier than others, really by no choice of your own. Randomness is a staple of the genre, but since the premise of the game is about creating the ultimate weapon, some control over your choice of upgrades would be nice.

That being said, the game does offer different classes with different guns and abilities. There is the intern, wielding a SMG, the security guard who uses a rifle, the lawyer with a shotgun, and the HR rep who uses a sniper rifle. They’re each suited for different playstyles, but you need to spend time grinding to unlock anyone other than the intern. HYPERGUN is a roguelike, meaning that if you die, it is game over. There are no checkpoints and no save states. And if you die, your gun loses all of its upgrades. Nothing feels more punishing in a game than losing seven or eight different upgrades that took forever to acquire.

Perhaps a better way to describe HYPERGUN rather than “punishing” is “unforgiving”. HYPERGUN is gruelingly tough, but fair. Most of the failures in the game come from mistakes made on the part of the player. Enemies are pretty easy to read, and the guns’ accuracy feels genuine. Map layout is clear enough to avoid causing too much encumbrance, but varied enough to offer different strategic possibilities. Because a “game over” results in losing all your progress, the game itself is fair, which works to make HYPERGUN exceptionally fun. 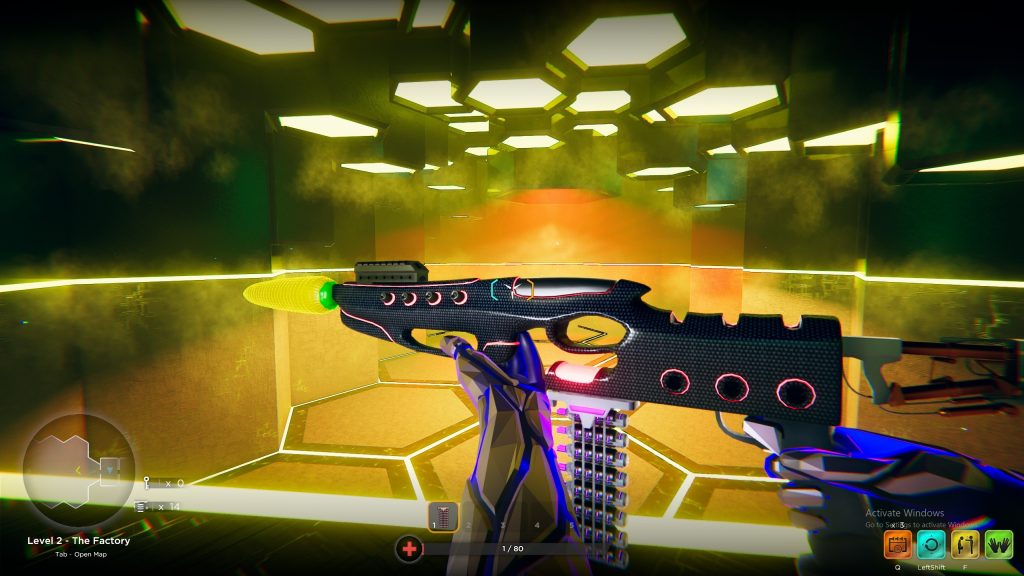 HYPERGUN is a fun game with a silly sense of humor. It is a title that knows its premise is ridiculous, and instead of forcing you to accept it, plays around with it. As a result, the game seems more real, deserving of more investment. If you like roguelikes or FPS games, give HYPERGUN a shot.

If you want a challenge to test your mettle, HYPERGUN is right for you. It combines the randomness of a roguelike with the finesse of an FPS and provides a unique gaming experience. Every level is different, and each one is action-packed and fun.