Review: I Fell from Grace (PC)

An adventure game for the mature; keep it away from children so that they remain pure 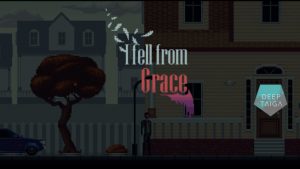 Despite how official it may appear to have a fancy studio name like “Deep Taiga,” it actually consists of only one man, Patrik Langstrom. The gentleman did, however, recruit, among others, the freelance talent of Gerado Quiroz for visuals, and Kirk Markarian for music. The project in question, I Fell from Grace is an ambitious one, reminding me of days ten years ago when indie developers were not as strong of an industry presence, and one would expect some levels of jank in their productions. 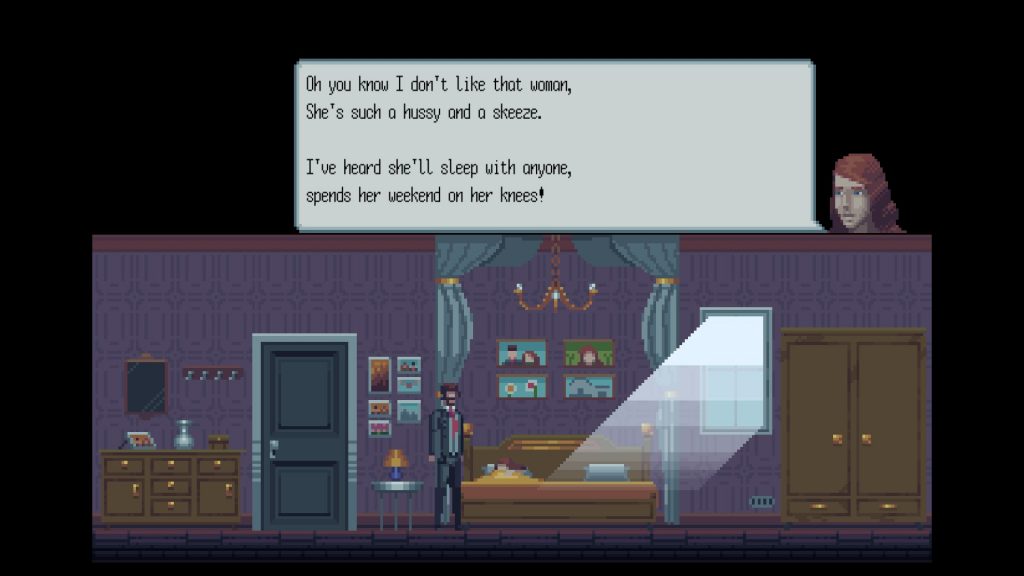 Grace not exactly living up to her name when it comes to describing her neighbor.

It would be easy to say that despite its pixel art, I Fell from Grace should be approached with the same sort of trepidation that one would approach the content found in GTA. It is possible to become a drug pusher, work with local gangs, commit adultery, lie, steal, and kill; suicide, overdosing, murder, and cannibalism are feasible. Supernatural elements events such as an angel/devil encounter and dreams of ghost children are present. A man who resembles Anton LaVey curates an oculist shop that is all fair game. 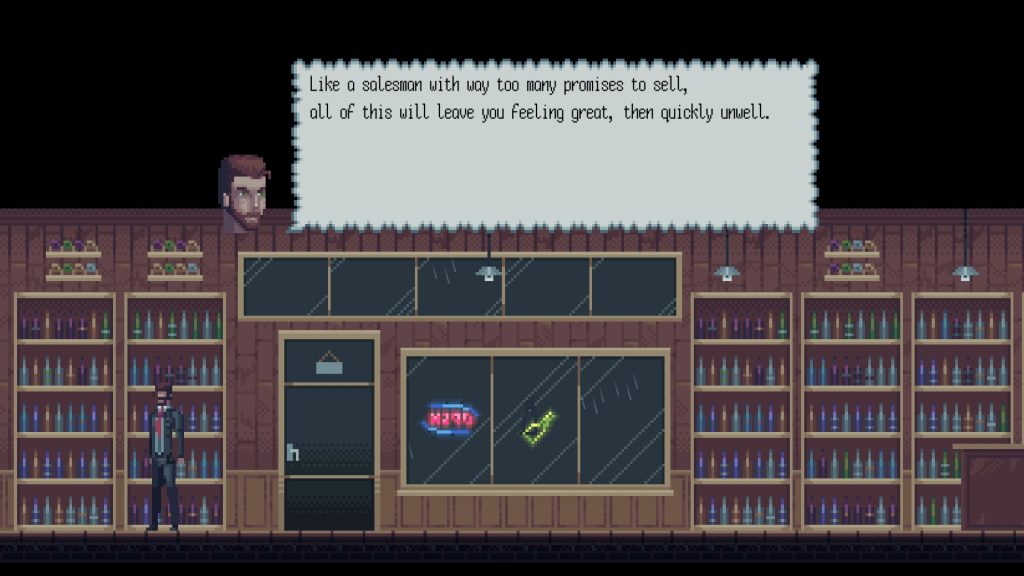 A rather forced rhyme, but truth nevertheless.

Yet, while it is conceivable to witness if not also participate in this phenomena, my experience with I Fell from Grace suggests that it is imperative to avoid and prevent some of the nastiness in the previous paragraph from taking place. In this way, the game’s title is self-referential in its exposition, and urges players to atone and get back into good…graces. Even so, the challenge lies in the fact that negative choice has the tendency to snowball expeditiously into tragedy. 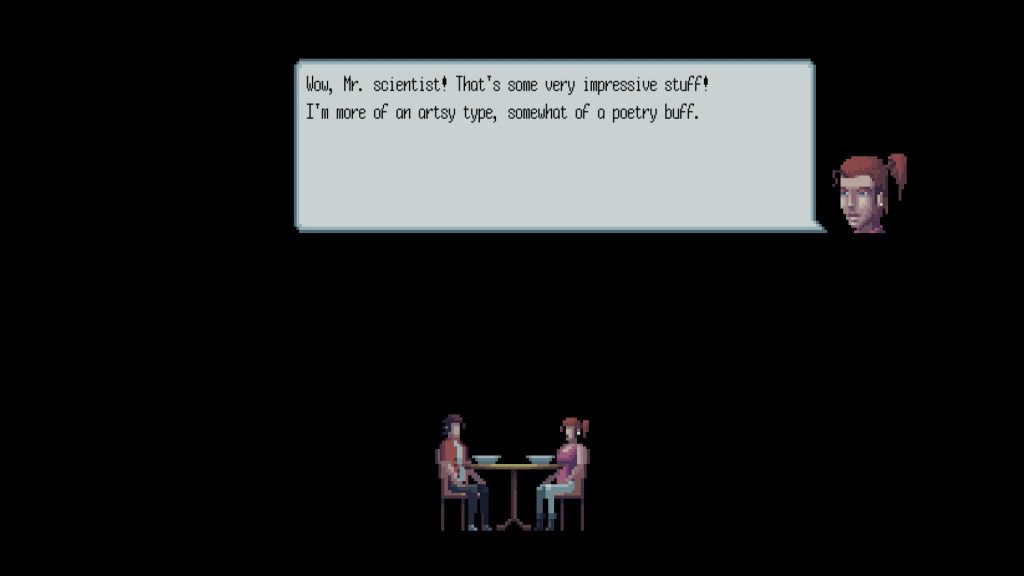 One of the key features of I Fell from Grace is that it is written entirely in rhyme. ABCB is is the standard rhyme scheme, also known as a ballad. Other times, such as here, couplets are a hallmark.

I am unashamed in my pining for hand-drawn assets in games, offering high praise for games like Sundered. Conversely, pixel art such as that found in I Fell from Grace typically strikes me with ambivalence if not disdain. Nevertheless, in this instance, I was won over through the effective functionality of this artistic choice. Never before has a macabre arrangement of low-resolution pixels shocked me in the way that I have been with this game, and it managed to accomplish this feat this several times, usually by a violent scene accompanied by an audible cue that sounds like a distorted signal. This serves to clue in the player (me) that something bad has happened. After bearing witness to a couple gradually giving in to drug addiction (the attentive player can prevent this), and the end result of a quixotically friendly couple who decide to move into an unsavory apartment complex, I have been converted. I am a now a believer: the pixel art in I Fell from Grace is a legitimate, effective stylistic choice, and not merely a budgetary imperative. 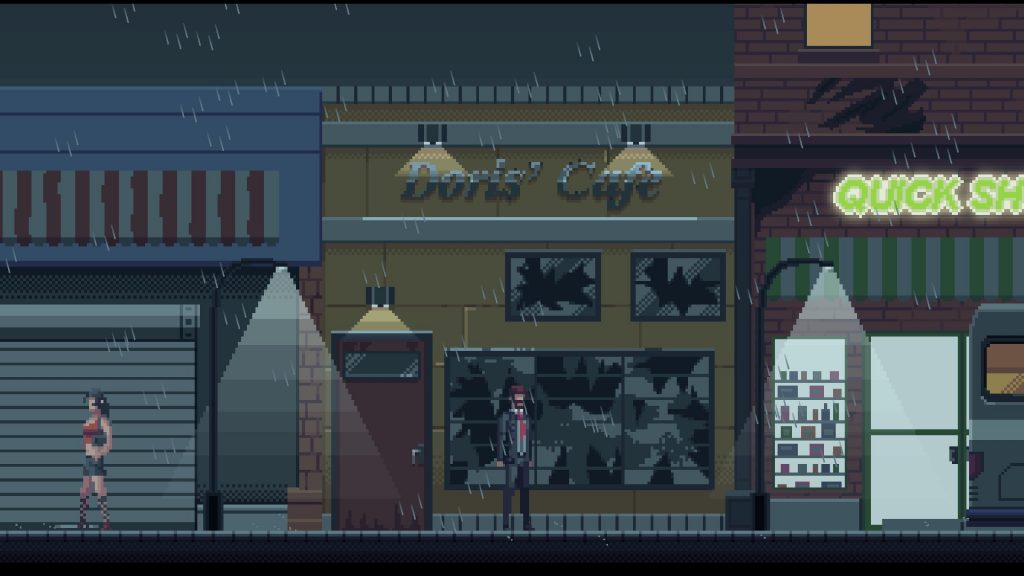 Pixel art or no, the game excels at portraying he decay of society, the dilapidation of life.

The sound design is incongruent, albeit positively, with the game’s otherwise retro aesthetic. The clamor of footsteps resembling some goofy sound effect from an 80’s era arcade classic, some whistling, and the finale of the elevator music that plays at protagonist Henry’s workplace are outliers that do indeed remind me of budget concerns. Notwithstanding, a victim’s death gurgle after imbibing a poisoned beverage had me shrieking internally as much as hearing (and seeing) a gunshot wound to the face. Even though I knew that Heny’s pregnant wife Grace was going to suffer an accident, her ensuring scream still startled me, as did her screaming after a nightmare. Likewise, various songs playing in the all the downtown locations are nigh RPG-grade, effectively setting the game’s tone of morose melancholy. 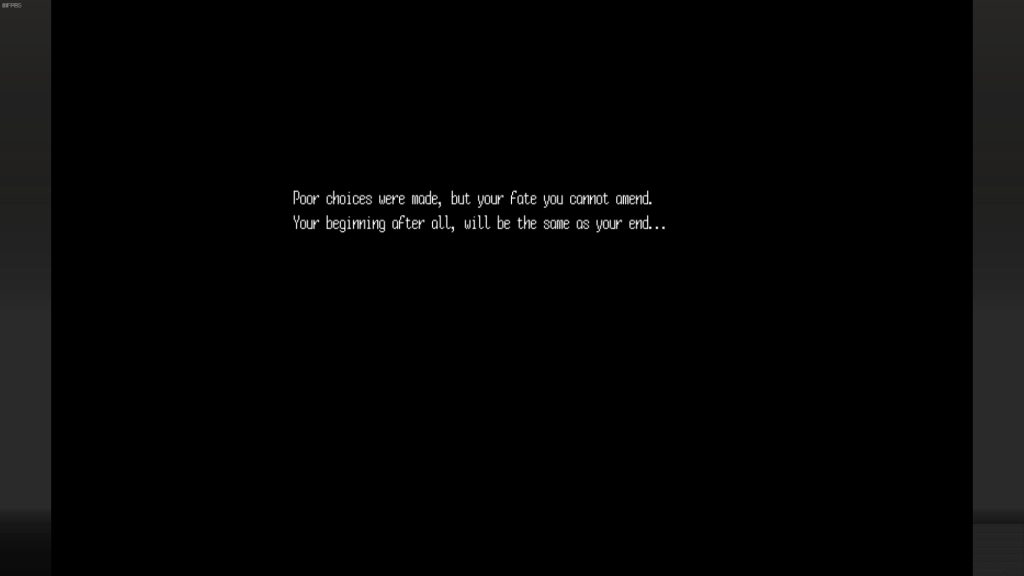 I Fell from Grace begins with Henry waking up late for his dead-end job, leaving his languid, bedridden, terminally-ill wife, Grace, behind. Upon his return after an otherwise mundane day, a mysterious woman approaches Henry, and gives him an envelope that features indecipherable text, along with six pills. That night, Henry suffers from a dreadful dream that gives him several warnings and hints as to how he should proceed going further. Disturbed, Henry returns to work, and gives one of the mystery pills to a homeless, indolent NPC named Stinky Pete—after all, the man claims that he typically ingests all sorts of rubbish, so he volunteers as a specimen of sorts. Henry proceeds to work, where key heinous events lead him to make a few atrocious discoveries. Upon his departure, Henry finds out that Stinky Pete has disappeared, having been seen running after being introduced as an invalid. Could the mystery pills be responsible for his restoration? From this point, if players feel that they have had yet to make game-altering choices, they will be making some soon, such as whether or not to give Grace a pill. 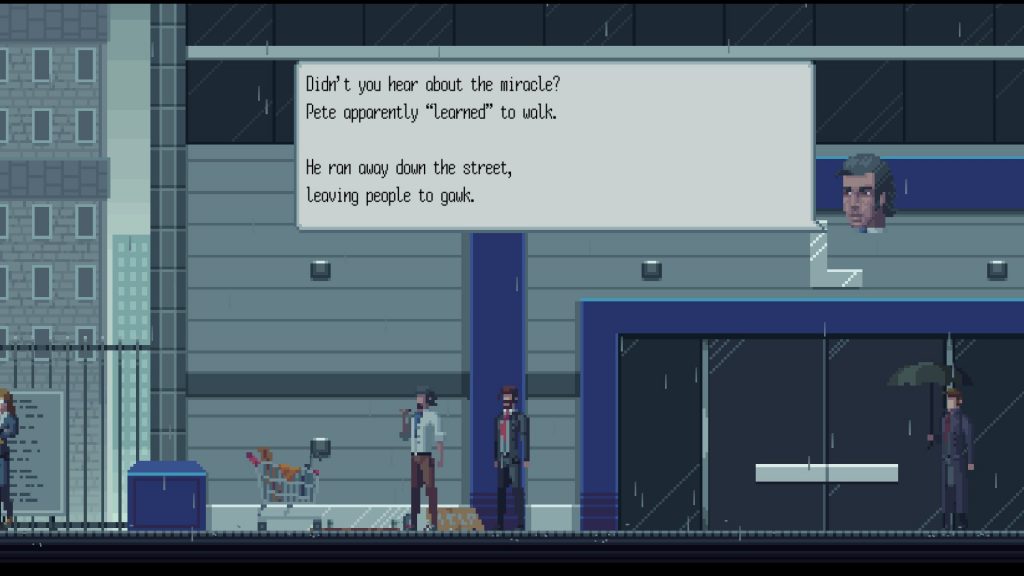 Choices such as these are what drive the plot in I Fell from Grace, a game where the developer claims that it is possible to achieve twenty different endings, with single decisions outlining potential trajectories like a capillary. In between the game’s touchstones, it otherwise eschews the luxuries of modern gaming such as a quest log, a mini-map, a glossary, or hint system, faithfully recreating a traditional adventure experience not unlike the original Monkey Island. This includes positives such as interacting with NPCs who change their dialogue daily, collecting items, and solving puzzles. Yet modern adventure (and puzzle) games include the kind of quality-of-life features that I have listed to mitigate gameplay problems that are unique to the genre; I Fell from Grace also hosts a few issues of its own creation. 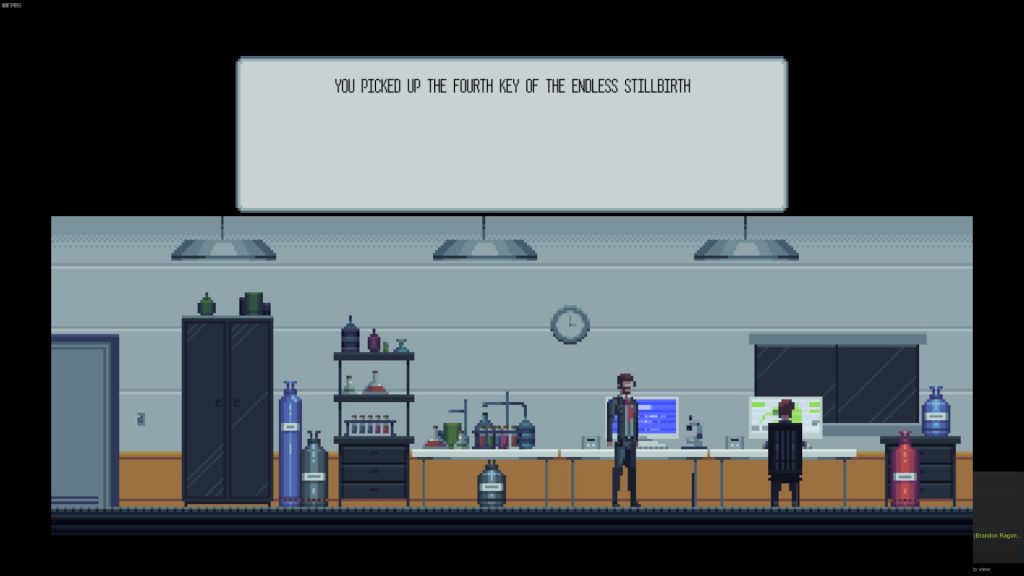 I was sent on a mission to retrieve a red canister from my employer. For literal hours, I tried to get this one, but it was the WRONG ONE! And I would have never known this without the developer’s help, because the solution to the puzzle does not become “active” until the quest itself begins. Confusing? Yes, it is.

For example, players will naturally walk (or run) left and right on the screen, interacting with NPCs, pressing the use button when it appears that something can be investigated. Yet, I ended up resorting to running around, frantically spamming the “use” button during the first five minutes of the game, recognizing that I need to get my house keys (first of all, who on earth is unable to unlock their door from the inside???) from the bookshelf as prompted by the shining icon in the living room, but being unable to find a stool to climb up to reach them. Thanks to YouTube, I learned that the solution is tucked upstairs in the far-right corner of the office, somewhat blending in with the rest of the scenery. Some puzzles are plainly clear, such as needing something to lower the ladder in the garage, and there is no other sensible reason to use the item behind the police station downtown besides that purpose. But many more puzzles had me stumped. Now I appreciate a good puzzle, but there are several that had me scouring the internet looking for solutions. Unfortunately, I Fell from Grace appears to be an indie game drowning in the abyss that is Steam, and there are not that many players on the forums and elsewhere figuring everything out,  and writing FAQs. So while in the past, players might form communities to brainstorm through the puzzles of adventure games, or a print publication such as Tips & Tricks would reveal the answers (such as the infamous “reset” prompt in X-Men for the Sega Genesis), those aspects are all but absent here. The developer has been gracious in helping me along, but they should not have to do so. 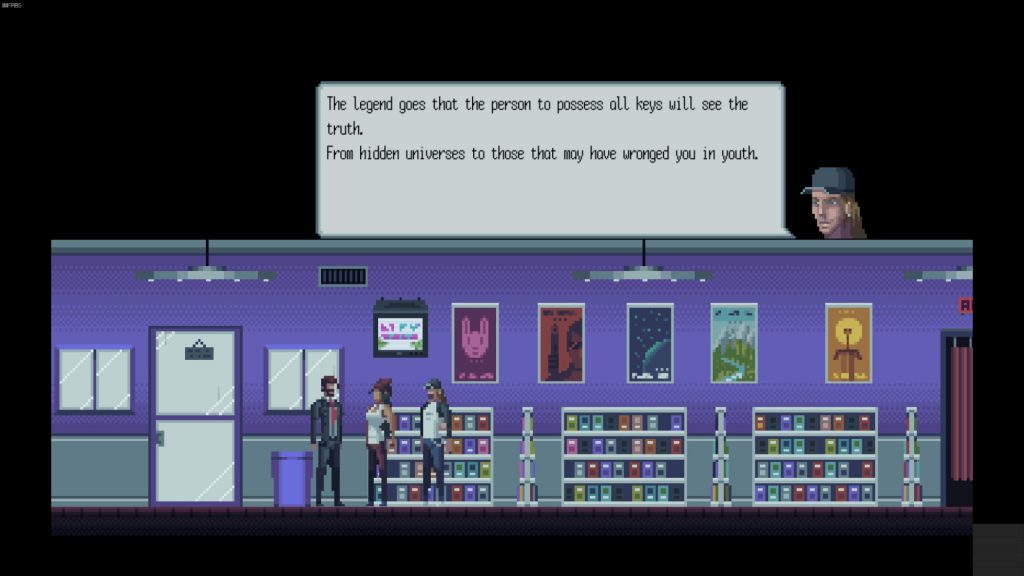 By the time he says this, I had already solved the puzzle…I think.

I Fell from Grace is seemingly designed to be played in a single sitting, because it does not remind players where they have left off should real life interfere with a playthrough and cause players to put it down for a spell. Moreover, it is possible to miss or forget a clue, being unable to speak to a person more than once, also leading to an enigma. Furthermore, the game includes only one save file that automatically overwrites often as players make decisions. With up to twenty possible endings, I Fell from Grace becomes a massive time-sink should one wish to fully explore the fallen world that Henry finds himself. Even after three playthroughs, I still have yet to stumble upon the usage of several common items found in highly conspicuous locations. Throw a brotha’ a bone, Deep Taiga!

To achieve these multiple endings, I Fell from Grace breaks its own sequences. For example, when given a choice to give Grace a pill, no matter what, players will be required to take a blood sample from her. Well, in one path, the syringe is always located in the bathroom at home. In the other path, one has to find a syringe. In subsequent playthroughs, the syringe is always in the bathroom up until that decision is made, and it is only when the blood sample is required does it disappear. Much of the plot infrastructure in I Fell from Grace is built upon this kind of plot pathing that inexplicably changes encounters based upon few key player actions. It is…disorienting, and without a guide, navigating all of this is daunting. 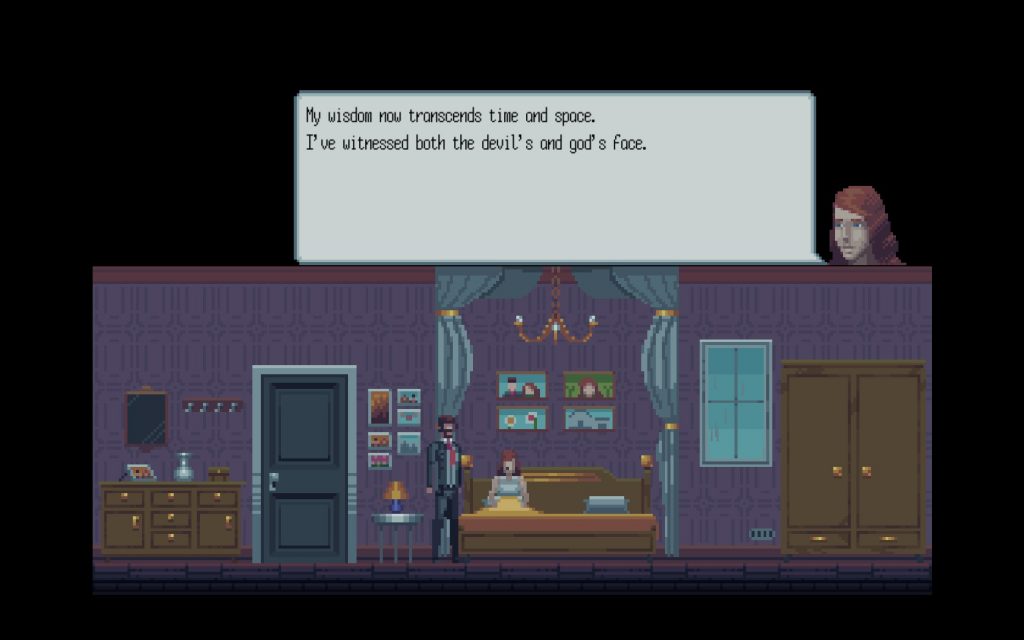 The things people say when the good doctor ups the dosage of their medication x10.

Indeed, those are two paragraphs worth of caveats. Even so, I still find myself wanting to jump back into the game to trigger a different path to learn more about the situations that Henry finds himself. After all, I have yet to find a resolution for the heinous scene that I witnessed at his employer, and characters have been dropping hints to me concerning the company security guard and his illicit dealings. Maybe I can get the game’s detectives on his tail instead of mine. Those willing to overlook the game’s flaws or invest in some research, I Fell from Grace is an enjoyable, mature foray into the adventure genre.

I Fell from Grace forgoes modern gaming amenities at the risk of alienating contemporary gamers in order to faithfully adhere to the classic adventure genre, resulting in a harrowing, mature enterprise that will require perseverance to experience in full.