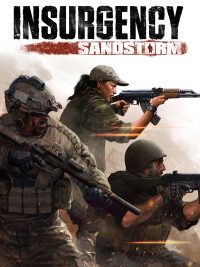 To echo the introduction of our review for the original Insurgency, it’s sequel Insurgency: Sandstorm still seeks to stand out with realism and immersion in a time when the genre is filled with futuristic tech and superpowers. Games like Overwatch feature high-powered super abilities that let players wipe out a team in one swoop—you won’t find any of that here. The existence of games like Rainbow Six: Seige proves that there is a market out there for a more grounded experience, but does Sandstorm scratch that same itch?

Violence: Insurgency: Sandstorm involves two teams facing off against each other in armed combat. Players have a variety of guns available to them ranging from sidearms, assault rifles, shotguns, bazookas, and more. Heavy artillery and bombing raids and can also be called in the take out opponents, and using a vehicle mounted with a machine gun is also an option. There is a significant amount of blood splatter when players are shot.

Language/Crude Humor: Whether in cooperative or competitive modes, characters will communicate and shout at each other. This dialogue often contains words like f**k, s**t, and d**n. An option is available in the settings to turn down the character voices if players wish to do so. It is also important to know that the developers are not responsible for interaction between other players while enjoying the game, and there is a very good chance that others will act negatively or use swear words throughout a gameplay session. 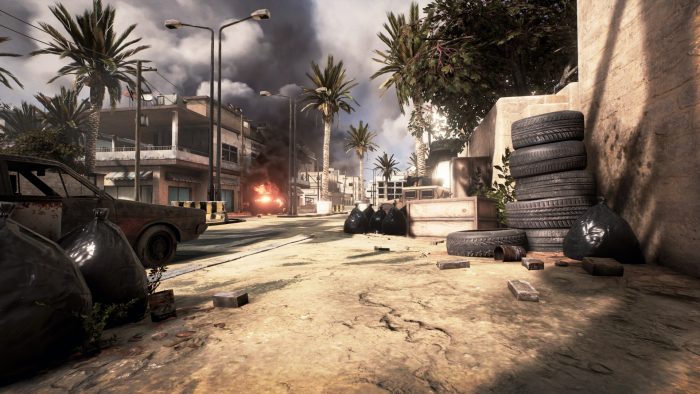 Insurgency: Sandstorm is a competitive first-person shooter involving two teams labeled as Security and Insurgents. If you’re familiar with Counter-Strike in any way, it’s not much different; these two teams are much like the Terrorists and Counter-Terrorists of that franchise. Rather than diffusing bombs or rescuing hostages, the teams capture and defend points while destroying weapon caches. The title of “Sandstorm” gives away the setting in that the maps are located in the Middle Eastern part of the globe. So far it sounds like twenty other video games we have played in the past, but there is much more than meets the eye.

On a surface level, Insurgency: Sandstorm sorely lacks variety. The three game-modes all involve capturing points, but the difference is in how often teams can respawn and whether your team will need to destroy a weapon cache to seal a victory. I can’t give an exact number of how many maps there are, because many of them aren’t too unique or different from one another. Sometimes the difference is one map looking like an industrial area while another may focus on a more residential theme. These areas may be lacking, but that will hopefully be remedied with the free content drops coming in the future. You read that right, no paid downloadable content. 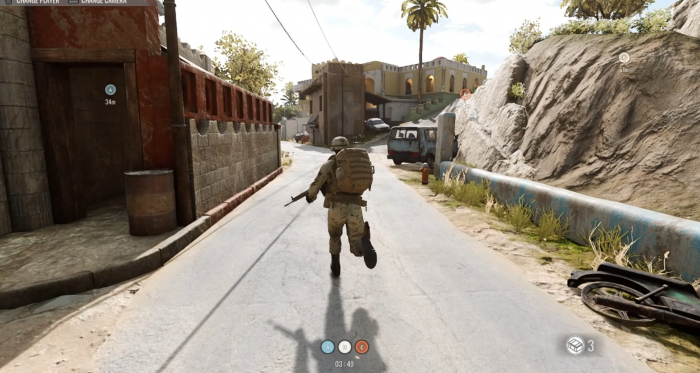 Variety in match types and maps are usually important in giving an online competitive game some longevity, but I’m willing to make an exception in this case. The reason is that Insurgency: Sandstorm is one of the most immersive shooters I have ever played. Each match has sixteen players to a team and utilizes a minimal HUD so that players have a clear view of the action. The best part is that it doesn’t take a full clip to take out an enemy; all it takes is a few well-placed shots. It feels fair due to the fact that I know my opponent shot first rather than asking myself what happened in a given situation.

One of my favorite moments is when I experimented with the Marksman class. I took my position at a distance to intercept the enemy team as they pushed forward. I spotted an enemy player through my scope and leaned to get a better look at him. He took cover due to suppressive fire and all I could see was the top of his head. I took the shot with a short stone wall in my way and got the kill. The only options for me to confirm the kill were to check the scoreboard or move in on his position. Sure enough, my opponent was nowhere in sight and the kill was added to my score. The Marksman is one of many specialized classes that players select alongside Breacher, Demolitions, Commander, and more that all have their own unique weapons and playstyles. 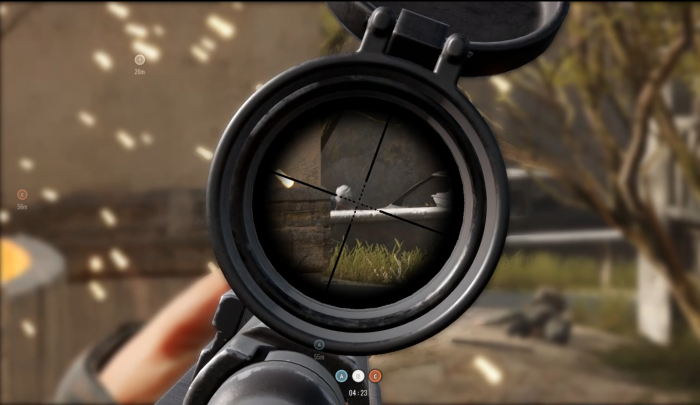 Those lean mechanics and bullet travel are fairly common in shooters these days, but this is one occasion where they truly matter. There is also no radar or special perk that lets you see the opposing team members; you must rely on your own vision and callouts from your team. This is a game where you won’t find many players scoring 20+ kills because each firefight feels slow and methodical due to its close-quarter nature. It doesn’t matter where you sit on the scoreboard; every kill feels like a reward since surviving an encounter is more of a privilege than a sign of dominance.

For players that don’t feel ready to face off in player vs player combat, Cooperative mode returns from the first Insurgency. Up to eight players can team up and take on waves of enemies. Sadly, it is not story-driven and boils down to the same formula of capturing and defending control points. On the bright side, it is easier to get kills for anyone who feels too gun shy to take on fellow players. When experiencing the co-op mode I discovered that I could be bolder in my movements and slightly less cautious. However, if I was not paying attention and not checking corners it was still easy for me to get taken down. It is a fun change of pace from playing those competitive matches, but I can see how playing cooperative might let someone develop bad habits when returning to face off against other humans.

As for the loadout system, it is most akin to the Counter-Strike series. Instead of creating a class as you would in a Call of Duty game, tokens are earned during gameplay and used to unlock your favorite weapons, attachments, explosives, and armor. Some weapons and gear are specific to the available character classes but the best part is that your purchases carry over into future matches, meaning that you won’t have to repurchase your favorite items for every single match. Those in-game token are also used to resupply any explosives you decide to take with you before respawn. 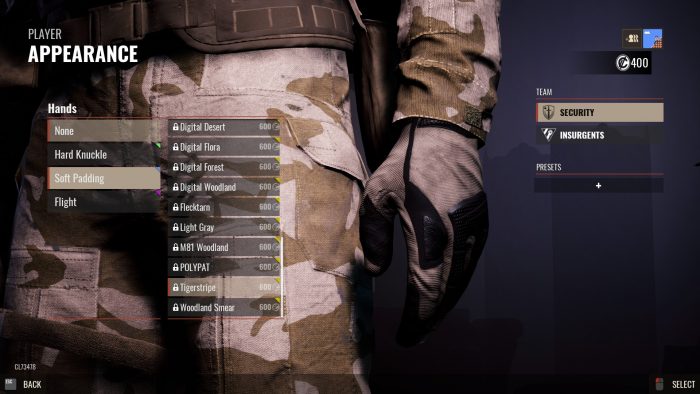 Outside of the matches your player rank profile will progress and unlock new cosmetic items for purchase. Insurgency: Sandstorm is light on physical appearance customization but has a sizeable amount of clothing, headwear, and eyewear for players to stand out among the rest of the crowd. These items are purchased with a currency that is separate from the previously mentioned in-game tokens. At the time of this review, there are no microtransactions to speak of; I can’t see the developers adding any in the future since the cosmetics are what players are encouraged to work for.

I spent enough time with this game that it has become difficult to return to other shooters for the time being. To discover where Sandstorm fits into the genre, I played a few moments of other first-person shooters such as Black ops 4 and could not get back into that fast-paced mindset. I can’t think of any recent shooter that has had such a long-lasting effect on me. I may not be very good at it, but it seems I have tapped into how Insurgency: Sandstorm is meant to be played. Even though they are few, those experiences of holding a line of defense and capturing a point only to barely make it out alive have stuck with me since my first gameplay session. 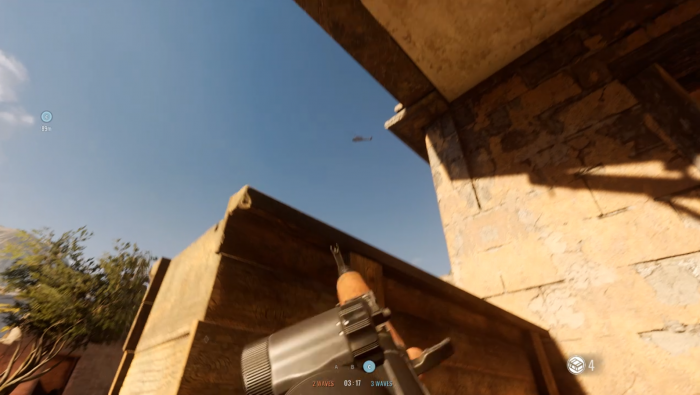 The sound design adds to that immersion. Instead of a narrator calling out the action, those call outs are done by the player controlled characters that inhabit the battlefield. Amongst that yelling and screaming are the realistic sounds of the weapons themselves. Sounds of bombs dropping and gunfire would engulf my headphones as I hid inside a building while on the receiving end of an attack from enemy air support. Music would only occasionally be played, and was effective in setting the tone of a battle.

For those reasons, I forgive the areas in which Insurgency: Sandstorm is lacking. It can easily be compared to Counter-Strike and Rainbow Six: Siege, but those games can be tough for new players to get into considering how long they have been around. Sandstorm is a game that isn’t bogged down by systems and doesn’t demand much from its player base. With the minimalistic presentation, great sound design, and realistic gameplay, this is one of my favorite first-person shooters in recent memory. PC players can check it out on Steam for the solid price of $29.99 and Xbox One/PS4 owners can expect to play it in 2019.