If Duke Nukem Had a Daughter

The last time I wrote about this game, it was called Ion Maiden. I understood this title as a cheeky heteronym for an iron maiden, the torture device that is mostly rooted in myth; I imagine that the developers at Voidpoint wanted to channel the macabre capabilities of its heroine. Unfortunately, the Iron Maiden took offense to a video game of the same name, and sued the poor indie developer’s publisher, 3D Realms, for violating copyright.

Not able to afford getting into a fight with a dog that big, Voidpoint changed the name of its game to Ion Fury, a risky venture because marketing is notoriously difficult for indie developers given budget constraints. After all, we sent our team to Pax South in 2019 where met the developers and saw all of the merchandise labeled “Ion Maiden.” None of that stuff is cheap, nor is this video game which frightfully aims to recreate the feel of Shadow Warrior, Blood, and of course, Duke Nukem 3D. I am pleased to report that it succeeds. 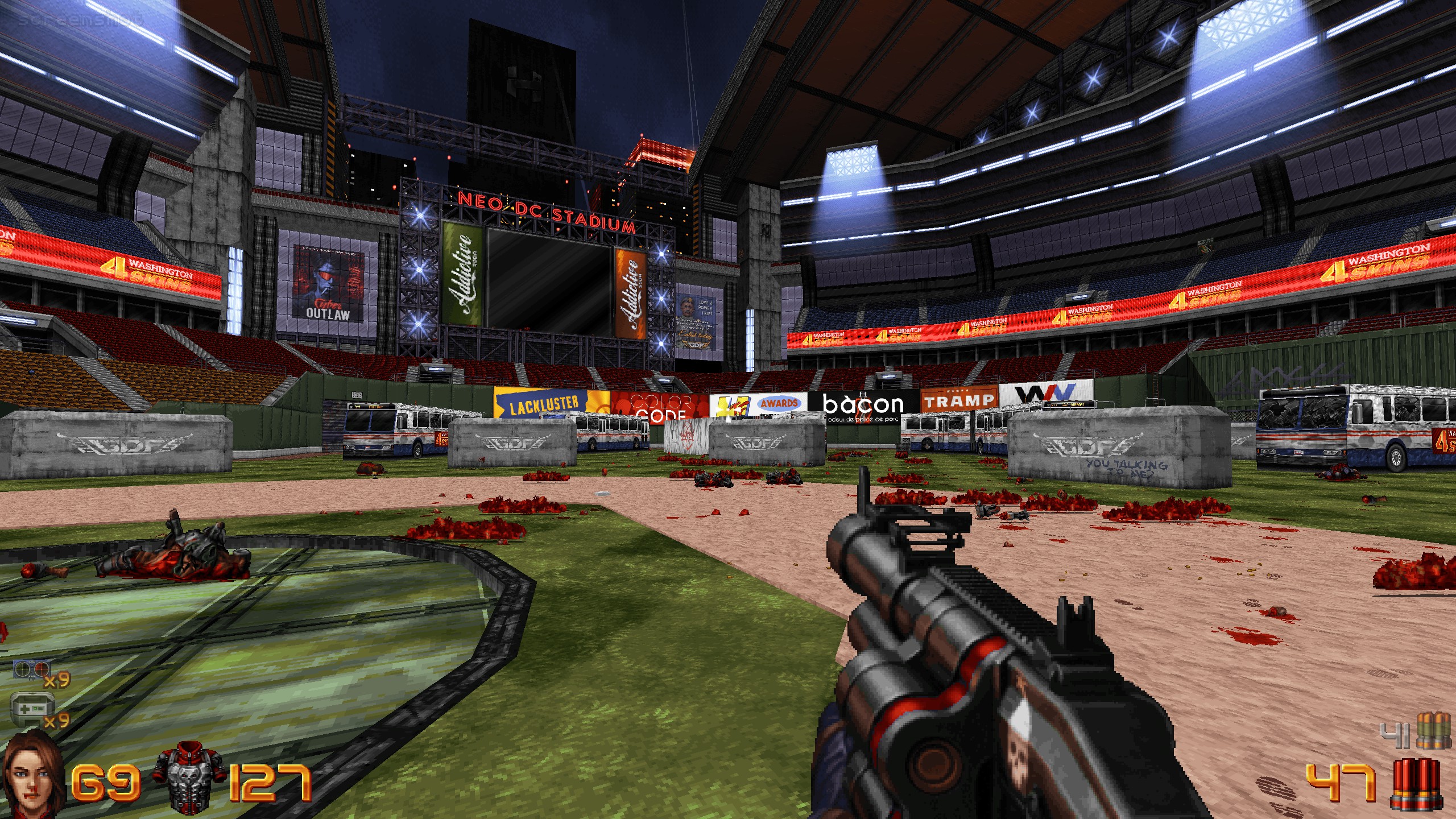 Violence: The names of the video games in the previous paragraph should serve as a warning to those who are squeamish in the presence of violence. The Sanguine stuff is everywhere, and I thoroughly enjoy blowing enemies into chunks of gibs from point-blank shotgun blasts or bombs. Even so, Ion Fury is not even as violent as Mother Russia Bleeds, or as gory to the point of silliness as in MK11. In short, expect 90’s level of violence, though.

Language and Crude Humor: I do not recall hearing any f-bombs, but the main character does say s**t, a**, and d**n, especially while talking trash to her enemies. In addition to her trash talk, Ion Fury includes Easter eggs and ads that would certainly qualify as crude. Behold some examples: 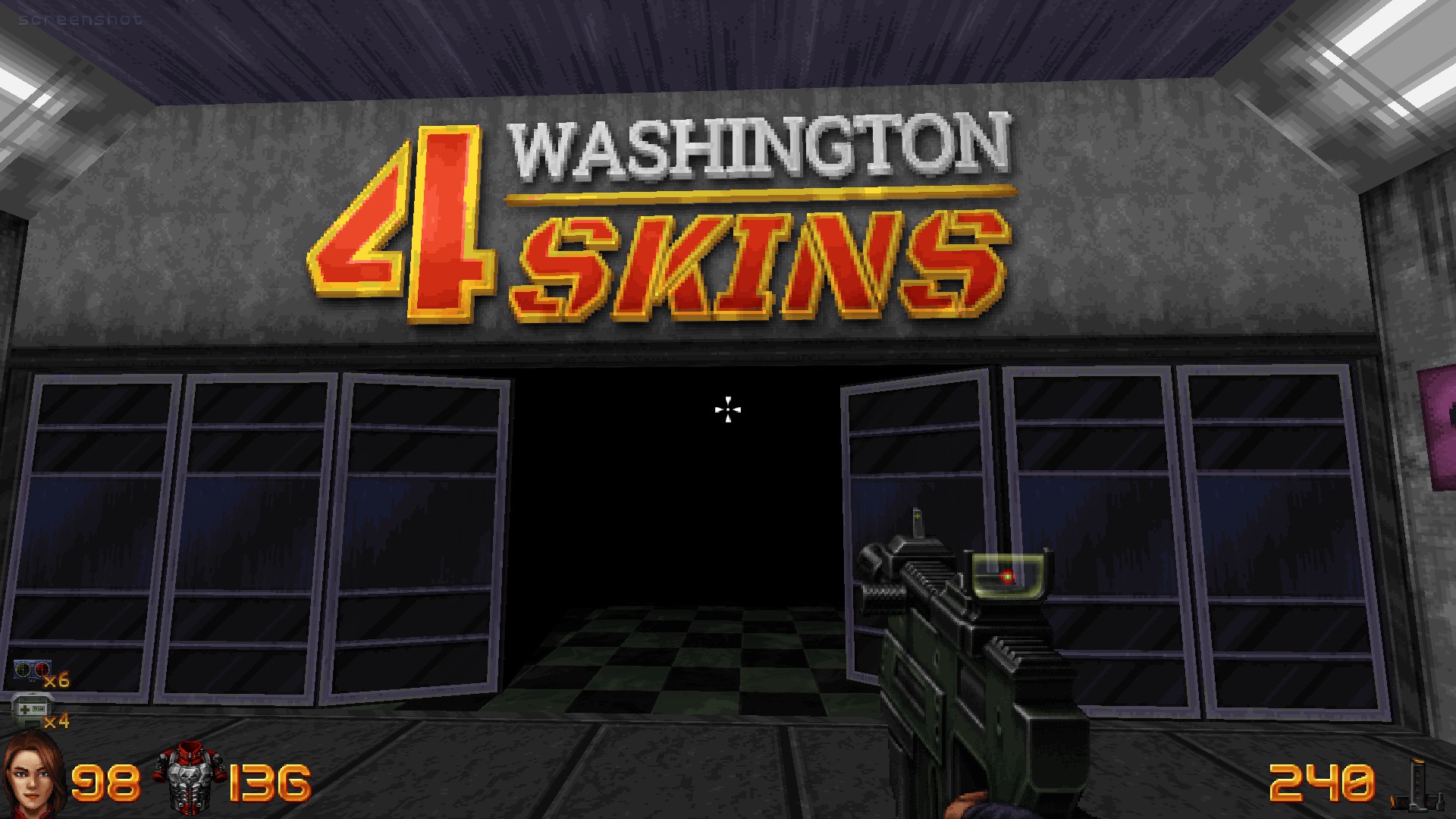 Or as my wife would say before they became the Washington Football Team, the “Washington Inappropriates.” 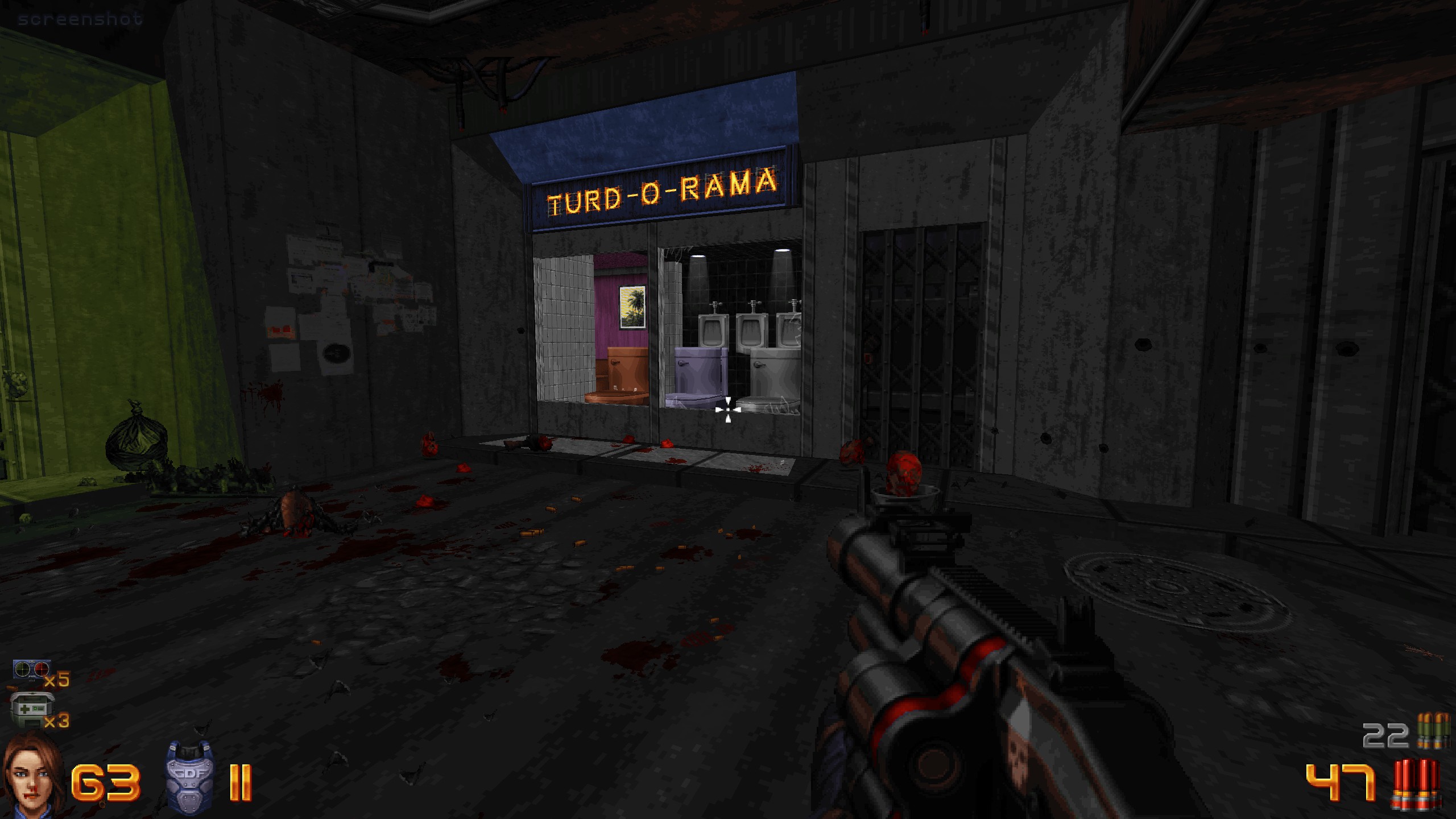 Toilet humor. Get it? I made a funny!

I also think “Clusterpuck” is a hilarious name for a weapon, especially considering how it behaves.

Alcohol and Drug Use: The main character is in a bar enjoying a strong beverage when her nemesis bombs the place, spurring her into action. 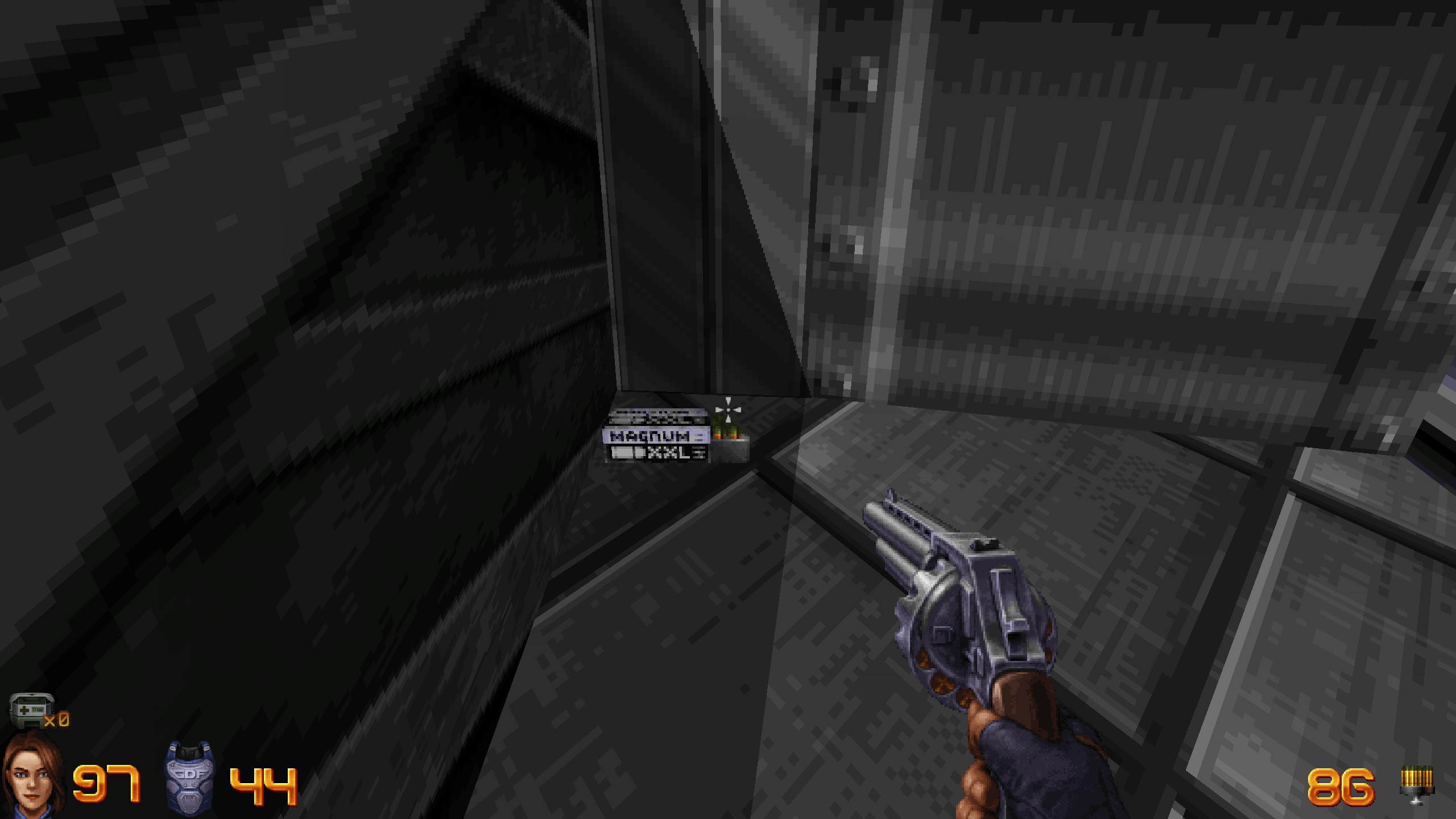 VoidPoint and 3D Realms trying to get sued by Trojan, too?

Sexuality: Perhaps more appropriate under “crude humor,” Ion Fury‘s reference to sex comes by way of pun or innuendo. For example, at the very beginning of the game the sign above the bar reads “Cocktails,” but only the first four letters are lit. In bathrooms, one may encounter soap called “Ogay,” a pun for Olay products.

ANTI-Sexism!?!?: Ion Fury is video game with a female heroine who is not circumscribed by her sex.  In fact, the protagonist’s name, “Bombshell,” is a subversion of its conventional meaning that describes an attractive woman. Evolving with the times, VoidPoint modernized her design from her 90’s incarnation that channeled the likes of Lady Death and Vampirella. Thus, Bombshell is not designed for the male gaze. 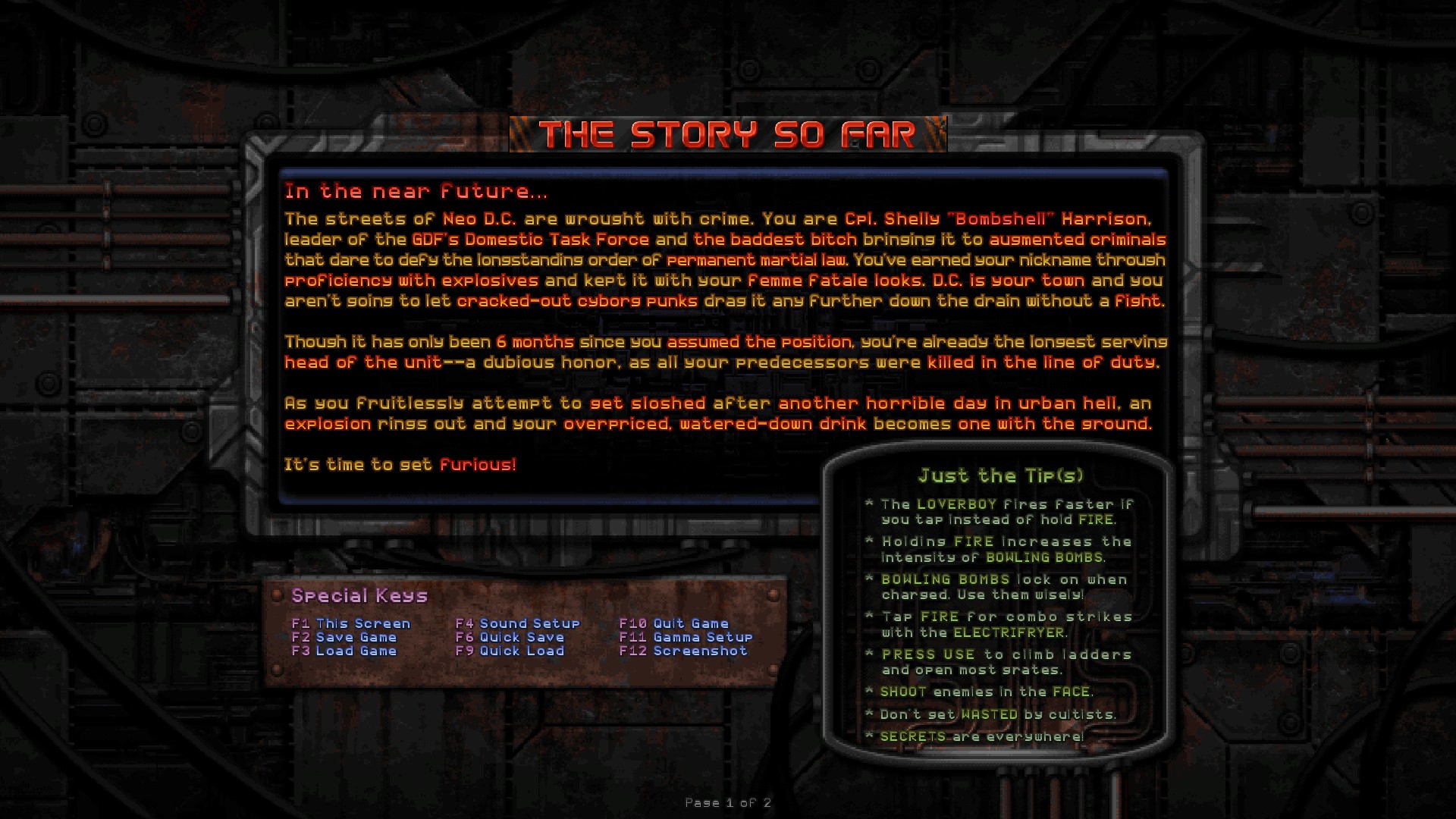 Ion Fury is unsurprisingly scant in terms of story. Players can hit the F1 key if they are interested in the plot that shapes the game’s near-future, cyberpunk-lite setting and atmosphere. Beyond a few paragraphs that can be read at any time (see picture above), the game very much reminds me of how Sonic the Hedgehog would chase Dr. Robotnik through multiple zones until the latter’s eventual defeat. Likewise, the protagonist, Shelly “Bombshell” Harrison chases around her nemesis, Dr. Heskel, while fragging robots and cyborgs and mutants, oh my! 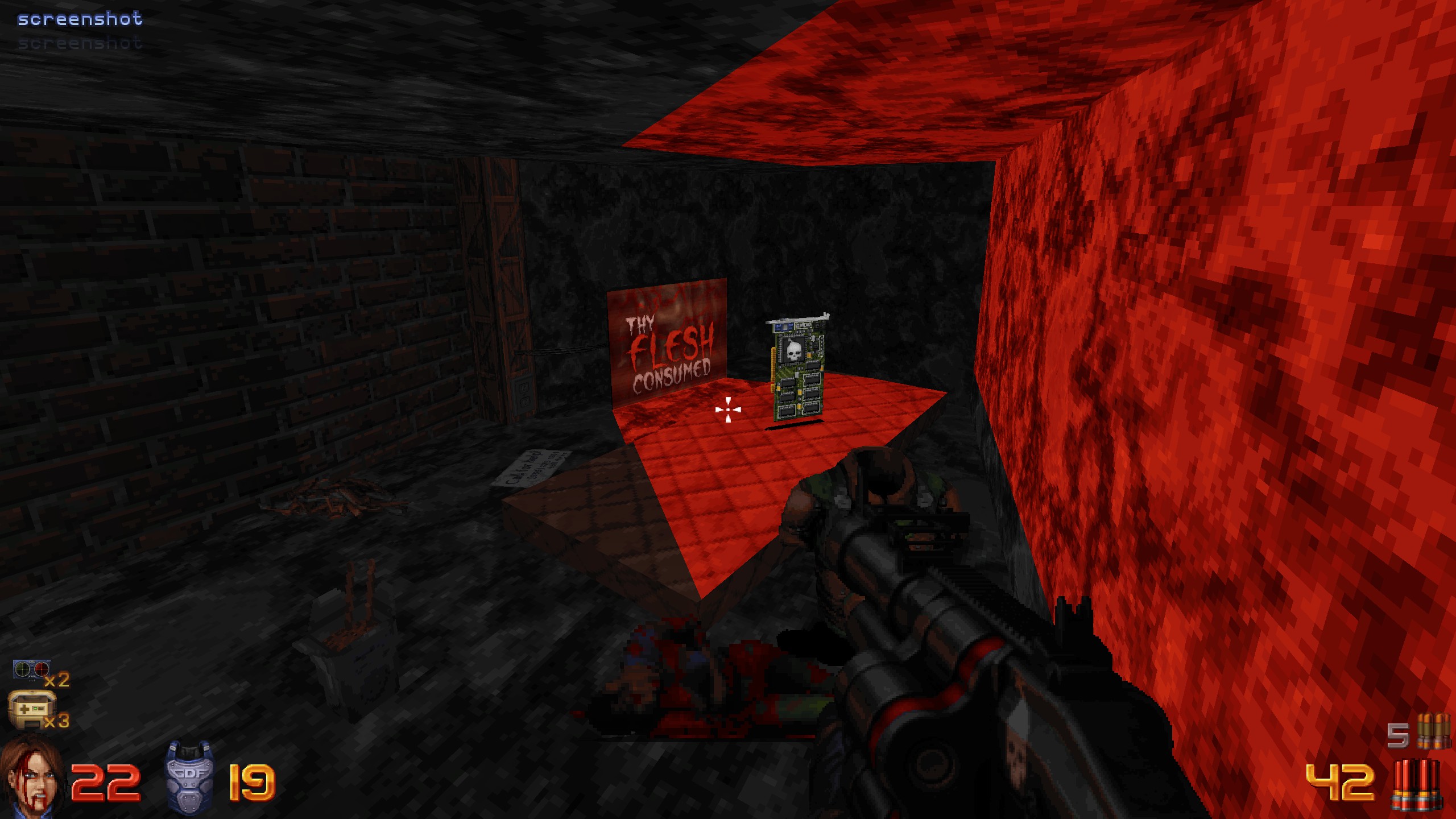 I appreciate my Doom Easter eggs accompanied by a power-up for infinite Bowling Bombs.

Of course, no one interested in playing a 90’s-style FPS would do so for its story. Ion Fury is the kind of video game players seek to blow up enemies in a cascade of gibs raining around an explosion shaped like a punisher skull. And it is glorious!

Playing FPS revolving around violence alone is not good enough. After all, most of us remember the complex dismemberment engine of Soldier of Fortune as a novel feature forever sealed away in a mediocre game. Thus, as with the best among FPS games, Ion Fury’s enchantment lies in its arsenal. I cannot think of another game that I have played in recent memory that offers as much versatility with its weapons as this one.

Now this is just silly.

For example, the starting weapon, a revolver fondly-named “Loverboy,” maintains its potency throughout the game. Additionally, its alternate fire function turns the weapon into a smart gun, locking onto targets that are difficult to hit, especially difficult-to hit airborne enemies. Every FPS includes a shotgun; the Disperser serves its purpose, and powerfully, rendering common foes into gibs; if point-blank buckshot is inadequate for the occasion, the Disperser’s grenade launcher will get the job done. Just make sure to have a power washer ready to clean up on aisle 7.

In fact, all of my favorite weapons explode face. I like to think of the Bowling Bomb as one of Bombshell’s signature weapons given the skull icon in the official logo. This is the weapon that turns hostiles into a confetti of ground beef and aforementioned explosion skull; effectively a grenade that rolls like a bowling ball, charged with the regular fire button, it becomes a homing-ball, seeking bogeys around corners, let alone those within its direct path; the alt-fire option lights the Bowling Bomb, turning it into a hot potato for traditional throwing and blowing. The cleverly-named Clusterpuck makes me chuckle just thinking about the appropriateness of its name as an oxymoron. Normally a proximity mine, enemies who wander to a wall or floor-installed Clusterpuck will trigger an explosive…cluster…reminiscent of the Duke Nukem Devastator; its alternate fire option widens the radius of the explosion, but at the cost of damage due to the combustion spread. 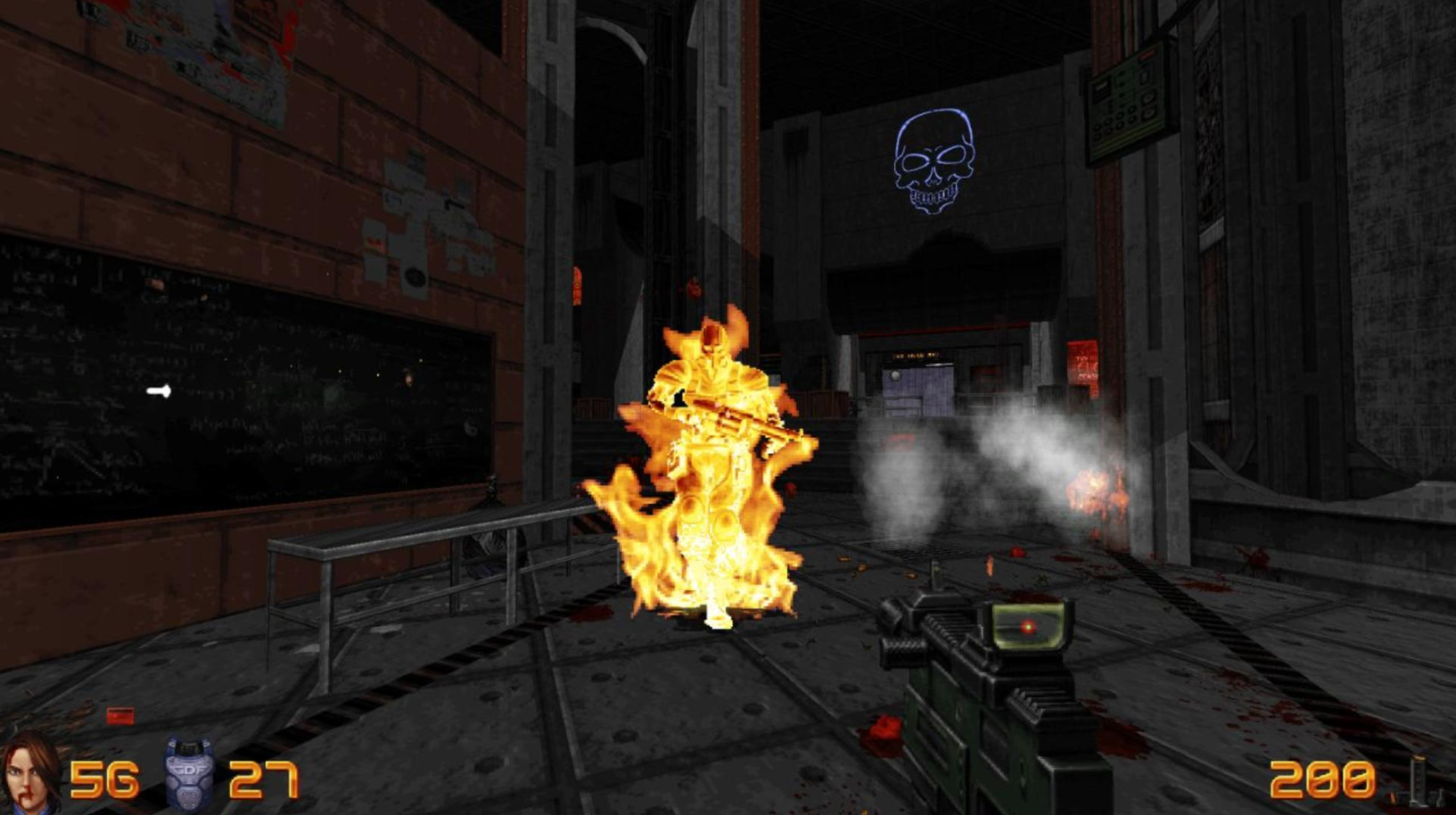 Less exciting weapons include the chaingun, which functions exactly as expected; its “alt fire” option offers a tame constant wind-up. At least it is absurdly powerful, which is more than I can say for the Electrifier, a police baton that shocks enemies; it is best used to kill one-hit enemies like spiders while traipsing in air ducts. I want to like the Penetrator, an Uzi-like weapon that immolates weaker enemies until they die; its alternate fire disappointingly consists of Penetrators akimbo, yet there are not enough ammunition pickups in the game to justify using one, let alone two, especially because higher-level enemies are seemingly resistant to this weapon’s scorching capabilities.

Anyone have a taste for fried spider?

Given that the ion bow is Bombshell’s other signature weapon, I find it woefully underwhelming. Because its main function is precision, and its selection key is located on the far end of the keyboard, I anticipated it to function like a cyberpunk sniper rifle or rail gun. Instead, it feels like a more powerful, mid-ranged Electrifier that can score the occasional headshot or inflict electrolysis. Its alternate fire is not even worth mention, because it is even weaker despite requiring a charge and uses too many bolts.

I stand by the ion bow being weak, but as a power-up weapon, it functions how I wish it would always work.

Even in the face of these criticisms, Ion Fury manages to transcend them. Nostalgic fans longing for the days of Build engine games can pump up the difficulty to “Ultra Viscera” or “Maximum Fury,” and the game delivers an adrenaline-pumping, pulse-pounding, exhilarating escapade, while n00bs can take things easy and still find a scintillatingly satisfying experience. Quality-of-life additions like auto-saves and headshot sensitivity sweetens the pot!

Did you notice, dear reader, that I neglected to discuss Ion Fury‘s music or its rogues’ gallery? That is because I do not want you to waste any more time here. So stop reading, grab some Bowling Bombs, and create ground beef confetti of your own! You will not regret it.

If “Keep That Same Energy” was a .gif

Ion Fury is the game Duke Nukem Forever should have been.