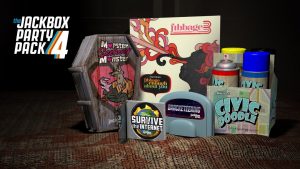 Jackbox Party Pack 4 relies on users generating content for gameplay. This means you have to watch who you allow to play as anything can be horribly taken out of context. While this can happen, the games do not necessarily help. For instance, Fibbage 3 has a question of, “the first sports bra was created using two _____ sewn together.” It was easy to write answers which some will find offensive. The same goes with Civic Doodle, where you draw faces and make things up from random partial drawings.

The great thing is that every game with the exception of Monster Seeking Monster has a family filters! This removes questions or premises that may be easy to misconstrue. Playing Jackbox Party Pack 4 with my youth group was much easier given I am not exposing them to content that leads them to wrong thoughts. 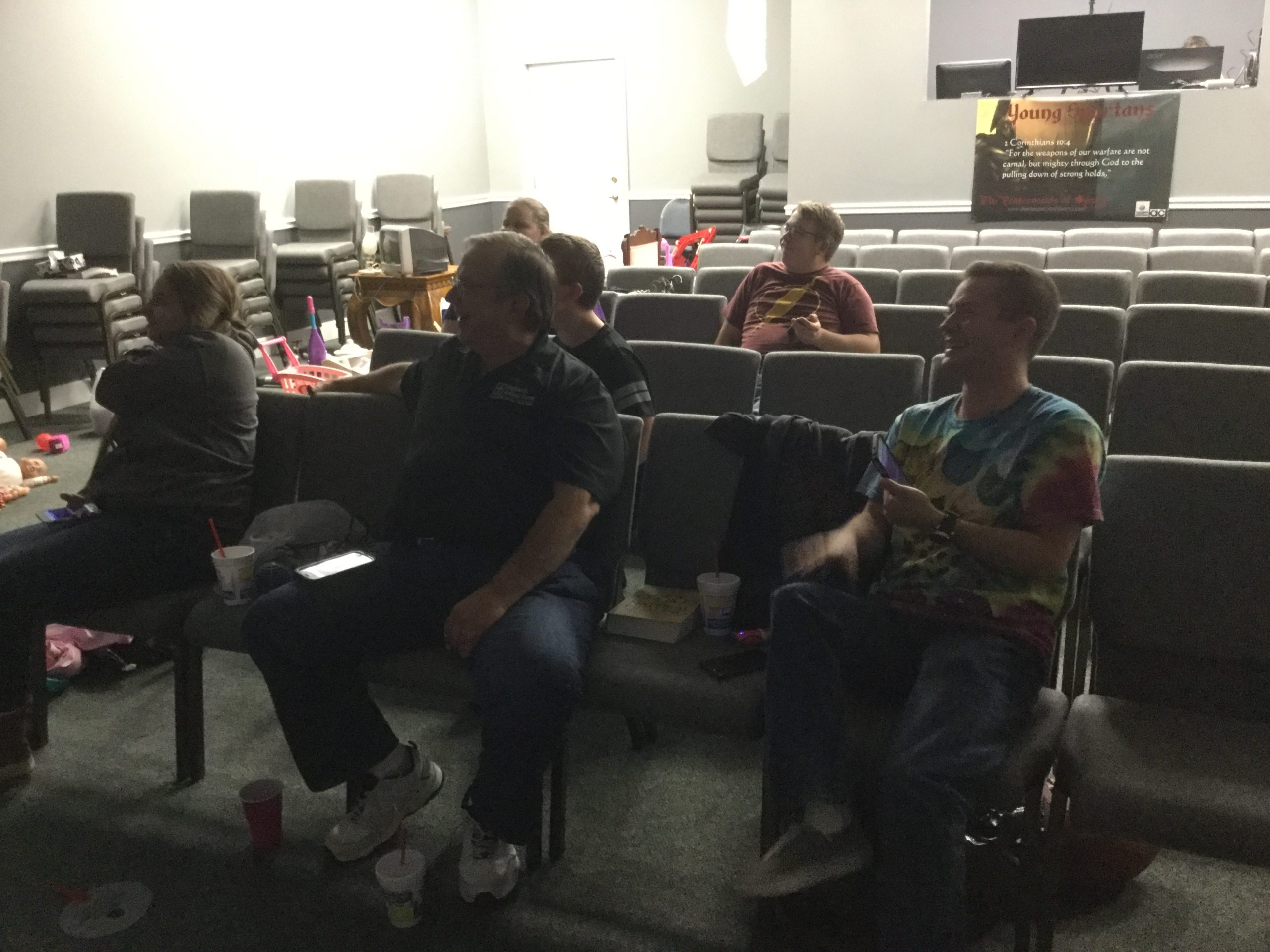 My great group having fun!

Monster Seeking Monster did not have anything that needs filtering. The player creates all content for this game, although it is a dating game so it is easy to end up with off-color content.

While Jackbox Party Pack 4 has mild language in the ESRB rating, I never heard any language. Each games host spews much nonsense, so keep an ear open for the H or D words. Drug reference is another thing to watch out for in the questions, although I never came across anything during our play through.

Where to begin? My youth group and I have been playing the Jackbox games since Jackbox Party Pack 2. We are not a large group, but we do enjoy playing games similar to Apples to Apples. These card games get boring after awhile, with people playing the same combinations over and over. The same thing happens with most board games. This is not how Jackbox Party Pack 4 or any of the previous Jackbox games function at all. 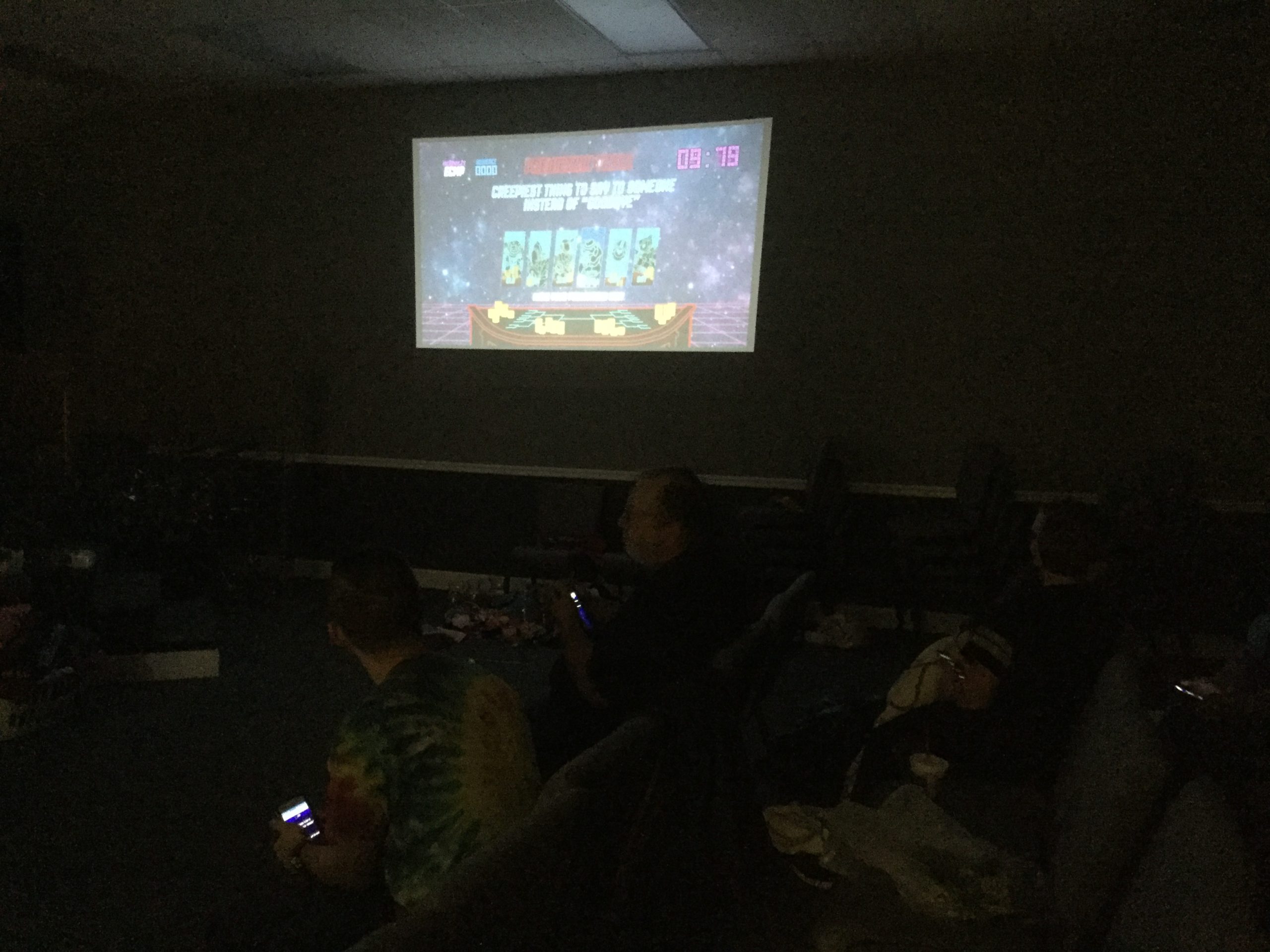 As you can tell, we love playing on a projector.

The key is using something almost everyone has: cellphones and tablets! You log in through a webpage using a code given at each games opening screen. Once all of your buddies are in, the computer host gives you a short skippable tutorial to help you on your way. It is really that simple and easy.

Given Jackbox Party Pack 4 is not one game but five, I will give each a separate review section as to better serve you in figuring out which to play. I will arrange these by my groups favorite to least favorite. We may enjoy one more than another, but the beauty of creating your own content means you may like one of the games more than we did. They are simply a structure to make your own fun!

This is by far our favorite! Fibbage is the game that introduced me to the series. Several of the Jackbox Games are available a la carte, so I bought the original when it was on sale. Because of this, we buy every Jackbox that comes out. 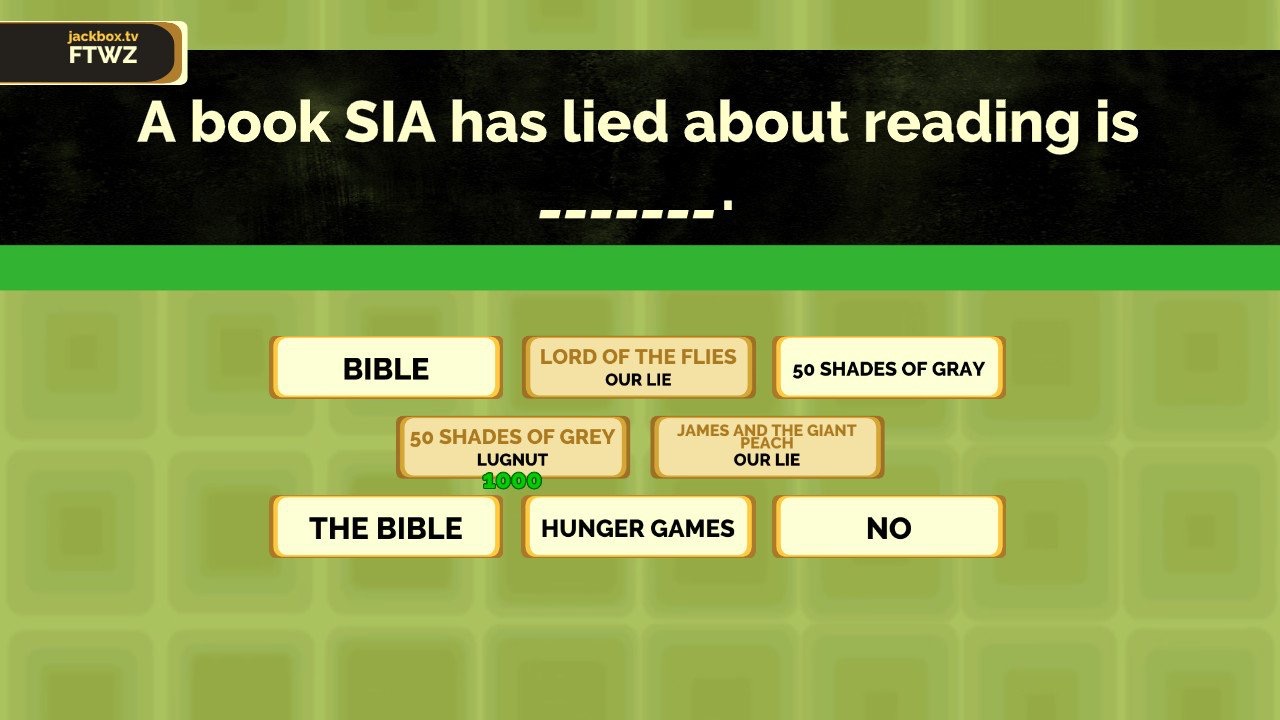 This is a good example of the Enough About You mode.

Fibbage 3 is very similar to the original. A trivia question is asked, and the players must come up with a good fib that could cause other players to choose it over the truth. The key is trying to make up something either your friends want to pick due to it being funny, or confusing them into thinking your lie is the true answer.

While Fibbage 3 is much of the same with new trivia, it shines in the new mode “Enough About You.” The difference in Enough About You is that each player answers an inquiry about themselves. After this, these questions are used instead of random trivia. Enough About You succeeds in that it requires your group to give out personal details which allows you to learn new things about your friends or acquaintances. Party games that do this are always winners.

Bracketeering is awesome. It follows a normal bracket setup (as shown below). Each person’s answer to the current question is in battle with another’s until one emerges the victor. The first round can be a bit boring, because the same question is in use for every bracket fight. It’s the second and final round where everything heats up. 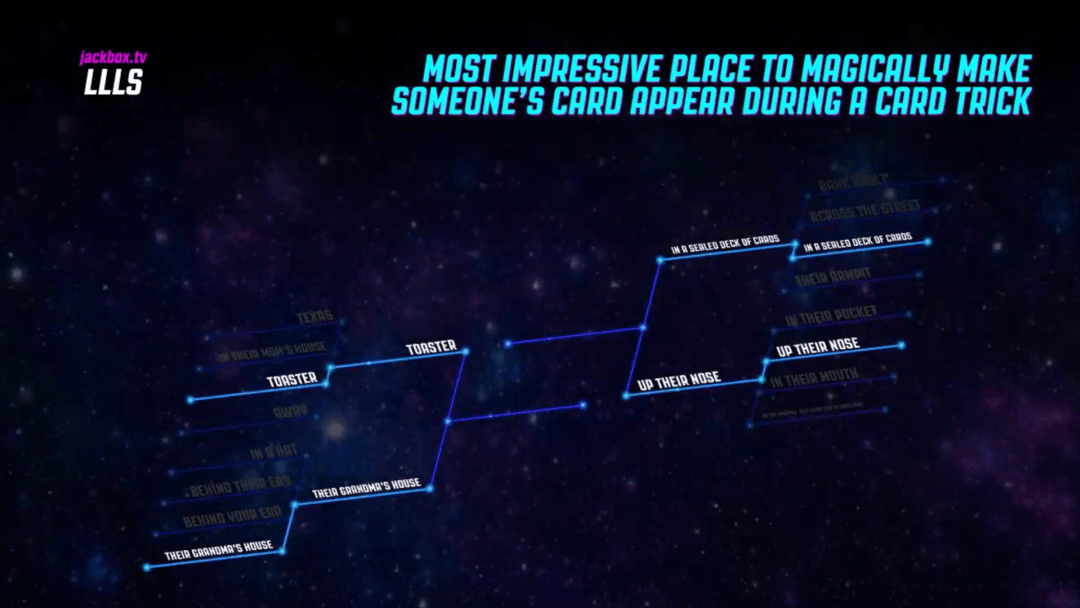 An example of how Bracketeering is set up.

In the second round, the players answer a question, only to find the bracket fight will occur under a different question. One instance we encountered was answering the query, “What is another name for Eggs and Bacon?” only to find the battle of the brackets resumed under “What are the names of the twins in Disney’s new TV show?”

You cannot help but laugh at the hilarity that ensues over the switcheroo, but the final round is even funnier. Not only does the question change, but the game replaces it each time the bracket moves forward. While the beginning is slow, Bracketeering speeds up to a uproarious conclusion. 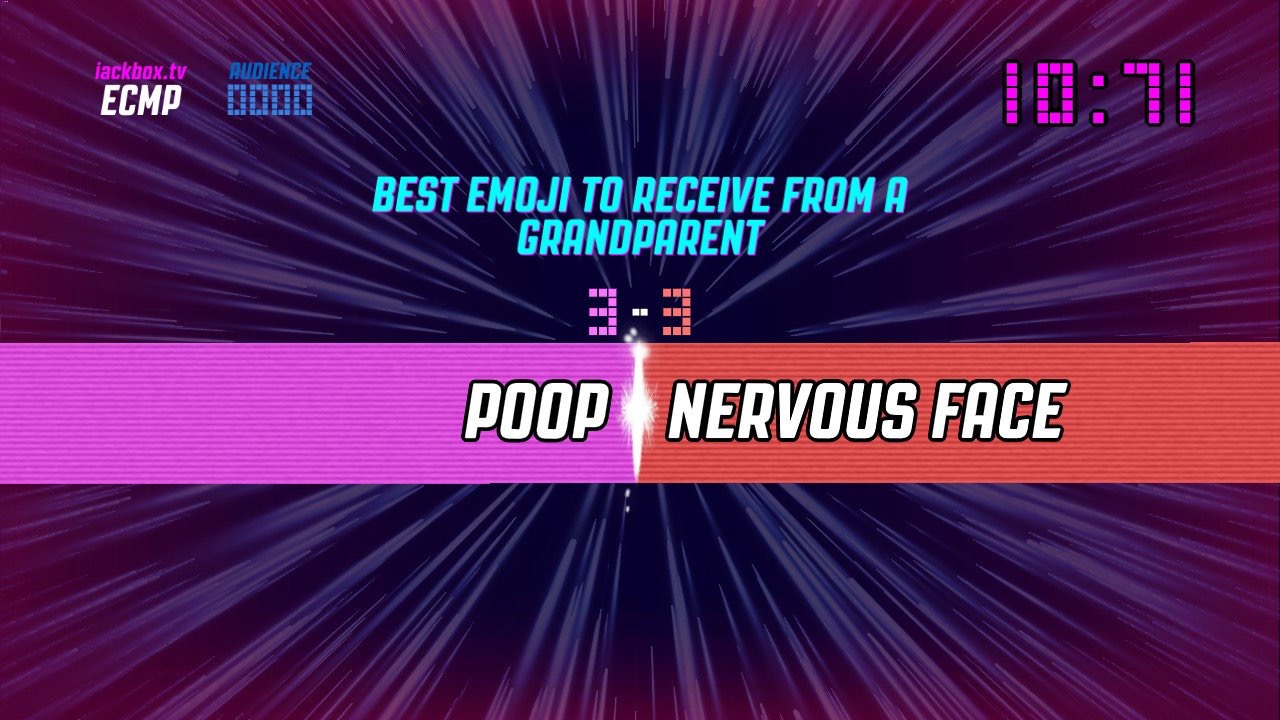 There are many rollicking combinations my group came up with.

This is another enjoyable game in the pack. In Survive The Internet, your host takes you through different websites with the intention of causing havoc. You write a comment based on the prompt given, which are sent to another player. They then twist them to be ridiculous to a certain headline. The person with the most votes for funniest headline wins.

Survive The Internet is unique in how it works. There are not many Jackbox games in which you piggyback off of other people’s answers. This makes for a fun idea, and the original commenter gets pity points. Our favorite stage of this competition is the Photo Sharing round, where each person answers a question and the next player receives a picture from said response. 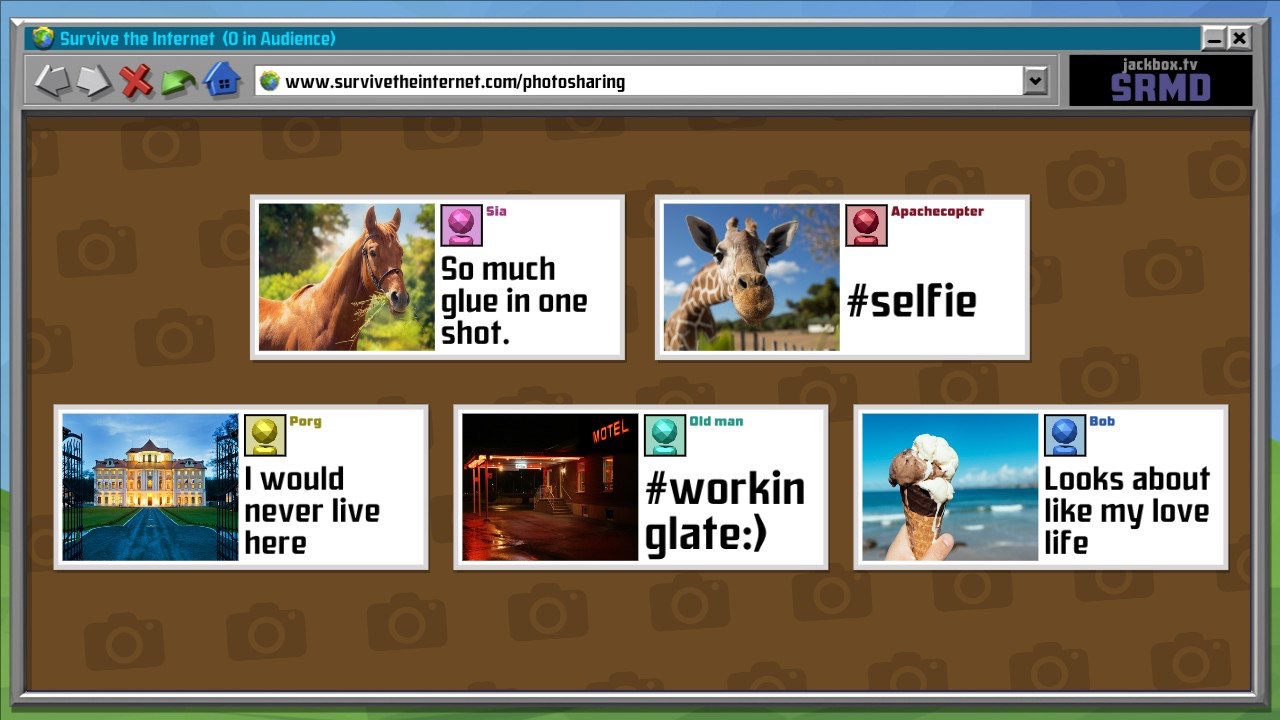 The best part of Survive The Internet was the final round, Photo Sharing!

Our biggest issue in this game arose due to user error. Survive The Internet does not always explain itself in the best way, and left some of us questioning how to answer each webpage. On the crowdfunding page, you are responding with a title to what someone would have commented. An example, I write “This makes me cringe” to the prompt I am given. Some of my group might assume they are replying to my comment instead of coming up with what I am commenting on. Despite this flaw, you can not only Survive The Internet, but enjoy it.

This one is a toughie to review. The drawing games are difficult because everything you sketch depends on the quality of your device. Tablets are much easier to use, as are phones with styli. Civic Doodle is enjoyable, but one of the weaker offerings of Jackbox Party Pack 4.

You begin as a group of artists a town has hired to finish the partial creations of flash designers. The host and mayor run you through what you will be accomplishing, and then it’s off to work. This is a competition, so you start competing in twos, adding onto the previous winners. This is where the game gets a bit frustrating. 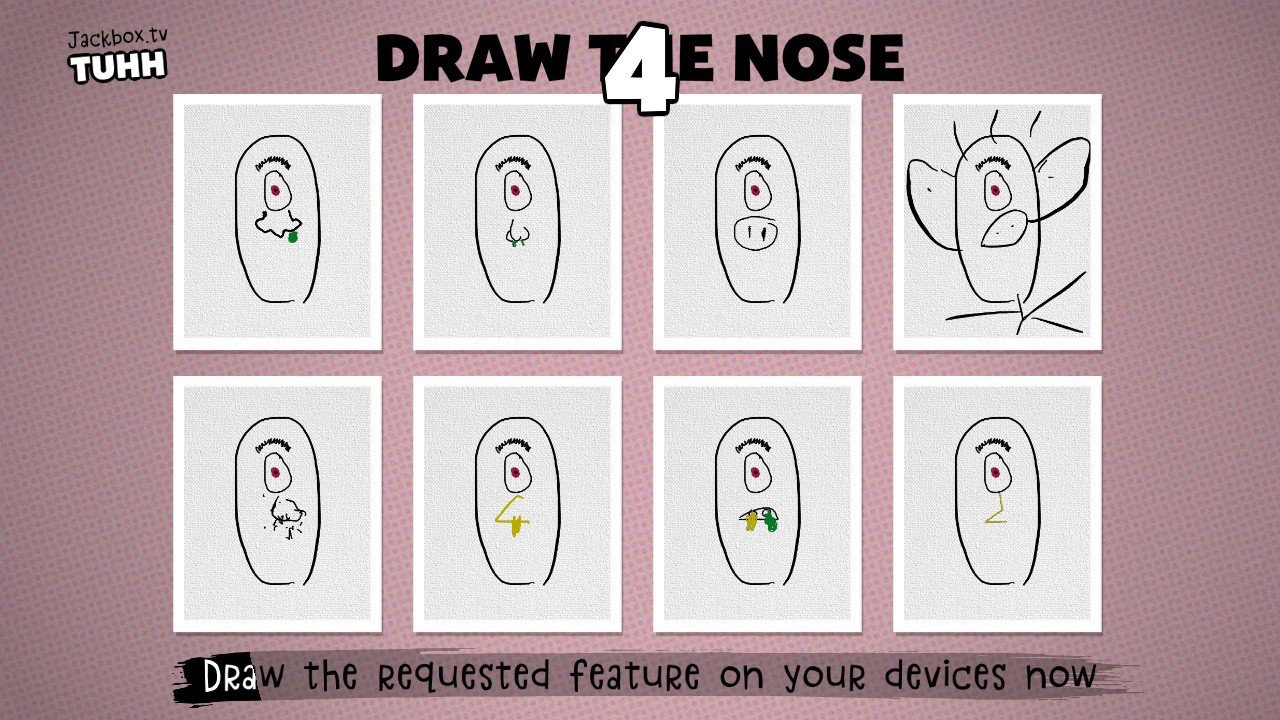 Some people go a bit nuts with their ideas for our portrait.

First off, you may get a second chance to add to a picture. While additions are nice, it seems to me that if you end up with a bunch of different opinions no one may like the painting in the end. This leaves players feeling unaccomplished, which makes a party game unsuccessful. The second is technical issues. The game is server-based, and as the winning drawings populate so new features can be drawn, several popped in missing previous illustrations. They still show up on the new artists phone, but that does not help when you are attempting to vote for your favorite.

Issues aside, the final masterpiece to draw was our favorite. The mayor decides to decorate city hall with the likeness of a towns person. After a name is given, the groups job is to add to a blank face feature by feature. As shown above, there are many hilarious combinations you can create. If each round had the level of amusement this one did, I would be ranking Civic Doodle higher. 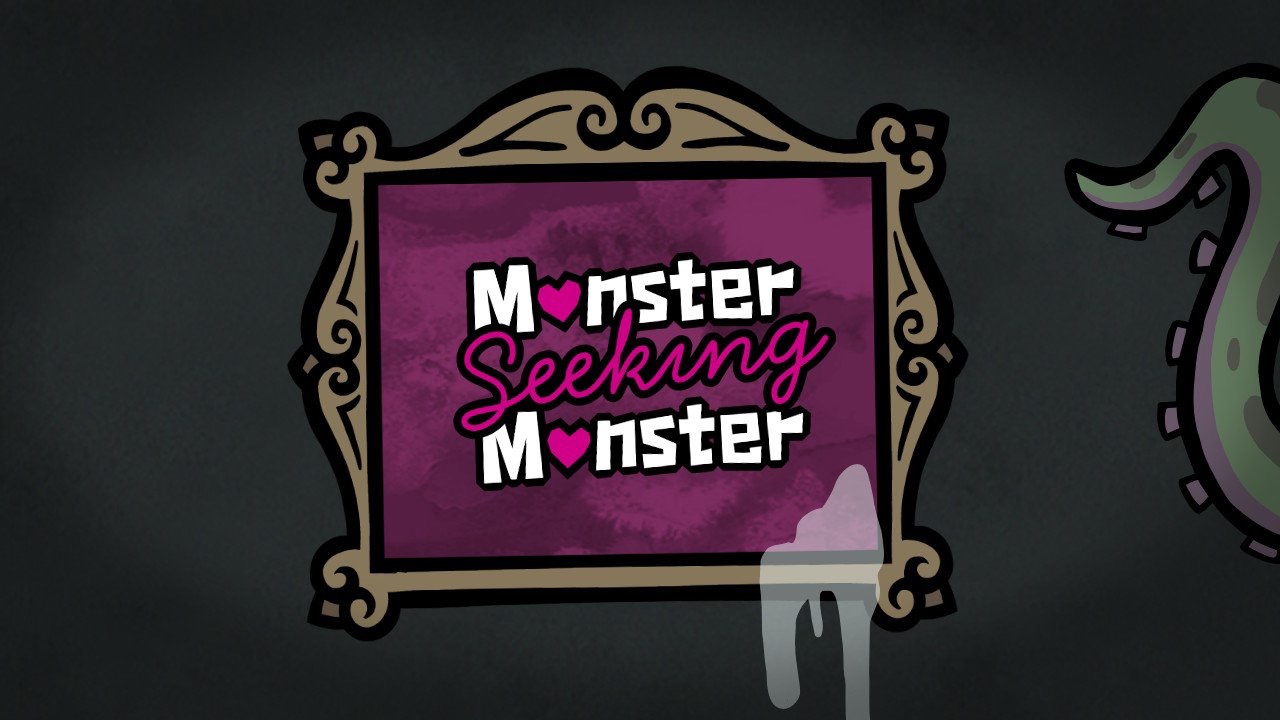 I believe it’s easy to find the monster of Jackbox Party Pack 4.

This one is a bit confusing and odd. You play as a group of monsters setting up dates through text messages between each other. Especially in a batch of people like a youth group, the concept has trouble working. The game gives you powers that can affect the outcome of the game, but it takes playing this game at least once to figure out what’s going on. There are powers which cause you to gain hearts (the key to winning) but the tutorial does a poor job of explaining what the objective is, why you are doing what you are doing, and how to achieve victory.

Our enjoyment was also hampered by technical issues. In the beginning the server did not connect, causing us to lose our progress. Soon after getting everything working again, sending messages did not work most of the time. This could have been our internet connection, but all the other games had no similar issues.

When you finish Monster Seeking Monster, you honestly do not know why you have won. While you could play this multiple times in order to get to know what you’re doing, the other games set themselves so far ahead that you just don’t care as much. This is the last place game of Jackbox Party Pack 4. 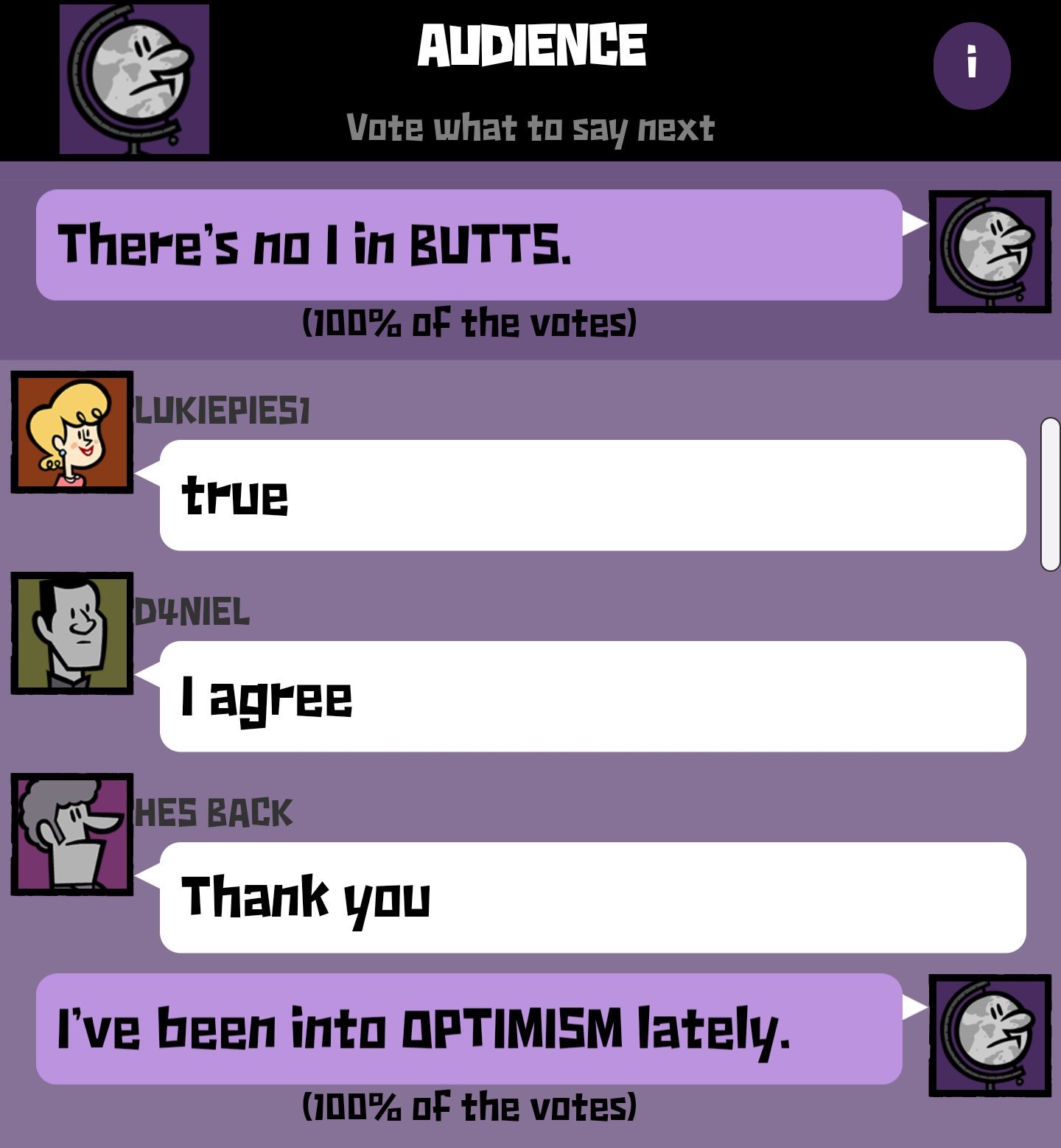 The computer audience is a hoot to text.

One other thing I enjoy that has been added to Jackbox Party Pack 4 is a sharing feature. At the end of each game, you have the ability to share gifs or pictures from the previous match you have played. Every single answer or drawing, even the ones your friends send are available to post to Twitter or Facebook.

My group and I have thoroughly enjoyed our time with Jackbox Party Pack 4. Even though we have run into technical issues, and are not fans of the final two titles, this is another Jackbox we will game for quite a while. If you are looking to break the norm of the party game, Jackbox Party Pack 4 is a good way to do it!

Despite a few flaws, Jackbox Party Pack 4 succeeds with an enjoyable new mode for Fibbage 3 and other stellar offerings in Survive The Internet and Bracketeering. Some work may need to be done to improve technical problems, but that should not stop you from grabbing Jackbox Party Pack 4!