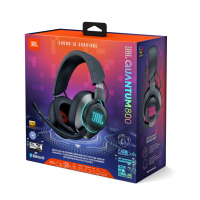 This year at CES 2020, JBL unveiled their first line of gaming headsets. You likely know that name from a pair of headphones or a Bluetooth speaker you’ve purchased in the past. CES is the Consumer Electronics Show, which takes place in Las Vegas every January. While this is not a convention we have attended, we received a press release in our contact box when JBL made the big announcement. Later that day, we received another email with an opportunity to review a headset from the series. While we significantly dialed back our coverage of gadgets some years ago, we still review such things in the gaming department that we think could benefit our audience and their gaming experience. We took that opportunity and were sent a Quantum 800 headset not long after they launched this spring.

JBL’s Quantum series includes seven headset variations and the Quantum Duo computer speakers that are coming soon. Their flagship headset is the Quantum One, which includes head tracking technology that I personally would’ve liked to test out. However, the 800 is the next best thing on the list with Bluetooth wireless connectivity, precision audio with their proprietary QuantumSURROUND technology, and more. Of course, with all of those options available, that means prices will vary when you’re finding the one that is right for you. The One and 800 come in at $299 and $199, with the Quantum 100 being the least expensive at a reasonable $39.99. Now that introductions are over, here comes the part where I share my experience and let you know if the price is worth the purchase.

I have been able to use this headset in just about every situation I can think of: gaming solo and online on all the platforms I own, getting some writing done while listening to music, podcasting, and even playing Dungeons & Dragons over Roll20. While it meets most of my needs, the product goes above and beyond in most areas and lacks in others. Of course, the first thing I did after opening the box was plug it into my PC for set-up.

The set-up process is straightforward, though it takes some slight tweaking in the audio device settings of the PC. When plugging in the headset, you’ll get a prompt to install JBL’s quantumENGINE software, which includes a series of fun features such as an equalizer, RGB lighting, and mic settings. Most of my time in the software was spent playing with the RGB light and putting the spatial audio to the test. I was initially having some connectivity issues between the headset and the software. Still, those problems turned out to be device-related as the rep sent me a new headset immediately after deeming that the original was defective. 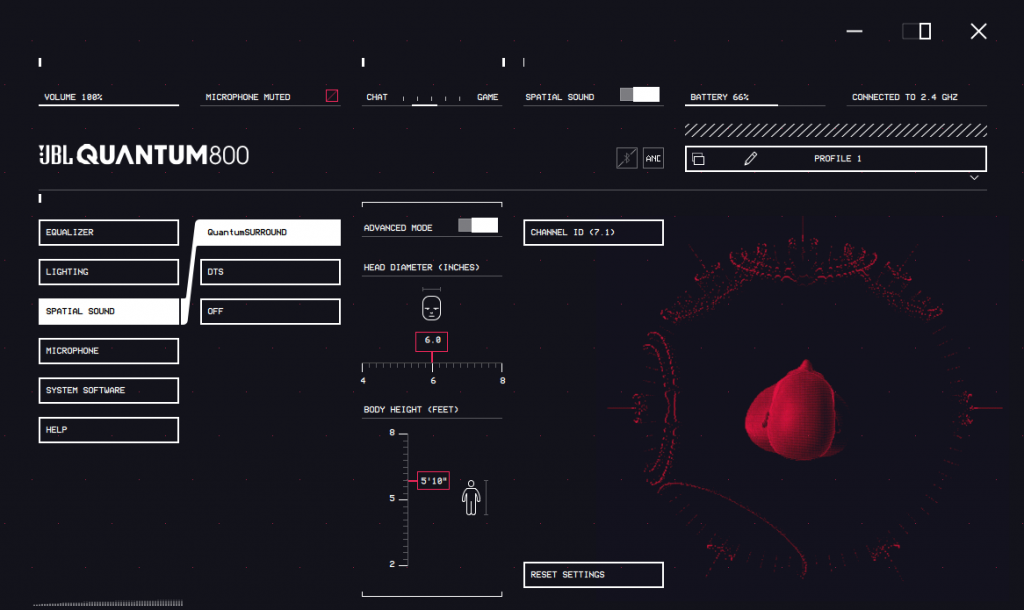 After I finished tinkering with settings, I first tested the sound with the VALORANT closed beta. I didn’t have much time to start a whole match that afternoon, so I spent time in the firing range and listened to the sounds of various guns and heard bullet shells fall to the ground as if they were right beside me. Later that night, I tested the audio again while playing Halo 2 Anniversary; I was very impressed when I was able to locate an elite by hearing the exact direction of its gunfire, and then turning around to melee another as I could hear them breathing down my neck. These are the precision audio features at work, and I was delighted with the results. 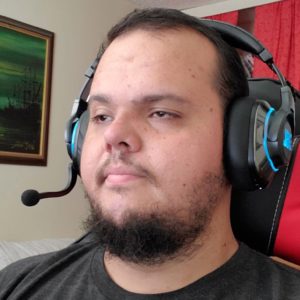 Looking like something out of Tron: Legacy with that lighting.

Sadly, I did discover a drawback that night, though I do not blame the product. Microsoft’s Xbox One consoles are not equipped with Bluetooth audio support, so I couldn’t plug in the dongle and fully utilize the capabilities of the Quantum 800. I was able to use it with the 3.5mm jack and experience the high-quality sound via the Windows technology that the console has built-in, though. On my PS4, I was able to use the headset to its full extent when dropping into some Warzone with my buddies.

Now for the design, which is unmatched by any other headset I’ve owned so far. It’s got a sleek look with the RGB located in the ring and logo on each side, all the buttons and sliders are easily accessible, and the mic sits a nice distance away from my face. The buttons available on the headset are volume, game/chat balance, active noise-canceling, and power. I especially appreciate the ANC button, since all it takes is one push to activate the talk-through mode and hear the person that is trying to get my attention. This headset is also hands-down the most comfortable headset I’ve ever used due to the memory foam-wrapped leather over my head and ears. Unlike past headsets I’ve used, my ears never hurt or feel uncomfortable—they just sweat when I’ve had it on for a significant length of time.

My biggest complaint with this headset is that I wish the mic were better. I went into Audacity to test the microphone, and the quality was more inferior than I expected it to be. The program I tested it in is the same one I use to record our weekly podcast with, and though I never expected it to replace my Blue Yeti mic, I assumed it would be on par or close and expected a much cleaner sound than what I heard. I find this to be a significant setback because communicating with others is half of the reason that anyone is in the market for a good headset. 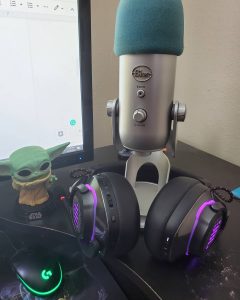 The Child was ready to podcast.

The final setback I need to mention is the battery life. The headset is advertised to have 14 hours of battery life, which has not been the case in my experience. I haven’t done exact math on how long it has lasted, but the most I’ve got out of it was 8-10 hours before hearing the warning sound that it was about to die soon. Honestly, this is a minor issue for me since 10 hours is all the time I need. On the plus side, it only takes around 2 hours to charge it via the included USB cable, so I tend to plug it in for a while before I go to bed or when I get up in the morning.

On one last related note, there isn’t any reason to turn on the headset when using the 3.5mm jack. All of the headset’s extra features are attached to the Bluetooth capabilities, and it will turn off on its own after a short time to save battery power. That means if the only consoles you own are an Xbox One or a Nintendo Switch, then you shouldn’t buy this headset.

Even as I worked with the representative on the issue I was having, I had been enjoying the JBL Quantum 800 more than any headset I have ever owned. I wrote this review while listening to the Tetris Effect soundtrack, which is an excellent reminder of how versatile this product has been for me; it even works well on my phone. Though I’m not very satisfied with the mic, my friends have told me my audio sounds great on their end—if they are happy with it, then I am too. Lastly, I highly recommend this headset if you have a PC or multiple devices. If you only own a console or two, you won’t be able to take advantage of every feature. JBL has come out swinging, and I look forward to seeing what they can do in the future.

Even with minor setbacks, JBL's first foray into gaming brings comfort and immersion with this high-quality headset.