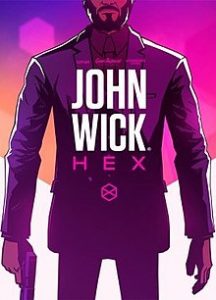 Here at Geeks Under Grace, and among friends, I’ve become the resident John Wick fan. I was excited to see we’d be getting a full John Wick video game, not like the VR experience that came out a few years ago. With the announcement, we also learned that Bithell Games would be developing the game.

Knowing the vetted indie game dev Mike Bithell was behind the project was also exciting, because that meant we were going to get something very unique. Instead of giving us the Baba Yaga’s skillset in a close-quarters third-person shooter, we enter his mind in the tactical strategy of John Wick Hex. After my time with the game, I was right to assume it would be unlike anything I’ve ever played.

Violence: Players take control of John Wick, a deadly assassin. Gameplay consists of ranged and close quarters hand-to-hand combat. Players are strongly encourage to use firearms in the game and must use them to kill bosses. There is very little blood or gore to be seen, but when characters are shot, they violently react and scream in pain.  On a few occasions we do see some blood under the bodies of dead characters. 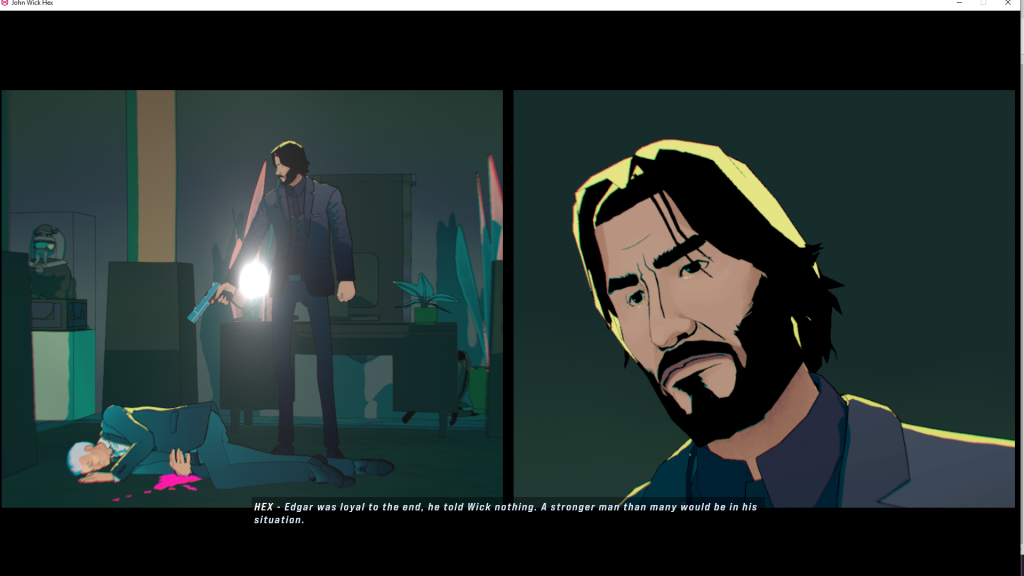 The events of John Wick Hex take place long before the events of the three films—before he meets his wife. We are introduced to Hex, who has captured Winston and Charon of the Continental to claim his birthright. Troy Baker voices Hex while Ian McShane and Lance Reddick reprise their roles from the film. It’s always good to see actors hang on to their roles when licensed products are involved instead of stand-in voice actors. John himself is a silent protagonist in this game; that means no Keanu, but gives the player more agency in filling that role.

John Wick Hex has a unique cel-shaded art style that looks as if it came from a previous comic adaptation, but it’s completely original. It was the right choice for the developers to go for a stylized look to focus on gameplay instead of trying to achieve realism. The music also stood out and resembled tracks I’ve heard in the films. Austin Wintory composed the soundtrack, who is known for his work on games like Journey and The Banner Saga. The overall presentation is one of the many factors that help the game stand out. 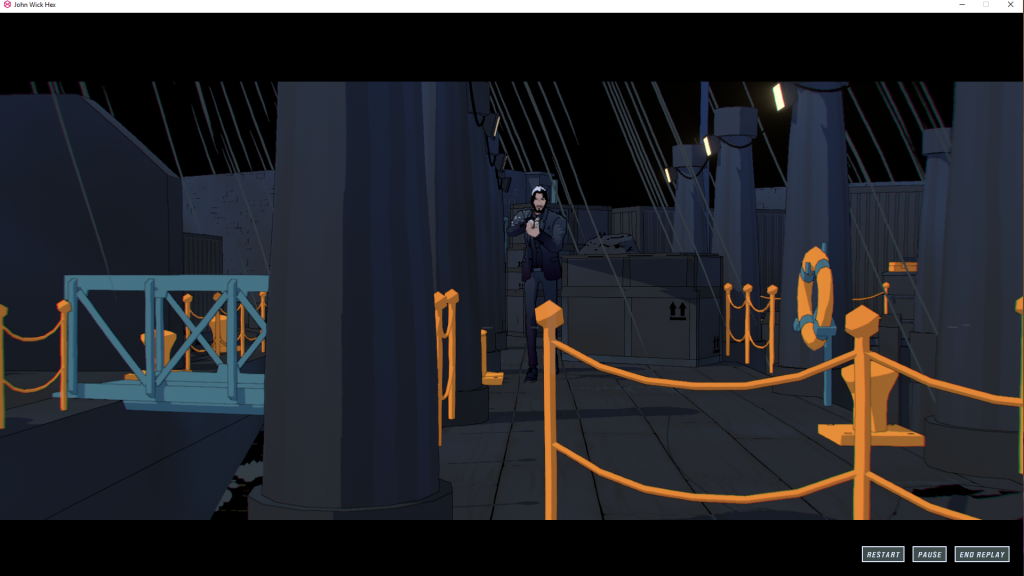 As was stated in the introduction, John Wick Hex is a tactical strategy game. In each stage, I was tasked with planning my route through each area, deciding the importance of my actions, and which enemies to take out first. The ultimate goal of the experience is for players to feel as if they acted out a scene right out of a John Wick movie. For the most part, I believe the developers were successful in bringing their vision to life.

Gameplay takes place on a staggered grid. The main objective is to get from one side of a stage to another and take out enemies that stand in your way. As you follow the grid, you have a limited range of vision and a timeline at the top of the screen. The timeline reminds me of a JRPG in such a way that you must plan your actions around it, because it will keep you one step ahead. For example, you’ll know when an enemy is entering the room and can take a shot at them as they walk in. Actions are not turn-based like typical strategy games such as XCOM, but occur in real-time as your character moves similarly to Superhot. 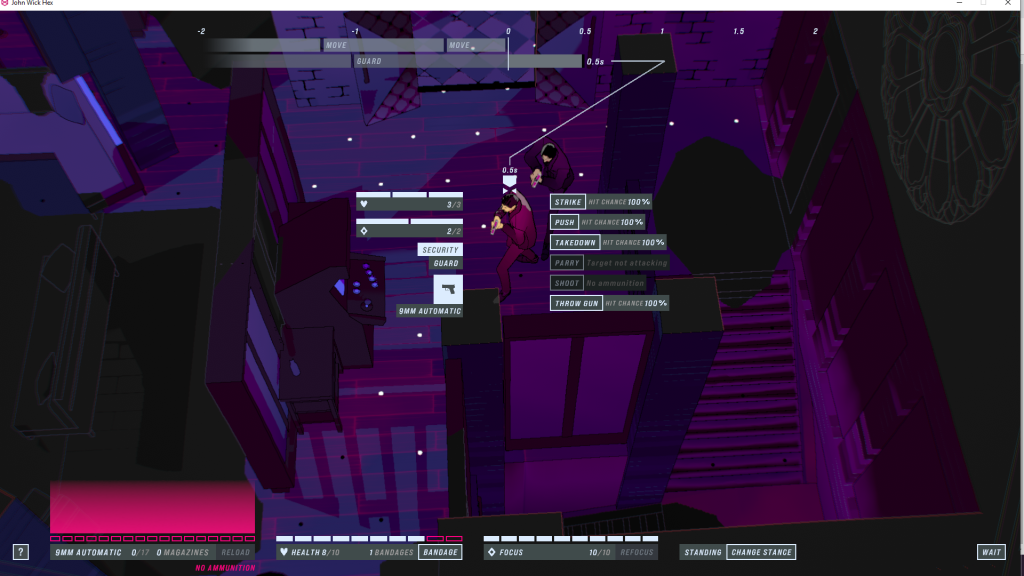 I had a number of ways to subdue him at close range and eventually pick up his gun.

When an enemy is in your line of sight, you can either shoot at them or throw your gun. You can parry, strike, takedown, or push enemies that are within close range. Many of these actions are great for subduing an enemy while simultaneously keeping John on the move. I utilized takedowns to either help me dodge a bullet from another enemy or to move in towards them if I was too far away. The push action was great if I didn’t have time for a takedown and needed space to finish off an enemy. These close-quarter actions are a great way to authentically thread the gun-fu needle to give us the action that we get from the John Wick movies.

There are various enemy types to watch for in the game. Many of them vary on the kind of ranged weapons they use, but it is important to be on the lookout for the unarmed brawlers. Those are the enemies that aren’t afraid to get close and unleash a few strikes and takedowns of their own. There are also a few boss fights that occur, which can be even trickier since its required to get in close and stun them before any shots you take will do damage. There was enough difference in the enemies to keep me on my toes and stay aware of my surroundings. 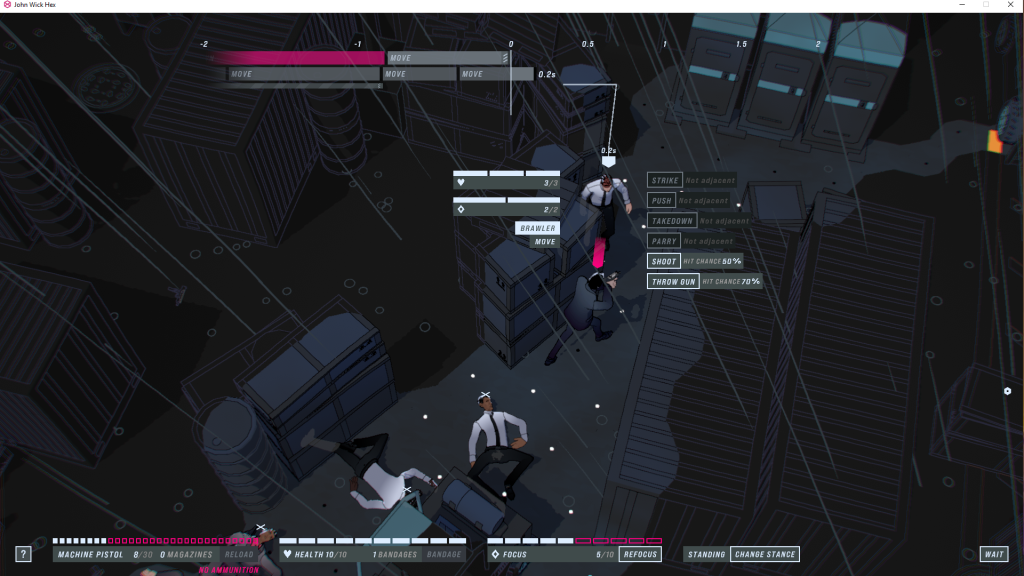 These brawlers sometimes travel in groups.

One of my favorite features in the game is also one that needs work. After each stage is completed, you have the option to watch a replay of everything that you did. While its fun to see the mission play out in real-time, that’s also when the flaws show up. Fixed cameras across the stage layout will trigger as John moves through and will change as actions occur, so it can be tough to keep up with the action. What would greatly help with this issue is if we could edit the replays and decide the placement and behavior of the cameras. When viewing the replays, you also see how stiff the movement and actions are—due to the tactical nature of the gameplay.

Before each chapter is also a planning phase, in which you use an allotted amount of points to prepare. Points can be used to place a weapon or extra healing items in one of the stages. The other way to spend them is on modifiers that work in your favor and stay active across a whole chapter. Proper planning can be beneficial, especially if you end up having to heal often. Although, I made the mistake of not being conservative with my healing items and ended up in a boss fight without anything. I had a much more difficult time due to my failed planning. 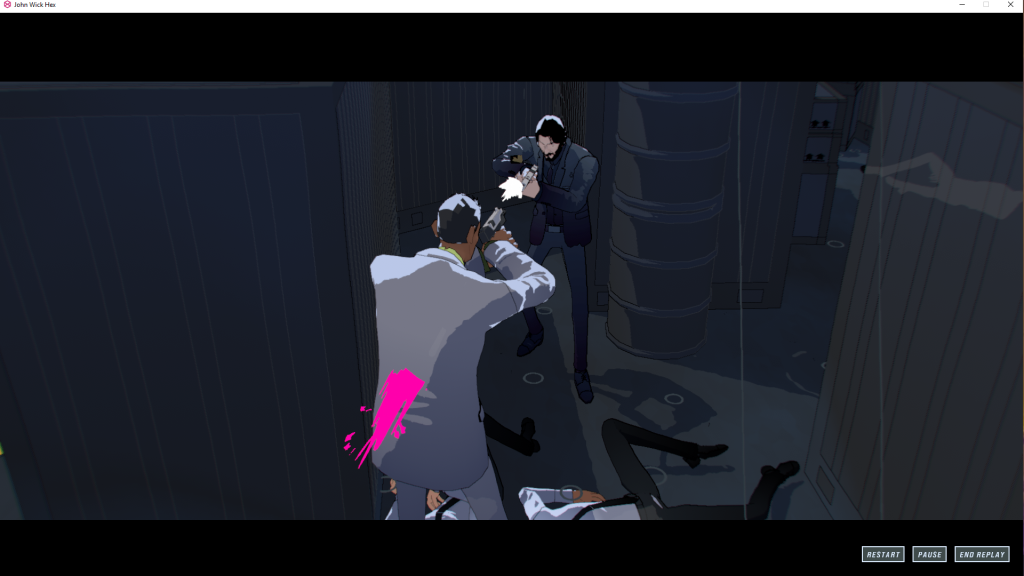 The replays capture the best and worst moments of your run through a stage.

John Wick Hex can be very challenging, but the same can be said for others in the genre. I enjoy how it had me thinking ahead and to be more observant. Though I have enjoyed my time with the game, I lost interest at some point. The reason is likely because nothing changes after awhile. Following a few chapters, the formula becomes very “rinse and repeat” as I learned how to deal with all of the enemy types, and each boss encounter boiled down to the same strategy. The story doesn’t go anywhere very interesting, but it succeeds in being a reason for players to become one of the deadliest action movie assassins.

I didn’t come into John Wick Hex expecting it to blow my mind. I wanted a unique experience based on my favorite action series of the decade. Bithell Games has delivered on my expectations, but could fine-tune a few things to improve on the experience. The tactical gameplay ultimately helped me enter the mind of the titular character and watch the results play out as it would in one of the movies. For that reason, my time with the game was still worth-while.

The way that Bithell Games has had us step into the shoes of the Baba Yaga is a much more unique approach than we could've asked for, but there is plenty of room for improvement.