The uprising has begun. Fruits and vegetables, long content to be grown in prison like greenhouses solely for our consumption, have fought back. Climbing up the evolutionary ladder with startling speed, they have already driven mankind to the brink of extinction. Now it falls to four unlikely heroes to venture into uncharted territory to fight back the leafy menace, or die trying.

If the above sounds like deranged ramblings, don’t worry. It isn’t some fever dream or a plot summary to a poorly conceived Cloudy with a Chance of Meatballs sequel. This is simply the premise of Juicy Realm, a newly released Rogue-like game. While the premise is enough to make any evolutionary biologist curl into a ball and cry, it does lend itself to an amusing if simple game filled with charm.

Spiritual Content: A group of late game enemies appear to be undead or ghostly apple cores. That’s about as supernatural as it gets in this game.

Violence: Players use a variety of weapons to defeat fruit and vegetable based enemies. Some of the ranged weapons are real types of firearms, but shoot large projectiles which look nothing like real bullets. Defeated enemies leave puddles of juice behind which may seem like blood.

Other Negative Themes: The game’s premise is that plants have rapidly evolved into being more like animals. This is a very incorrect presentation on how the theory of evolution works, regardless of anyone’s personal opinions on it. The whole game is presented in a lighthearted tone, so it is doubtful any except the youngest players might think this is a realistic depiction.

Positive Content: Multiplayer and the narrative of humanity banding together against a common enemy both promote the idea of teamwork.

Rather than make you sit through any sort of drawn-out introduction, Juicy Realm drops you right into the action. Upon starting the game you will play through a brief playable tutorial. Here it teaches you the basic mechanics before throwing a few simple enemies at you. This highlights the best part of this game to me: it doesn’t try and justify its ridiculous premise. Juicy Realm just drops you in the jungle, makes you aware that all the fruit is trying to kill you, and says “Go.” 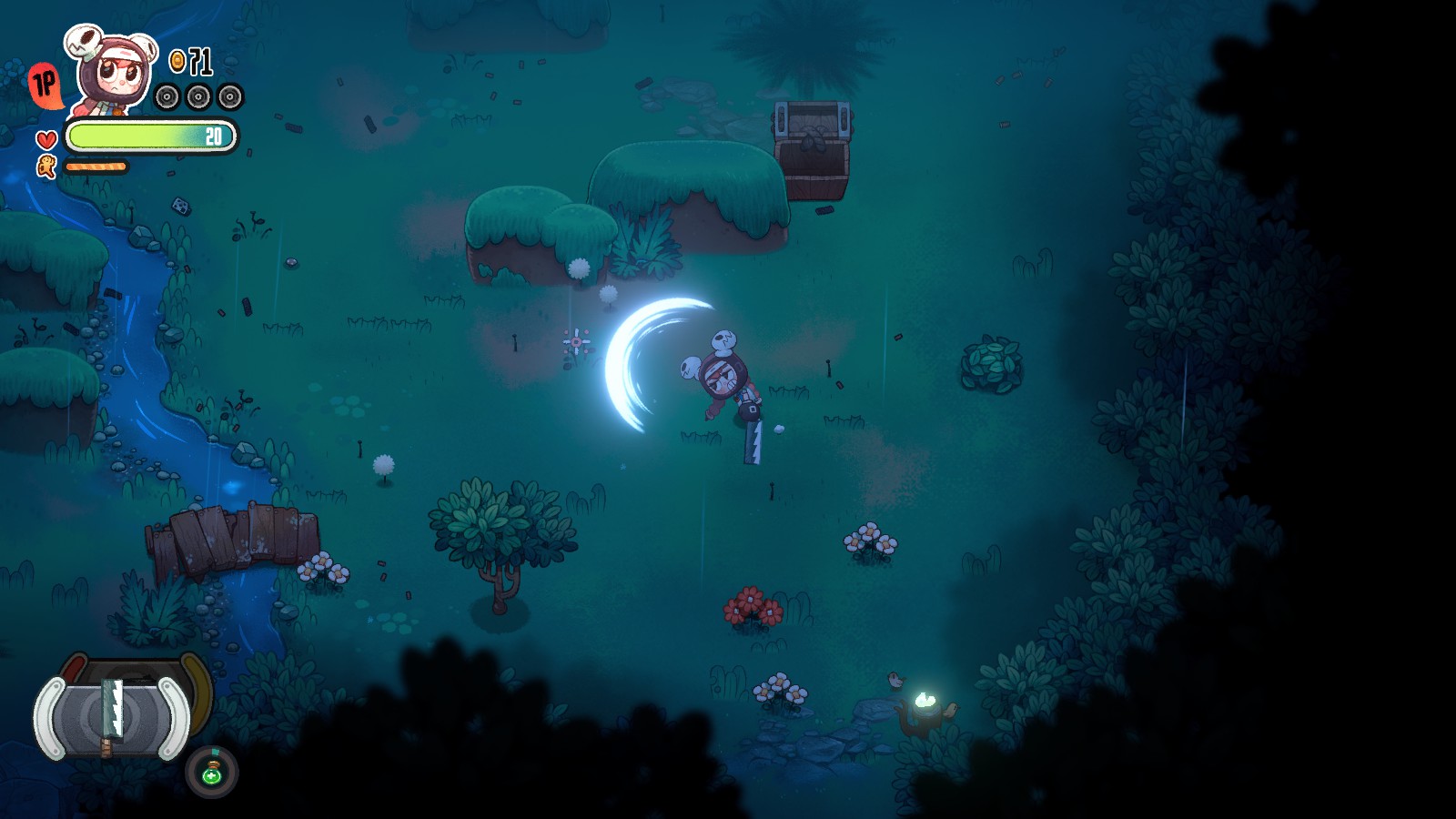 In this jungle, it’s slice or be sliced.

Upon completion of the tutorial you’re brought to the main menu, or “Camp” screen. Juicy Realm has an excellent aesthetic and uses it to full effect. The cartoon style is charming, and the exaggerated characters meld seamlessly into a fun, detailed landscape. Speaking of characters, you can choose from four, ranging from a bespectacled botanist to a walking reference to an outdated app game. You also have the option of local multiplayer. That’s a feature that’s getting rarer in games nowadays, so I’m happy to see it here. 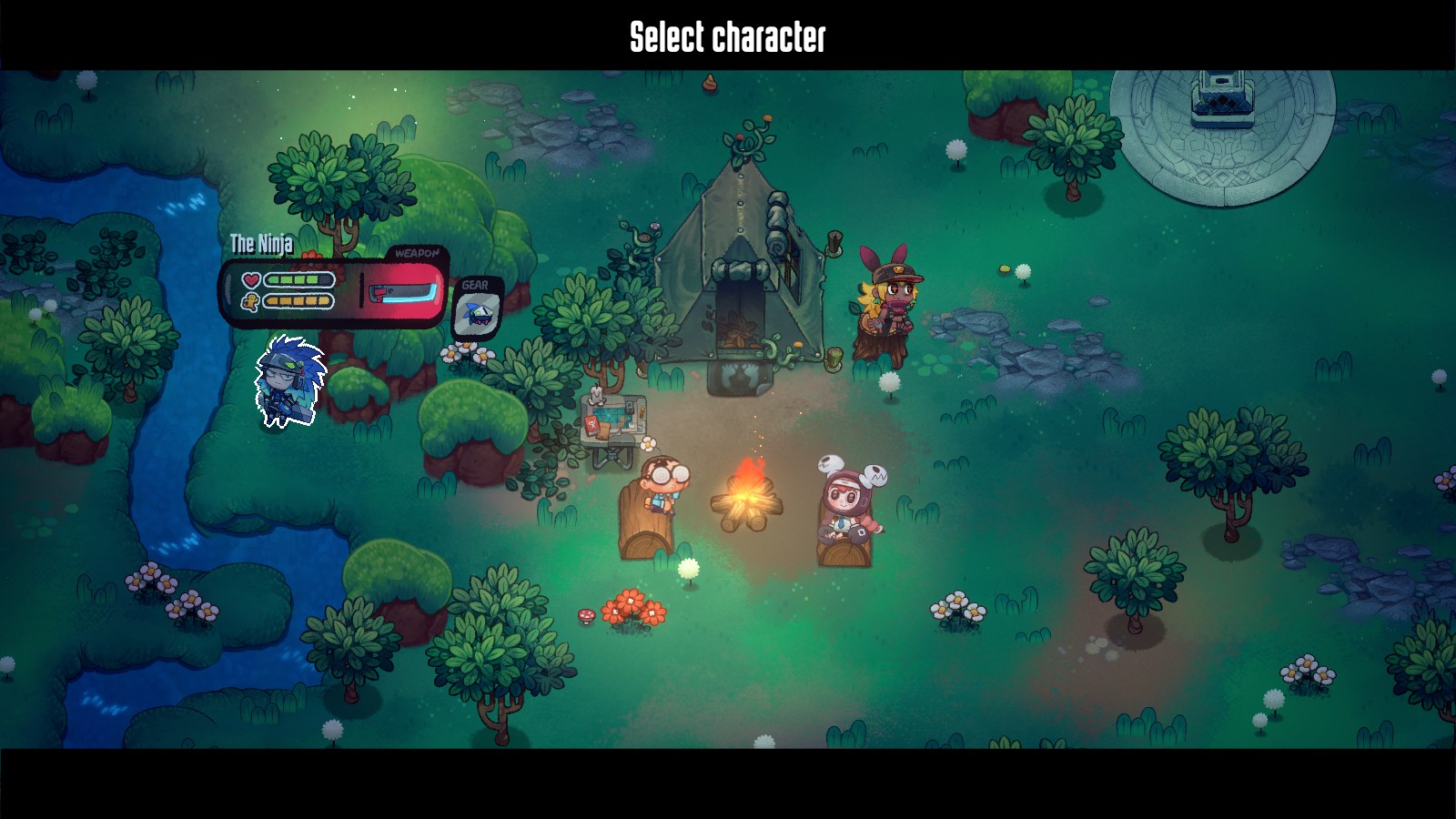 The differences between each character are largely superficial. They each have a different starting weapon, but with the possible exception of the ninja’s knife, you’ll likely end up replacing that at some point. They also each have a unique item or ability, and unfortunately there’s very little in the way of sense here. Why does the botanist have a grenade, while the boxer can drop a healing zone on the ground? The unique trait of each character isn’t really intuitive to their description.

Whatever complaints I have about the the characters, they aren’t enough to distract me from the true stars of the show, the enemies. Even in the first levels, you’ll have enough variety that you need to stay on your toes. Gun toting pears and apples are one thing. What about swarms of blueberries that will latch on and suck the life out of you? Or burrowing carrots that can only be attacked in a short window of time when they pop up to the surface? 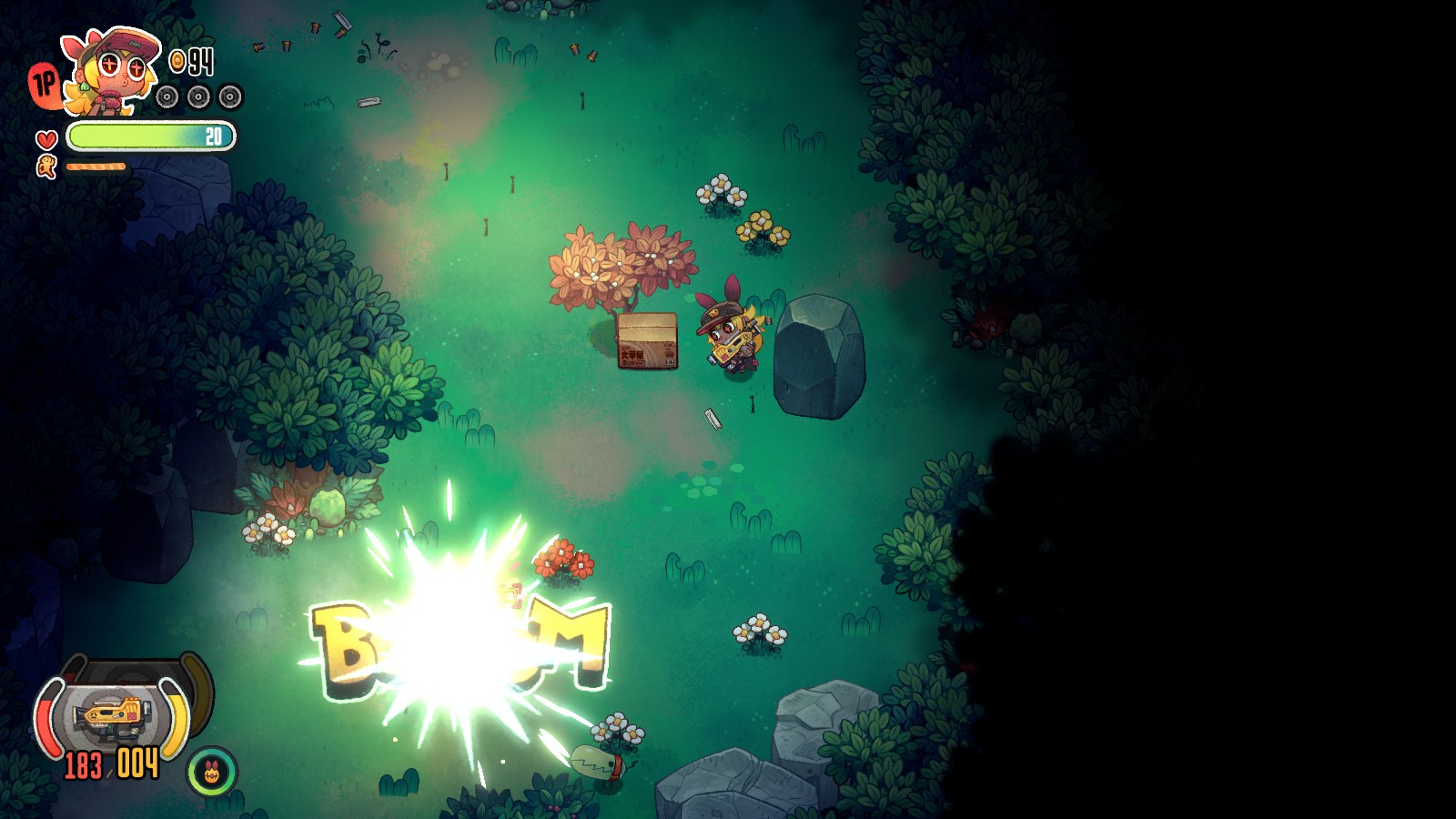 I love the smell of roasted fruit in the morning.

As the game goes on, the enemy design gets more inventive, sometimes to the point of obscurity. I’m still not entirely sure what fruit some enemies were supposed to be. But that aside, their designs were cute and fun to look at. Also intriguingly both the quality of the designs and the animations seemed to improve with each new enemy. I can’t say that’s a point against the game, but you might get bored with the earlier level’s apples and pears after you’ve faced a telekinetic fruit yogurt cup. 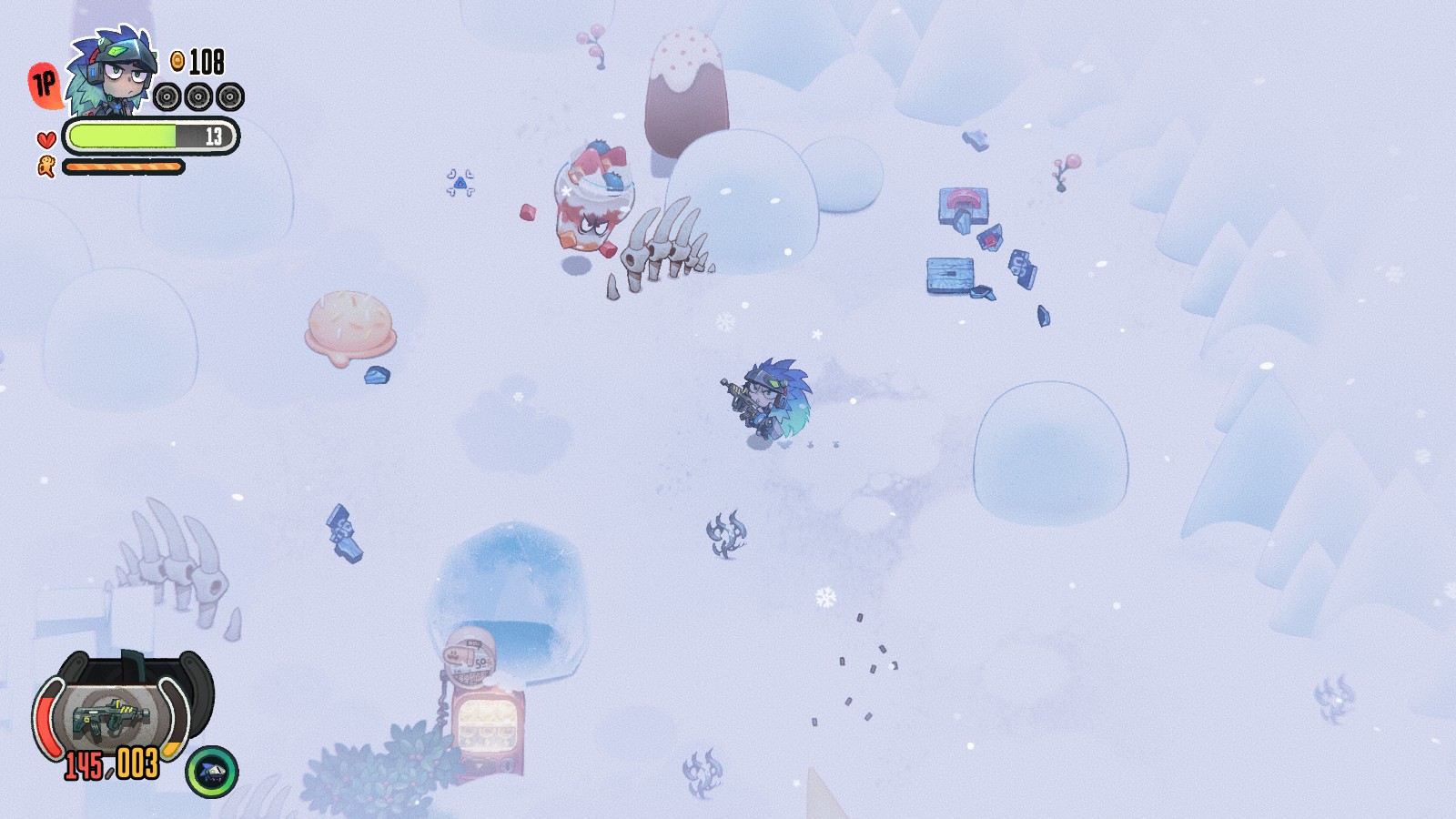 So is each fruit sentient on their own, or are they a hive mind, or…?

Gameplay is about what you’d expect for a two stick shooter, where you aim and move independently while viewing the action from a top down perspective. You can carry two weapons at a time, and weapon drops are fairly frequent so you’ll eventually find something you like. A large variety of weapons exist, both ranged and melee. Among them are the standard fair, revolvers and shotguns and knives. But as you progress you’ll find some unusual armaments, such as a baguette which is surprisingly one of the better melee weapons. And then there are the truly inventive weapons. What other game let’s you shoot discounts at enemies with the Steam logo? 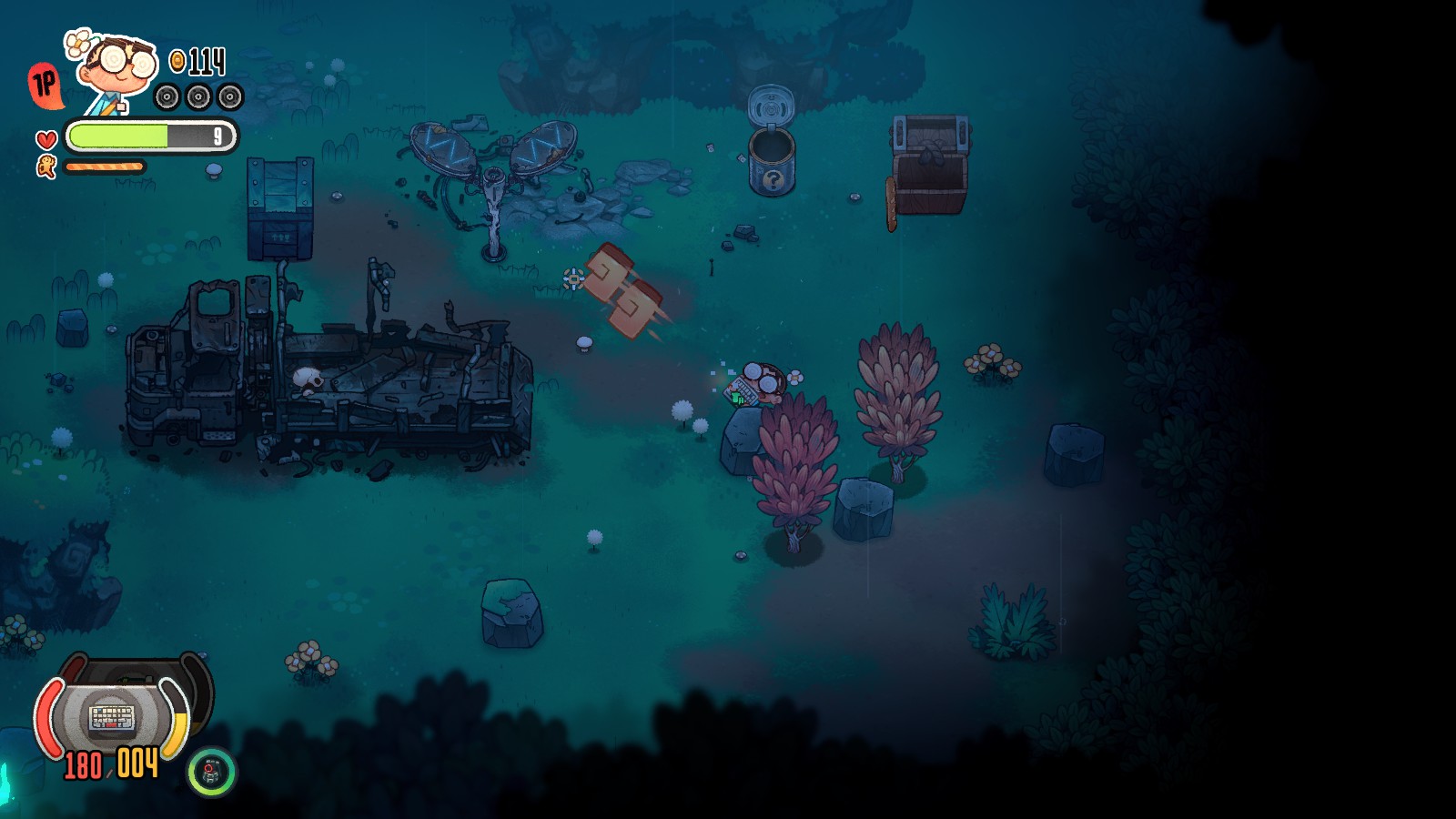 Taking the title “keyboard warrior” a bit far there

The game divides its levels up into zones, each sharing a similar biome. Each zone will have appropriate obstacles, from abandoned vehicles in the jungle to vision impairing storms in the desert and tundra respectively. You’ll have four random levels filled with enemies, then a boss for the whole area. Clearing a level by defeating all the enemies present opens up the path to the next one, as well as giving you a chest that could contain a useful item or money. Boss levels will also have someone there you can save and bring back to your camp. Doing so will allow them to aid you on any subsequent playthrough. Though in true video game fashion, you’ll have to pay for their services.

While enjoyably silly and sometimes even skill challenging, Juicy Realm does suffer from one major flaw: repetition. Where other roguelikes procedurally generate their levels, Juicy Realm draws them from a pool of limited pre-drawn maps. It’s enough that you’ll be fine for one playthrough, but on later ones you’ll definitely be seeing the same layouts over and over again. Unfortunately the weapons aren’t much better. They each look and sometimes even sound different, but sadly there often isn’t much difference between shooting an enemy with bullets as opposed to steam sales except one finishes the job faster. 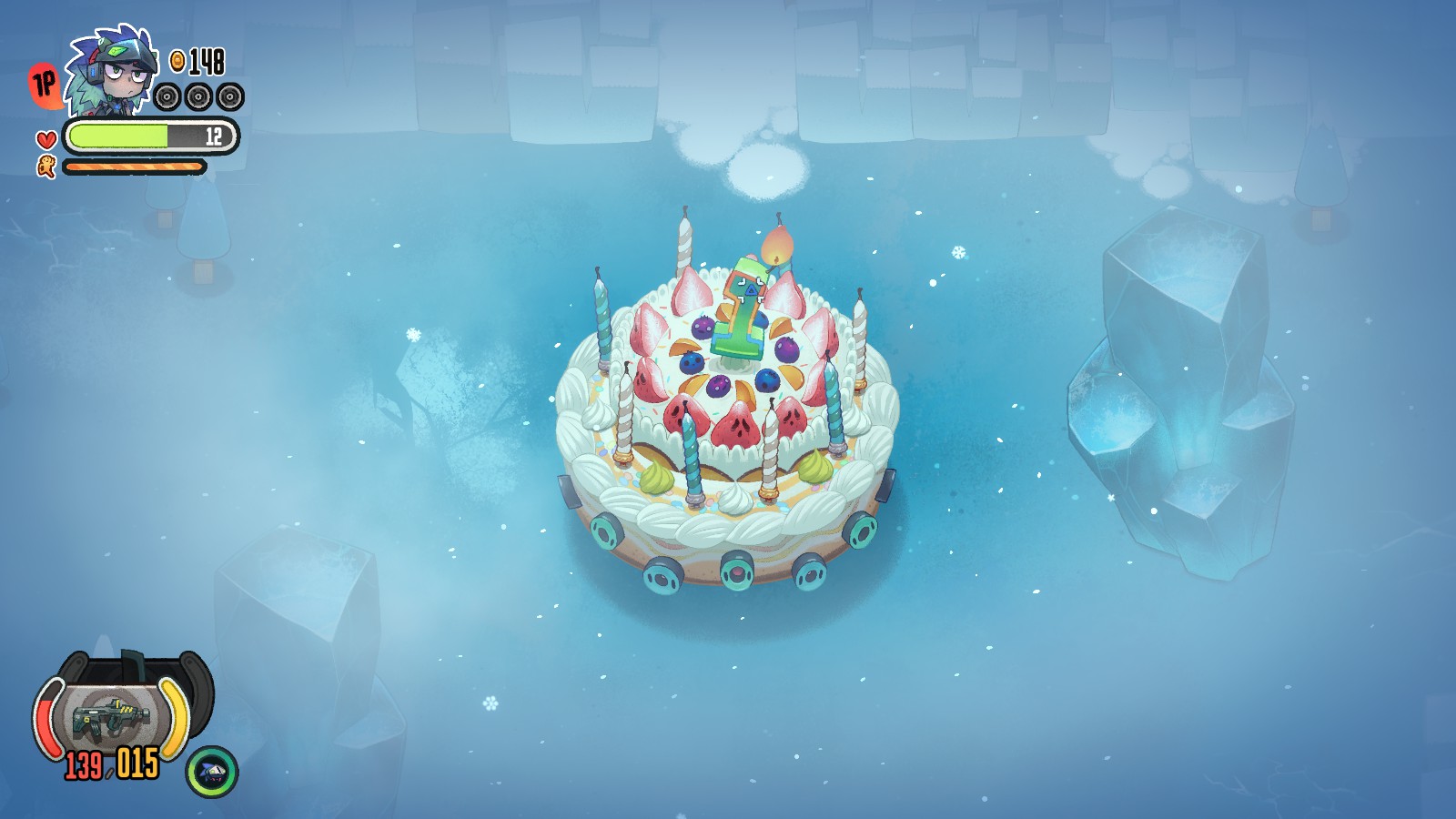 Still, how many games can you say you’ve fought a giant fruit cake in?

Ultimately, whether you’ll want to invest in Juicy Realm comes down to how much you enjoy its goofy premise. If you need a long or varied game experience that will last you for over an hour, this might not be worth the double digit price for you. However, if you’ve ever wanted to take a baseball bat to a whole lot of fruit and not get dragged out of the grocery store by police afterward, you might just be able to enjoy Juicy Realm for what it is a while longer.