Review: Just Cause 4 (Xbox One) 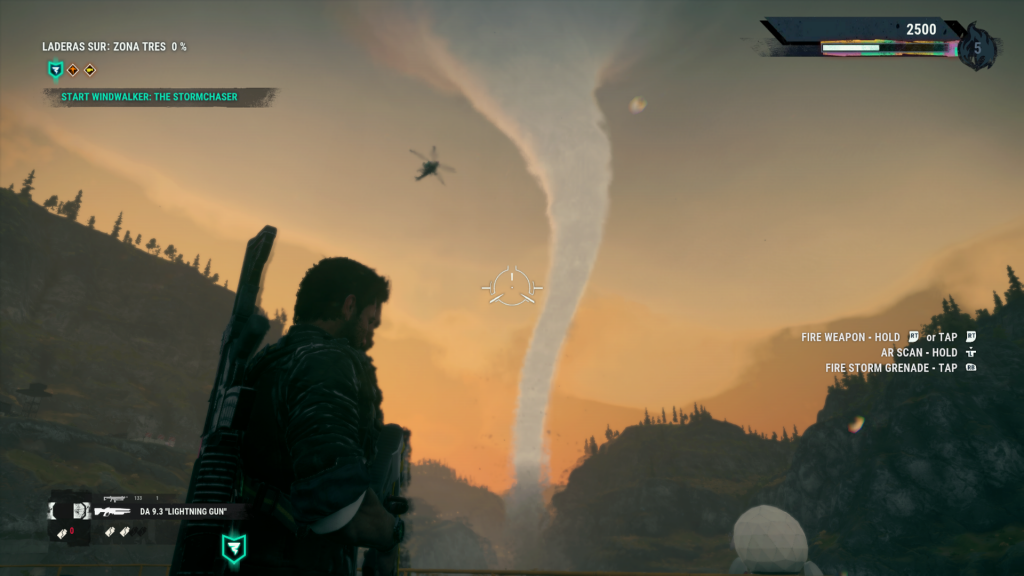 In Just Cause 4, protagonist Rico Rodriguez takes his talents for toppling dictators down to the fictional South American country of Solis. There, he clashes with familiar cannon fodder enemy the Black Hand, and Oscar Espinosa, who enforces his rule with his private army and weather machines. These devices are new to the series, and Rico will now have to contend with wild tornadoes, lightning storms, and blizzards. Read on to see if the game is able to weather the storm, or if it’s just a cold front passing by.

Language: Rico frequently mutters, “S***” in-game and in-cutscene. Other NPCs say similar curses, and use the F-word in various fashions. If it was a movie, it would get a “R” rating on language alone.

Violence: Players can use all sorts of real-world-inspired and fantastical guns to kill, blow up, or destroy enemies and civilians. The game makes no mention of any issues or penalties for attacking innocent people. Also, players can use Rico’s grappling hook to attach anyone to other objects, or balloons, or soon-to-be-exploding gas tanks.

The time I found the Wind Gun is indicative of my overall experience with Just Cause 4. I had just finished a lengthy mission at a car factory, when I came across a weapon cache containing the Wind Gun. Thinking it might not do much, I pointed it at a few boxes, which it blew out of sight with a satisfying, “Ffwoom!” I then gleefully ran around the factory, literally blowing away enemies, cars, metal shipping containers, and anything else not nailed down. A minute or two into my spree I ran out ammo, and looked around to find more. I couldn’t find any. I then looked in the menus for how to unlock the ability to call in the Wind Gun via supply drop, and found that there were two regions I had to unlock first, and a mission I had to do before I could unlock either of those. After jumping through those hoops, then the map told me I couldn’t unlock the last region until I did the final mission. All that extra work towards unlocking a gun I had just grown to like, but wouldn’t be able to get again until I’d finished the campaign. 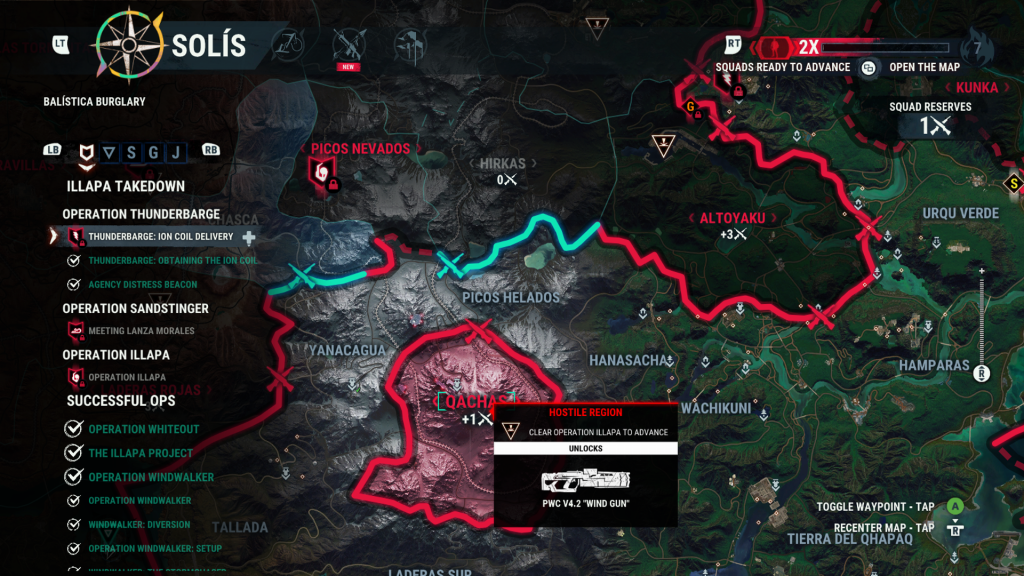 I tried to think of a good metaphor for Just Cause 4, and the best I could come up with is it’s like playing the Saran Wrap ball game, but instead of good prizes each time, sometimes the prize is another escort mission, or more busy work, or you have to fly halfway across the island for the next mission. More than once in the middle of a mission I had to re-do objectives because the enemy had deployed signal jammers, or reset something, which just padded out the gameplay. JC4 has a lot of fun, but it’s also wrapped up in not-fun or confusing stuff. For instance, the decision to give Rico an AR lens to explain how he knows where things are and how far away was an unnecessary change. It took me around 5 hours to realize my waypoints would still tell me distance if I pushed and held down on the left stick. It worked great in Just Cause 3 to just set a waypoint and you’d know how far away you were; I’m not sure why they “upgraded” this. 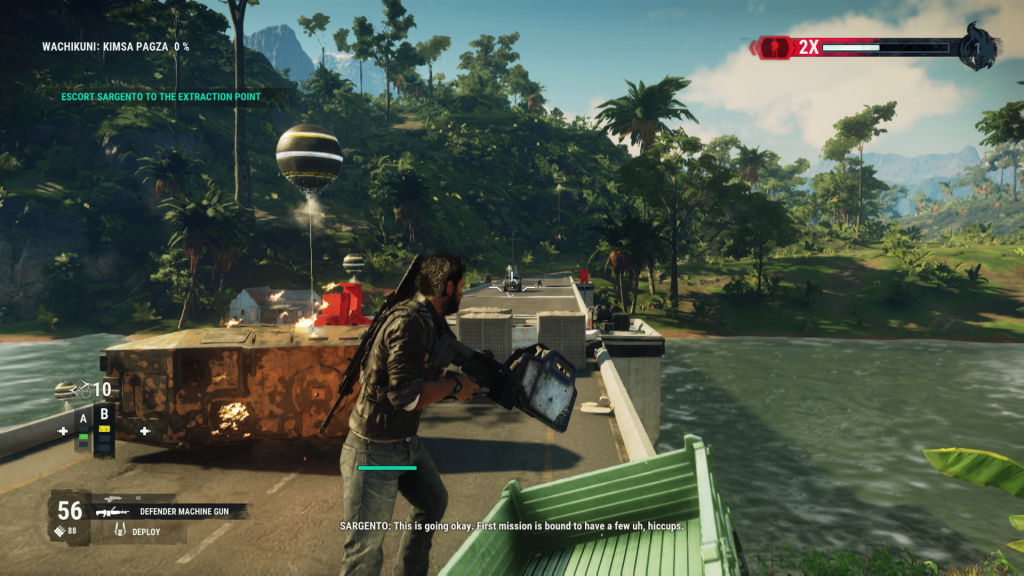 As far as the base gameplay goes, if you played any of the recent games in the series it’s more of the same—some of the random pop-up missions seem to be lifted directly from Just Cause 3, with no change whatsoever (“Steal the VIP’s car and drive off a cliff” showed up often). The main missions in JC4 lead you to disabling Espinosa’s different weather machines, but the buildup is so involved it takes hours before you’ll get to see a runaway tornado or lightning storm in action. Truly, the mission where Rico follows the tornado into the city is a memorable and eye-candy-filled set piece, but it’s over far too fast. JC4 also deviates from its predecessors in that it really isn’t a fully “Open” World game. It drops you in a province and tasks you with building up your Chaos meter (similar to past games) to then unlock Squads of soldiers (wait, whut) to unlock new provinces and regions. You can’t unlock a new area that isn’t right next to your front line, and some areas can’t be unlocked until missions have been done inside them—which is frustrating since you can’t fast-travel to locked regions either. In past games you could go anywhere and unlock new gear and areas in any order you saw fit. 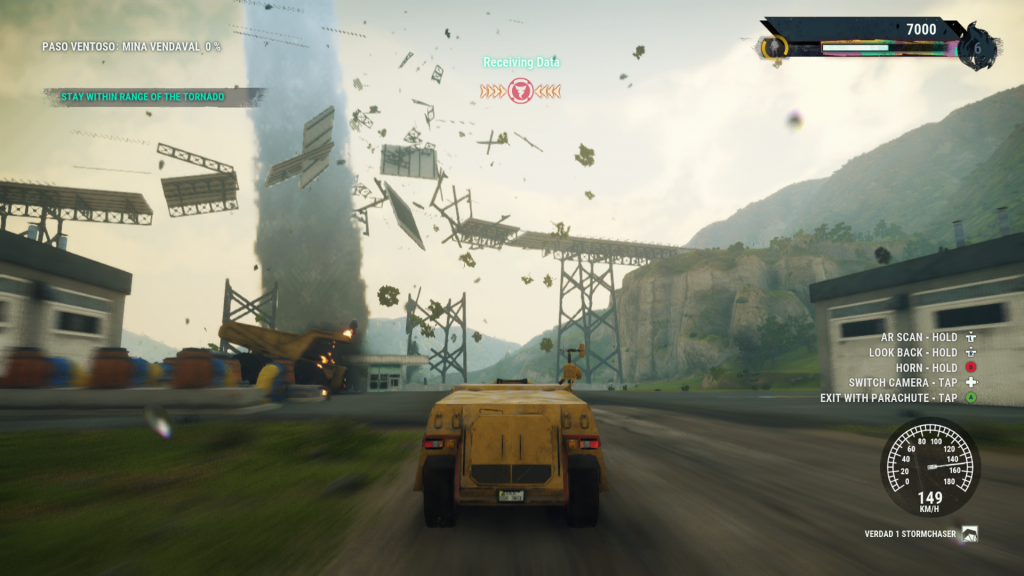 This mission was amazing. Unfortunately it was over just as quick.

Also, for you completionists: I got really confused in the first area where I went to cause trouble. After blowing up all the enemy structures (marked in red since Just Cause 2) I still only had 0.0% completion for that area. For some odd reason, they divorced blowing stuff up from the completion percentage for a given area. Now to 100% an area, you have to complete all the side missions there, whereas in games past side missions were only for unlocking gear or money. So since it doesn’t help you finish areas, blowing up stuff can start to feel like a grind as you push to get your Chaos bar filled. And instead of feeling like fun distractions, side missions feel tedious since they’re the only way to 100% an area. I started ignoring them and just focusing on unlocking new regions. 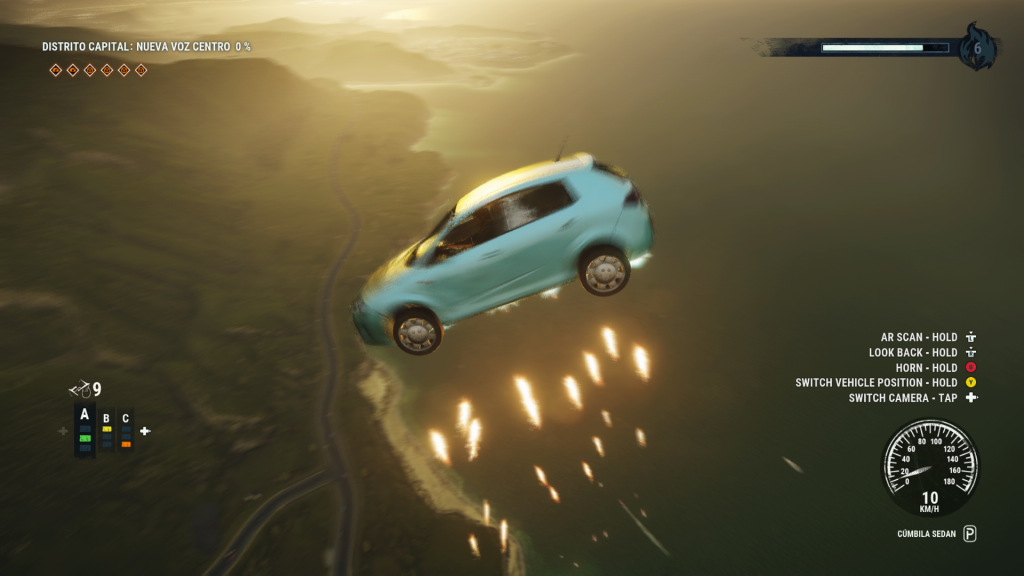 In case you were wondering, yes, you can still put a small passenger car into low-Earth orbit with booster rockets, and survive the fall back to the ground. And yet, if you bail from a car going 60 mph on the ground it explodes in a fireball…

My final gripe at JC4 is that it feels like a Bethesda or Rockstar game when it comes to bugs. Motorcycles bounce like they have some Flubber mod; passenger planes make odd, last-second vertical takeoffs; helicopters are broken or smoking on the platform from spawning; pedestrians walk endlessly into walls hoping to escape. In an open world game with so much code going on, odd things are bound to happen, but instead of coming off as charming as some bugs do, these just added to the narrative that this was a rushed and unpolished sequel. 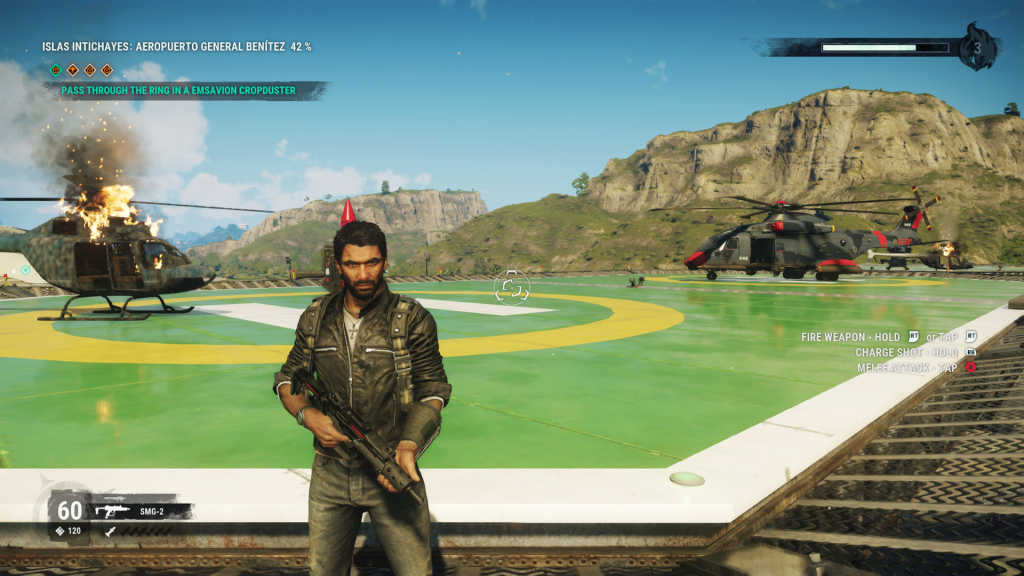 Seeing broken and smoking vehicles is normal for a Just Cause game, but these ones spawned that way. I SWEAR, officer, I never touched that helicopter!

Even if you came into JC4 without ever playing a game in the series, you would take issue with it. Yes, they made some cool additions with the balloons and fantastical weapons like the Lightning gun or Wind Cannon. But they also simplified parts of it to the point of banality, while needlessly complicating others. For instance, who thought it was a good idea to move the booster/remote charge to the grappling hook, and get rid of grenades? Games that last this far into their series have a steep hill to climb, but I doubt anyone’s wish list for Just Cause 4 was, “More of exactly the same, but more tedious, and with a James Bond super-villain!”  My suggestion: Rent it, or better yet get Just Cause 3 and it’s DLC. You’ll have more fun and save about $40. 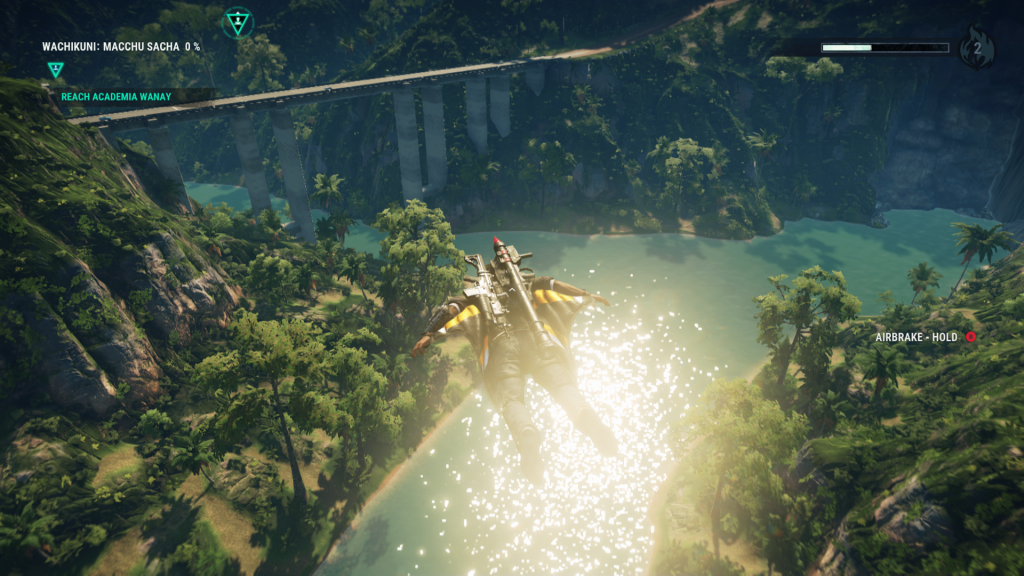